Earlier this year at SIHH, Audemars Piguet unveiled a watch that is the epitome of top-notch craftsmanship both inside and out: the Royal Oak Frosted Double Balance Wheel Openworked. For this watch, Audemars Piguet pulled out all the stops, combining one of the brand’s most beautiful and technically advanced calibres with a remarkable Frosted gold finish. 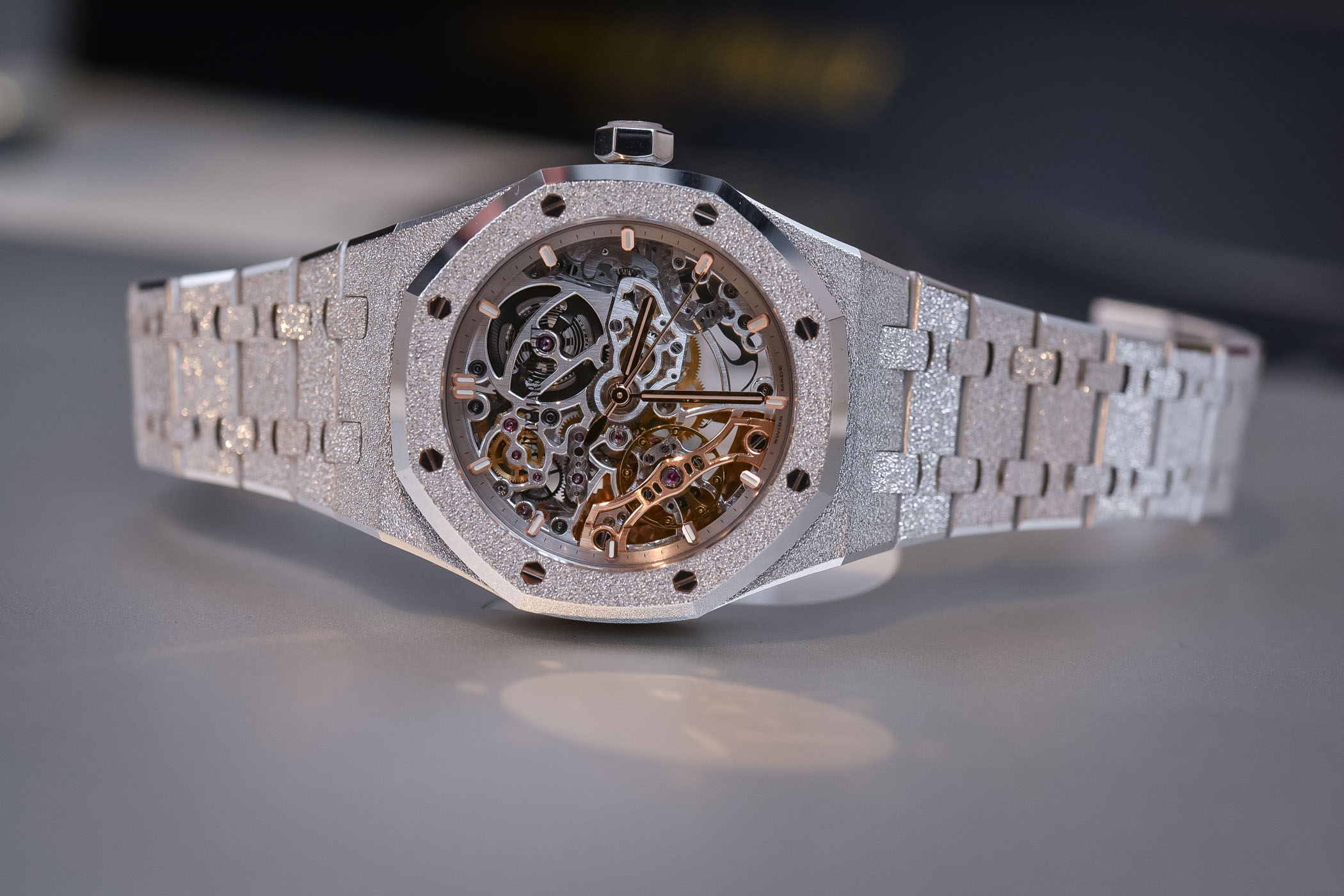 Before we delve into all of the details on this watch, we want to mention one key point: it is 37mm in diameter – making it a perfect size for women. However, for men who enjoy a reasonably sized watch and a lot of shimmer, it could also work (Managing Editor’s note: yes, it does work for men too!)

As mentioned, this watch is an amalgamation of several things Audemars Piguet does right. The first of which is watchmaking precision. The timepiece houses the complex patented Caliber 3132. With 245 parts, this in-house-made movement was first unveiled to the world two years ago, and fast became a favorite of collectors. Whereas Audemars Piguet’s previous skeleton watch had only one balance wheel and balance spring, the new self-winding Caliber 3132 features two balance wheels and balance springs separated in height, but on a single axis. 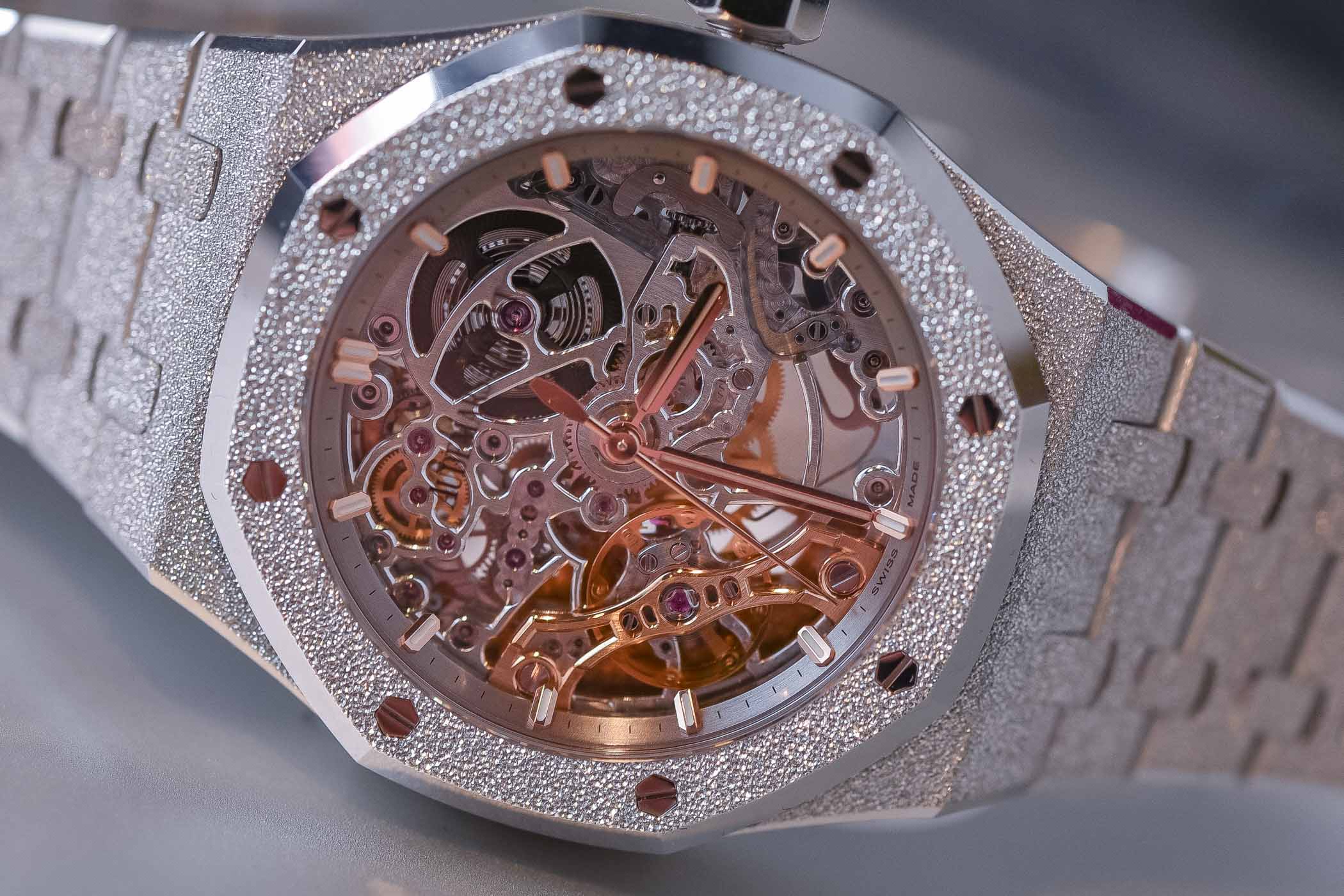 The objective in the making of this movement was to improve stability and precision, which it did. However, the technical procedure also has a visually appealing side effect: the balance wheel and spring are separated in such a way that one is visible from the dial side via the glare-proof sapphire crystal, and the other is visible from the caseback via another glare-proof sapphire crystal. I love this look.

It is structured as though the multi-layers are intended for aesthetics, when, in fact, it was a by-product of the architecture of the movement. If you want to know more about the technical aspects of this movement and the surprising story behind its creation (explained by CEO François-Henry Bennahmias himself), take a look at our in-depth video here. 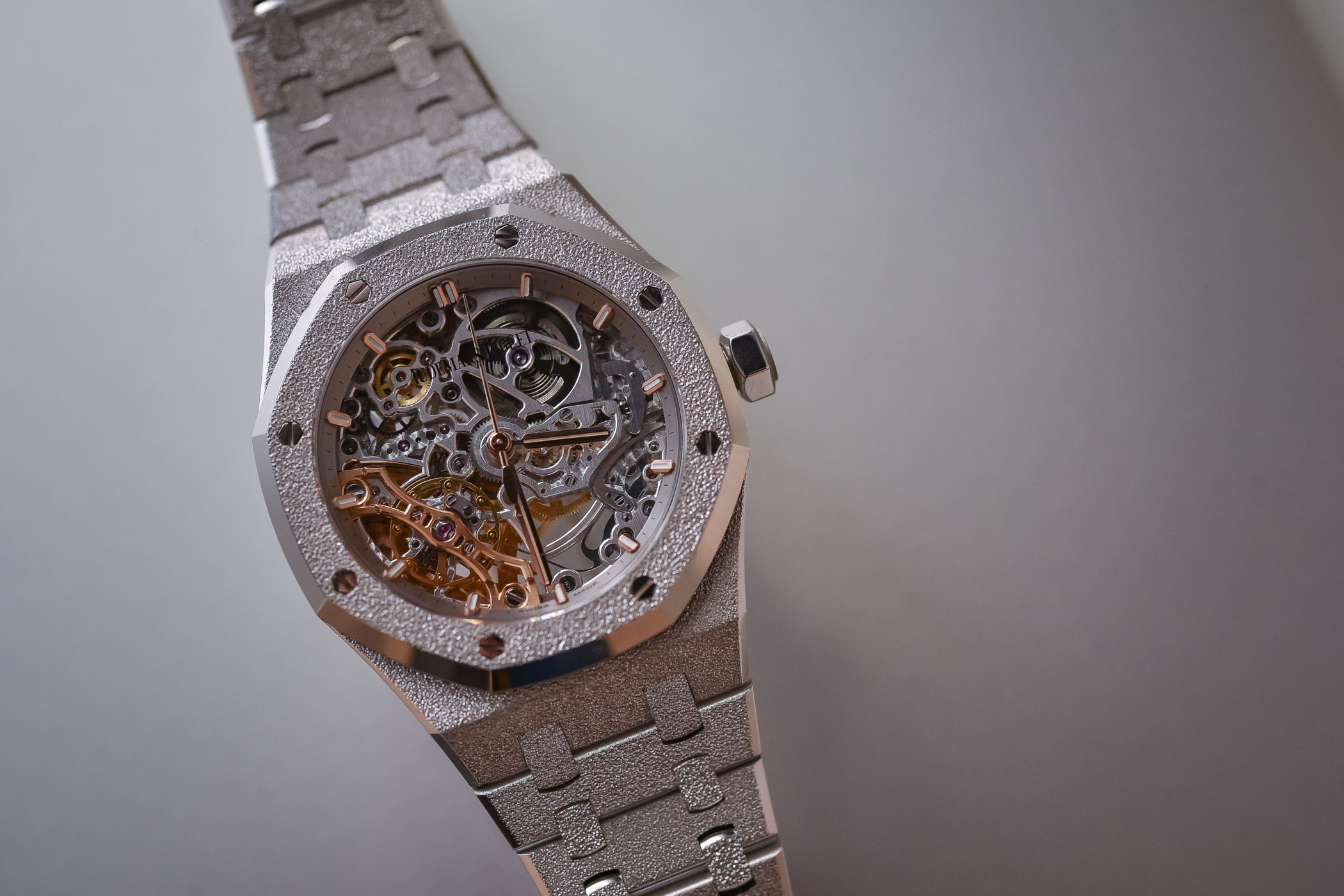 Naturally, each component of the Double Balance Wheel Openworked movement is finely decorated to achieve optimal skeletonization and dramatic detail – think hand-polished sharp angles, bevelled bridges, straight-grained flat surfaces. Initially, two years ago, this movement was placed inside a 41mm case. Now, with the newest 18-karat white gold Frosted version, it is housed in a 37mm case – making it much more versatile for wear.

The Art of Frosted Gold

While the inside of the watch is a work of technical mastery, the outside is a work of hand-finished art.  The case and the entire bracelet features what Audemars Piguet calls Frosted Gold. In fact, that gold is hand hammered to achieve an unparalleled, shimmering look. 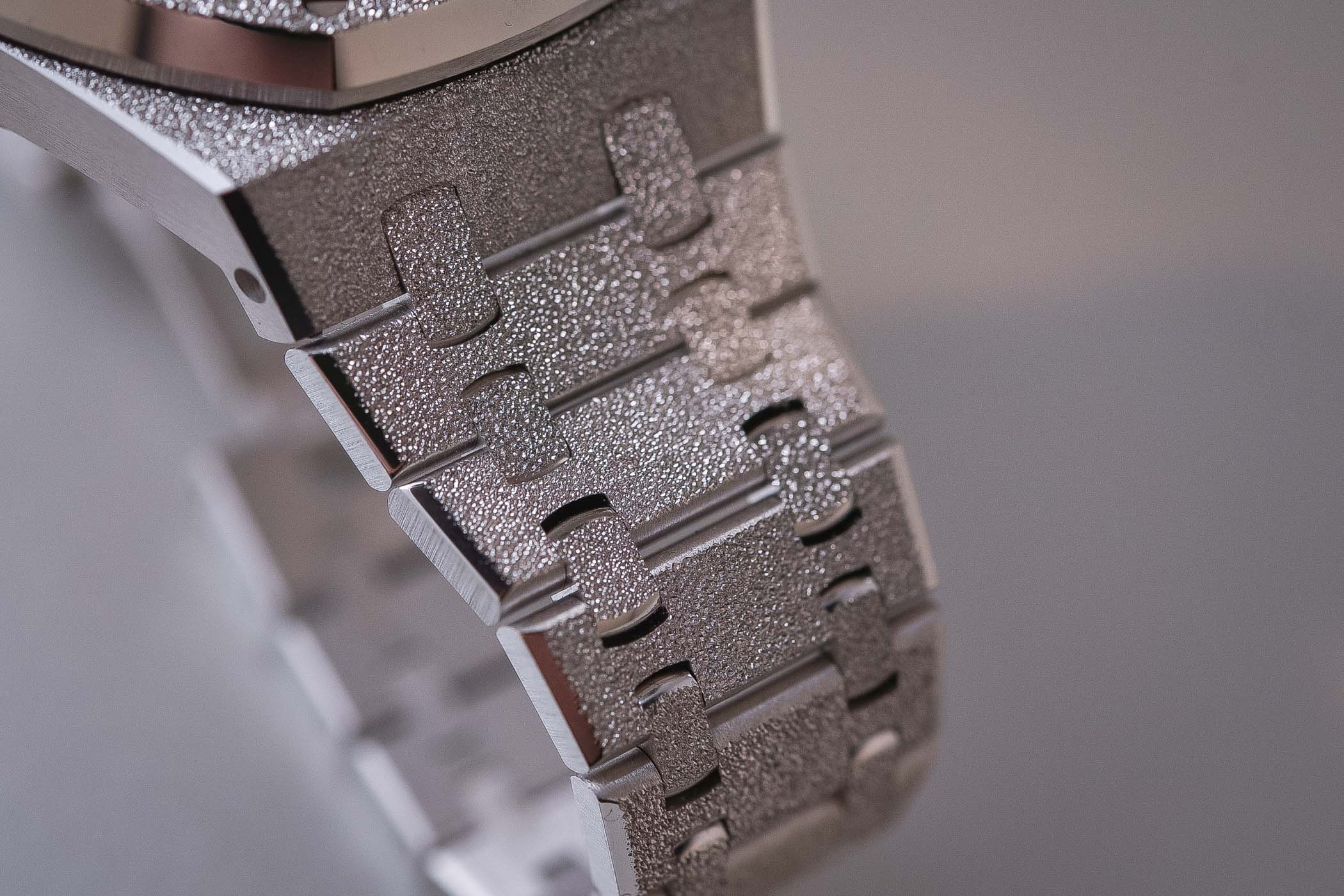 The Frosted finish was introduced first by Audemars Piguet in 2017, for its 40th Anniversary of a women’s Royal Oak. The anniversary watches featured a Frosted Gold finish created by Italian jewelry maker Carolina Bucci. She turned to a centuries-old Florentine technique of hammering gold and literally makes every indentation by hand using a diamond-tipped tool.  The result is a shimmering “frosted” look that glistens differently with every turn of the wrist.

Truth be told, for me, this watch is a bit too shimmery, and while the shimmer belies the brilliance of technology, I personally would prefer the non-hammered 18-karat rose gold 37mm model. However, the end result of the combination of interior superiority and exterior eminence make the new 18-karat white gold Audemars Piguet Royal Oak Frosted Double Balance Wheel Openworked watch a winner…  as long as you have USD 76,000 for it. The watch will only be sold through Audemars Piguet boutiques. More details on www.audemarspiguet.com.