If you are looking for a vintage-inspired dive watch, the world is your playground. Especially since ambitious young watchmakers and marketeers heard about Kickstarter, new watch companies with old watches keep on popping up. One of the first out there was Aramar Watch Company, founded in 2010 with Kickstarter-funding and a nice vintage-inspired watch. Now, it’s back… with a dive watch. Meet the Aramar Walrus. 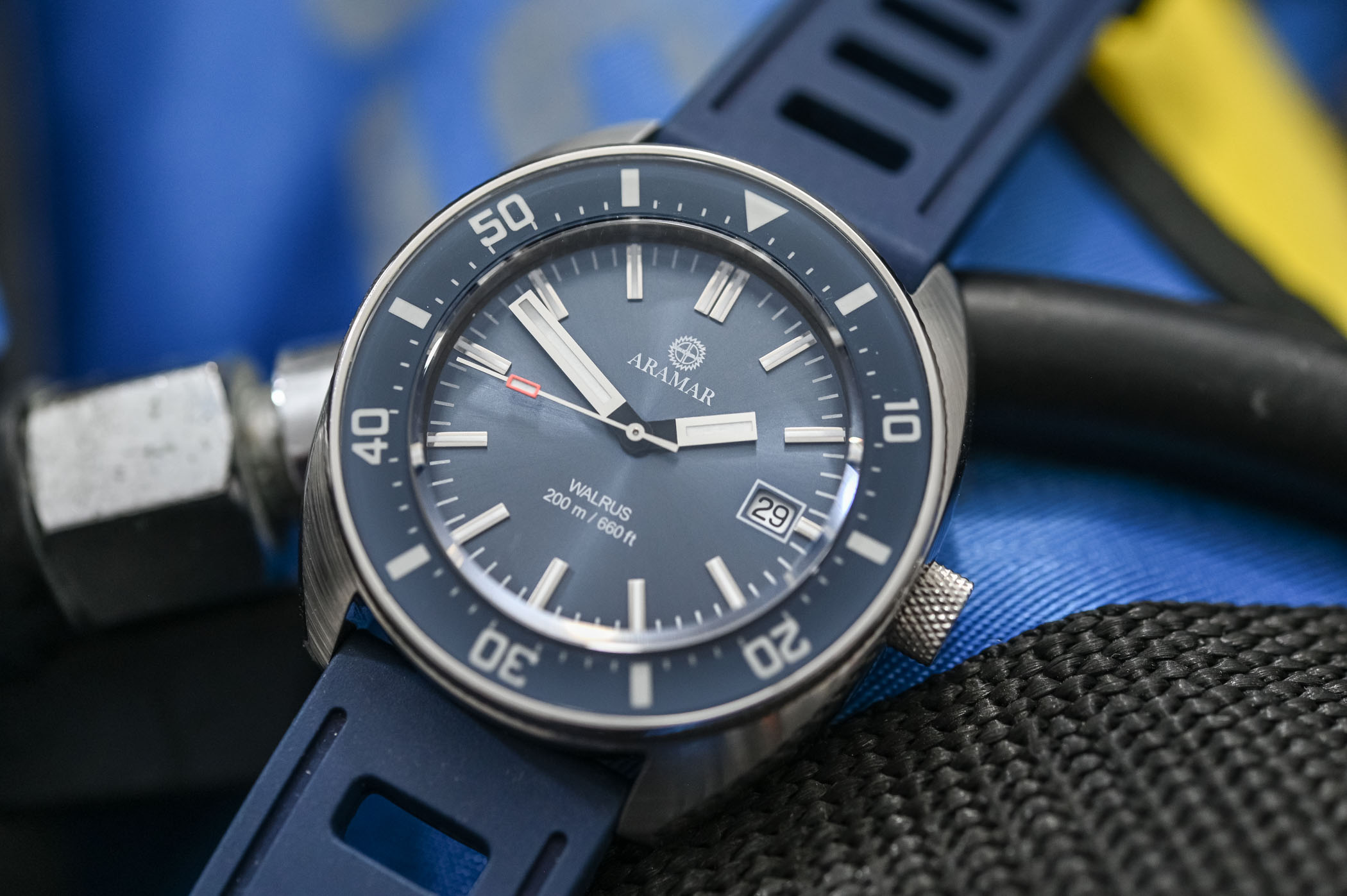 Once upon a long, long time ago, the Royal Netherlands Navy reigned the seas. Nowadays, it has only a handful of vessels and four submarines of one single class called De Walrus. Why exactly it is named after a fat and not-too-good-looking mammal that doesn’t live anywhere near the Dutch coasts is not entirely clear, though. Neither is the real function of these subs, as the Dutch government very rarely discloses their locations. Supposedly, they spend most of their time on peace missions or on drug hunts (although you don’t need a submarine for that – just stroll the streets of Amsterdam). 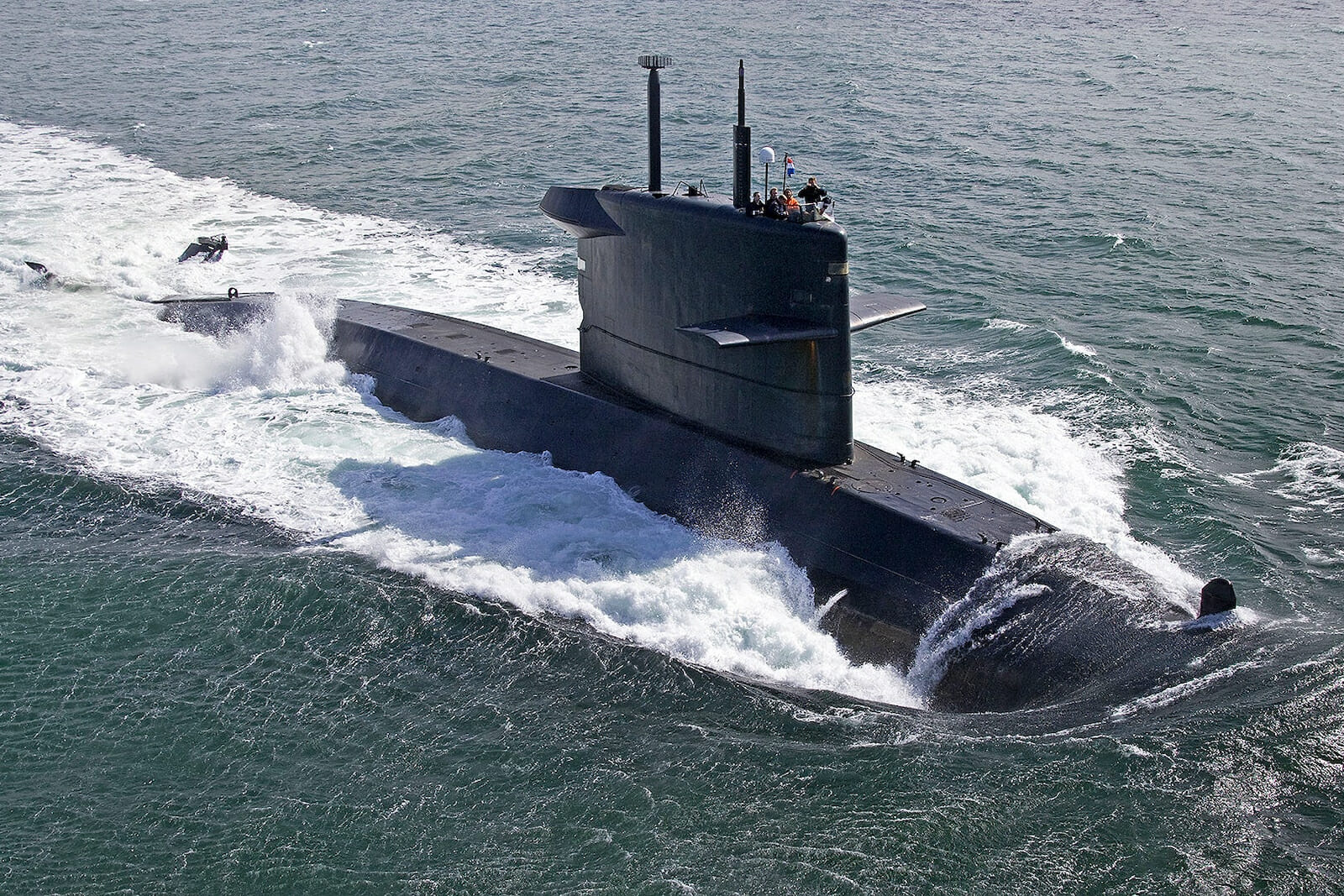 At first glance, the only thing more illogical than calling the saviours of your country after a fat lazy sea cow is calling your watch after it. Of course, the guys at Aramar have a different version of this story. As they told us, this ship is considered one of the most advanced non-nuclear attack submarines in the world. “We already had this name on our shortlist, but we knew we had a winning name when we read that the HLNMS Walrus, the ship that gave the class its name, managed to sink the US Navy Nimitz Class Aircraft Carrier Theodore Roosevelt! Well, during an exercise. Which is even funnier if you consider president Roosevelt was of Dutch descent.” Not too sure how that story will go down on the American market…

Anyway, enough naval lessons. To the watch. What we have here is a 1970s-inspired cushion-shaped 40.5mm steel case that is water-resistant to 200 metres. The Aramar Walrus is powered by the well-known Swiss-made standard grade ETA 2824-2 self-winding movement, with 38-hour power reserve. It has 25 jewels, Etachoc shock absorber and the balance runs at 28,800vph (4Hz). 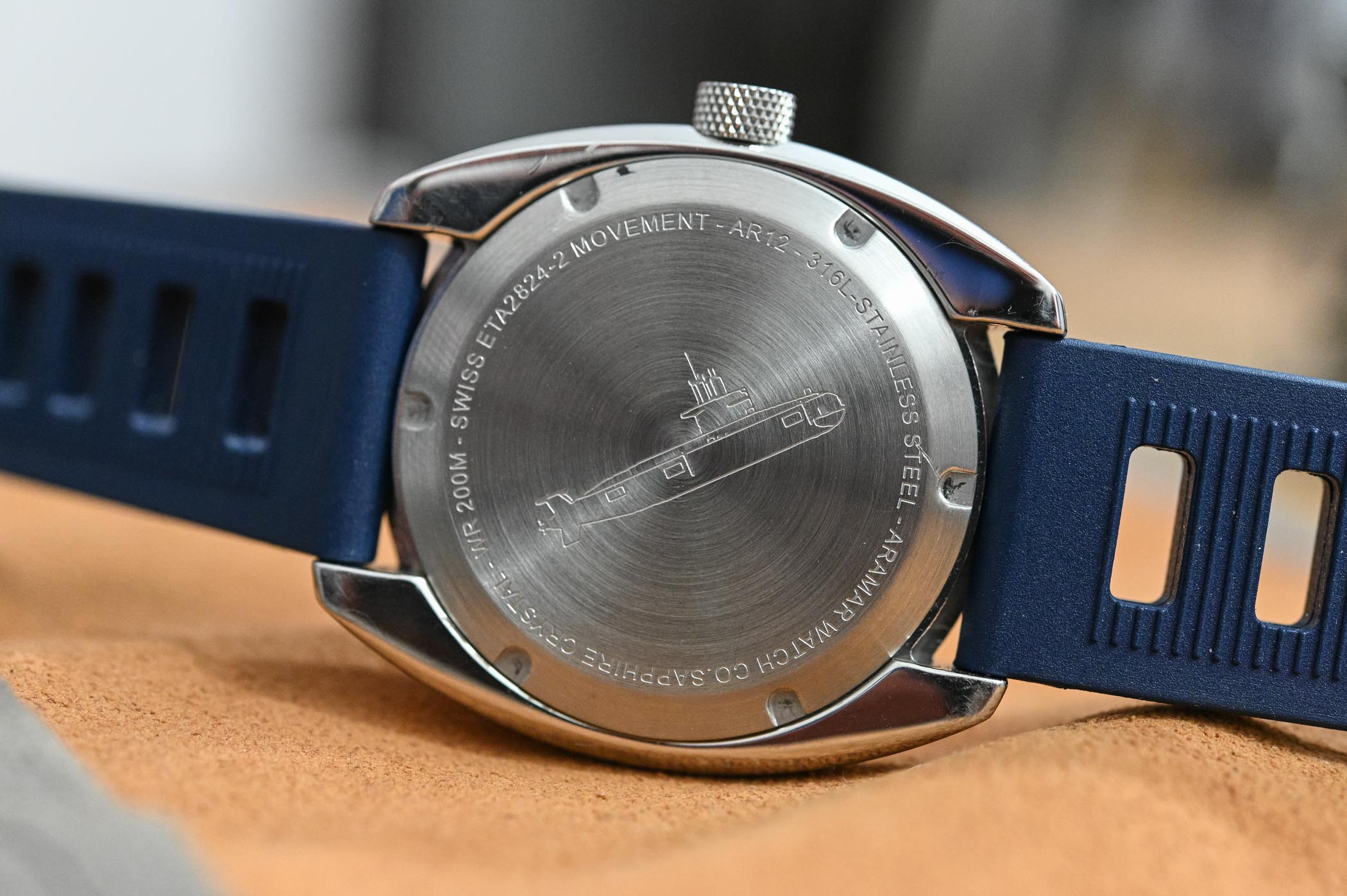 The solid steel caseback has an engraving of a Walrus-class Submarine. Aramar is proud to point out it has a master watchmaker on the team. Every watch will be inspected before delivery and if there are any warranty issues, the watchmaker will be able to fix the problem in-house. This particular service is what distinguishes Aramar from some other young Kickstarter watch brands. The custom-designed, 6.5mm diameter screw-down crown is located at 3 o’clock.

The Aramar Walrus is clearly vintage-inspired but doesn’t feel like a rip-off. The design is actually quite fresh and clearly made with a lot of knowledge about watches. The design has enough new inspirations to be considered modern. The hands, for example, are straight and paddle-shaped, but without the little tip as a pointer. Of course, they are filled with Super-LumiNova. The indices are applied and are also filled with lume. 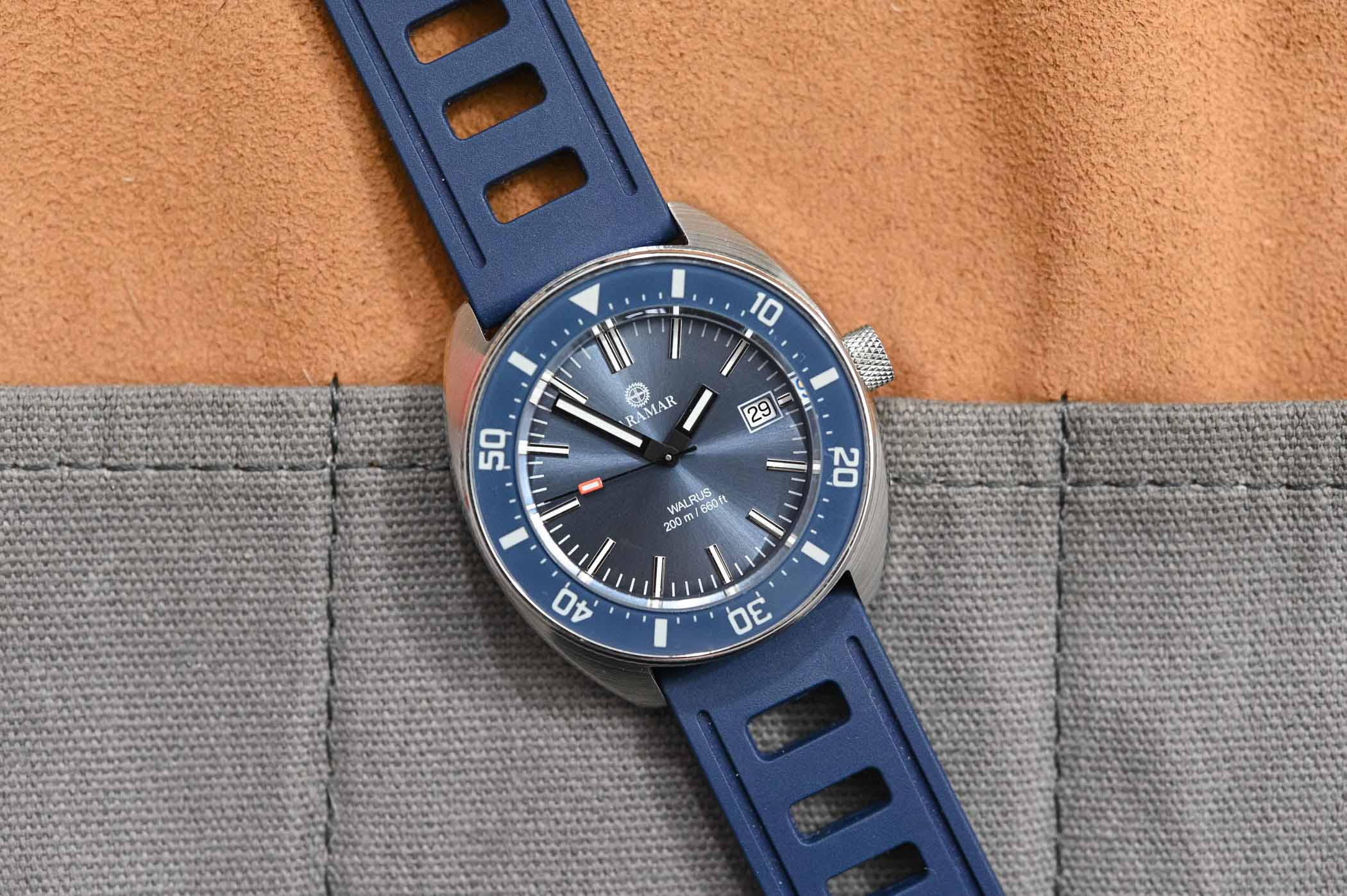 One more nice example is the recreation of the classic look of the vintage bakelite bezel. Aramar chose a bezel inlay made out of sapphire. With this material, it managed to recreate a visual effect which is almost the same as a bakelite bezel yet with scratch-resistance. 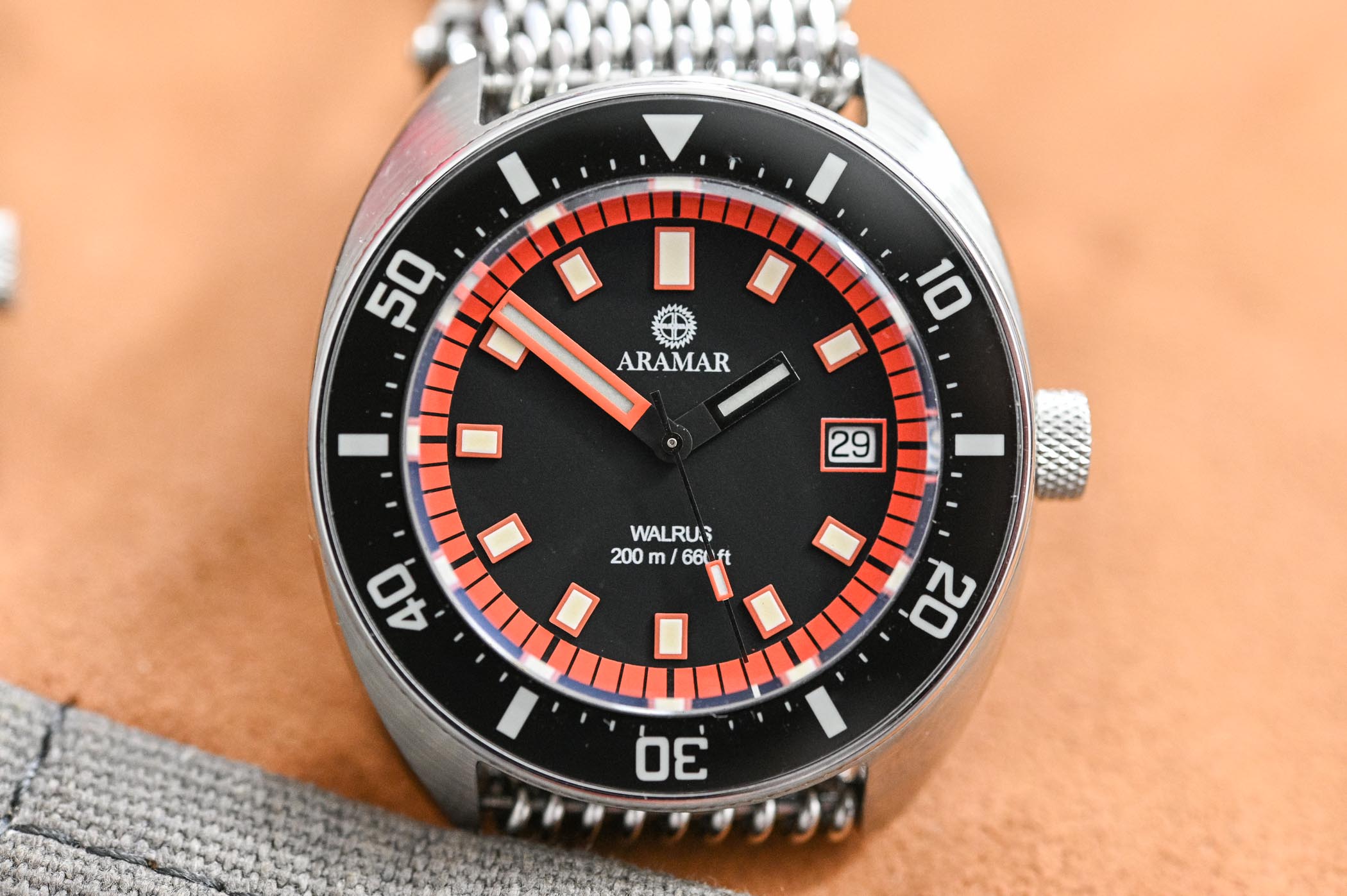 Another example is the crystal, which is made of boxed sapphire with a bevelled edge that rises up 1.2mm over the bezel. The crystal has an anti-reflective coating on the inside of the glass. By using this type of sapphire crystal the watch has got the look of a vintage dive watch.

There are two different possible colour schemes for this model. The Walrus Orange is the most seventies of both choices. Not only does the cushion shape give it that impression, but the mesh steel bracelet also amplifies it. The diver-styled black dial has orange applied indices filled with Swiss C3 Super-LumiNova and an orange ring around the dial. As the makers told us: “the design of this dial is inspired by famous vintage diving watches like the Zenith Defy A3637, Edox Hydro Sub, Enicar Star Diver, Zodiac Sea Wolf, Tissot Caroussel, Tissot PR516 Electronic and the Girard-Perregaux Gyromatic Deep diver”. 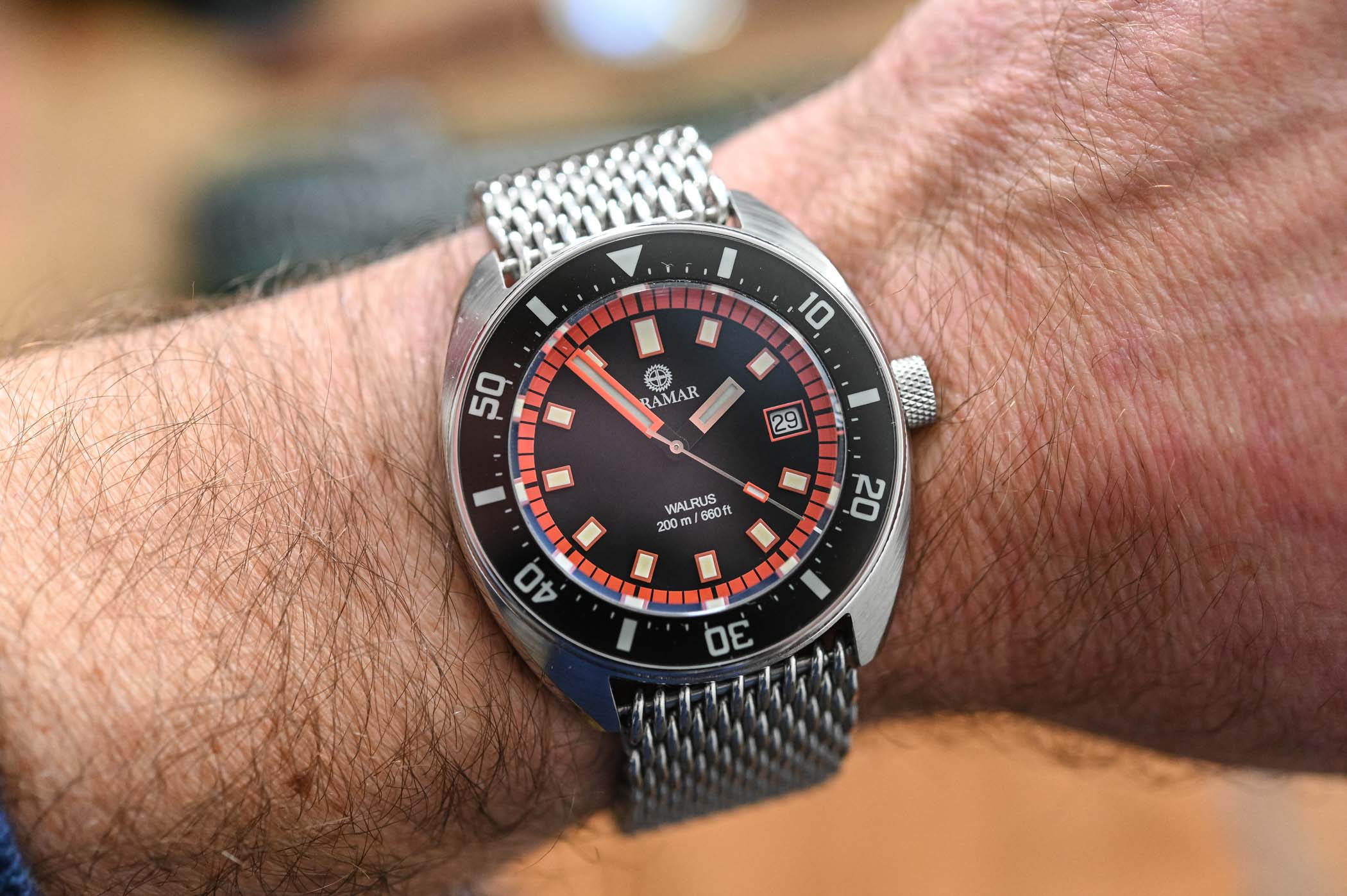 The second version is called the Walrus Blue and has more luxury design cues, such as the midnight blue sunburst dial with applied silver baton markers (with Super-LumiNova filling as well, obviously). This version comes with a matte blue rubber strap that adds some sportiness to the overall appearance. 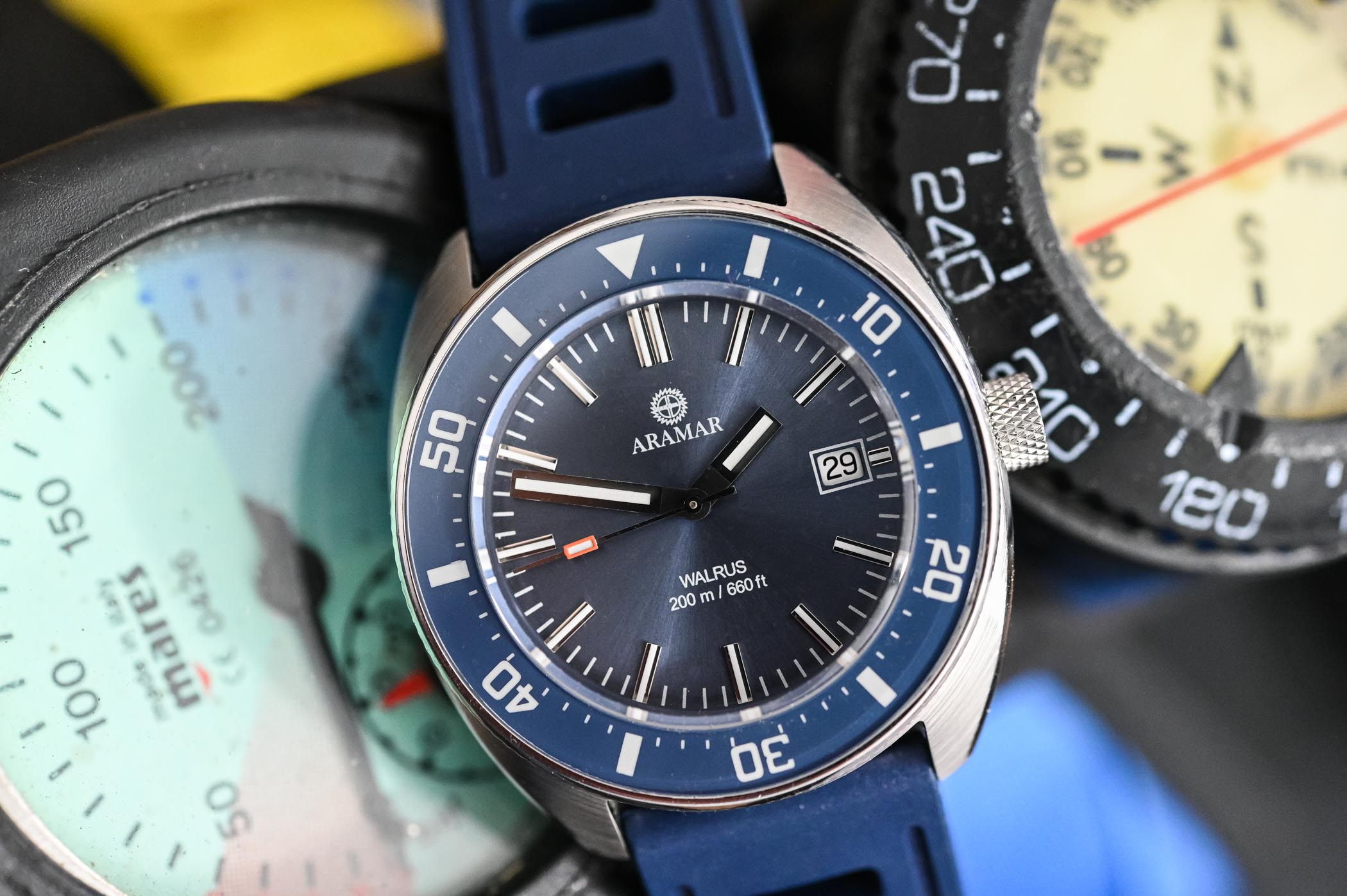 All the development work for the watches is done but production will only start if the Kickstarter goal is achieved. For the previous editions, that hasn’t proven to be a problem for Aramar, so we’re not expecting difficulties there this time either. Deliveries are expected in June 2020.

The Aramar Walrus was designed in the Netherlands and will be manufactured in China (except for the movements, obviously). Therefore the prices are kept as low as possible. The first 300 backers will get a Super Early Bird price of EUR 399. Each watch comes with a one-year warranty. More details and orders at Kickstarter.