Aquastar is a very niche brand, specialized in diver’s instruments. It is also a rather young brand, in the vintage field, as it was only established in 1962. The brand started supplying watches to Jacques Cousteau’s dive team in 1965, and it seems that the brand’s founder, Frédéric Robert, working under the umbrella of the JeanRichards Company, was not wrong in his push to create dedicated dive watches, including today’s specialized chronograph, the Aquastar Deepstar. It may not be the most practical and functional dive watch ever created, but its visual appeal can’t be denied. This is why we’ll take a closer look at it, in today’s episode of the Vintage Corner.

This Aquastar Deepstar diving chronograph was created in an era of new world of exploration. While NASA and the USSR were reaching Space and planning for a moon shot, others were using advanced technology to explore the depths of the oceans on Earth. The rush of technological development in materials, plastics and new alloys were beginning to leach out from these Space Programs as Deep Sea exploration was benefitting. Soon after the Deepstar Chronograph, Aquastar was indeed not far away from producing a watch with a ‘neoplastic’ fibreglass case, the Glasstar. 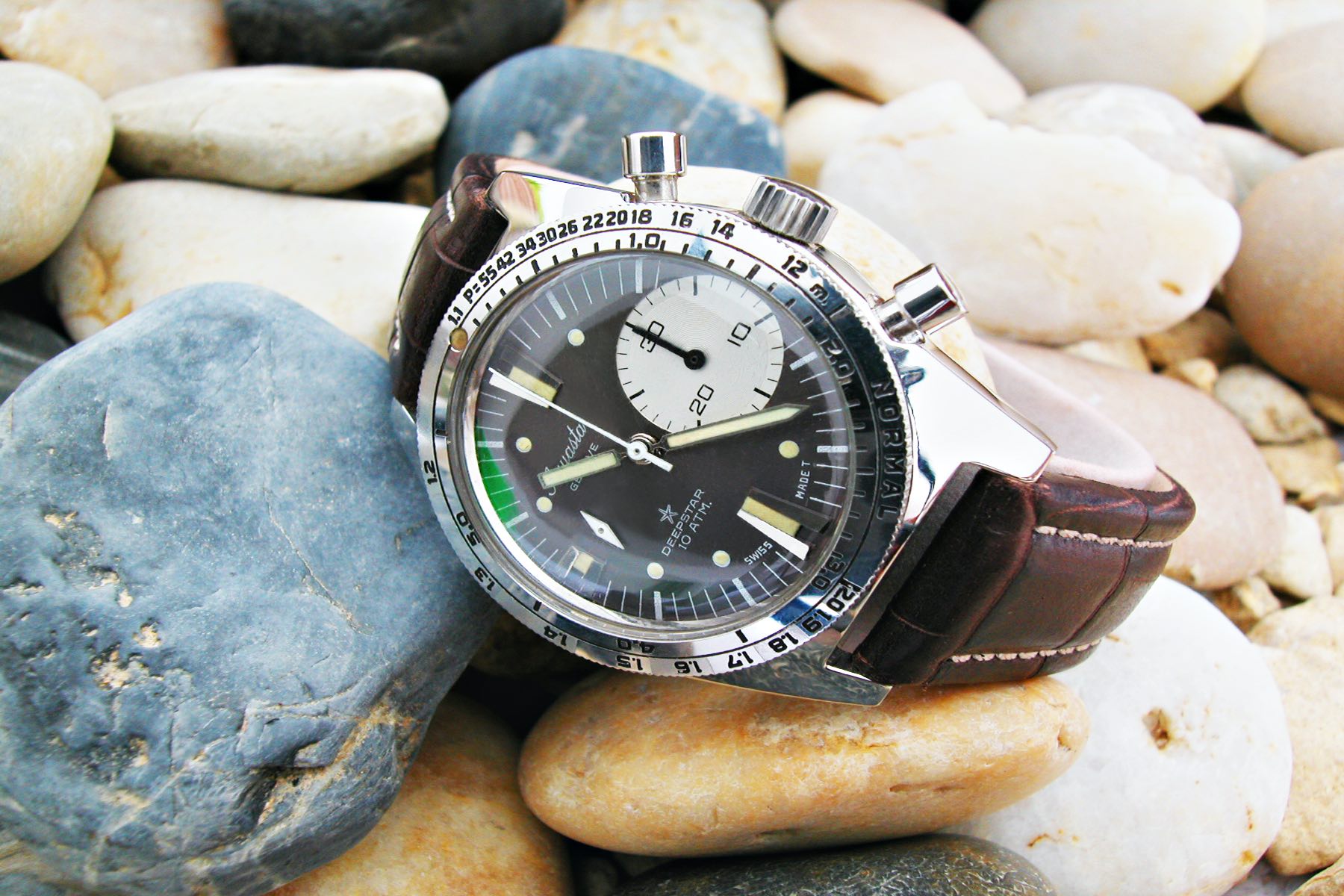 By 1966, Aquastar was offering a two-register, stainless steel diving chronograph with a technical decompression guide table engraved on the bezel, blocked pencil luminous hands for ease of reading and yet a stylish dial, with some Art Deco elements. The Aquastar Deepstar came with its own decompression dive table, which corresponds to the bezel. From my research, I can give you the basics. The inside track of the bezel measures the ‘length of dive time’ and is set to the minute hand – a classic feature for dive watches. For planning repetitive dives, as this hand moves, it shows decompression time until it ends up in the ‘Normal’ zone, which means there is no longer any nitrogen present in the bloodstream. This 1966 Aquastar Deepstar was a very modern piece at the time, visually-speaking, but not mechanically. Movements featured in these watches were born 50 years earlier and, as you can see, they still have that classic, organic look, which seems almost decorative. The Valjoux 23 used in these examples is a hand-wound, 17-jewel, column-wheel chronograph. It is a well-regarded, high-grade movement, which will later be equipped with Incabloc shock protection. The Valjoux 23 comes from a family of movements that includes the Valjoux 230 (a Flyback, used by Heuer among others) and the Valjoux 23c (used by Breitling in their early Triple Date watches) and that enjoyed a manufacturing run of over 50 years. 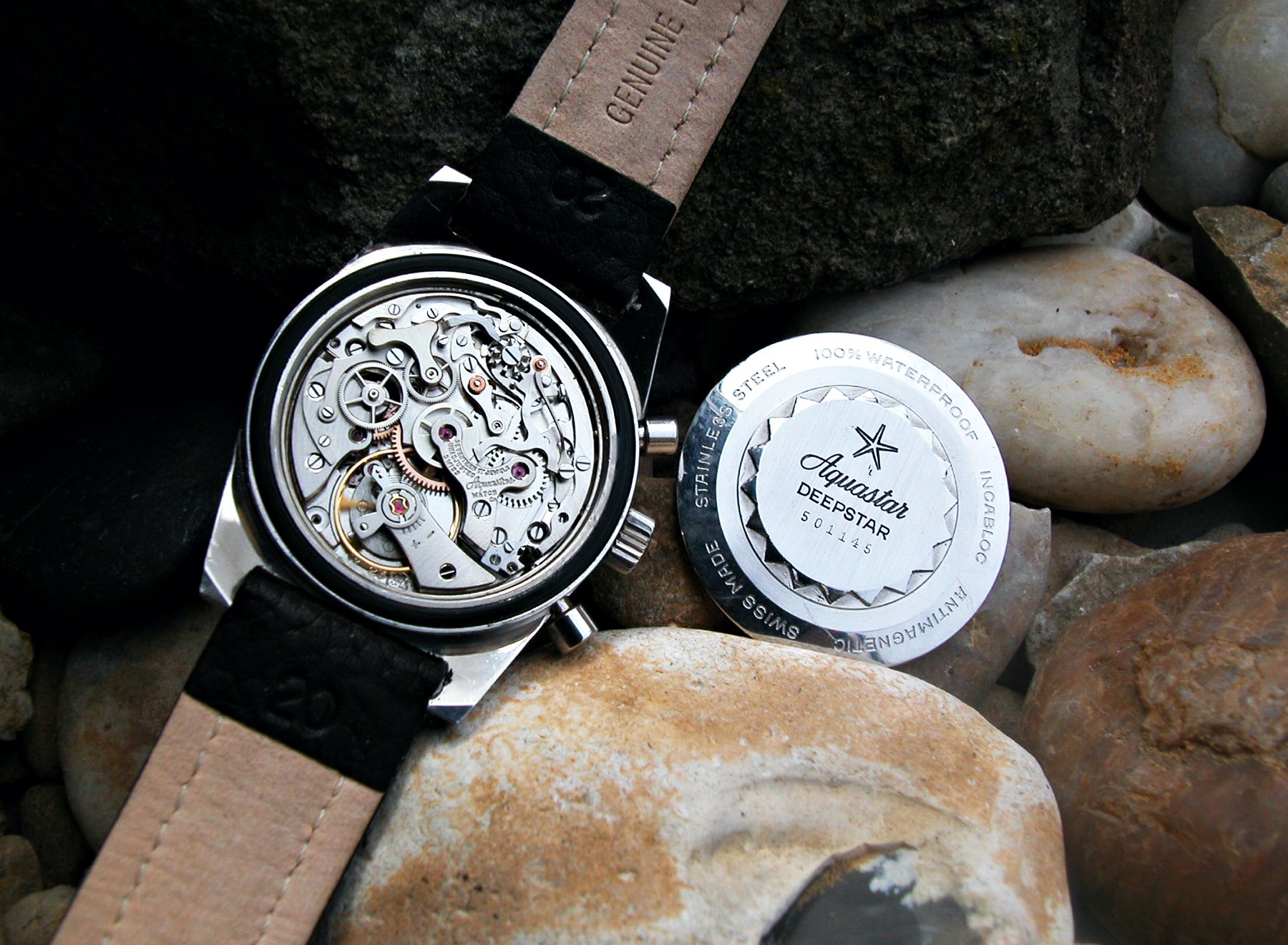 The Aquastar Deepstar was an early hybrid chronograph, in the sense that it wasn’t really designed in the way a dive chronograph would be today. Early 1950s dive watches, during their early development of countless dives and feedback sessions, eventually narrowed in visual design to include dark dials with large markers or at least a greater contrast between the relevant elements – allowing the markers and hands to be easily seen underwater.

The dial of the Deepstar follows the combined styling of the earlier Aquastar 60, with its large luminous plots, and the later Aquastar 63, with its tuning fork-styled markers at 12, 6 & 9 o’clock. These markers are surely a homage to the Art Deco movement of the 1930s, and feel highly designed for such an instrument watch. 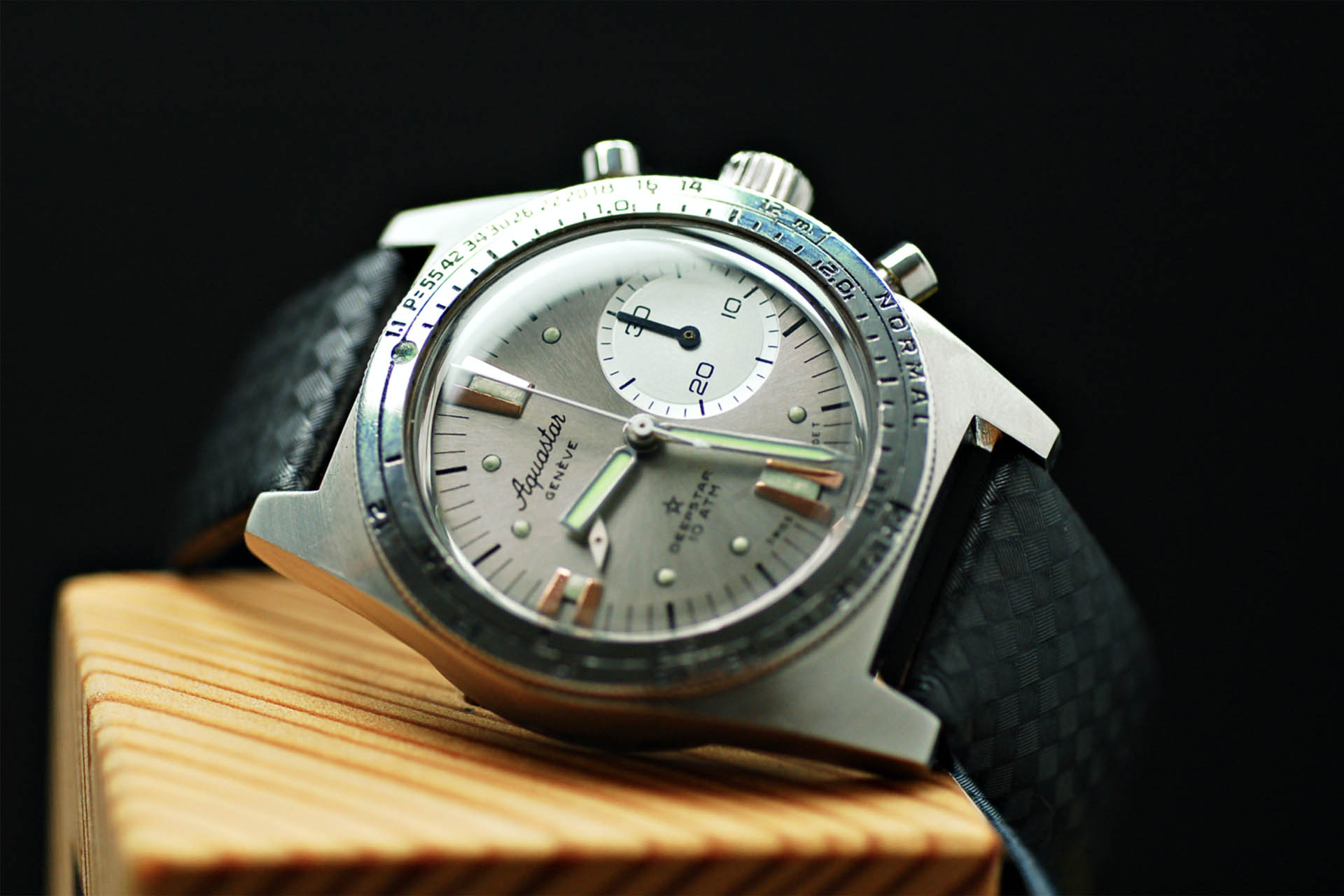 With it’s ‘purple’ or ‘silver’ sunray-brushed dial, one would definitely say that the Deepstar is not dull and yet it really isn’t that practical either. High polished plated markers under a high domed plexiglass crystal just create reflections and startles. But worn on the wrist of a non-diver, it looks super-cool and purposeful. Perhaps this is where Aquastar was going with this design, again widening their reach as well as appeal to beyond the aquanaut market.

This typical two-register chronograph, which could be produced with a 45-minute recorder at 9 o’clock or, in the case of the Deepstar, with a 30-minute recorder. The 30-minute register at 3 o’clock is oversized and easy to read, being white against the dark background The small seconds hand at 9 o’clock is slightly different and has no sub-dial or printed track. Instead, there’s a double-sided diamond-shaped hand that is here only to be sure that the watch is running – a classic requirement for dive watches. 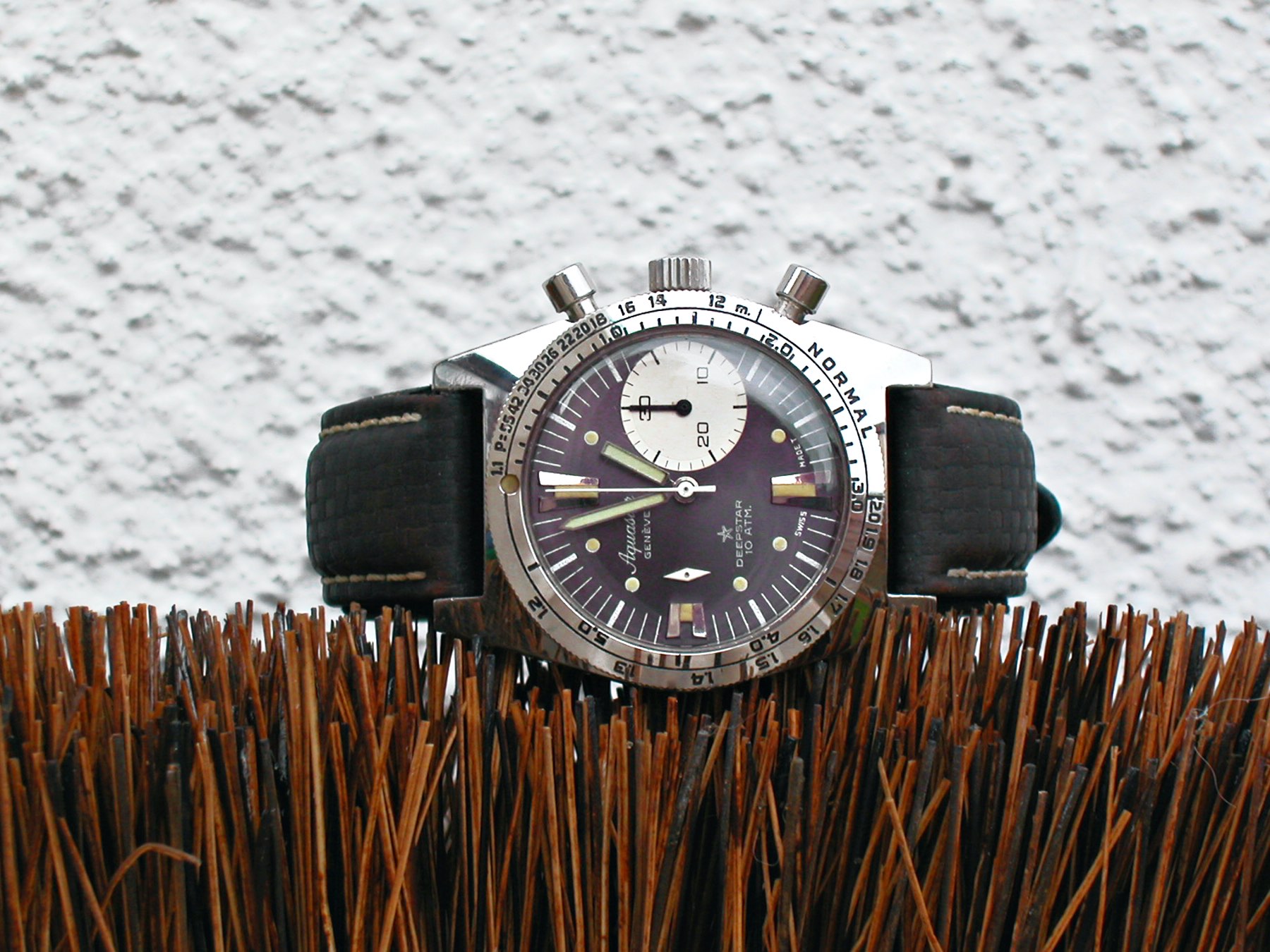 Where did the Deepstar name come from…?

In 1966, while deep-diving submersibles were still in their infancy, an Aquastar 60 was taken down to the bottom of the Marianas Trench in the Trieste Bathyscape dive, but a specific event allowed them to prove their worth that year, when a US Air-Force Bomber had a mid-air collision over the village of Palomares, on the Mediterranean coast of Spain. In the accident, while refuelling, the B-52 bomber disintegrated and four H-Bombs were ejected from the plane. Three of these nuclear bombs crashed on land (and two being destroyed) and one landed in the Sea. An international team of underwater operators, relying on the submarines Alvin, Deep Jeep and Aluminaut (previously used by Jacques Cousteau) were brought together by the US Navy to find the submerged 1.45-megaton Hydrogen bomb.

Alvin located the bomb on 2 April, at a depth of 2,900 feet (880 m). On 7 April, an unmanned torpedo recovery vehicle, CURV-I (controlled underwater retrieval vehicle), became entangled in the weapon’s parachute while attempting to attach a line to it. A decision was made to raise CURV and the weapon together to a depth of 100 feet (30 m), where divers attached cables to them. While the operational efficiency of these new technologies during the 80-day search was far from perfect, their general performance encouraged the US Navy to offer a contract later in 1966 to the company Westinghouse, to lease their latest submersible named Deepstar 4000 for exploration dives off both the East and West Coasts of the Continental USA. The Deepstar 4000 Submersible saucer was designed for Westinghouse Electric from 1962 by non-other than Jacques-Yves Cousteau, who’s dive team wore many Aquastar watches, including the Deepstar that can be seen here, in one of our previous articles. 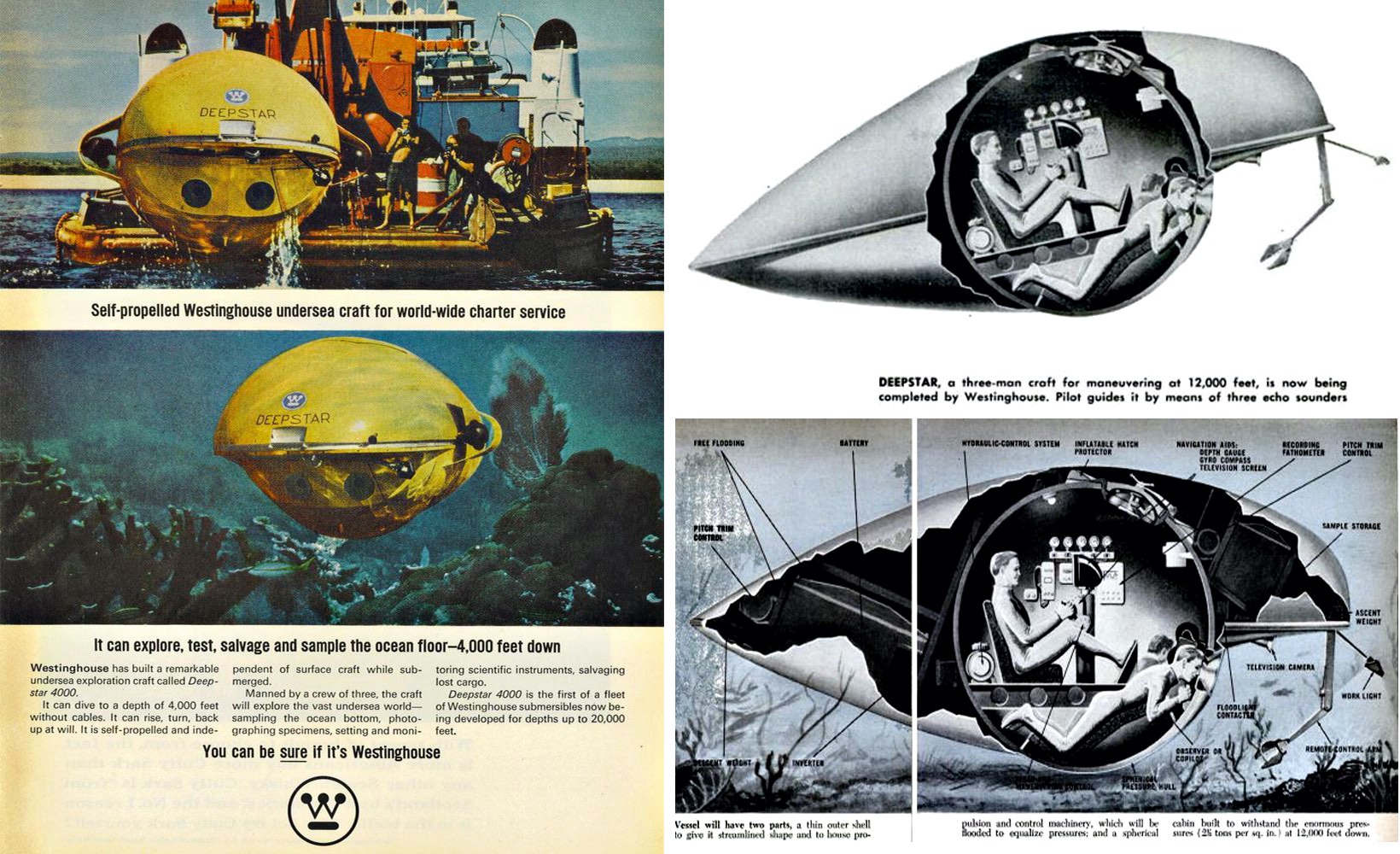 Back to the watch, the Aquastar Deepstar becomes something of an enigma when analyzing how the design elements were brought together. Even the caseback, which is screw-down, does not have notches on the edge to fit a standard caseback opener but instead, there is a ‘raised star’ with the name and brand logo engraved in the centre. All of the Aquastar watches that had this case back needed a special opener, available from Aquastar, to grip the caseback so that it could be unscrewed. This explains, on most examples of this watch, the casebacks are badly scratched – since most watchmakers didn’t have the required tool. 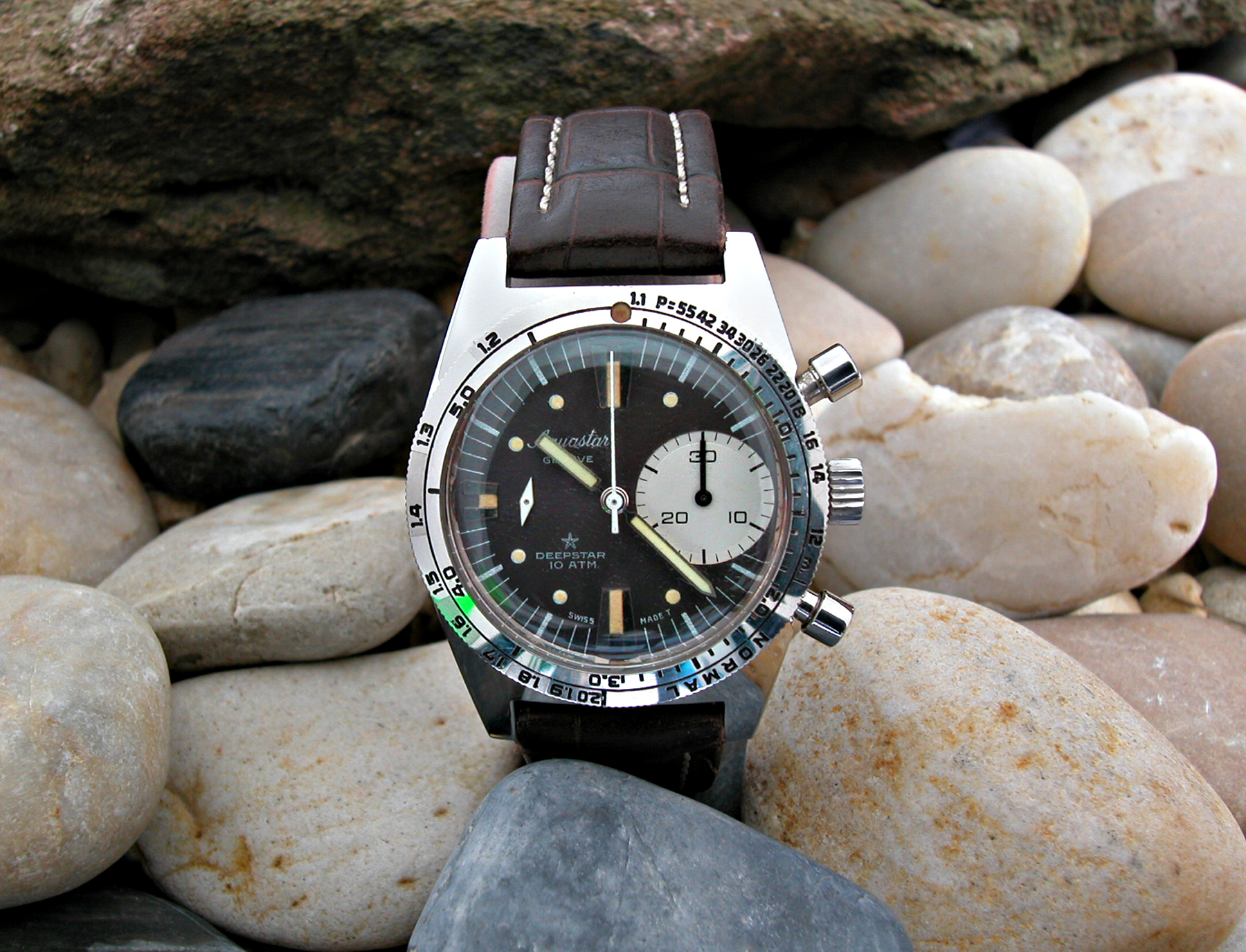 It seems to me that this watch may have been a personal design project – maybe even by Frédéric Robert himself. It is a solid dependable chronograph for the time, with real tool elements, like the Dive decompression table, the 100m Waterproofing and the large hands. Yet, it is quite unique and bold in terms of design… The overly-designed polished markers, the purple sunburst dial and diamond seconds hand are all rather surprising in this instrument context. Perhaps it was designed with the view of the quartz revolution on the horizon, when mechanical watches were starring into the abyss of the unknown and Robert wanted to keep a few of the signs of the old world present while entering the new.