This watch, the Universal Genève Space Compax, is one of the classics of 1960s design, with all of the great elements needed to make a fairly complicated wristwatch seem practical and attractive at the same time. In the 1950s, the final DNA Chain double helix was discovered and influenced furniture designers with their coat stands and hat racks. Later, the 1960s were all about racing cars and ultimately Space Travel. The thoughts on the name of this watch are that Universal Genève wanted to create the idea that its watch could also be adopted by NASA for the Space Programme… but actually, it was just the epitome of European styling. 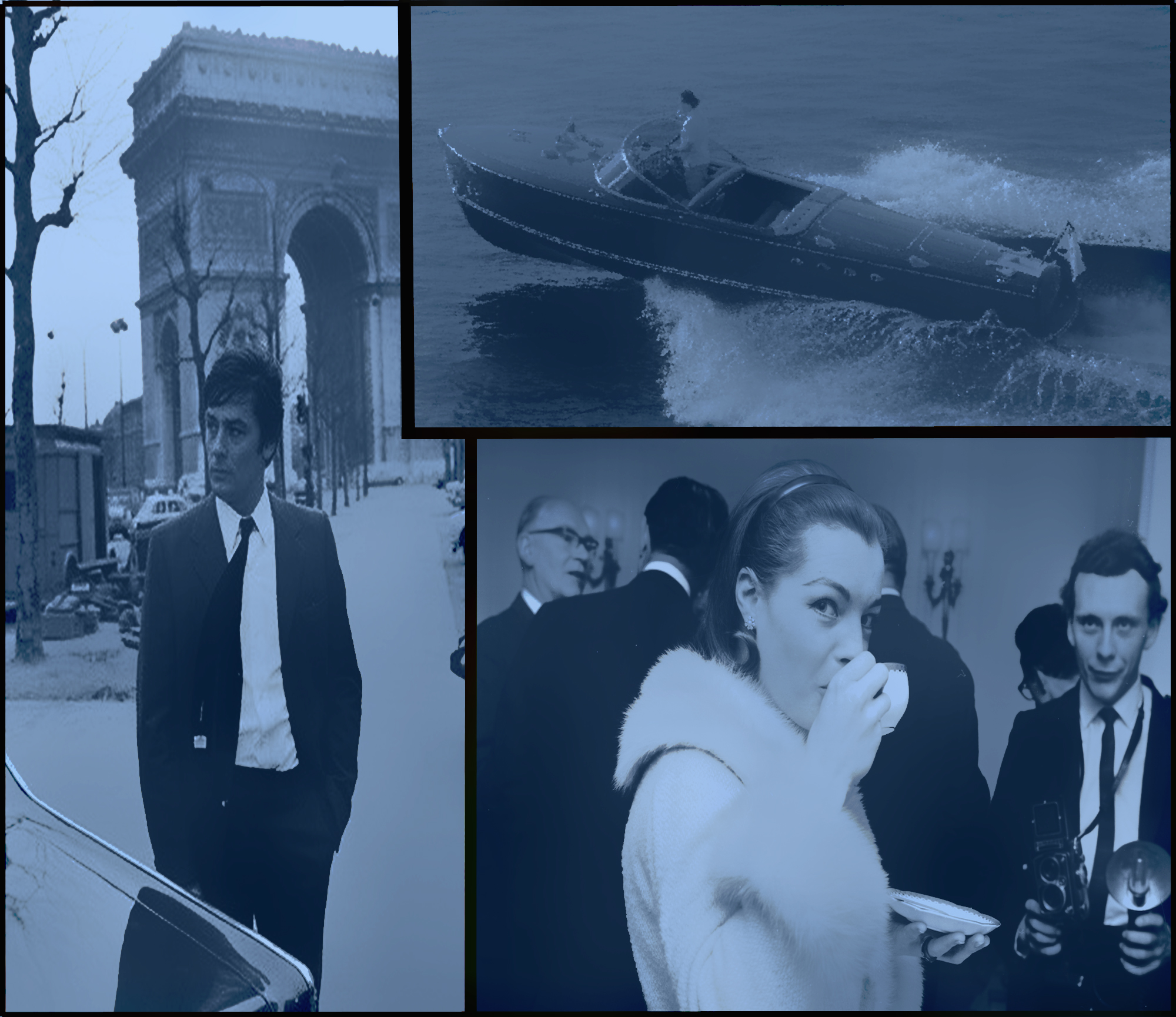 The Universal Genève Space Compax is a beautiful watch but not quite as robust as the Speedmaster – something I found out when restoring these watches back to their former glory. It is more a watch to step off your Riva motorboat at the quayside of the Monaco Yacht Club, just like the 1960s jet set. The watch was supposed to be suitable for both diving and motorsport, as both disciplines could utilize the 12-hour chronograph, as well as the bidirectional bezel for off-set timing. 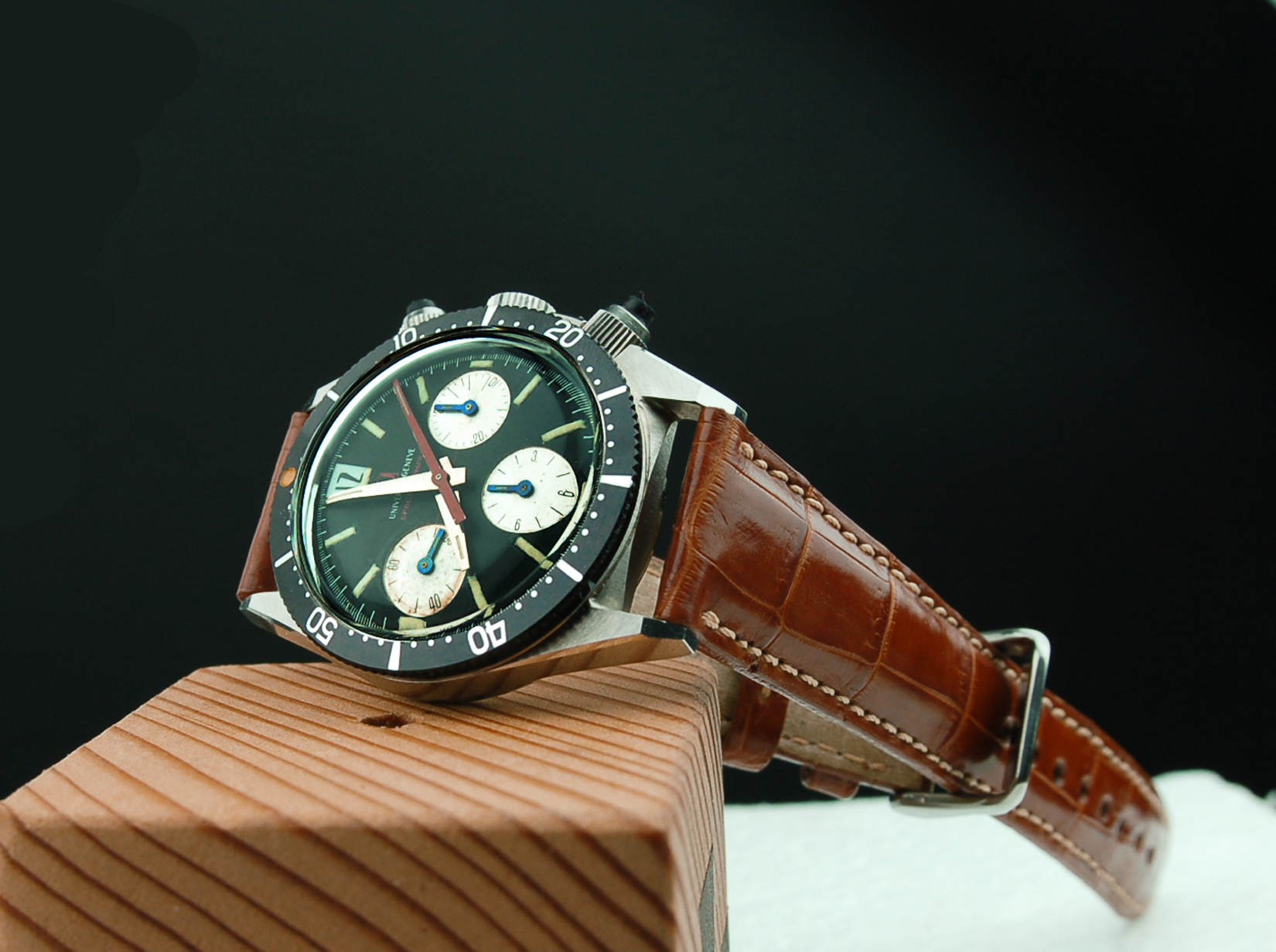 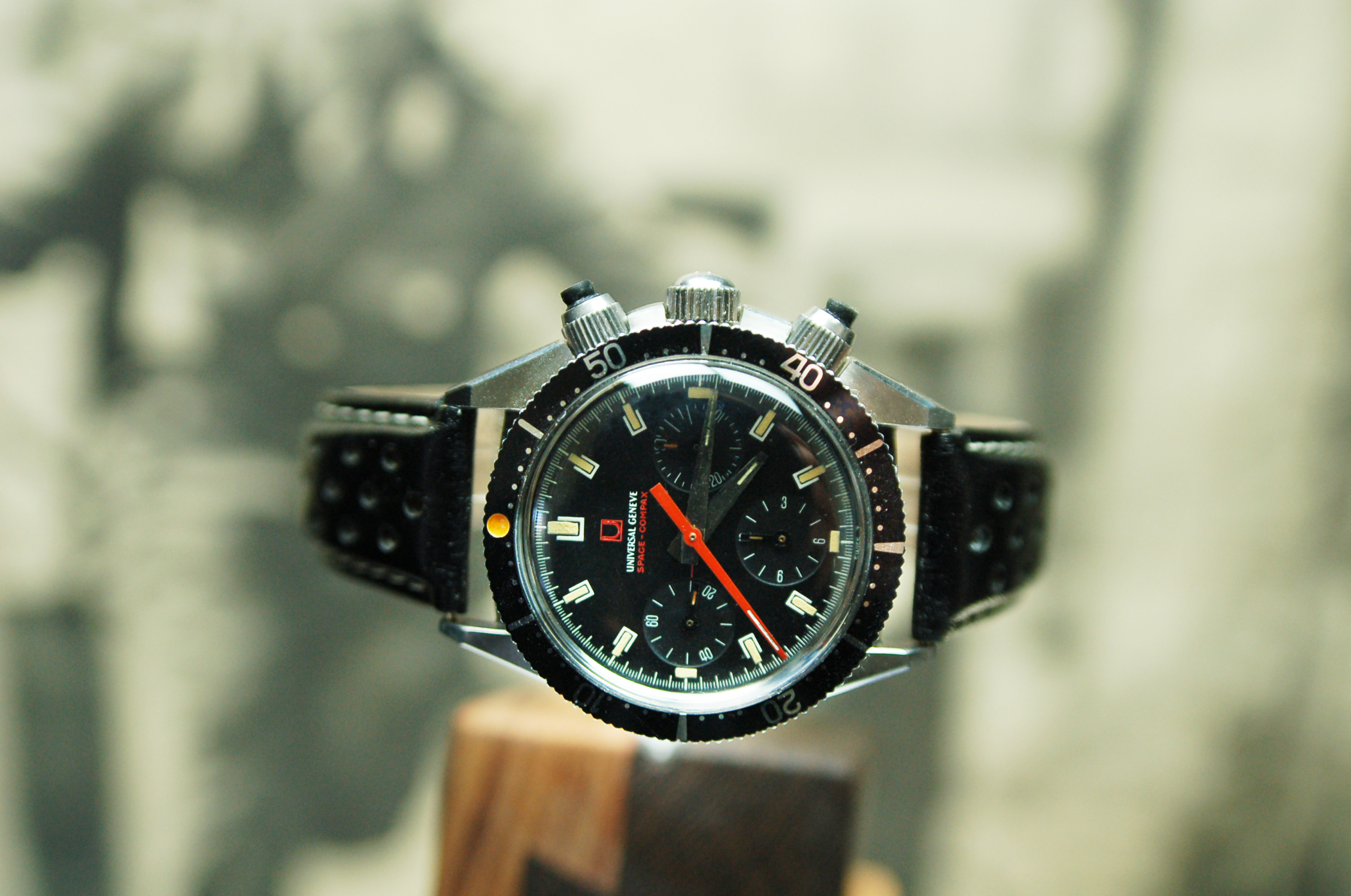 Typical of the Space Compax is its asymmetric case, with the wider right-hand side holding the pushers in armoured shoulders. This could look like the screw-in pushers used by the Rolex Daytona but, in this case, they have been engineered just to protect the rubber pushers from damage and, with quite a lot of effort, they can be removed. This watch came with standard steel chronograph pushers, as well as the rubber ones with the ribbed steel housings removed.

The main issue with the Space Compax is that it didn’t stand the test of time as well as the Speedmaster – as you can see below, a sample of watches that had a tough life.

They can be found with missing bezels, as they were simply anodized light aluminium, often without the Universal screw-in crown and almost always with the rubber pushers damaged or with the ribbed steel pusher housings removed and the pushers replaced with what turned out to be Omega Speedmaster standard pushers. They had a lovely linked bracelet made by Gay Frères but I hardly ever saw one fitted originally. 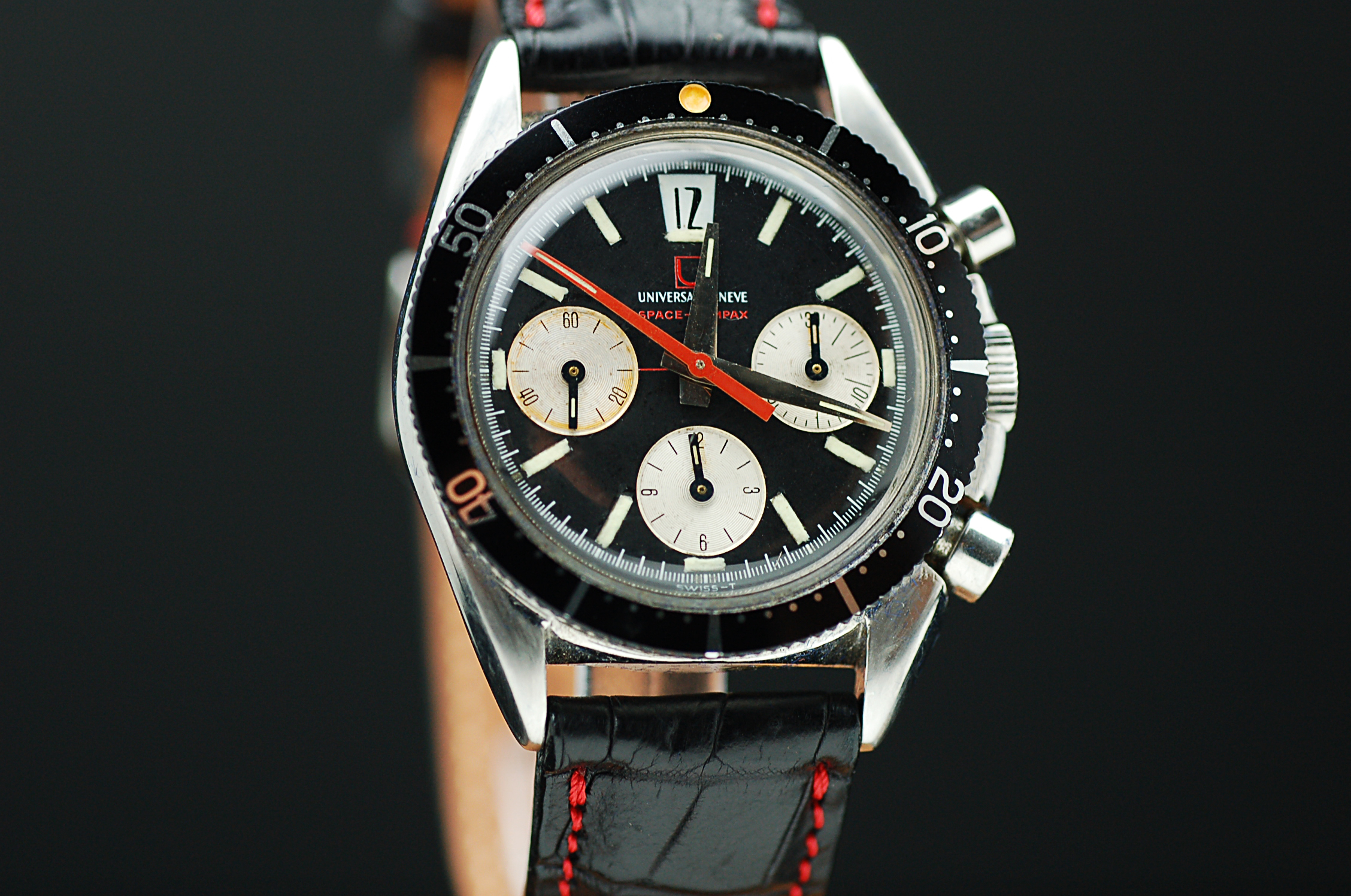 Here, the 4 o’clock chronograph pusher fits lower, wider and is from a Speedmaster.

The watch was manufactured with two dial styles. First is the “Civilian” version, just like the one above. It features a black dial with silver contrasting counters, and an Art Deco 12 o’clock marker. The second style, the muted dial style, was an all-black dial with U-shaped hour markers, which could be called “Military”. These names came from a man at Universal Genève (in charge of old parts). Not official names, I must add, just what he called them. Universal Genève at the time was making very different watches to the classic 1960s fare and I was told I was pretty lucky they had any old parts left. 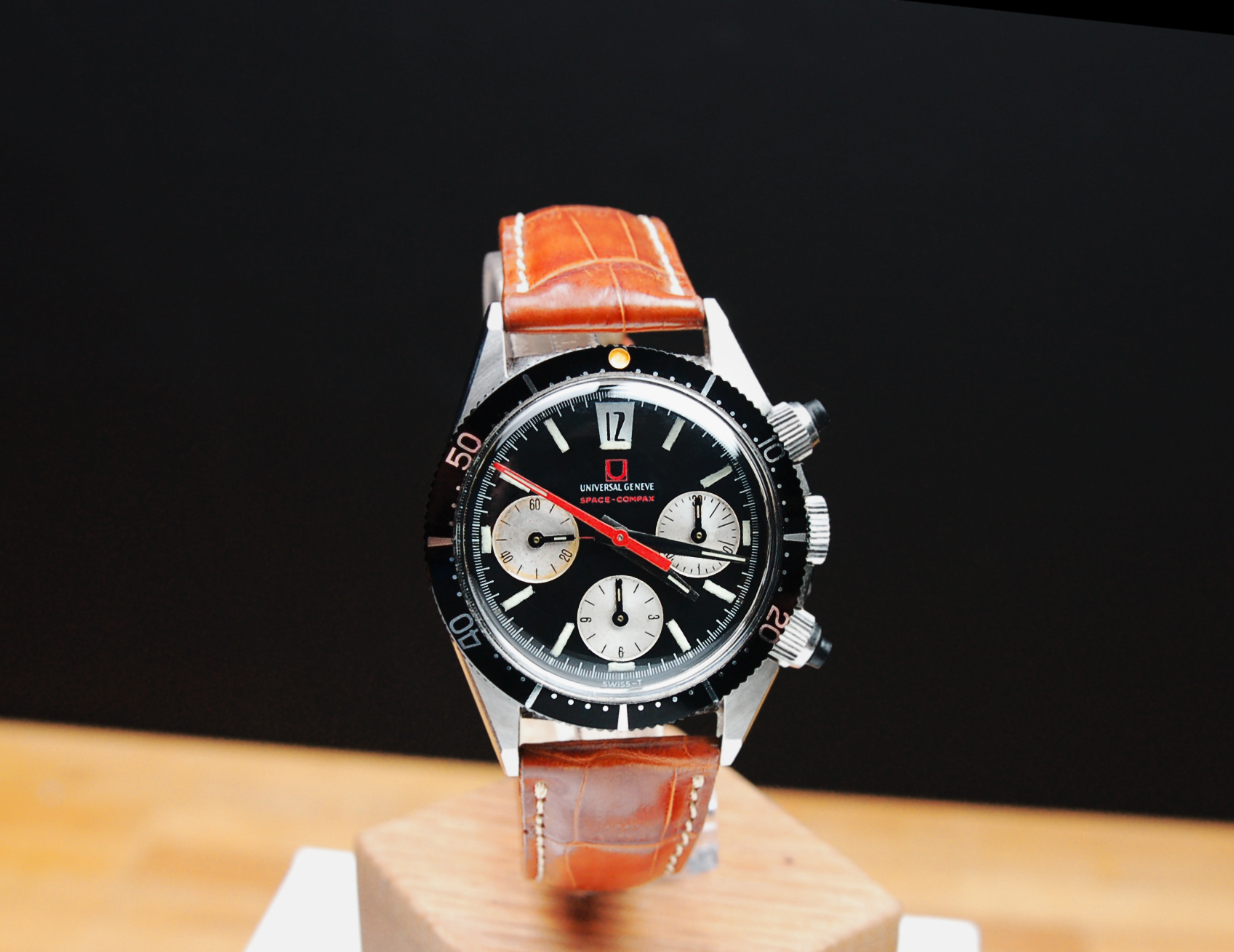 The cases of the Universal Genève Space Compax are very beautifully made – either very angular, like the one above, or with the pusher side brushed and rounded, which give the watch an organic rolled feel. The large screw-in crown was a Universal invention. Instead of screwing-down onto a thread on the tube side, there was a flat shallow spiral ring that caught the inside of the crown and wound the crown down to create a pressure fit. Something of a fiddly solution to the waterproof crown issue, later solved by the more robust Rolex approach… and ultimately a failure. The amount of water-damaged dials bears witness to their flawed design. 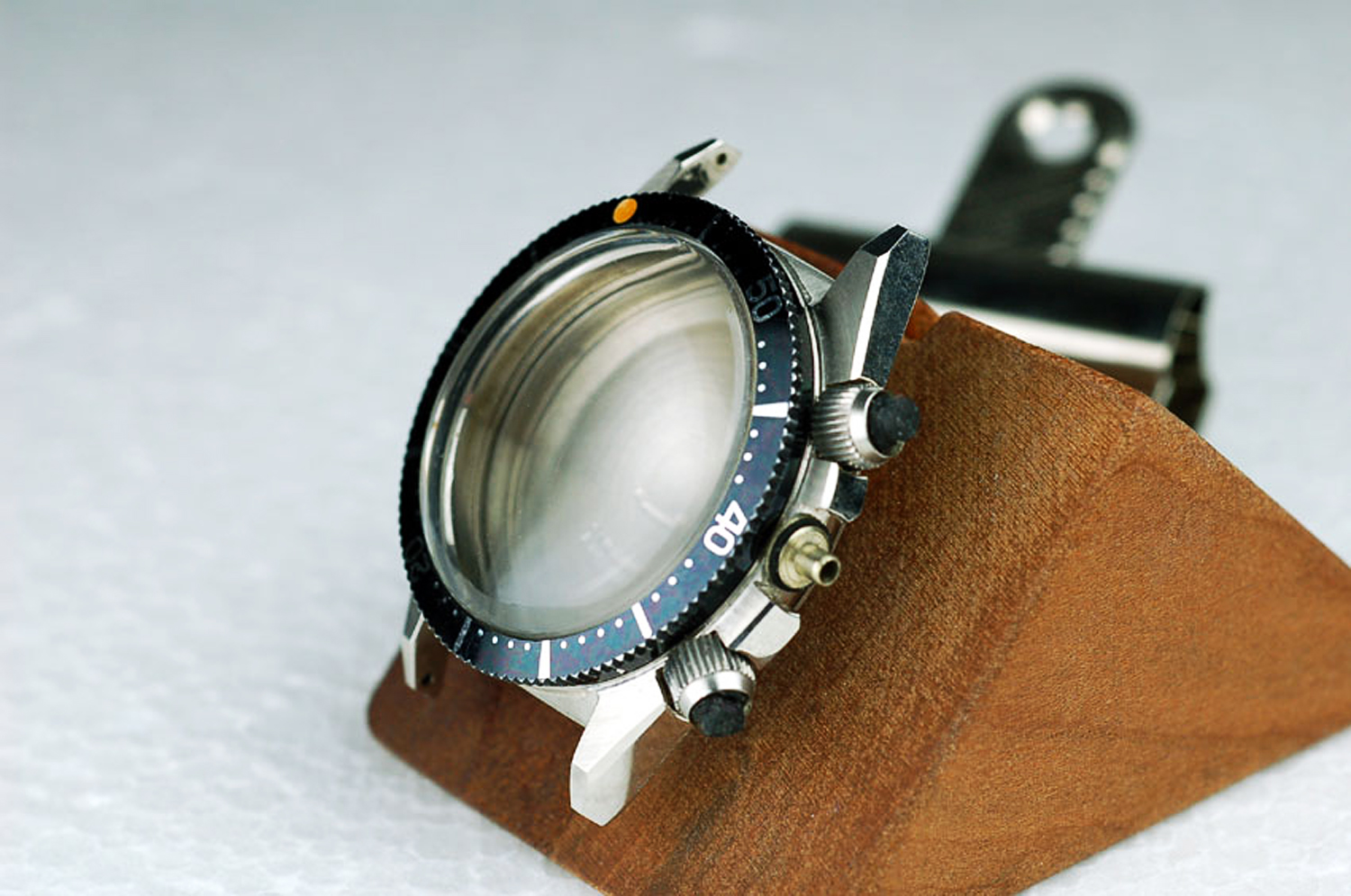 The acrylic crystal of the Space Compax is very thick and features the UG symbol engraved on the inside, in the middle – just like on Speedmasters with the Omega logo that can be found inside the Hesalite crystals. Although the pushers and the crown may have proved the Space Compax’s undoing, UG did not scrimp on the case finishing, the dials or their racing yacht hull style handsets. And also, definitely not for the movement, as the venerable Valjoux cal.72 12-hour chronograph was used as its running motor. A tried-and-tested movement, the typical “go-to” movement for the wave of watch companies that quickly churned out a 12-hour chronograph with the slim hope that NASA might cast an eye over their watches. 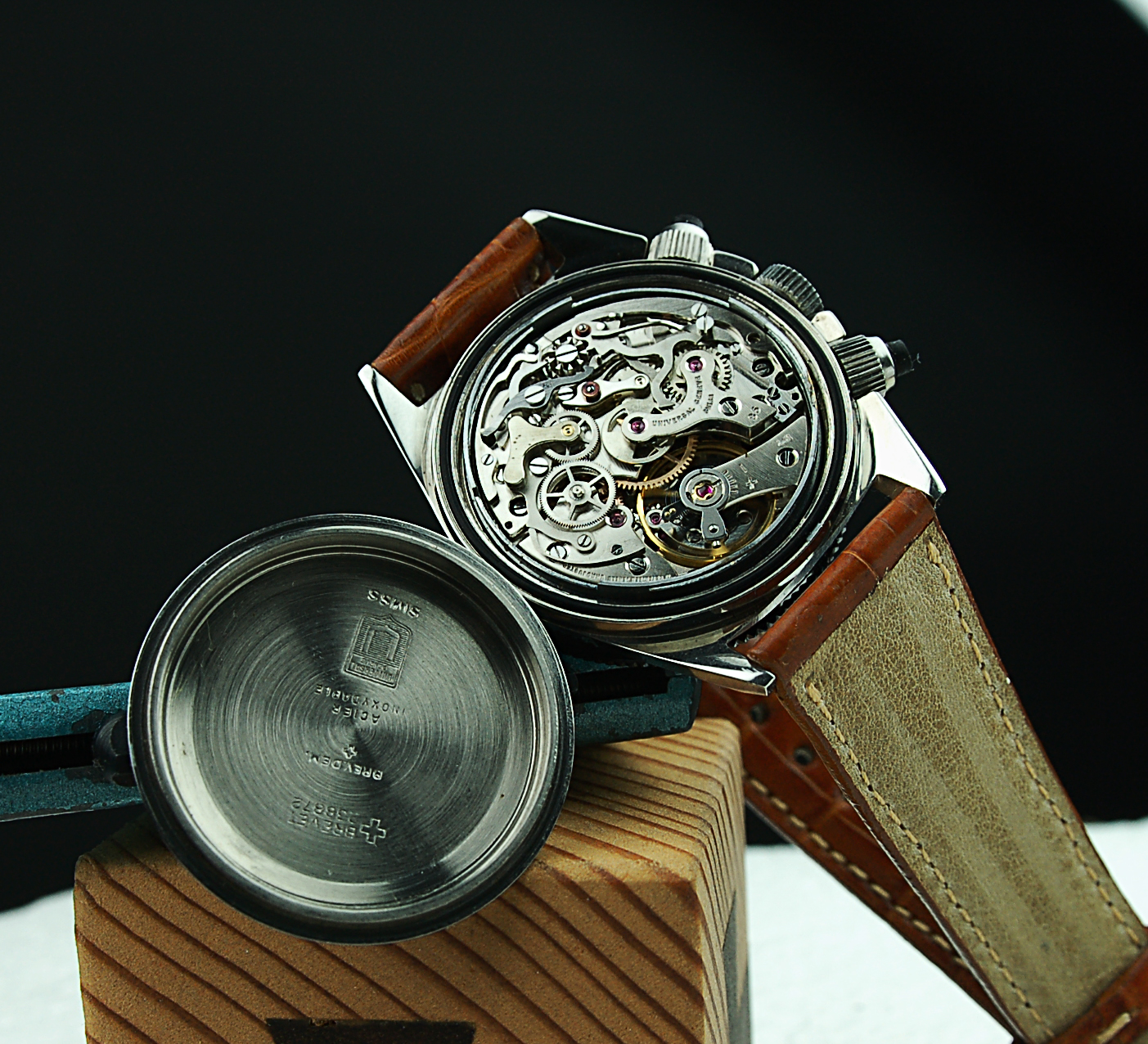 Don’t get me wrong, this is a beautiful watch, as many of Universal’s range were at the time. I just think that this watch was maybe rushed, in order to make it stand out. Although the design cues are awesome, it may have been inevitable that it would not go the distance.

Get one if you like something beautiful and don’t mind if it isn’t robust. The movement will run fine, but like most vintage watches, it won’t be water-resistant (at all). The rubber pushers really do not last and if buying one, ask to see how they work – or better, get one with the pusher armour removed and standard buttons fitted from Universal Genève, if possible. It really is one of those objects that look beautiful in pictures, like a piece of art but just more of a Cubist invention than an Impressionist vista. 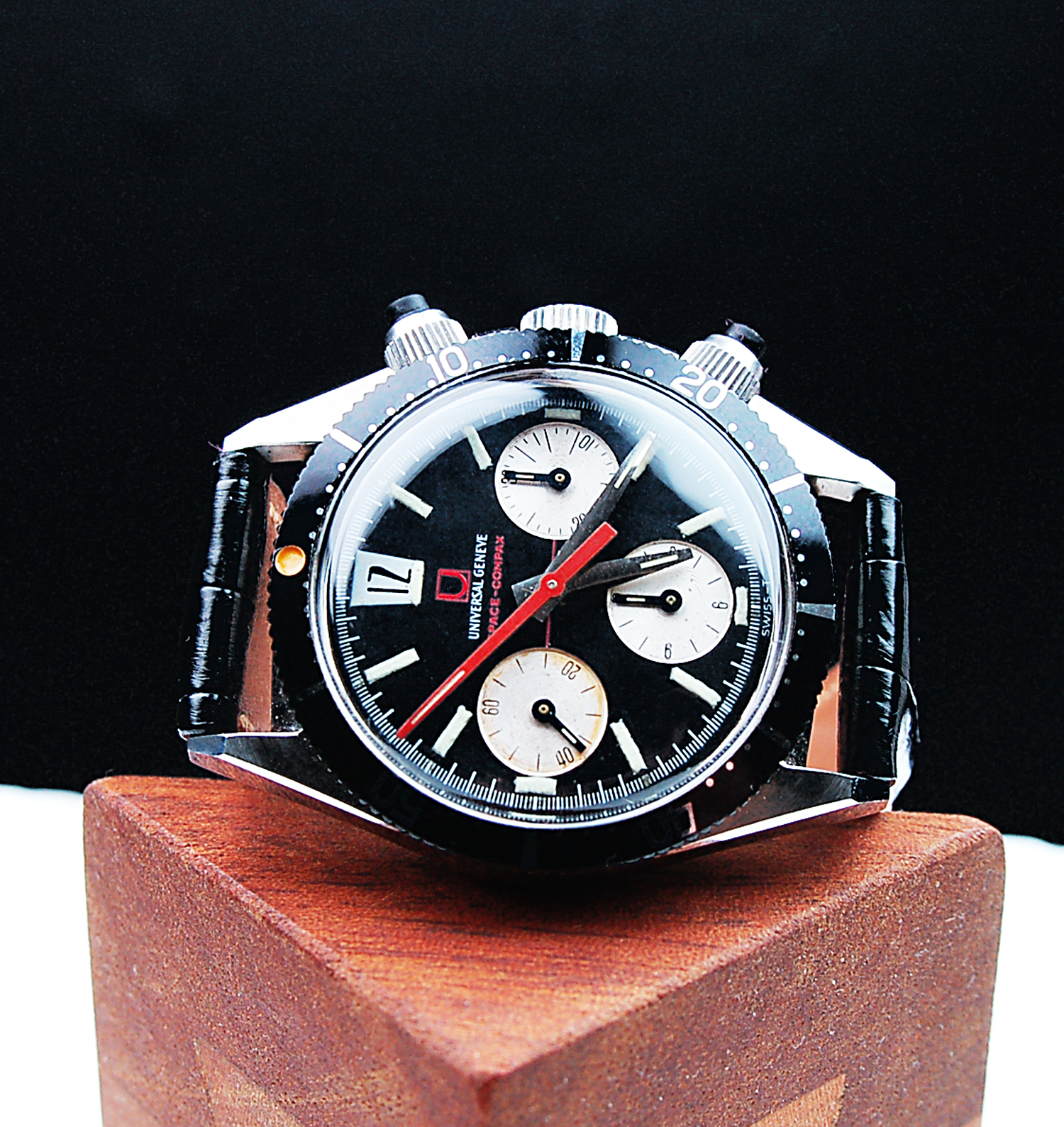 N.B.: There are several good books on Universals of this period. Just search Universal Genève Compax and Good Luck!