A while ago I featured the Howmet TX in an episode of The Petrolhead Corner. The Howmet TX is a turbine-powered Le Mans prototype from the 1970s, which featured a gas turbine engine from a helicopter. A relatively simple looking machine with quite a bit of strange technology underneath its swooping body. I knew this wasn’t the only gas turbine-powered race car ever made, so how about we investigate a few other cars too? Welcome to another weird Petrolhead Corner episode!

Turbine powered cars have a very peculiar characteristic, one that I have yet to experience in real life for myself. I have been to quite a few motorsports events in my life and even though I enjoy a screaming piston-driven engine as much as the next petrolhead, I have never heard a gas turbine-powered car whizz by on the straights other than through the wonderful world of YouTube. But even then, I get a tingle down my spine as a Howmet TX blasts by making that oh so unusual sound (for a car at least). The technology in turbine engines is relatively unknown to me, but most important thing to know is that it is a lot less complex as it might seem. One of the benefits of a turbine engine is quite a few less moving parts compared to an internal combustion engine, with the other being instant power delivery. Perhaps the biggest drawback is the fact a turbine engine isn’t built to slow down, take a corner, and then accelerate again. It is intended for constant speeds basically. That being said, it didn’t stop quite a number of race car constructors and car manufacturers to build one and explore the technology! 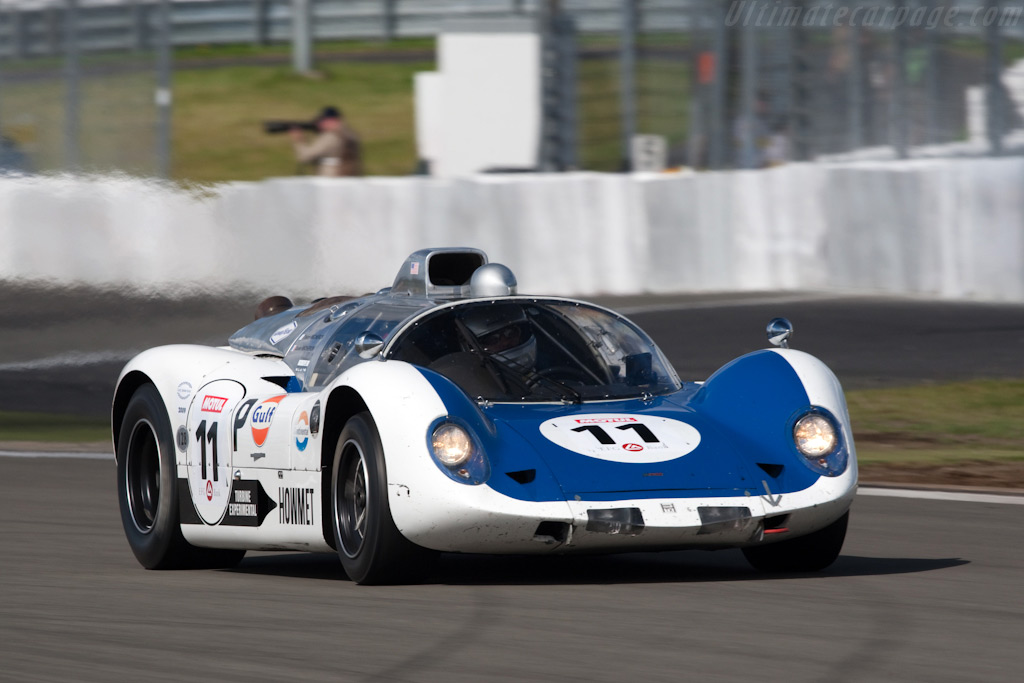 Before we check out some of the cars it might be helpful to clarify the type of turbines used in these cars. All of these are powered by a gas turbine, not to be mistaken with a jet turbine. A gas turbine is an engine where air flows through a compressor turbine to increase the pressure. The compressed air is then mixed with fuel and ignited. The resulting high-temperature compressed gas is then fed through a turbine which turns a driveshaft. This driveshaft can be connected to a propeller, or in the case of cars to drive the wheels. A jet turbine’s main difference with a gas turbine is that a jet turbine uses thrust as a method of propulsion. This is pretty much useless in cars other than perhaps land speed record vehicles where it doesn’t matter if you have a huge trailing plume of superheated air in your wake.

Shortly after the Second World War, which gave birth to this new type of engines and dramatically revolutionised aviation, plans were made to adapt gas turbines in road cars. At the time the technology was still in its infancy but as is common with a lot of new tech, new adaptations were being investigated. One of those developmental initiatives led to the Rover Jet1, being built in 1950. This is the very first car in which a gas turbine engine is used.

It took a couple of years to get it right but in the end, the car worked, and quite well actually. It was fitted with a compact gas turbine engine in the back under a rather simple looking bodywork. The turbine produced about 200bhp at 40.000rpm. Intakes on either side of the car feed air into the turbine, which was compressed and ignited driving the crankshaft and exhaust gasses being released through top mounted outlets. In 1952 the car was fitted with an updated gas turbine engine, which during a test run pushed the car to a top speed of 244kph. Despite promising results two major drawbacks halted further developments; fuel inefficiency and slow throttle-response. Only one example has been built, which is on display in London’s Science Museum.

Information is scarce on the Rover Jet1, which isn’t hard to imagine with only one car built almost 70 years ago. Despite this, it is featured on DriveTribe and Petrolicious.

A few years onwards from the Rover Jet1 came the Fiat Turbina Concept. Presented during the 1954 Turin Motor Show, it garnered huge attention as it was only the second ever car to be fitted with a gas turbine engine. Not only did it incorporate a gas turbine engine but its design was also heavily influenced by the jet age with a very streamlined body in striking white and red. The car was in development from the mid-forties and with the turbine technology being very new it was quite a monumental effort to get it working. Fiat installed a three-stage turbine with two centrifugal compressors, three combustion cans and a single-stage power turbine developing a massive 300bhp in total. 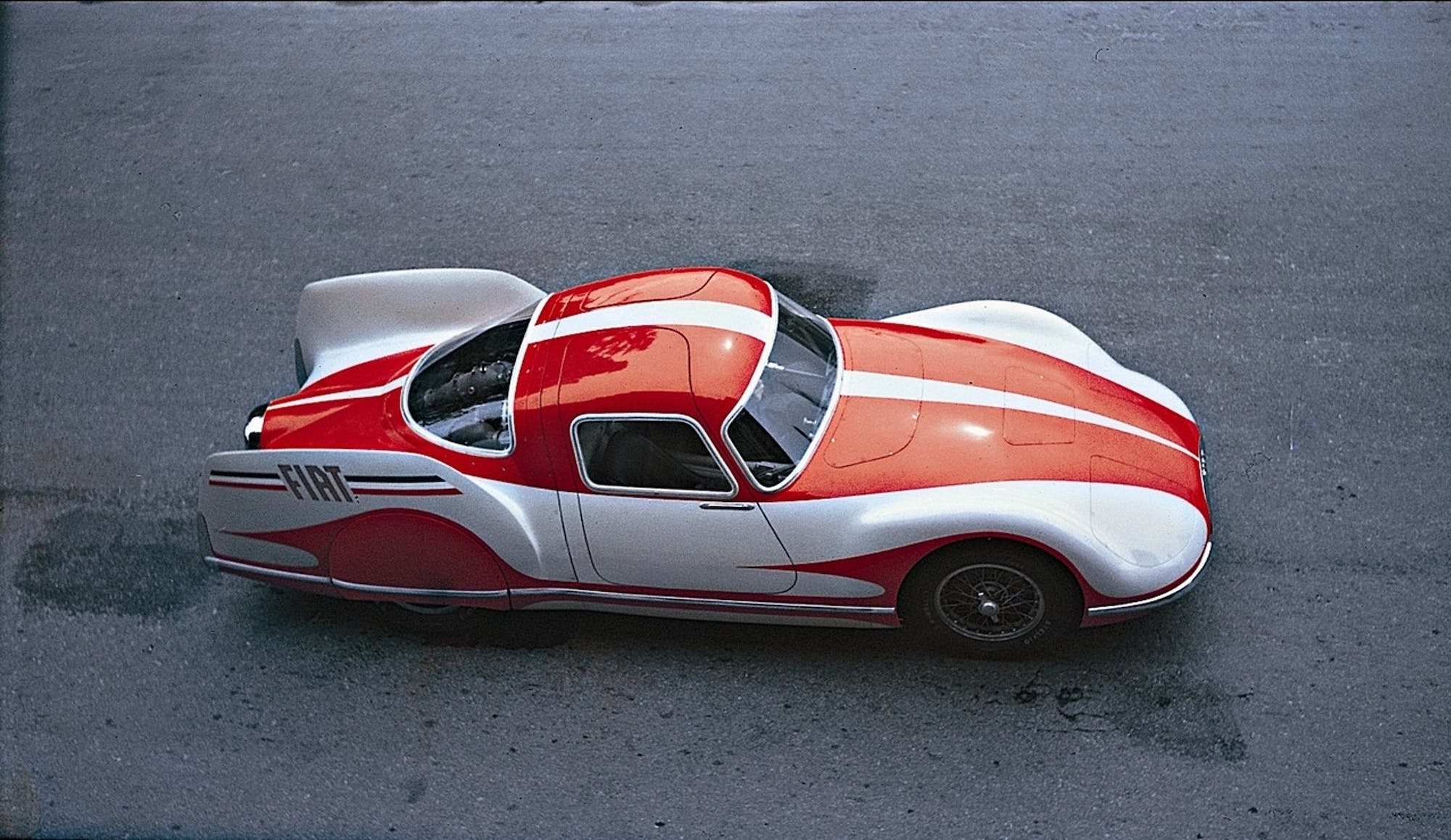 The striking body lacked features like headlights and taillights and the rear was decorated with airplane like fins and a large central exhaust. The shape proved to be incredibly aerodynamic and achieved a record-breaking low drag coefficient of 0,14 which stood for 30 years. It was an experimental vehicle in every sense of the word. The extremely spartan interior, with only one bucket seat, featured no less than 15 gauges on the dash to keep track of everything from rpm, speed, temperatures and pressures but also bearing indicators and tachymeters for the gas generator and the power turbine. 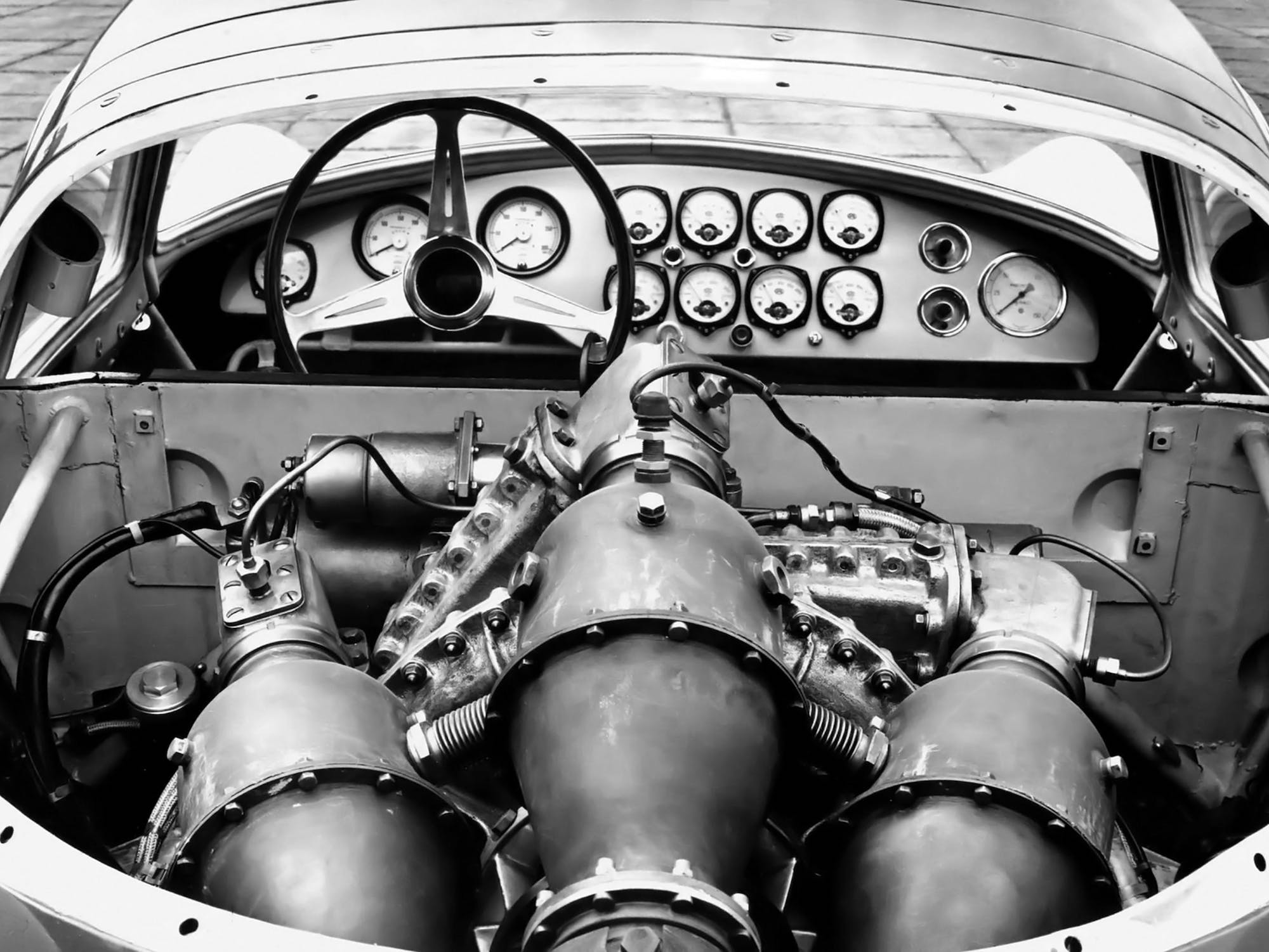 During testing Fiat achieved a top speed was about 250kph but the theoretical top speed was estimated to be over 320kph although this was never tested. Once again high fuel consumption, paired with overheating issues caused the project to be terminated despite promising results at first. The car resides in the Museo Nazionale dell’Automobile in Turin, Italy.  Details about this car can be found on DriveTribe and Car Throttle.

Up next is a gas turbine powered prototype racer developed by Rover and British Racing Motors (BRM). We’ve seen unusual engines by BRM before, with a bonkers 1.5 V16 grand prix engine and an even crazier in-house developed H16 engine. Following their endeavours with the Rover Jet1 about a decade earlier, Rover decided it would benefit their image if they developed their turbine-technology to go racing. Based on a rebuilt chassis from a BRM Grand Prix car, crashed by Richie Ginther at the 1962 Monaco Grand Prix, it was fitted with an aluminium body. At first it was an open-top racer but later it would be made into a coupe. 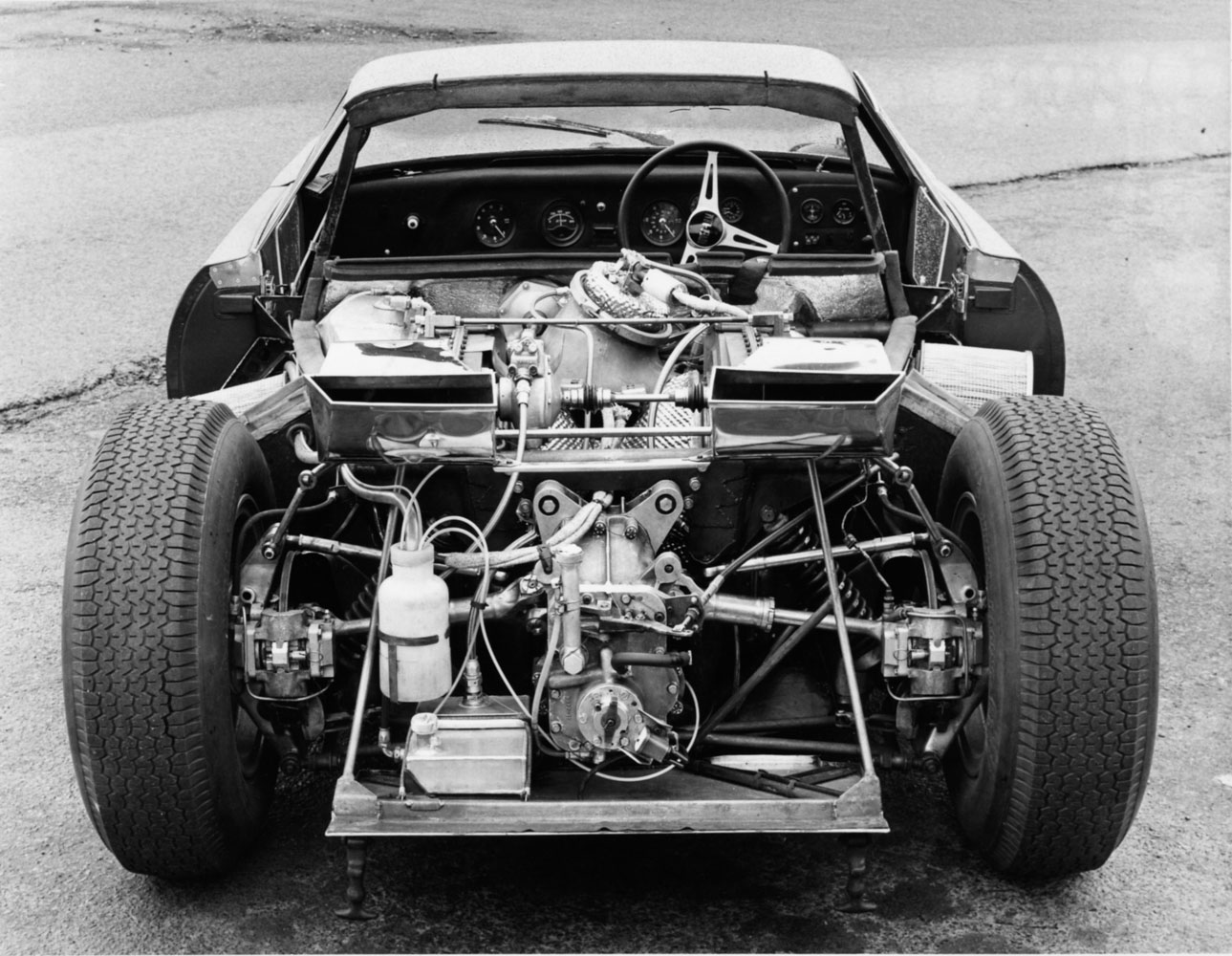 The gas turbine engine in the Rover-BRM was a single centrifugal turbine producing about 150bhp and was further improved during the years it was raced. Various improvements were introduced, mostly to make it more efficient instead of more powerful. 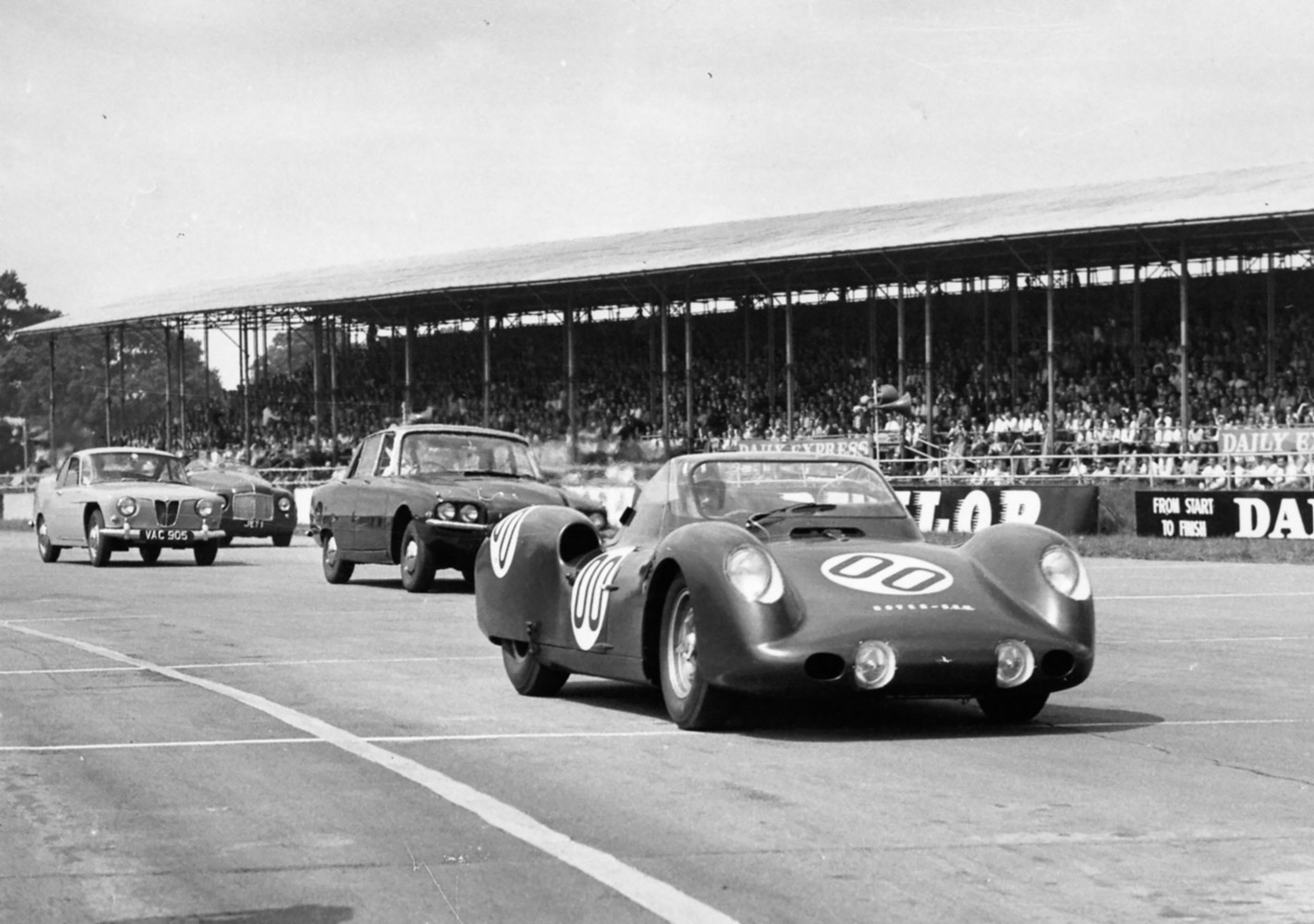 The car was entered into Le Mans in 1963, 1964 and 1965 and proved to be quite successful. The decision to participate at Le Mans followed the stipulation that a prize would be awarded for the first gas turbine powered car covering more than 3.600 kilometres during the legendary 24 hour race. The Rover-BRM achieved this goal during their first try in 1963, covering the required distance with hours to spare. As an experimental vehicle it wasn’t officially classified but if compared to a classified competitor it would have finished in eighth position overall. 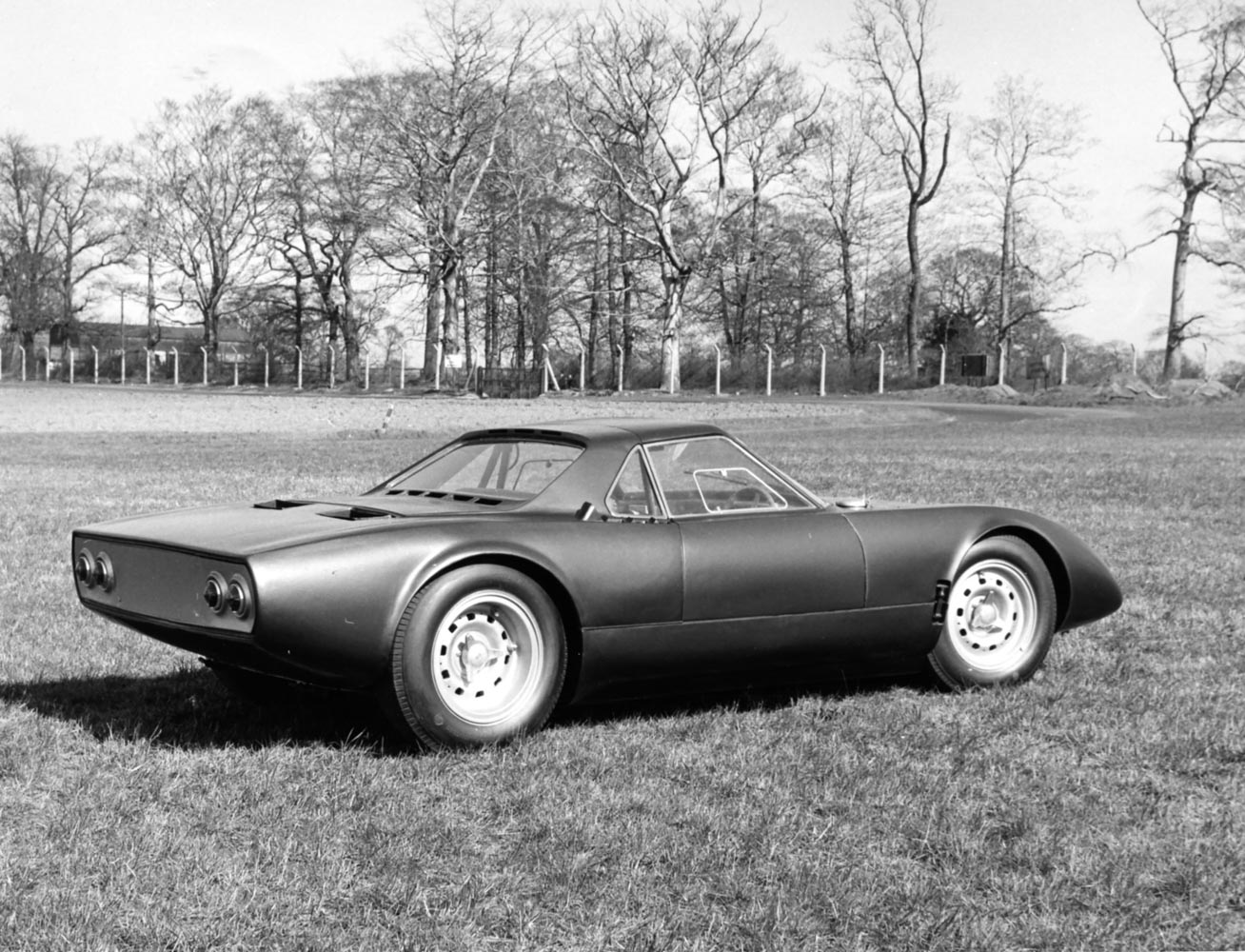 In 1964 it was withdrawn from the race due to damages sustained during transport and technical issues with the updated engine due to a lack of time for testing. In 1965 the car was no longer entered as an experimental vehicle and ran with the number 31 instead of the previous double-zero (for experimental entries). It competed in the 2-litre prototype class, mainly against Porsche. Now piloted by Graham Hill and Jackie Stewart, the car finished a notable tenth overall and seventh in class. Fuel consumption was limited for the Rover-BRM, so the new improvements in efficiency were vital. Technical issues during the race limited how hard the car could be pushed though.

After these three entries the car never raced at Le Mans again but was in use until 1974 after which it retired. I haven’t found period footage of the car there are various videos of the car starting up (and some even driving a little bit), including this one:

More information on the car is provided by The Motorhood and Goodwood Road & Racing.

The incredible Chrysler Turbine Concept car, built in the early sixties, is featured in an episode of Jay Leno’s Garage as he owns one of only two cars in private hands. A total of 55 cars have been built but most of them were destroyed by General Motors as they were considered prototype vehicles and rendered useless after the development period and the cancellation of the project. But at 55 cars built, it almost seems like a genuine production run and even the design was inspired by the jet age but still very practical for everyday use. At the end of the sixties Chrysler wasn’t able to push this car towards mass production due to financial struggles and the fact that it didn’t prove significantly better of a car compared to internal combustion engine powered cars.

During 1963 about 200 Americans had the chance to test these cars for a three month period to help Chrysler with the development. It must have been wild to experience a car like this pull up on the driveway, especially considering the turbine engine idles between 18,000 and 22,000 revs! The specially developed engine produced 130 horsepower. Not a huge amount but more than enough to power a car in everyday use. It wasn’t intended for racing, or performance, but as a practical machine for the general public. The body was done by Ghia, an Italian coachbuilder, and had a relatively simple design with references to the jet age at the back.

The benefits of the gas turbine engine were the ability to run on just about any fuel that uses oxygen as an accelerant, so you could theoretically fill it up with Chanel N° 5 perfume as Jay suggests in the video. Another huge benefit is the low service requirements. A turbine engine has a lot less moving parts, which also wear out a lot less. A single sparkplug for instance, instead of 1 or more per cylinder, is a huge cut in maintenance and costs. There’s also no warm-up period needed, start the car and your immediately good to go!

The downside however, the Achilles heel in all these cars apparently, is the high fuel consumption. When even at idle the engine burns through an incredible amount of fuel. This eventually caused the demise of gas turbine engine development with the intention of use in cars. It is only in recent years the concept is back on the drawing board, but more on that in a future article. 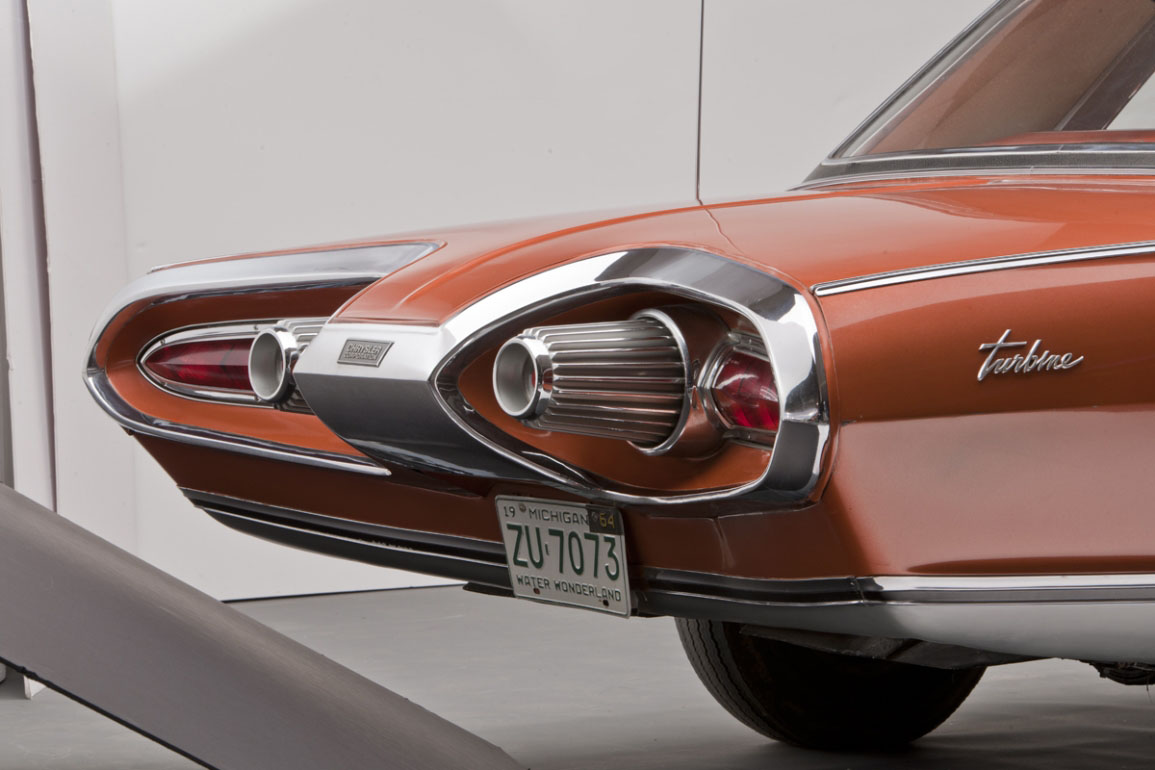 If you check out the extensive coverage by Jay Leno from a few years ago, it includes period material from the actual cars such as the unboxing and a promotional video explaining the technology of a turbine engine. Very cool stuff!