Start Bloggers Corner The Petrolhead Corner – The Dutch Made Exception, the Donkervoort Story

We Dutch are a small, but proud nation. When someone does something unusual and does that well, we tend to see them as one of us, as part of the people. Max Verstappen, for instance, is basically public property. When talking watches, we gladly share stories about Grönefeld, Van der Gang, Holthinrichs or other impressive Dutch watchmaking initiatives. If we’re talking about cars however, our nation seems to lack a comparative storyline, but there is at least one car maker that is very much worth mentioning; Donkervoort.

What led to this very article is a) the fact Donkervoort is very Dutch and b) they claim to have built the first road-legal sports car capable of pulling 2G of lateral acceleration through corners. A little history lesson is perhaps needed though, as I can imagine not many of you know about this small but determined car manufacturer from the Netherlands. 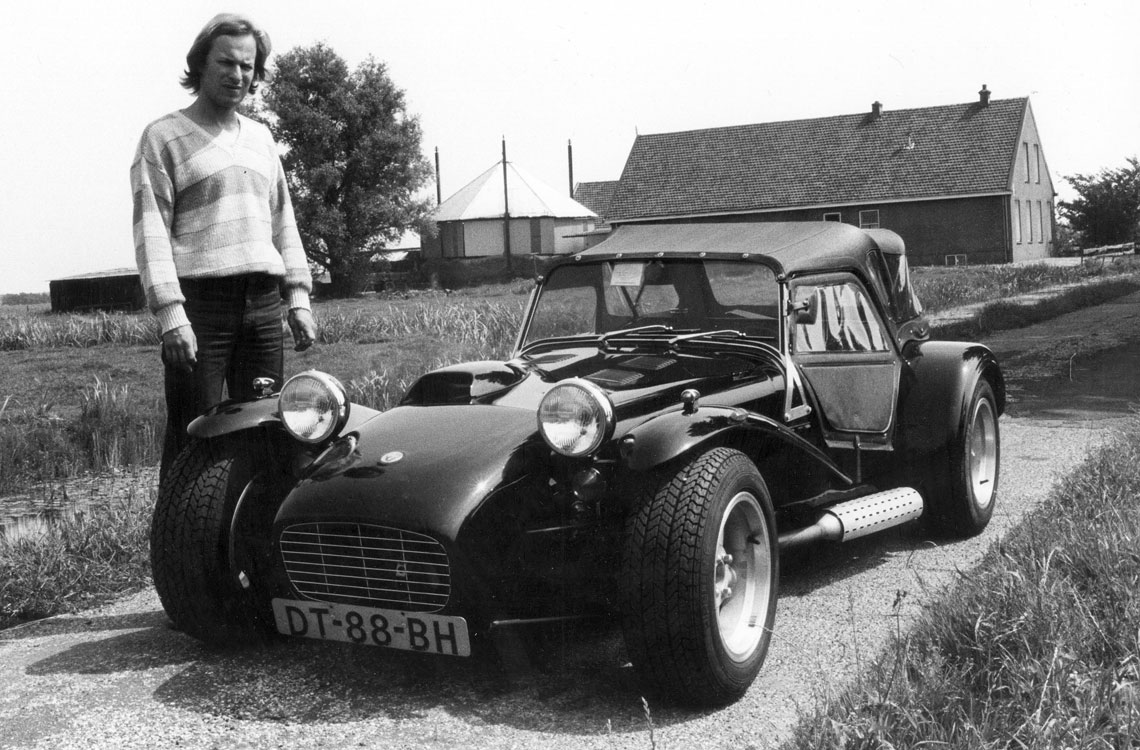 Joop Donkervoort in 1978, next to one of his earliest cars

The story starts in 1978, when Joop Donkervoort made his first steps into the car-building industry, in a very small Dutch town called Tienhoven. He started by acquiring a license to import kit-cars from the UK. These kit-cars lacked an approval to be driven on Dutch roads, and following the necessity to change the chassis to comply with regulations, Donkervoort as a car builder was born. 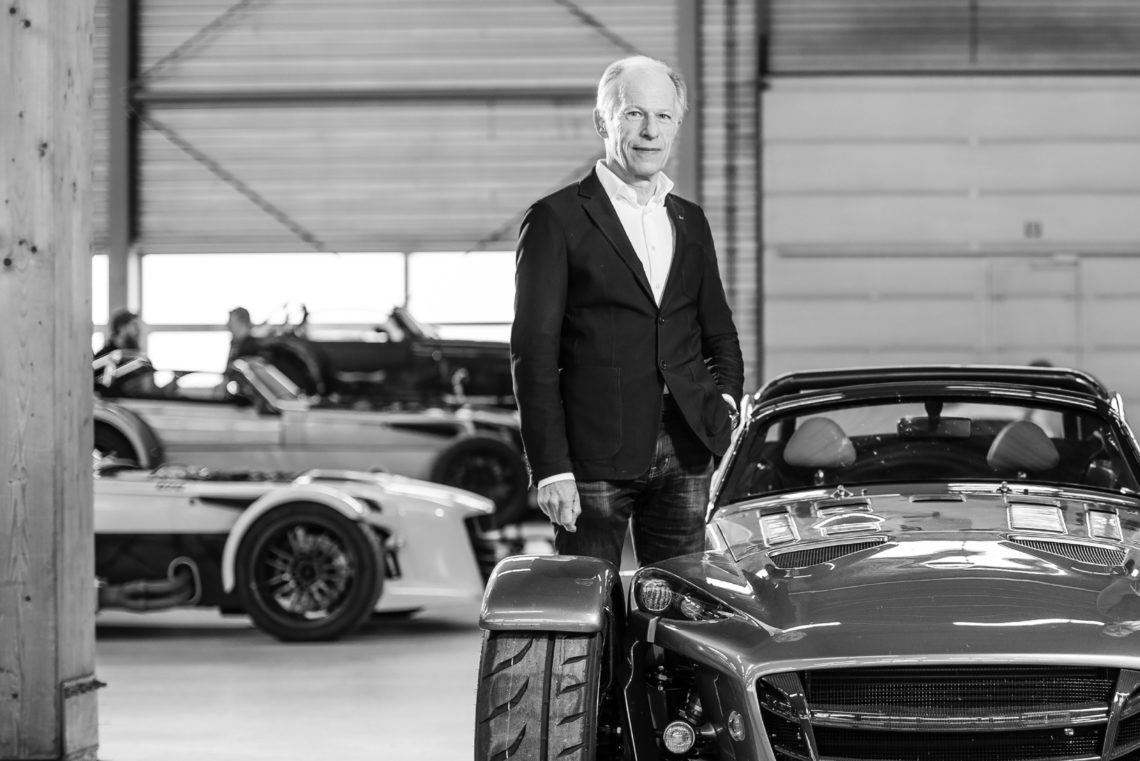 For over 40 years now, Joop Donkervoort has been searching for the perfect driver’s car, the perfect sports car. Inspired by Lotus-founder Colin Chapman’s philosophy of lightweight construction. Chapman famously once said that adding power makes you faster on straights but removing weight makes you faster everywhere. And thus, weight saving has been key for Donkervoort from day one in achieving the perfect car. Their slogan says “No Compromise” and that fits the bill quite perfectly. As a result of this, even the most hard-core, high-tech cars like the latest Donkervoort D8 JD70 weigh less than 700 kilograms.

The very first car built was the Donkervoort S7, heavily relying on the Lotus 7 by Colin Chapman and Lotus for inspiration. The similarity is pretty obvious, and more famous cars are based on this brilliant, lightweight concept. Caterham and Westfield for instance, have been building similar cars for years too. Where Caterham’s and Westfield’s interpretation remains pretty true to the original, the Donkervoort story heads into a very different direction over the years. The S7 was followed by the S8 or super-eight. 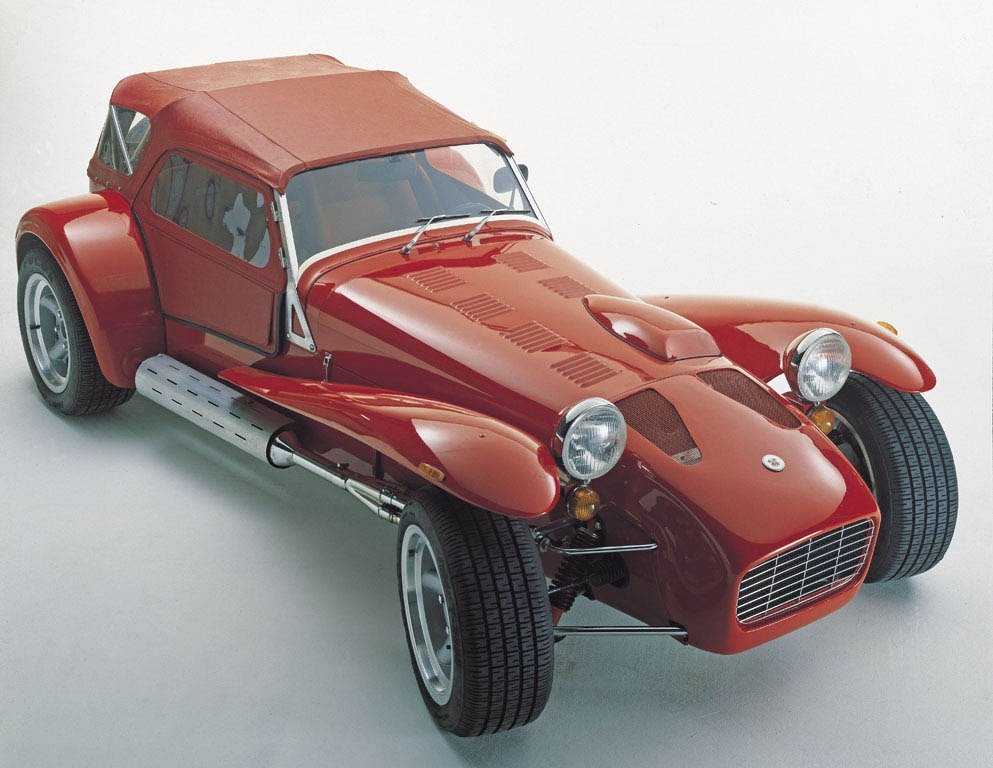 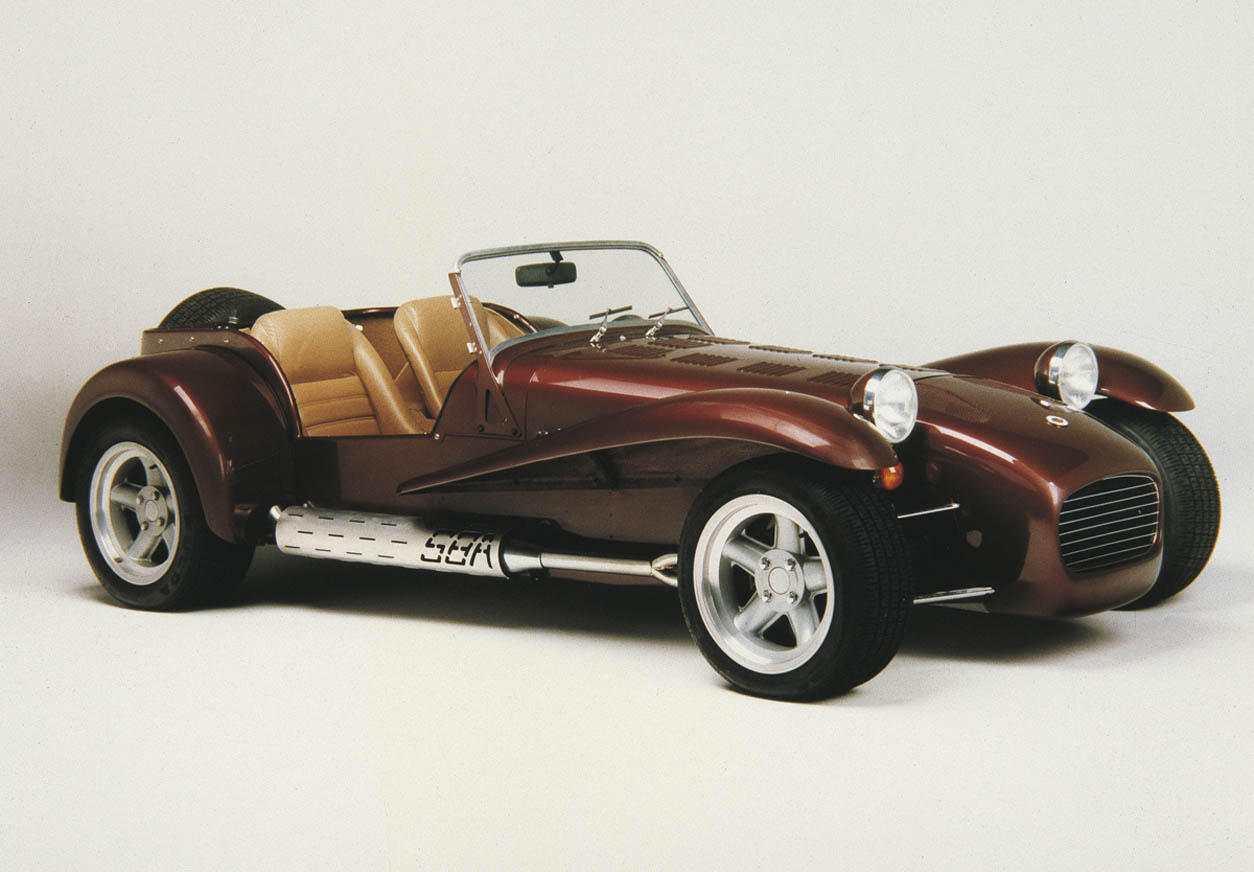 The first cars were fitted with a 1.6 litre Ford engine, later to be replaced with a 2-litre engine. Power was between 100 and 120 horsepower, pushing the lightweight car to a top speed of close to 200 kilometres per hour. Not superfast, but quite an exhilarating ride in such a small, low-slung little sports car. As the years progressed, the engines evolved alongside the car, with a 2-litre turbocharged engine in the S8AT pumping out 170bhp. In terms of design and construction, the width of the chassis was increased, safety features were improved, the wheel-arches were retouched and the front section of the car got a more distinctive look. In 1983 the company moved to the nearby town of Loosdrecht, to a larger factory. Until that moment, about 140 cars were built. 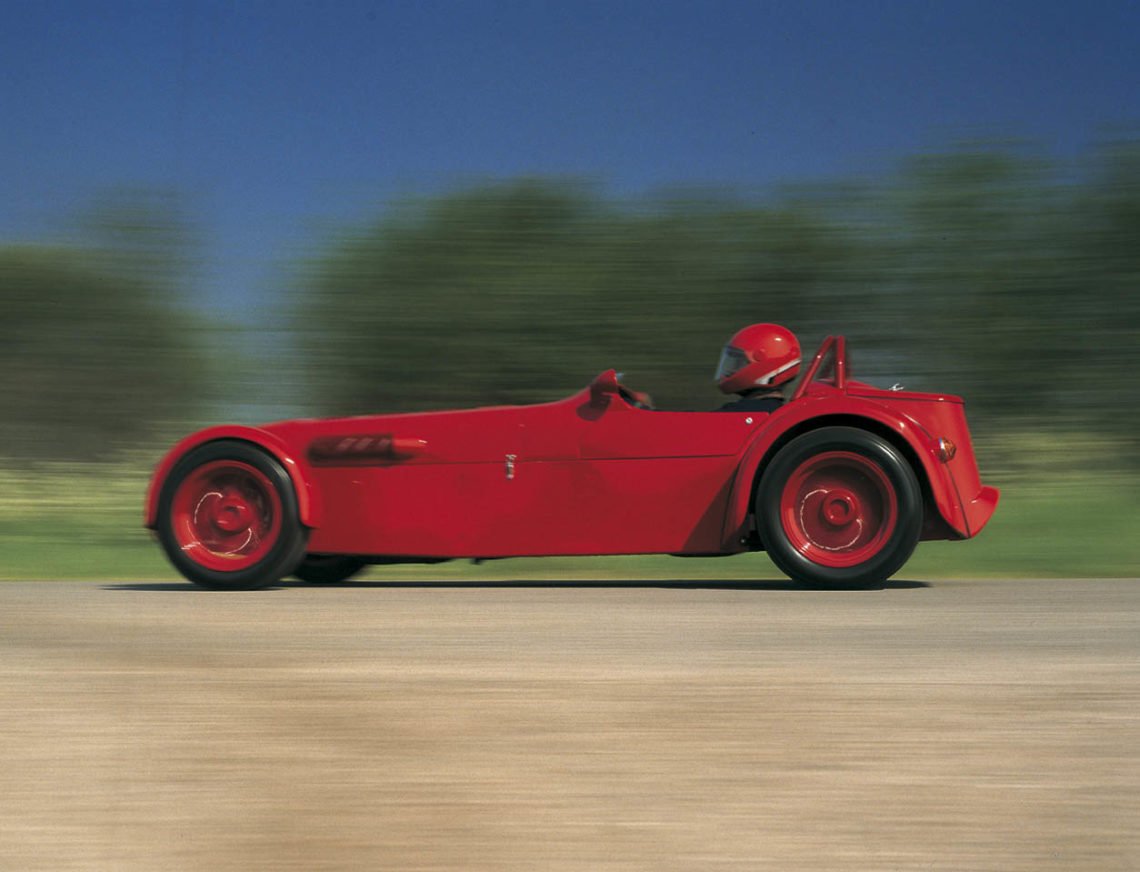 For its tenth year anniversary in 1988, the limited edition D10 was introduced at the Paris Auto Salon, with a run of only 10 cars. It lacked a windshield, further enhancing the driving experience. The car was done in a bold red paint, including the wheels and a matching helmet. This car achieved a record with the fastest accelerating vehicle to 100 kilometres an hour in 1989. On a closed road, it reached the 100kph mark in 4,85 seconds.

Moving into the nineties, the cars were gradually fine-tuned as the years passed. Small changes in design, like cycle-fenders as an option and engine updates kept the car up to date. Still using Ford engines at the time, but with increased power, the car was still able to go head to head with the most illustrious sports cars of the time. In 1995 Ford introduced a new engine, developed with Cosworth, which found its way to the Donkervoort D8 Cosworth. This new engine propelled the car to 235kph, with acceleration from zero to hundred in four seconds. But, as the production of the Ford Zetec and Cosworth engines reached its end, an alternative was needed for Donkervoort in order to continue. 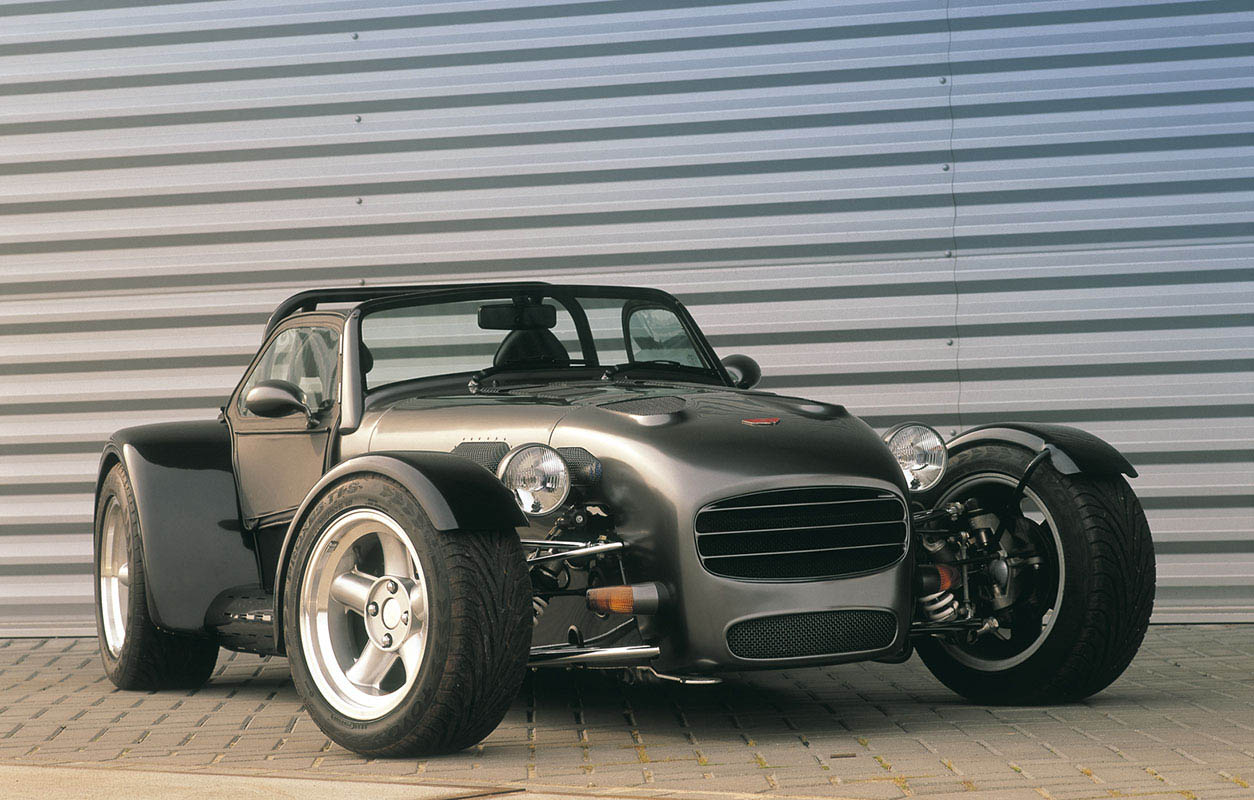 The newly found engine supplier was none other than Audi, happily supplying the 1.8-litre turbo engine also found in the Audi TT, to Donkervoort. The benefits of the new engine was a lighter, more compact build, contributing to the Donkervoort approach in building cars. With the introduction of the Audi partnership, Donkervoort also started developing and producing their own chassis in-house. The lighter and stiffer chassis made the D8 a serious car to be reckoned with, both on and off track. Since then, multiple versions of the D8 have been introduced, again gradually updating and improving the car. At one point it also held the acclaimed record lap time for production cars on the Nürburgring. In 2004 and 2005 it smashed the previous records, held by Porsche at the time, by an astonishing 15 seconds with their Donkervoort D8 RS and D8 270 RS.

In 2007 Donkervoort shocked the automotive world (relatively speaking of course) with the introduction of the D8 GT, a closed version of their critically acclaimed D8. Prior to the D8 GT, every Donkervoort has been an open-topped car, with the option of installing a soft-top if needed. The D8 GTO followed the same principle as all other cars have, again tipping the scale at under 700 kilograms.

Following the D8 GT, the D8 GTO was introduced in 2012, which was basically an entirely new car although the design remains very much recognizable as a Donkervoort. Power came from Audi’s 2.5 five-cylinder turbocharged engine, producing between 340 and 380bhp. The D8 GTO is considerably larger than its predecessors though, with a 35 centimetre longer and 15 centimetres wider body. Despite the increase in size, the weight remains the most important factor and thus it tips the scales at less than 700 kilograms. After the introduction of the D8 GTO, it evolved into a few different versions while remaining true to the original.

To this very day, even after about 40 years of continuous development on their concept of pursuing the perfect sports car, the Lotus 7 roots are still very visible. Even in the most technologically advanced, modern iterations, you can still recognize the cigar-shaped inspiration. Take for instance their latest creation, celebrating the founder Joop Donkervoort’s 70th birthday; the Donkervoort D8 GTO-JD70. As mentioned, this article was sparked by their claim this car can pull 2G in a corner. And I believe them when they say it, as the numbers and technology in the car seem to back it up. 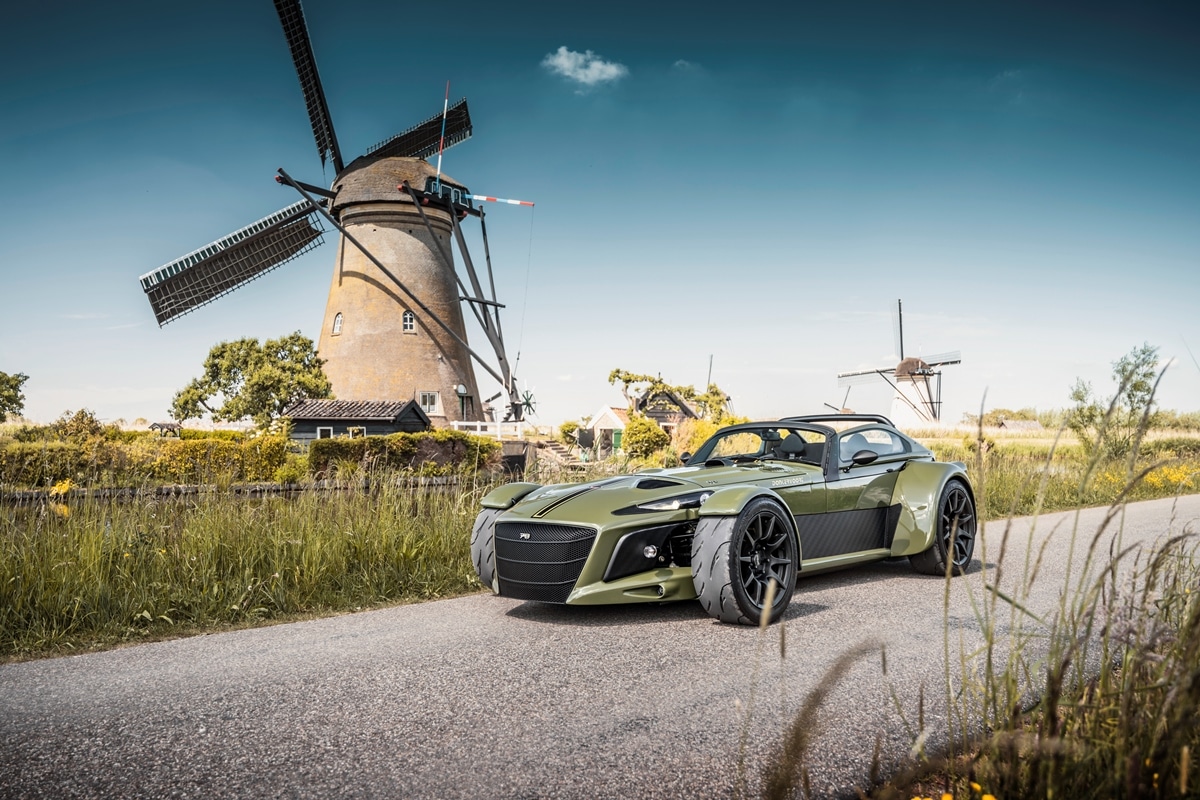 The turbocharged 2.5 litre 5-cylinder engine pumps out 415bhp. The car weighs only 680 kilograms as almost the entire body is made of a patented carbon fibre weave, left bare if desired. It features a double diffuser to push the back end down without the need of a massive wing. All this means this car is really, really fast! Zero to a hundred kilometres an hour goes by in 2,7 seconds, zero to two hundred in 7,7 seconds and it will go on to a top speed of 280kph. These specs, at least in terms of acceleration make it a threat to Ferrari’s, Porsches, Lamborghini’s, McLaren’s. Heck, even Pagani’s and Koenigsegg’s will have a hard time shaking this in a straight line (to 200kph at least). But when cornering is concerned, there’s probably not much road legal stuff that will keep up with this, whether driving on the road or on a track. Spending time behind the wheel in this is undoubtedly a hair-raising experience, especially considering the fact it lacks a roof (Soft-top is optional I believe) and your backside is only inches off the ground. A quick-release steering wheel (making getting in and out a bit easier) and a carbon fibre racing bucket further enhance the race-car feel.

And don’t mistake this for a crazy, one-man show being built in a shed. Oh no, the facility Donkervoort cars are built-in, is pretty state of the art and they have access to a test-track nearby to hone their cars. Of course, there are far more expensive, more powerful or luxurious cars on the market but you can’t really get more focused on the sheer experience of driving itself than something like this. No driver assistances, extremely manoeuvrable, very fast but seemingly usable fast, and still very, very exclusive. Since that very first Donkervoort S7 about 1,100 cars have been sold and only 70 Donkervoort D8 GTO JD-70 will be built. The starting price is just under EUR 200,000, and vast customizing options are available for each lucky owner. Now, I have always wondered if I can fit my 2.01-meter frame into one of these things to have a go. People at Donkervoort, care to try and find out perhaps?

More information on this very special company and their very impressive new car on Donkervoort.com.