Start Bloggers Corner The Petrolhead Corner – The Alfa Romeo Edition – An Ode to...

“Alfa Romeo Giulia”… Three words that resonate in my mind and immediately bring emotions. Classic, Italian, moderately-designed but oh-so-elegant, twin-cam, Veloce, Bertone, high-revs… As far as I know, classic 1950s and 1960s Alfa Romeo are what dreams are made of, and when I say dream, the reason is that these cars are simply becoming attainable. However, if you jump one decade, you’ll find a car named the Giulia, a car that might not have the same sensual curves as a Giulietta 1600 Spider, neither the straight-6 of a Sprint 2600 Coupe, but a car with an incredible aura, a perfect racing pedigree and a simplicity and a visual modesty that makes it one of the coolest, still accessible classic Italian cars on the market… And today, we pay tribute to this car. Today’s Petrolhead Corner is really petrol-loaded.

The Giulia was born in 1963, as the 105/115 Series, and produced until 1977. Whatever the version – Sprint, Junior, Veloce, GTA – the basic body shape was shared by all models and is the result of a design by Giorgetto Giugiaro for Bertone. Simply, modest, non-exuberant, the visual simplicity of this car with a more angular body than its predecessor might have given it a less collectable status for several years, but things have changed. This modesty is what makes it cool. The style is pure, balanced and has this unique 1970s rally touch that will make you think every road you’ll take is a the Turini. 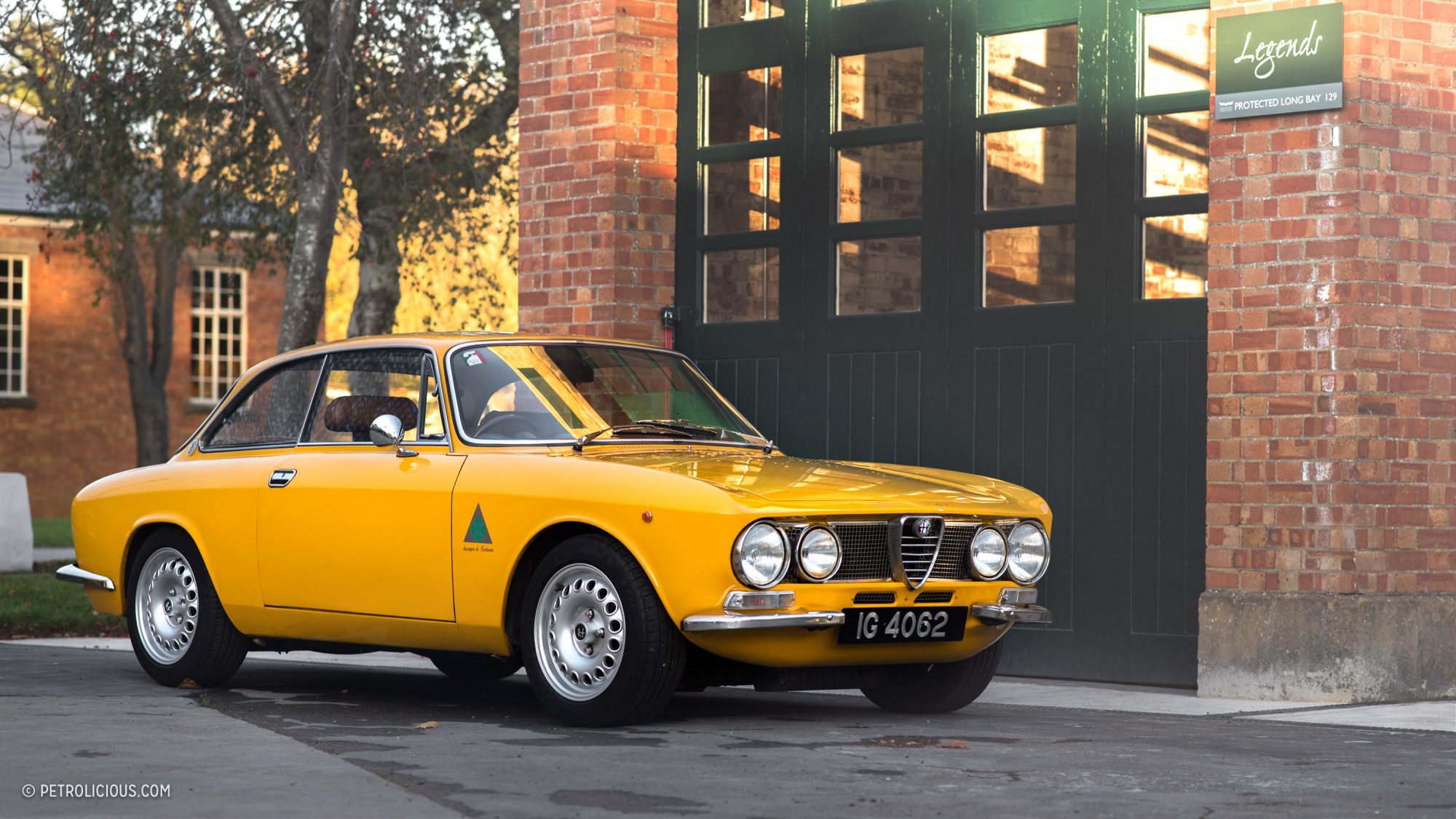 As an Alfa Romeo, it isn’t only about style, but also (and mainly) about mechanics. Back in 1963, the market was dominated by British cars like the MGB or the Triumph TR4 – admittedly two greatly designed cars, with reliably, torque-loaded engines but without sheer mechanical noblesse. Remember that these two cars featured straight-4 cast-iron blocks with single cam architecture operated via pushrods… Reliable for sure, but not prone to rev. On the other hand, the Alfa Romeo Giulia came on the market with an all-aluminium twin-cam inline-four engine which was easily capable of 6,500rpm and over 150hp if well-tuned. Best of all, and besides what people will tell about Italian classics, the Giulia was and still is reliable and relatively easy to maintain. In short, all the ingredients for an “entry-level” classic car that, once the engine, is worth every penny.

Today, the Petrolhead Corner is an ode to the Giulia… Coffee in one hand, feet on the table, enjoy some good-old Italian petrol.

“Wake Up With An Espresso Shot Of Alfa Romeo GTV”

If you’re into cars and classic automotive, the name Petrolicious should ring a bell – and if not, you should definitely take a look. This magazine is known for producing great videos and one of their series focusses on owner waking up their cars in the morning… A ritual that every classic car owner knows and love (I plead guilty). One of their episode focussed on a slightly modified, race-inspired Alfa Romeo GTV 2000 (the latest model in the series), with its large displacement engine and a comfy 130hp under the hood. The beauty of the GTV is how easily it can be modified to get the look of the ultra-rare, ultra-expensive GTA race model. Remove the bumpers, change the wheels, lower the car, give it the right exhaust and voila! The result is visible (and hearable) in the video below.

Behind the scene photos visible here, at Petrolicious.

Driving a classic car can sometimes be a hassle. Older cars were not designed for modern traffic and they hate highways – you don’t want your carb-controlled engine to be at 80%-plus of its capacity more than a few kilometres. And I’m not even talking about city-centre traffic jams that will inevitably end-up in overheating. What they need is simple; a nice, curvy countryside B-road. 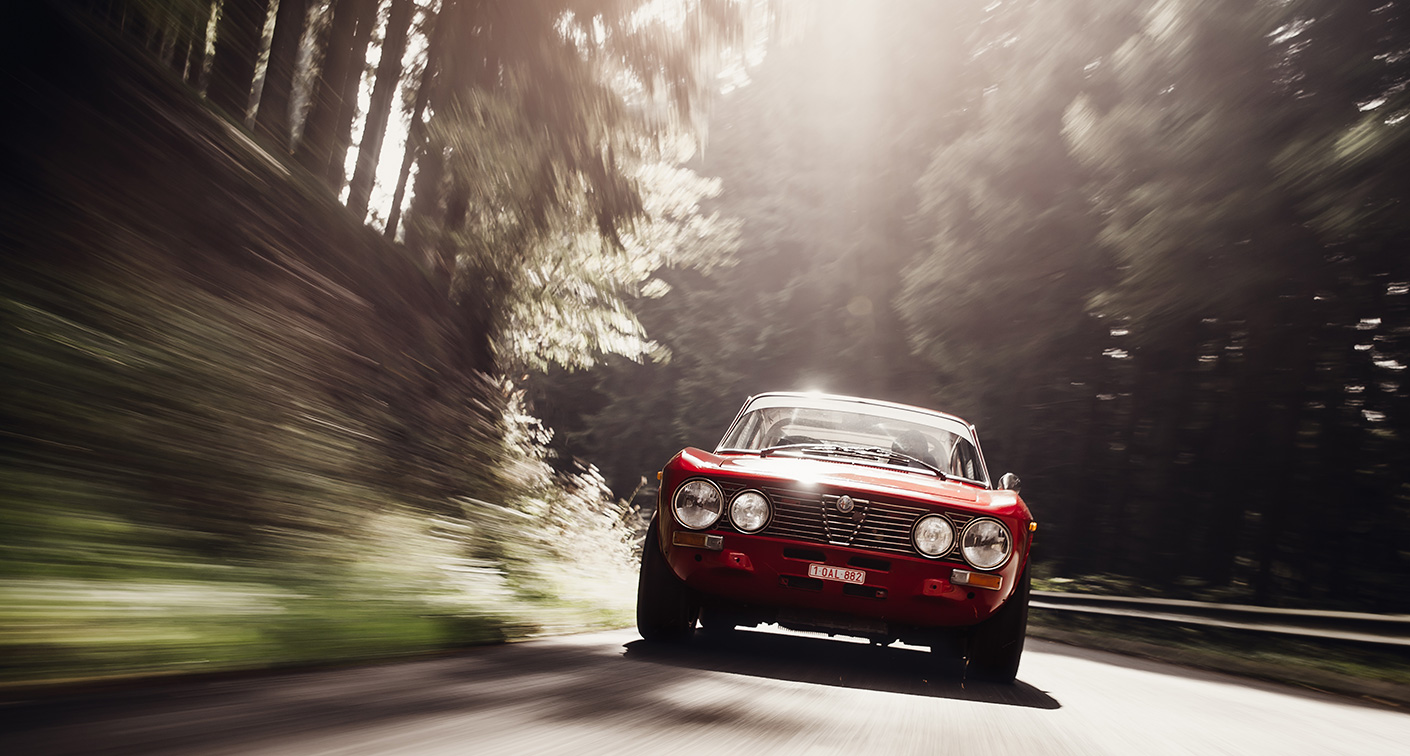 “For me, the winding forest roads provide not only a beautiful backdrop for photos, but also the opportunity to enjoy the car in its natural environment.” The owner of this GT 1300 Junior says it all. These cars are all about that; enjoying the sound and vibrations, fighting to balance the car, getting the thrill of the limit… but at 80kmh. Classic Driver’s interview of a young GT 1300 Junior owner sums up this perfectly.

You’ve probably heard already about the concept of “Restomod”, which consist in restoring a classic car and modify it with modern specs, including powerful engines and upgraded suspensions and steering. One of the most famous examples is named Singer Vehicle Design, some of the coolest restored, customized and “reimagined” Porsche 911 classics cars. But what if you apply that to the Giulia GT Coupe? That’s what the guys at Alfaholics have done, with the GTA-R 290. 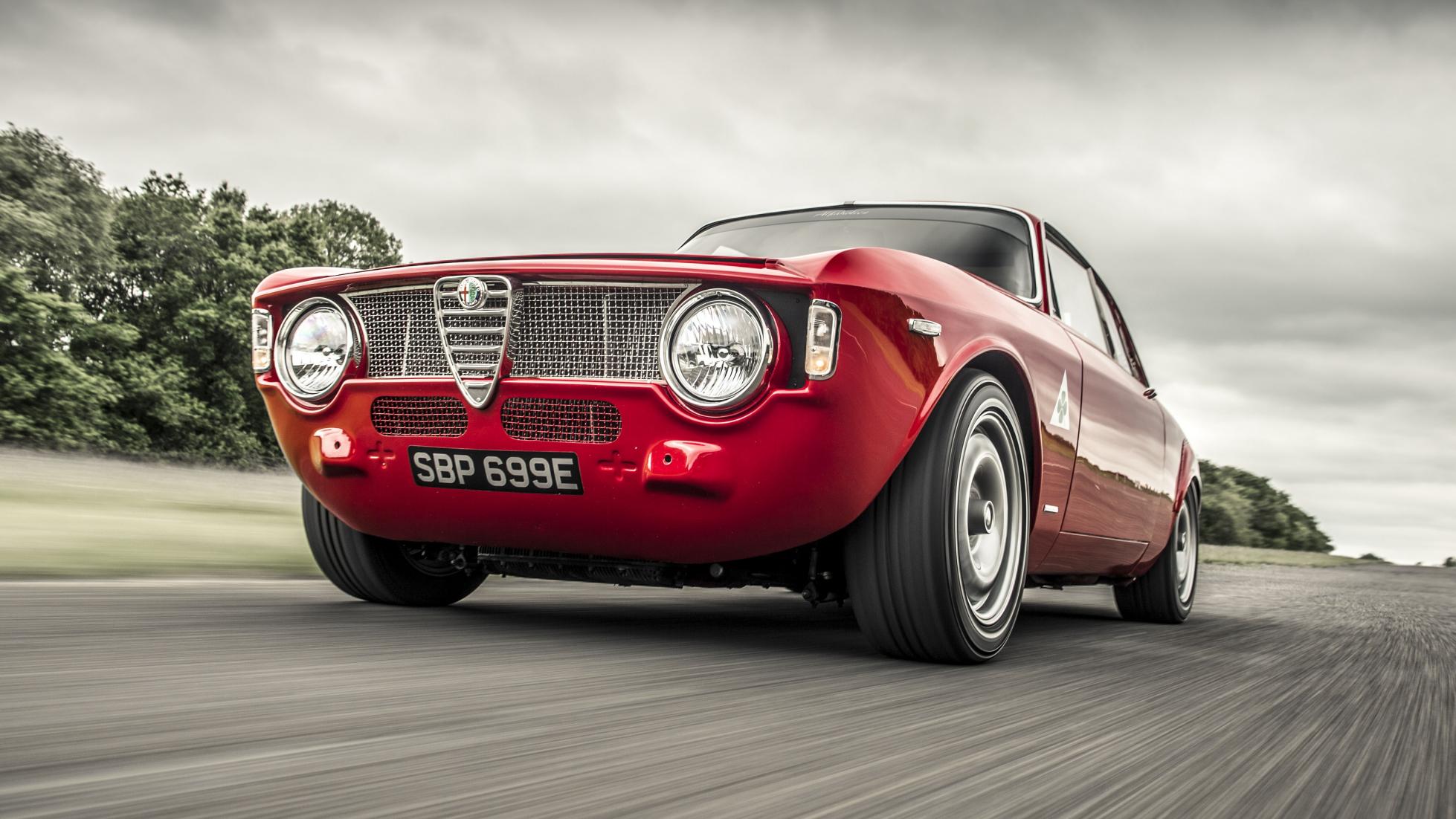 And what Mister Chris Harris has to say about it? “This is driving at its very best.” Something you can confirm by looking at the video review, produced by topgear.com.

All photos to be credited to their respective owners: Top Gear, Petrolicious, Patrice Minol for Petrolicious and Ben Kwanten Photography for Classic Cars.