Start Bloggers Corner The Petrolhead Corner – Some Of The Coolest Nicknames in Automotive History,...

The Petrolhead Corner – Some Of The Coolest Nicknames in Automotive History, Part 1

Nicknames, I’m sure we all had one at one point in our life. Personally, I am sometimes referred to as the “big guy” due to my sturdy 2.01m frame. We also have quite a range of nicknames for watches; the Rolex Pepsi, Kermit and Hulk for instance, or the Omega Speedy, Tudor Snowflake, Seiko Tuna, etc. The list is almost endless. Things are rather similar in cars, especially cars that stand out from the crowd. We all know the VW Beetle is often called “bug”, but there are more interesting nicknames out there. Some funny, some quite offensive, and mostly down to one attribute. Today we pay tribute to some of the greatest nickname bestowed on cars.

Chaparral 2J a.k.a. “the Vacuum Cleaner”

We’ve featured this car before, in our first Weird and Wonderful Automotive Innovations episode, but considering it is properly unusual and carries a few nicknames, it fits right in here. The Chaparral 2J was so extreme, they never got it running properly and was eventually outlawed. It effectively rendered itself obsolete, like so many groundbreaking race cars before and since. 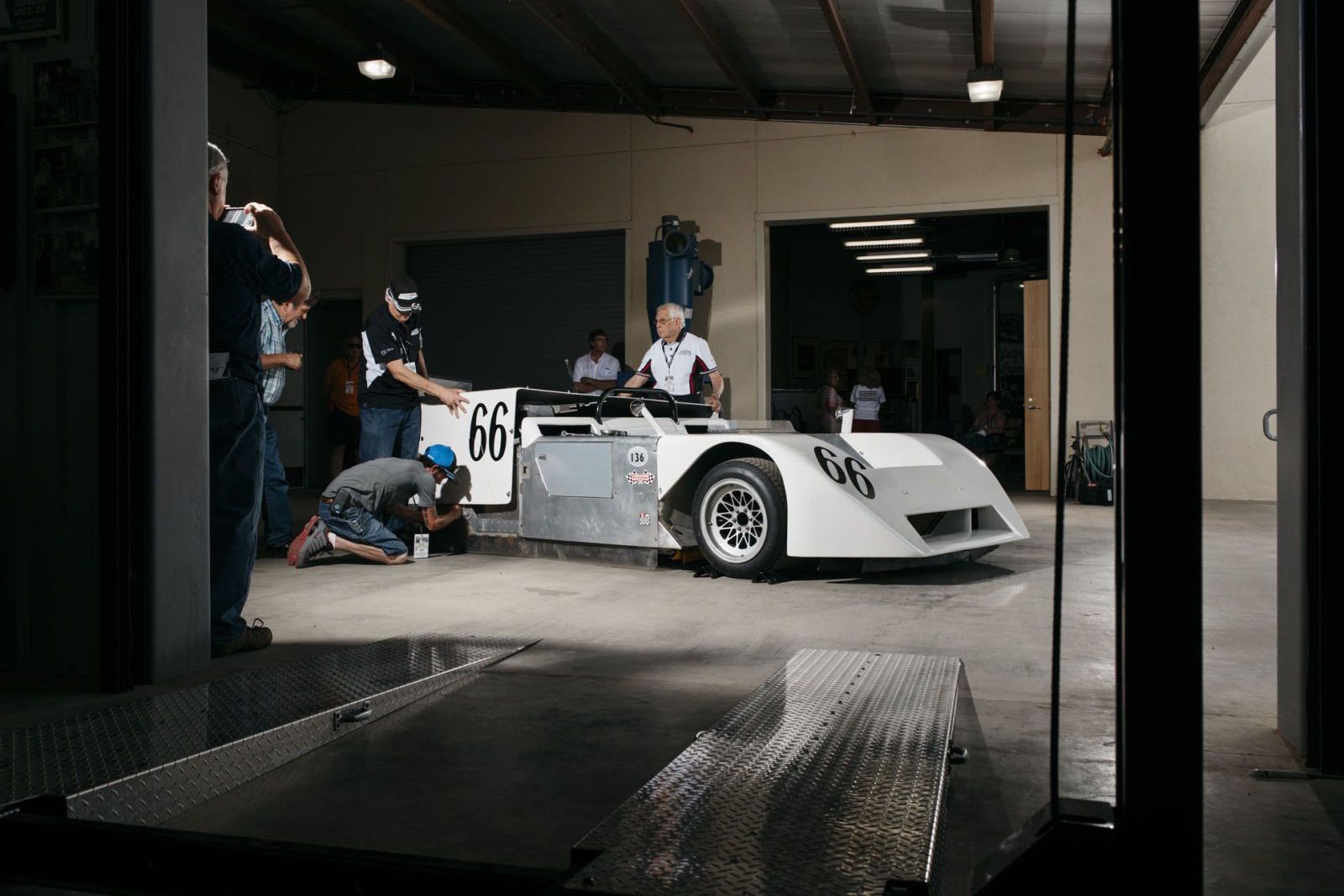 Chaparral was known for developing radical new technology, including moveable wings that could lay flat in the straights and reduce drag, and famously this 2J. The Chaparral 2J is the ultimate ground effects machine, with a square box for a body, Lexan sheets on the sides and back to trap air and an axillary engine out of a snowmobile to suck that air from underneath. It was unreliable, but when it did work the cornering speeds were astronomical compared to the competition. The skirts and secondary engine made it stick to the road like glue and hugely increase its grip. It earned the car two nicknames, the Sucker Car we included in the article from last year and the Vacuum Cleaner as a second. Oddly fitting, don’t you think?

People might think the current Nissan GT-R is the proud owner of the Hollywood-like nickname Godzilla, but in fact, it is credited to the Nissan Skyline R32 GT-R race car that blew the doors of everything else it raced against. That very car earned the “Godzilla” reference by competing and winning the 1991 by a staggering 21 laps over the runner-up Porsche 911 Carrera 2. It also managed to win the 1991, 1992 and 1993 Group A championship in Australia, and the Bathhurst 1000 twice in a row. Even more impressive is how it performed in the All Japan Touring Car Championship. It competed in 29 races spread over four seasons. And guess what? It won them all. 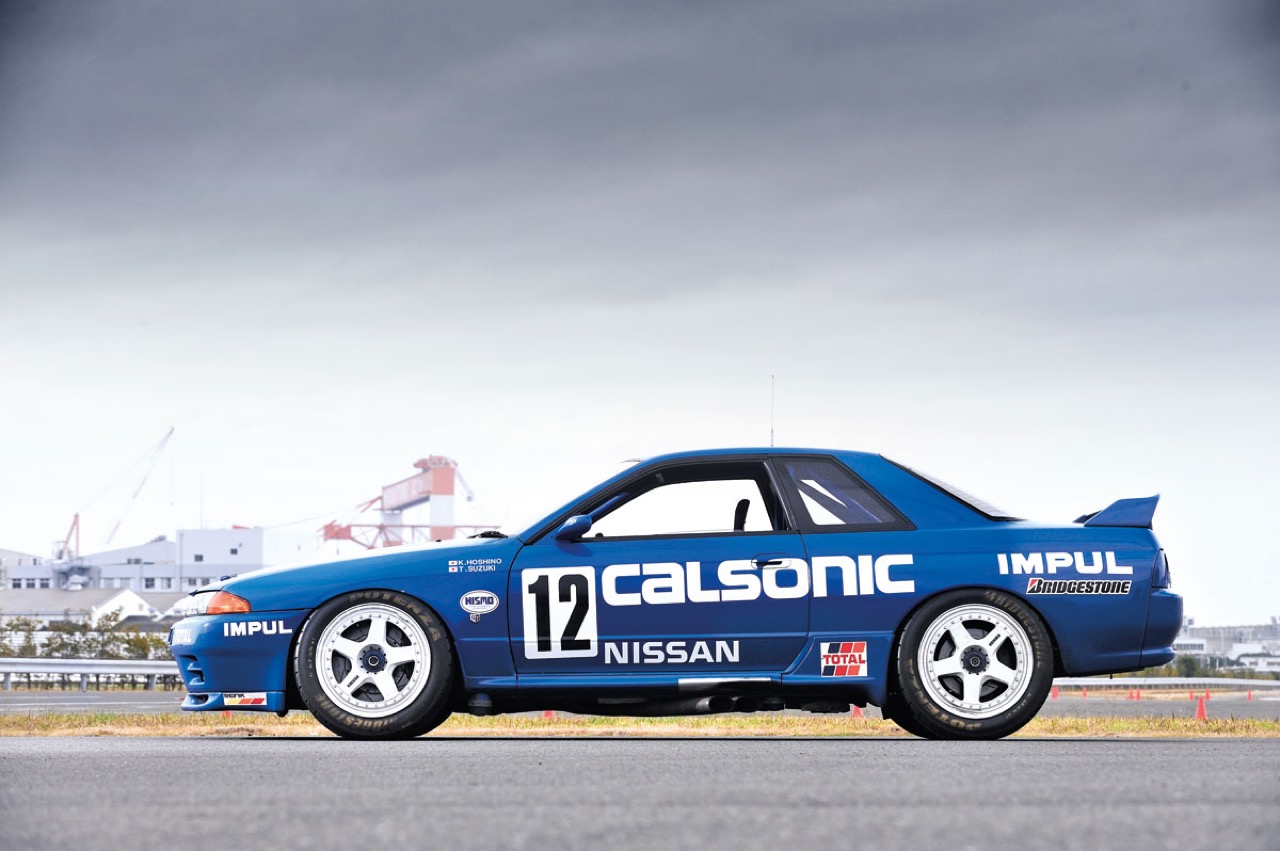 The car was so good thanks to its 650bhp straight-6, twin-turbo engine paired with all-wheel drive and -steering and computer-controlled torque-split. Evo.co.uk compared it to bringing a machine gun to a knife fight. Perhaps the most famous iteration of the Nissan Skyline R32 GT-R is the blue-and-white Calsonic car, winning both the first and last season of the JTCC. The Australian press is responsible for the fitting “Godzilla” nickname and it stuck big time. Here’s footage of the car by Evo.co.uk:

Back in the twenties and thirties, aerodynamics in cars were still in its infancy. Despite not having computing power and wind tunnel technology, lots of people experimented with designs in order to make cars perform better and better. One of the most interesting cars that ran in the thirties was the little blue 1923 Bugatti Type 32, fitted with a rather rudimentary streamlined shell. The car isn’t what you would call pretty, but that makes it all the more fascinating.

Bugatti built the unusually small car around their straight-8 engine early Bugatti-cars were known for, and was intended to compete in the 1923 French Grand Prix, held in Tours. It wasn’t very successful and out of the four cars built, only one managed to finish. The unconventional body was more or less shaped like a wing of an aeroplane which meant the car would lift a little when pushed hard, making it unstable at high speeds. The combination of this body, and the location of its only race, meant it would be forever known as the Tank de Tours. It was replaced with Bugatti’s most successful car ever, the Type 35. Later, in 1935 Bugatti would build another “Tank” car, the Type 57G Tank.

Jalopnik has more details about this radical Bugatti.

None of the cars on this list are as subtle and elegant as this one, the 1961 Ferrari 156 Formula 1 cars. Ferrari was known for scrapping obsolete racing cars after it was replaced by a newer, faster car and that fait was bestowed on all 156’s. The 1961 season proved successful for the Scuderia, with both Phil Hill and Wolfgang von Trips being in contention for the title. The season would end in tragedy, as Von Trips fatally crashed during the Italian Grand Prix at Monza, the race he and Phill Hill would decide who took the trophy back home to Maranello. 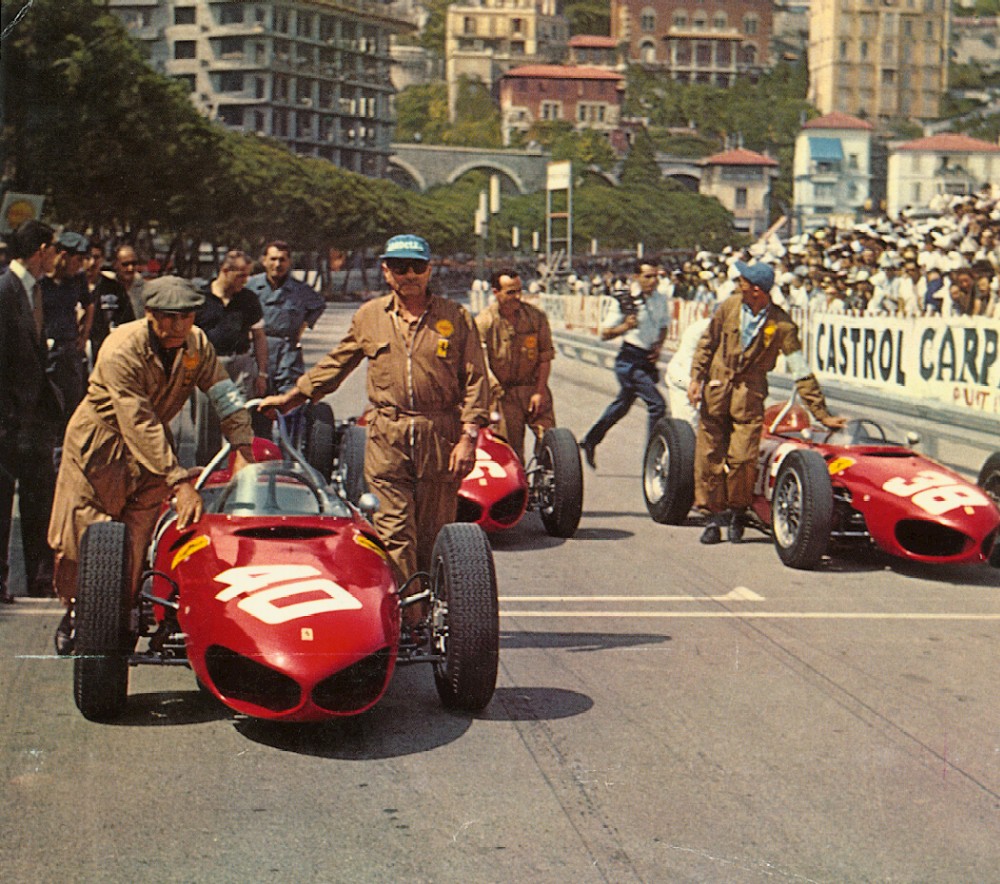 The Ferrari 156 earns its nickname due to the sleek, double-nostril front of the car. Looking at it head-on, it’s easy to see why. The cars competed under the new 1.5-litre stipulations. This produced some of the most delicate yet elegant looking cars ever. Tubular chassis, wire wheels, sleek bodies. Fantastic stuff! As mentioned none of the original Sharknoses exist, but American (living in Italy) collector Jason Wright commissioned specialist Stetford & Company to recreate two of these famous cars. Stetford & Company specialize in restoring and recreating historical racing cars, and built two inch-perfect replica’s. One is fitted with the original 65° V6 and the other with the later 120° wide-angle V6. 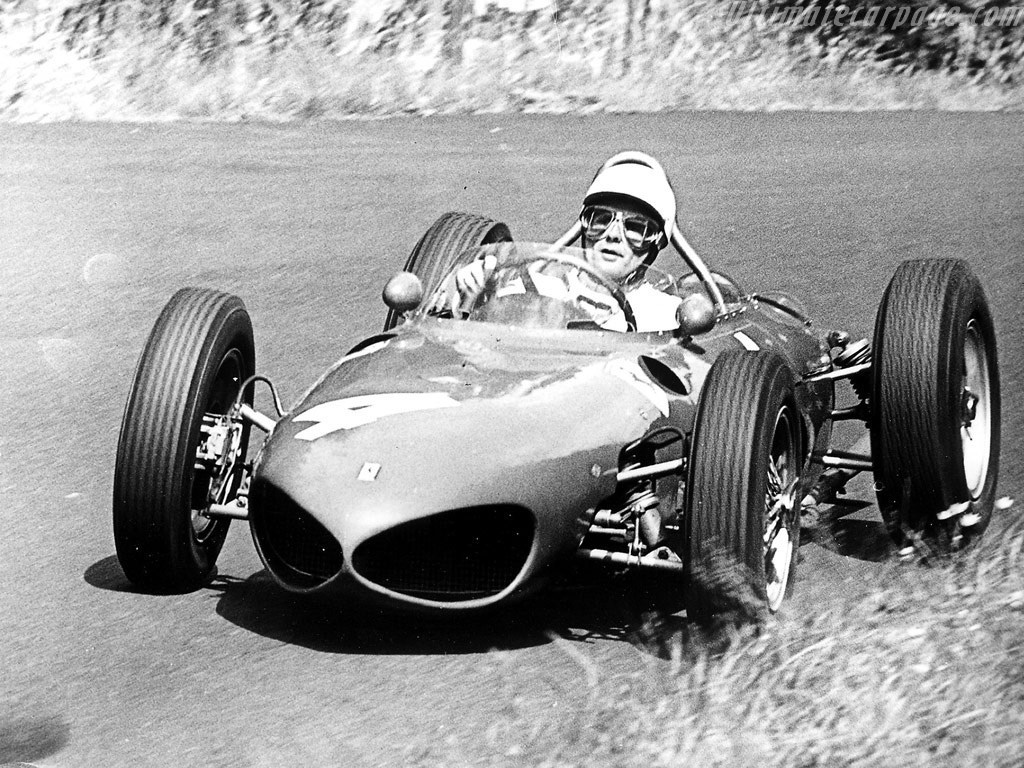 Goodwood has the full story on these cars, both original and recreation.

If you know this car, you can fully understand the name people gave to this car. It was such a departure from the sharp-edged sportscars Lamborghini was known for, it is often ridiculed. It is a very large, square bodied off-roader with the V12 from a Lamborghini Countach 5000QV under the bonnet. “Rambo Lambo” is the perfect name for it as it looks like it came straight out of a dystopian action movie from the eighties. 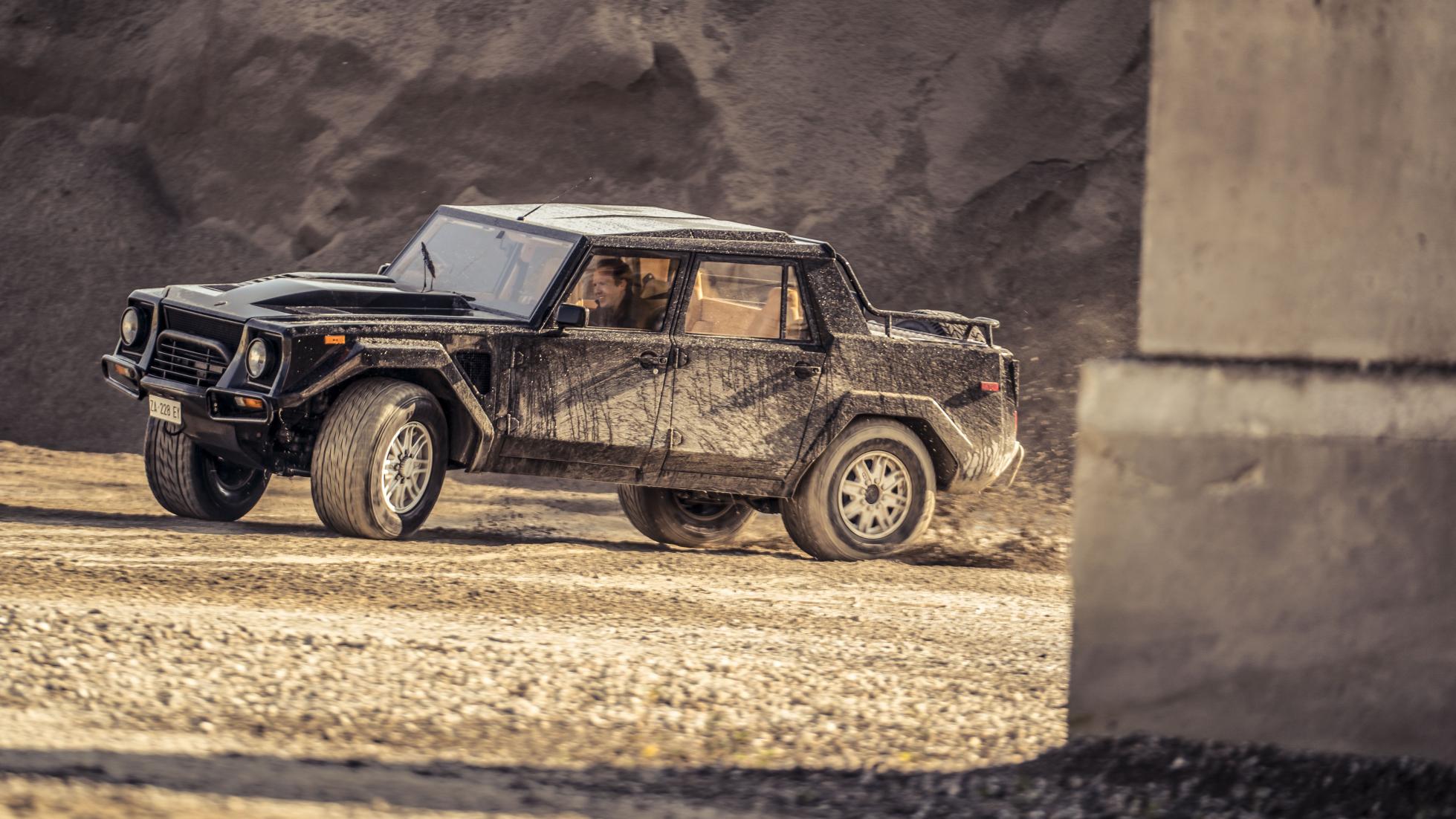 Some of the details on the LM002 are pretty special. The 5.2-litre V12 engine has 450bhp and was simply shoe-horned from the Countach into this thing. The interior is fully covered in Italian leathers, thick carpets and features a roof-mounted stereo. Tires on this thing were specially made by Pirelli and measured a massive 325 all around. In comparison, the rear-tires of the Countach were 345 so the LM002’s were only slightly less wide.

So how did this unusual car came about? Simple. Lamborghini was looking for a chunk of the huge military budget the US was spending on their military defences and decided to develop an all-around utility truck. The first prototype, in the late seventies, was rubbish and it lost to the Humvee. In 1981 they took another shot and updating the original concept, but it was still rubbish. Their third attempt became known as the LM002 but eventually wasn’t picked up. Lamborgini turned it into a civilian version and managed to sell about 300 of them before pulling the plug.

Top Gear has an interesting story about it, including insights from an LM002-owner. (images above by Top Gear)

The Porsche 917/30 has multiple nicknames, one of which is the Canam-Killer. It was such a dominant racing car by Porsche that it single-handedly killed off the Canadian-American Challenge Cup or Can-Am. It was an 800-kilogram, 1,600bhp monster and the ultimate iteration of Porsche’s famous 917 family of sports prototypes. The Gulf liveried 917K is perhaps the most famous one, as it featured in the cult-classic Le Mans movie with Steve McQueen, but the 917/30 would eat it for breakfast. 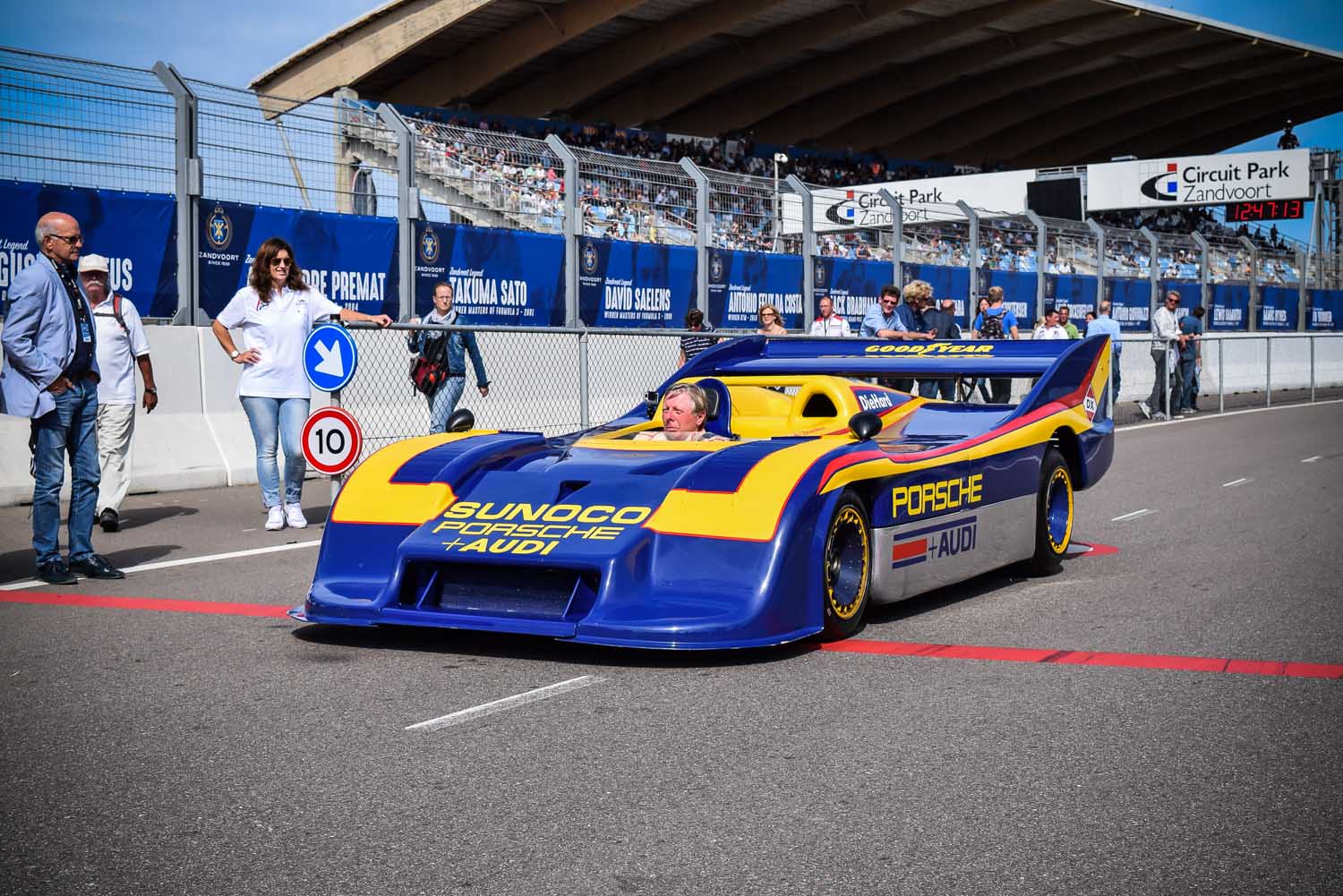 For the 1973 season, Porsche enlisted driver Mark Donahue to pilot their mighty machine. In striking blue and yellow Sunoco colours, it would demolish the opposition and win six out of eight races. The Porsche 917/30 came in first, with privateer Porsche 917/10’s coming in second, third, fourth, sixth and tenth in the driver’s championship. The name “Turbo Panzer” came from the immense levels of boost the 5.4-litre twin-turbo flat-12 could run at, combined with the reliability it had. In the whole season, it never failed to finish once. During qualifying they would run it at 40psi of pressure, resulting in 1,600bhp. In race trim, they turned it down to a still staggering 1,100bhp but it still lapped about two seconds faster than anyone else. It is by far the most powerful closed circuit race car ever built. 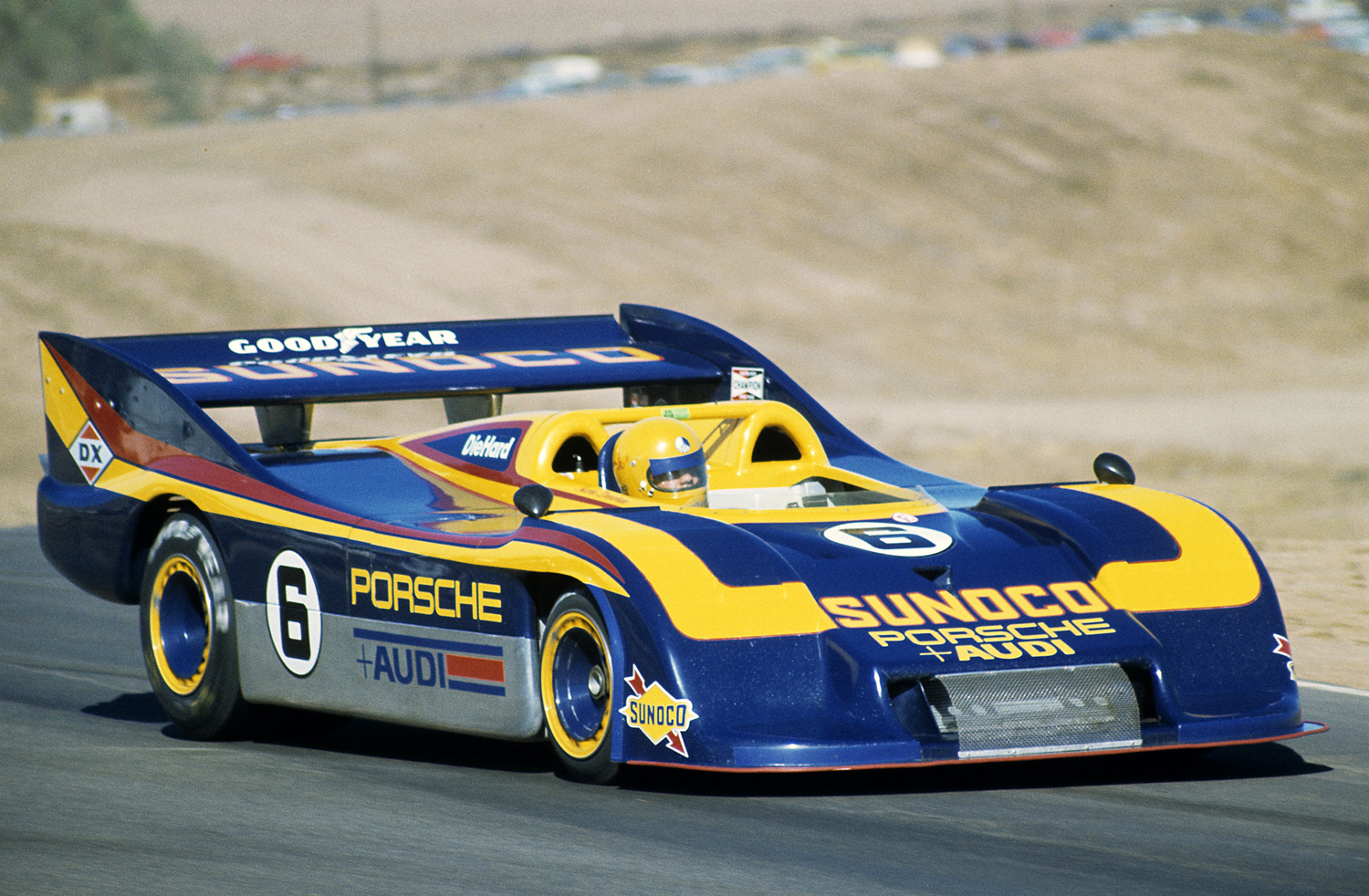 The Turbo Panzer is covered by Octane Magazine who had the rare opportunity to drive it.