Saturday means our weekly car-related column is live… So yes, this episode will be focused on cars and motorsport, but as we’re also a watch magazine, we’ve decided to mix it with glorious watches too… And what a match it is! This week’s Petrolhead Corner links fearless motorsport, champagne sprays and a “rarely seen on the wrist” vintage, 1960s Breguet Diver – an elusive watch known to be one of the rarest dive watches ever produced, regardless of brand. And all of that is due to one man: Dan Gurney.

If you are a fan of motor racing, you can clearly visualize the ‘what has become routine’ act of champagne spraying between first, second and third-place drivers on the podium. This has a become a must, whatever the racing category. 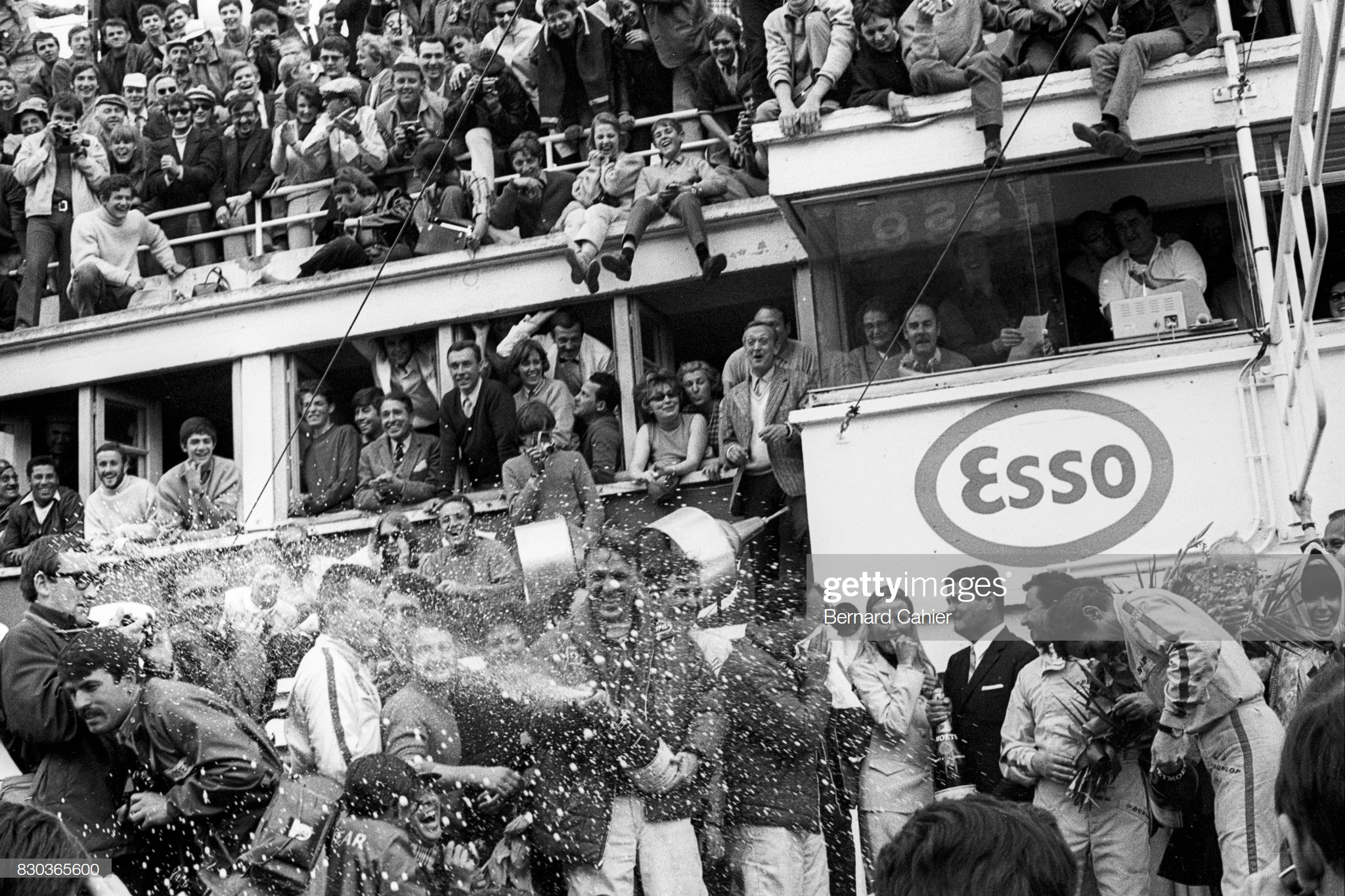 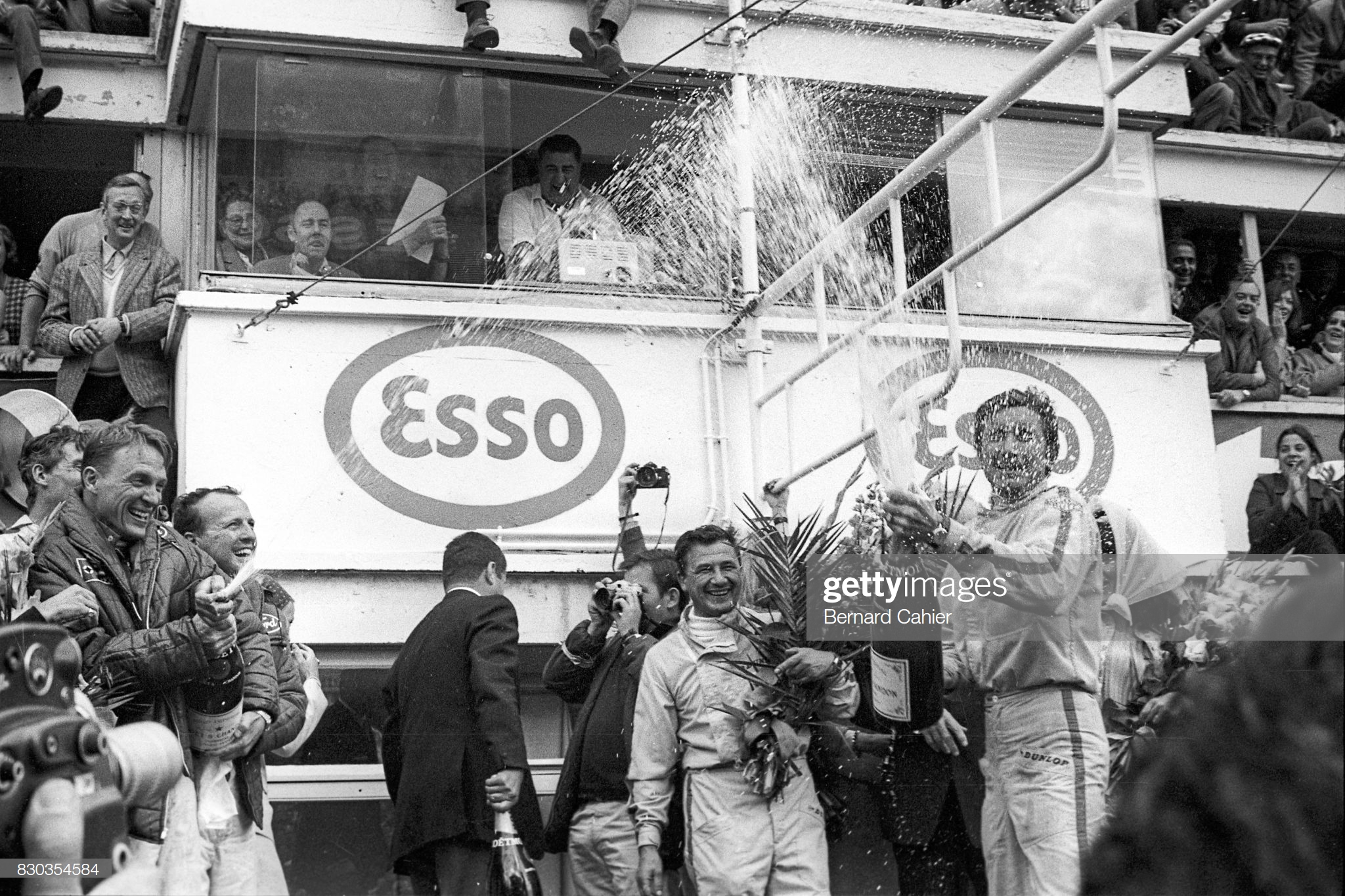 The first person to spray his contenders with champagne was the American racing driver, Dan Gurney. He participated in several categories (usual back in the days) such as Formula One, NASCAR and Indy Car. He won the 1959 12 Hours of Sebring while racing a Ferrari 250 TestaRossa for the Scuderia Ferrari, with fellow drivers Chuck Daigh, Phil Hill and Olivier Gendebien. 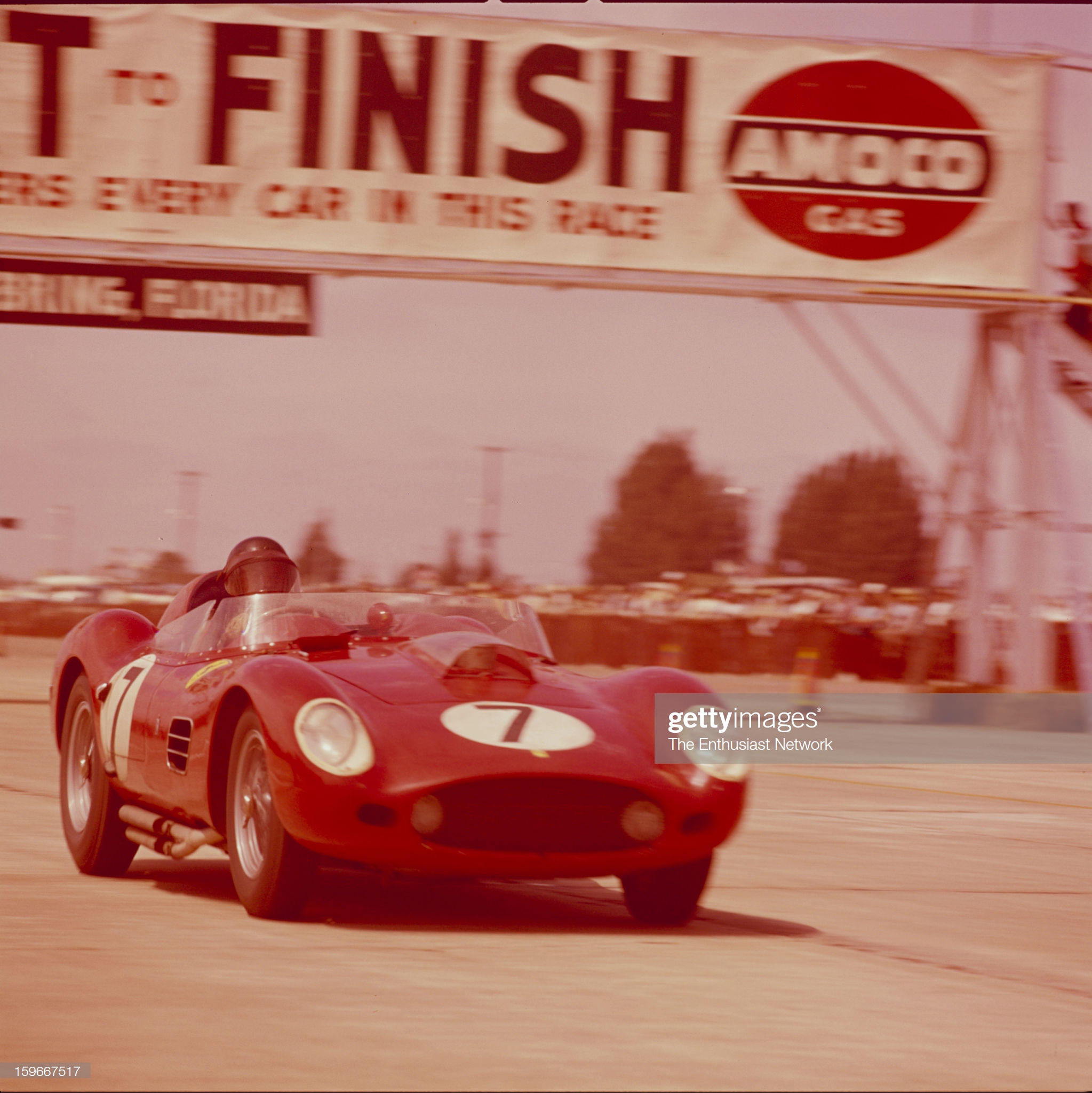 Dan Gurney at the 12 Hours of Sebring 1959, with his Ferrari 250 Testarossa – Photo by Bob D’Olivo/The Enthusiast Network via Getty Images/Getty Images Gurney won the 1967 24 Hours of Le Mans with fellow American driver A.J. Foyt, driving a Ford Mk IV for Shelby-American Racing. Gurney spontaneously sprayed the bottle of champagne given to him on the podium, establishing what has now become a motorsport tradition.

When it comes to wristwatches, Gurney also was a winner! He wore a couple of Rolex watches while racing but one, in particular, stands out. Gurney wore a reference 6234 chronograph on a steel bracelet. 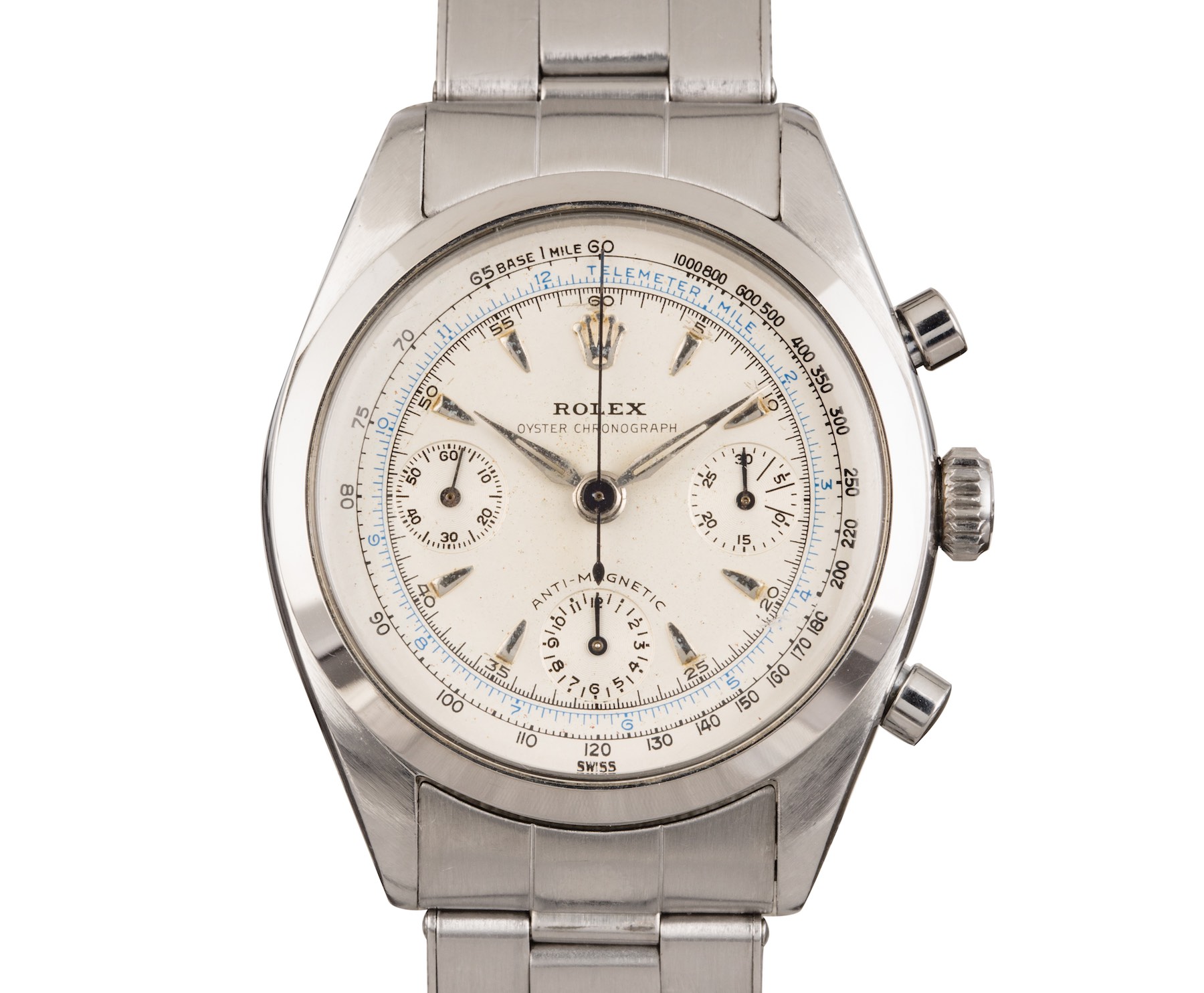 An example of Rolex 6234 Chronograph, as worn by Dan Gurney – Photo by Christie’s

The 6234 is the grandfather of the famed Daytona chronograph. Gurney is the first driver that I have come across wearing a 6234 while racing. He also wore a stainless steel Datejust on a Jubliee bracelet, later on in his racing career. 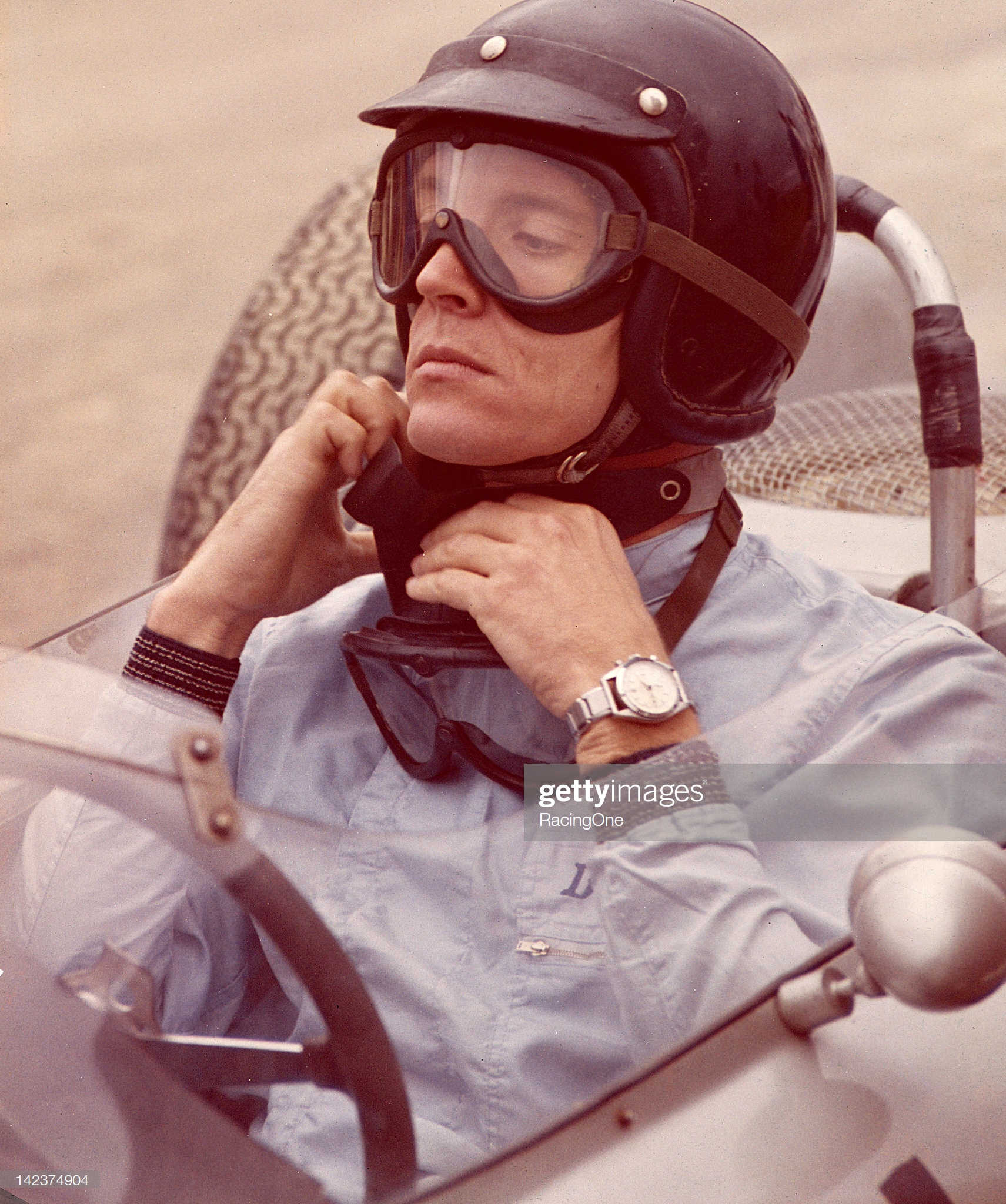 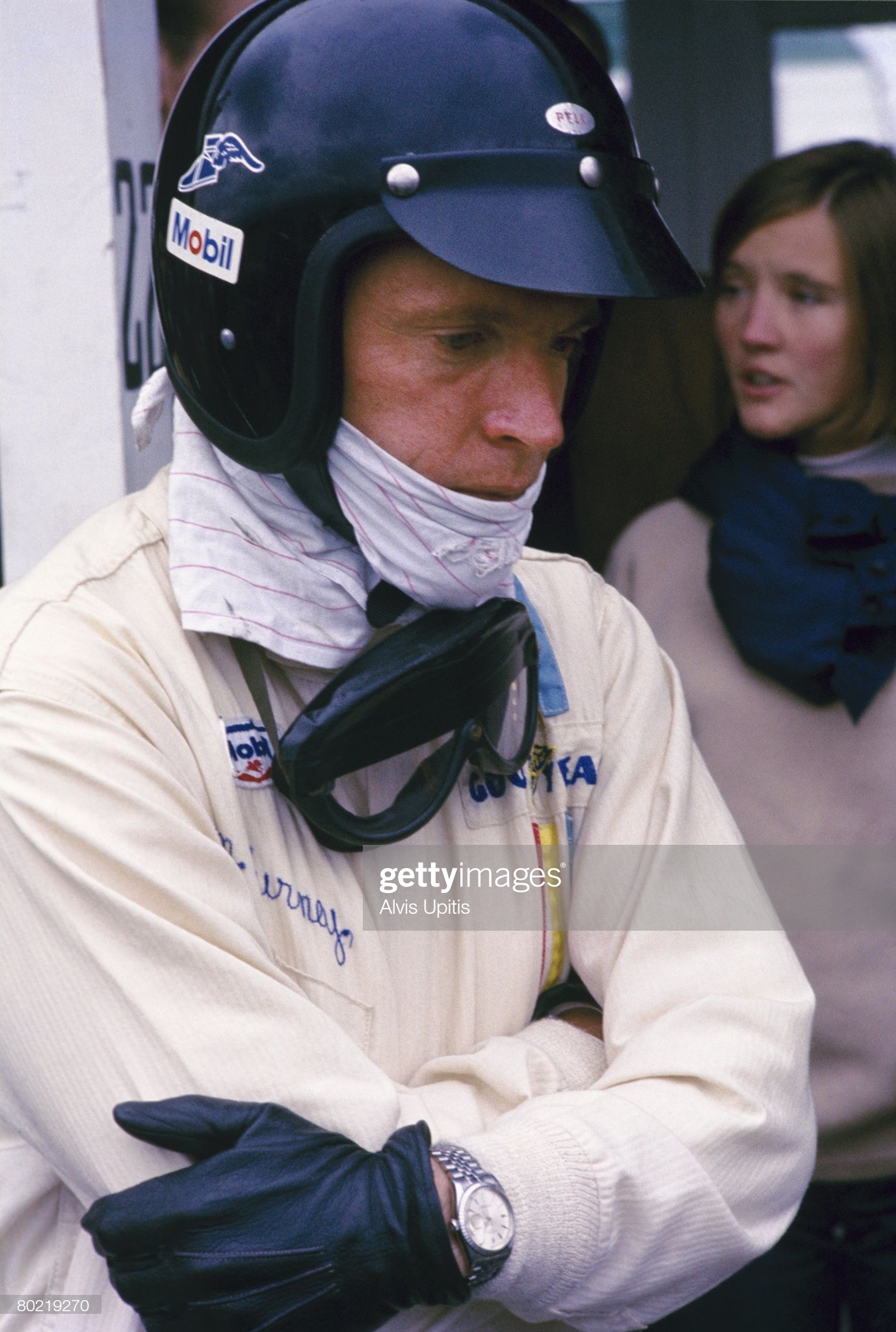 I have kept the most interesting watch for last. I came across a photo of Gurney at the 1965 British Grand Prix at Silverstone, wearing a timepiece that I have read about before but never seen on anyone’s wrist. The watch was not designed for motor racing but for the depths of the ocean, which makes the discovery even more interesting. 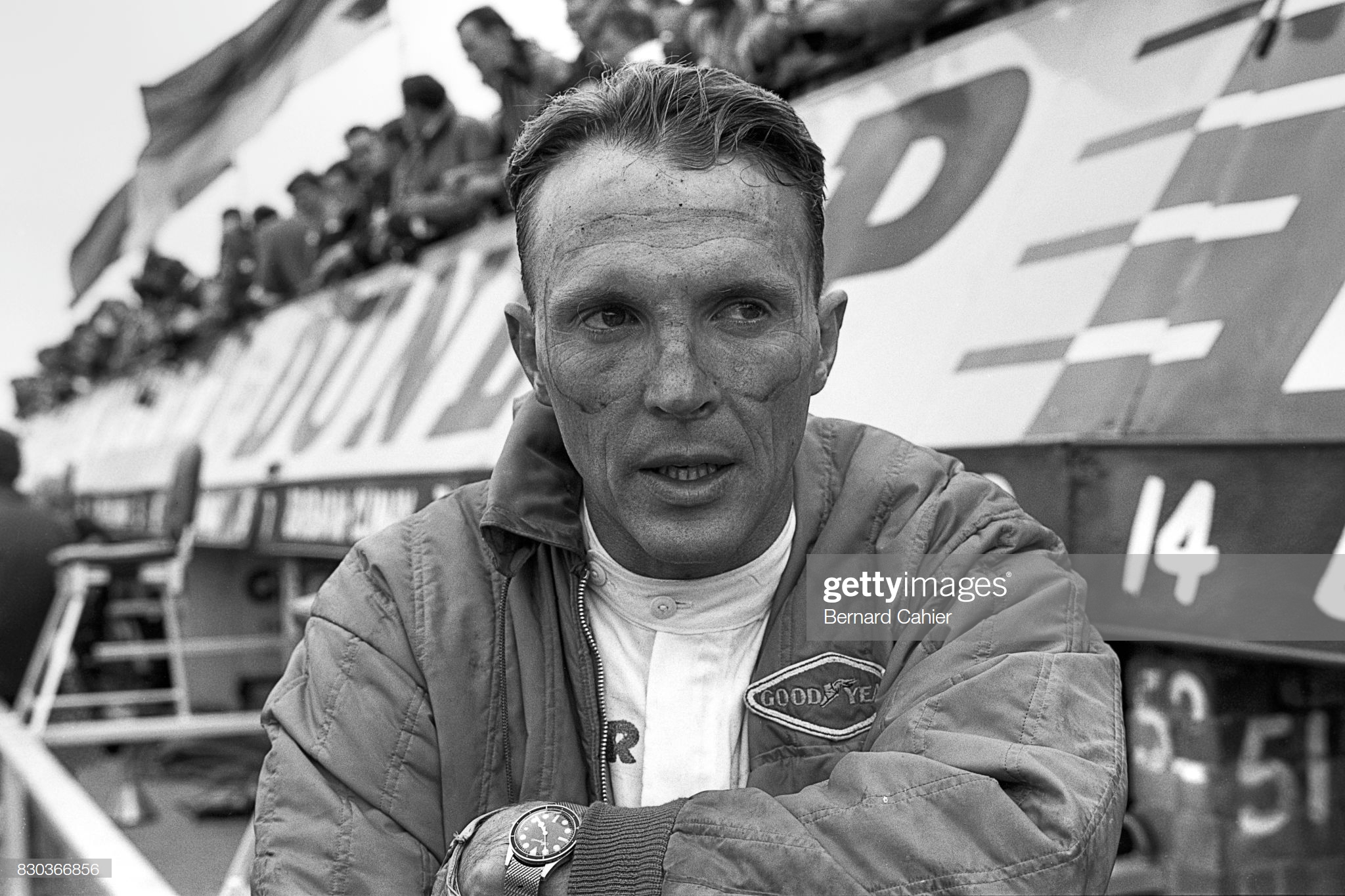 As spotted on Dan Gurney’s wrist was a Breguet Diver. The photo is very striking, as you can still see the imprint of Gurney’s racing goggles around his eyes and forehead. The watch catches your eye immediately, due to the extremely large luminous hour markers, bakelite diving bezel and the steel mesh bracelet. 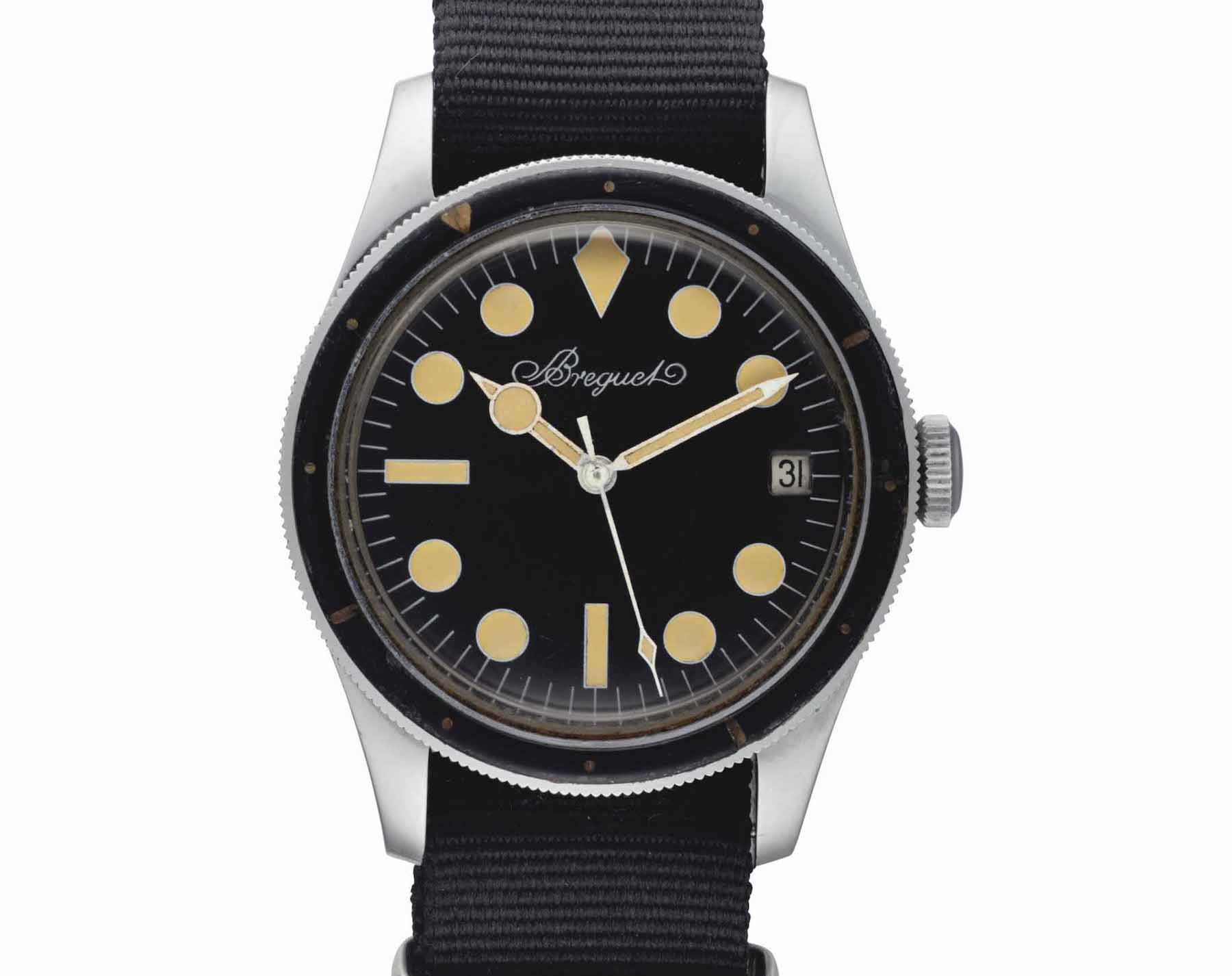 An example of this rare Breguet Diver, as worn by Dan Gurney in 1965 – Image by Christie’s

The pièce de résistance is the signature on the dial, in cursive script, which says Breguet. How did he come to acquire the watch…? I don’t know, and I cannot recall many other racing driver wearing a diving watch for motor racing. It is also the first time I have seen someone wearing this very special Breguet Diver. 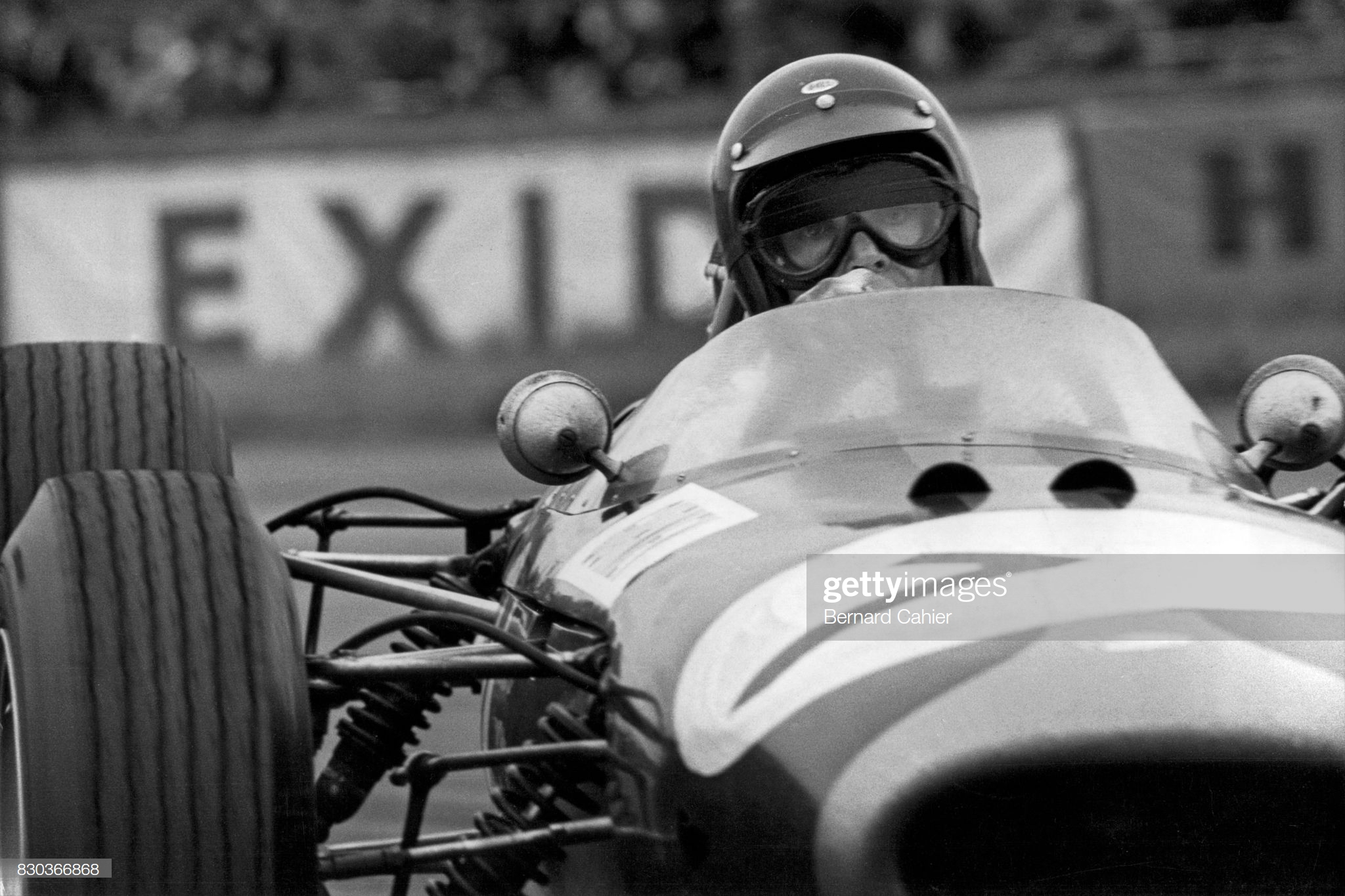 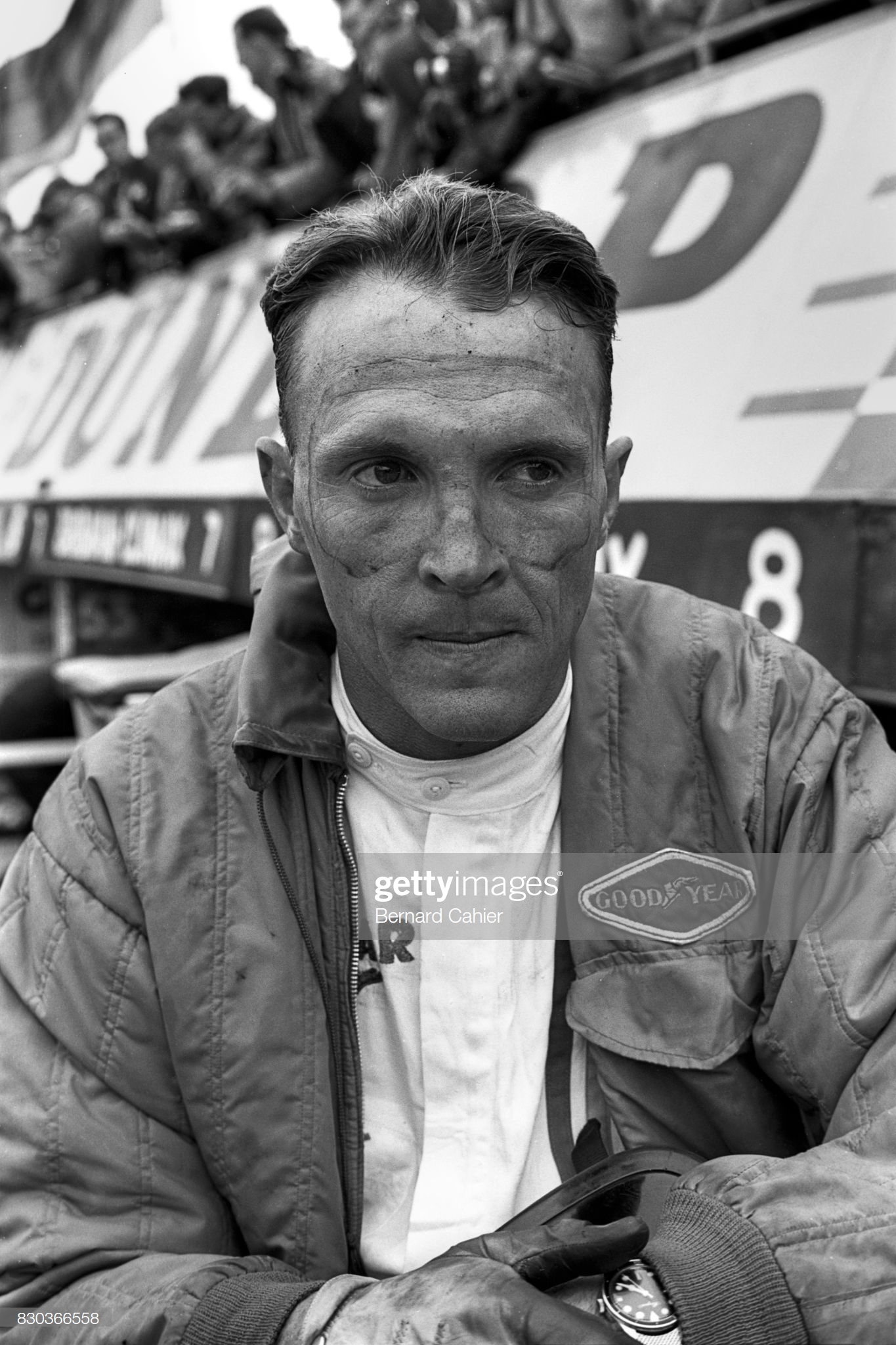 As far as I can recall, the earliest previous sighting of a dive watch on someone’s wrist while racing was Steve McQueen wearing his Rolex Submariner reference 5512 – at Sebring in 1970. But this Breguet really is something special!