By now you’re well aware that the MONOCHROME team is not only passionate about watches (well, duh!) but also has a thing for everything car-related. Our weekly column « The Petrolhead Corner » is where we let our hair down and put our feet up for a bit of fun and games. Yet, when both worlds collide we take notice and get that little bit more excited, as you can expect. So today, the latest collaboration between IWC and Mercedes-AMG fuels our automotive needs some more with the IWC Pilot’s Watch Chronograph Edition “AMG” IW377903.

The focus here is on two three-letter abbreviations, both very easily recognized within their own field of expertise; IWC and AMG. While officially known as Mercedes-AMG as it has been an integral part of the Mercedes Group since the early nineties, those three letters are enough to get most gearheads buzzing with excitement. Us included!

Now we all know that AMG has started out life as a tuning shop by former Mercedes-engineers Werner Aufrecht and Erhard Melcher in Groβaspach, Germany. This was back in 1967 and the two quickly made a name for themselves by building some excellent performance machines based on Mercedes cars. One of the most stunning pieces of work was the 1971 Mercedes 300 SEL 6.8 AMG, perhaps the most unlikely cars ever built by the two. Power was up from an already impressive 250bhp to a staggering 428bhp. This huge monster of a car, known as “Die Rote Sau” (the Red Pig) blew the doors of pretty much everything during the 1971 Spa Francorchamps 24 hour race. It came in first in class, and second overall, against some stiff competition. 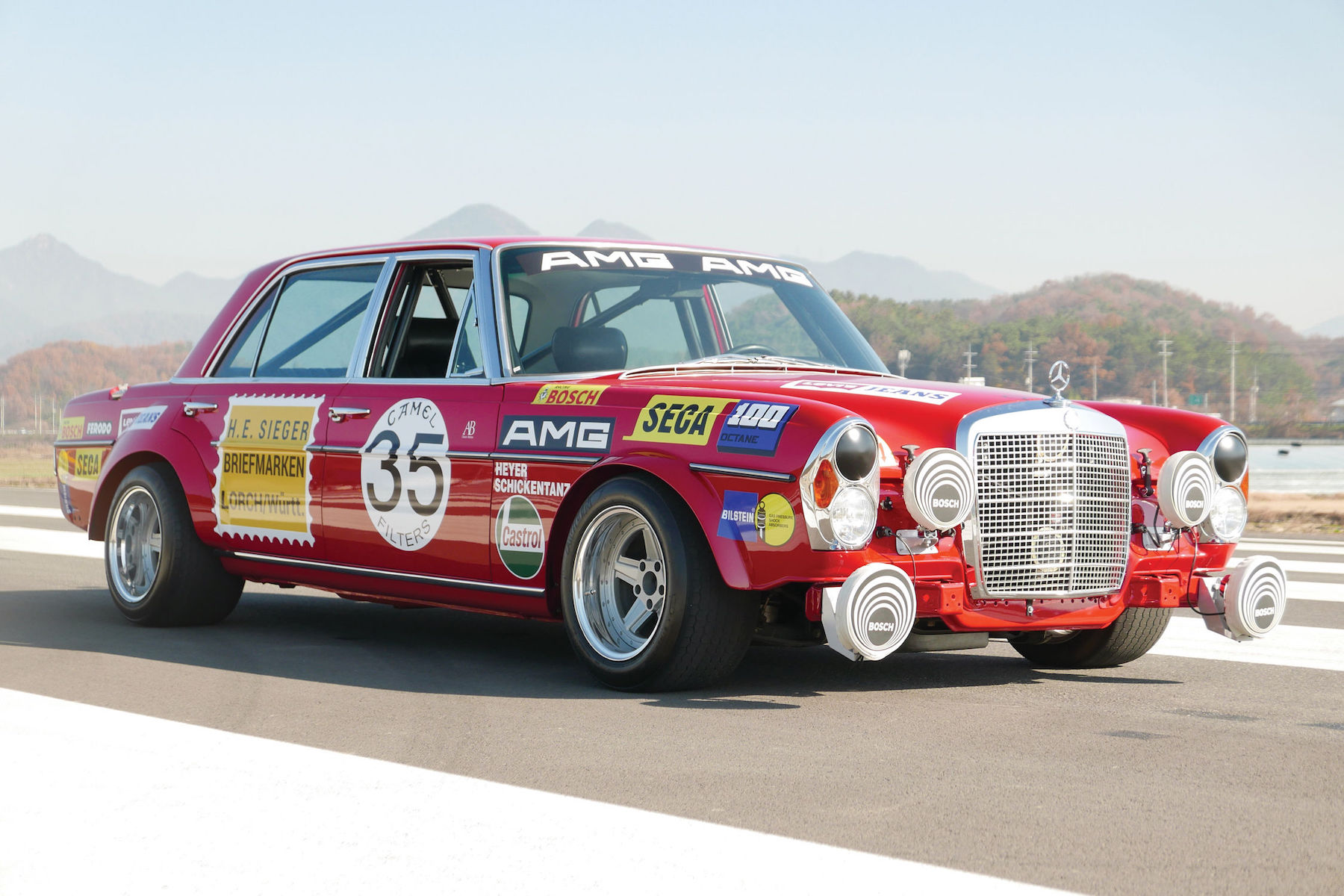 From then on the AMG brand was gaining popularity and eventually partnered with Mercedes as an exclusive Mercedes-licensed car modifier. By the early 1990s, Mercedes took over and since that time many performance-focused cars have come and gone. With a history in racing, the Mercedes-AMG branch is responsible for some of the more recent racing endeavours, including the unparalleled success in the hybrid Formula 1 era starting in 2014. Just a year earlier, IWC was announced as the official engineering partner for Mercedes-AMG in Formula 1, but the relationship goes back further than that.

This new IWC Pilot’s Watch Chronograph Edition “AMG” is not the first flirt between the two brands, as there have been many performance-oriented watches dedicated to the world of cars and motorsports. Ever since the two brands have started working together in 2004, most noticeable with IWC being the official timing partner for the Mercedes-AMG Formula 1 team, a number of special watches have been released. 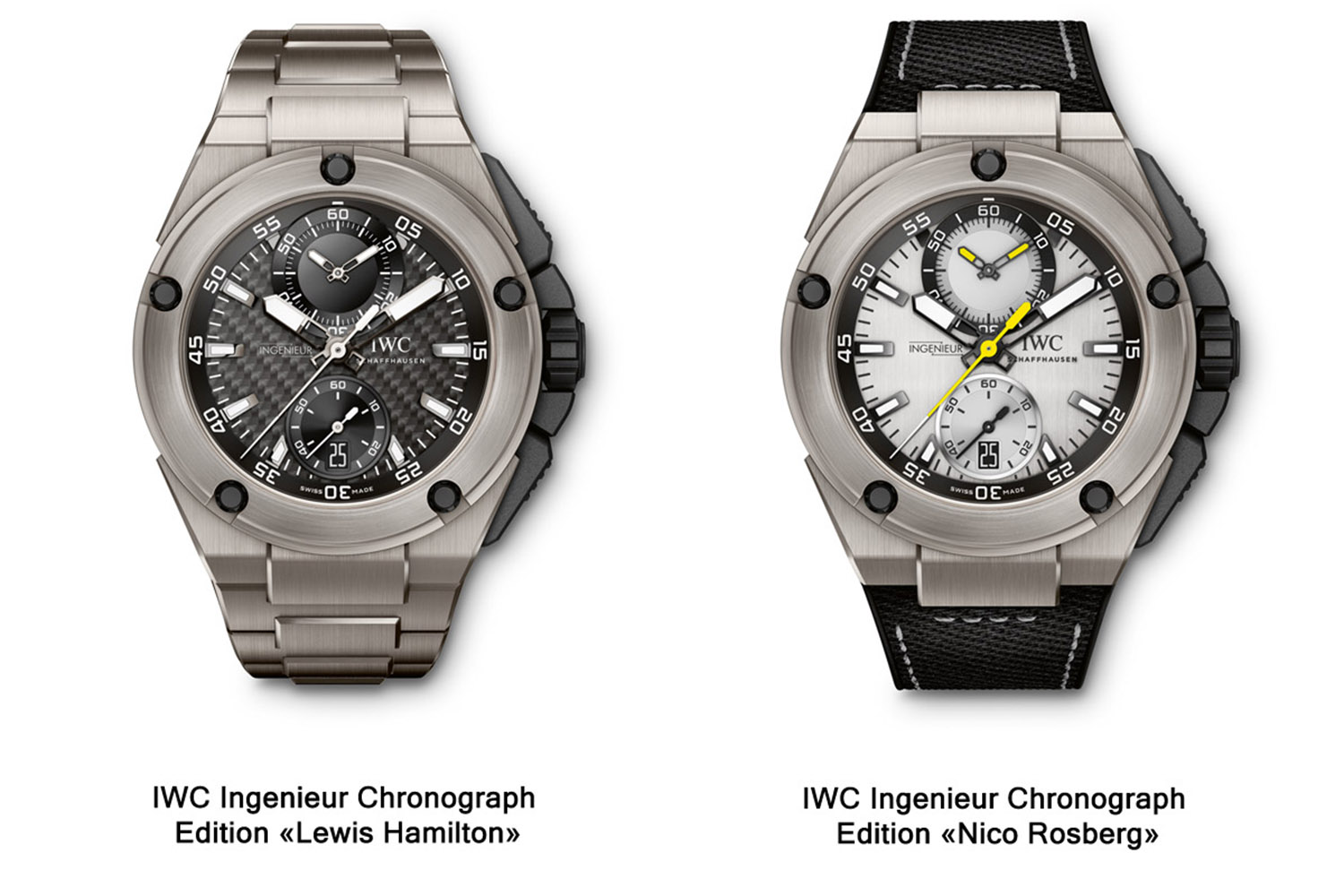 Back in 2014, we saw two limited editions of the IWC Ingenieur Chronograph designed by both Lewis Hamilton and Nico Rosberg who drove for Mercedes-AMG Formula 1 at the time (Lewis still does of course). These tactile, sports-oriented watches featured a titanium case with a zirconium oxide crown and pushers. Lewis chose a carbon fibre dial and a titanium bracelet and Nico selected a textile strap with a silver-plated dial and yellow hands.

Two years later we covered another IWC Ingenieur Chronograph, this time dedicated to the legendary “Silberpfeil” race cars by the German manufacturer. The “Silberpfeil” designation comes from the era where Grand Prix cars (not Formula 1 cars, that came later) were painted according to their national colours. Germany had white as its national racing colour and legend has it that under scrutineering for a race in 1934, a Mercedes W25 Grand Prix car was slightly overweight and ruled illegal. 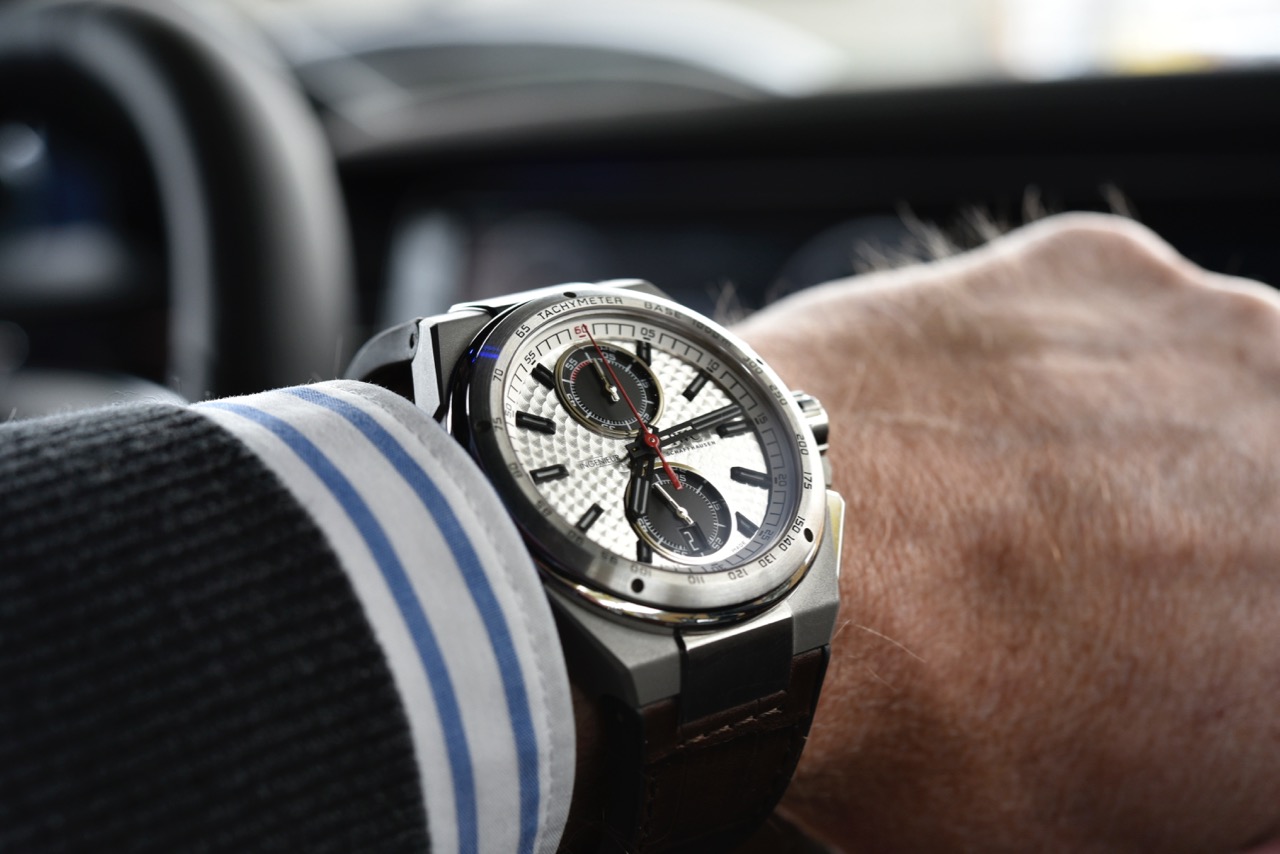 The decision to strip the car of its white coat of paint and down to bare metal saved the day, narrowly coming within the designated weight limit. An announcer for the race coined the term “Silver Arrows” (Silberpfeil) and the name stuck, with Mercedes almost exclusively fielding a silver car when racing. Even modern race cars like the West-McLaren-Mercedes F1 cars from the late 1990’s and early 2000s got the nickname “Silver Arrows”. The special IWC Ingenieur Chronograph “Silberpfeil” was dedicated to that fascinating bit of history.

Fast forward to 2019 we’ve seen a pair of IWC Big Pilot’s watches inspired by the then Formula 1 title sponsor Petronas for the racing team. An IWC Big Pilot Chronograph and Perpetual Calendar were decorated with a distinct emerald-green tone. This was actually the first time the Big Pilot collection, not only dedicated to airborne pilots in the eyes of IWC, was selected as the platform for a Mercedes-AMG Formula 1 collaboration piece.

We’ve also had the chance to talk to both of the current racing drivers for Mercedes-AMG Formula 1, Lewis Hamilton and Valtteri Bottas. During those interviews, we learned what makes them tick, and what watches mean for both men. Of course, we also talked about cars, wouldn’t want to leave that out of the equation if we chat with F1 drivers of course.

With over 15 years shared history, and 8 years of being the official engineering partner in Formula 1, IWC has now launched its latest collaboration piece; the IWC Pilot’s Watch Chronograph Edition “AMG” IW377903. It will come as no surprise that this watch is dedicated to motorsports yet again. 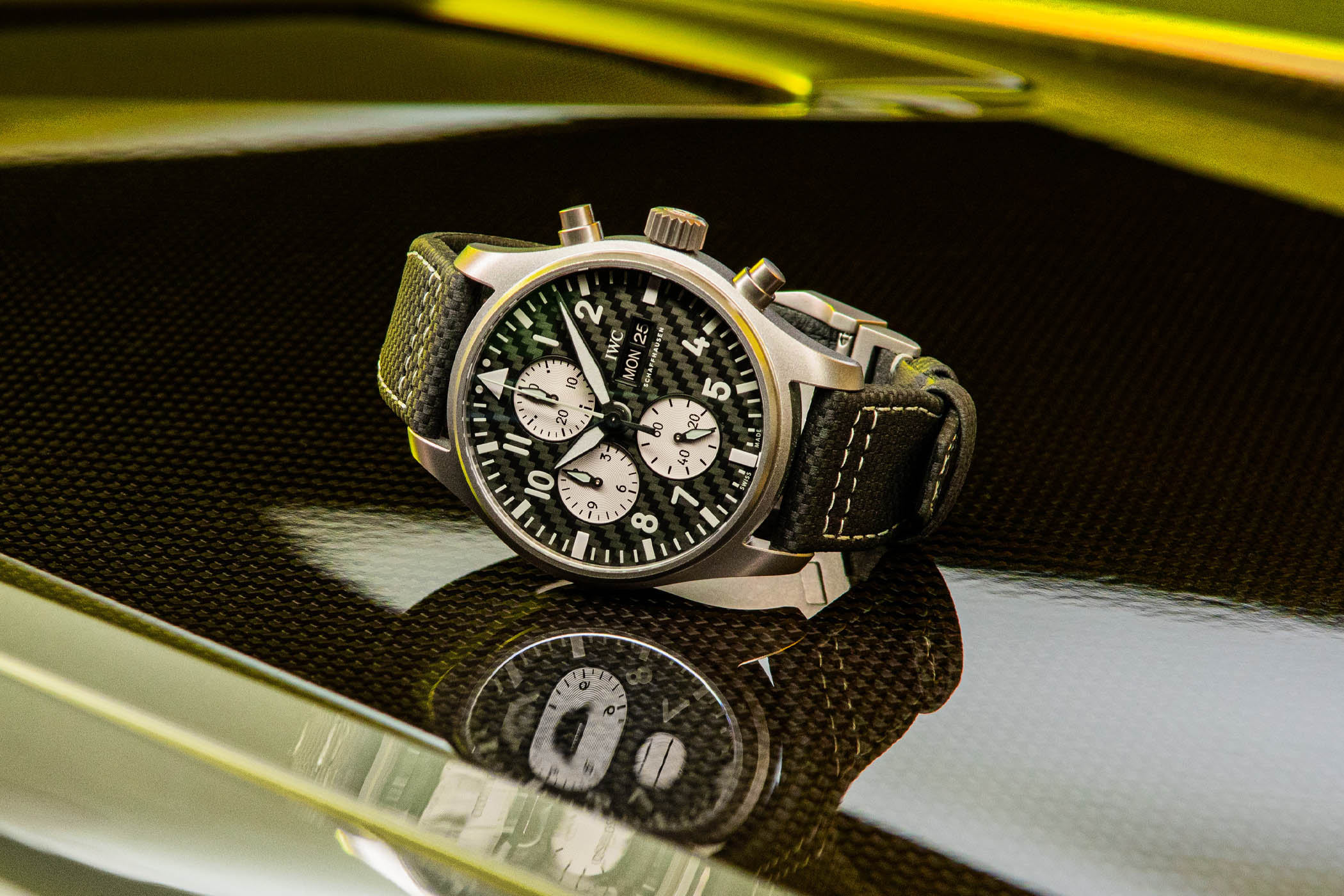 IWC chose to use the 43mm wide Pilot’s Watch model as a platform for this special edition. With a case, crown and pushers made in grade 5 titanium in IWC’s typical architecture, it will be a lightweight piece yet with a big wrist presence. It is actually the first time titanium has been used as the material of the case in the 43mm wide IW3777 series of watches. The matte grey case is reminiscent of AMG’s signature “Selenite Grey Magno” paint finish. 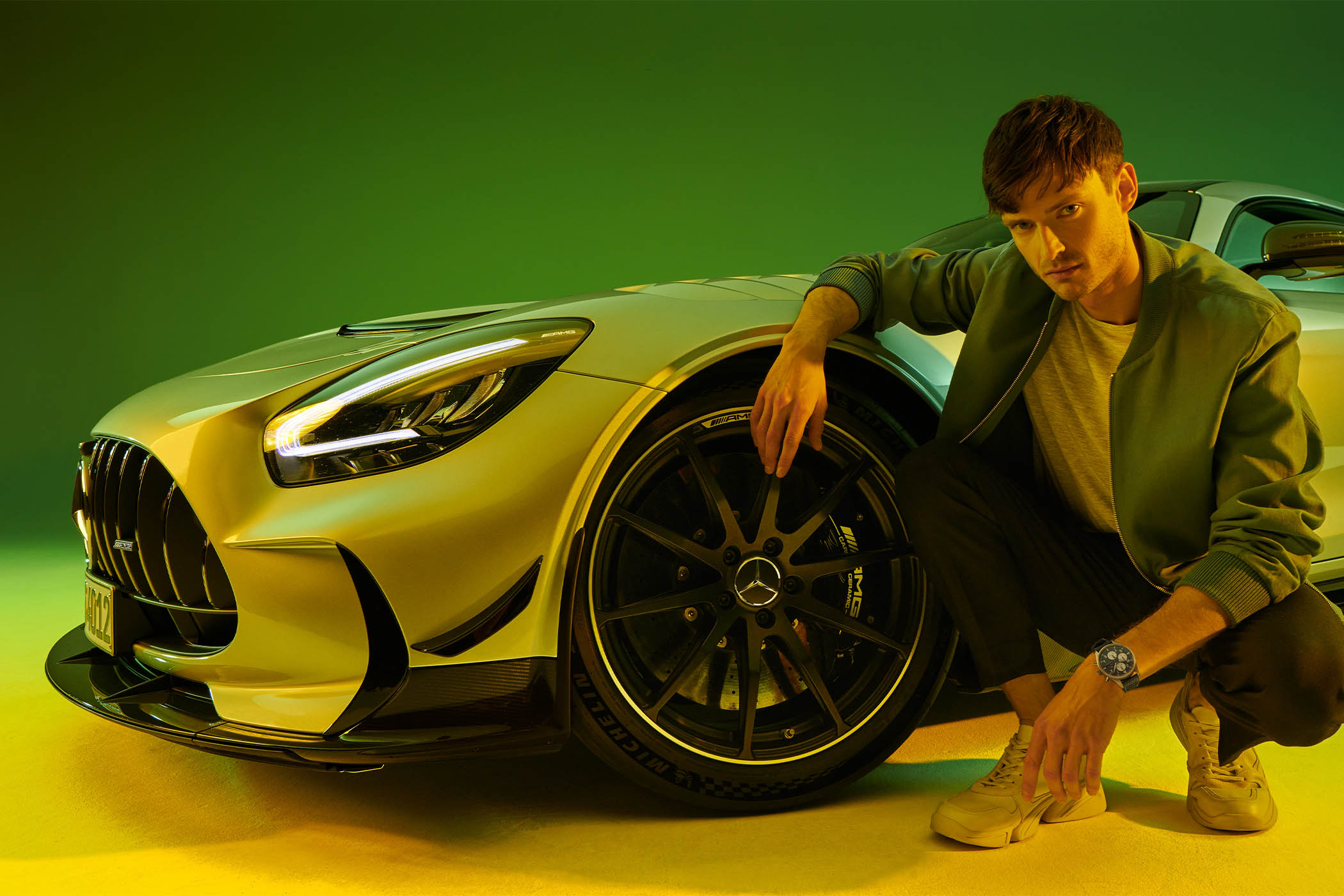 The dial for the watch is made of carbon fibre, the material found on pretty much all current AMG branded cars. It is contrasted by a trio of silver chronograph counters at 6, 9 and 12 o’clock. Being a true Pilot’s Watch by design, it features a minute track on the perimeter of the dial with the characteristic triangle to easily figure out which way is up. A pair of black hands with Super LumiNova coating indicates the central time, with a running seconds indication in the bottom sub-dial. The chronograph timing is displayed through a 30-minute and 12-hour counter with similarly styled hands, and a central chronograph seconds hand. 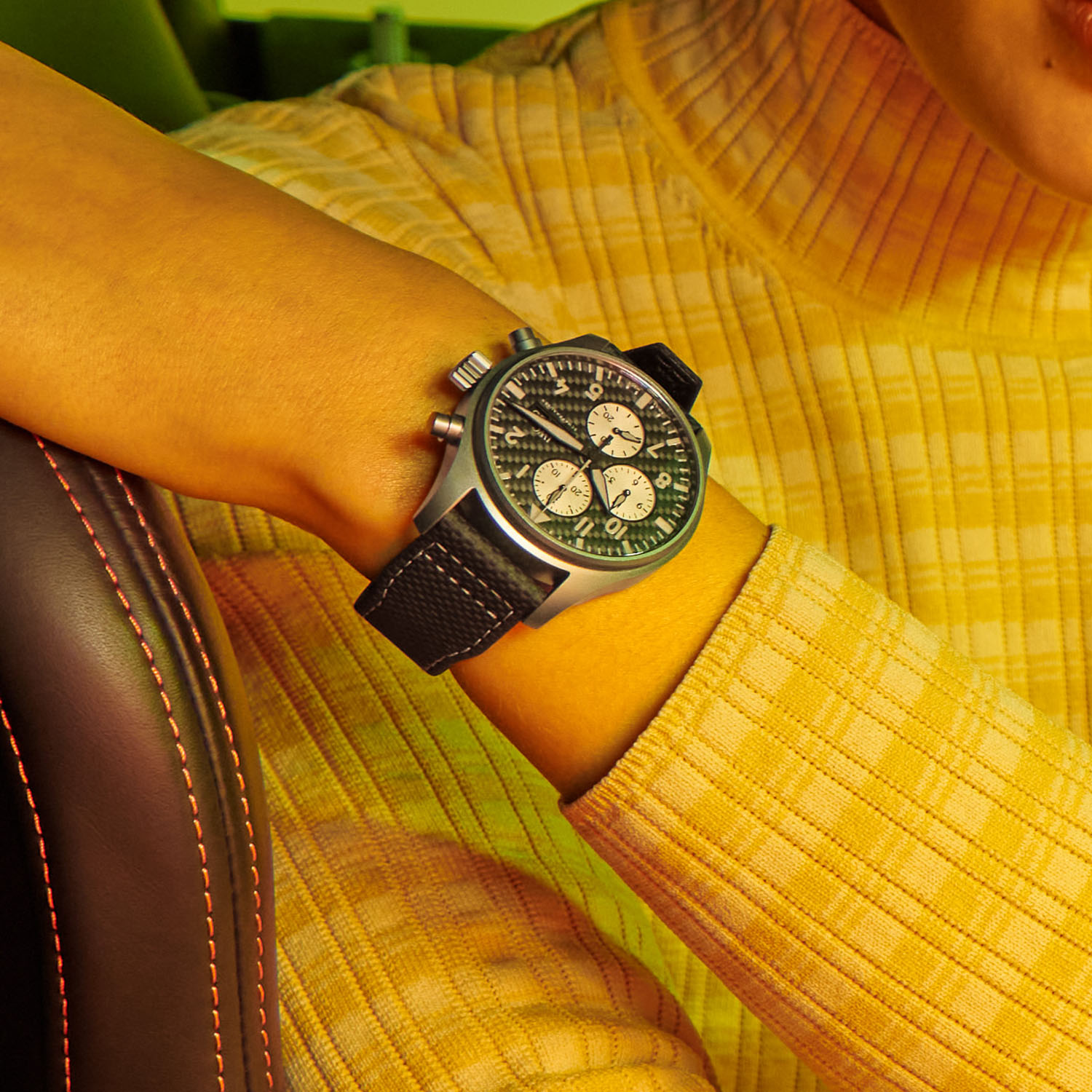 The movement inside is the IWC 69385 calibre also present in the recently introduced Pilot’s Watch Chronograph 41. This automatic chronograph has a few important updates compared to previous automatic chronographs used by IWC. It has a bi-directional pawl winding system and a column wheel. The frequency is 28,800vph (4Hz) and it has a 46-hour power reserve when fully wound. It also displays the day and date through a double aperture at 3 o’clock. The movement is made up out of 231 components and visible through the tinted sapphire crystal caseback decorated with the AMG logo.

The watch comes on a black calf leather strap with contrasting stitching in white and a matte stainless steel folding clasp. It is a non-limited Special Edition with a price of EUR 10,000. For more details and orders, please visit iwc.com.