Let’s start this article with a promise. This will be the most incredible article you’ll read today. Guaranteed. We can’t guarantee you’ll be satisfied with your 9-2-5-job anymore, though… A Vostok was what did it. The watch didn’t cost much, just a couple of Euros. And in case you don’t know what a Vostok is, don’t worry. The soon-to-be owner hadn’t heard of it either before he stumbled upon the watch on a flea-market somewhere in the outskirts of Georgia’s capital Tbilisi. 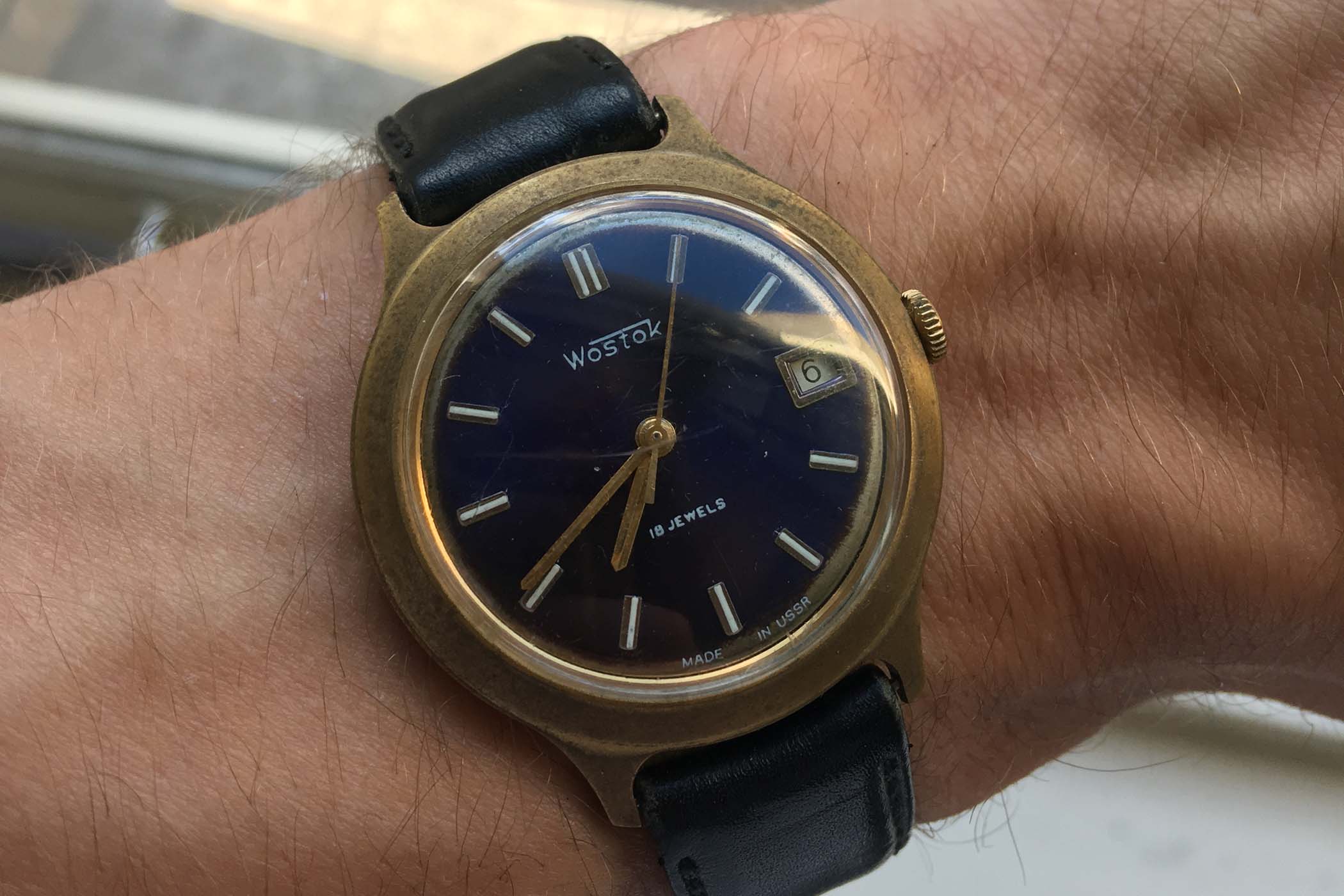 Laurens de Rijke saw the piece, bought it without knowing much about watches, and put it directly around his wrist. This was going to be his adventure watch, a USSR-made, three-hander that hadn’t even had the luxury of a stainless steel case. This one was made out of unpolished brass.

At that point, the adventurous Dutchman had driven approximately 3.900 kilometres on his Vespa, and he was about halfway to his final destination: Mongolia. “It wasn’t even a decent, normal Vespa”, De Rijke (31) adds quickly. “It was a special one, sort of museum piece. I had been restoring Vespas for a while and I thought it would a great idea to take this special one on my grand tour to Mongolia.” 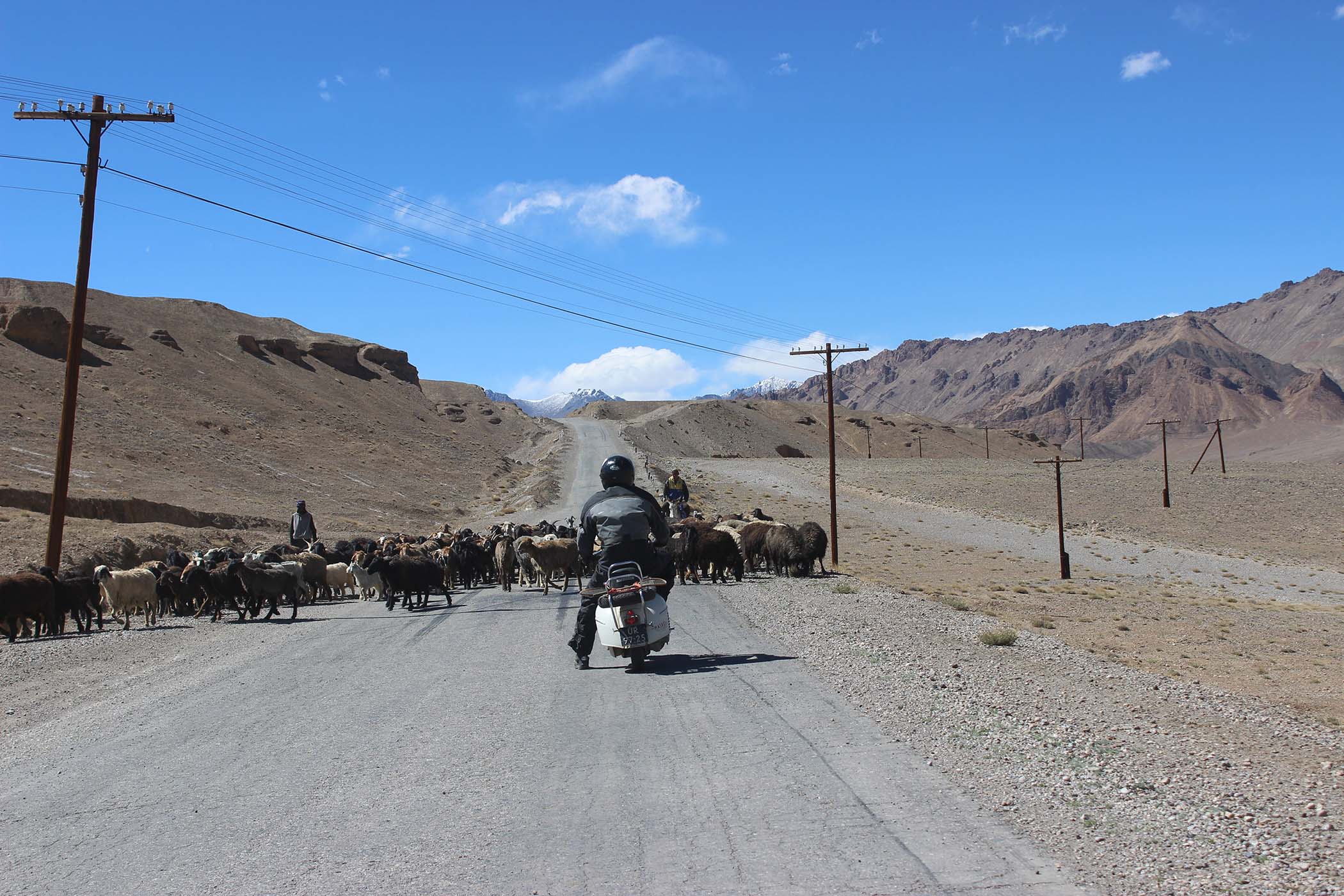 Turned out, it wasn’t. “Somewhere halfway Kyrgyzstan, it started to show irreparable damage. The frame was about to be ripped in two pieces,” De Rijke says. “I felt it was about time I retreated my ambitious goals. I didn’t have a rich sponsor to rely on so that Vespa was my actual capital. I didn’t want to end up with nothing, so I ended my journey there, somewhere in Kyrgyzstan.” 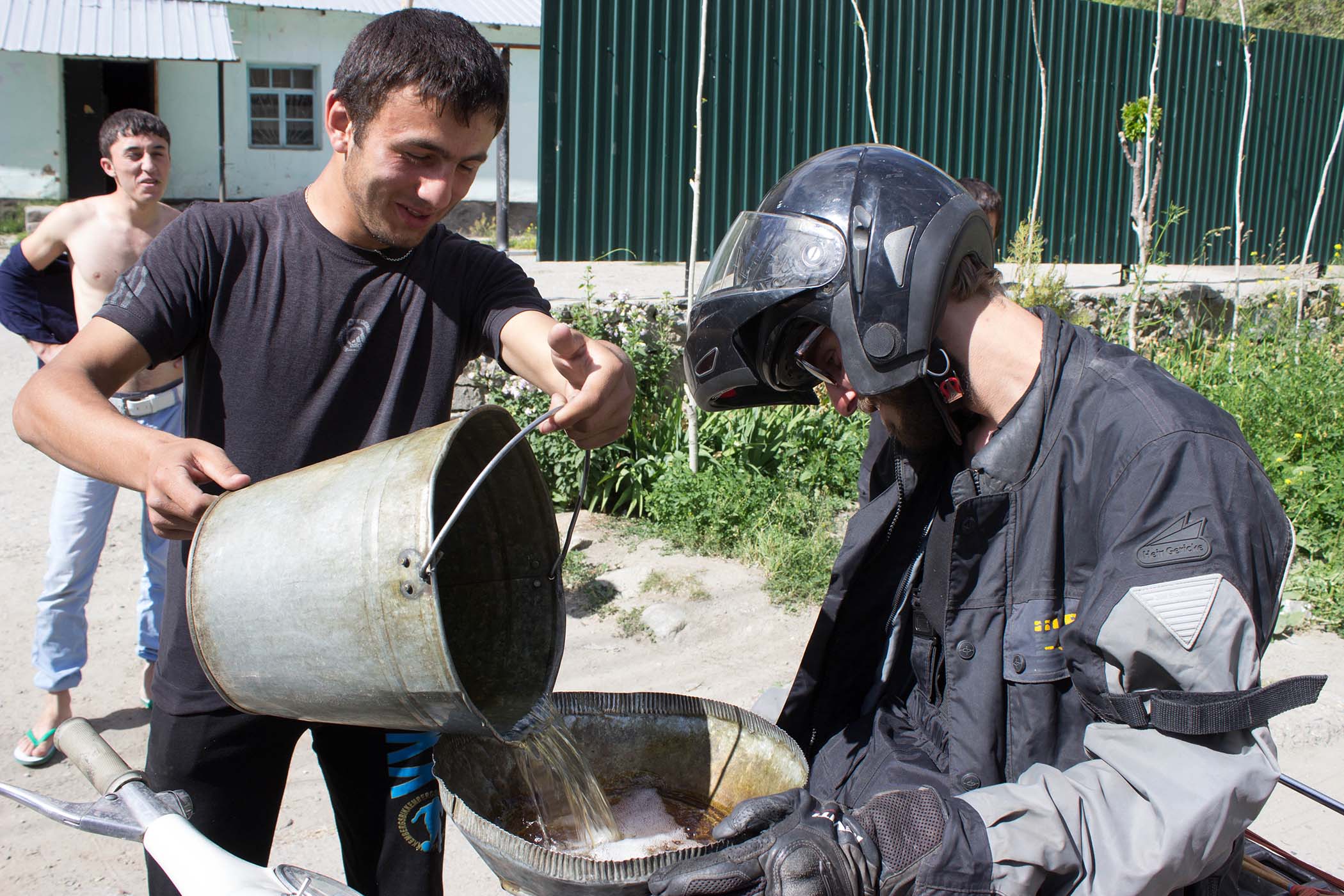 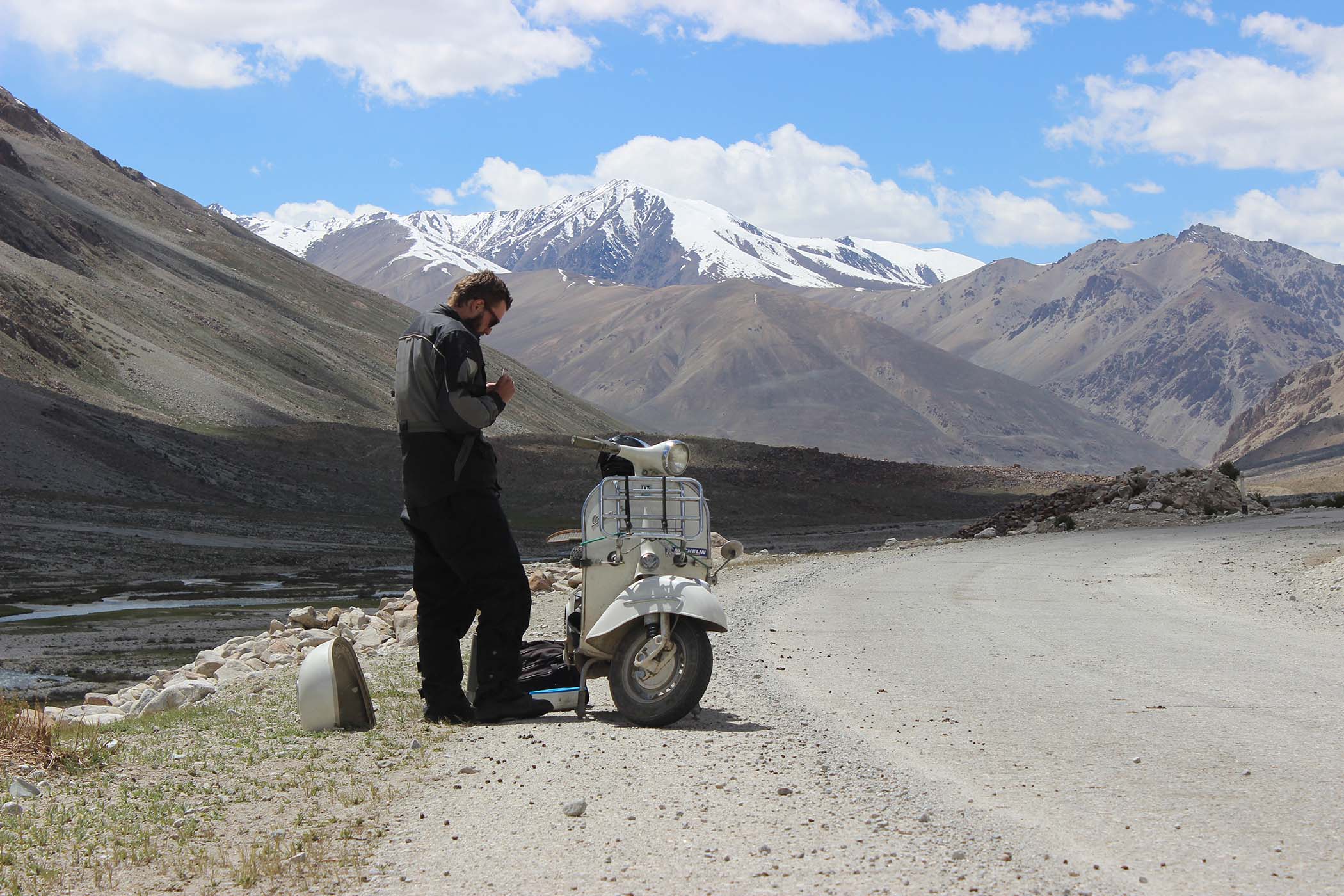 Tuning the Vespa in Tajikistan

But of course, this wasn’t the end at all. It actually started something new, something even less expected: a love for watches. Laurens, at that point studying industrial design at the famed technical university in Delft, had fallen in love with even more mechanical stuff: watches. Because of that weird Vostok. De Rijke decided to graduate by making a watch and eventually followed-up by the ambitious dream to start his own watch brand. 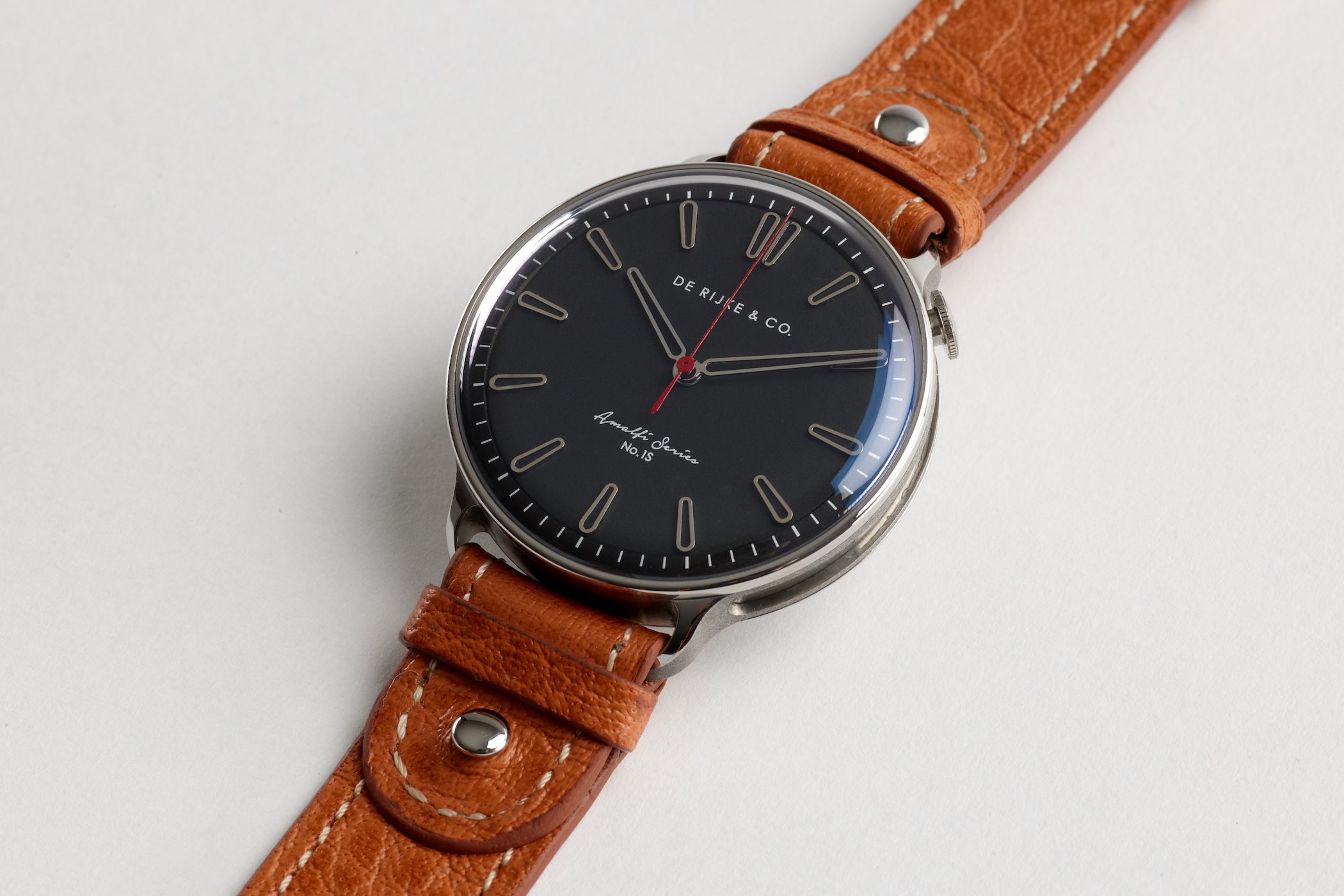 In the meantime, something completely different happened. One attentive English journalist had noticed De Rijke’s singular journey east, and had written an article in a motoring magazine. Of course, De Rijke read that magazine. And there he found an evenly weirdish adventurer from the Lowlands: Anton Gonnissen, a Belgian architect/entrepreneur with a very impressive rally CV (amongst others; Paris-Dakar rally three times on three different vehicles and he drove his prewar Bentley on different stages around the world). The two connected, as De Rijke recalls, in an unspoken way, “you know, the way people do when they separately decide to do crazy long journeys on vintage motorbikes.” Anton Gonnissen was preparing an even crazier trip: the Peking-to-Paris-rally on a tricycle from 1907. To be precise: a self-remade Contal Motori that some guy called Auguste Pons tried to drive from Peking to Paris in 1907, the year of the first rally. 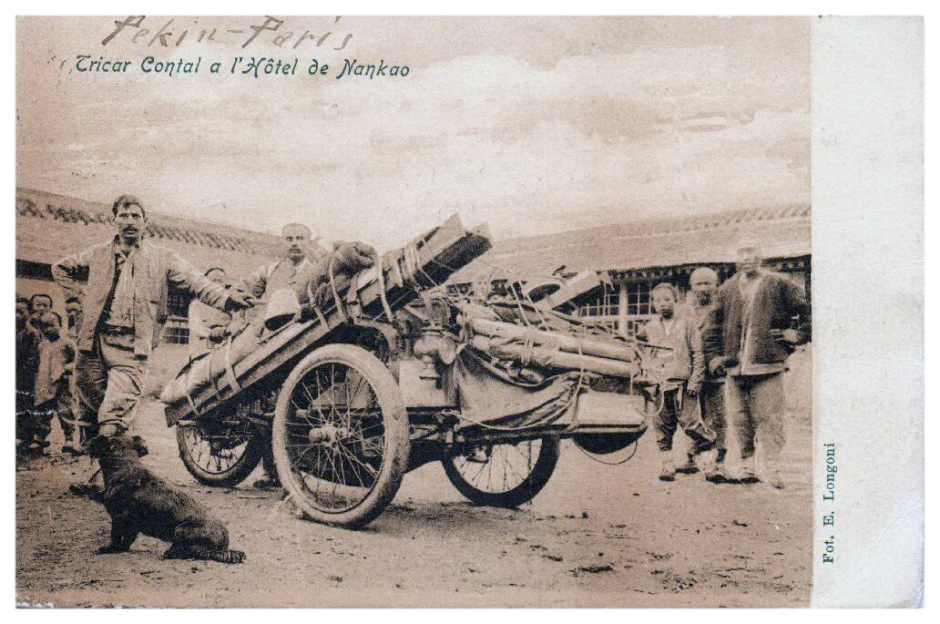 To put some things in perspective: in thirty days the competitors have to drive a distance of 13.694 kilometres. The first part of the route is through rural and offroad Mongolia and continues to be a monstrous exercise for any human being – so even more for a 58-year old on a motorcycle with barely any suspension. “You’re crazy,” the organizers told Gonnissen. “Yes, I am,” he responded. 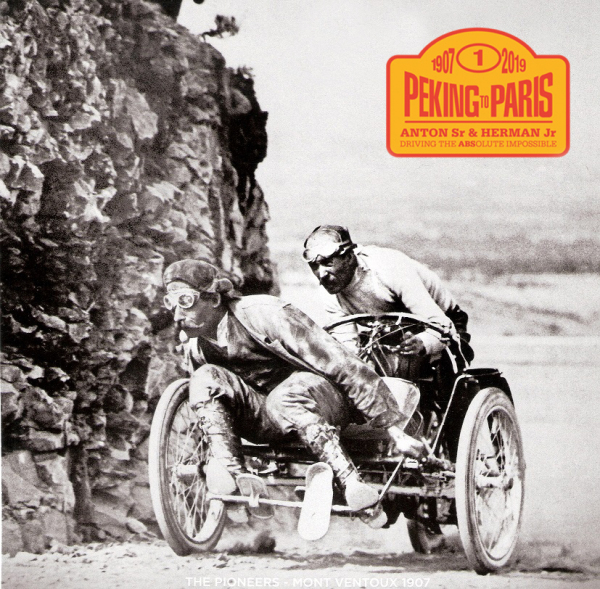 The greatest thing about De Rijke is his incredible eye for detail, aesthetics and mechanics while being very ambitious and very modest at the same time. He speaks in a quiet voice, and in very specific wording. He describes most watches from Switzerland as being designed “inside-out”, thereby referring to making the movement the most important part of the watch. His own watches are more design-oriented. He doesn’t make his own movements, instead uses the well-known Selitta and focussed practically all his energy to what he does best: make incredible designs that are very functional, elegant and somehow slightly Italy-in-the-fifties. If you see a Vespa in his designs or a Lancia Appia from 1955, you could be right. Although De Rijke insists, that’s not done on purpose. “I guess I just like that style,” he shrugs. “Still, I do think my designs are modern. It’s definitely not retro.” 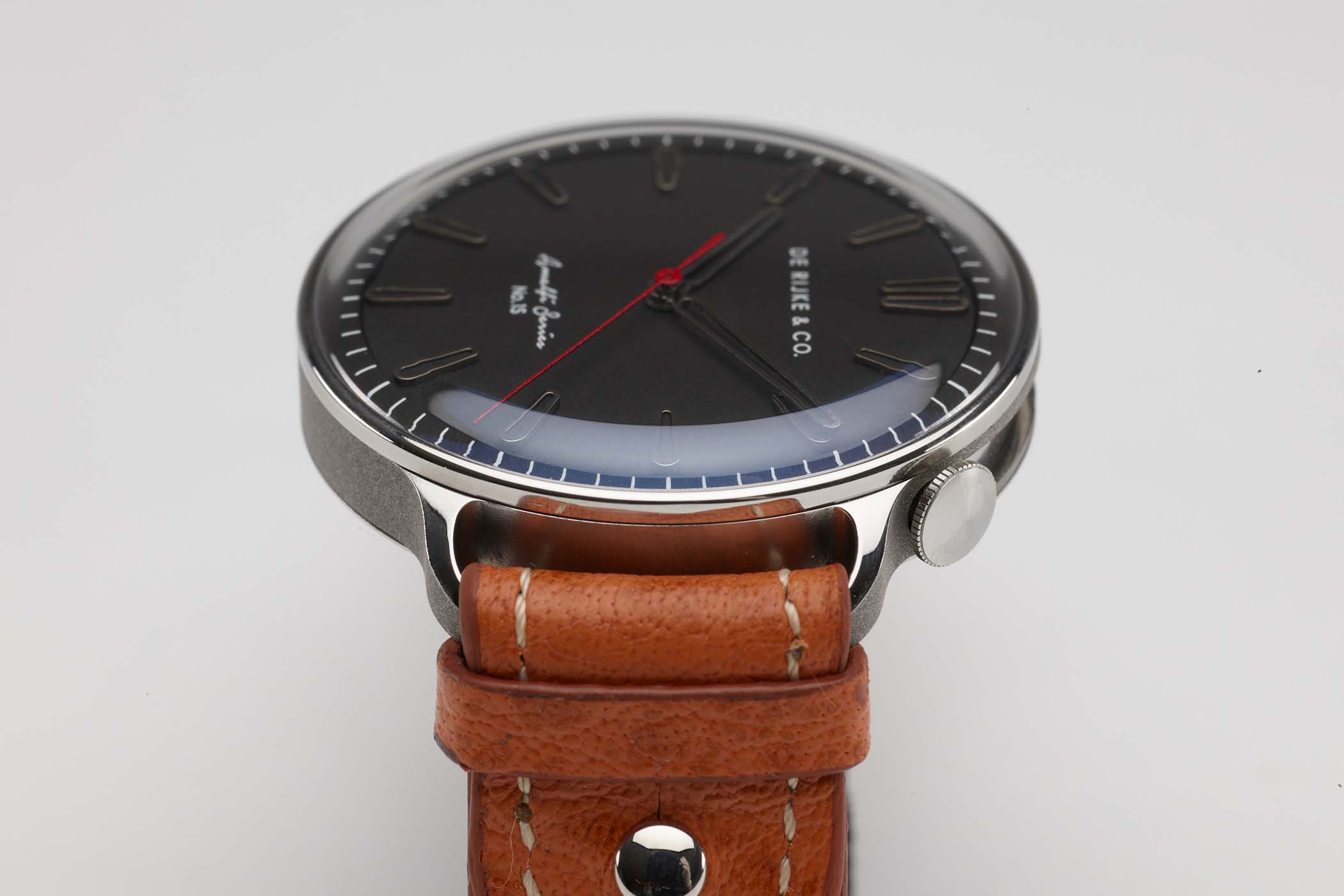 A very telling example of this keen eye for detail is the make of the case. To make the exact design he had in mind, De Rijke reached out to several case makers, until he finally found the quality he was aiming for. He started a collaboration with YUKI Precision, the precise machining company he knew from independent Japanese watchmaker Hajime Asaoka.

De Rijke, who spend numerous hours moulding and polishing in a workshop for his graduation work, knows what he’s talking about when he says: “they really deliver good quality. Better is not possible. And everything is precise as only Japanese can do it: including the test reports on the materials, the measurements, et cetera. At the moment, I only make the lugs myself, and they do the rest of the case. But in the near future, they will most probably do the entire case.”

Belgian entrepreneur and driver rally driver Gonnissen found himself struck by the passion De Rijke put in his products and decided to go with the crazy Dutchman as well. He listened to Laurens de Rijke, his Vespa-travels and his very new watch, and said: “sure, I’ll wear your watch. Great.”

And so he did. On that amazing voiturette, the three-wheeled Contal Motori from 1906. Or, more accurately, a slightly modernized replica of that original crazy tricycle. Gonnissen had his machine made by Belgian tricar specialists Rudy, Els and Joren Leblon from a tiny village in Flanders, Belgium. “’How the hell’ could one ask, ‘does a person, let alone a family, become tricar experts’?” asks Gonnissen on his wonderful blog. “The answer is simple. With a lot of enthusiasm and an innate talent to deal with engines and technology. The second most important characteristic is patience… A lot of patience. The universe of cars and voiturettes from around the turn of the century is small and large at the same time. The experts all know each other and the interaction is discreet and patient. Nothing is rushed.”

“Meticulous and ingenious, component by component was constructed, fitted and placed. Difficult solutions were devised in bed at night and implemented in the early morning. Rudy eats a banana at 10 AM, to continue working immediately afterwards. I have never met a family that is more focused than they are. They are special.”

The Mototri Contal P2P 002 was made in 16 months and as Gonnissen describes it, he got “home with a newly grown fascination for tricars, and a big heart. I got the latter for free, extra.”

Gonnissen didn’t do the journey alone. He brought with him an indispensable man, he calls “the rock” or “the Hemanator”, or “Herman the Brave”, or “Herman the courageous, ruler of the world’s roads and protector of the Front Seat”. His name: Herman Gelan, co-driver and navigator.

The journey Gonnissen and Gelan made, is as astonishing and as beautiful and as exciting as you can imagine. Of course, the bike broke down several times. The first time was already on the second day in China, when the front axis was bending and had to be reinforced. They repaired it the second time with pieces from an old truck. Along the way, the brakes jammed as well. The oil tank cracked, the exhaust “changed position”, oil had to be changed several times, a new chain had to be installed, new air filters, new tires… the list goes on and on.

The men themselves got a beating as well. The motor didn’t have any suspension other than the damper in the saddle and the leather chair in the front. Every bone in their bodies was trembling and shaking all the time. As Anton Gonnissen recalls from the beginning of the journey: “the question was not if we would get injured by the journey, the question was how bad the injuries would be.” Considering the seating position the men were most prone to back-, shoulder- and arm injuries. They worked together with the university of Ghent to make a frame-like suit that would support the arms and shoulders of the men. 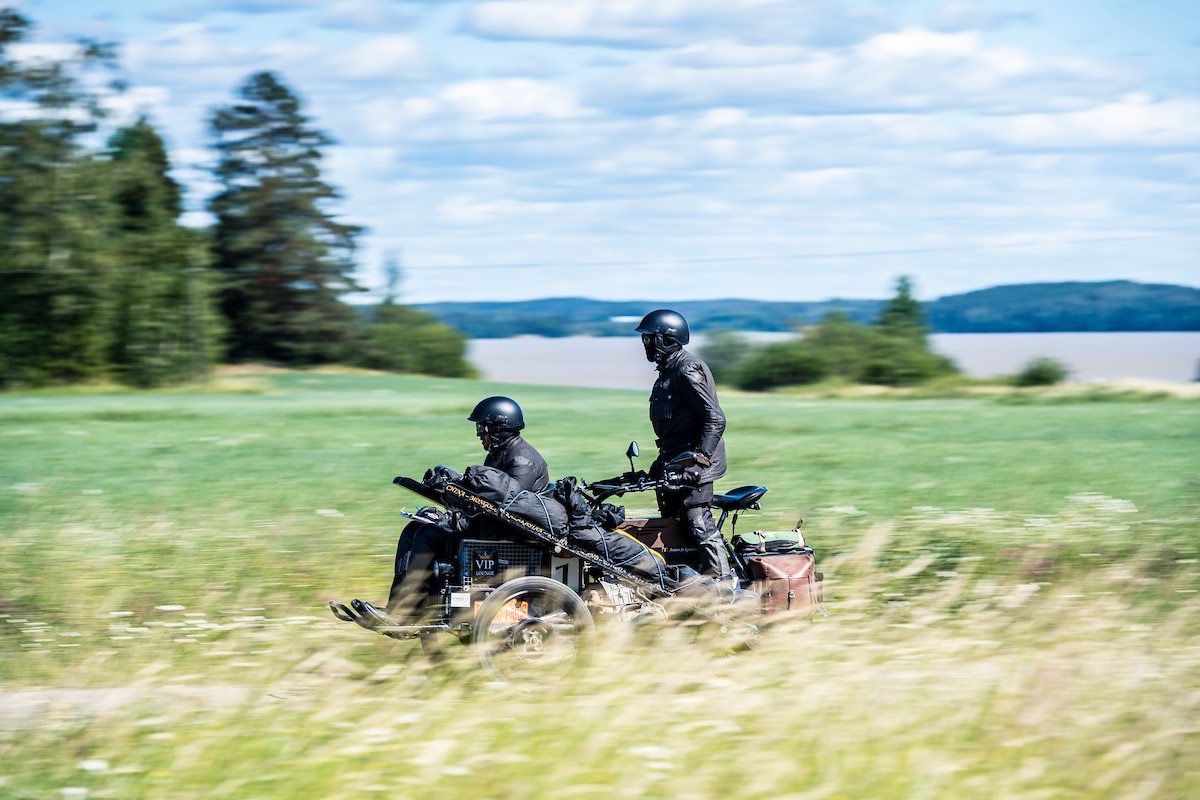 Anton Gonnissen really described it best on his blog, after a monstrous “special stage” that brought them eight hours of rain and mud. He writes: “Suffering is permanent, obscure and dark… and has the nature of infinity. But this one did end… with a cool beer.” By that time, by the way, the Contal was up for it’s fourth (!) version of the front axle, with steel triangular reinforcements that should do the job until Paris. That battering wasn’t really unexpected though, the stage before that one lasted for eight days straight with no rest, from Ulan Batoor in Mongolia to the Russian city that’s most commonly known for being the Capital of Nowhere.

Believe it or not, but during the entire journey Anton Gonnissen wore that beautiful watch, the De Rijke Amalfi strapped firmly over his jacket. It must’ve been sandblasted, trashed and trebled to milkshake during those 14k+ horrifying kilometers (yes, after arriving in Paris, Gonnissen decided to drive home to Belgium as well…).

Funny fact… Anton wore the watch on a strap that might look familiar to our regular readers. Check here our review of the Erika’s Original Strap and when one of her straps went got in ISS to orbit the Earth.

What did the watch look like after that journey? “I didn’t dare to ask…” says De Rijke. “Of course, I was very, very curious, but I figured he wasn’t really up to talking to me about that watch. Only one time De Rijke asked Gonnissen if he was wearing the watch and how it was performing. His answer was as cool as can be: “Yup, still going strong…”

When the watch finally got home, it was still working, and in one piece. Laurens de Rijke can’t hide his enthousiasm and happily eloaborates on this great moment. “My vision five years ago to create this watch was to have a watch that would serve as a memorial. The inspiration came from the Vostok that I bought in Tbilisi and that I still own up to this day and that reminds me of my most beautiful trip along the Old Silk Road.” “It feels good to see that I have achieved exactly that, this very Amalfi Series watch is now the best trophy for an astonishing achievement and journey. It is only that you really appreciate something when you have an emotional bond with it!”

De Rijke echoes words that Gonnissen also mentioned in his summary of the journey. Even on the most horrifying days, when Paris seemed (and actually was) endlessly far away, Gonnissen and his watch continued their journey. Strengthened by earlier defeats and driven by the motto that got them so far away in the first place. The words that were shining on the bike, even when it was covered in mud, the words that should inspire us all to discover new horizons. Some words to live by: “One Live, Live It… Absoluut”.