StartBloggers CornerThe new Panerai Luminor Due 38mm – That Small but That Good?

The new Panerai Luminor Due 38mm – That Small but That Good?

In the collective psyche of watch enthusiasts, Panerai is synonymous with large, robust, instrument dive watches. After all, that’s how the brand was conceived back in the 1930s. The brand wasn’t shy about making a 45mm watch its standard offer, and even to introduce 50mm pieces (or more). However, that was the 2000s and demand has changed. In 2016, Panerai introduced the Luminor Due, a range of smaller and thinner watches, with a hint of elegance. Today, downsizing goes a few steps further, with the introduction of the Panerai Luminor Due 38mm (and no, it isn’t advertised as a ladies’ watch). 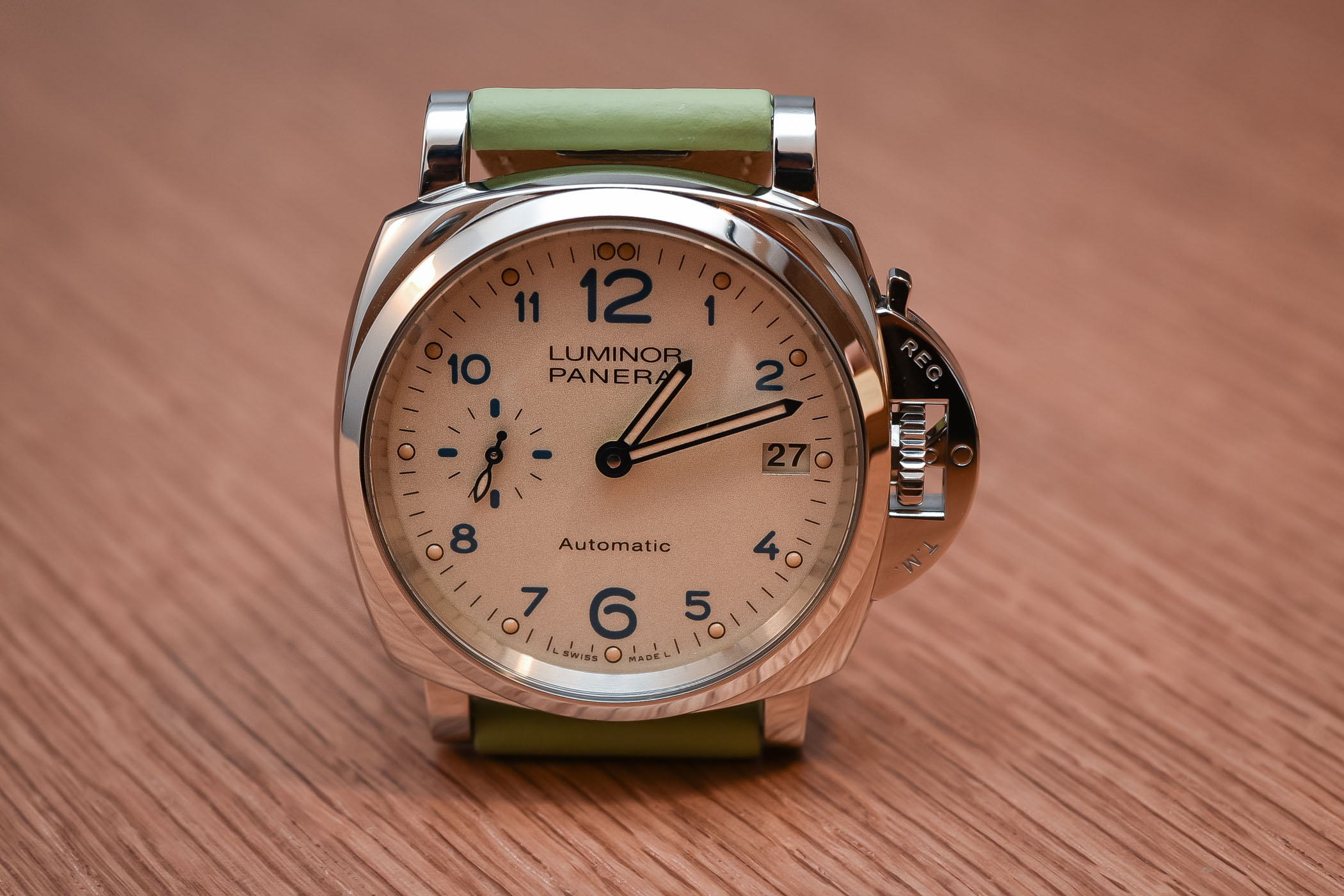 The SIHH 2018 collection brought several new watches in the Luminor Due collection. However, the main novelty concerns the introduction of a smaller diameter: 38mm. Yes, there are no typos, Panerai now offers watches under 40mm! And no, they aren’t, as such, made for ladies – even if, of course, some of our female readers will spot an opportunity to finally wear a Panerai. Because Panerai is first and foremost a brand for men, these new Panerai Luminor Due 3 Days Automatic Acciaio 38mm PAM00755 and PAM00903 are made first and foremost for them. 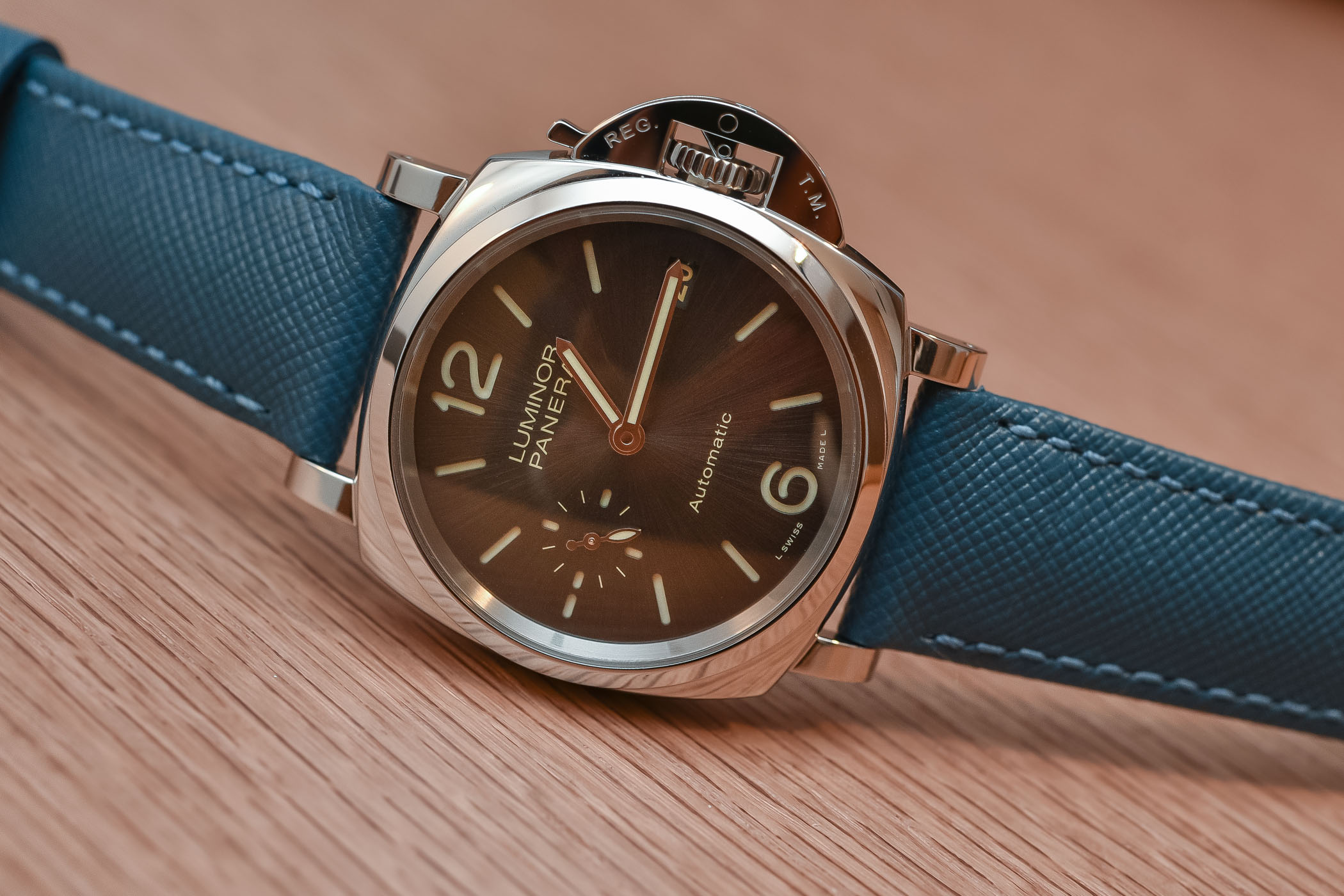 Now come the questions. Good? Not good? Appropriate? Heretic? Before we move to the description of these new Panerai Luminor Due 38mm, let me get a bit personal. I have always enjoyed the look of Panerai watches, their heritage, their robust look, their cushion-shaped cases, their sandwich dials, the “nude” dive watch concept behind these watches. Yet, I never enjoyed wearing them. A diameter of 44mm or more is just too large on my wrist – or I should have played the game of “voluntarily oversized”. When Panerai introduced the 42mm Luminor Due collection in 2016,  with their thinner cases, I should have been happy… but not entirely. To me, there was something wrong with the proportions – the diameter/height ratio was not the typical Panerai one anymore. So what about these new 38mm versions? 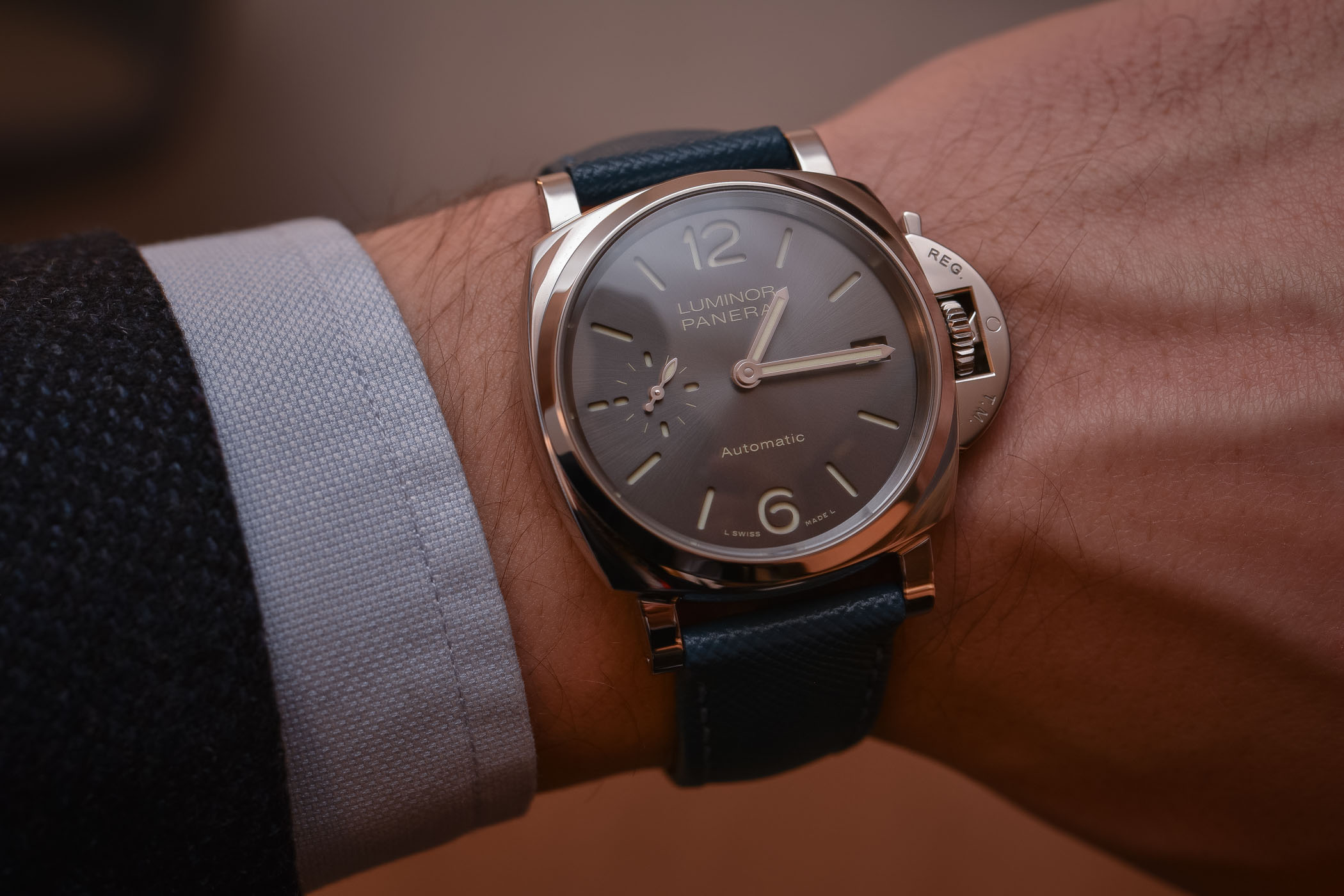 First of all, no surprises in terms of style, design or features. The new 38mm diameter means a reduction of all the elements, without touching the basics of the Luminor Due collection. The shape of the watch remains faithful to what we know and to Panerai’s signature style. The case is cushion-shaped, the lugs are straight and hollowed, the crown is protected by the trademark Luminor device. In short, it feels familiar. Those who already liked the Luminor will like this iteration, those who disliked it won’t drastically change their minds.

The new diameter of 38mm entirely alters the perception of the Panerai Luminor Due on the wrist… and it’s not just about the area covered by the watch. Of course, this results in a watch that finally sits on the wrist and not over the wrist. In addition to that, the smaller diameter also implies different proportions, as the diameter/height (38mm x 11.2mm) ratio is back to something a bit bulkier, which is “more Panerai” to me. Don’t forget that 38mm is still, after all, a masculine diameter… 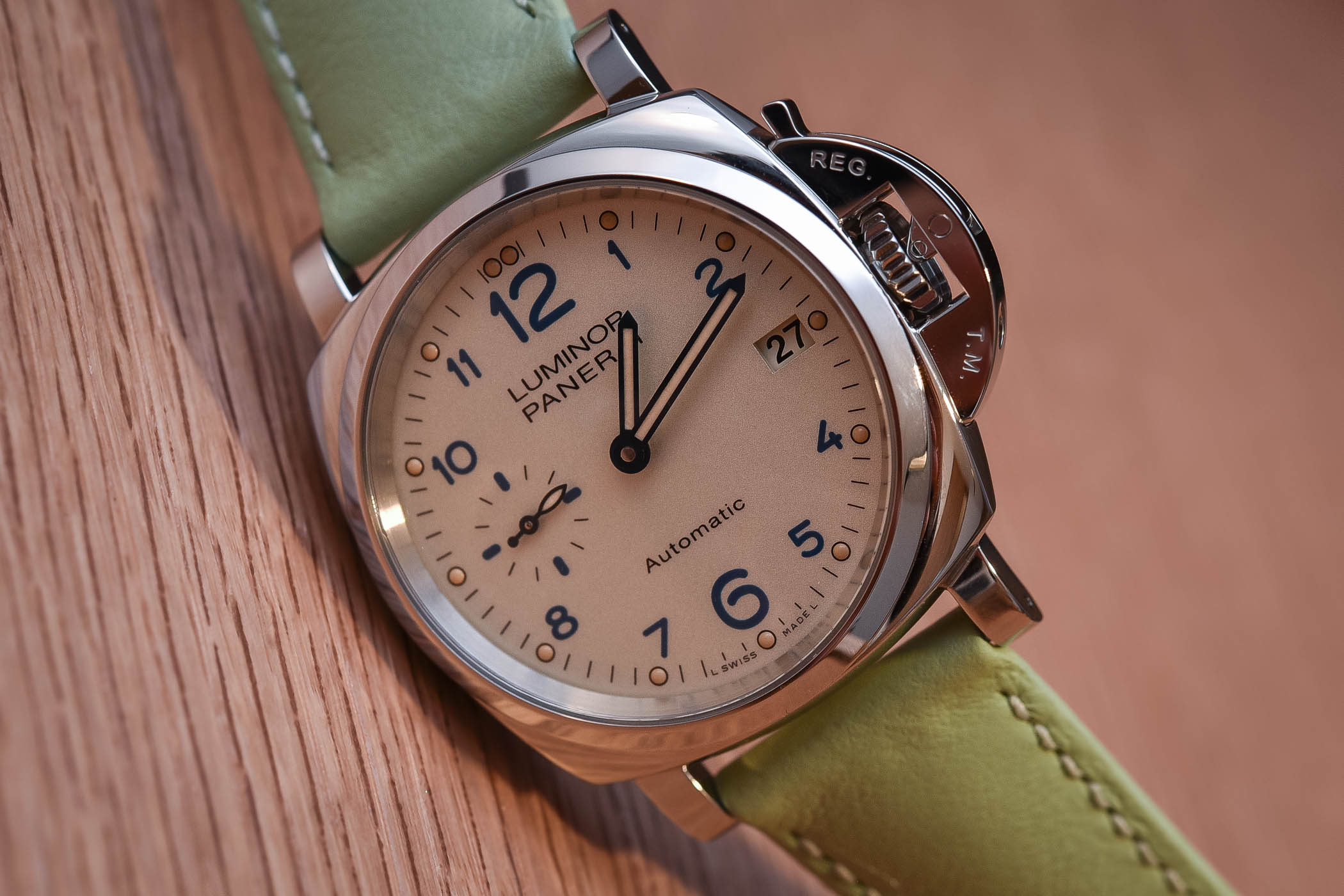 The new Panerai Luminor Due 3 Days Automatic Acciaio 38mm is available in two versions: PAM00755 with an anthracite sandwich dial and PAM00903 with an ivory dial. Both feature hallmark Panerai style, one with the iconic sandwich dial and baton indexes, the other with Arabic numerals and dots. Hands, inscriptions, displays are all in line with previous watches done by the brand, so no surprises here. A good point with these smaller diameters is that for once, the date window is placed right where it should be, meaning on the edge of the dial. 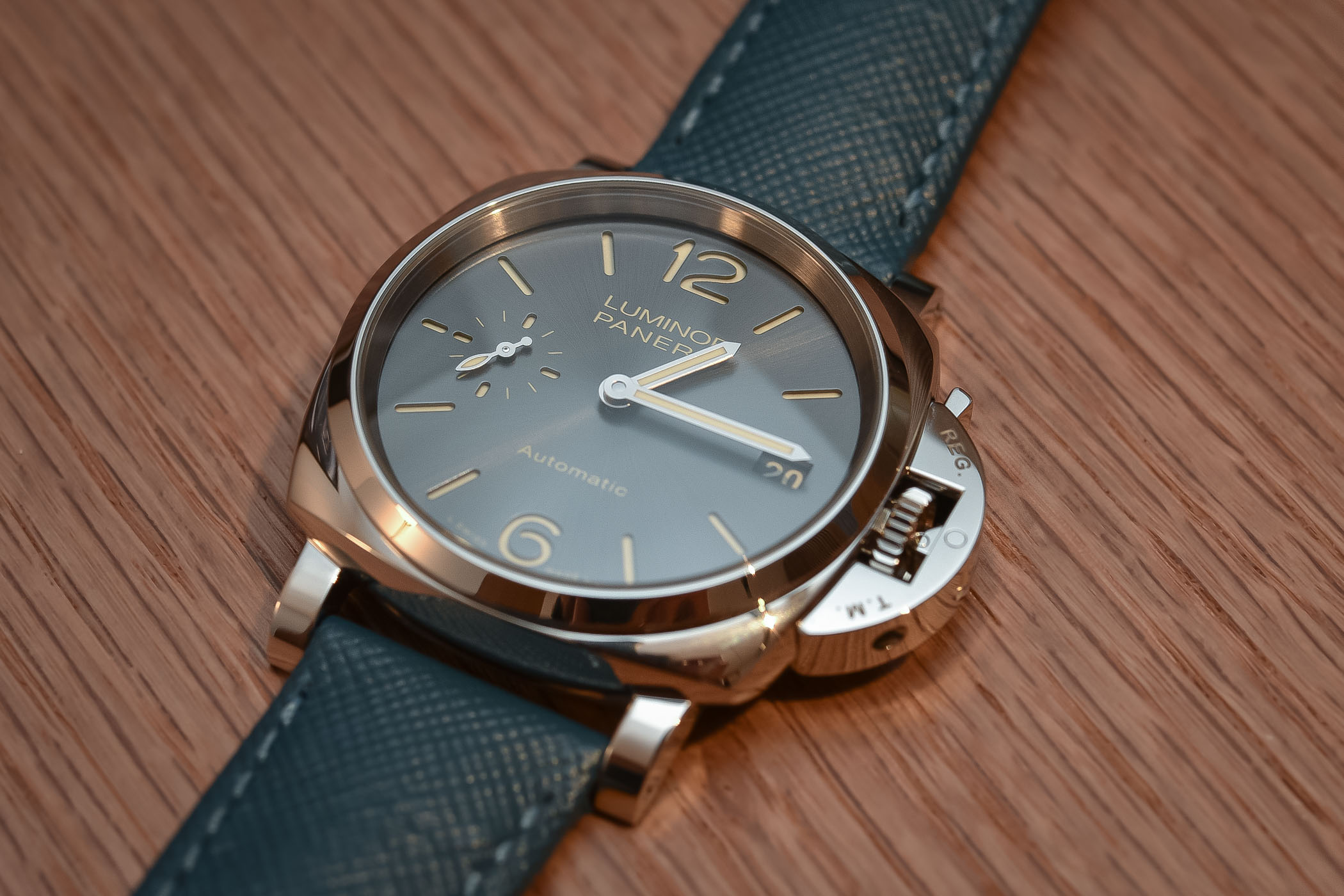 Inside the case of the Panerai Luminor Due 3 Days Automatic Acciaio 38mm is a new movement, named calibre OP XXXIV. Although it is specific to Panerai, it isn’t an in-house movement. As part of the Richemont Group, Panerai can benefit from the ValFleurier facilities to have movements developed. It is what is called a “group manufacture movement”, yet it has been updated to meet with Panerai standards: small seconds at 9 o’clock and a sturdy 3-day power reserve. The calibre OP XXXIV is automatic and beats at a 4Hz frequency. It remains hidden behind a closed case back. It features a silicon escape wheel and a pallet fork for anti-magnetic properties. This movement is probably using the same technical base as the new Baume & Mercier Clifton Baumatic. 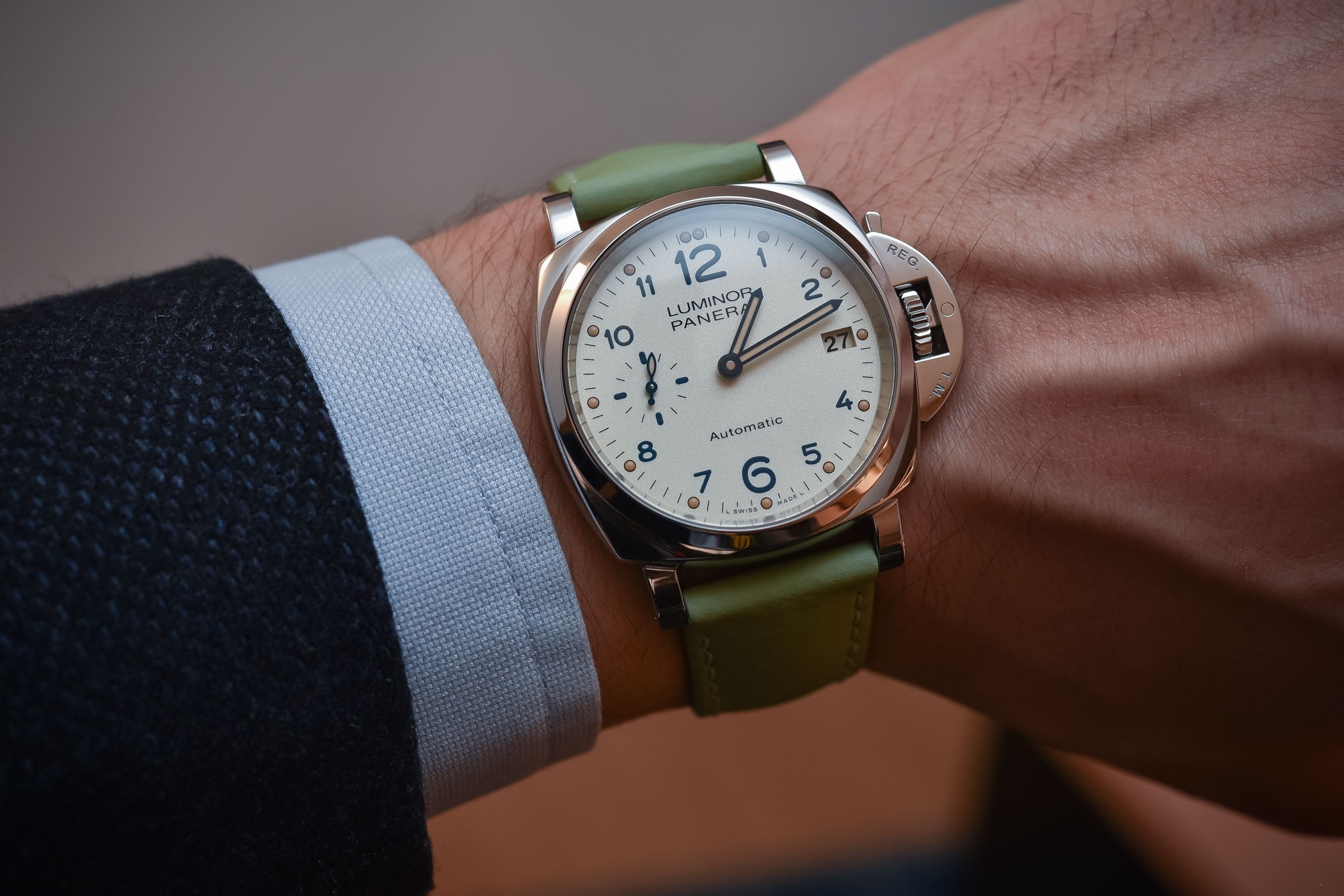 The Panerai Luminor Due 38mm is presented on leather straps with a fast-changing system – something that is growing in the industry. Even if the brand doesn’t advertise these watches as men’s or ladies’ watches, they’ve been presented to us on short straps – but then again, exchanging a short strap for a longer one shouldn’t be a problem.

Overall, the new 38mm Due are pleasant and bring the right proportions to the wrist without degrading the iconic style of the brand. One complaint though, which applies to all the Luminor Due watches: the 30-metre water resistance threshold is simply not sufficient enough to match the prestige of the name printed on the dial and the fact that the watches are equipped with the Luminor crown protecting device… Really, Panerai has to improve this and should offer a solid water-resistance of 100 metres as standard fare on all its watches. 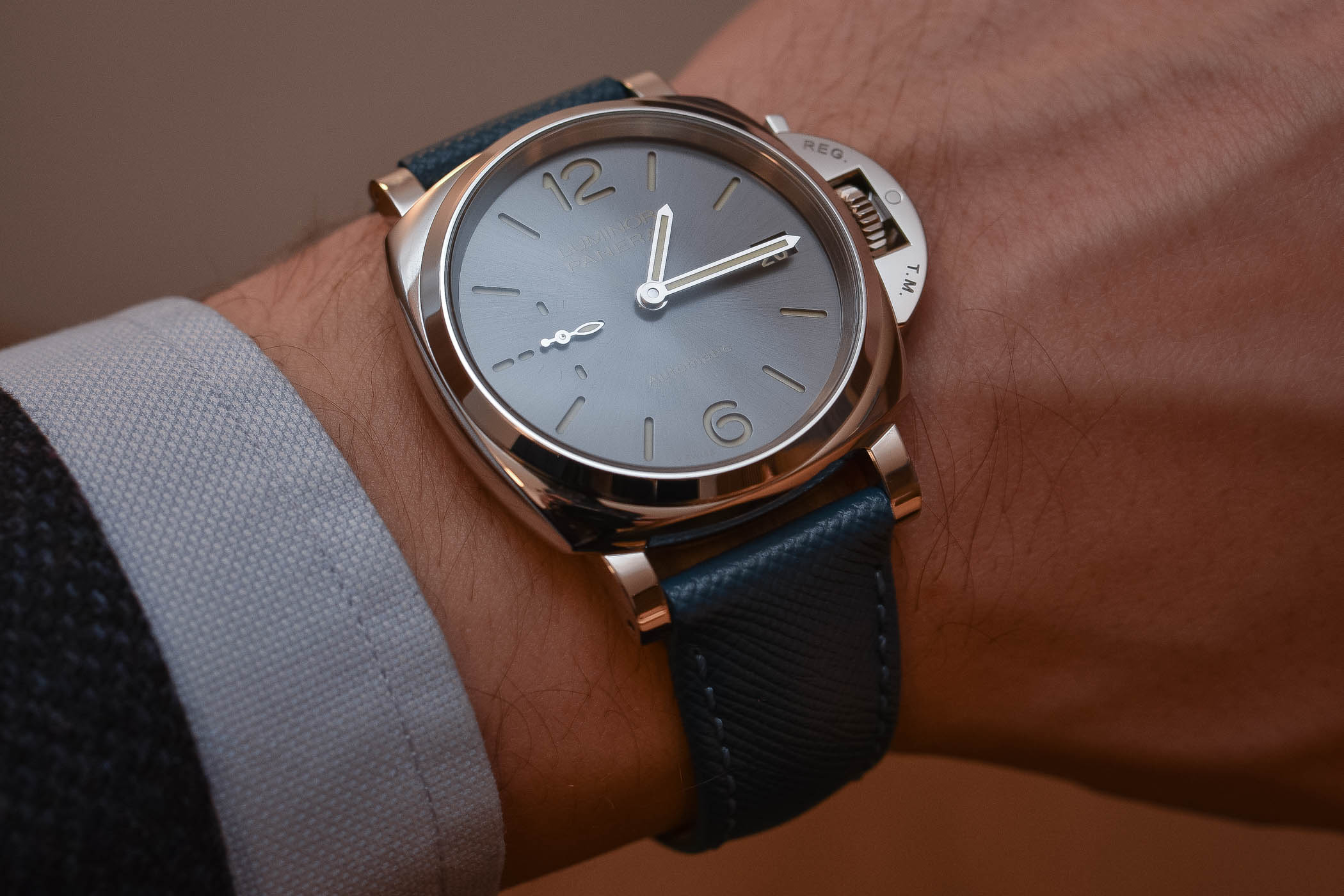 These two stainless versions of the 38mm Luminor Due, ref. PAM00755 and ref. PAM00903 will be priced as entry-level options, at EUR 5,900. Other versions in gold will also be available. More details on panerai.com.