Prior to the SIHH 2018, back in December, IWC introduced a series of 4 watches, including one very surprising watch. A stand-alone piece, not included in any of the existing collections, the IWC Tribute to Pallweber is a watch specifically created for the 150th Anniversary of the Schaffhausen-based brand. This re-edition of one of the greatest pocket-watches IWC ever made is now available in steel, still with the same digital hours and minute display.

The Tribute to Pallweber is a completely original watch, a vintage reedition, not of a famed 1960s piece but based on one of the most iconic pocket-watches ever manufactured by IWC, the Pallweber. This 1884 piece showed a fascinating display based on a digital indication of both the hours and minutes – a first back then. Developed in 1884 and based on the Pallweber system developed by a Salzburg-based watchmaker, Josef Pallweber, it showed the hours and minutes with large numerals on rotating discs. 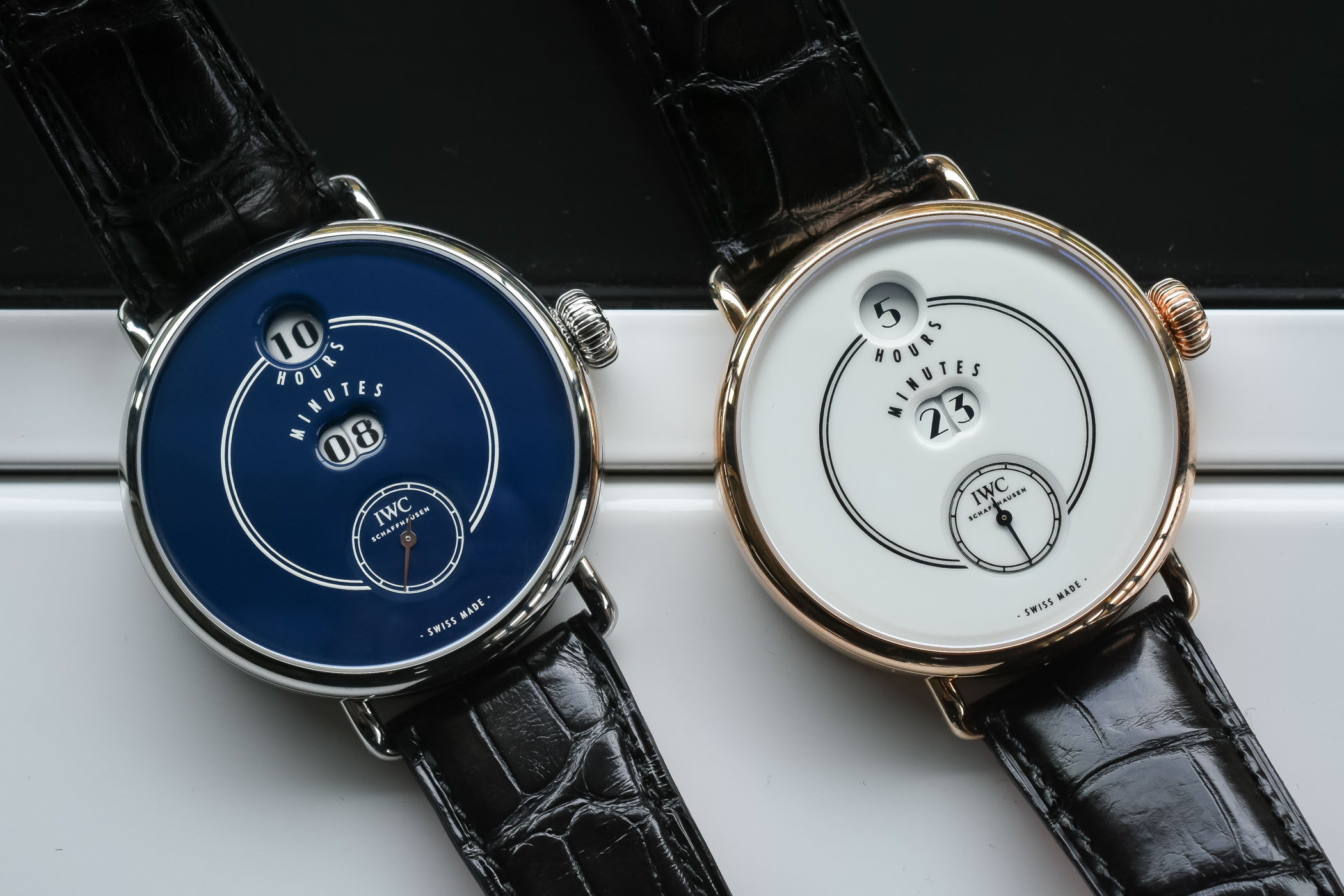 Although this modern re-edition is now a wristwatch, it still sticks to the exact same display used on the famed pocket watch created by Josef Pallweber. It is a watch that is truly original, as it’s not part of any current collection and uses its own design codes. For instance, the large case (45mm diameter, as is often with IWC) is shaped like a pocket-watch on which wired lugs were later added. Yet, this architecture allows the watch to be rather compact on the wrist and easily wearable. Also, the thickness is limited to 12mm. 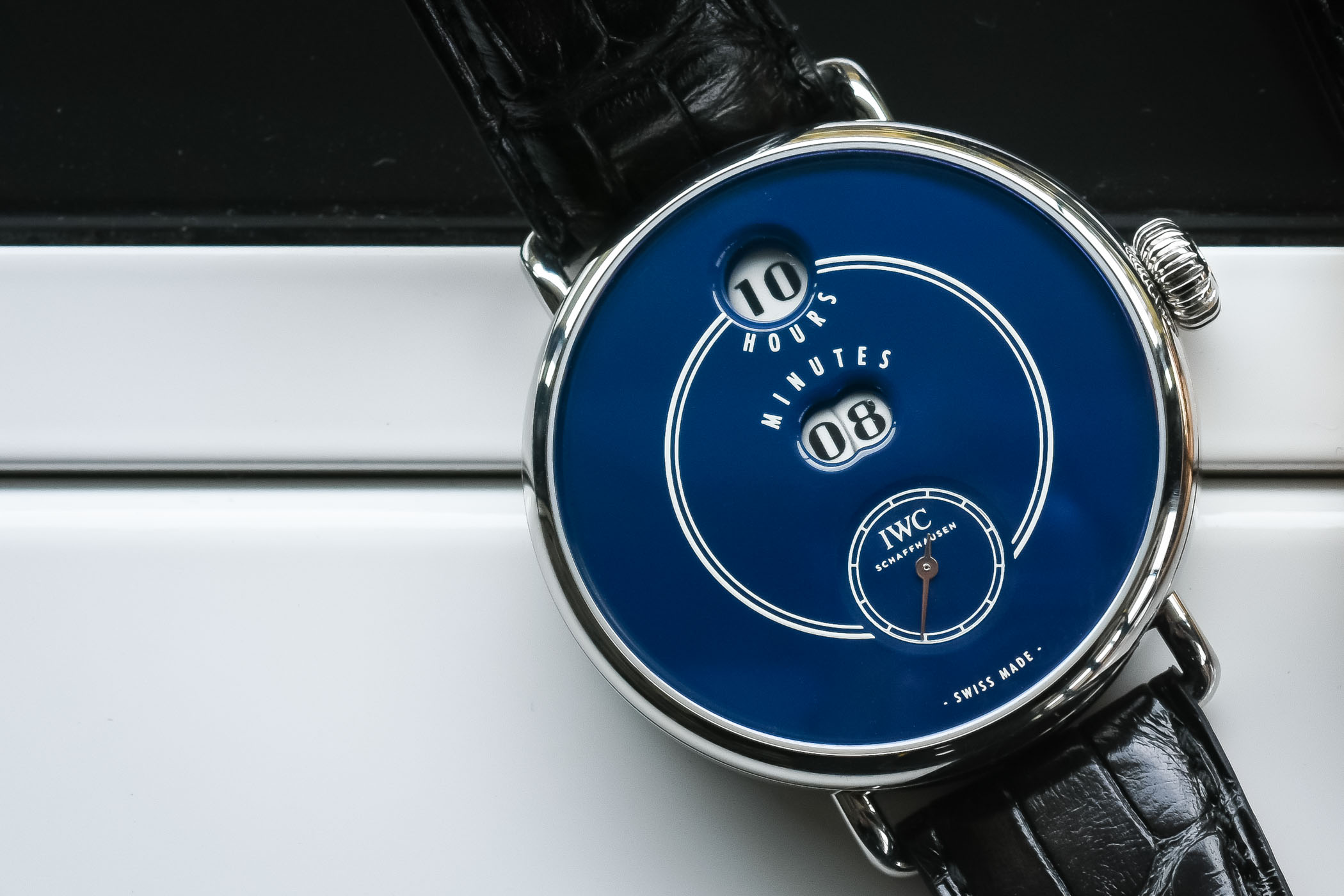 The pièce de résistance of the IWC Tribute to Pallweber definitely is its display. It relies on 3 separate indications: hours on top, minutes in the centre, and small seconds at 6 – all perfectly centred on the dial, just like the antique Pallweber pocket watches. In staying with the antique/pocket-watch theme, IWC decided to use a glossy lacquer that mimics enamel. The result is an attractive render, with a smooth surface that reflects the light and offers a great depth.

For the SIHH 2018, two additional versions are presented alongside the already introduced red gold model. The first one is a 25-piece platinum version with white dial and blue discs. The second, which is the subject of this article, is made of stainless steel, combined with a rich blue dial. The discs are white with black numerals, the dial has contrasting white inscriptions and tracks and the small second hand is rhodium plated. 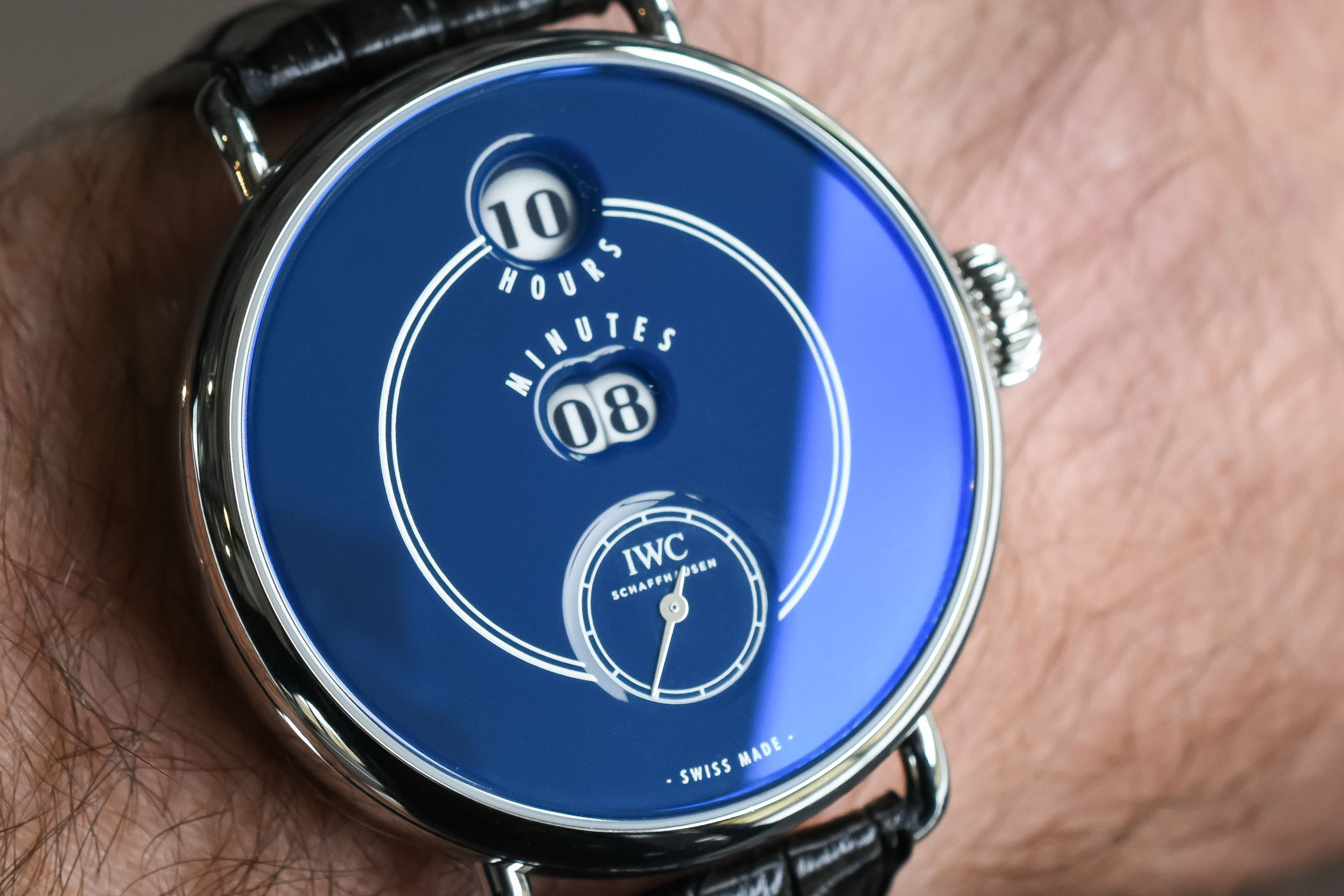 On the movement side, we find the same calibre as used in the red gold version, the newly-developed calibre 94200. This movement relies on a complex twin-architecture. Because jumping indications require a massive amount of energy, this movement has two distinct mainsprings and gear trains. The first classically powers the escapement and the timekeeping part of the movement. The second supplies the energy required to advance the single-minute disc. The movement as seen in the red gold edition

A release mechanism that establishes a connection to the watch’s main wheel train unlocks the train every 60 seconds and then immediately locks it again. The disc for the tenth is cleverly engaged by the minute disc itself. Every 10 minutes, the jump of the single-minute disc releases the disc for the tenth, which moves forward by one position. Finally, every 60 minutes, the hour ring jumps to the next numeral. This guarantees a precise rate and a 60-hour power reserve.

In terms of looks, the movement is true to IWC’s modern production: thin Geneva stripes, large diameter, small balance wheel, blued screws and diamond polished bevels. An 18k gold medallion on one of the bridges marks the 150th anniversary of the brand. Altogether, the IWC Tribute to Pallweber Edition 150 years has been one of the best surprises of the brand in recent collections. Unique, inspired, complex, well-thought out… The addition of a stainless steel version is enjoyable in terms of pricing, but also because of the combination with this great blue dial. Retail price will be EUR 24,000 (compared to EUR 38,000 in gold) with 500 pieces produced in steel. More details on iwc.com.