Today we’re talking with @Watch_Time_It_Is, a California-based seasoned watch collector who owns quite a few pieces that I’d call ‘dream watches’: a Grönefeld Parallax; the LM Perpetual Calendar from MB&F; an early Romain Gauthier; and something that I’ve never encountered ‘in the wild’, a Tuscar Bánú made by Stephen McGonigle. Stephen is an Irish watchmaker, living and working in Neuchâtel, Switzerland, and besides running an Irish pub (what else) he’s extremely good at being a watchmaker! The finishing of all movement parts is so breathtakingly precise and perfect that many watch collectors, with the help of a big loupe, will be admiring his work while their jaws hit the table.

A long time ago, in the early days of running MONOCHROME (at the time MONO was still a ‘slightly’ out-of-control hobby), I met John McGonigle, Stephen’s brother, for the first time at an event organized by Bart and Tim Grönefeld. Stepan Sarpaneva was there too, and so were Kees Engelbarts and Peter Speake-Marin, my hero watchmakers gathered for a spectacular night in Oldenzaal (home town of the Grönefelds.) It was probably the coolest way to get to meet your hero watchmakers. Go-karting in the snow, indoor barbeque (it was freezing outside) and quite a few beers. A few months later, in Basel, I also met with Stephen and can assure you that both brothers are delightful people and remarkable watchmakers! 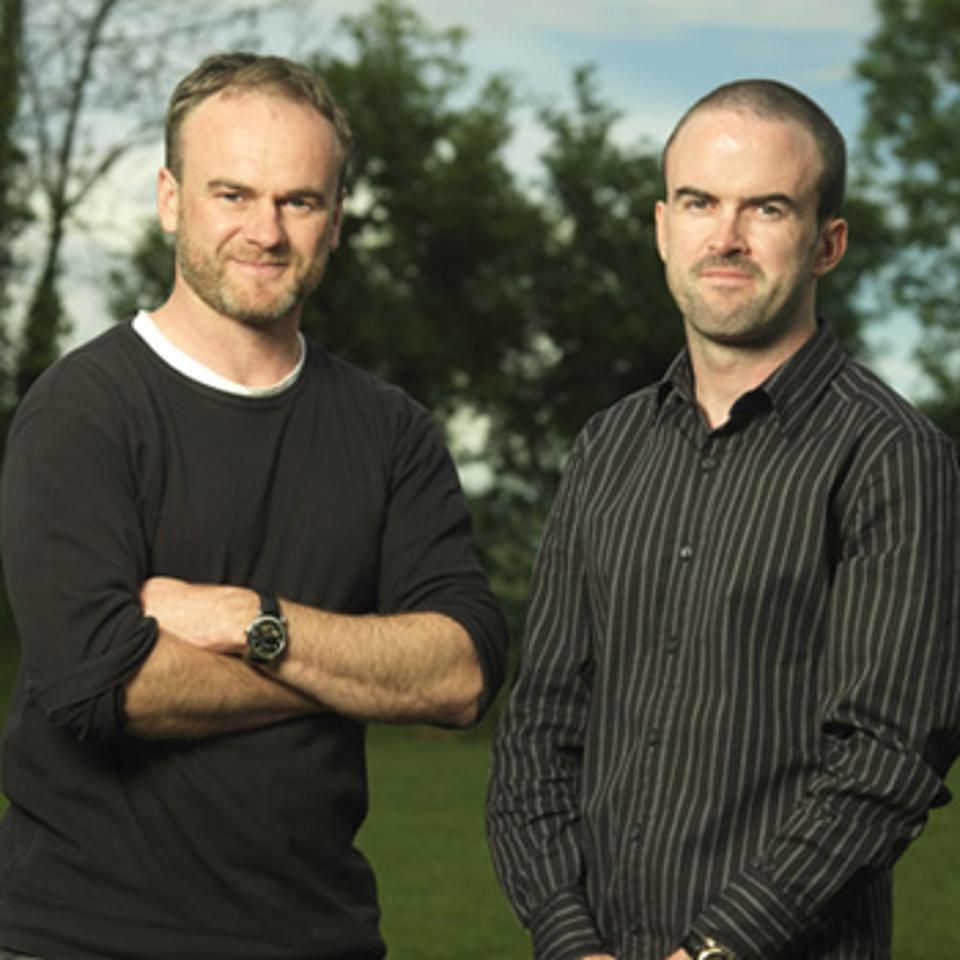 In 2006 John and Stephen started their own brand – McGonigle Watches. However, because John was living in Ireland and Stephen in Switzerland, it was difficult for them to keep working on the brand together. So the last few years it’s Stephen who’s been running the McGonigle Watches brand and who’s doing that insanely great finishing.

Although I’ve known John and Stephen McGonigle for a decade, I’ve never talked to anyone who actually owns one of their watches, so I was very happy that Scott wanted to talk about his Tuscar Bánú. This is the second iteration of the McGonigle Tuscar, and also the more discreet iteration of this Irish beauty.

Frank Geelen, MONOCHROME Watches – How did you come to choose a watch from the McGonigle brothers?

@Watch_Time_It_Is – The simple answer: it fit my collection. But there is certainly more to it than that. You see, I am on my third iteration of watch collecting and have created a strict curation and acquisition process.

The first iteration was undisciplined and messy – no rhyme or reason, purchased on a whim and without structure. I found this approach fulfilling in the moment but missing something holistically. At one point I realized I had a collection of watches, not a watch collection. I sold everything and started over. 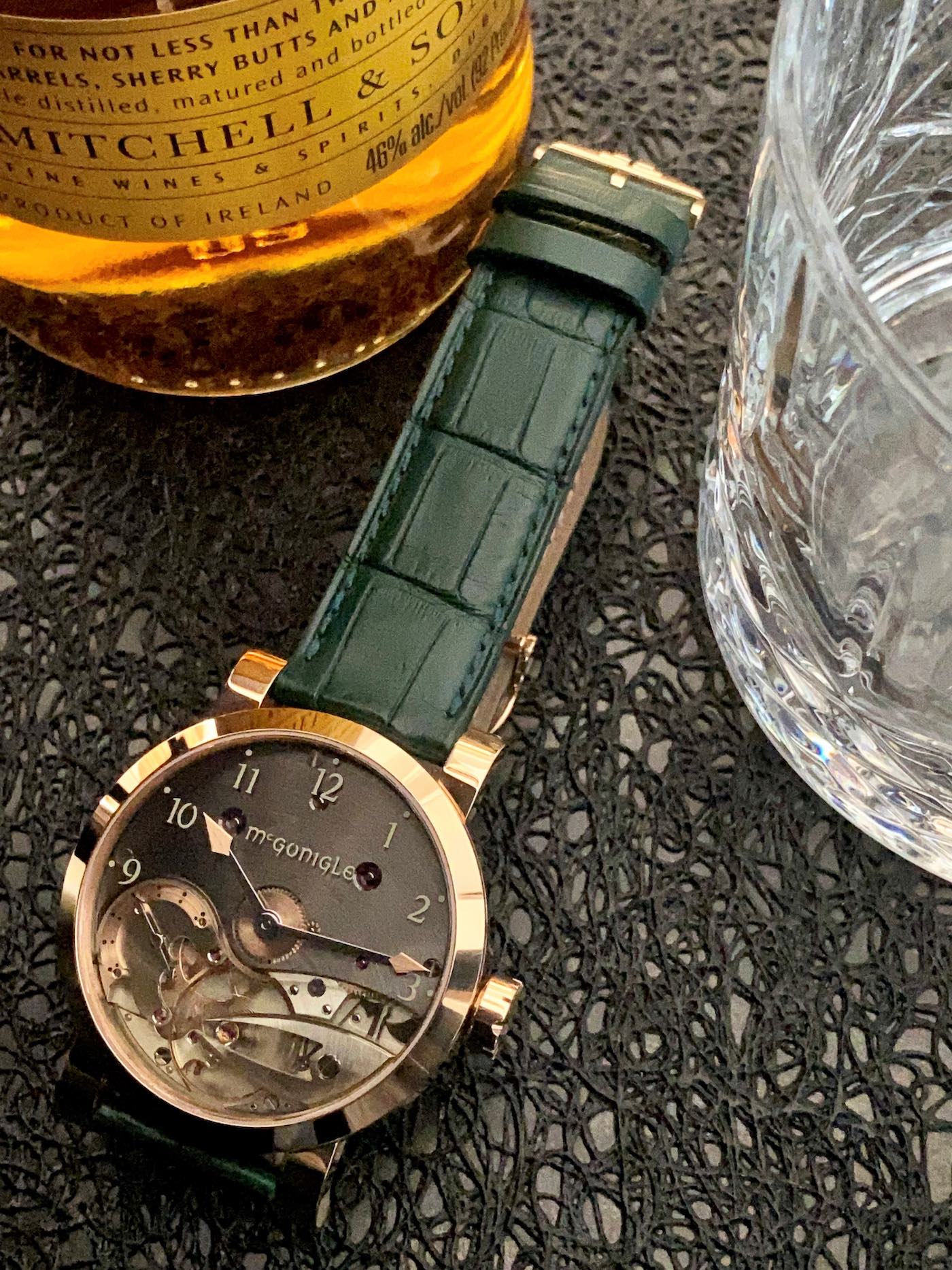 The second iteration was better curated – watches from independent watchmakers, not watch brands (independent or not). However, this collection was underfunded (a relative term, I realize) and I found myself frustrated with what I could not afford more than excited by what I could. The financial challenges of 2008 exasperated the frustration and I sold everything again and stepped away.

Ten years later the collecting bug caught up with me again. I revisited my criteria and added a few elements such as the watch needing to be ‘iconic’ and reflecting the soul of the watchmaker. In addition, I wanted to support the craft and artistry of mechanical watches and the people who design and make them. With so many options for just telling time, I fear this talent could be gone in a few generations. Given the impact watches (as a subset of time measurement) have had on culture, society, and humanity for 400 years that would be a shame. (I suggest a read of Revolution in Time by David Landes for a historical appreciation.) With improved (but not endless) finances I called my favourite dealer (I do appreciate the addiction undertones of that word) and started mapping out a new collection. 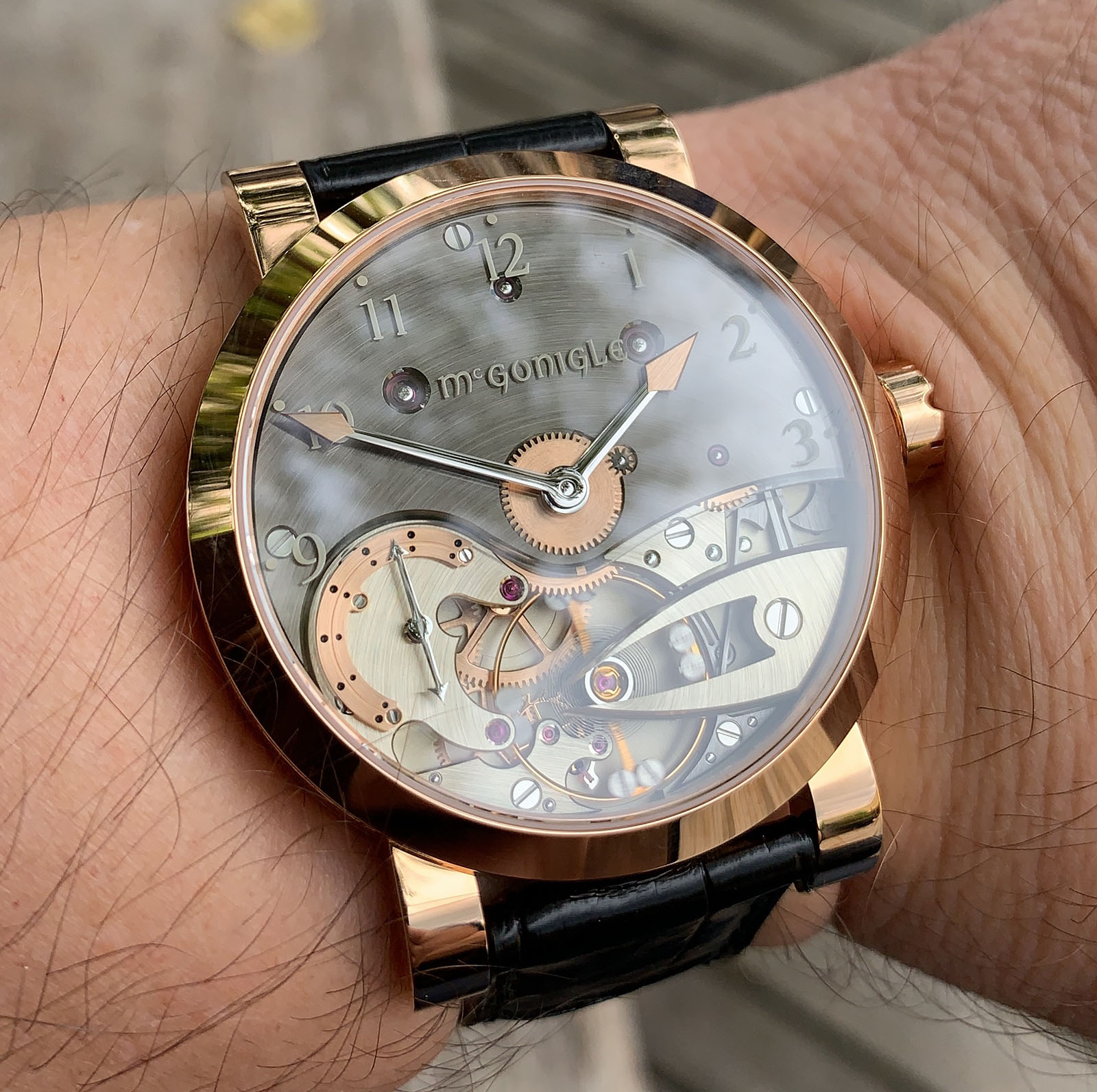 McGonigle was immediately on that list. Living independent artisan watchmakers who have put their souls and heritage into the design of the movement, dial, and casing and whose work is immediately recognized – call it iconic. In some ways, I feel I am ‘collecting’ watchmakers as much as watches and this is, to me, an important aspect of my collection. To have memories of meeting the watchmaker and to know them even in the smallest way brings the soul of the watch to life and adds memories to the piece.

Having heard nothing but wonderful things about Stephen as a person and watchmaker – and with a milestone birthday was coming in 14 months – it seemed right, so I ordered the Tuscar Bánú.

The Tuscar Bánú contains McGonigle’s first in-house movement which was important to me in bringing their soul to the piece. The visual signature of the McGonigle brand is seen in the partial dial and the tension-filled balance design. The engraving on the movement (designed by his sister) is like the winds of Ireland in my hair and makes the watch unmistakably his, the definition of iconic. The fact it is a limited edition ensures that it will not be seen “in the wild” often and I am getting a special ‘piece’ of, and by, the McGonigles.

Equally important – it was great value for the money. Compared to other artisan-created, designed, built, and timed pieces in limited quantity, it was great value. It was still the most I had ever spent on a watch to that point, but I am not sure there are many in my collection that are as good a value.

Is there anything else from the McGonigles that is on your wish list?

That is an interesting question and one I wish I could say ‘no’ to, but alas. When I started the third iteration of collecting, I assumed I would go wide with many different watchmakers rather than deep with a few. What I’ve found as I developed personal relationships with the watchmakers is that I am drawn more and more to their other pieces either by the stories of how the pieces relate to each other (building on an idea, improving a technique, marking moments in their lives) or the natural desire to support them as individuals.

So now, after having spent time with Stephen, wearing the Tuscar Bánú, appreciating the experience, both the Ceol (their minute repeater) and the Tourbillon are on my wish list. (Please don’t tell Stephen or my dealer.)

Both are much more expensive – which is a problem – and I find the front of the Ceol a bit understated from a design point of view but the movement and back of the case are very special. I can already hear Stephen whispering in my ear that “we can do something special with the front of the Ceol“. This personal touch and relationship with an artisan watchmaker are both a blessing and a curse – it certainly makes it harder to just cross something off the wish list.

What is it in their work that you admire so much?

Several years ago, I purchased a kit from a watch supply store and assembled a watch. Mind you, assembled – not designed, crafted, constructed – just assembled. My appreciation for just the mechanical skills needed to make a simple watch work, much less run with accuracy, went from theoretical to practical. So, it is fair to say that I have great admiration for anyone who can make a mechanical watch work, period.

To then conceive and design a watch from scratch is another crank of the wheel in talent and admiration. To find an individual that brings a balance of aesthetics, precision and technique is rarified air to me. There are very few individuals working alone or in small groups carrying this level of craftsmanship forward. 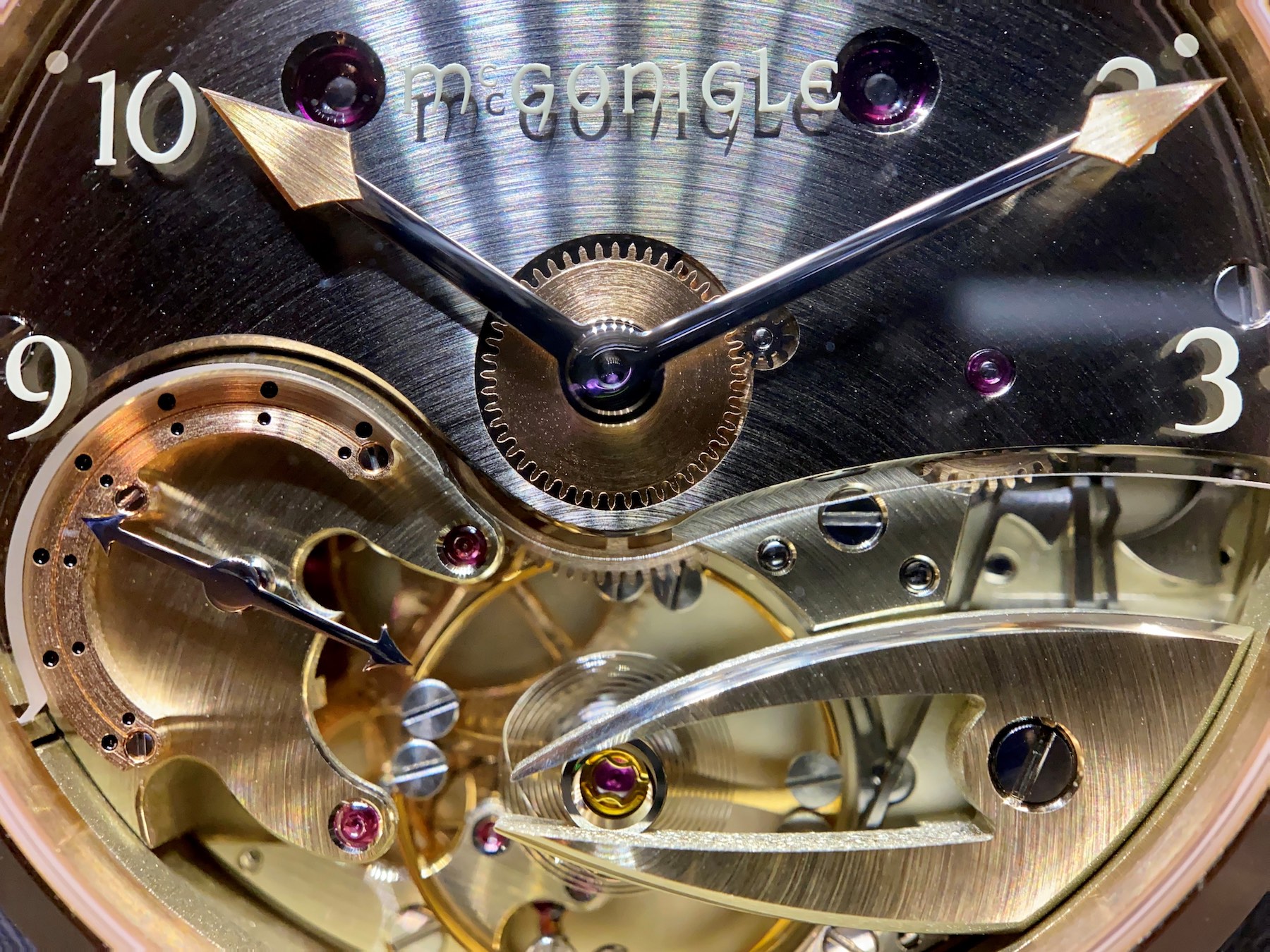 However, the result for many is amazing watches that fail to say much of anything about the watchmaker. They are maybe stunning, technically complicated, rare or expensive. They may “look” like their creator, but they do not say much about their creator.

I feel the McGonigle’s pieces (and a few others, but that is for another day) reflect themselves without losing themselves. They bring all this as well as their personality, heritage, talents, excitement, energy and wit to the canvas.

What is your advice for anyone in the market for a McGonigle?

Get one! But make sure you get to know Stephen, even for an hour, so he can bring the piece to life for you. 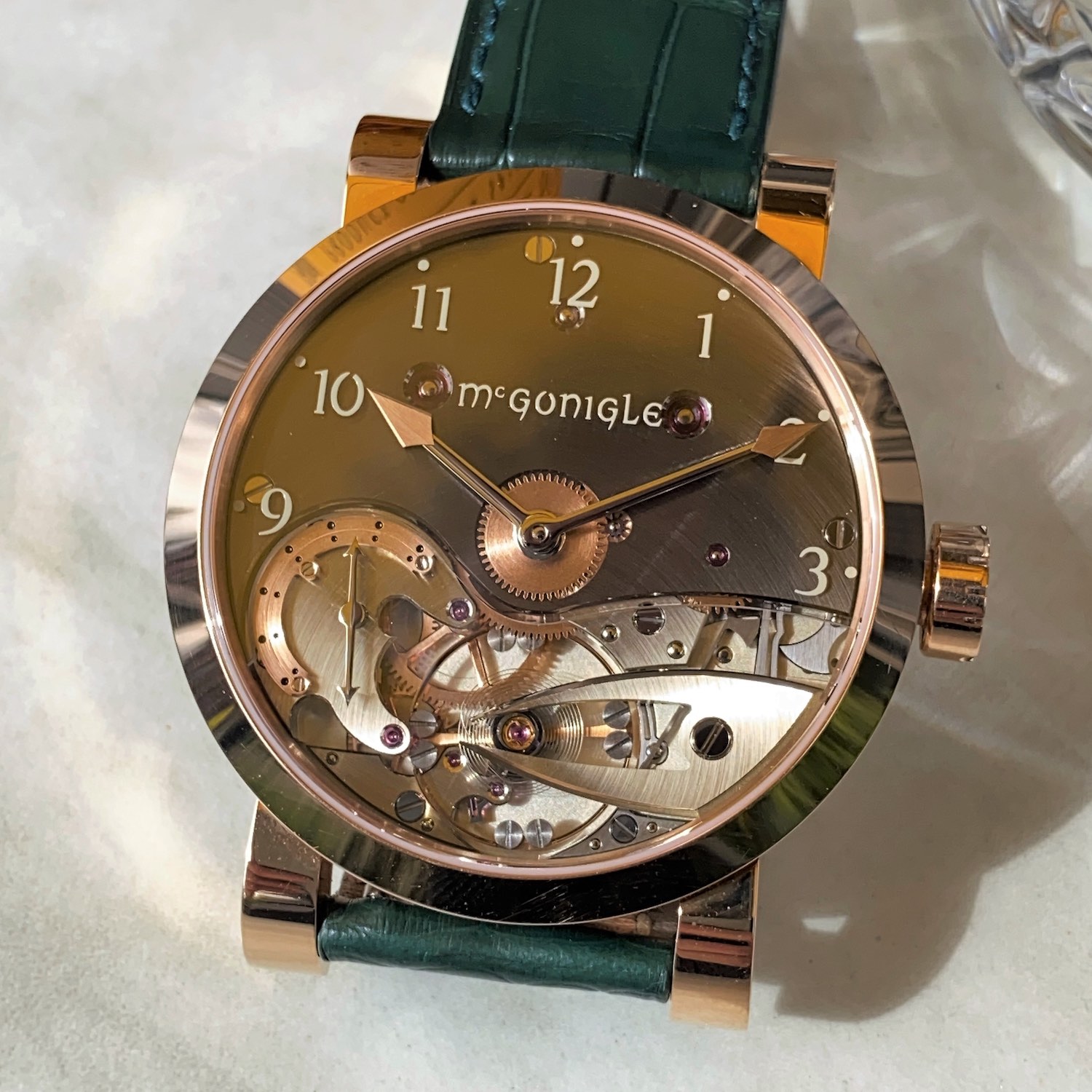