As we explained to you a week ago, weird times call for agility and confinement has forced us to change a bit the way we work and what we’ll cover in the coming weeks. Does that mean you won’t see great content on MONOCHROME? Certainly not. In fact, we currently have more time to refocus on certain things we tended to forget, and this goes for “The Collector’s Series“. The idea is to show you more of the human side of MONO’ and its team of editors, and of course, to share the passion that drives us every day, our love for watches. So today, I’m interviewing the man I’m working with on a daily basis, the founder of this magazine, Frank Geelen. For this instalment of “The Collector’s Series”, he talks about his delicate, desirable Daniel Roth Small Seconds in Steel with Salmon Dial.

Daniel Roth is one of these legendary names of the industry, but the low-profile kind of names. His influence on contemporary watchmaking is huge, as he’s one of the men behind the renewal of Breguet, a great influencer to the indie watchmaking scene, a genius designer and a watch entrepreneur under his own name – with a company that helped Bvlgari shaping the superb watches we know today. Prior to that, he worked at Jaeger-LeCoultre and Audemars Piguet. And when you combine this impressive background, you can easily understand the watches that bear his name. Originally designed, yet refined and elegant, mechanically impressive for some models but often low-key. This is exactly the kind of watch we’ll talk about today… So it is time for my great friend and associate Frank to talk about his beloved salmon-dialed Daniel Roth watch.

Brice Goulard – Why a Daniel Roth?

Frank Geelen – When I was just getting into watches, a “watch buddy” of mine told me that he liked Daniel Roth’s watches. I had no idea who Daniel Roth was or what his watches looked like, so I searched online. In general, the internet was not as over-documented on obscure topics as it is today. So information about Daniel Roth was scarce at best. The only place to find some information on DR was Watchprosite and it was mainly press info on the latest DR watches and the odd review. Most info was on the latest pieces made under the reign of THG and the first under the helm of Bvlgari (I’ll explain this later) and they didn’t appeal to me… at all. However my interest was awaked and I searched on, finding the occasional DR watch for sale on eBay or one of the sales forums of that time (Timezone, Watchprosite, TZ-UK and Watchuseek) and these looked different. And much better than what I had seen until then.

This is all around the year 2000 and the big-bigger-biggest hype in watchmaking was about to start. At that point, Panerai made BIG watches and there was the IWC Big Pilot, and these watches stood out due to their enormous size. I kind of liked big watches and my budget was spent on an old Heuer Autavia (calibre 12 with decompressions bezel) from the 1970s and later a TAG Heuer Monaco that was considered big at the time (I still remember the numerous remarks from friends, family and colleagues about the Monaco!). For me, the watches from Daniel Roth sort of disappeared to the background, partially because the ones that I thought were pretty, were too small for my taste… I thought. But every time I stumbled across a photo of one of the older watches I was intrigued. They were small but so incredibly elegant and well-finished. 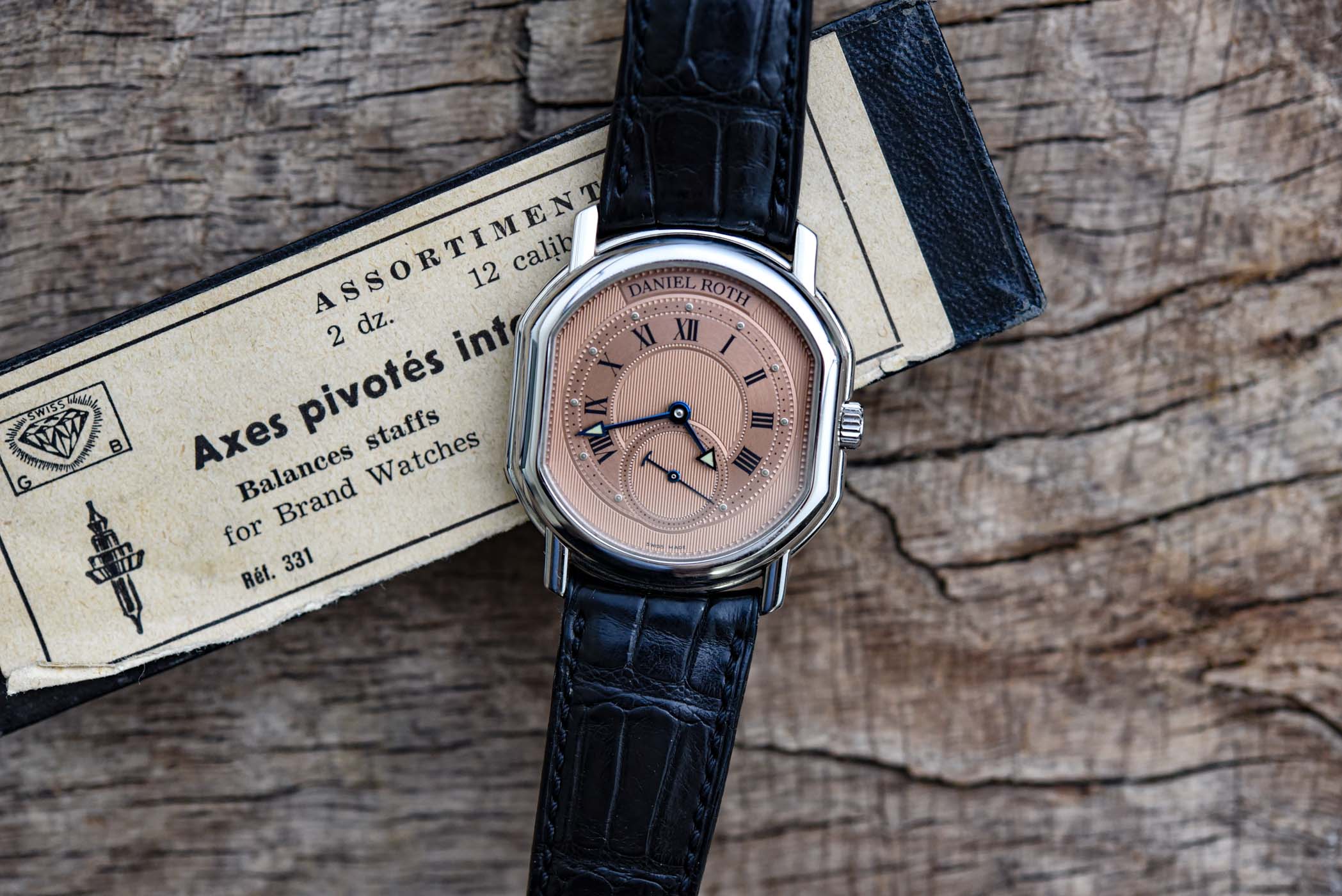 Over the next many years I kept looking for DR watches for sale and for more information about the man and his watches, but there never was much solid information to be found. In the online world, you could stumble on the vast number of stories about George Daniels and Philippe Dufour and watch designer Gerald Genta. But there was simply not so much information about Daniel Roth and that hasn’t changed much.

What intrigued me from the first moment when I saw the older watches from Daniel Roth, was the design, the odd case shape and the refined dials and the movement finishing. Since hearing the Daniel Roth name for the first time, it was a quest that lasted more than 15 years before I bought this little gem. And every time again, I’m blown away with how incredibly lovely it is, how well finished, and beautifully shaped. And that salmon-colour guilloche dial simply puts a smile on my face every time I see it. 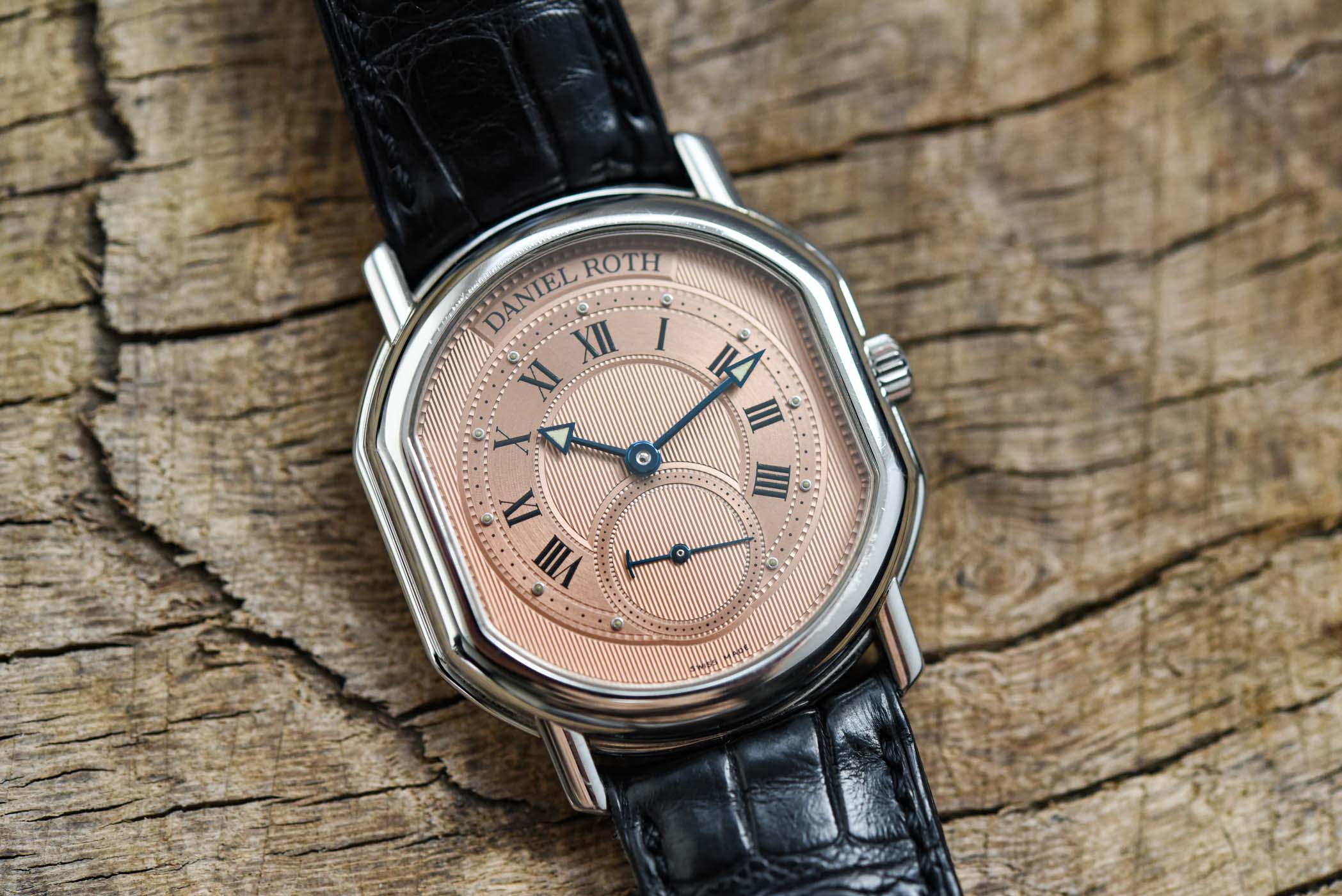 Why this particular model?

It came on my path… it’s as simple as that. As I was searching for a nice DR for one and half-decade, I looked at the usual places from time to time. Of course, I was looking for one that I would like a lot, but it also had to fit within my budget. So I was not necessarily looking for exactly this one. A few years before I bought it, a friend owned a Daniel Roth that I tried on my wrist and that made quite an impression. It was a white gold version, 35mm across, grey and steel dial, and it was just so incredibly beautiful. I knew that when I would come across a similar model, and the price was right, I would not hesitate and buy it immediately. A few years later I found this one on Chrono24 and it was offered for sale by an English gentleman with whom I’m still in contact. The price was right, the model was exactly the same as the one that I tried, so I liked it, and that dial… that dial… oh my, this was even better than a dream come true. I never dared to dream of that lovely Daniel Roth with a small seconds (that I once tried on my wrist) and salmon-colour guilloche dial. 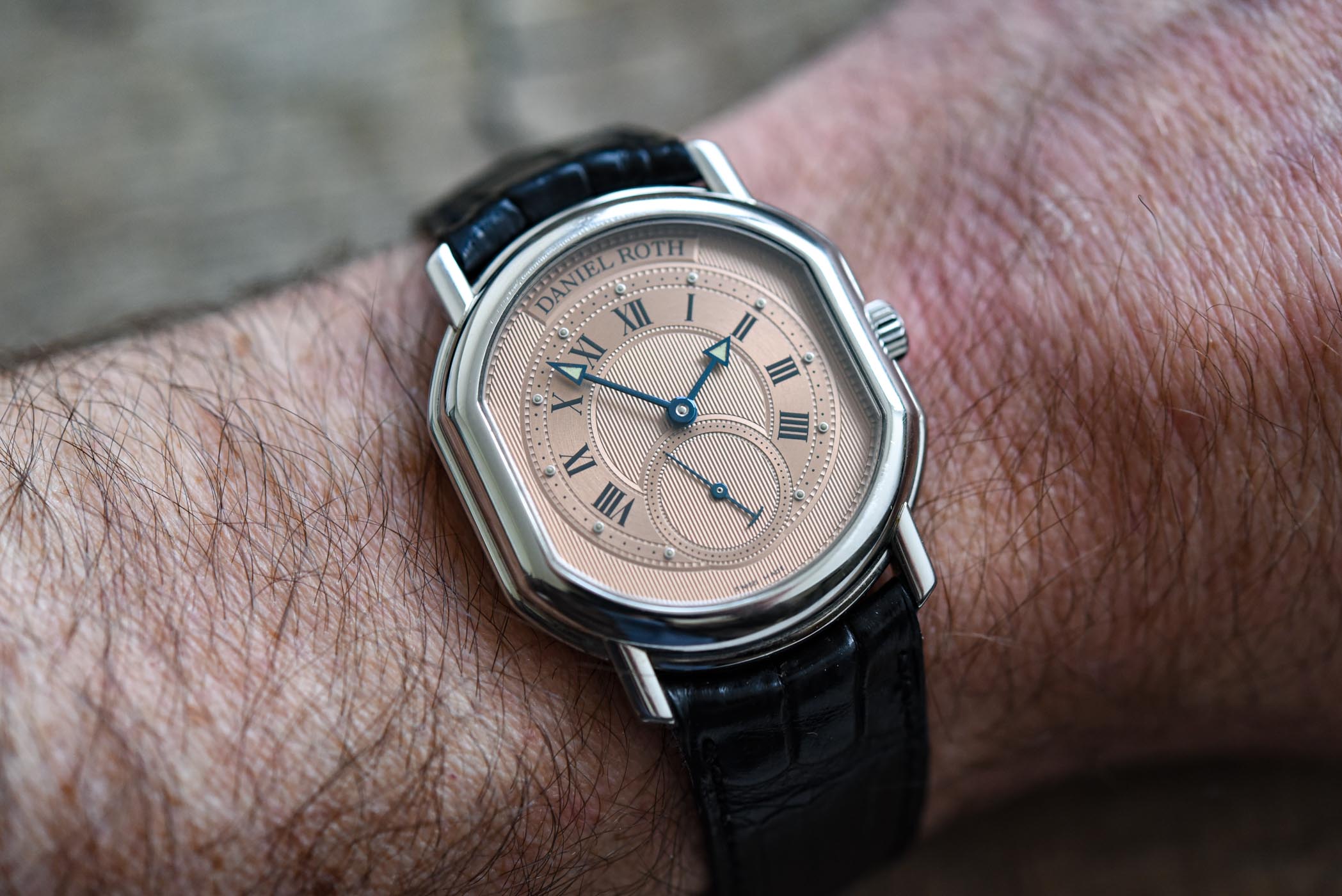 But I must also say that Daniel Roth watches are still underappreciated, so for me, the hunt for another Daniel Roth isn’t over yet.

Oh, tell me more, what is on the wish list?

The first series Papillon – like the one we covered here – is very high on my list, but almost impossible to find. However, a Daniel Roth QP or a tourbillon are also on my wish list. Although Daniel Roth watches are rather underappreciated, tourbillons and perpetual calendars will still require a serious budget. I could also be interested in another salmon dial but with central seconds instead of the small seconds (like mine.) Or maybe even one that comes on that funky steel bracelet; that I call the ‘Lego bracelet’. 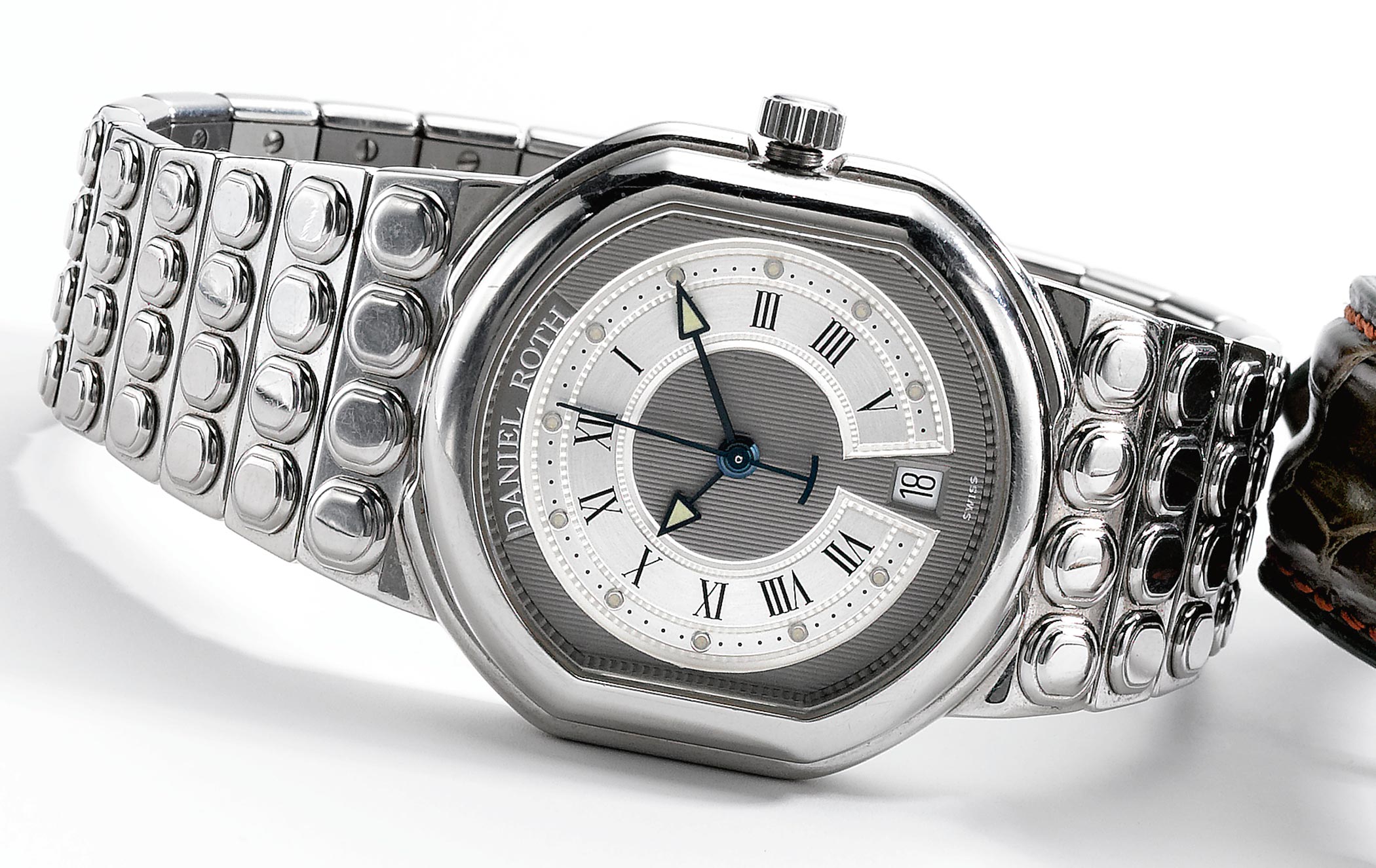 The older Daniel Roth watches are so incredibly well finished. They are so refined and their design is always so perfectly balanced. To me, that’s something unique and something that I sometimes dearly miss when I see what many watch brands are introducing these days. I love some of the well-proportioned, superbly finished, and elegant timepieces… whether they come from Japan, from Germany or from a Swiss/French watchmaker who was born and raised at the French Côte d’Azur. 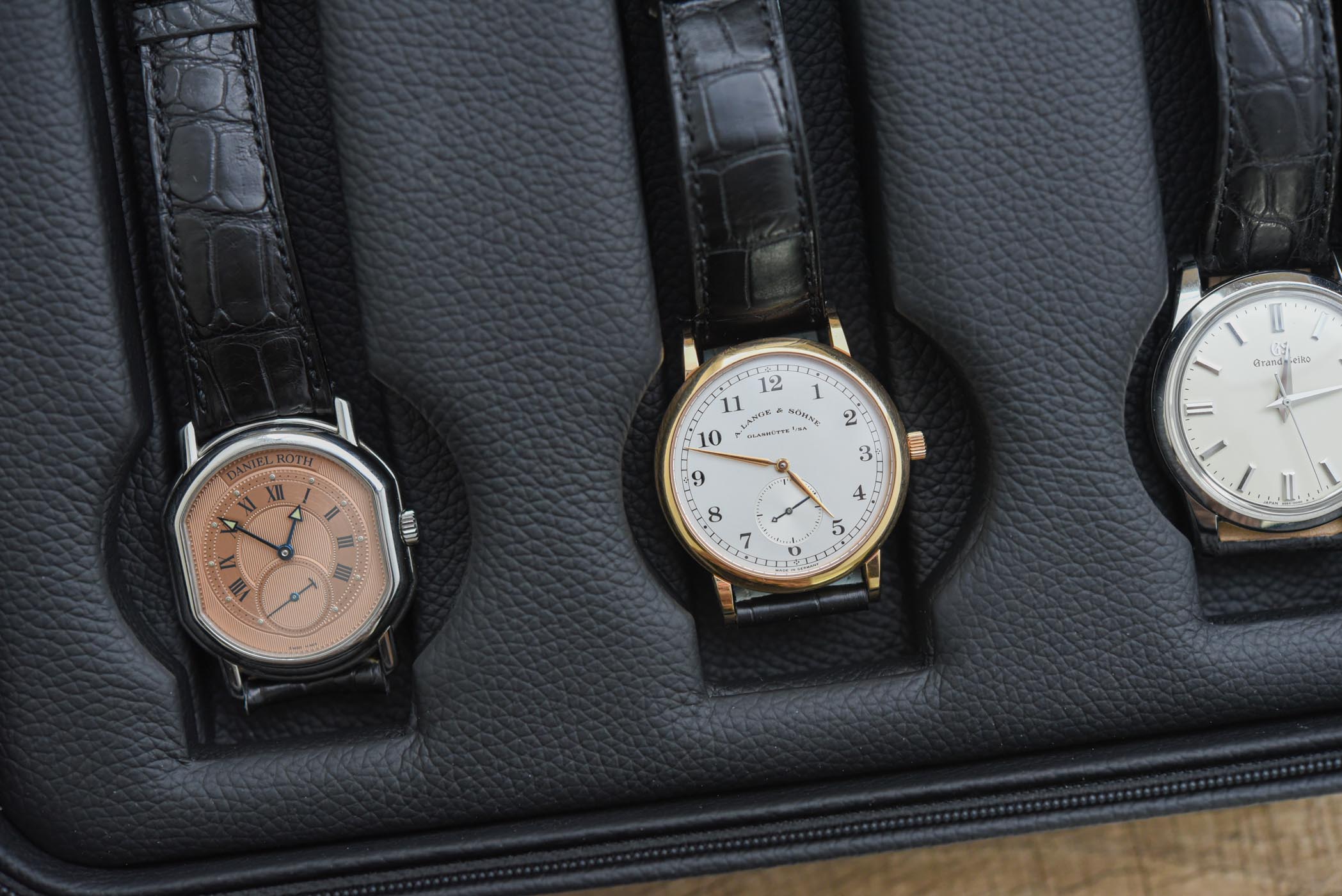 What is it in Daniel Roth as a watchmaker that you admire so much?

At first, I had no clue who the good man was but slowly I found out more. As said before, there simply was not much information on Daniel Roth to be found online. At a certain moment, a new brand named Maitres du Temps was initiated. Under this moniker, some independent watchmakers got to join forces in order to create something spectacular and Daniel Roth (among others) was invited to be one of the first participating independent watchmakers. I met Daniel Roth (and Roger Dubuis and Peter Speake-Marin), but I don’t speak French and Daniel Roth doesn’t speak English. So that was that…

A few years down the line, and a good share of research, I got to know more about Daniel Roth. When you read about his life, it’s an impressive story. Daniel grew up in Nice at the French Côte d’Azur. His father, originally Swiss, moved to Nice and started a watch repair shop. That’s where young Daniel did his first apprenticeship before he moved to Switzerland in 1967 and worked at Jaeger-LeCoultre and Audemars Piguet for a brief period.

Back then, Chaumet owned the name Breguet and the owners asked Francois Bodet to run the brand in Switzerland for them. He hired the young watchmaker Daniel Roth and tother they defined what is now known as Breguet. Daniel Roth designed the Breguet ref. 3130 and he was instrumental in determining the design language for the brand, which they derived from the old pocket watches. Later he developed, among others, a very thin tourbillon. And that amidst the quartz crisis! 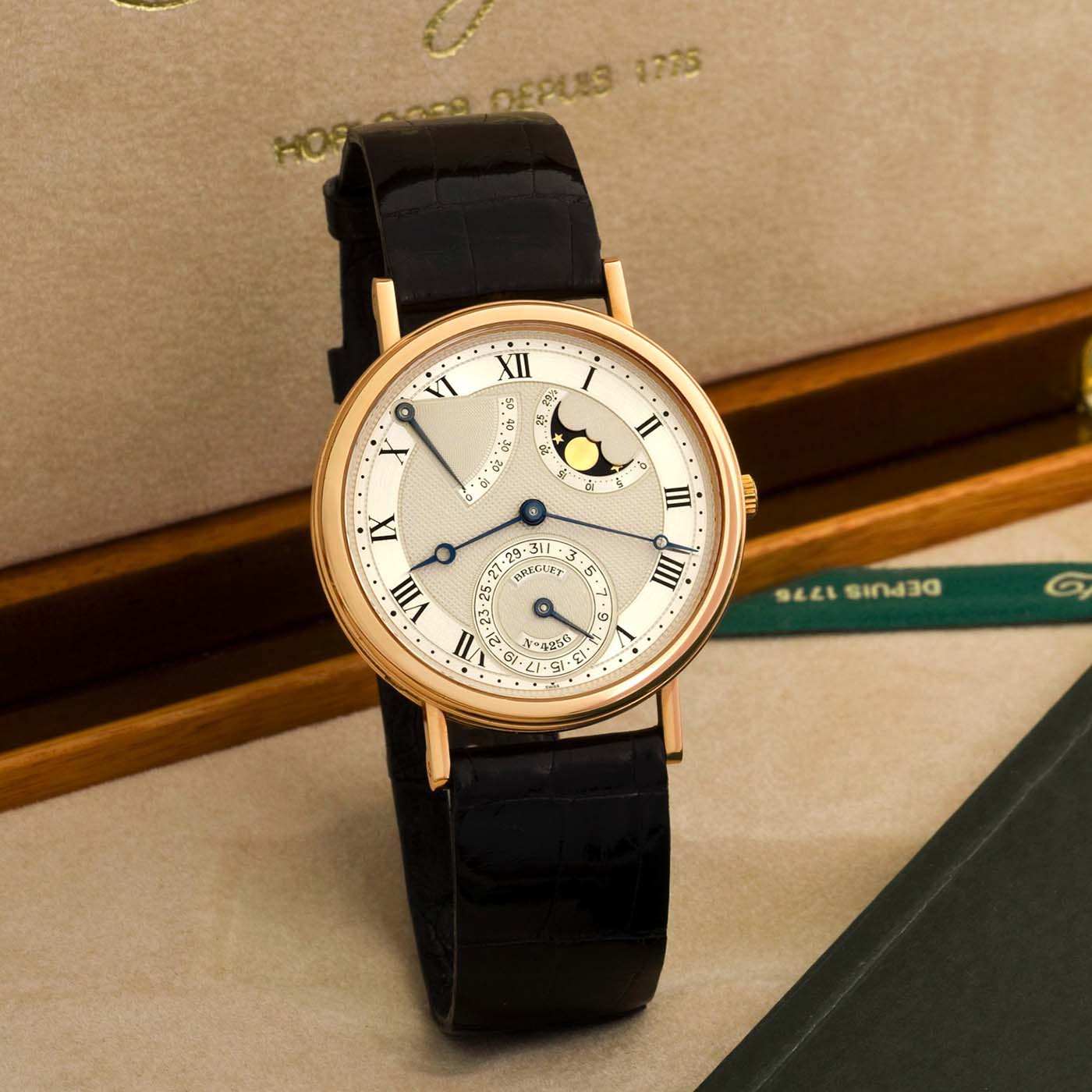 For 15 years Daniel Roth together with Francois Bodet sort of created the brand and its style/looks: flat, elegant, chic, refined, superb finish, guilloche, round cases with straight lugs and the recognizable case-band fluting. In 1987 Chaumet went bankrupt, Breguet was bought by an investment fund, and Daniel Roth started to set up his own brand. In 1989 Daniel Roth SA was founded. I guess this makes his one of the first, if not the first, independent watchmaker as we know them today. He had good times, but also not so good years. In 1994 his investor pulled out and The Hour Glass (Singapore-based high-end retailer) took over and when the Asian financial crisis struck in 1997 THG sold Daniel Roth SA to Bulgari.

Now to answer your question, I admire how Daniel Roth shaped Breguet. And how he later set up his own brand, with its own distinctive case shape, high-quality movements, superb finishing, and that in a period when high-end mechanical watches were not as popular as they are today. This coherent approach is remarkable for a brand, let alone for a young watchmaker who grew up in Nice, far away from the Swiss watch industry.

Nowadays he makes watches again, totally independent, however not anymore with his own name on the dial. The new company was named after his only son, Jean-Daniel, and wife, Nicolas, so on the dial, it now reads Jean-Daniel Nicolas. The only watch he makes is the 2-minute tourbillon and if budget and availability permit, one of these watches by Daniel Roth is top on my wish list! 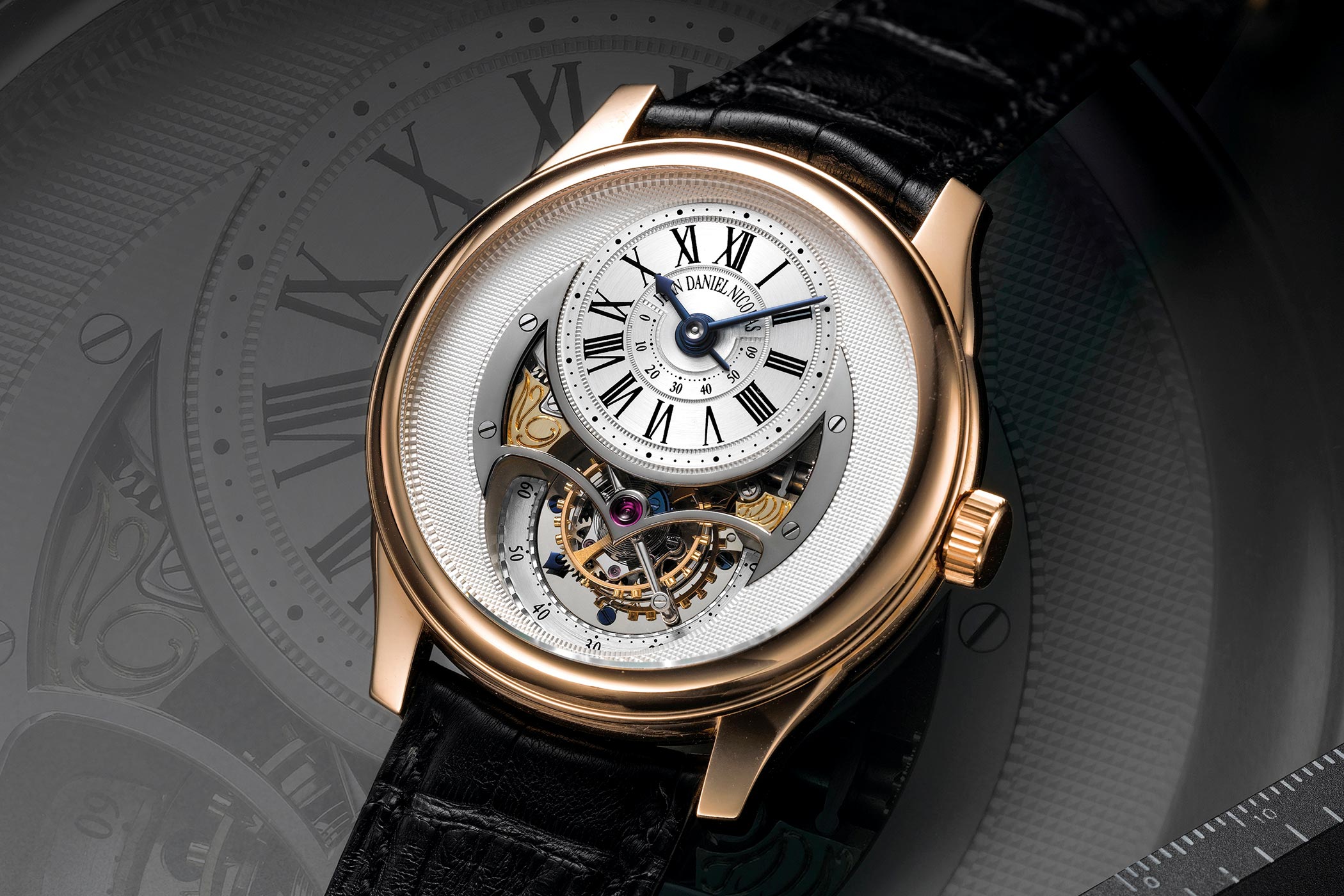 Any tips for people who like Daniel Roth’s watches and want to buy one?

There are 3-4 phases in Daniel Roth watches, the first being the period when DR himself set up shop. Small, elegant and extremely well-finished watches. There are roughly two different sizes. The smaller one measures 32mm from left to right (excluding the crown) and some 35mm from top to bottom. The larger one measures 35mm by 38mm and that’s the size that I bought. It’s not too small, but I would not get a smaller size as that would not look good on my wrist. For smaller wrists, this might be an option, but first, try one on so you know how it looks and feels. 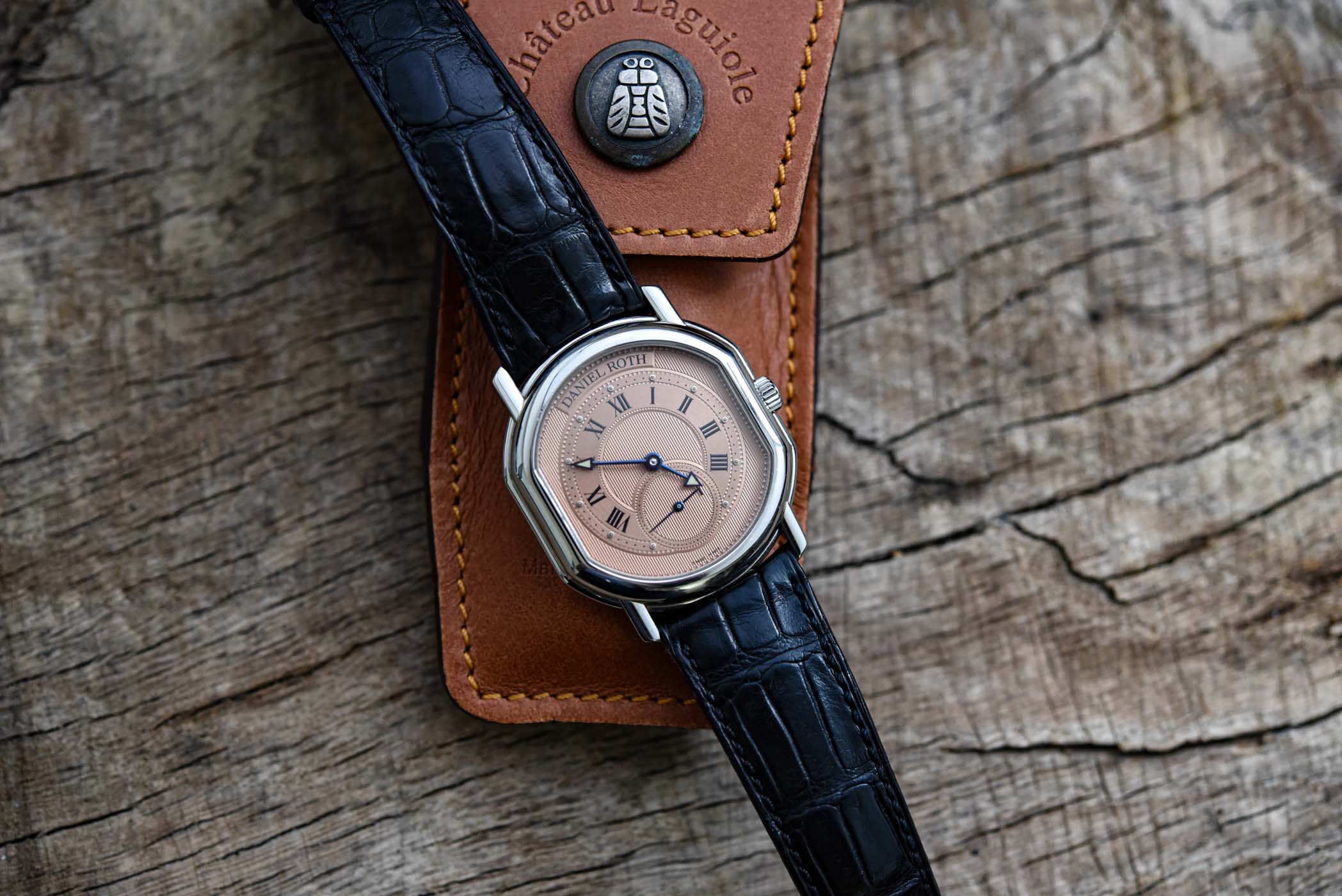 The next phase, when DR was under the reign of The Hour Glass, already showed some larger watches and when Bulgari got involved (at a time when the big-bigger-biggest hype in watchmaking started) the Daniel Roth watches also grew in size. The last phase was when the Daniel Roth name disappeared from the dial, being replaced by the Bulgari name.

First and foremost, try and find one that you like, and secondly be aware of the different sizes!

Racing along the tight curves of the Formula 1 city circuit, historic cars compete in the Grand Prix de Monaco Historique, a reference in...