We’ve covered a lot of small, independent luxury brands here at MONOCHROME. Naoya Hida & Co. and De Bethune are a couple of examples, yet both come from countries known for fine watchmaking (Japan and Switzerland, respectively). RGM Watches is an independent American brand with four in-house movements since its founding in 1992, including a tourbillon and tonneau-shaped caliber. The watchmaker is known for elaborate guilloché and enamel dials, but there’s also a pilots line with straight forward dials and ETA calibres. The Model 600 Chronograph falls into the latter category with a no-nonsense design for both collectors and flying/racing enthusiasts.

Before Switzerland became synonymous with fine watchmaking, America was a leader with Hamilton, Waltham, Ingersoll and Elgin leading the way in the 19th and first half of the 20th century. It was American ingenuity that led to precise mass production of interchangeable watch parts around 1850, known as the American System of Manufacturing. In the following decades, prices would fall without a sacrifice in quality and mass produced watches were on par with hand-made counterparts. 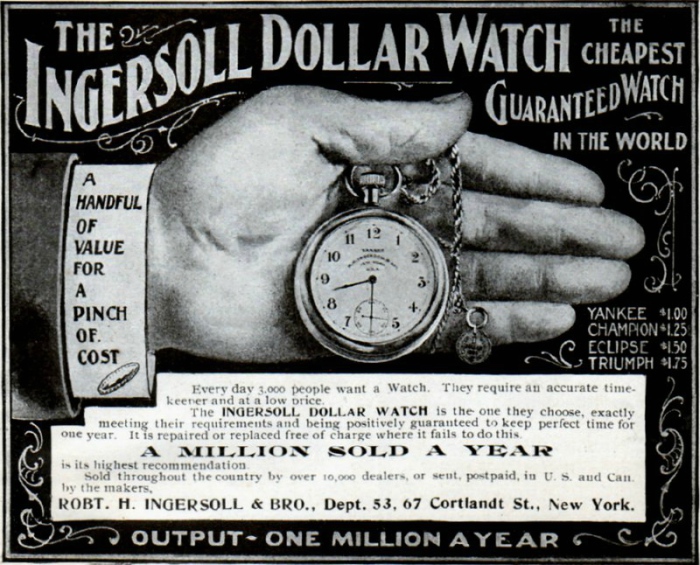 An early add for the Ingesoll Yankee Dollar pocket watch.

As the 19th century reached its 4th quarter, Swiss watch sales were crashing as America’s watchmakers thrived. In 1876, a Swiss representative traveled to America on a reconnaissance mission of sorts, attending the Centennial Exposition in Philadelphia. Waltham’s automated machines were on display and shocked the Swiss with their speed, precision and efficiency, an incredible advantage to the arduous hand-made processes. The English response was to increase tariffs and restrict imports, but the Swiss were determined to compete.

It wasn’t long before Swiss watchmaking began transforming from small workshops scattered around the country building parts by hand to centralized factories with modern automation. It wasn’t on par with American production (yet), but kept them in the game. Believe it or not, it was a time when Switzerland was producing American “knock-offs,” not the other way around. By the start of the 20th century, the Swiss had mostly caught up, combining automation with traditional hand craftsmanship, resulting in many high-end, complicated watches compared to the reliable yet simple American pieces. 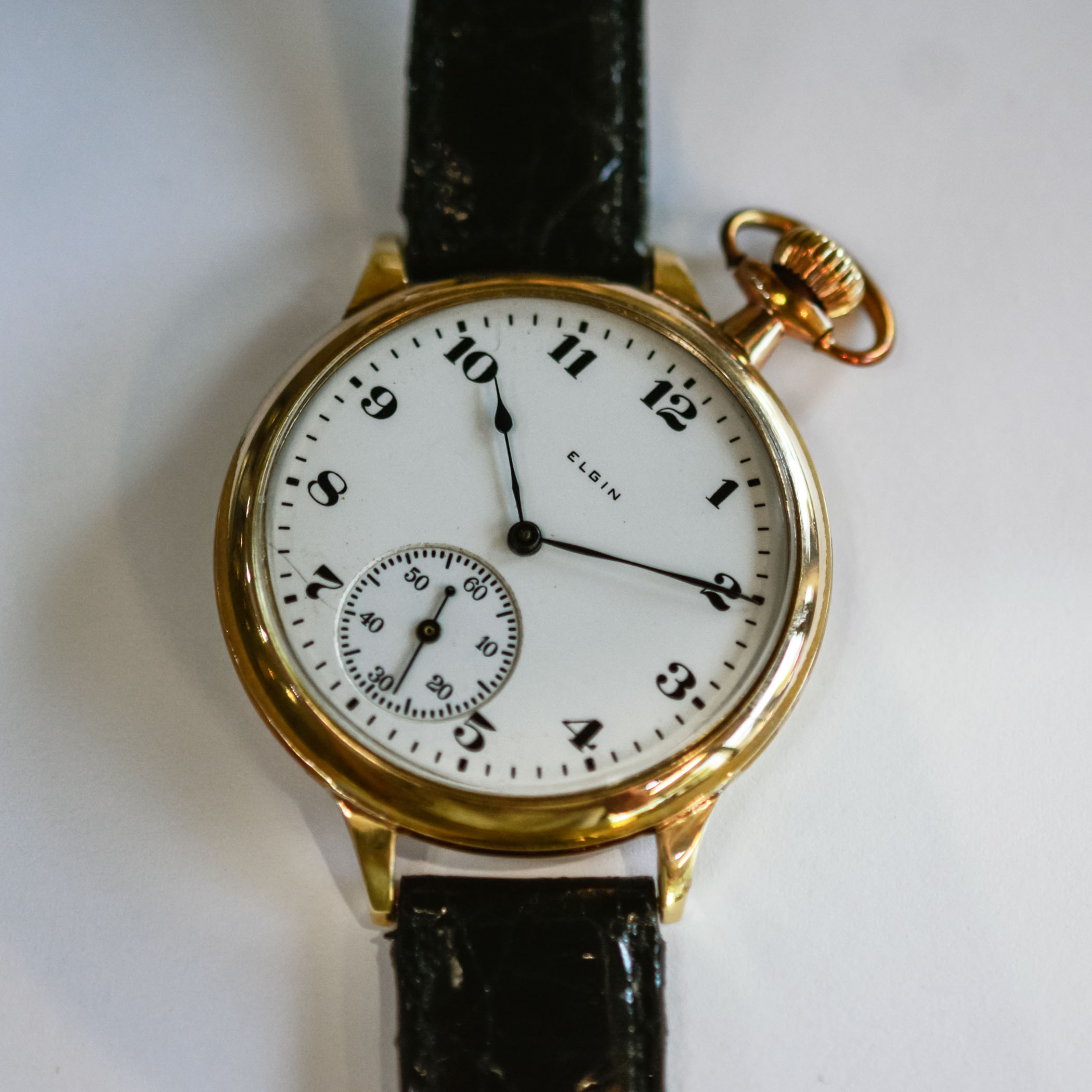 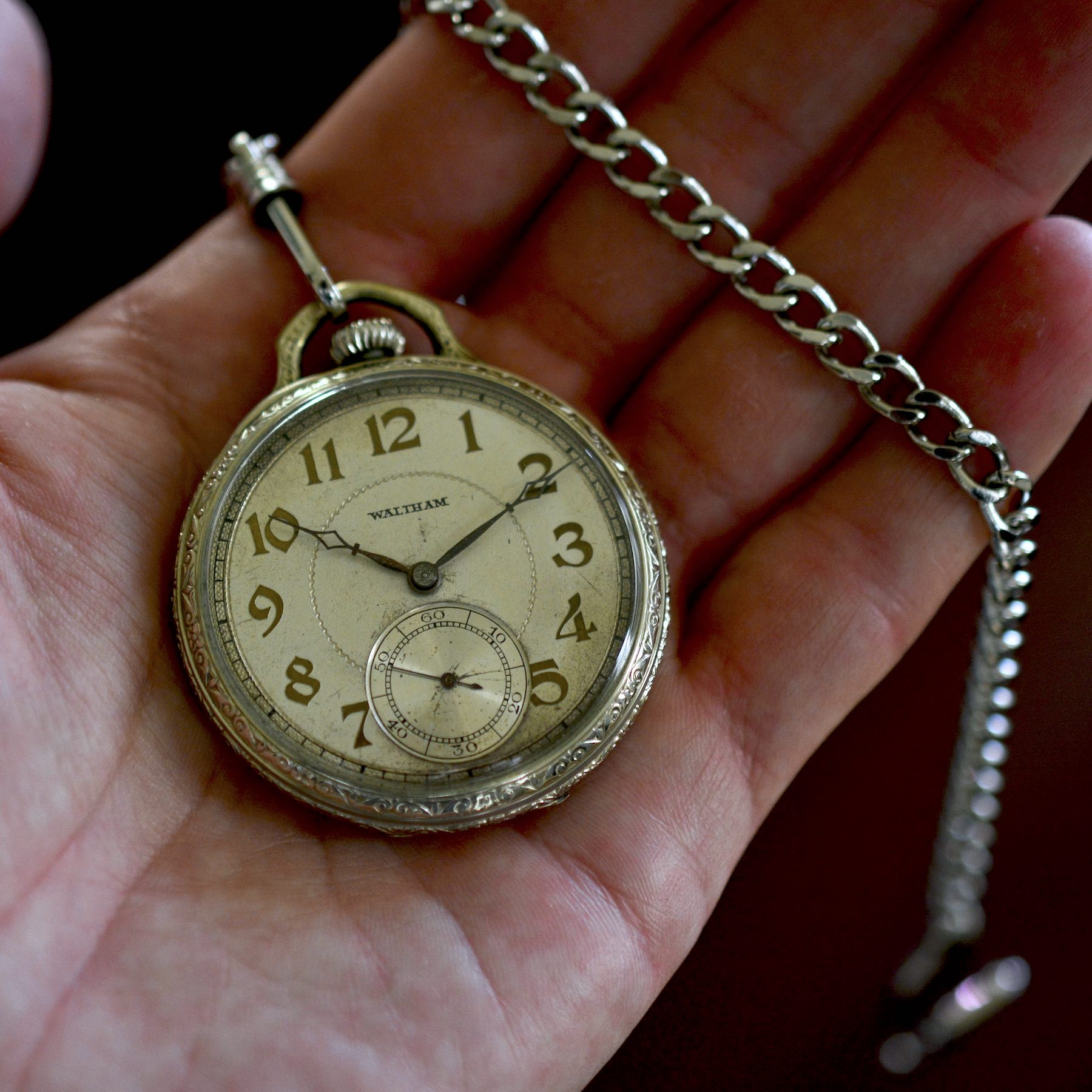 Switzerland eventually perfected (partially) automated production of complications while the Americans were preoccupied with simplicity, often focusing on the military. Following World War II, the Swiss had surged into the American market with complicated watches that had more appeal to those from homegrown brands. By 1969, Hamilton ceased production (becoming a Swiss company) and the illustrious chapter of American watchmaking had come to an end. Of course, I can’t cover a century’s worth of history in a couple of paragraphs, but that’s the gist of it.

Founded in 1992 by Roland Murphy, RGM Watches brought watchmaking back to America as a vertically integrated manufacturer. There’s a big difference between “assembling” a watch in America and truly building one. Although there are now four distinctive in-house movements in production, the brand maintains an impressive portfolio of more affordable watches with Swiss ETA automatics, which is what we have here. 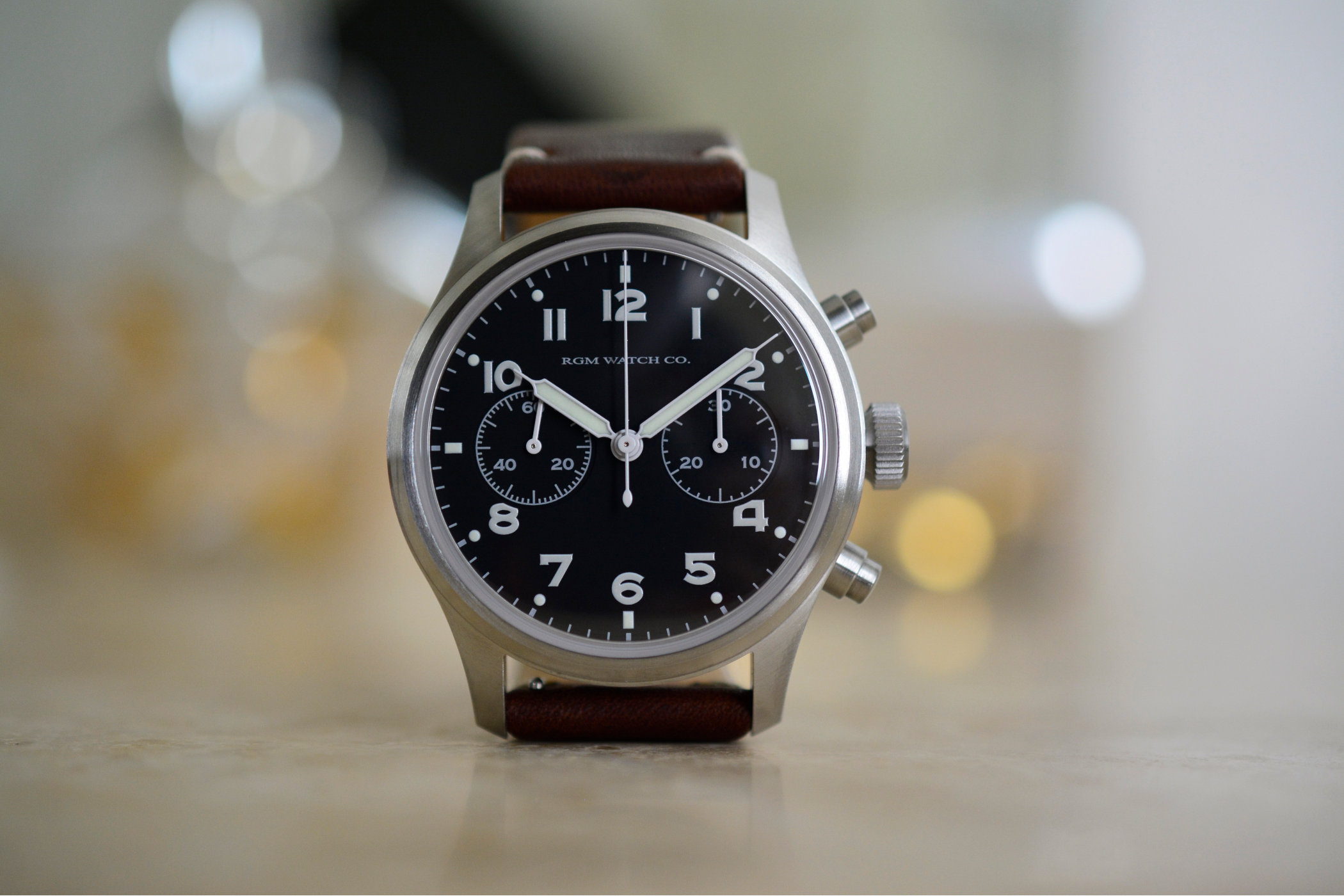 The Model 600 Chronograph case is 316L stainless steel with a diameter of 42mm and height of 12.4mm, or 14mm with crystal. That crystal is a raised, box-style sapphire and a first for RGM, providing retro distortions at sharp angles. It’s an important detail as the watch is a throwback to the 1960’s and 1970’s. The entire case has a satin bushed finish with a period correct solid case back, while the pushers at 2 and 4 o’clock have a simple military aesthetic. The crown doesn’t screw down, but there’s a doubled gasket that allows for a water resistance rating of 100 metres. 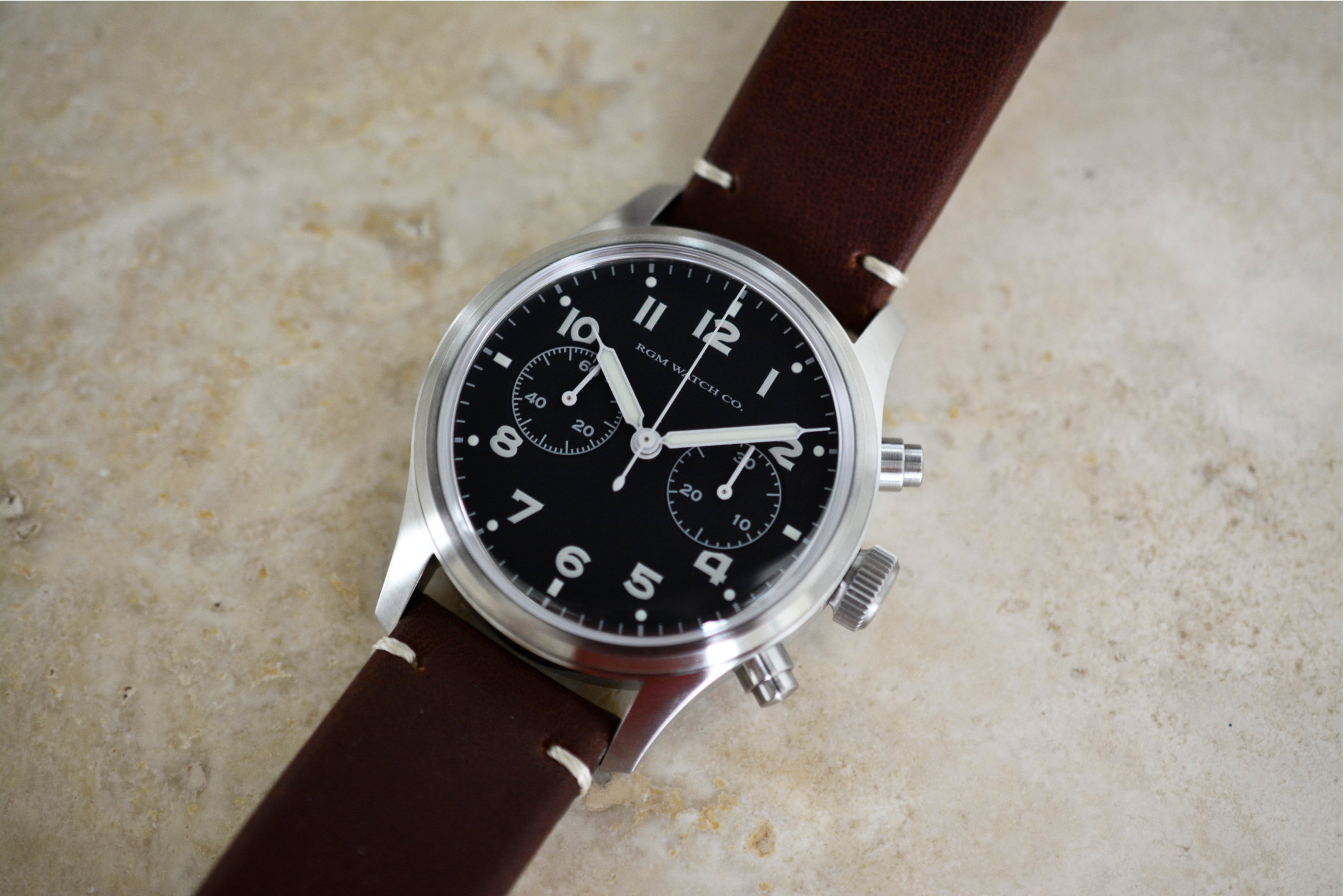 There’s an ongoing theme with several RGM watches (usually with the hands) involving a keystone, which is the central wedge of an arch that locks everything together. With the Model 600 Chronograph, it’s engraved on the crown. Why a keystone? A couple of reasons – Pennsylvania is known as the “Keystone State” and Roland was really taken by a set of hands he was given during watchmaking school in Lancaster, Pennsylvania. They were made by the Keystone Watch Company in the late 19th century with a Keystone outline on each hand and RGM has revived the design. The keystone hands on the PS-801-Skeleton are a good example. The 22mm strap is a rustic brown leather with white stitching and a signed pin buckle, and it’s well sized for those with smaller wrists (myself included).

The dial is stripped to the basics, perfectly recreating the aesthetic of a 1960’s military/pilot chronograph. The movement was even modified to removed extraneous elements, but more on that below. What’s here is a matte black base with white dial elements and hands that create a sharp visual contrast, day or night. In lieu of a keystone design, the hour and minute hands have a retro syringe-style with X1 Super-LumiNova. 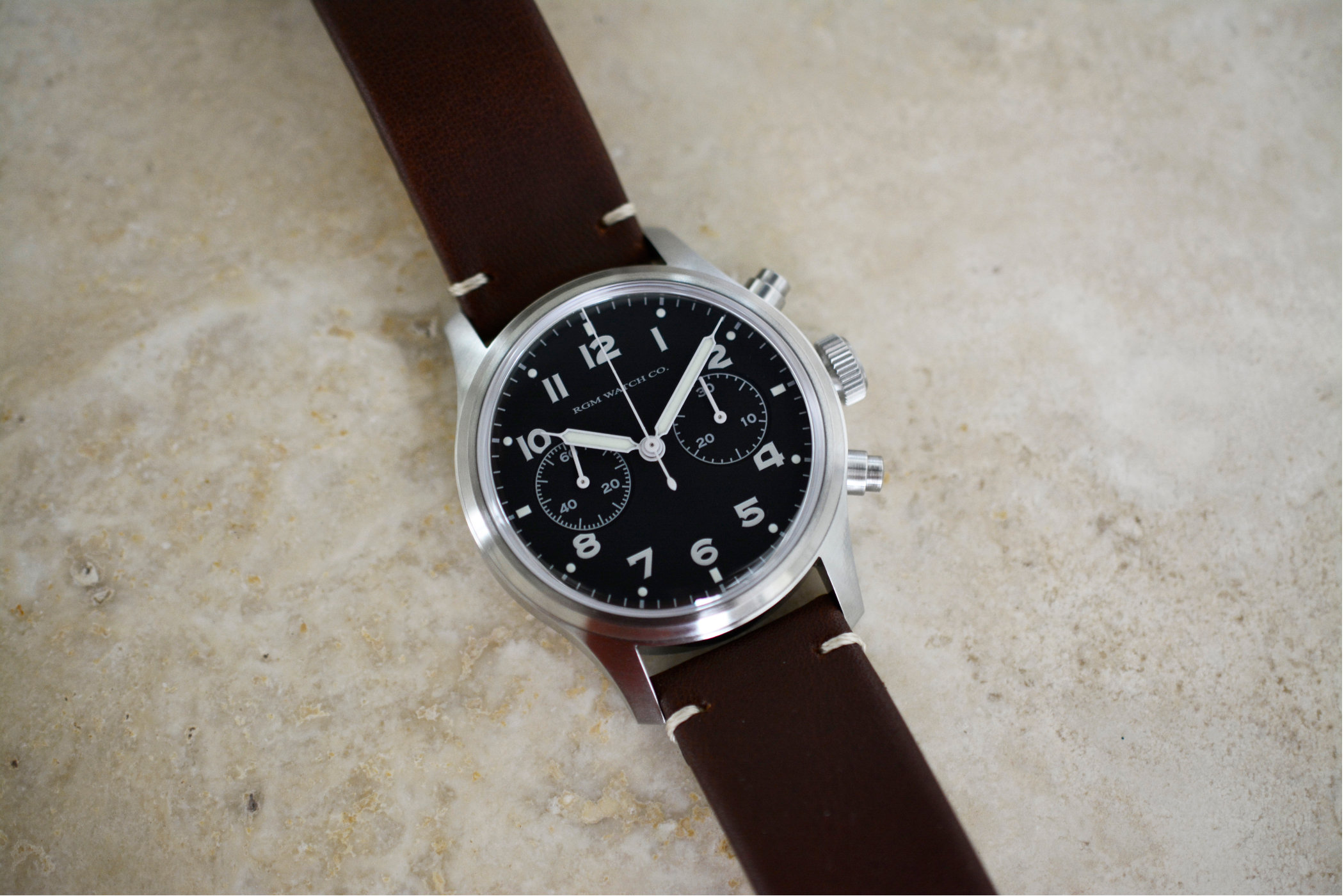 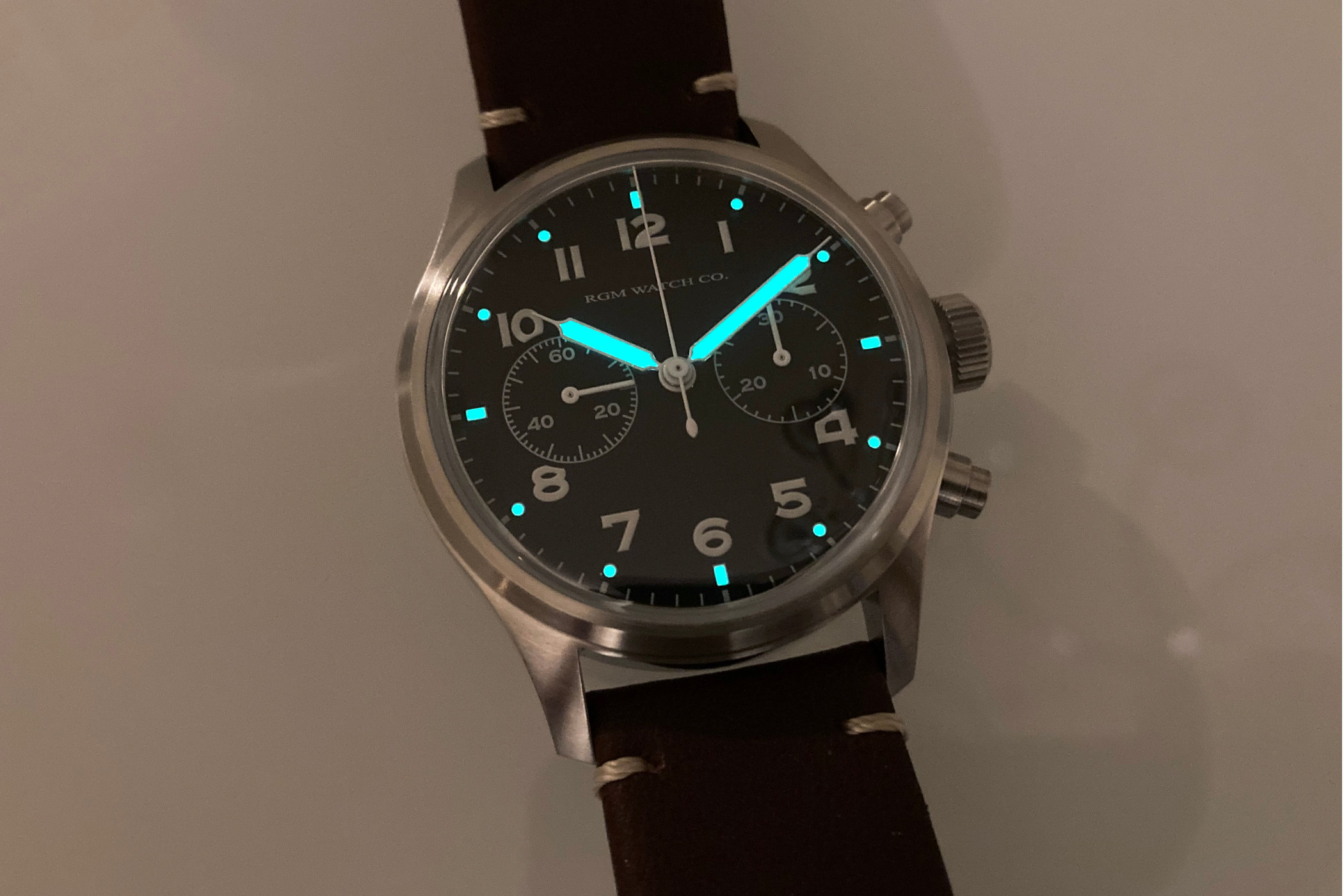 Lume-shot of the RGM Model 600 Chronograph

Oversized white Arabic numerals offer excellent legibility, but aren’t painted with matching Super-LumiNova as only the hour marks inside the minute track have additional lume. Nighttime viewing is still more than adequate. The bicompax setup has a 30-minute counter at 3 o’clock and small seconds at 9 o’clock, with a central chronograph seconds hand. Both sub-dials are also slightly recessed. The only dial text is the company name and the movement’s date has been eliminated. It’s a no-nonsense tool watch and the simplicity really works.

As mentioned earlier, the Model 600 Chronograph has an ETA automatic over an in-house calibre. Specifically, it’s an ETA/Valjoux 7753 cam type chronograph with 27 jewels, 28,800vph (4Hz) and a 48-hour power reserve. The movement comes with three sub-dials and a date at 6 o’clock, but RGM modified it by removing both the date and extra counter, which keeps the dial simple and period correct. It’s also rhodium plated with Côtes de Genève, but concealed behind the case back. I usually prefer exhibition backs, but it wouldn’t be appropriate here.

The caseback of the RGM Model 600 Chronograph 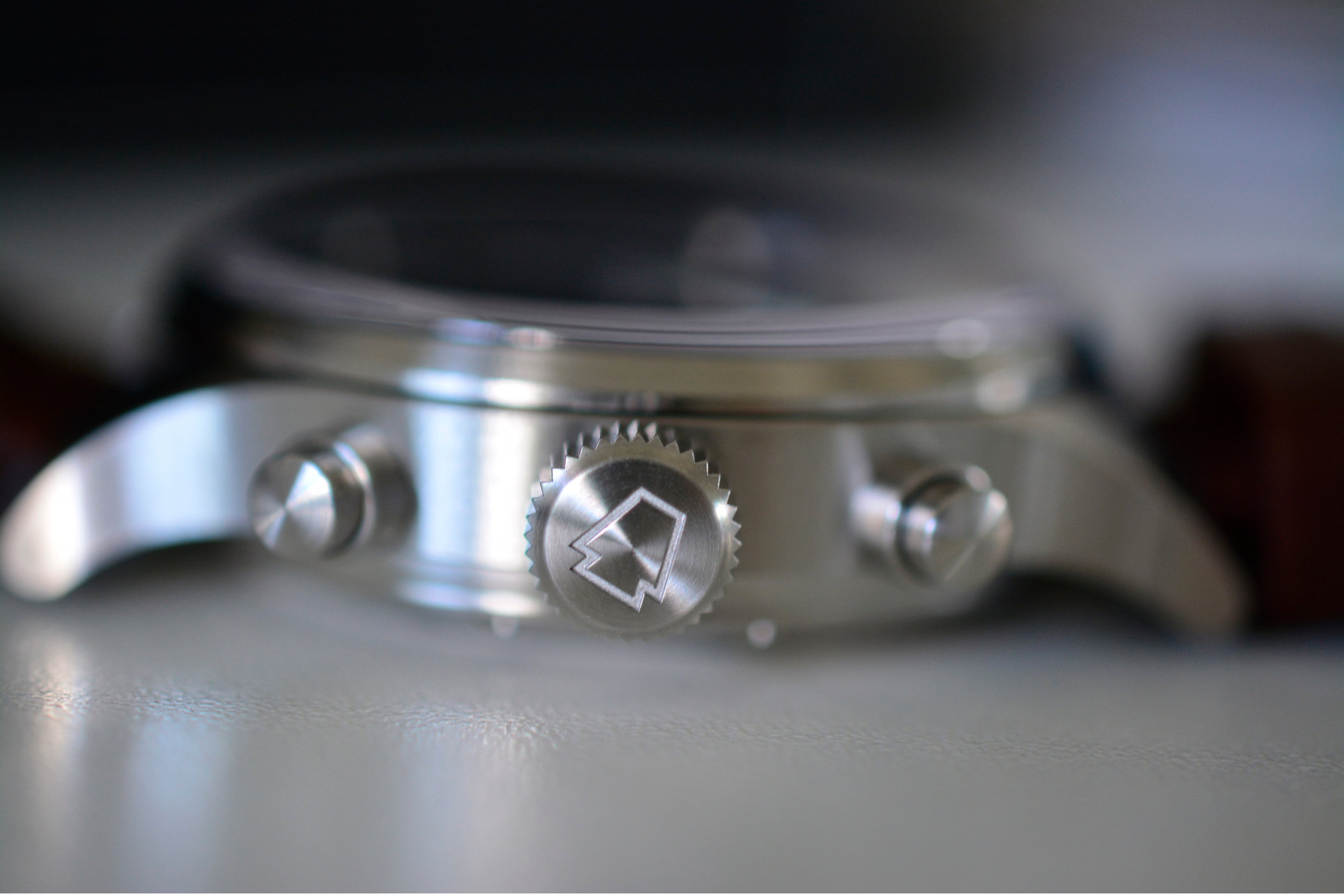 Crown and pushers for the RGM Model 600 Chronograph

I’m a big fan of RGM Watches and we’ve covered many of their in-house models, including the Caliber 20, Pennsylvania Tourbillon and Classic Enamel PS-801-CE. It’s great to see the brand continue to maintain collections with Swiss movements, which allows for more affordable pieces with RGM’s established design elements and quality. The Model 500-GMT is a prime example. As an American, I’m also glad to see true watchmaking make an admittedly slow yet steady resurgence with Roland leading the way. We’re not repeating history with anything approaching mass production, but from a luxury perspective, America is playing on the same field as European and Asian counterparts.

The Model 600 Chronograph isn’t breaking new ground and has rivals from Hamilton, Delma, Tissot and more with watches at half the price. As a small independent brand, however, RGM’s ETA-based collections are limited and still involve extensive handwork and skill. From an enthusiast’s standpoint, that makes a tangible difference.

The RGM Model 600 Chronograph retails for USD 4,250, which falls between a piece like the Hamilton Intra-Matic Chronograph H and Breitling Premier B01 Chronograph 42 “Norton” Edition. It’s not cheap, but reasonably priced for such a watch. The company also allows trade-ins toward purchases, which is a nice perk. For more information and to make a purchase, visit RGM’s website.