Hanhart’s reputation in terms of Military/Pilot chronographs is not to be demonstrated anymore. The German “brand with the red button” (the brand’s signature feature since 1938) is indeed specialized in creating strong, powerful and slightly vintage-inspired chronographs (the Pioneer collection, reminiscent of 1940s pilots and naval officers watches). Yet, there’s another watch in the collection, one that, without losing the roots of the company, looks at future: the bold and aggressive Hanhart Primus. Today, we take a look at the latest version, the Black Ops Pilot, which also happens to be a limited edition (with pre-orders opened). 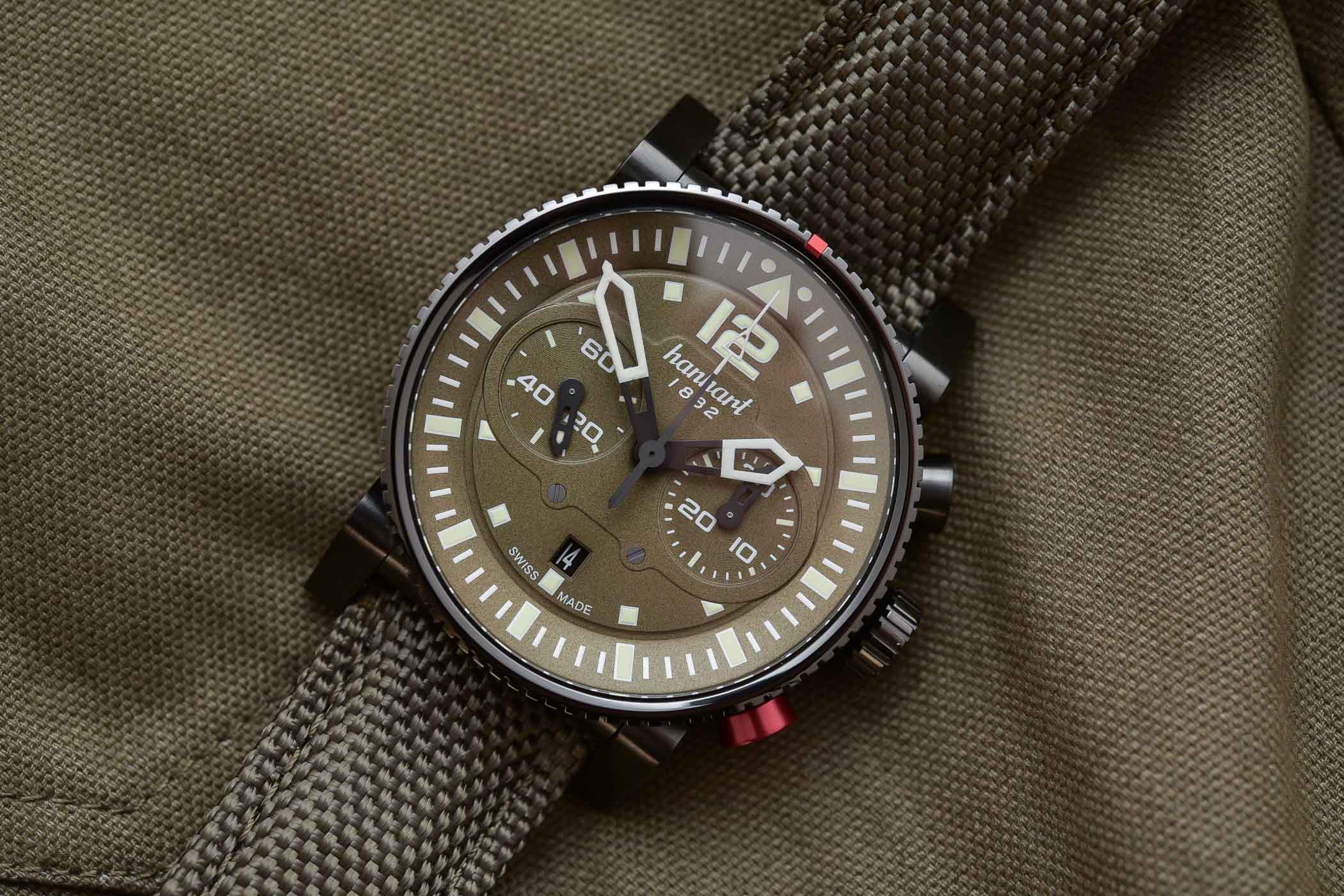 Hanhart’s typical production is centred around Flieger-chronographs, watches that were created prior to WWII, in order to equip pilots. In 1938, the company revealed the single-pusher calibre.40 chronograph, which is the inspiration piece for the iconic Pioneer collection that certainly most here know. These “Luftwaffe Flieger-chronographs” had several traits in common: black dials with Arabic numbers (enhancing high legibility and creating an uncluttered dial), a 30-minute counter, poire squellete hands, asymmetrical pusher buttons and also a rotating bezel. All of this sounds very classical, and in fact, Hanhart has something more in the collection, something that still relies on most of the iconic features of the brand, but in a highly masculine and modern way. And that’s what we’re looking at today; the Hanhart Primus Black Ops Pilot.

In 2009, Hanhart decided to move away from its classic, yet iconic collections – such as this type of Flieger-inspired chronograph – and to present something 21st-century. No clear reference to the past anymore, the Hanhart Primus collection is resolutely modern. What we have here is a deliberately aggressive, masculine, robust filed/military/pilot chronograph. This watch is made for action, there’s no question about. For those who feel the need for something with elegance or distinction, they should look somewhere else. There is a strong bias for action – and the collection isn’t only about pilot, but also racing or diving. Yet, as robust and modern this watch is, it both has quite some coolness, and it doesn’t completely forget its origins – far from that. 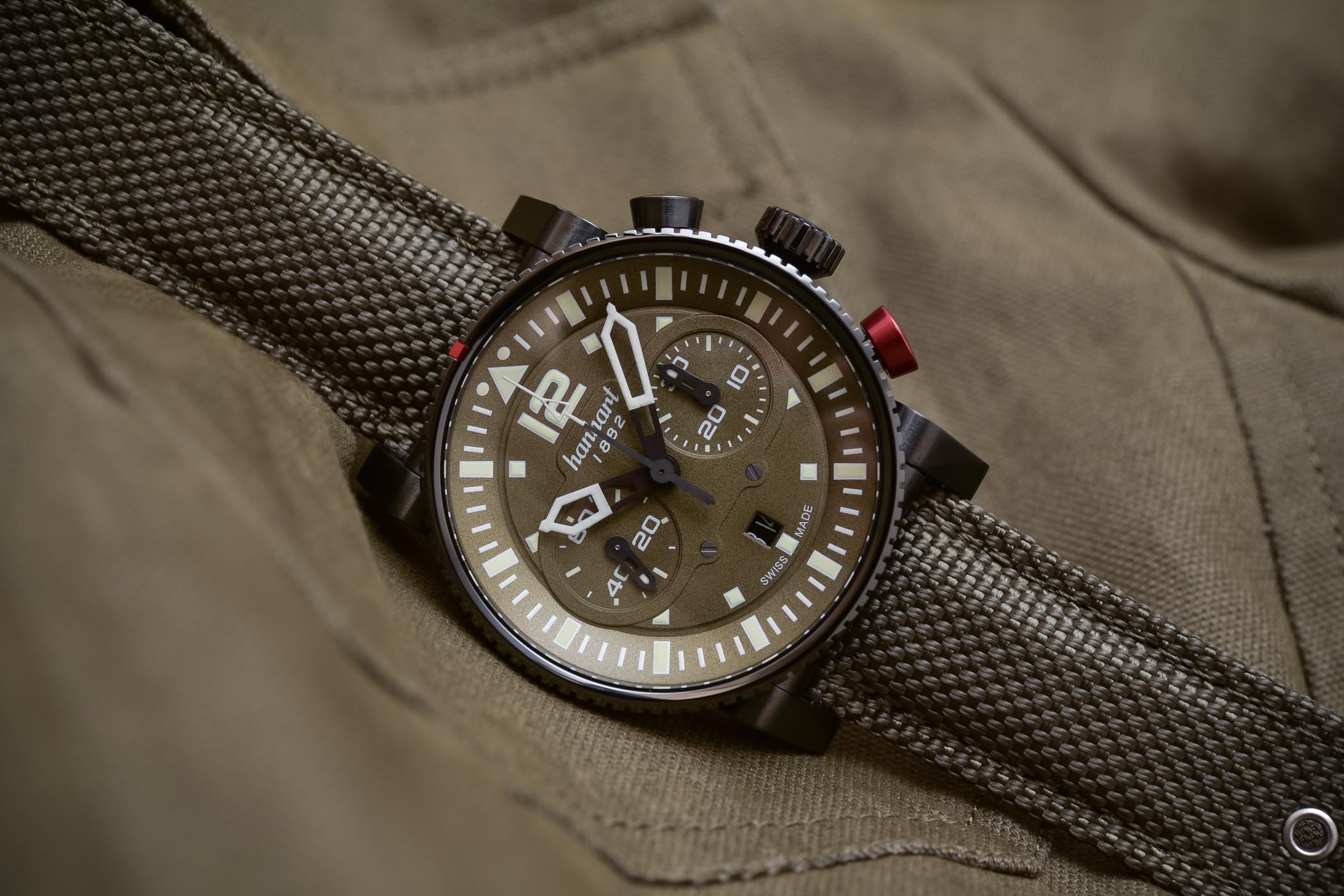 Today, we take a look at the latest iteration in the collection, a limited edition of 82 pieces, with a clear “special forces” style, the Hanhart Primus Black Ops Pilot.

This new limited edition, which is available for pre-order, shares many elements with the already available editions of the Hanhart Primus, on which it adds new colour-codes. Overall, we’re in front of a resolutely massive, angular, sharp watch, with military inspiration and chronograph function. All in all, the focus is made here on resistance, legibility, functionality and – we should not forget that – style. 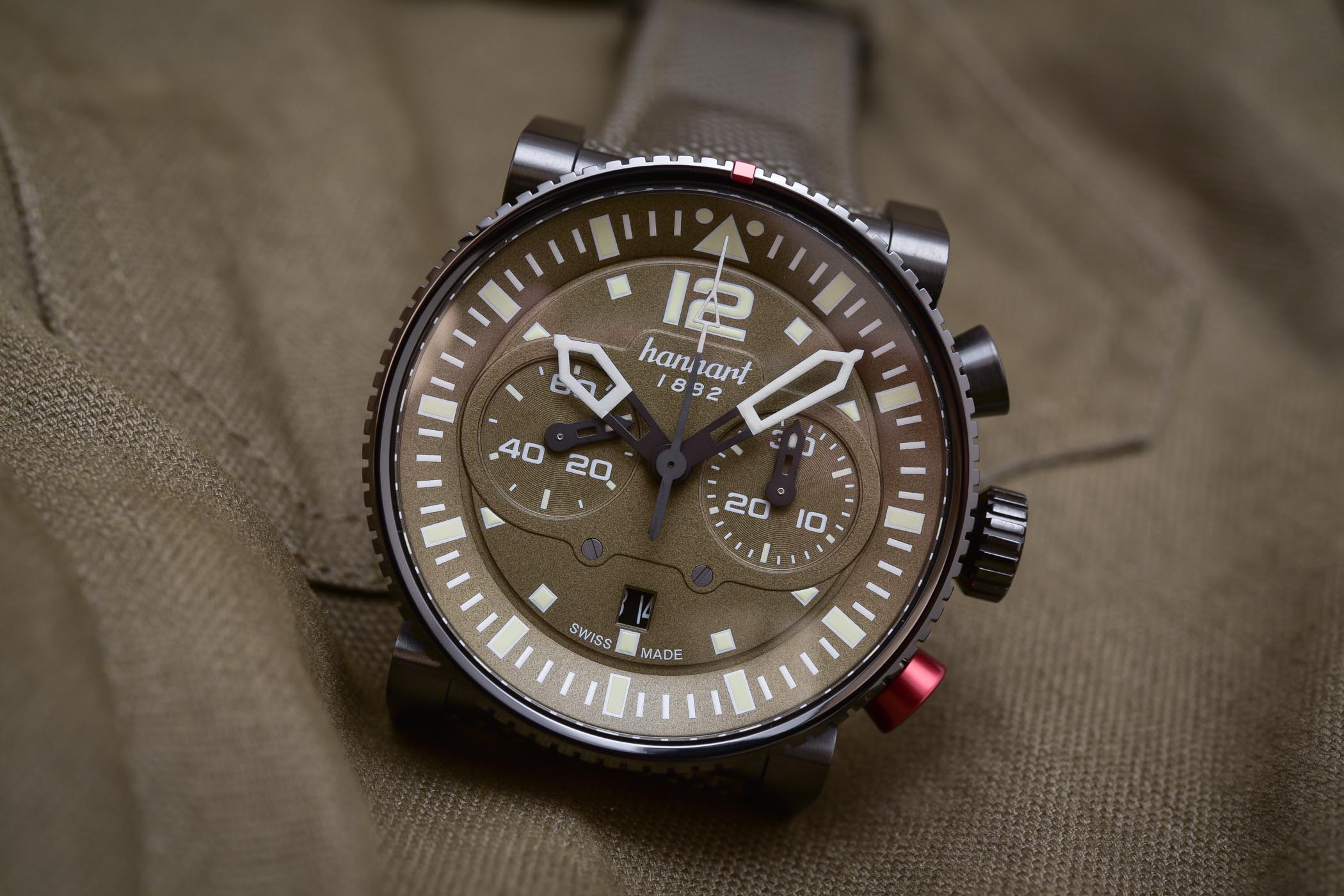 The case of the Hanhart Primus Black Ops Pilot is quite a piece… Made with a lot of steel, showing a quite unusual shape, largely dimensioned and highly protected, it is made in an extremely rugged way and thought to be used in the worst conditions. So, forget about fanciness and distinction. It’s not the goal of this watch.

The case measures 44mm in diameter, by 15mm in height. Quite some respectable proportions, which remain, however “in the standards”. By that, understand that it is large but not larger than many other pilot chronographs you’ll find on the market. Yet, dimensions are not all. Shapes and proportions also play a role here. Being quite angular and with almost no apparent bezel, the watch appears larger than expected. It is a statement on the wrist. All the elements are oversized (with the idea that they can be used with gloves). 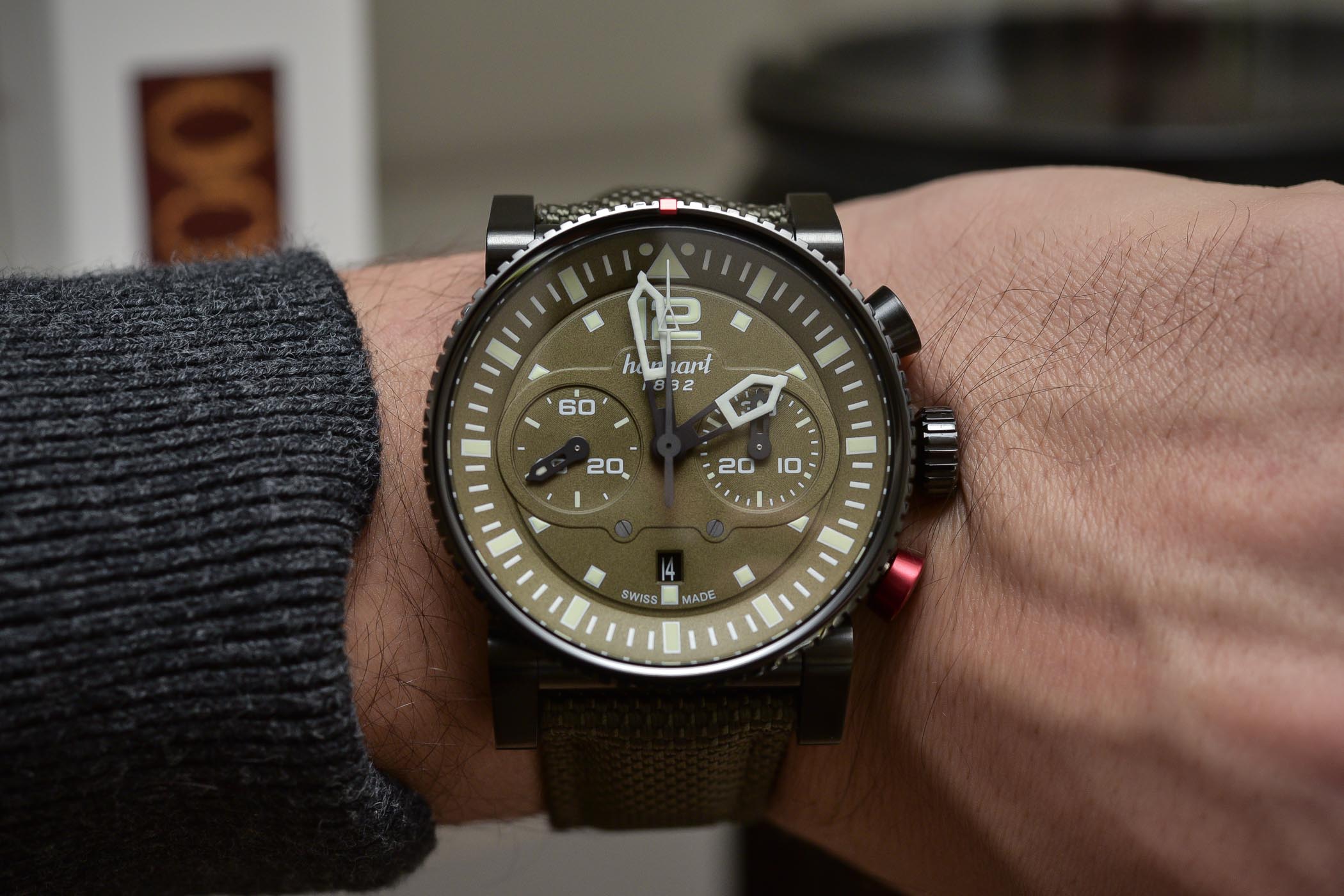 Once on the wrist, even if the presence of the watch is undeniable, comfort hasn’t been forgotten either. Indeed, the lugs are not fixed but articulated in order to bend down and hug the wrist. It means that this watch will easily adapt to most men’s wrists, from 16cm to largely over 20cm. Appreciable. The side of the case reveals this feature, as well as two other things: the notched bezel, something found on vintage pieces of the brand (yet here redesigned with a more angular style) and the red pusher (a signature element of Hanhart watches since 1939).

As said, all the elements are oversized, including the pushers, the crown and the rotating bezel (which features a red indicator to help to make calculations). Once again, ease of use is thus perfect and all the technical elements can be operated without possible mistakes. For this Hanhart Primus Black Ops Pilot, the case has been coated with Black DLC (diamond-like carbon) on brushed steel, with a few polished accents on the sides of the lugs. In terms of style, the character of the watch is undeniable and it feels like something not seen before. Modern and strong, yet when you look at it, you can feel the Hanhart heritage in the design.

As for the overall quality of the watch, let’s be clear: solid as a rock. The watch feels and is heavy, all the elements are rather stiff and nothing feels flimsy of badly adjusted. It is made to last and to survive a tough life. To complement the design, the Hanhart Primus Black Ops Pilot is delivered on a fabric textile strap in military green, closed by a solid folding clasp (also in black-DLC steel). Nice detail: the holes on the strap are circled with metal rings. Once again with the idea of solidity and durability in mind. 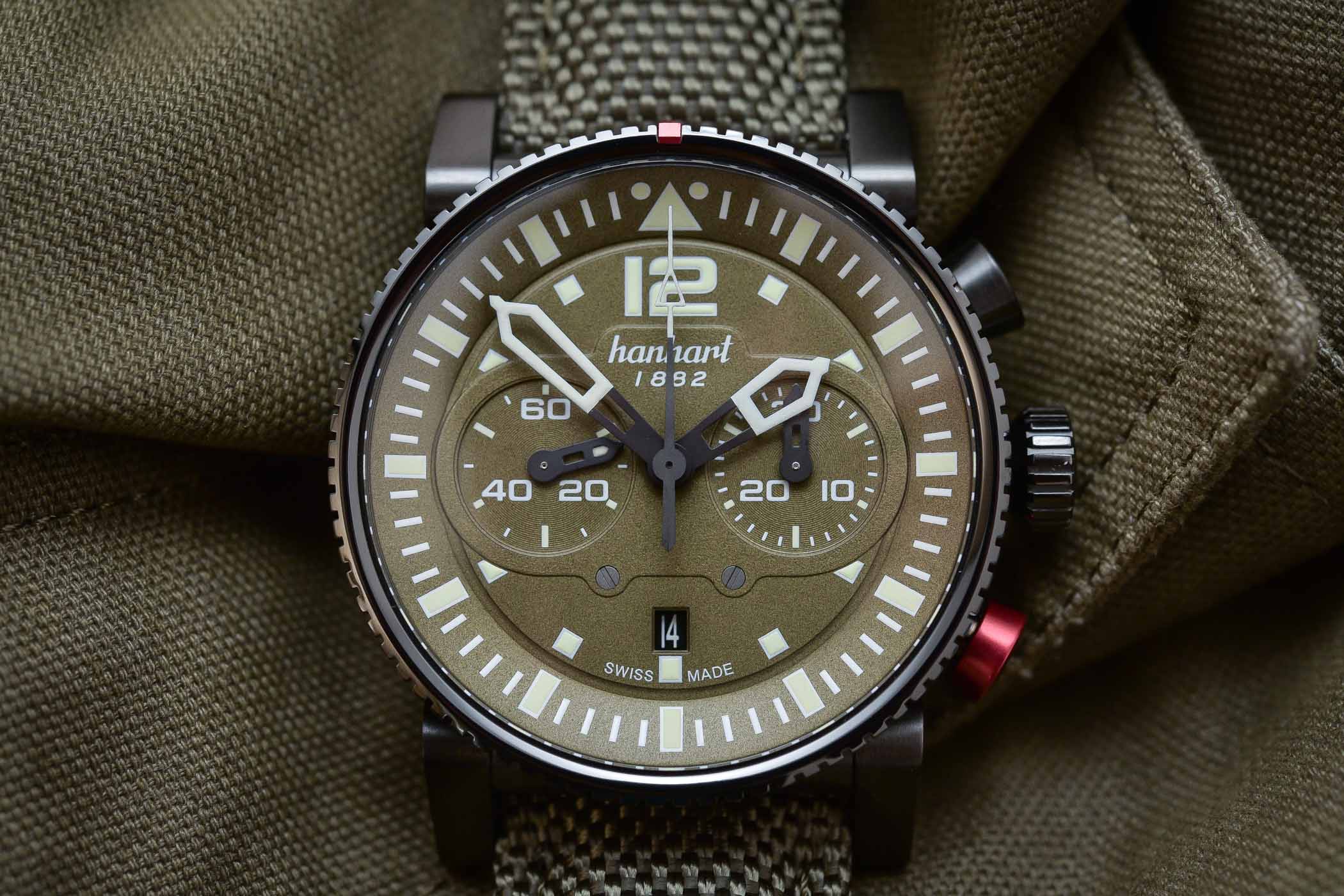 Moving to the dial of the Hanhart Primus Black Ops Pilot, then again the military/field/pilot/special forces inspiration is clear, and modernly designed. This is where the watch might be the less “Hanhart” in fact. Just like the case, the choice was about usability and legibility in all conditions. The military green dial is deeply grained to avoid all reflections, and all the markers are oversized to amplify the indications – and as expected, all are luminous, meaning that night-time legibility is just superb (the kind of watch you don’t put on your night-stand if you want to keep your room dark…) 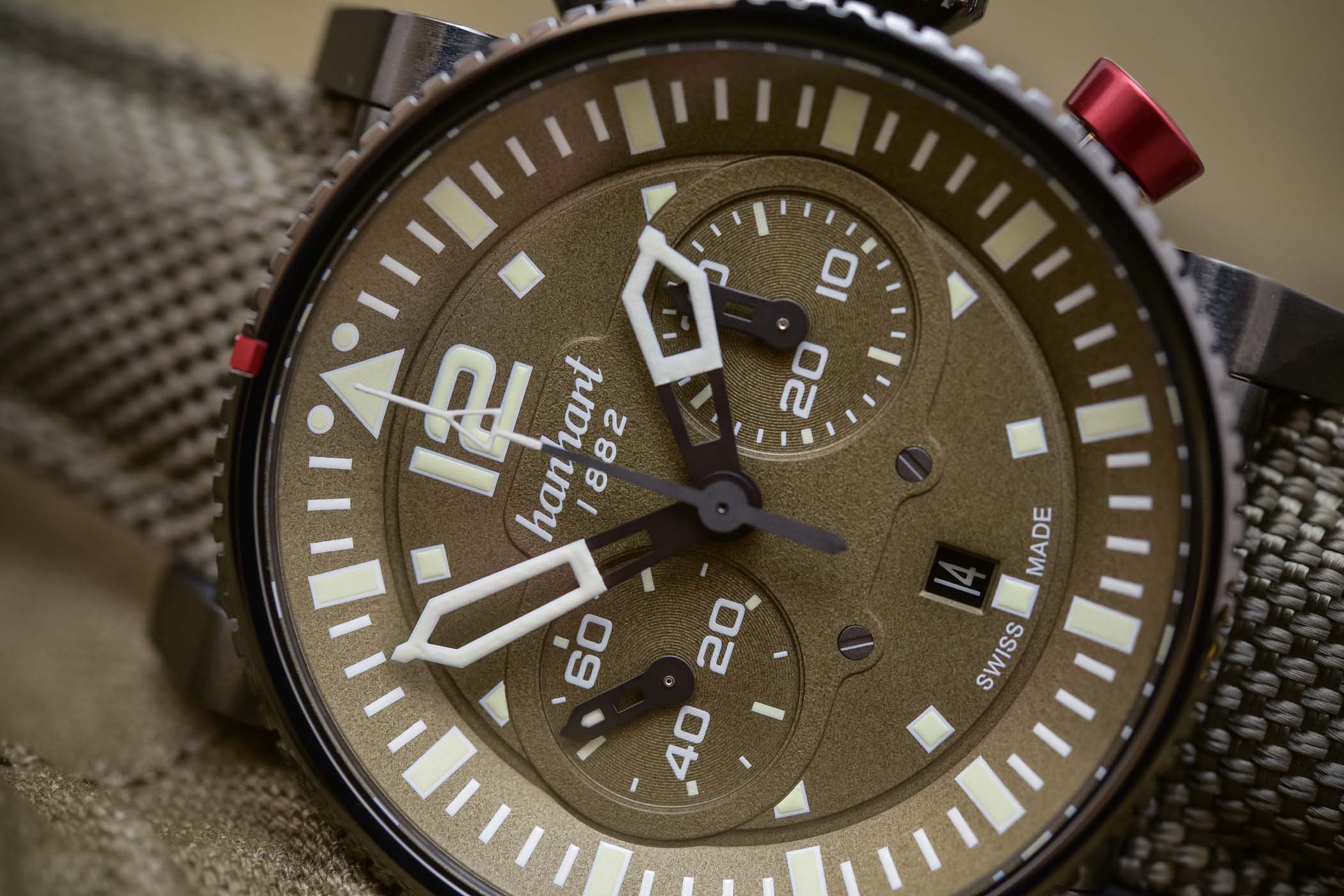 If there’s again no concessions to elegance, and if the only consideration was ease of use, the result remains quite enjoyable. Of course, this dial is not going to “fly under the radar”, like the rest of the watch. But once accepted the fact that this watch is a field/action tool, the overall layout makes sense. Whether you focus on the time or the chronograph indications (a bi-compax display with a small second at 9 and a 30-minute counter at 3), it will be hard to have any hesitation on the indications. All come straight on your face and provide instant legibility. Utilitarian and tool-ish, but after all, not unpleasant at all. Just like the case, the dial feels well executed, with net and precise adjustments and printings (might be that German sense for quality…) One question remain (as often): the presence of the date… Some like, some don’t. Here, I’d say that it balances the dial, but a large 6 numeral would have been good too. To each his own. 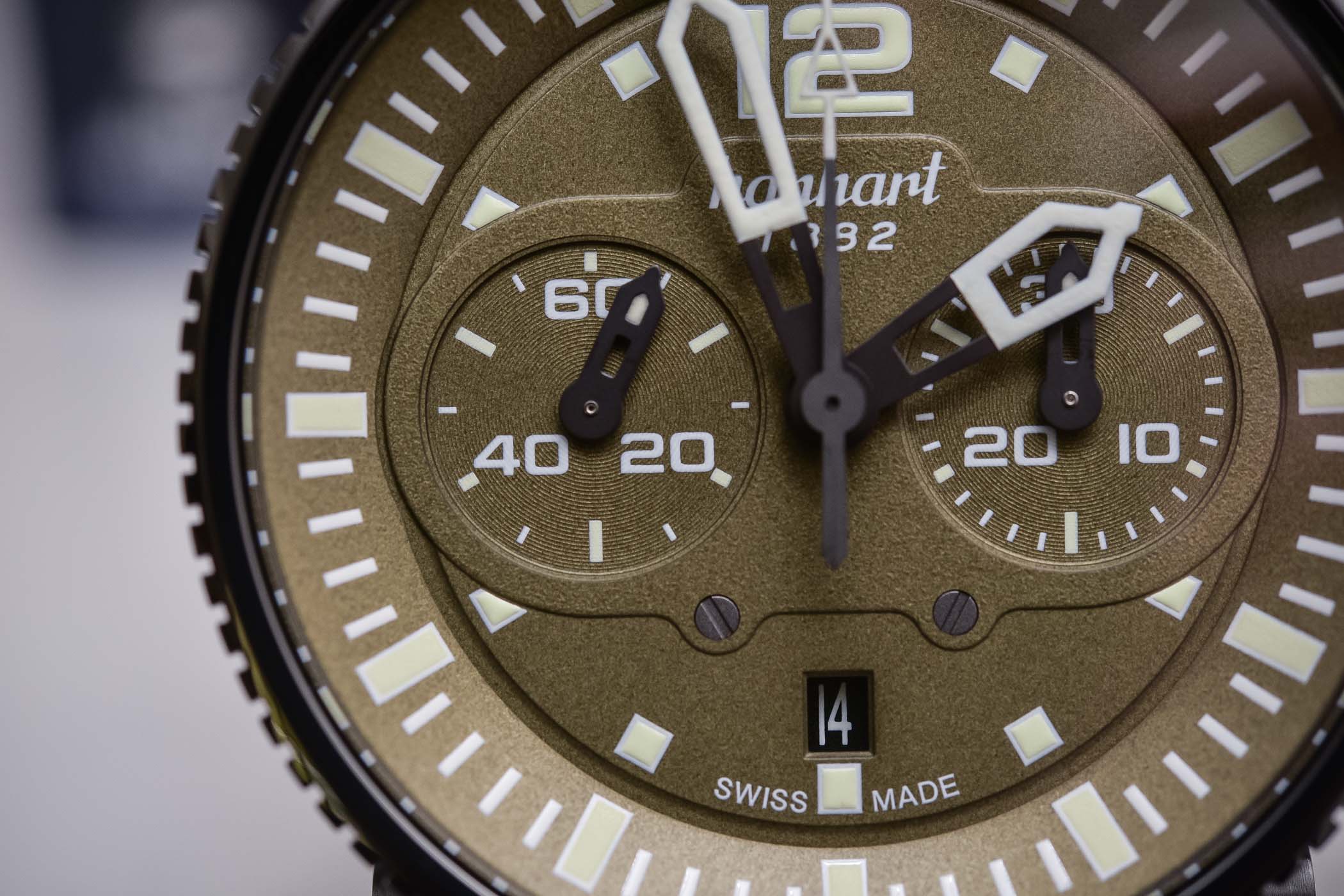 Powering the Hanhart Primus Black Ops Pilot is a movement as robust and utilitarian as the rest of the watch. The HAN3809 is based on the proven architecture of the Valjoux 7750, here slightly modified by La Joux-Perret (a respectable movement constructor). The main difference comes from the display, modified from the typical 6-9-12 to a more balanced 2-register layout (3 and 9) style, with the sub-dials being slightly moved away from the axis of the hands, thus more adapted to the size of the watch. For the rest, the specifications are equal to a standard 7750 – 4Hz frequency, 42h power reserve, chronograph actuated by a cam. 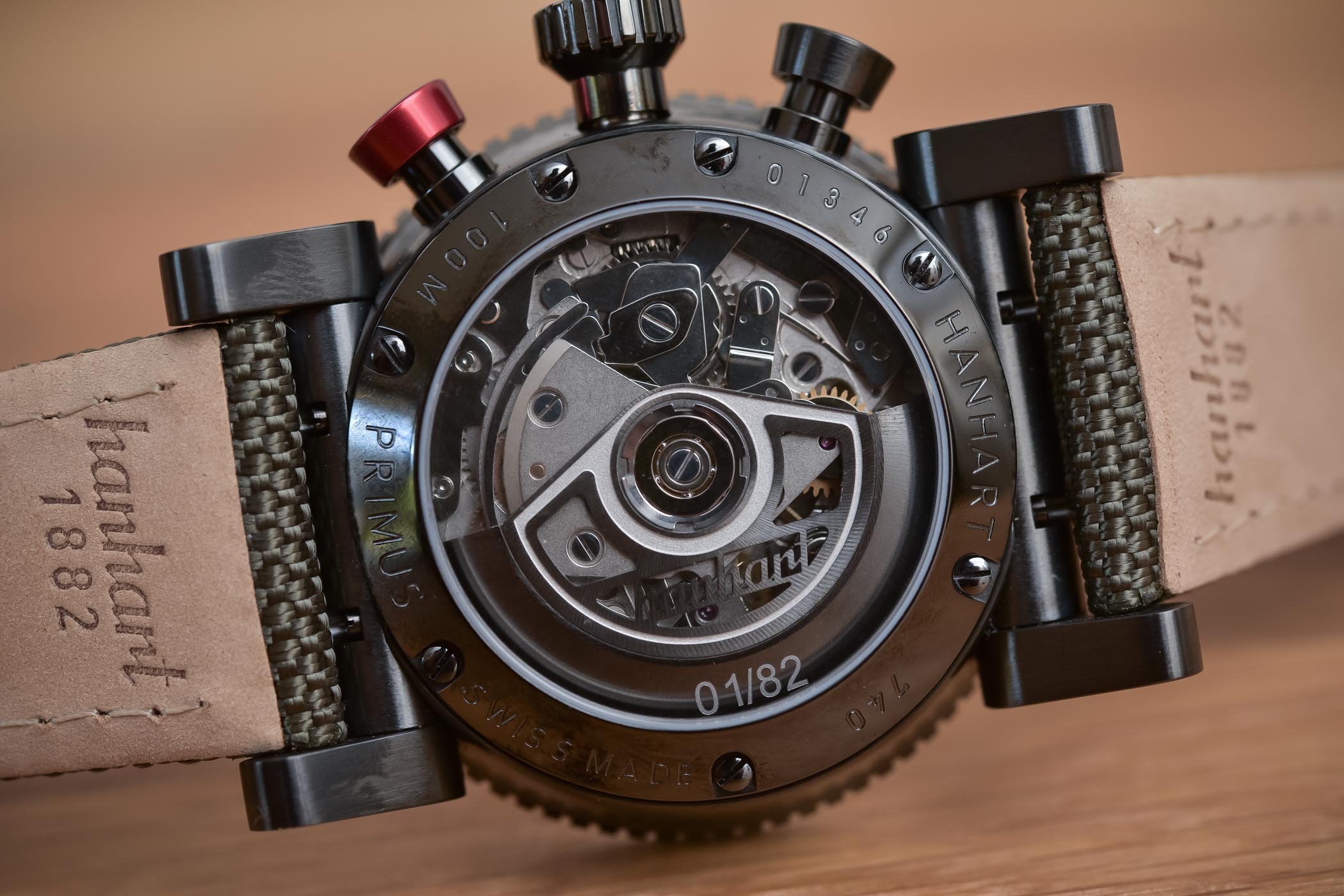 Visible through the sapphire caseback, it shows an industrial look, with sandblasted bridges and a specific openworked rotor in black. Again, nothing fancy but a movement that will operate just like it should and will most likely prove reliable and accurate (the 7750 architecture has been tested for over 4 decades now), with an efficient winding capacity. 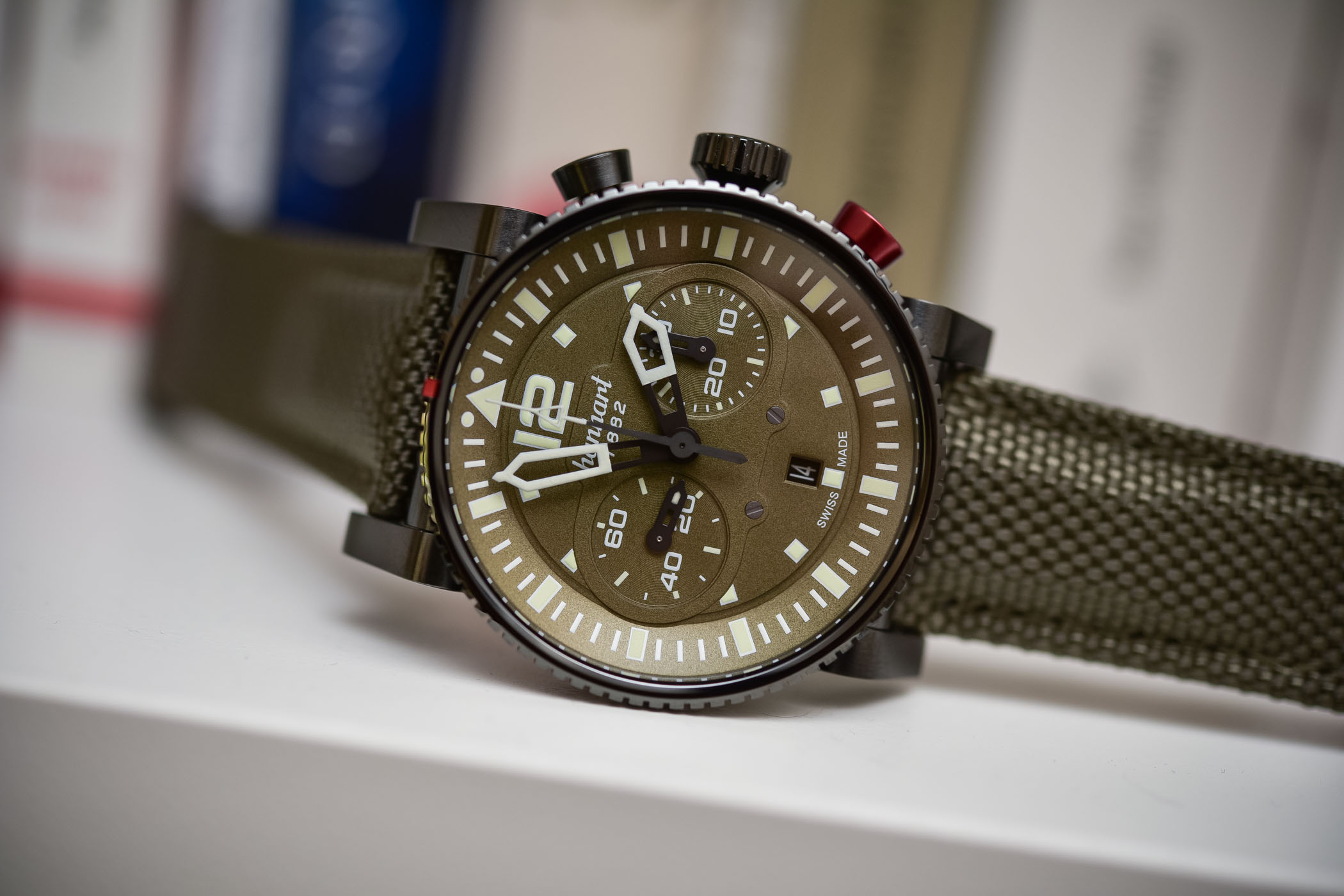 Overall, the Hanhart Primus Black Ops Pilot provides with what expected by its looks. It is a solid, robust, bold and “made to survive” tool watch. Its design is a statement, with no concessions discretion or elegance – and clearly, this is not what you should expect from such a watch – but it looks like no other watch on the market. On the other hand, we’ve been pleased by this deliberate aggressivity of the design, by the nicely executed and dosed references to the Hanhart heritage and by the impressive overall quality. Considering this watch is priced at EUR 2,990, we’ve been pleasantly surprised, and that includes some small details such as the strap and the articulated lugs. A watch to be assumed for sure, but a qualitative option.

This Hanhart Primus Black Ops Pilot is limited to 82 pieces and pre-orders can be made on this page: blackops.hanhart.com.