When a model is discontinued and replaced with a new reference at Patek Philippe, two things happen: the old model tends to become even juicier bait for collectors and the newcomer is subjected to intense scrutiny. In March 2019, Patek Philippe introduced the ref.5172G chronograph to replace the longstanding and much-loved ref. 5170. Fitted with the same in-house manual-winding calibre CH 29-535 PS as its predecessor, the latest member of Patek’s chronograph dynasty comes in a white gold case with a de rigueur blue dial and a pronounced vintage temperament. Larger, bolder, less classic and more casual than the 5170, the 5172G is one of the contenders in our next battle of chronographs.

Editor’s note: this review of the Patek Philippe Chronograph 5172G is part of a series of three articles where we will compare two of the most desirable high-end, hand-wound chronographs currently on the market. Two watches with the same concept, but two different flavours. The third article, which will be published after our two separate reviews, will pit them side-by-side.

Most of you are familiar with the recent story of Patek’s hand-wound chronographs (without additional complications), but a quick recap might be helpful to understand the context and significance of the 5172. Launched in 2010 and for a span of almost nine years, the 5170 was the chronograph reference at Patek.

Fitted with Patek’s very own in-house manual-winding chronograph calibre CH 29-535 PS – designed to replace the 5070 and its Nouvelle Lemania-based movement –  ref. 5170 appeared in yellow gold, white gold, rose gold and in March 2017, a fancy platinum version with diamond hour markers. The platinum version was, as many had predicted, the swansong of the 5170, and sure enough, during Baselworld 2019, Patek unveiled its successor, ref. 5172G.

Back in its day, we described the 5170 as a ‘back to basics’ dressy chronograph, with a classic, elegant 39mm Calatrava case, a restrained touch of vintage and the incorporation of Patek’s brand new in-house manual-winding chronograph movement; a very big deal indeed. This latest member of the chronograph dynasty boasts the same hand-wound chronograph calibre but is a different creature leaning heavily on the vintage card and appropriating design features from other models in Patek’s extensive repertoire.

As you can see, the 5172 has borrowed design features from both the historical ref. 1463 chronograph and the more recent 2017 perpetual calendar ref. 5320. Since its launch in 1940, ref. 1463 is not only a hot commodity among collectors, but it was also the only chronograph model by Patek Philippe with a water-resistant case and round chronograph pushers. The prominent features that have been appropriated from ref. 1463 are the mushroom chronograph pushers with their guilloché decoration on the tips.

The other obvious source of inspiration comes from the 2017 ref. 5320, a perpetual calendar that made no qualms about embracing vintage design codes. The case of the 5172G has adopted the elegant stepped lugs (in turn borrowed from ref. 2405 of the 1940s) while the dial features the same luminous Arabic numerals and the syringe hands of the perpetual calendar. 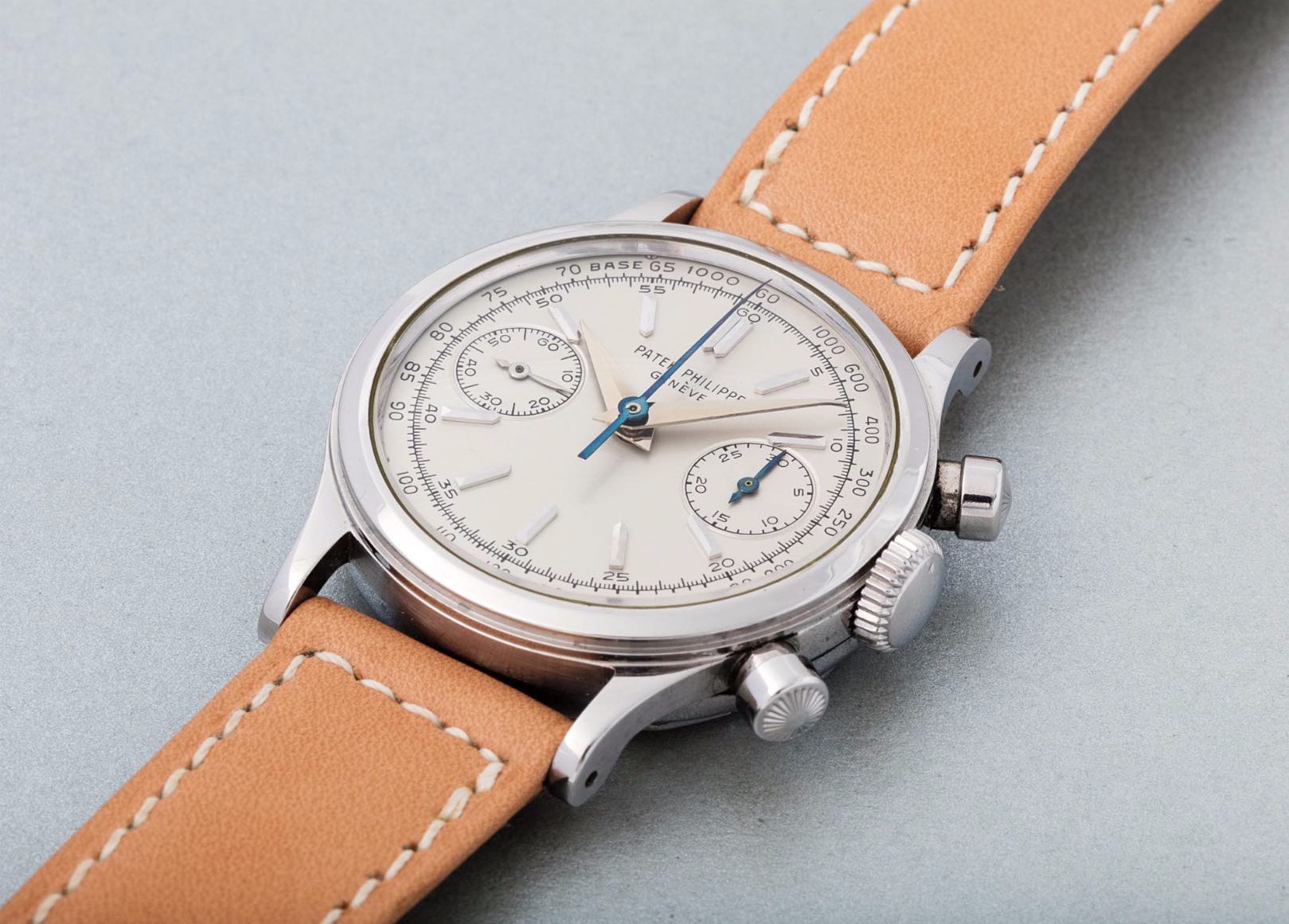 The 41mm white gold case of Ref. 5172G is larger than its predecessor, which combined with the prominent piston pushers confer it a sportier, more casual look. Although they are smaller than the rectangular pushers on the 5170 and poke out beyond the level of the crown, the pushers glide in and out like silk. The case is beautifully executed with surprising flourishes that might seem at odds with a chronograph. The smooth stepped surface of the bezel is met by four beautiful three-tiered lugs, details that recreate the sleek, streamlined ethos of Art Deco styling. Handling the watch is a rare treat. The heft of the white gold and the silky-smooth operation of the pushers give it the gravitas of a Patek.

With the saturation of blue dials currently awash on the market, I have to admit that this particular tone of navy blue, with its slightly grained texture, is extremely elegant. The combination of polished white gold, navy blue and white markings is foolproof and works perfectly, just like a sharp, well-cut navy blue suit with an impeccable crisp white shirt. 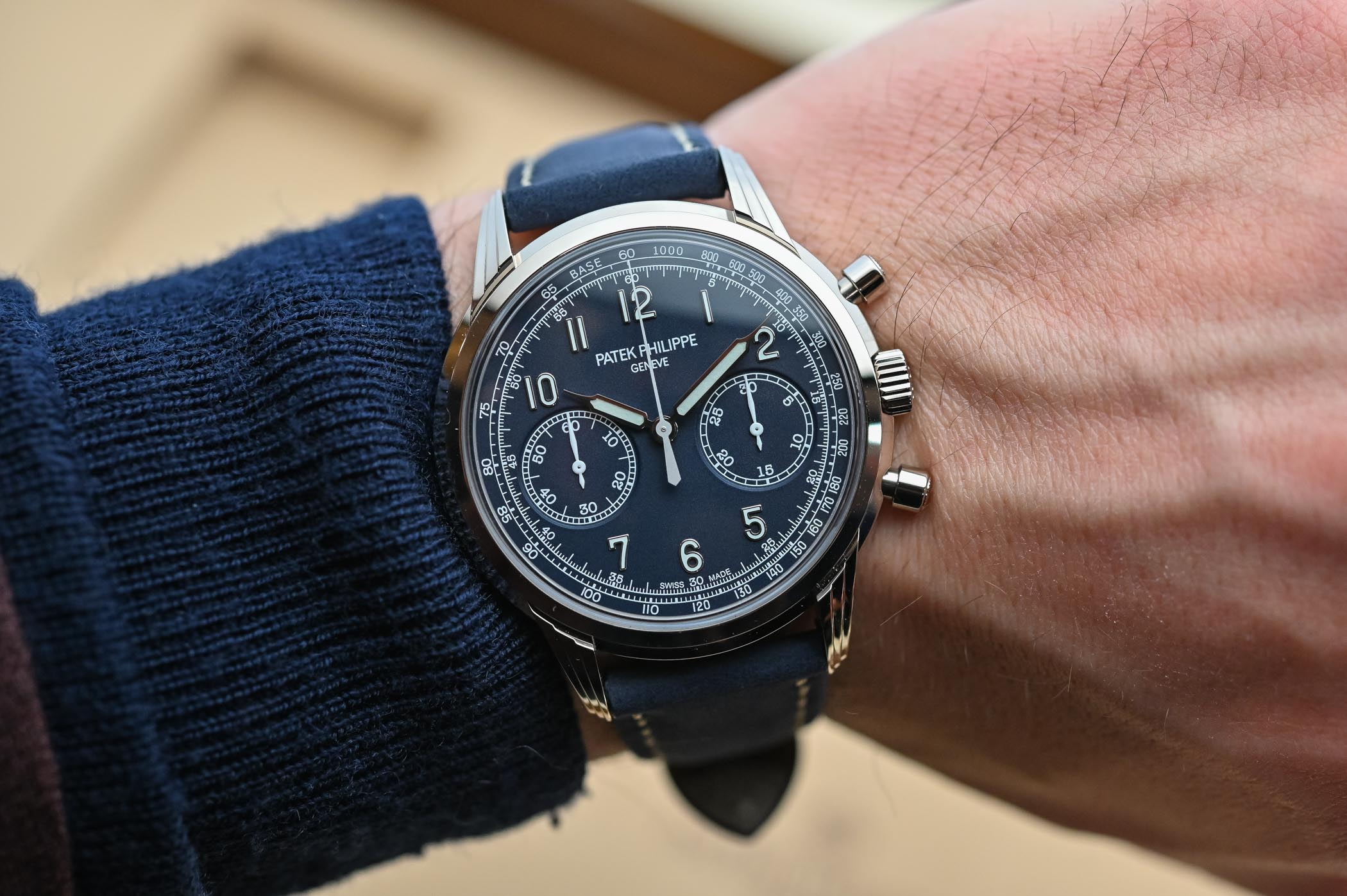 The white gold applied Arabic numerals and the syringe-style hands are treated with plenty of lume (identical to those on ref. 5230G). The two sub-dials for the small seconds and the instantaneous 30-minute counter are framed by a white railway-track scale and are positioned slightly below the equator of the dial. As Brice points out in his in-depth coverage of the 5172G, this positioning is intentional to prevent counterfeits. All the markings, from the peripheral tachymetre scale to the inscriptions on the dial are white, a sensible choice in the pursuit of legibility. As a final vintage touch, a box-shaped sapphire crystal crowns the dial offering interesting distortions when viewed from the side. Two subtle but distinctive details of the 5172G: the triple-stepped lugs and the guilloche chronograph pushers

Five years in the making and covered by six patents, manual-winding calibre CH 29-535 PS was a proud milestone for the brand replacing the Nouvelle Lemania-based calibre CH 27-70 that PP had been using for its chronographs since the 1980s. Entirely conceived and produced in-house, calibre CH 29-535 PS  made its debut in 2009 inside a women’s watch (Ladies’ First Chronograph. ref. 7071) and a year later in 2010, on board the men’s ref. 5170J.

The design of the movement is based on traditional chronograph architecture with a column-wheel, horizontal clutch and manual-winding. Despite the ultra-classic architecture, calibre CH 29-535 PS is a modern, technically advanced movement with six patented innovations including optimised tooth profiles, improved adjustment of gear penetration and self-adjusting reset hammers.  Beating at a modern 4Hz frequency, the watch has a hearty power reserve of 65 hours when the chronograph is disengaged. Finished with great care, in keeping with the mandates of the Patek Philippe seal, you can see the hand-chamfered and polished edges of the bridge with Côtes de Genève ornamentation, the circular graining, the gold chatons, the perfectly finished levers and the distinctive cap covering the column wheel. 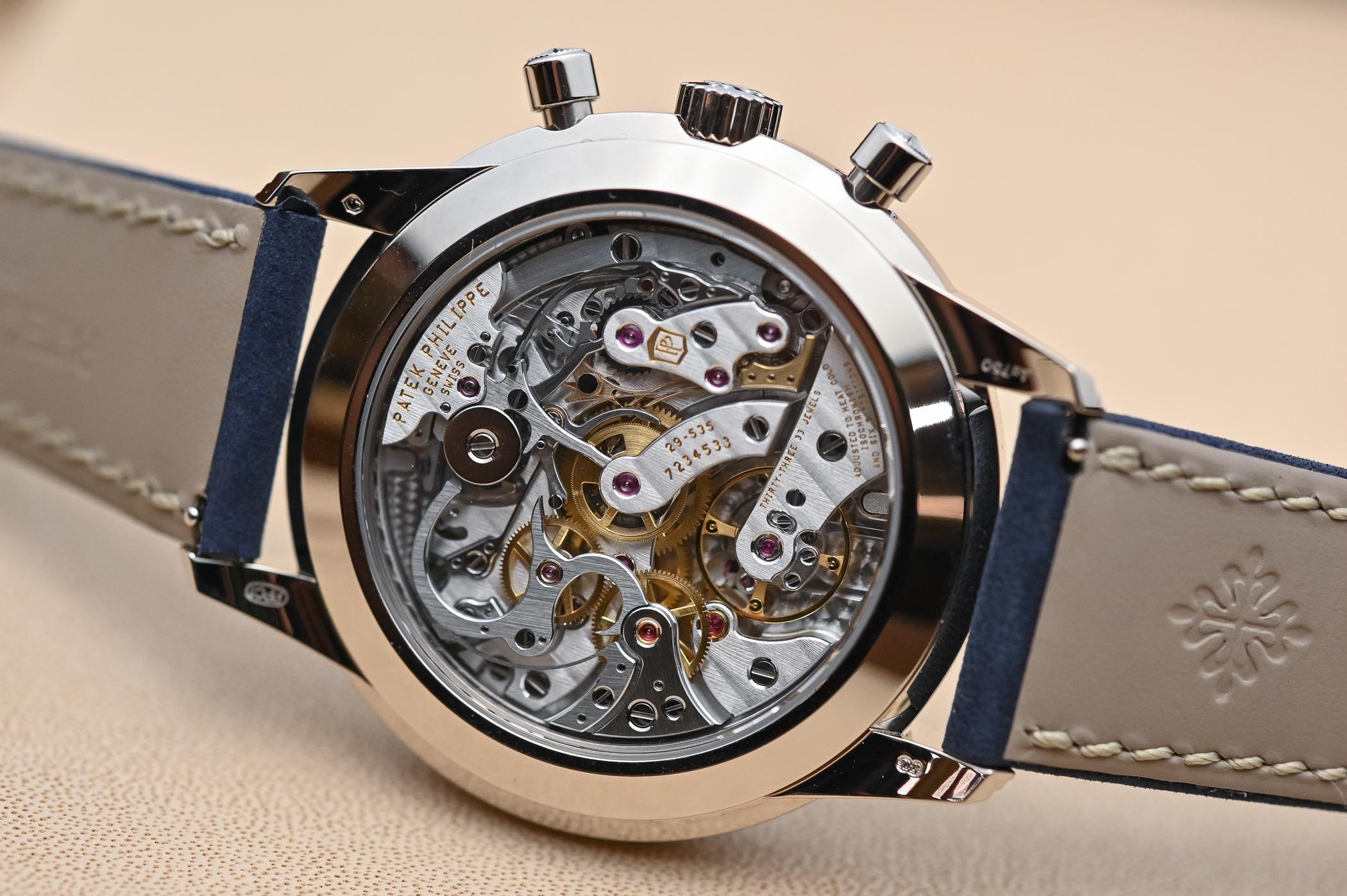 The 5172G in white gold comes on a navy blue calfskin strap with white stitching and a white gold foldover clasp. Unlike the fancier alligator straps fitted on the 5170, the calfskin strap reasserts the more casual, laid-back spirit of the 5172 perfectly.