This SBGW231, which belongs to Grand Seiko’s Elegance Collection, might not have the most seductive name, but this steel dress watch with classic aesthetics and sizing, impeccable hand-polished features, a superlative mechanical movement, and an attractive price is a rock-solid candidate for our upcoming battle of elegant time-only watches. It might not catch your eye in pictures and come across as disarmingly simple, but believe us this watch is absolutely stunning in the metal and makes up for its sobriety with refined details that underline the Japanese quest for perfection. 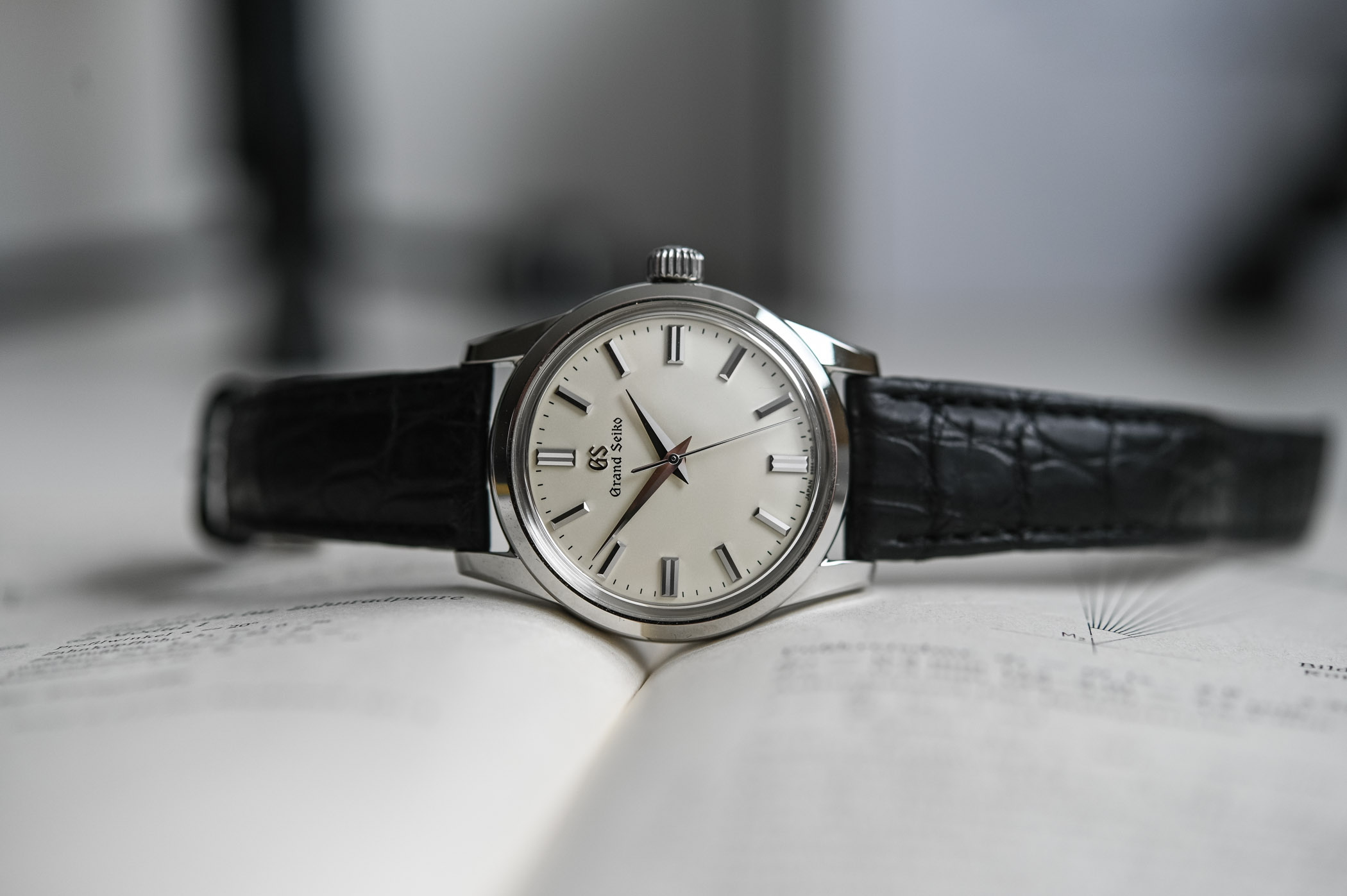 Editor’s note: this review of the Grand Seiko SBGW231 is part two of a series of three articles where we will compare two elegant time-only watches currently on the market. Two watches with the same concept, but two different flavours. The third article, which will be published after our two separate reviews, will pit them side-by-side.

The meteoric rise of Grand Seiko outside Japan

With its mix of cutting-edge technology and time-honoured Japanese craftsmanship, Grand Seiko is conquering the Western watchmaking scene and gaining adepts by the second. From relative obscurity in the West, since 2010 Grand Seiko has been available internationally and is fast becoming a presence for the Swiss to contend with. One of the main hurdles for Grand Seiko was to differentiate itself from the general image many had of Seiko as a purveyor of cheap quartz watches.

The goal for Grand Seiko in the US and Europe is to become one of the top five luxury watch brands with products positioned in the USD 5,000 – 10,000 price segment. And judging from the positive reactions around the watch community, it’s going to happen very fast. In 2014, for example, a Grand Seiko Hi-Beat 36,000 GMT won the GPHG Petite Aiguille prize for a watch retailing for under CHF 8,000. 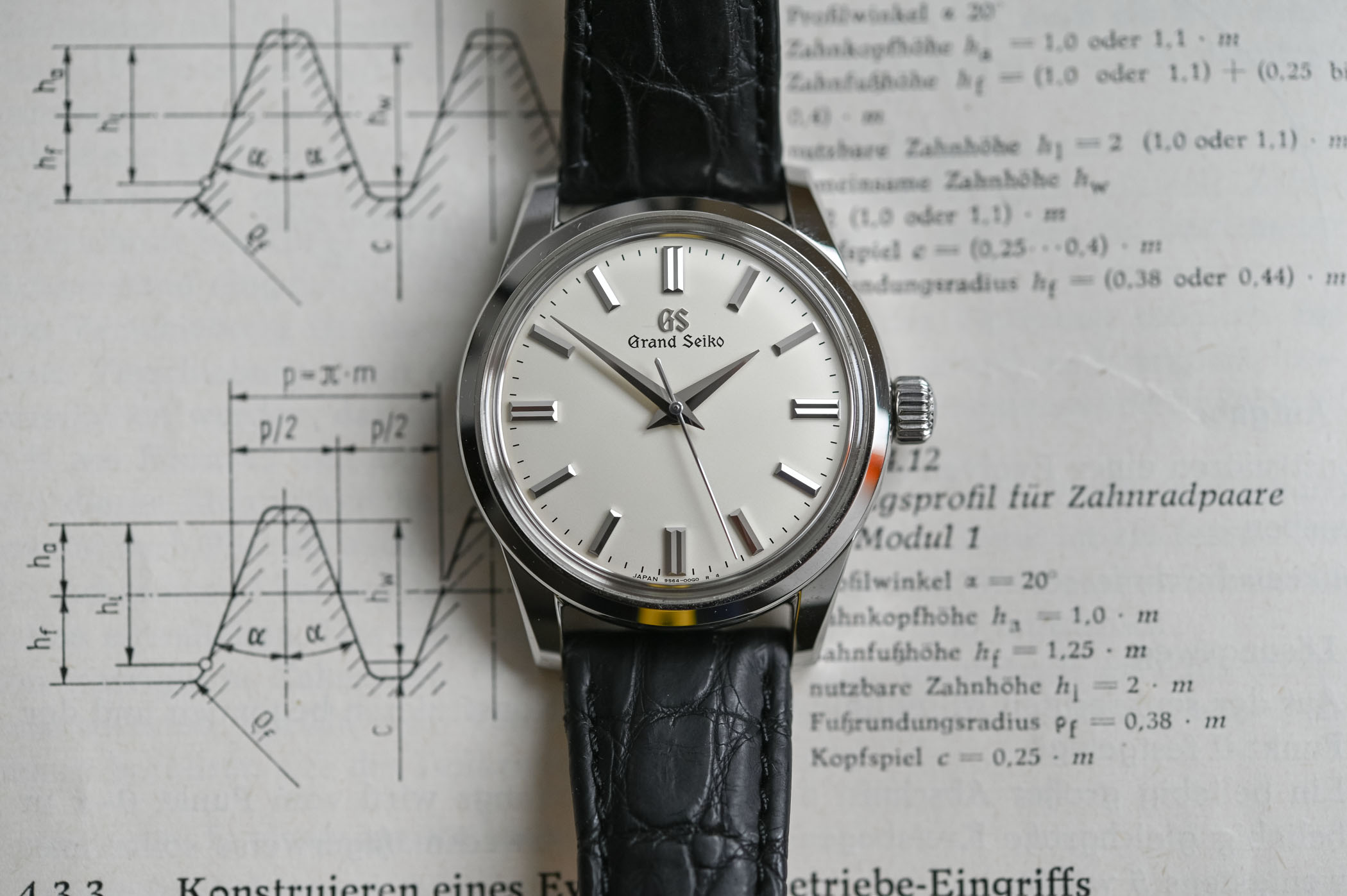 The Japanese Pursuit of Perfection

Since its birth in 1960, Grand Seiko was Seiko’s vision of the “ideal watch”, a luxury line that was to be as beautiful as it was durable, legible and precise. Designed to express a unique Japanese idea of beauty, strict rules regarding proportions, finishes and angles governed and still govern the design tenets of the Grand Seiko today. These have to do with a very Japanese obsession with light and shadow. Shadow in Japanese aesthetics is as important as light and the play of light and shadow on a perfectly polished surface is the essence of harmony, the yin and yang if you like of aesthetics.

Seiko uses the example of traditional Japanese Shoji sliding doors to illustrate this concept of interplay of light and shadow. The nine core style elements of the Grand Seiko Style were established by designer Taro Tanaka in 1967 with the 44GS watch and include everything from mandates for the case construction and finish to precise details on how the elements on the dial should be faceted and polished. (You can read about the 2017 reissue of the 1960 Grand Seiko in this article.) 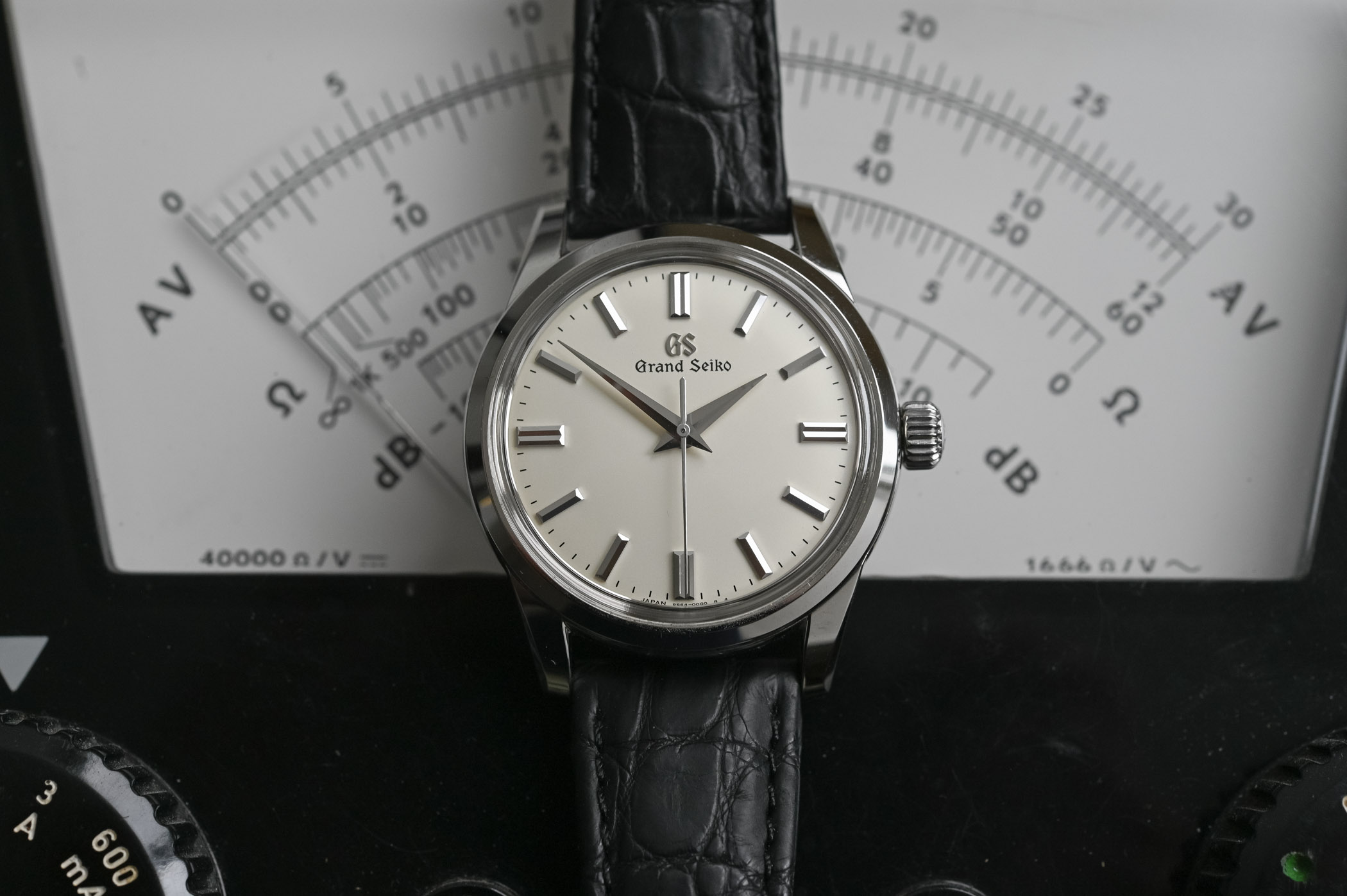 A lot of watch purists are going to rejoice when they discover the dimensions of the SBGW231: 37.3mm in diameter and 11.6mm in thickness. It’s certainly not a thin watch, and some might argue that its thickness disqualifies it as a dress watch, but the case diameter and height conspire to create an extremely well-proportioned watch. There is nothing revolutionary about the round case, but wait until you discover the way the bezel and other polished surfaces catch the light… 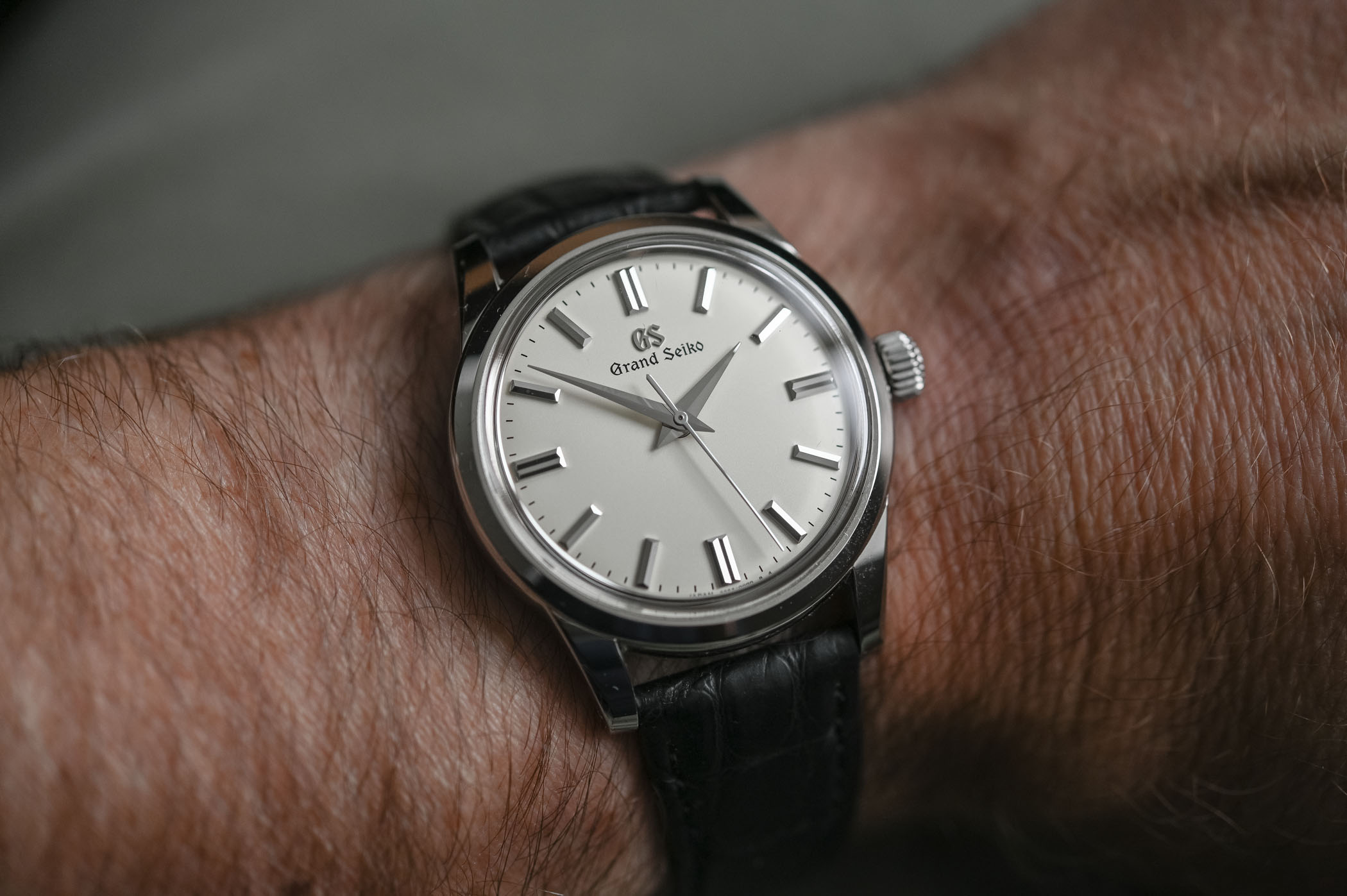 One of the nine mandates for the Grand Seiko established by Taro Tanaka in 1967 was that flat surfaces on the case (and elsewhere) be polished to a mirror finish (sparkle of quality) using a method known as Zaratsu polishing. Like Japanese katana swords, the polishing was to maximise the interaction of light on the flat surface to create sharp, crisp edges and a mirror-like surface with no distortions. The curious fact is that Zaratsu is not a Japanese word or technique at all. It is the Japanese pronunciation of the German word Sallaz, the name of the German manufacturer which appeared on polishing machines acquired by Seiko in the 1950s. Don’t be fooled into thinking that because a machine is involved the process is any less demanding; Zaratsu polishing requires three years of training before a craftsman can practice the technique. 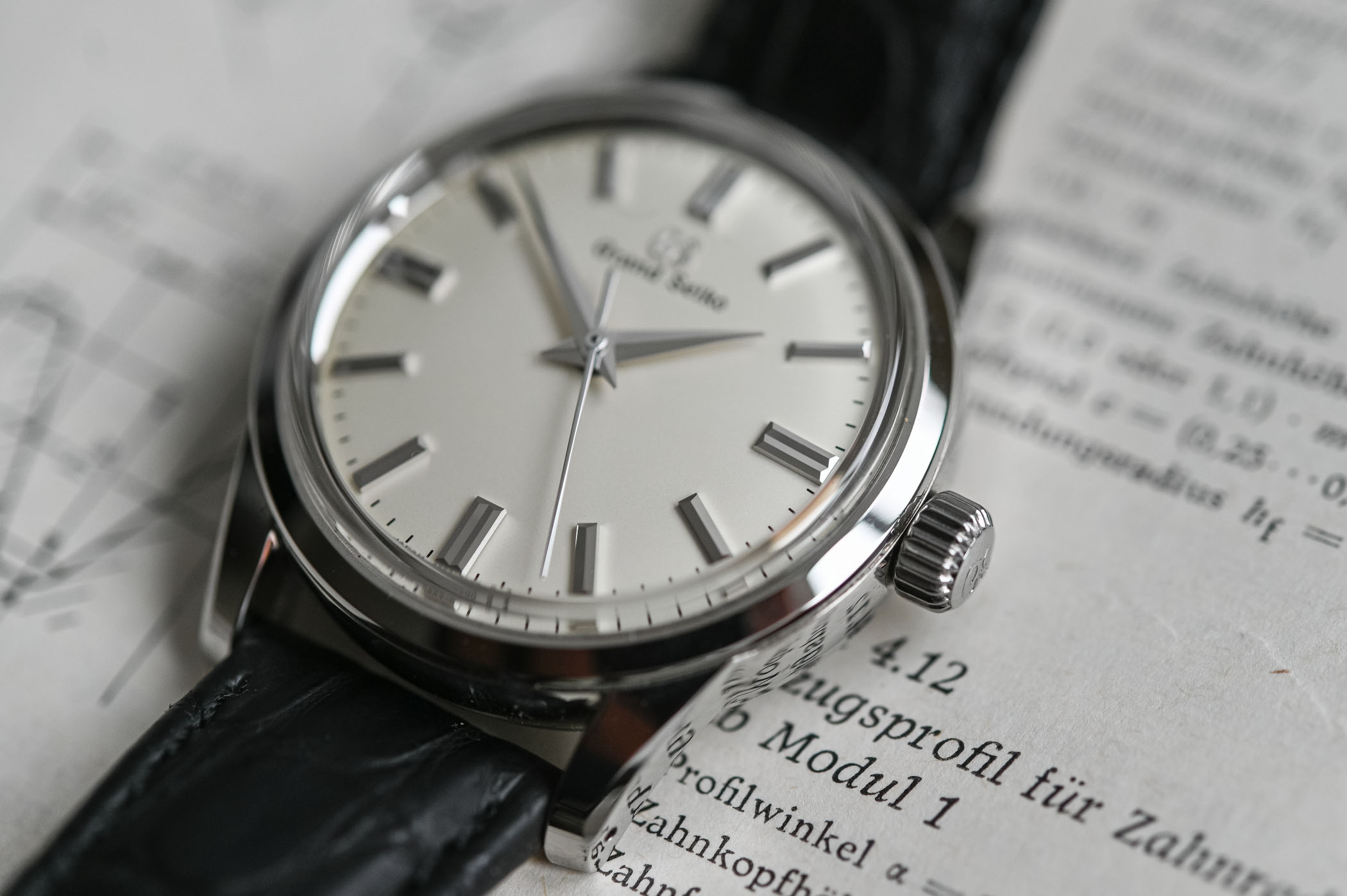 The dial of the SBGW231 is an off-white creamy colour and is almost spartan in its features. With just three hands, hour markers and the GS logo, the simplicity and frugality of the dial evokes the first Grand Seiko of 1960. Look again – if possible with a loupe – and the scenery on the dial suddenly comes to life. The elongated hour markers are like miniature metallic sculptures with pronounced facets and the hands are so sharply defined you could use them as surgical blades. 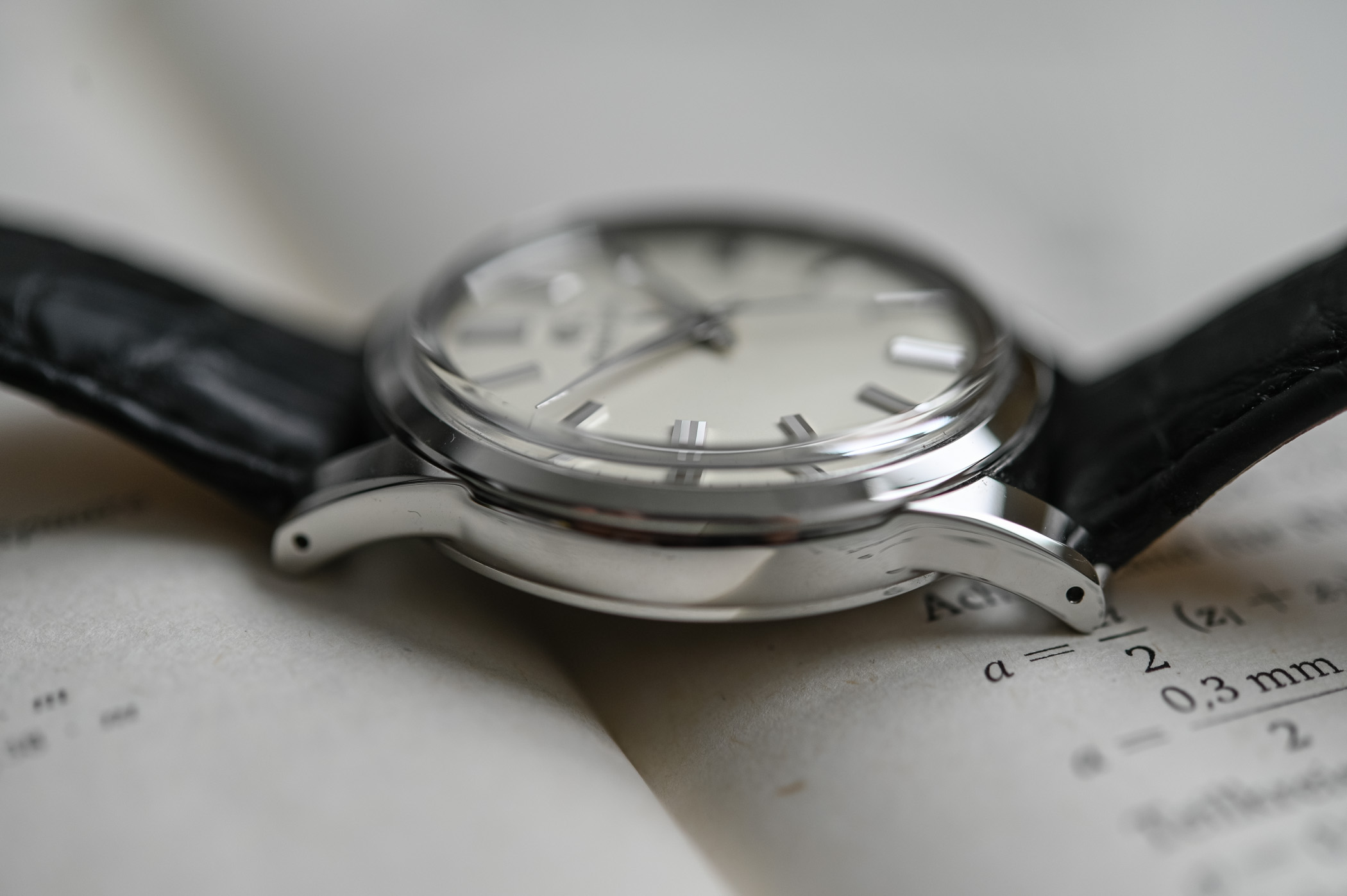 The sharp definition of the elements creates a fascinating spectacle as light bounces off some facets while other surfaces are plunged into the shade. And I’m not exaggerating when I say that thanks to the mirror polishing, you can see yourself reflected in the hour markers and the hands. It’s this attention to detail and refined finishes that really set Grand Seiko apart from the crowd. Incidentally, this model is one of the few hand-wound GS models without a date window… did we just hear a huge sigh of relief? 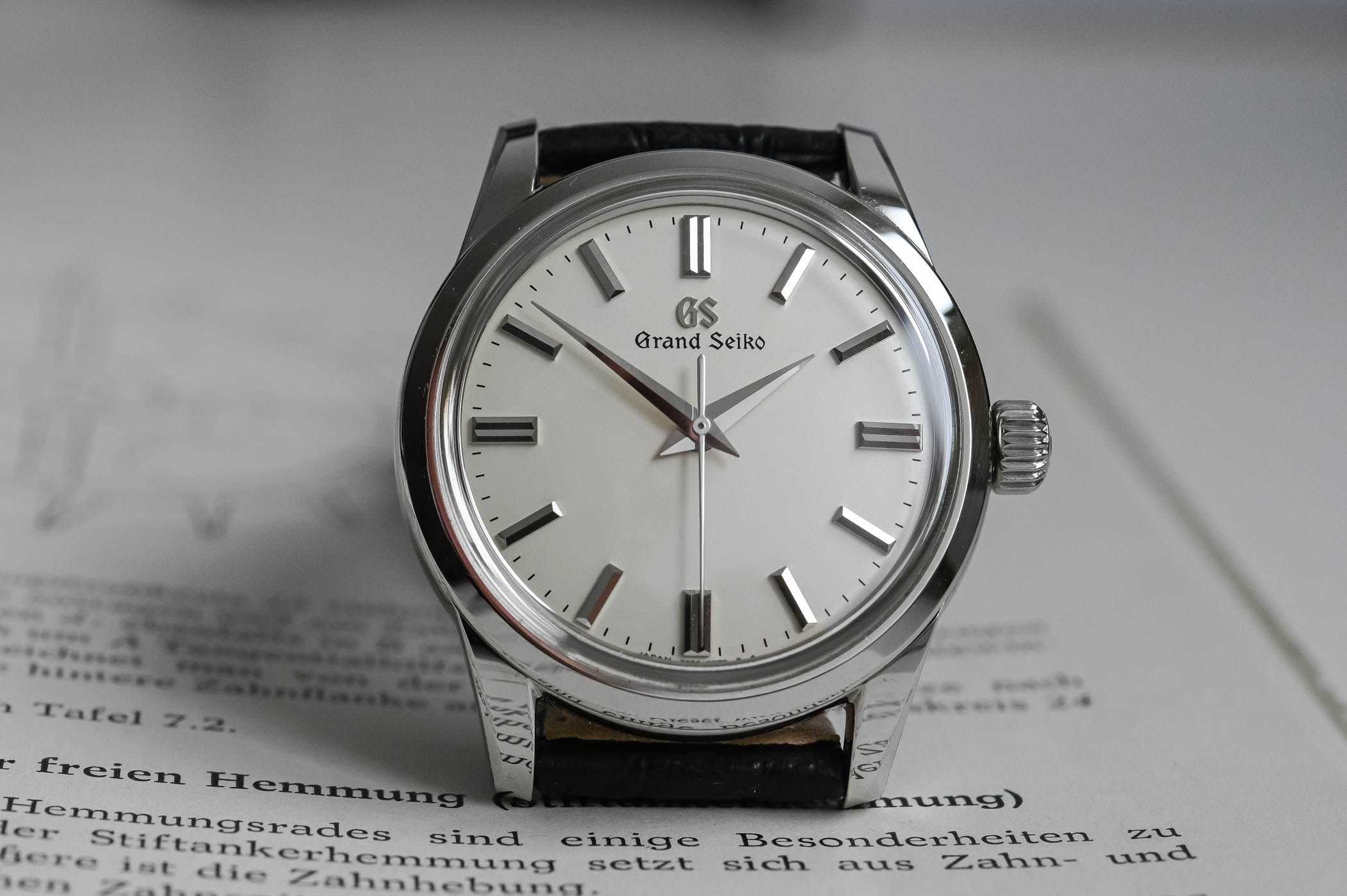 Turning the Grand Seiko SBGW231 over reveals the 9S64 calibre tucked under a pretty solid and mirror-polished caseback with 6 screws and a flange dotted with metallic spheres. Calibre 9S64 is a mechanical, manual-winding movement introduced into the Grand Seiko line in 2011. One of the few manual-wind movements at GS, it honours its 1960 predecessor (equipped with calibre 3180, a manual-winding, 25 jewel, chronometer-grade movement). The movement is capable of delivering a 3-day power reserve thanks to a thinner and longer mainspring made of Seiko’s proprietary alloy (SPRON510). 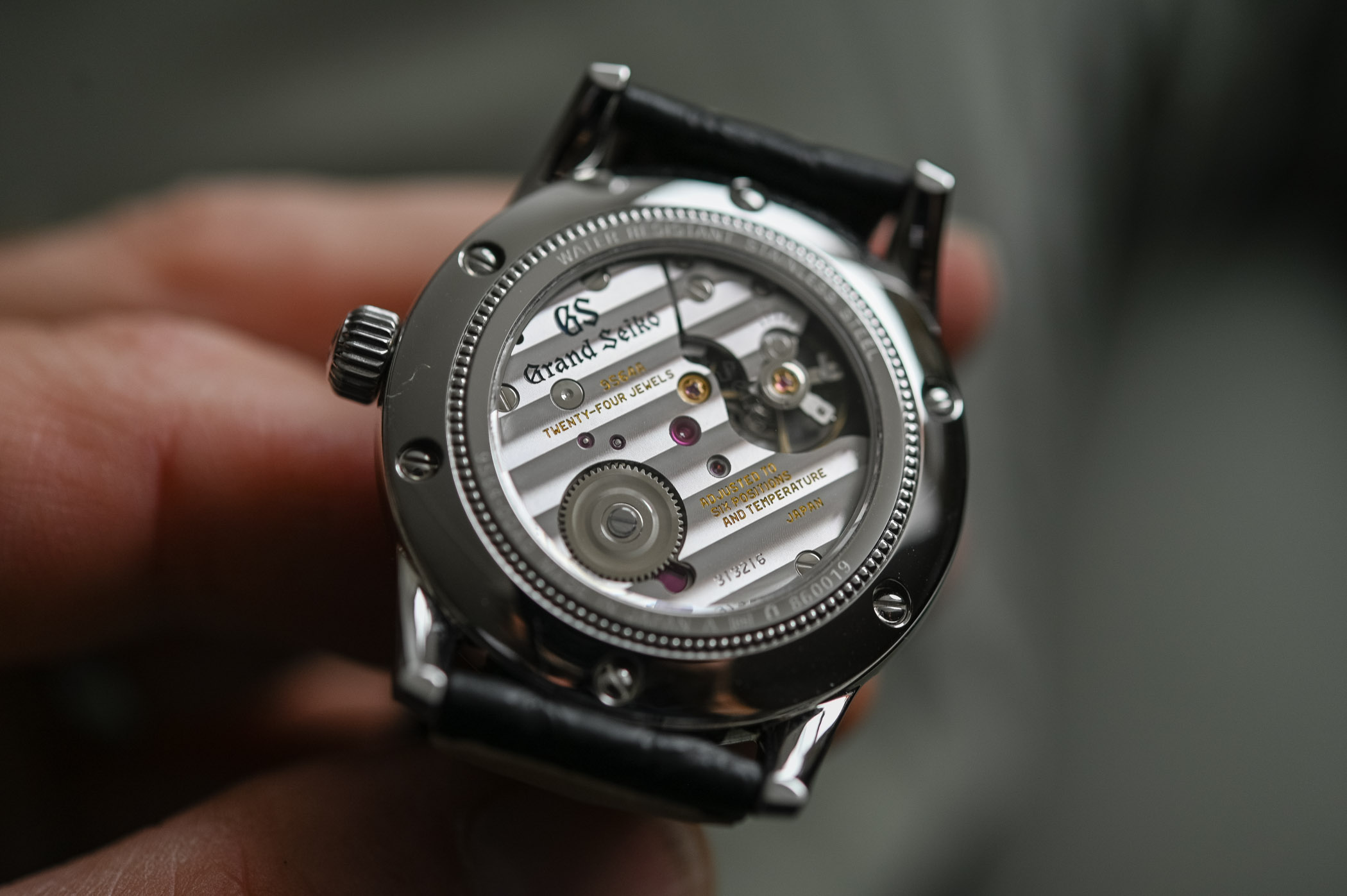 As you know, Grand Seiko covers the entire manufacturing process, from in-house hairsprings to escape wheels made using micro-electro-mechanical systems (MEMS) technology that are 5% lighter than standard ones. The balance spring is also made of a highly shock-resistant and anti-magnetic alloy. The watch is adjusted in 6 positions and its timekeeping precision is -3 to +5 seconds per day, a level tested by Grand Seiko’s exacting standards, the highest published standard in the industry. With a stop-seconds function to boot, all the components in the dial, including the ruby pivot stones, are made in-house. The bridges are decorated with Seiko stripes (note how they manage to play with light and dark) and cover most of the movement, although you can see the balance wheel oscillating at 28,800vph and the ratchet wheel. 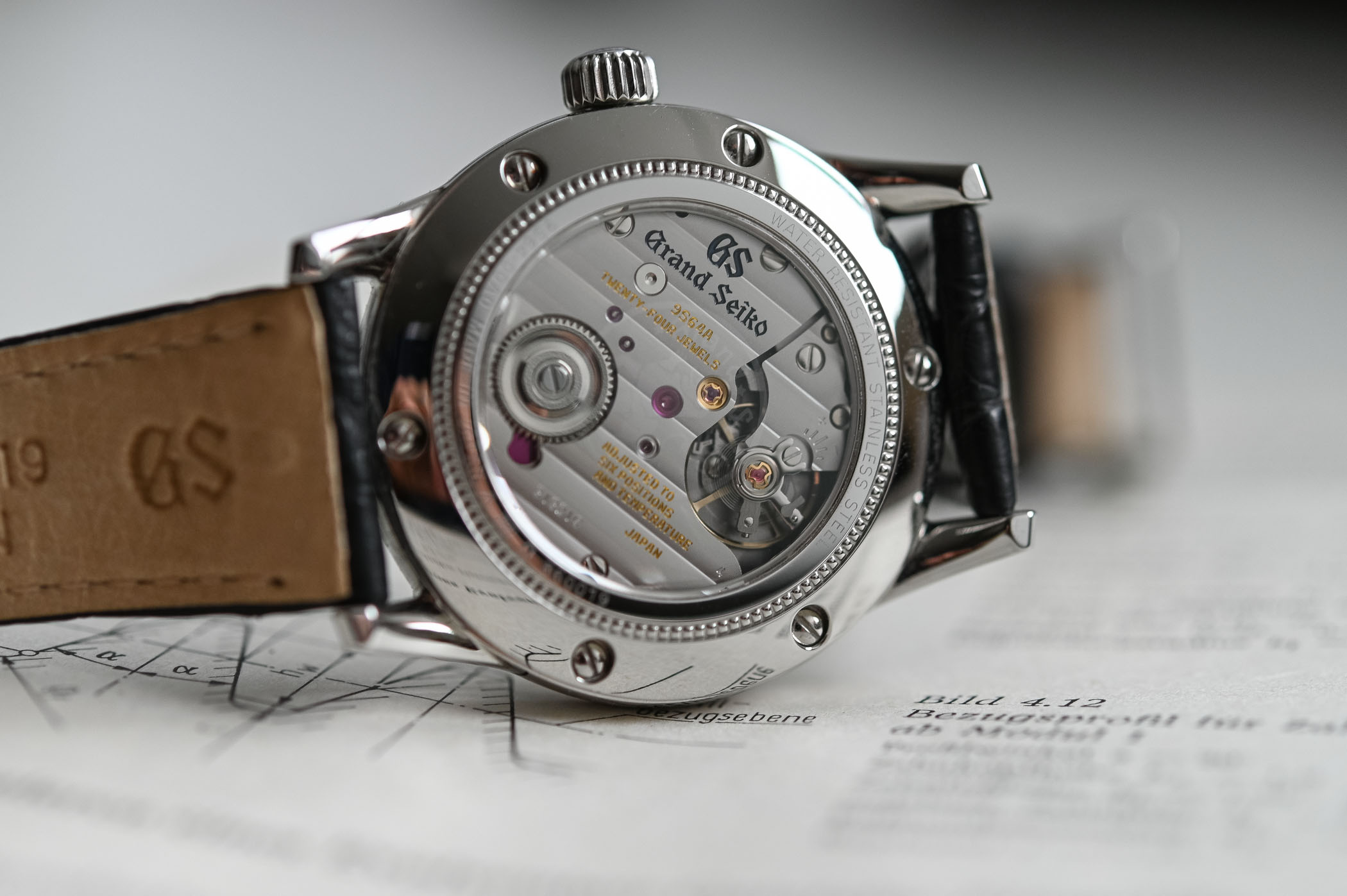 Traditionally sized and proportioned, understated yet bristling with refined details, a precision hand-wound movement with a generous power reserve and a very reasonable price tag, it’s hard to find fault with this Grand Seiko model. The execution of every last element of the SBGW231 is superb reflecting the brand’s quest for perfection. Yes, it might sound like hyperbole, but craftsmanship in Japan is taken very seriously.

The pros are pretty evident, but what are the cons of this watch? Some might quibble that for a dress watch the case could be a wee bit thinner and a power reserve would be a useful addition… What do you think? 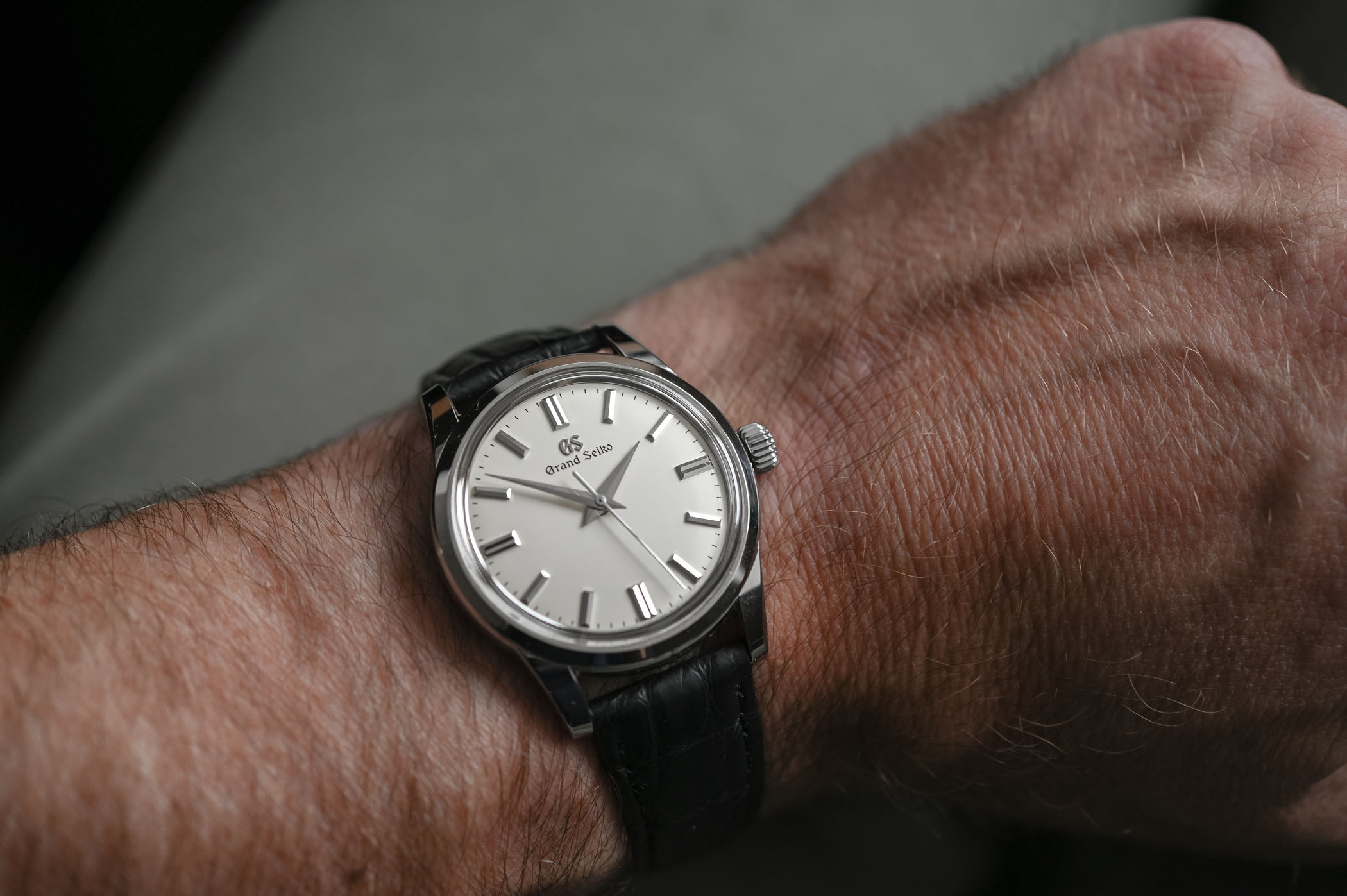 In keeping with its dress watch personality, the strap is a classic black crocodile leather with a pin buckle and twin-trigger release clasp. The pin buckle has a frosted background and the words Grand Seiko in relief recalling the 1960s model. The Grand Seiko SBGW231 retails for USD 4,300. Note that this watch isn’t available on every market (especially quite hard to find in Europe).