Earlier this year, at the Swatch Group’s independent Time to Move event, Omega introduced a chronograph version of its successful Seamaster Diver 300M. Equipped with all the design upgrades conferred on the standard three-hand model in 2018, the performance of James Bond’s watch was notched up with a chronograph complication. Although the movement – Calibre 9900 – is not brand new, it features all the goodies that the Master Chronometer certificate demands. Taking advantage of the fact that this watch is now in stores, we thought we’d take another look at this dark and handsome model. 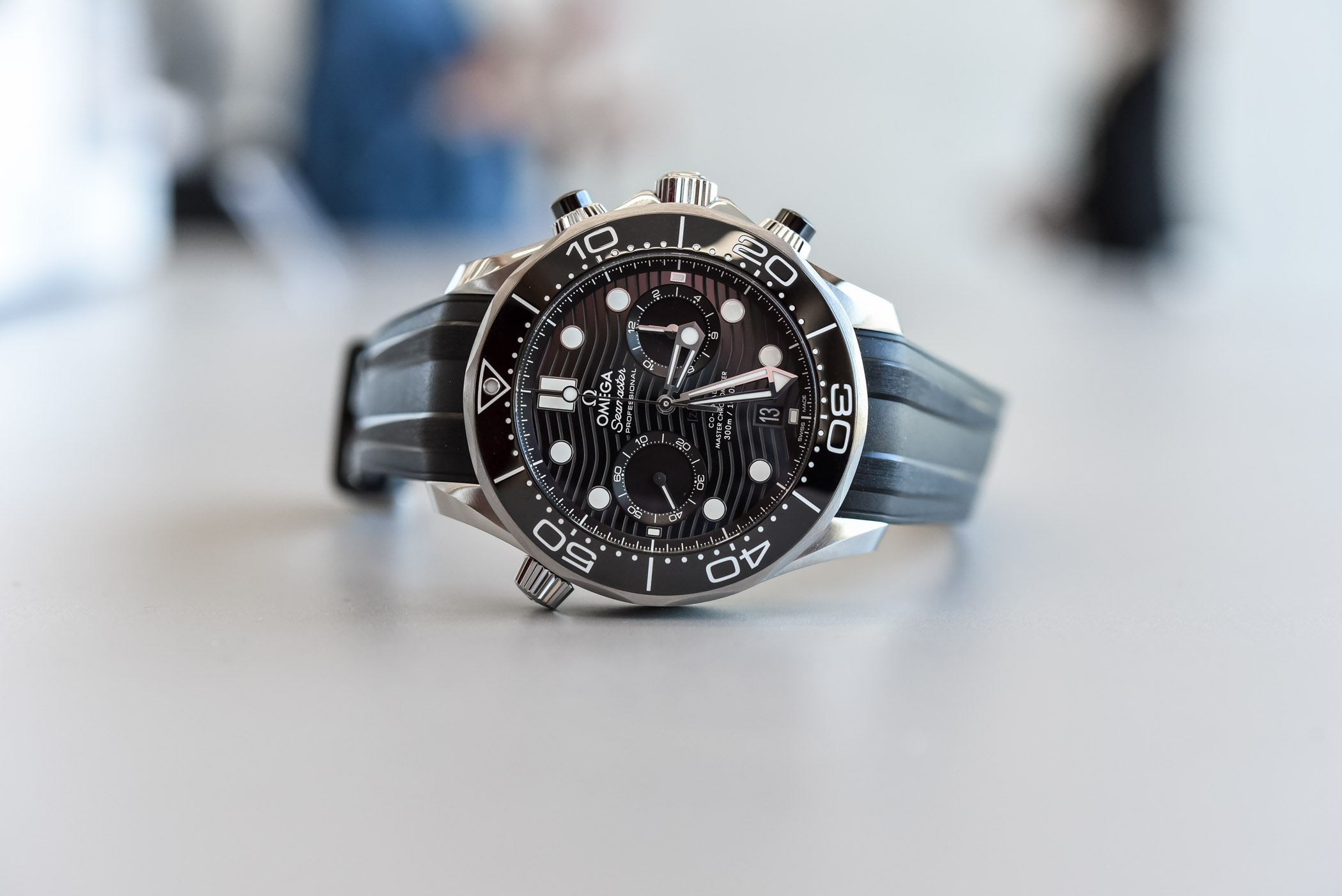 No brand can hold a candle to Omega’s remarkable history. From purveyor of watches to British armed forces in WWII to accompanying astronauts to the surface of the Moon in 1969, from the rigours and prestige of Olympic timing to the deepest dive ever recorded, Omega has timed many of the most important human achievements of the 20th and 21st centuries. It also has a star-studded cast of brand ambassadors, from high-profile sportsmen and explorers to cinematic legends like James Bond. 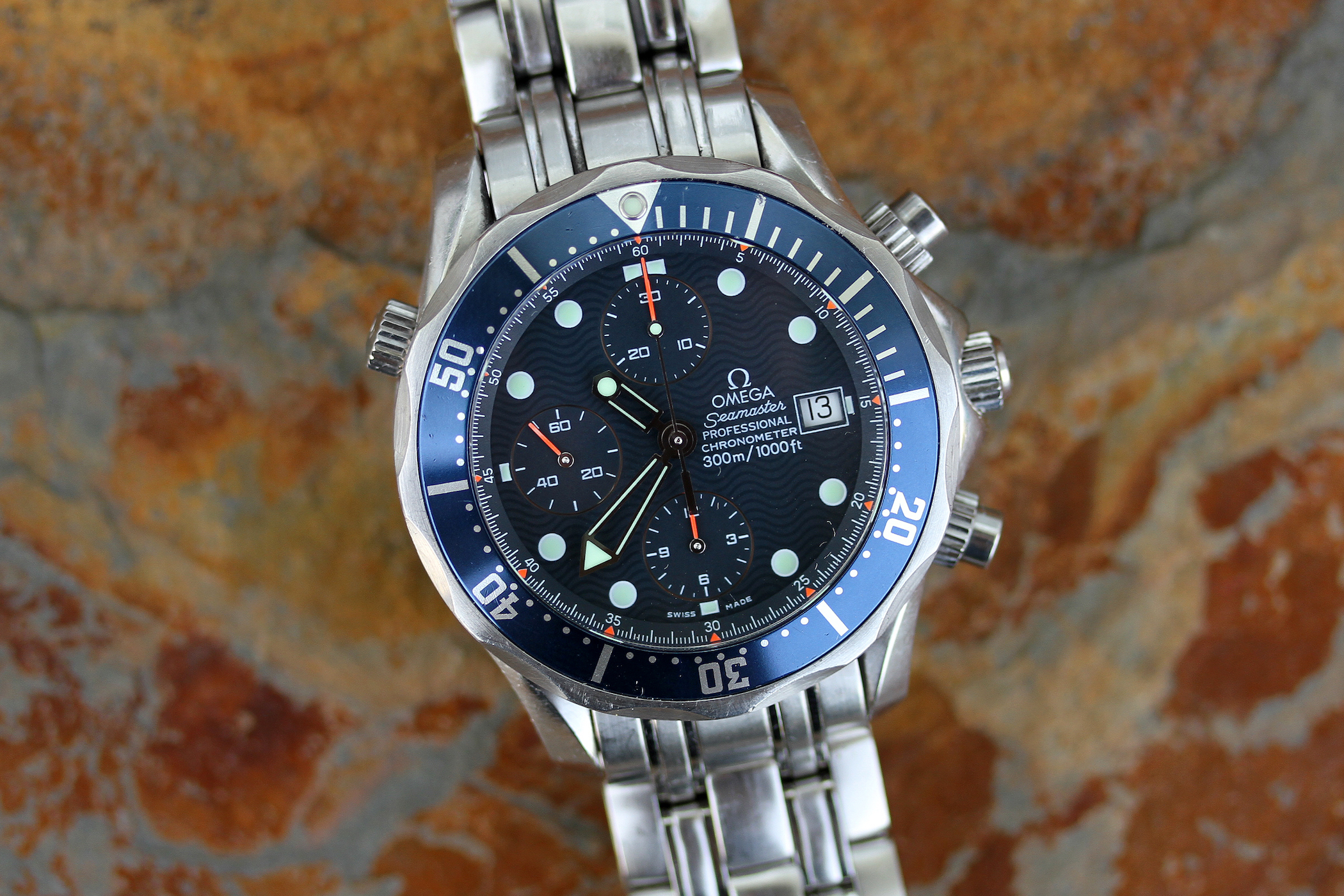 It’s safe to say that nothing at Omega is done in half measures. When the Seamaster Professional Chrono Diver 300M was launched in 1993 it established a record as the world’s first chronograph (chronometer-certified) with pushers that remained operational and functional to a depth of 300 metres. Marking Omega’s return to the field of professional divers’ watches, the two iterations of the SMP 300 – chronograph and standard three-hand – were fitted with a screwed helium valve at 10 o’clock. 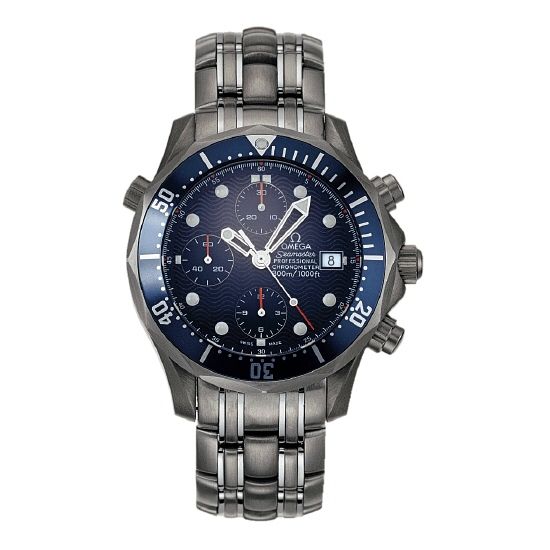 Other distinctive features of this 1993 watch, the reference 2599.80, were the architectural 41.5mm steel case with distinctive twisted “lyre” lugs, a navy-blue dial decorated with wave patterns, applied tritium hour markers, luminous skeletonised hands with plongeur-style, screwed-down crown with O-ring and compression gaskets, unidirectional rotating bezel, screwed caseback, integrated and adjustable 5-link bracelet, automatic calibre 1164 (Valjoux 7750) and a tri-counter layout (plus date) – in short, the whole package and more! One of the first models of the Chronograph was also a showcase of cutting-edge materials with a flashy combination of titanium and gold crowned with a tantalum bezel (ref. 2296.80 with red gold, ref. 2297.80 with yellow gold). 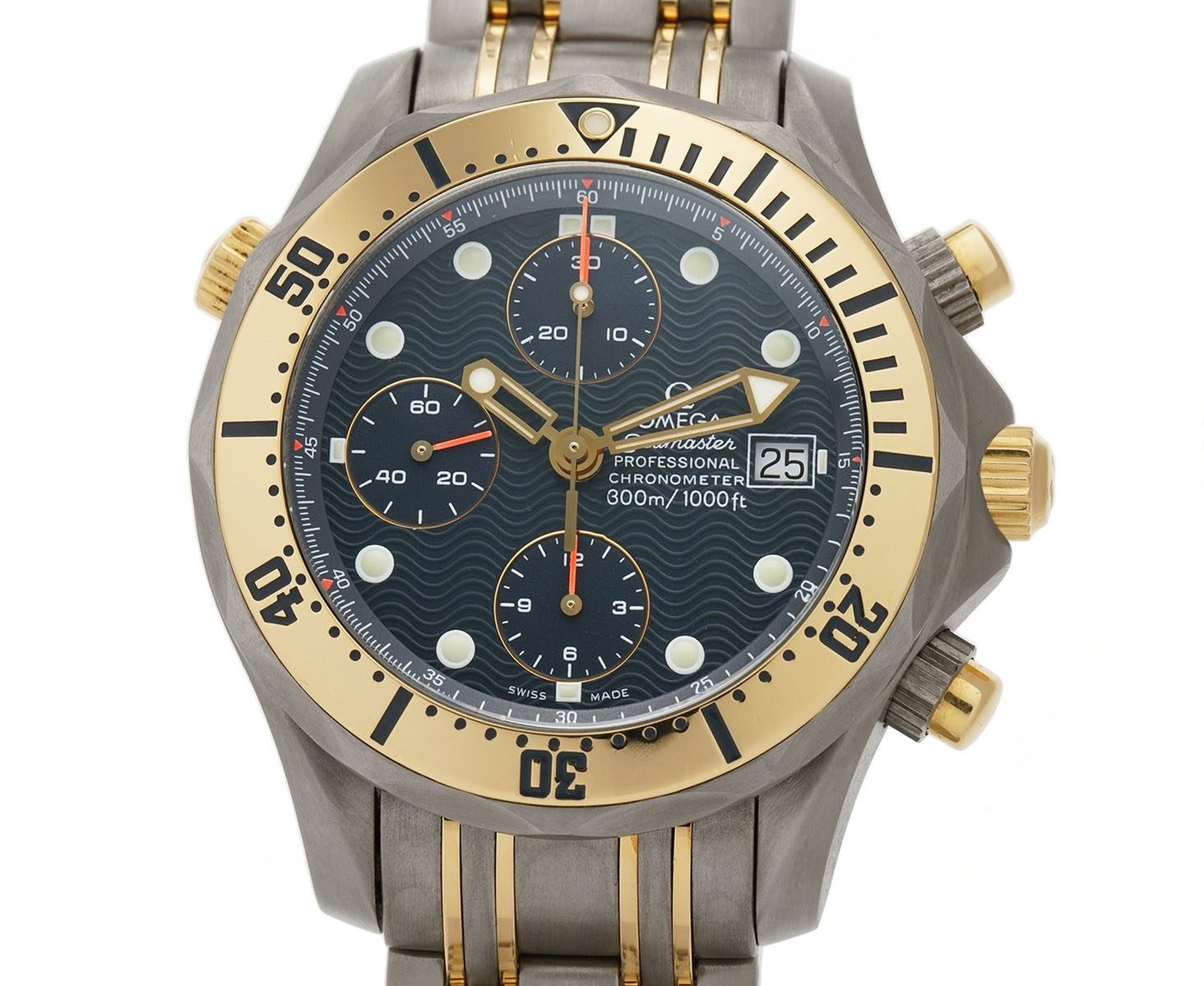 A CHRONOGRAPH JOINS THE SEAMASTER DIVER 300M IN 2019

Earlier this year, albeit eclipsed by the 50th anniversary of the Moon Landing and Omega’s decision to leave Baselworld and stage its very own fair, Time to Move, the Seamaster Diver 300M family was enlarged to accommodate a chronograph version. Although the 2018 makeover and engine upgrade concerned the three-hand model, it was only a matter of time before a chronograph version appeared on the scene. Sure enough, in 2019 Omega unveiled its Seamaster Diver 300M Chronograph complete with all the updates of the standard version and fitted with a (now visible) Master Chronometer in-house movement. 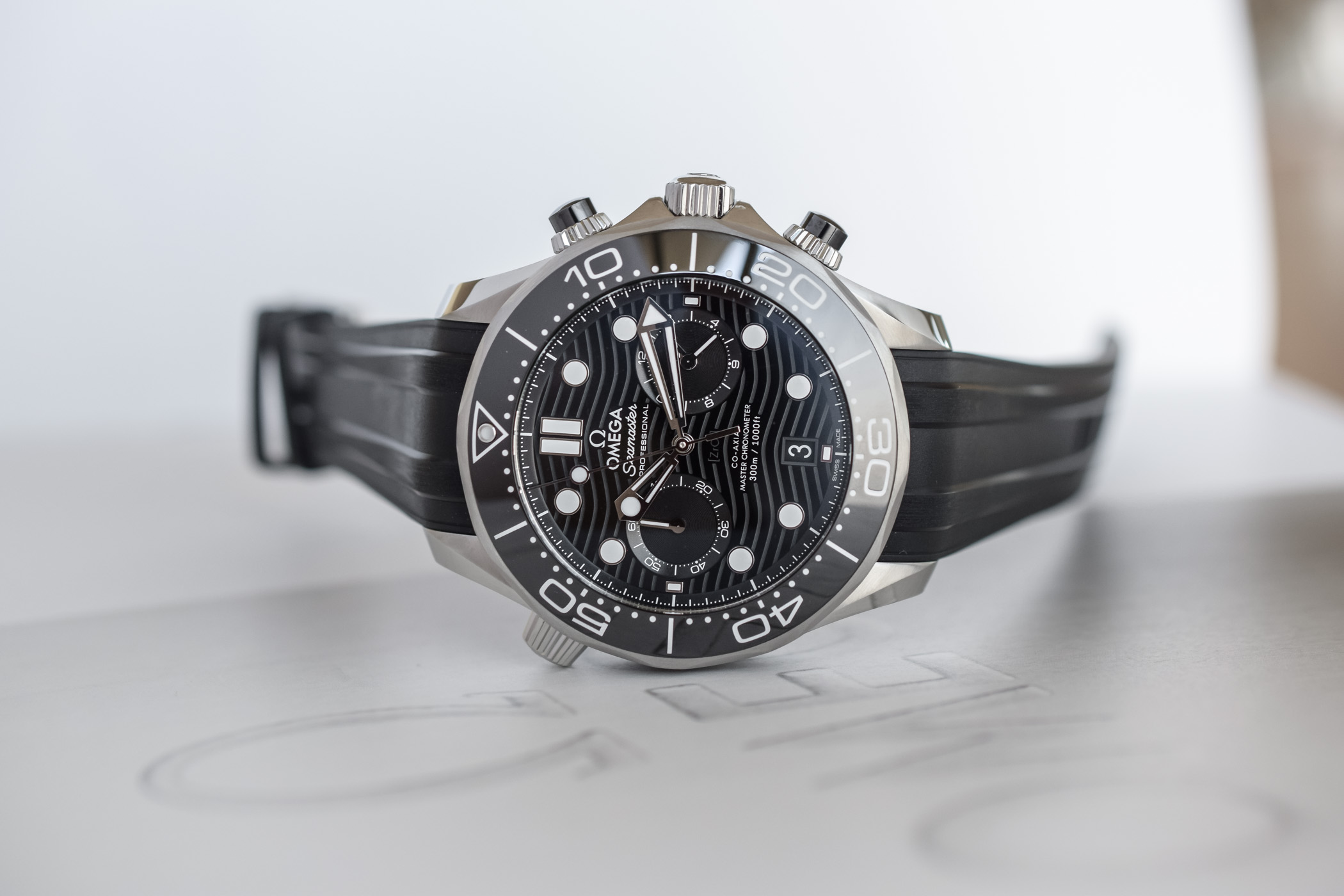 However, this was not the first Seamaster with chronograph functionality. As a descendant of the longest-running product line at Omega with countless sub-families (you can read all about its fascinating twists and turns since 1948 in our three-part video), the Seamaster has appeared in chronograph format including this model with three counters from 1957, the same year as the epic trilogy of Master watches (Speedmaster, Seamaster 300 and Railmaster) was released. Obviously, the water-resistance was somewhat compromised in this 1957 model and guaranteed to just 30 metres, as opposed to the 200m of the Seamaster 300 without chronograph. 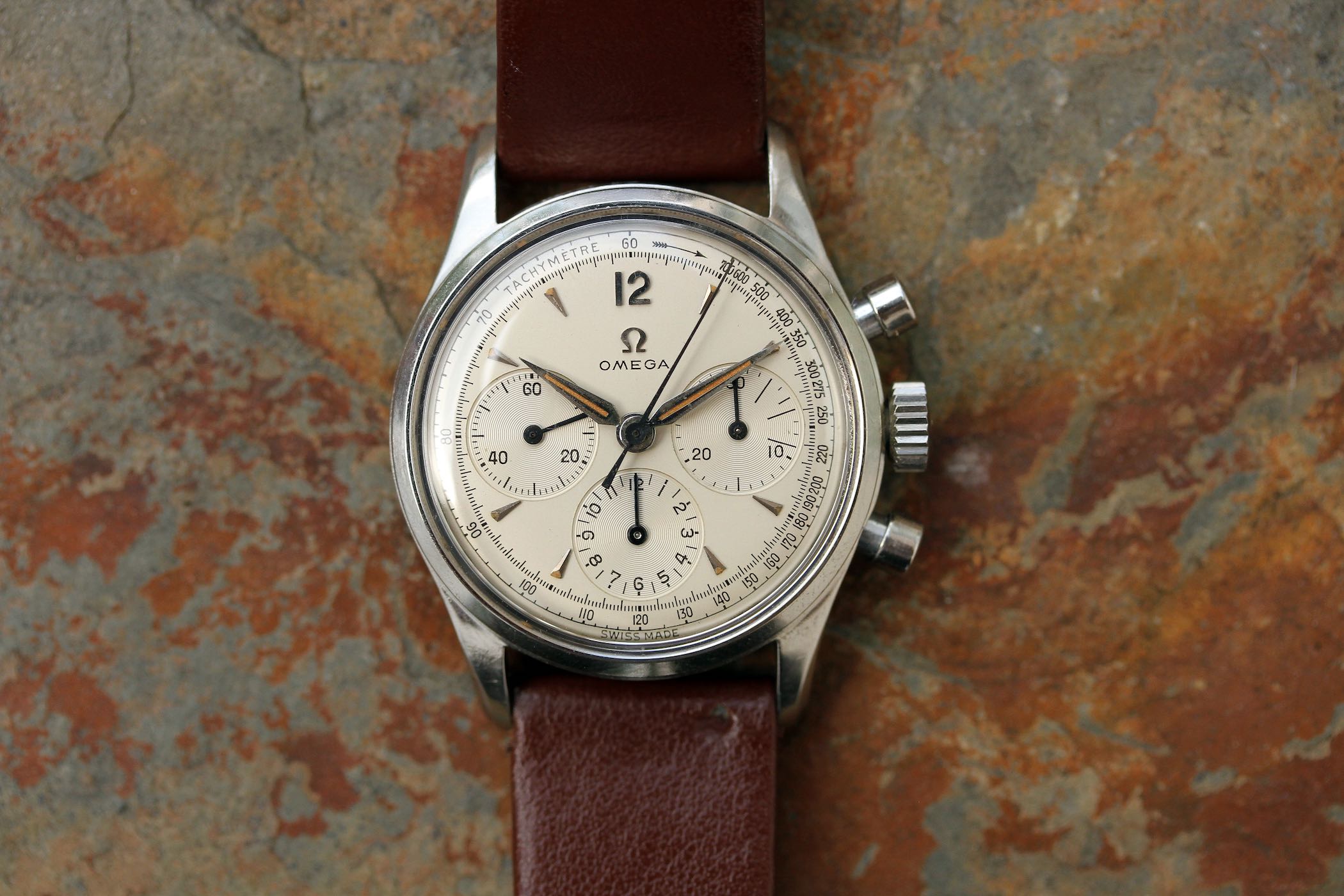 In 1972, Omega started the production of the first true automatic diver’s chronograph, the Seamaster 120 Automatic Chronograph reference 176.004, a watch nicknamed “Big Blue”. This watch was the first truly water-resistant and functional diving chronograph, even at the claimed 120m water-resistance. This professional beast – really a big chunk of steel – featured a unidirectional bezel and the classic blue dial with large markers and hands, all being references to its true vocation. 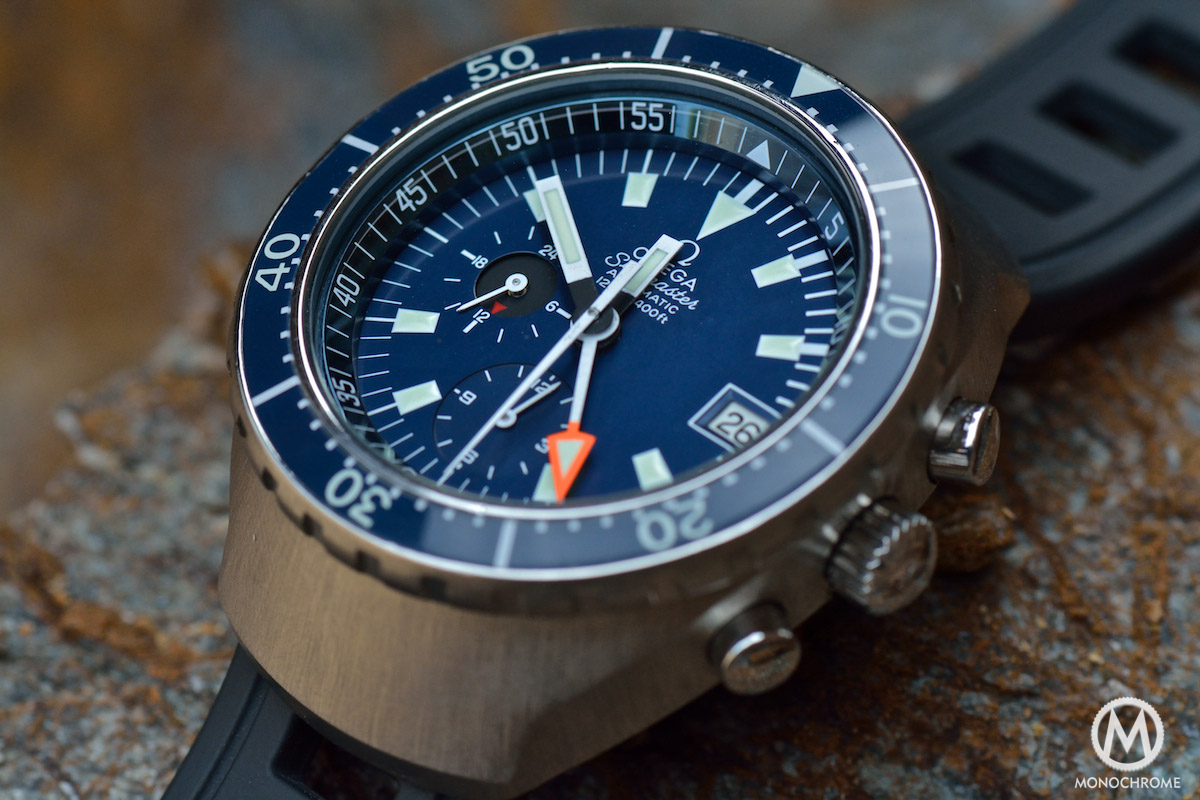 This is not a watch that will leave you indifferent. Dramatic, domineering and dark, the Seamaster Diver 300M Chronograph is masculine to the core.  With a diameter of 44mm and a case thickness of 17mm, this is not a watch for shy or demure folk. Currently, nine different chronographs are available in the collection with plain steel models and two-tone steel and gold. I have to admit that this black dial, black bezel and black rubber strap version takes the cake. Like its brother, the three-hand model, the case and dial are teeming with details and visual treats. 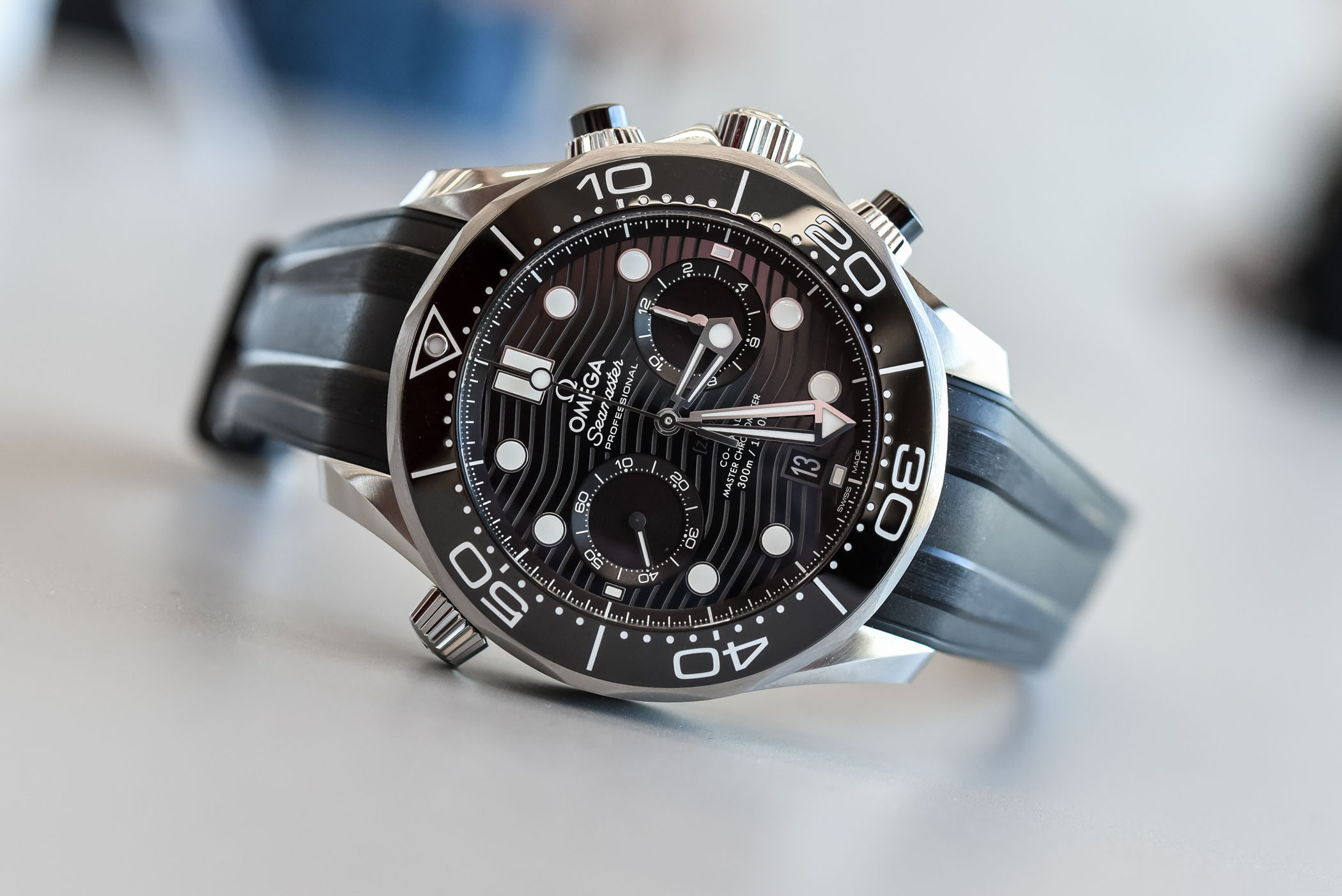 The new Seamaster Diver 300M Chronograph is a very robust watch, but the update is impressive on every level.

The dynamic steel case, with its distinctive lyre lugs and helium escape valve, is composed of pronounced angles and shapes, highlighted with contrasting brushed and polished surfaces. The 12-sided bezel with its scalloped or knurled edges – for extra grip when operating underwater – has a brushed finish and its interior is filled with inky black ceramic. The glossy ceramic unidirectional bezel features a white enamel 60-minute diving scale and the all-important triangle at 12 o’clock with a luminous dot. Ceramic is the definitive star of the show here and in addition to its application on the bezel is also used on the dial and the shiny black pushers for the chronograph. The beauty of ceramic is its resilience and scratch-resistance combined with its silky smooth touch. 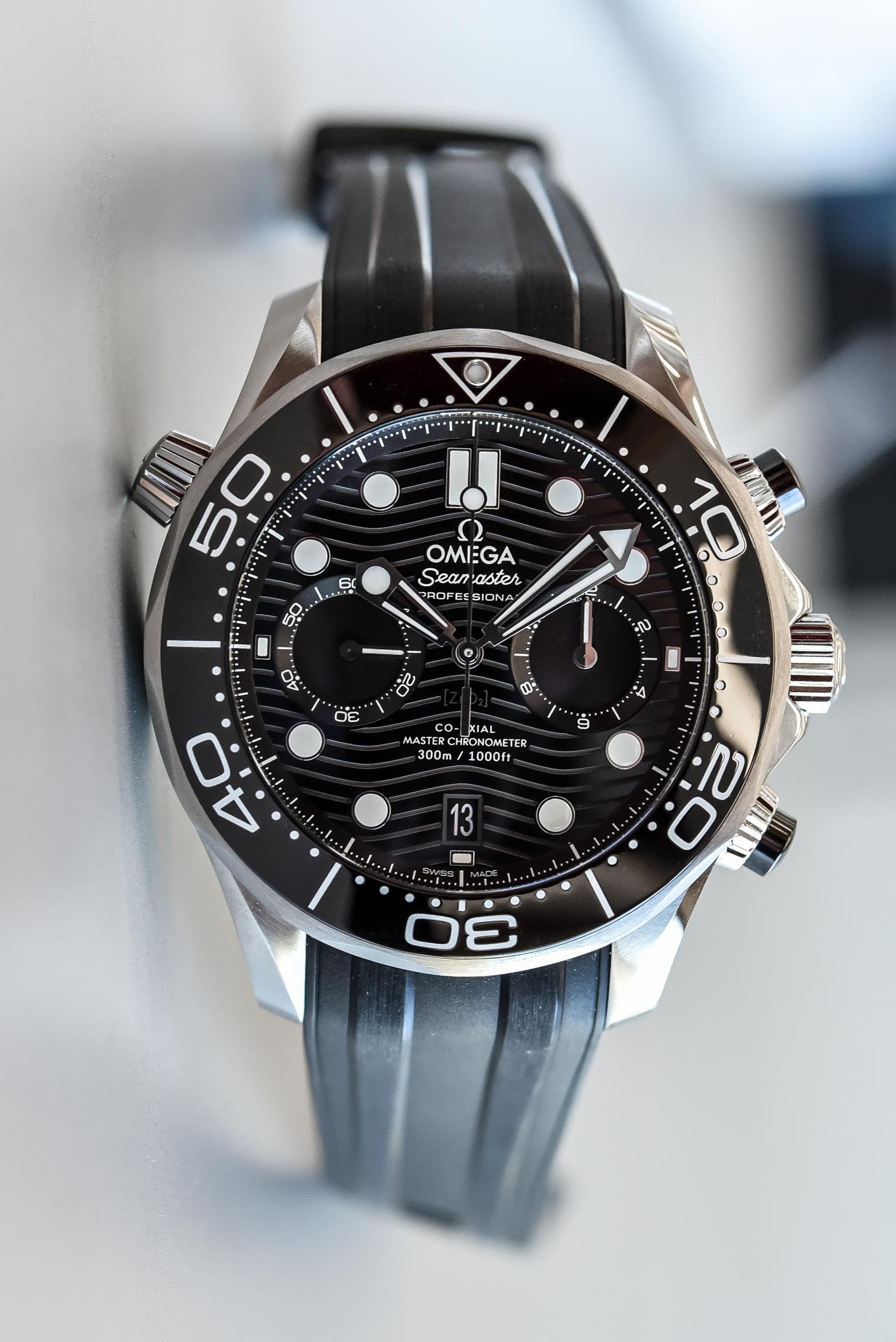 The helium valve at 10 o’clock, the distinctive feature of the Seamaster Diver 300M family, is conical in shape making it easier to manipulate clearly establishing its personality as a professional diver, capable of fathoming depths of 300 metres. During decompression, helium molecules expand and can pop the crystal face and caseback. To avoid this, helium molecules need to be released and the helium escape valve is there for this purpose. Redesigned and patented with new technology, even if the conical Helium Escape Valve is accidentally opened underwater, the watch is guaranteed to remain water-resistant to 50m. 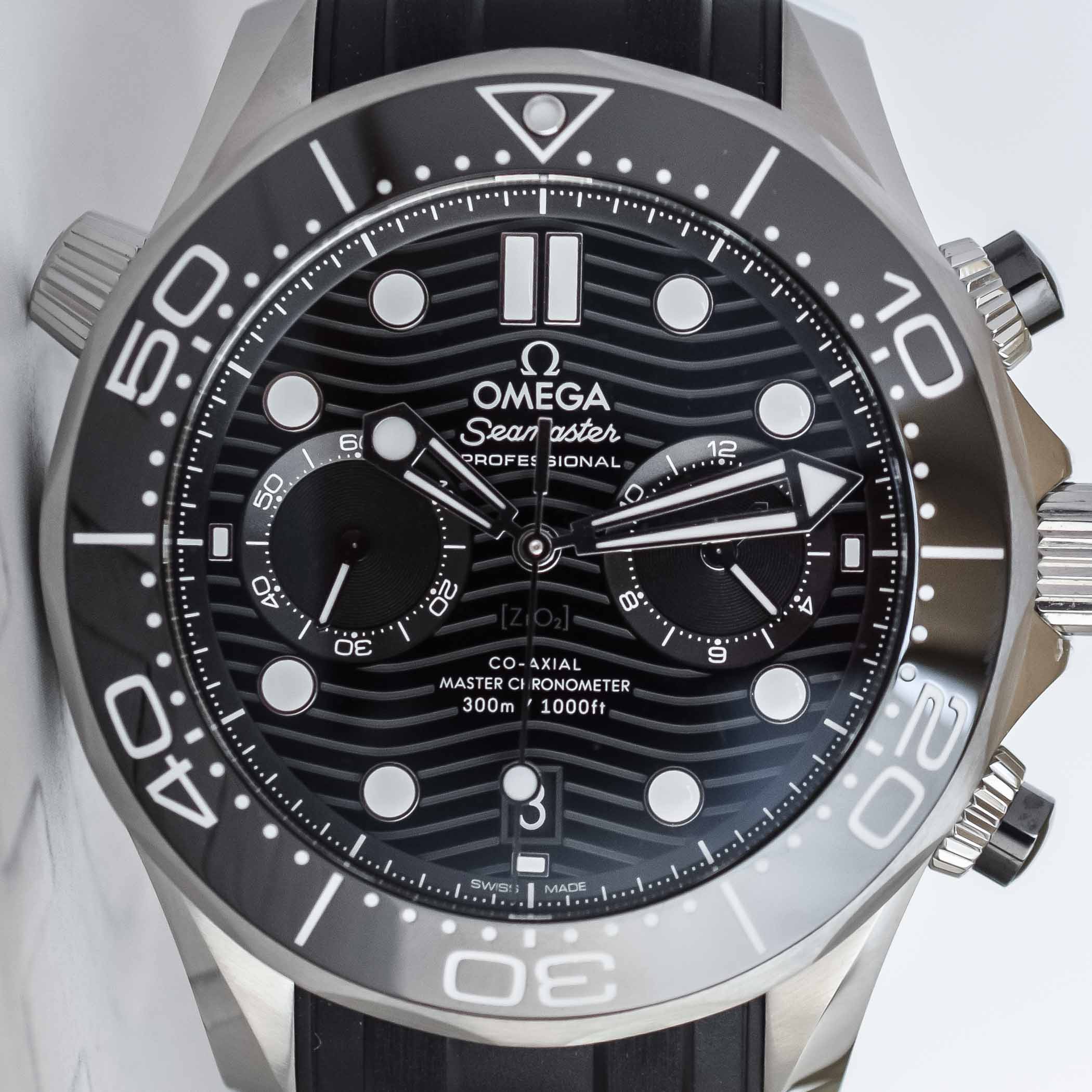 The black ceramic dial is polished and then laser-engraved with wave patterns that add depth and movement to the dial. The hour markers, composed of eight large raised dots and double bars at 12 o’clock and a truncated one at 6 o’clock, are generously filled with Super-LumiNova as are the skeletonised hour and minute hands and the tip of the central chrono seconds hand. Set against the black background, the white hour markers and hands (all rhodium-plated) really stand out and emit a long-lasting glow in the dark.

Since this model shares the same movement as the Planet Ocean 600 Chronograph, the layout of the counters is identical. Utilising the space judiciously, the bi-compax counter arrangement features a small seconds counter at 9 o’clock and a clever combo of 60-minute and 12-hour counter at 3 o’clock with two hands – the smaller one for the hours and the larger luminous one for the minutes. Both counters have snailed interiors creating an interesting optical contrast with the wavy pattern in the background. And like the three-hand version, the date window appears in a rectangular aperture at 6 o’clock with a black background. It might seem like there is a lot of action going on, but the chronograph functions are extremely easy to activate and read.

As mentioned, the calibre powering this combo diver/chronograph is the well-known, tried-and-tested calibre 9900. It was, in fact, the first of Omega’s chronograph movements to receive the METAS–approved Master Chronometer certification, onboard a Seamaster Planet Ocean model in 2016. 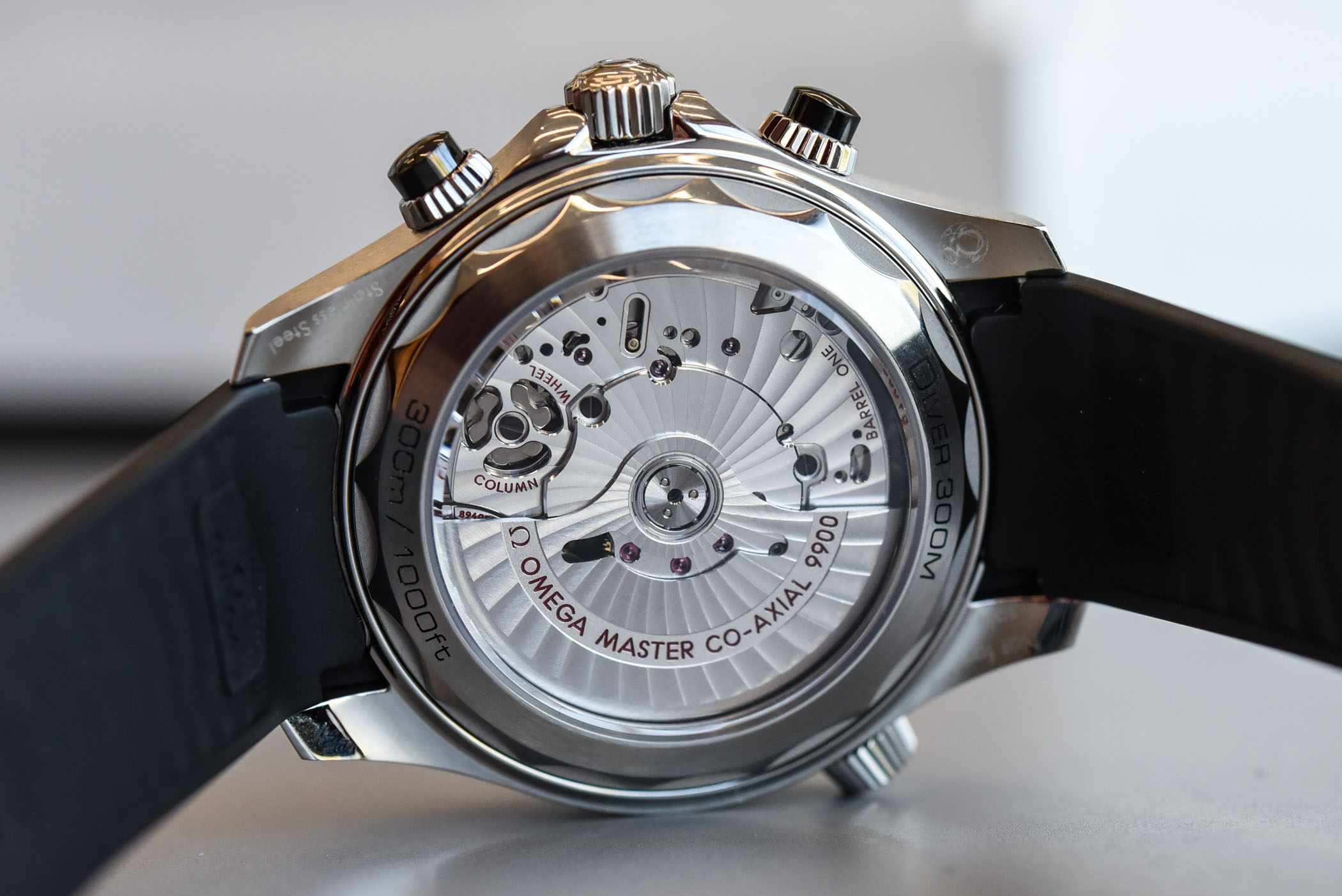 Calibre 9900 is an in-house self-winding integrated chronograph movement with a column-wheel mechanism, vertical clutch and Co-Axial escapement – Omega’s finest technologies for a chronograph. In addition to its robust 60-hour power reserve provided by two barrels, the use of non-ferrous silicon in the balance spring ensures the watch can resist magnetic fields of 15,000 Gauss. A sapphire crystal caseback reveals the large oscillating weight and bridges decorated with Geneva waves that fan out from the centre.

A professional diver and a sturdy chronograph, the handsome black ceramic suit attenuates some of the bulk but don’t expect this watch to slip demurely under your cuff.  It is a powerful watch with a lot of presence, no doubt about it, but compared to the brighter two-tone steel and yellow gold case versions with blue or grey dials and blue bezels and pushers, this black model on a black rubber strap is less flamboyant. 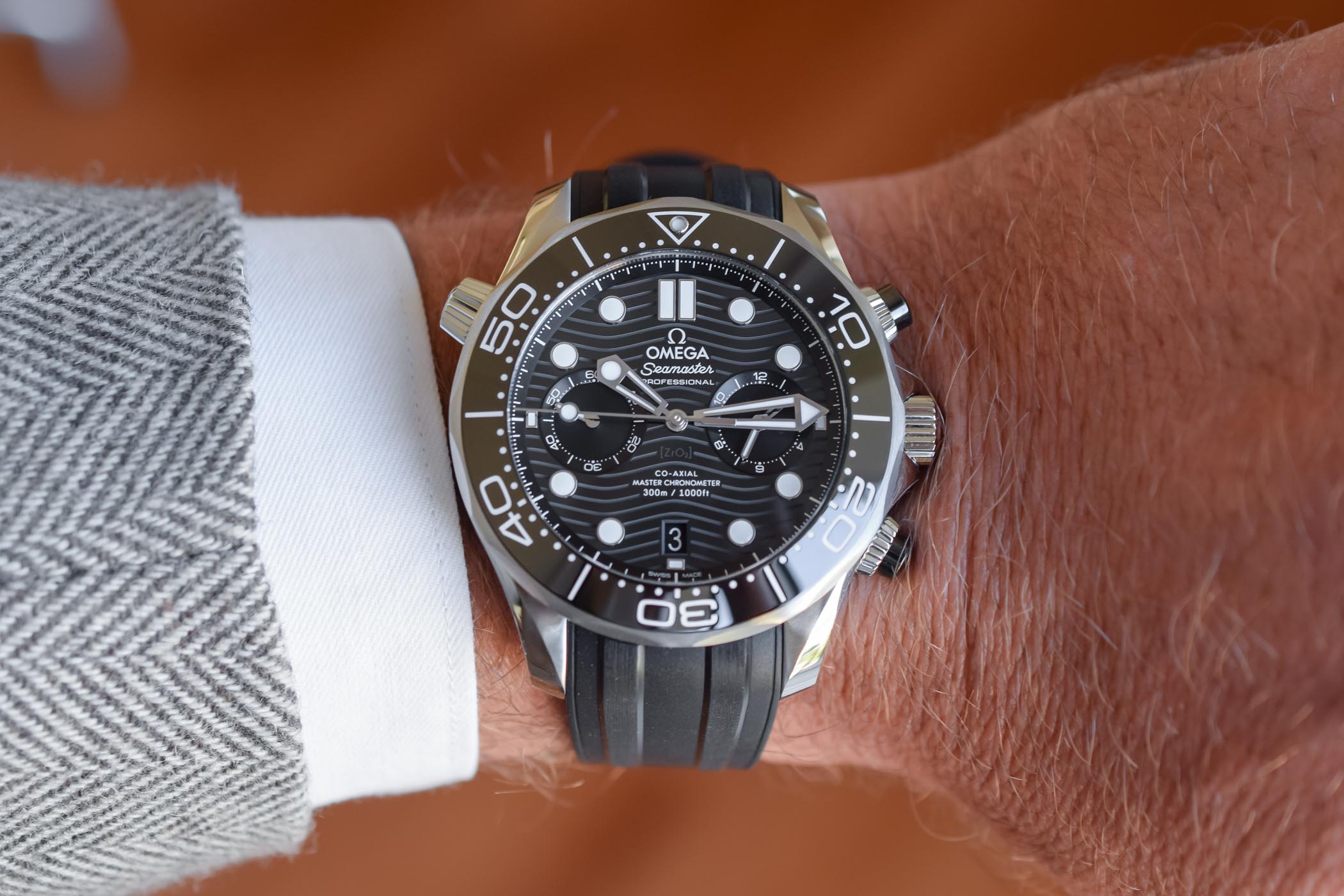 I’m afraid purists are going to have to accept the fact that sports watches are chic and inching their way into all sorts of environments. Even if they are not always used for what they are intended, they certainly let you daydream about your next Bond adventure when your Seamaster Diver 300M Chronograph will come in handy.

The Seamaster Diver 300M Chronograph is a solid package, to say the least, with a price tag that seems amply justified given the functionality, the high-grade finishes and the Master Chronometer movement.

The Omega Seamaster Diver 300M Chronograph is now available in stores (as of November 2019). This particular model in steel with a black dial and rubber strap on steel pin buckle (reference 210.32.44.51.01.001) retails for EUR 6,700. Visit Omega’s website for more details – omegawatches.com.