We’ve said it already and we’ll probably say it again, but Longines is on fire when it comes to its “Heritage” collection, with multiple handsome, highly desirable vintage-inspired watches launched in the past couple of years. Think about the Heritage Classic Sector Dial, the recently revamped Avigation Watch Type A-7 1935 or the Heritage Military RAF. Among these modern models inspired by historical pieces, there was one recently launched that really caught our attention, the Longines Heritage Classic Tuxedo Chronograph. And today we give it some wrist time. 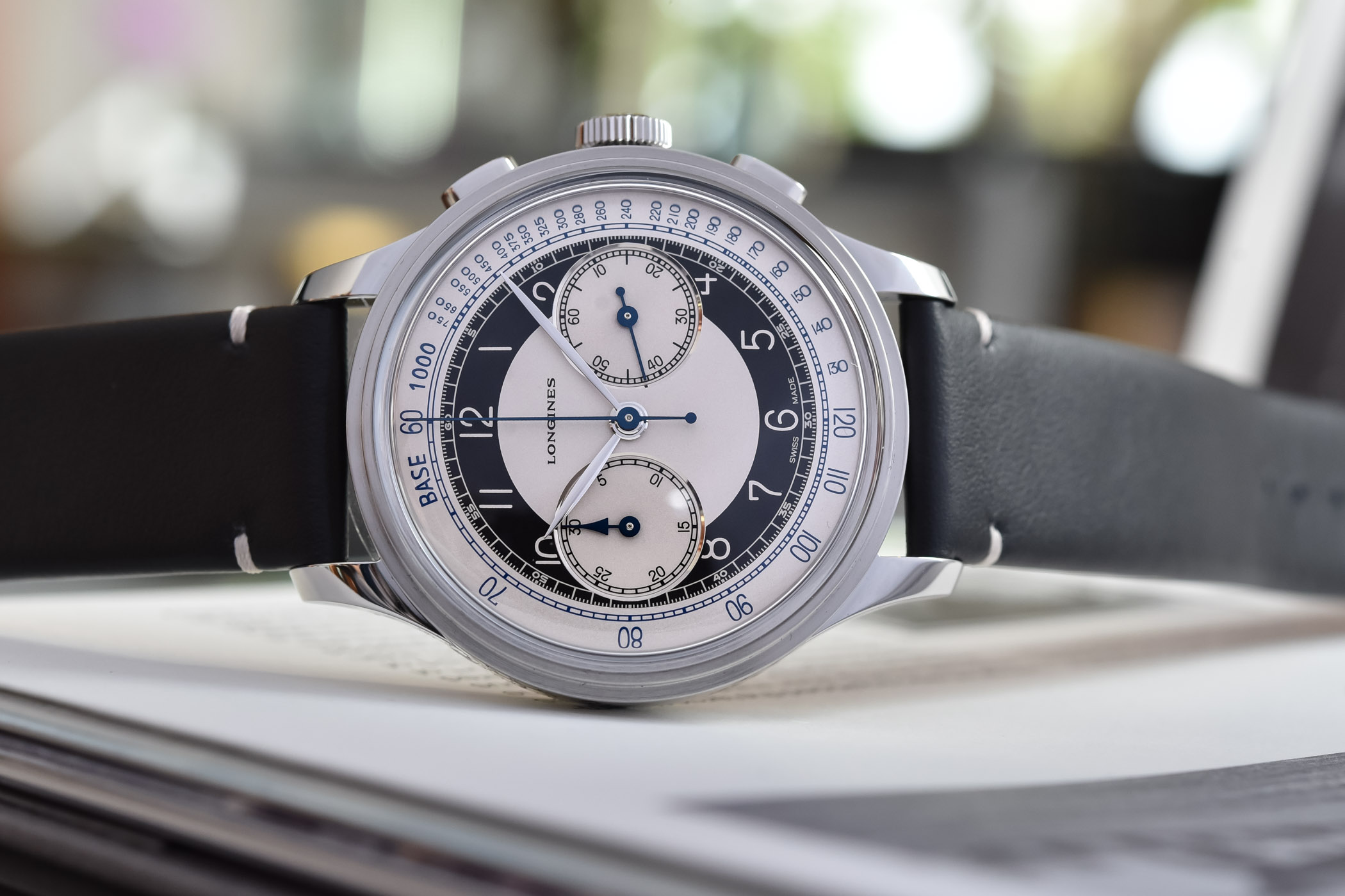 Presented earlier this year along with a small seconds version, the Longines Heritage Classic Tuxedo Chronograph is, as you would have guessed, a modern re-edition of a historical Longines watch. Founded in 1832, Longines is one of the oldest brands of the Swiss watch industry still in activity. As such, you can imagine that its heritage collection is wide and constitutes an immense source of inspiration for today’s designers. There are indeed countless fascinating watches produced during the golden age of watchmaking – 1940s to 1960s – that deserve some attention at Longines. One of them is a chronograph from 1943 with a classic bi-compax layout and two-tone dial, typical of the era. 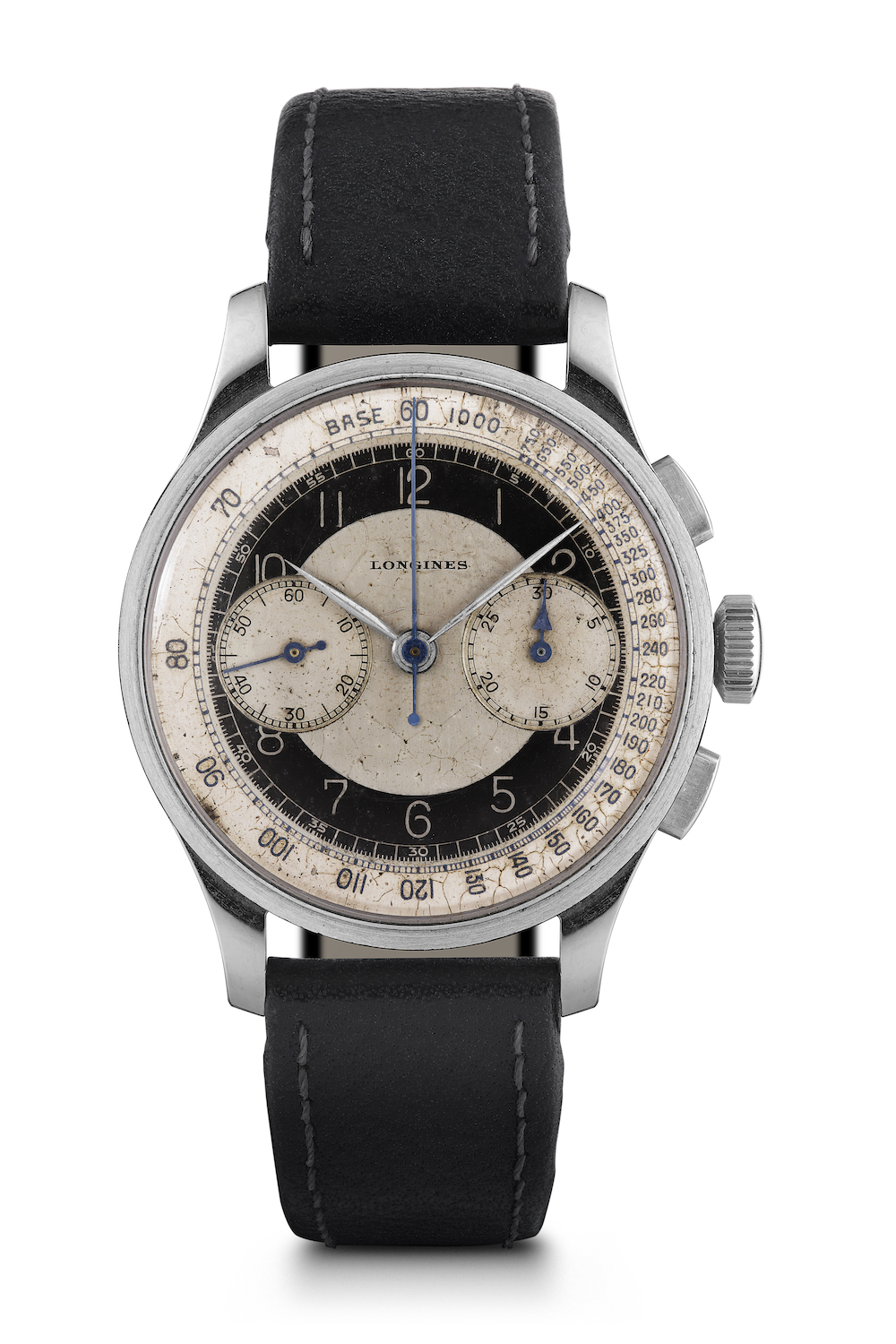 The 1943 Longines chronograph owned by the brand’s museum, which served as an inspiration for the Longines Heritage Classic Tuxedo Chronograph.

Longines has recently re-issued several models of its past in a very faithful way. When some brands use older models as an inspiration for modern watches, enlarged and equipped with modern features (such as a date), Longines tends to be more accurate in its re-editions, as the most obvious changes remain an increased case diameter and a contemporary movement. Yet, when it comes to case design and dial layout, the brand often retains all the attributes of antique watches. So is the new Tuxedo Chronograph. 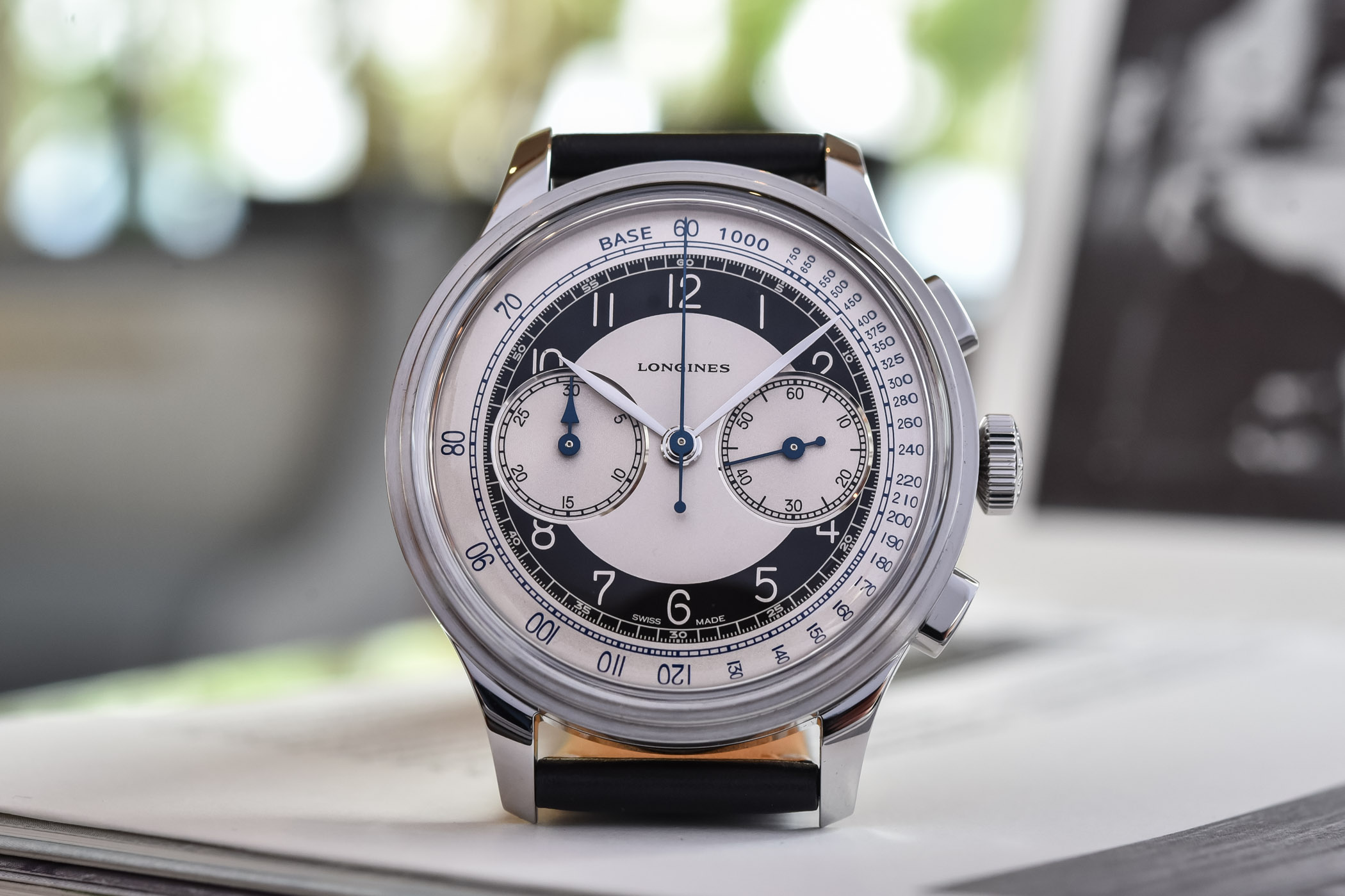 Let’s go straight to the point: case, dial, layout, hands, fonts, colours… This new Tux’ watch is almost identical to the 1943 version. And yes, it does make one truly handsome watch. 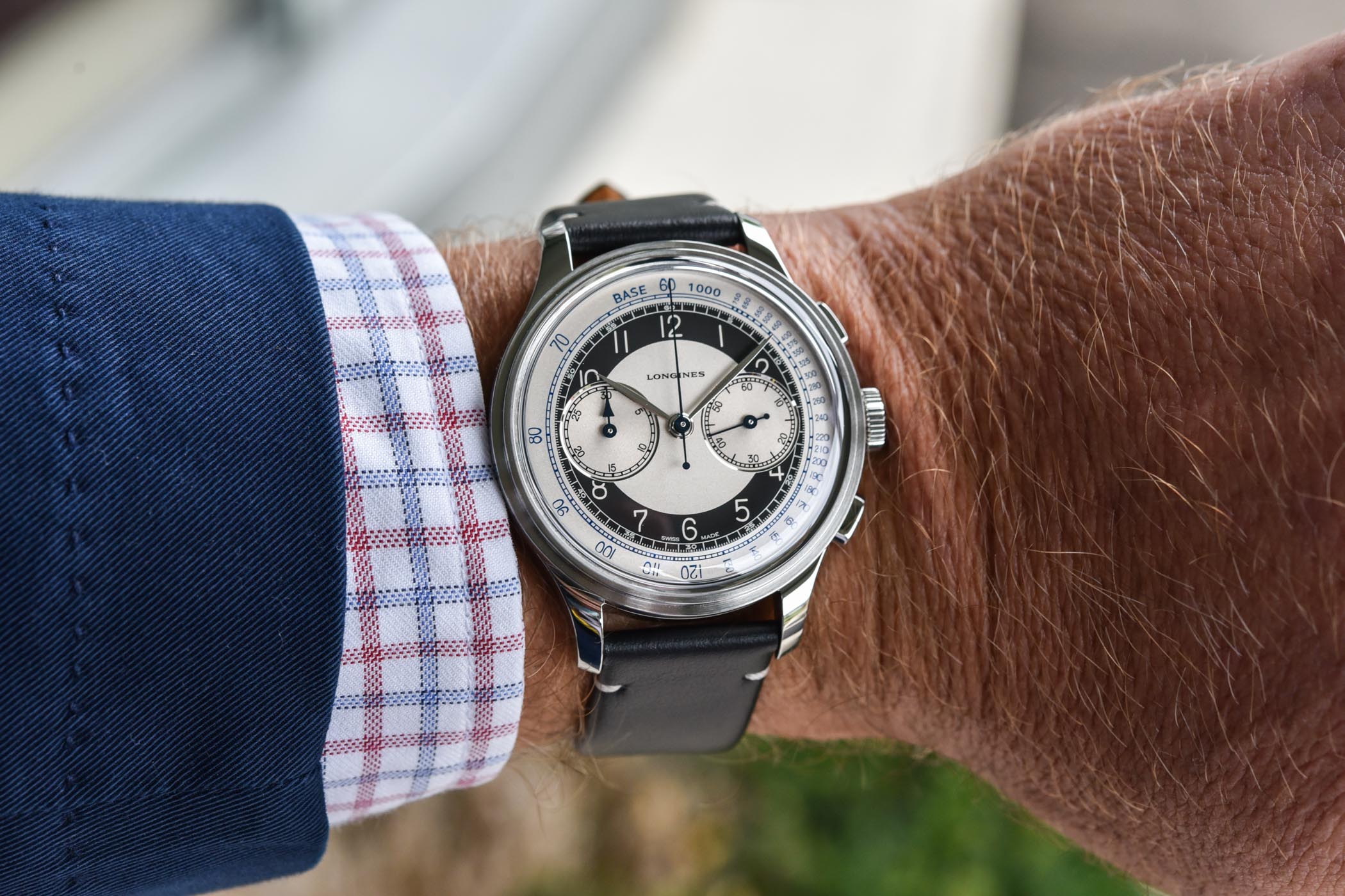 The case of the Heritage Classic Tuxedo Chronograph measures a relatively reasonable 40mm diameter, which certainly is larger than the original 1943 watch but remains fairly compact by modern standards. Another important remark concerns the lugs, which are nicely curved and not too long – something that can be problematic on some of Longines watches. Here, the 40mm diameter and the ergonomic lugs make for a watch that sits well on the wrist, with enough presence but also a certain respect for vintage codes. The height is about 13.5mm, not specifically thin but expected for an automatic chronograph.

The shape of the 1943 watch has also been respected, as the case has a typical coin-edge, Calatrava-like design, with a flat stepped bezel and a highly domed box-shaped sapphire crystal on top. The surfaces are mostly polished, with brushed accents on the edges of the bezel. The crown has a diamond profile next to the case and the pushers are rounded rectangles, following the lines of the case. The whole habillage is pleasantly executed, with a nice feeling of solidity and clean assembly. I might have prefered to see more brushed surfaces, to tone down the look a bit, but this is a neglectable comment. 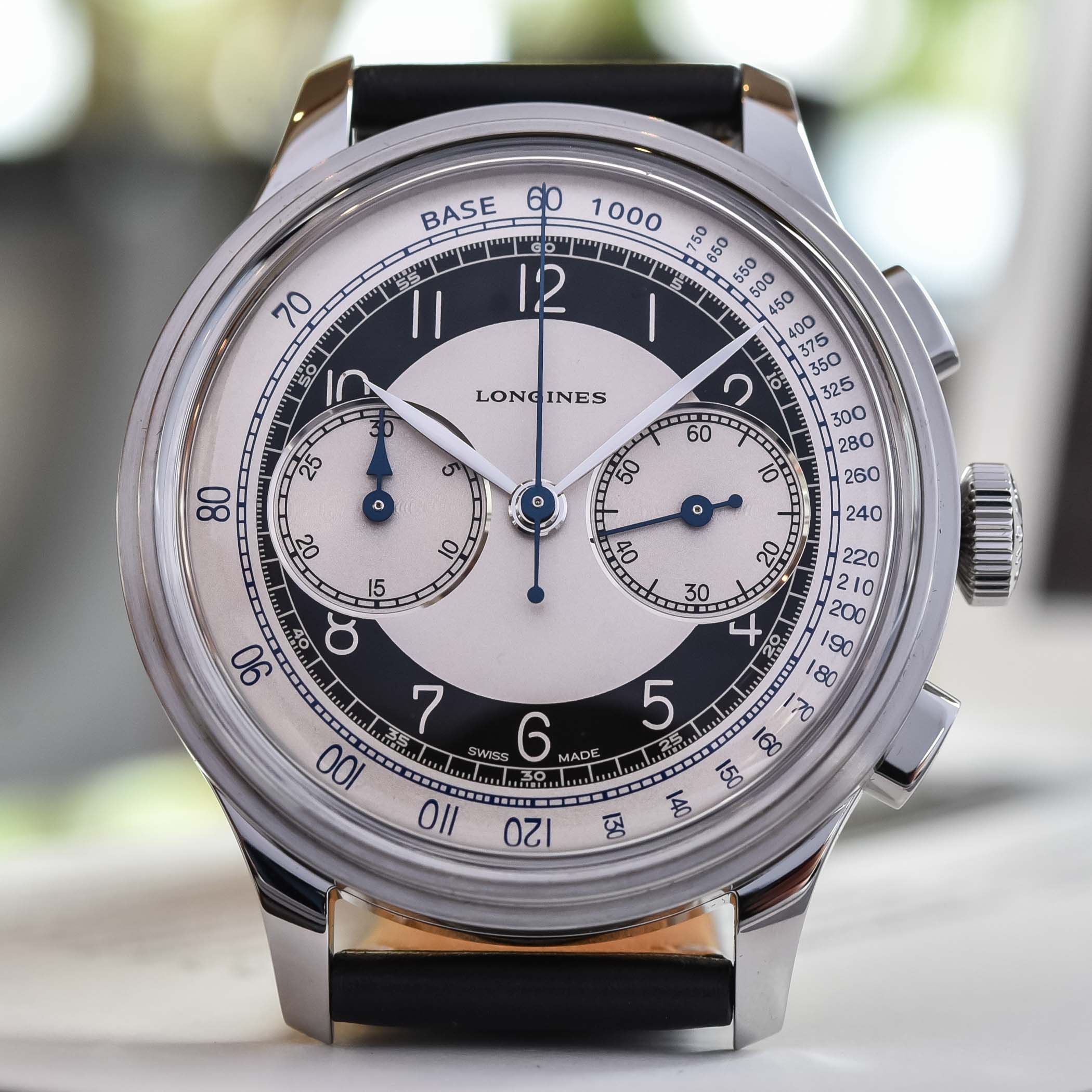 If the case of the Longines Heritage Classic Tuxedo Chronograph is already very pleasant, the dial is what gives this watch most of its appeal. First of all, Longines has managed to retain the proportions almost intact – mostly the position of the sub-dials – despite the larger diameter. Proof that a custom-built chronograph module can make the difference. Regarding the dial, everything has been faithfully recreated, minus the patina found on the 1943 model, explaining the silver colour of the 2020 Tuxedo watch. Fonts, tracks, colours, finishings… The work done by Longines here is rather impressive and results in a superb dial.

The dial combines a silver opaline surface with slightly grained texture, on which a black hour chapter ring with stylized Art-Deco Arabic numerals is printed. The dial is framed by a blue tachymeter scale, again faithfully reproduced. The slightly recessed chronograph sub-dials have a discreet concentric pattern and are framed by a metallic flange, creating nice reflections and sense of depth.

Hours and minutes are indicated by polished silver hands, with a leaf profile. Their execution is quite impressive, with a bevelled central canon – a detail for some but one that really caught my eyes. The other hands, for the central seconds and the sub-dials, are blued steel and retain the shape of the historical model. The only major difference concerns the reversed position on the small seconds and 30-minute counter. More than the respect of the original look and the beauty of the dial itself, what surprised me most is the actual execution, full of details. 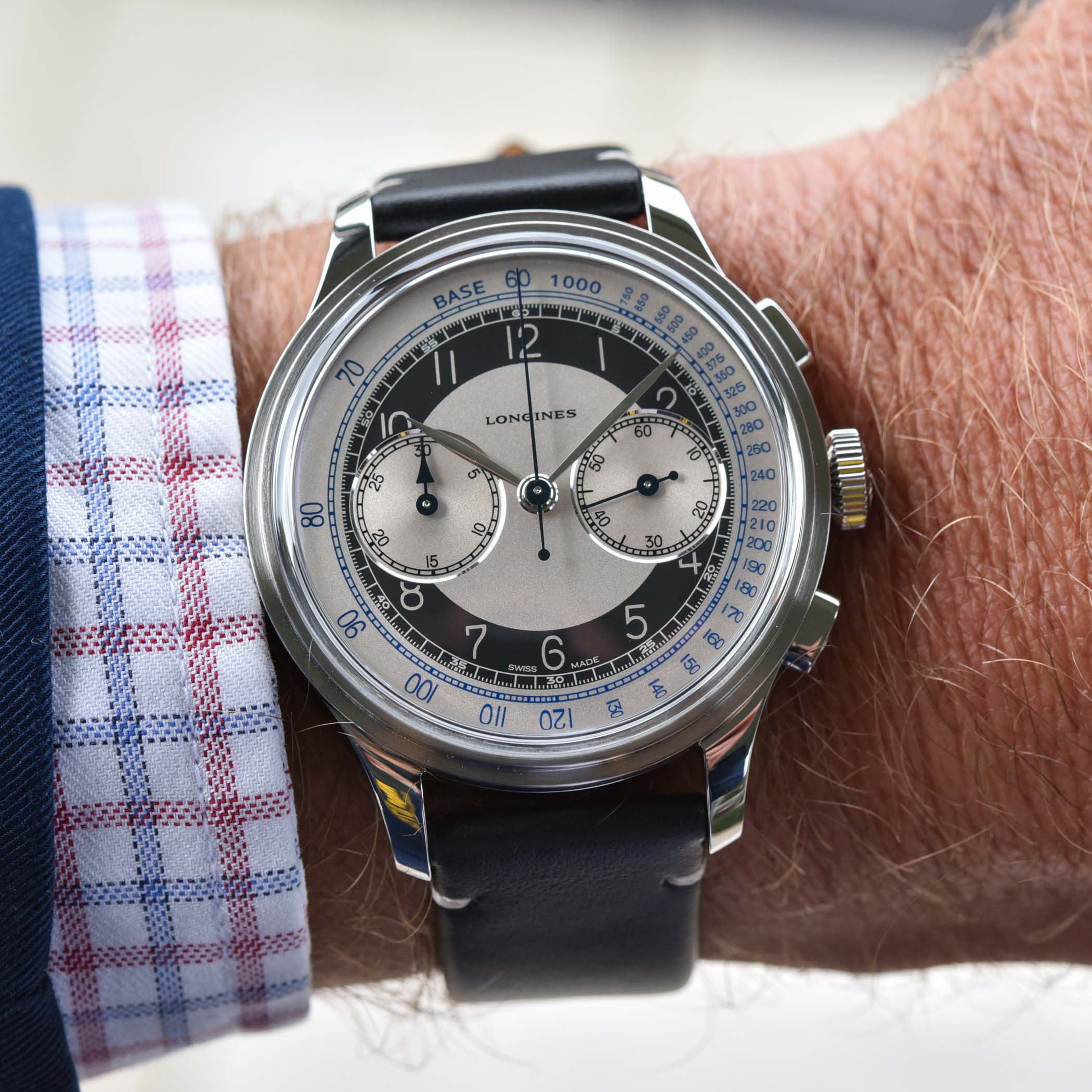 Under the solid steel caseback is a known movement, the calibre L895 (also named ETA A31.L21). Based on a time-only automatic ETA calibre, this movement is equipped with a purpose-built bi-compax chronograph module made by ETA for Longines Heritage watches – the space between the sub-dials is specific. Also, while the base architecture is known (ETA 2892), it has been fairly upgraded with an antimagnetic silicon hairspring (still with a 4Hz frequency) and a power reserve of 54 hours (instead of 48 hours).

In all fairness, the design of the new Longines Heritage Classic Tuxedo Chronograph is spot-on, with the right amount of retro elements, without falling in the “faux-vintage” exaggeration we sometimes encounter. Also, Longines has understood that such watches should have a no-date display, and this Tux’ makes no exception to the rule. Certainly, one could argue that the brand doesn’t take risks and has re-used an existing design. Sure, but when done in such a pleasant way, there is nothing to complain about a well-executed vintage-inspired model. Indeed, while the case is larger than the original, Longines developed some tricks to retain original proportions, such as thin casebands to avoid visual thickness or a specifically-developed module to keep the sub-dial spacing intact. 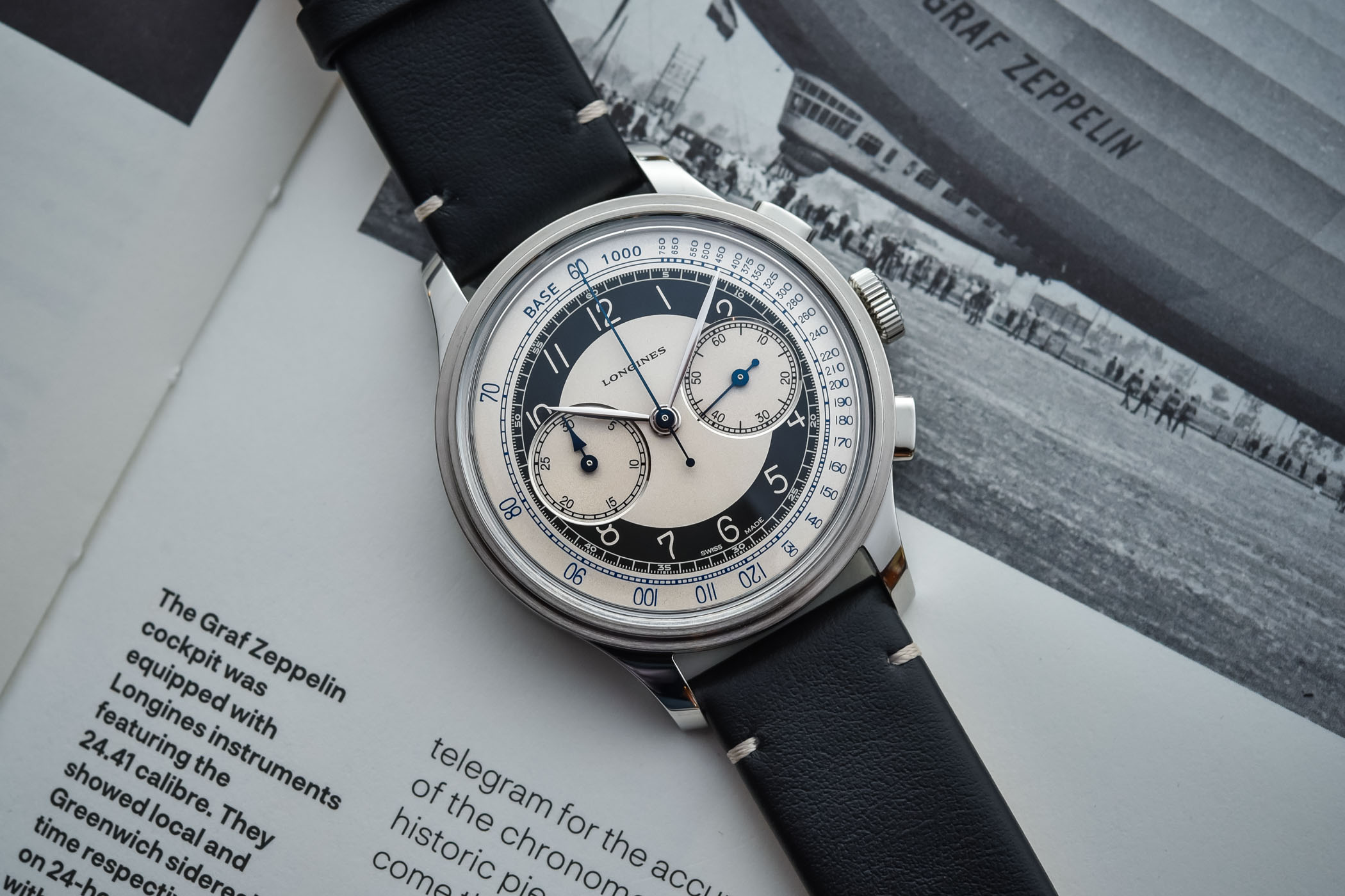 Also, the built quality and the attention to details is quite impressive – mostly on the dial – considering the price tag. For under EUR 3,000, you have a watch with a simple yet solid and well-assembled case, a movement with several technical advantages over the competition and a dial/hand combo that could have been done for a watch in a much higher price range. Altogether, one of the most handsome “accessible” retro-styled watches of the year.