The third ultra-thin tourbillon model to join Breguet’s Classique family in 2019, the reference 5395, is about as anachronic as they come. Unlike the former references, with their classic dials and large aperture for the off-centred tourbillon, this watch has been stripped of every last vestment. There is nothing, literally, between the spectator and the spectacle (ok, the sapphire crystal). This radical level of contemporary skeletonisation performed on an ultra-thin movement combined with a 220-year-old complication and hand-engraved Breguet touches is proof positive that Breguet has not got bogged down in the reproduction of past glories. The brand is alive and kicking and determined to showcase all its technical and decorative skills. Let’s take a closer look at the Breguet Classique Tourbillon Extra-Plat Squelette 5395. 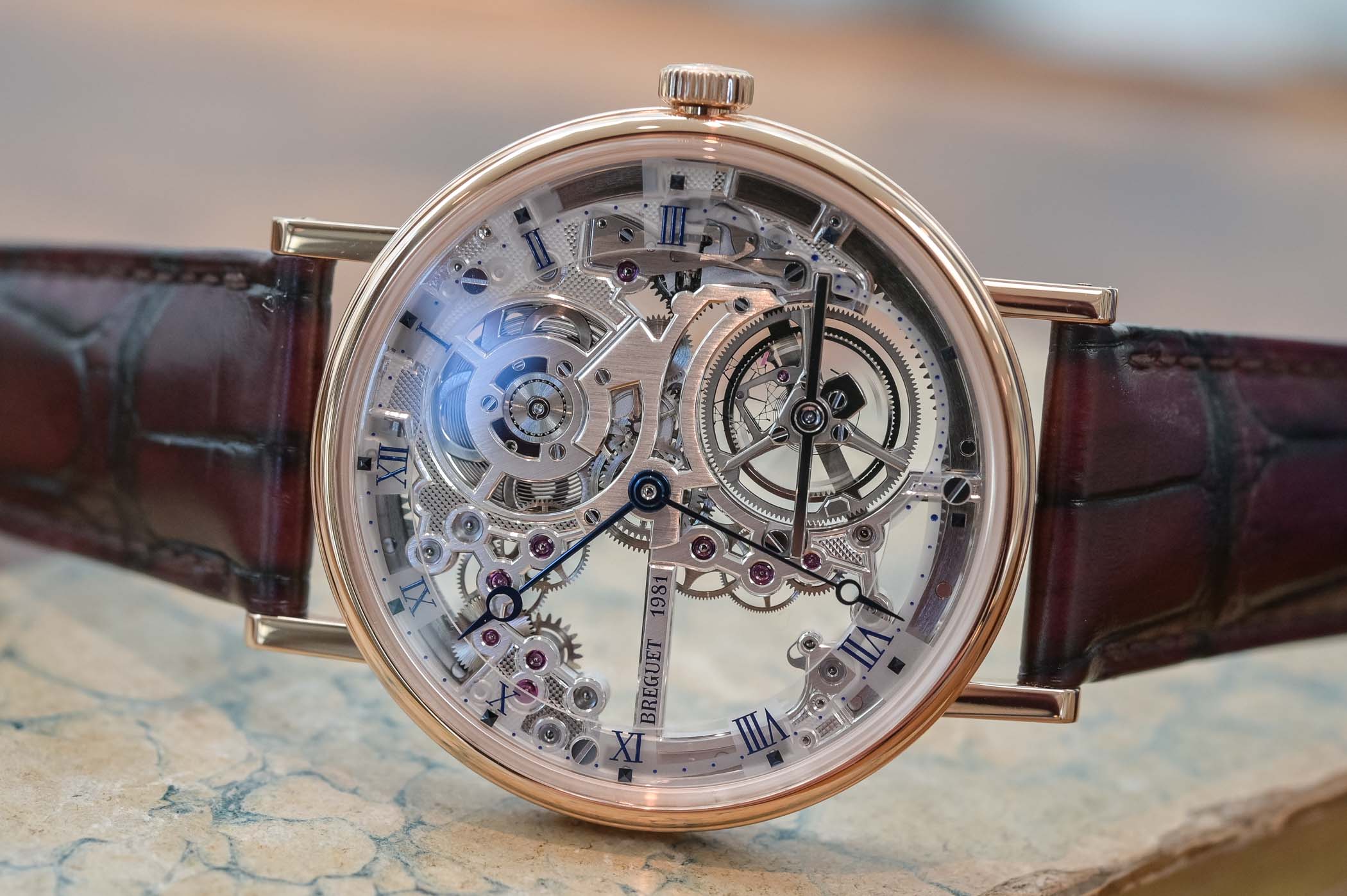 A wee bit of history

Abraham-Louis Breguet’s colossal reputation as the greatest of all watchmakers was not a retrospective attribution. It was consolidated during his own lifetime thanks to the fact that he introduced more innovations than anyone else working in the field and developed a unique design language for his creations. From the development of the perpetual calendar (1795) to the principle of the perpetual self-winding watch (1780), from the shock-absorbing para-chute to protect the balance (1790) to the regulating device he christened the tourbillon (patented in 1801), Breguet was also a precursor in brand identity marking his watches with design codes that are still enforced today. 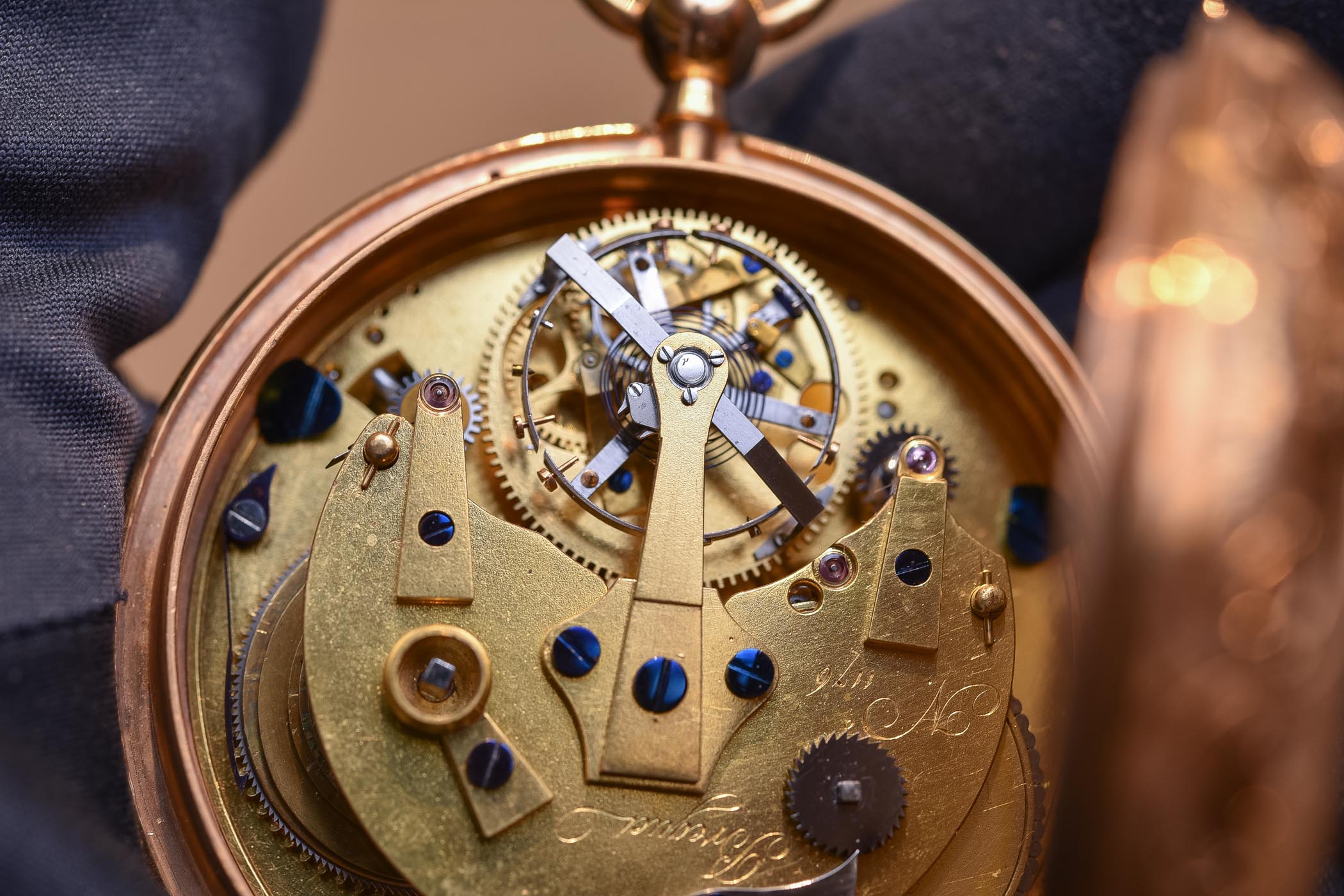 The four-minute tourbillon regulator on the Breguet No. 1176, one of the earliest watches with this regulator, found at the Breguet Museum in Paris. The basic principles of the tourbillon were already in place here. This piece was sold in 1809.

Abraham-Louis Breguet is one of the greatest watchmakers of all times… And modern watches with its name have to keep pace.

Abraham-Louis Breguet patented his tourbillon regulator in 7 Messidor, Year IX of the Republican calendar (26 June 1801). The idea for a new type of regulator was conceived in 1795. Realising that the gravitational pull was stronger on a watch in a vertical position – and the fact that most men placed their pocket watches upright in their waistcoat pockets – Breguet invented a system that would compensate for these forces, not eliminate them. By placing the entire escapement (balance and spring, lever and escape wheel) inside a mobile carriage rotating on its axis every minute, the errors or flaws were regularly repeated and mutually compensated. 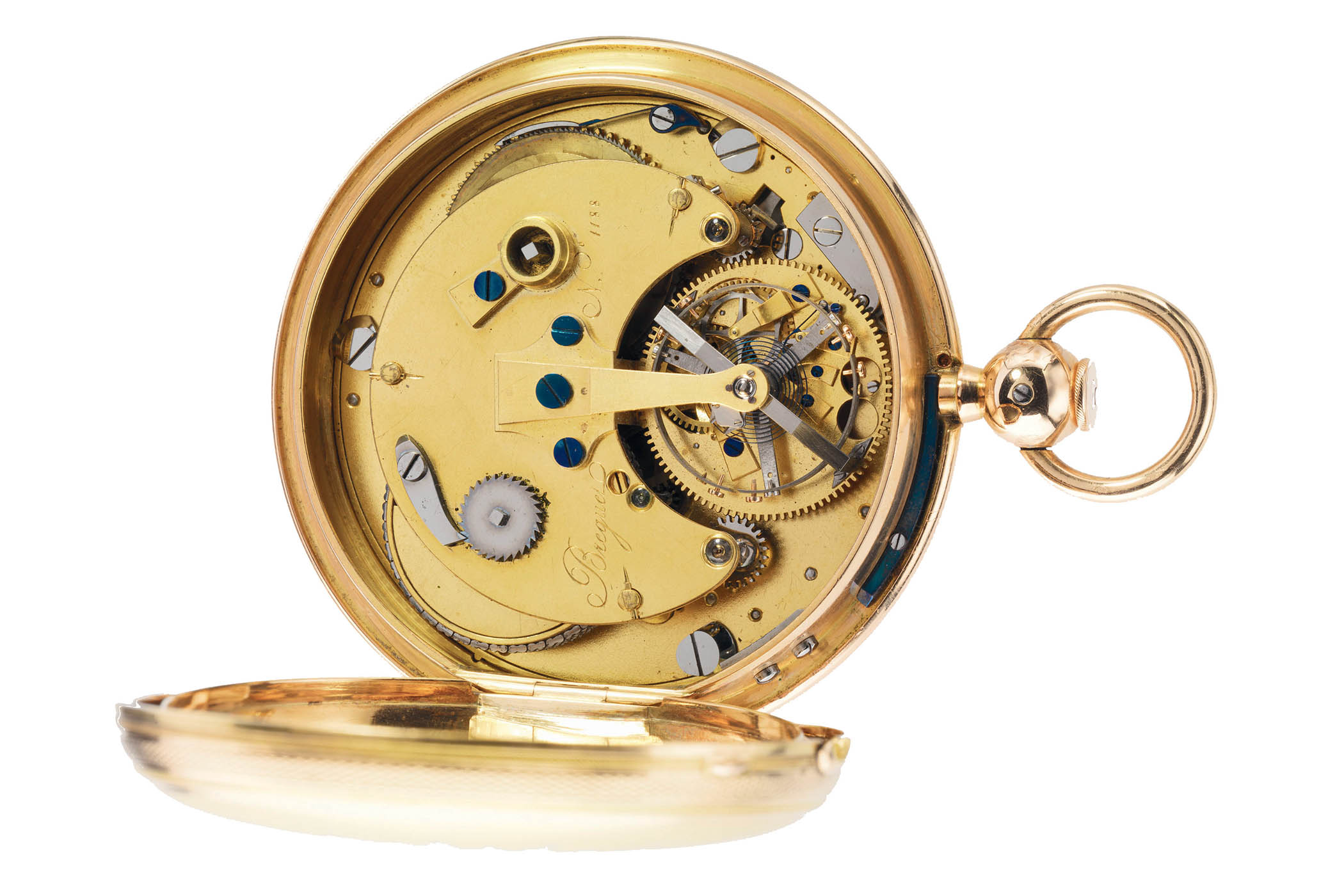 The Tourbillon precision pocket watch No. 1188, sold to Don Antonio de Bourbon, Infante of Spain, in 1808. Here again, the tourbillon rotates every 4 minutes. Originally delivered with a gold engine-turned dial, later replaced with an enamel dial with Turkish numerals in 1841.

Devilishly difficult to produce – it took him more than 10 years of R&D to get it right – Abraham-Louis Breguet didn’t commercialise his first tourbillon until 1805 and only sold 35 tourbillon watches in his lifetime. He did, however, give one of his experimental models – N° 169 – to the son of his good friend John Arnold in 1809 who had been working as his apprentice. 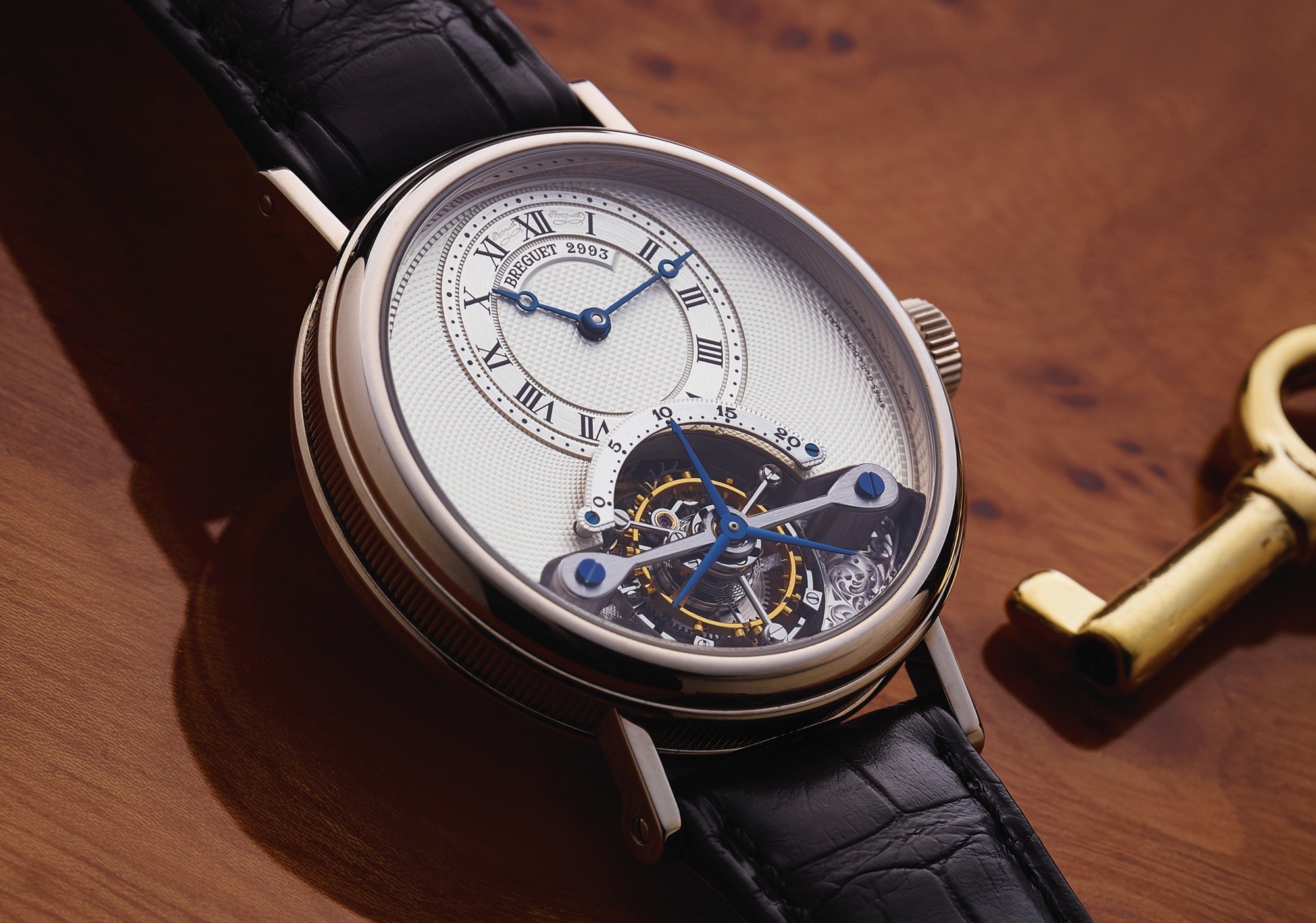 Little could Abraham-Louis Breguet have suspected that his ‘whirlwind’ device would enjoy a renaissance with the grand return of mechanical watchmaking in the mid-1980s following the quartz crisis. Honouring its rich legacy, Breguet introduced its first tourbillon wristwatch in 1988 – ref. 3357 – with a movement made by Nouvelle Lémania.

One of the ways Abraham-Louis Breguet managed to address copycats was to include a secret signature on the dial; it’s still used to this day. Calling upon the skills of his Swiss friend, Jean-Pierre Droz, a celebrated medallist busy minting coins and designing new Revolutionary banknotes, Breguet commissioned a dry-point pantograph of his signature. 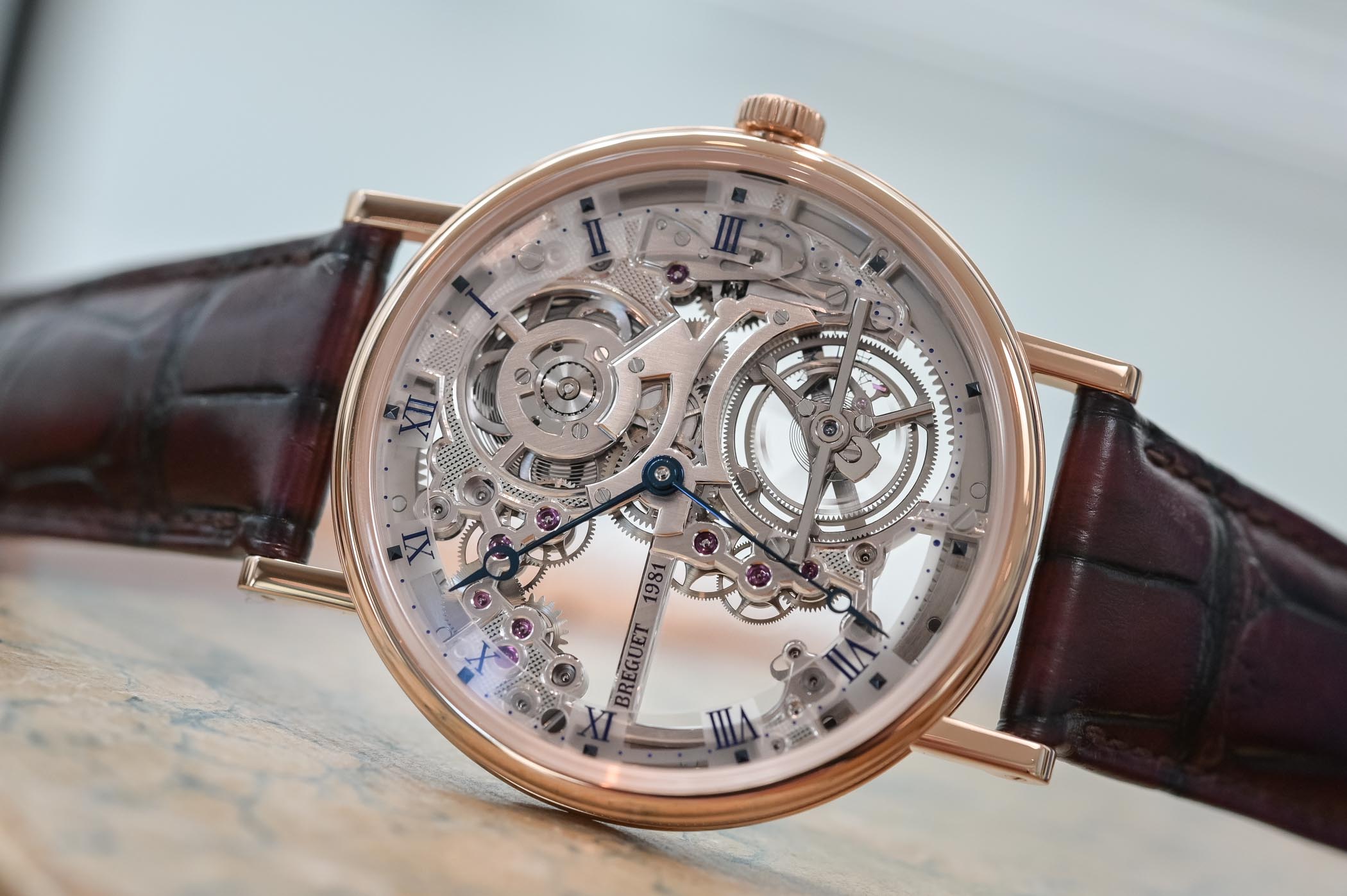 But he had an even better trick up his sleeve that would practically eliminate the possibility of forgery. The solution was ultra-thin watches. The extra-plat or ultra-thin wristwatch might strike us as something fairly recent – you can read all about the latest contenders in this article – but, as with so many horological breakthroughs, Breguet was the first to put slim elegant pocket watches on the market.

By making his watches as thin as possible, a feat requiring extraordinary skill and dexterity, his peers were doomed to failure. Contrary to the prevailing trends of the day for small, chubby, ornately decorated watches, Abraham-Louis Breguet’s watches stood out from the crowd with their minimalist neo-classicism and flat cases. Emmanuel Breguet, Vice-President of patrimony at Breguet and a direct descendant of the watchmaker, writes in the magnificent tome Breguet that his ancestor was the first to produce “very small watches with refinements, a field in which his rivals, imitators and plagiarists had great difficulty following him”.

Tracing the recent genesis of this Tourbillon Extra-Plat Squelette 5395, it is worth taking a look at the two former models: the Breguet Classique Tourbillon 5367 unveiled in 2018 with its sleek enamel dial and the original Classique Tourbillon Extra-Plat 5377 of 2014 with guilloché dial (and a power reserve indicator too). They all feature an eccentric tourbillon, they are all powered by the same self-winding movement with a peripheral rotor and they all feature signature Breguet decorations, but that’s where the comparisons end. The 5395 is naked, stripped of any form of clothing that might hide any of the individual players of this horological orchestra. 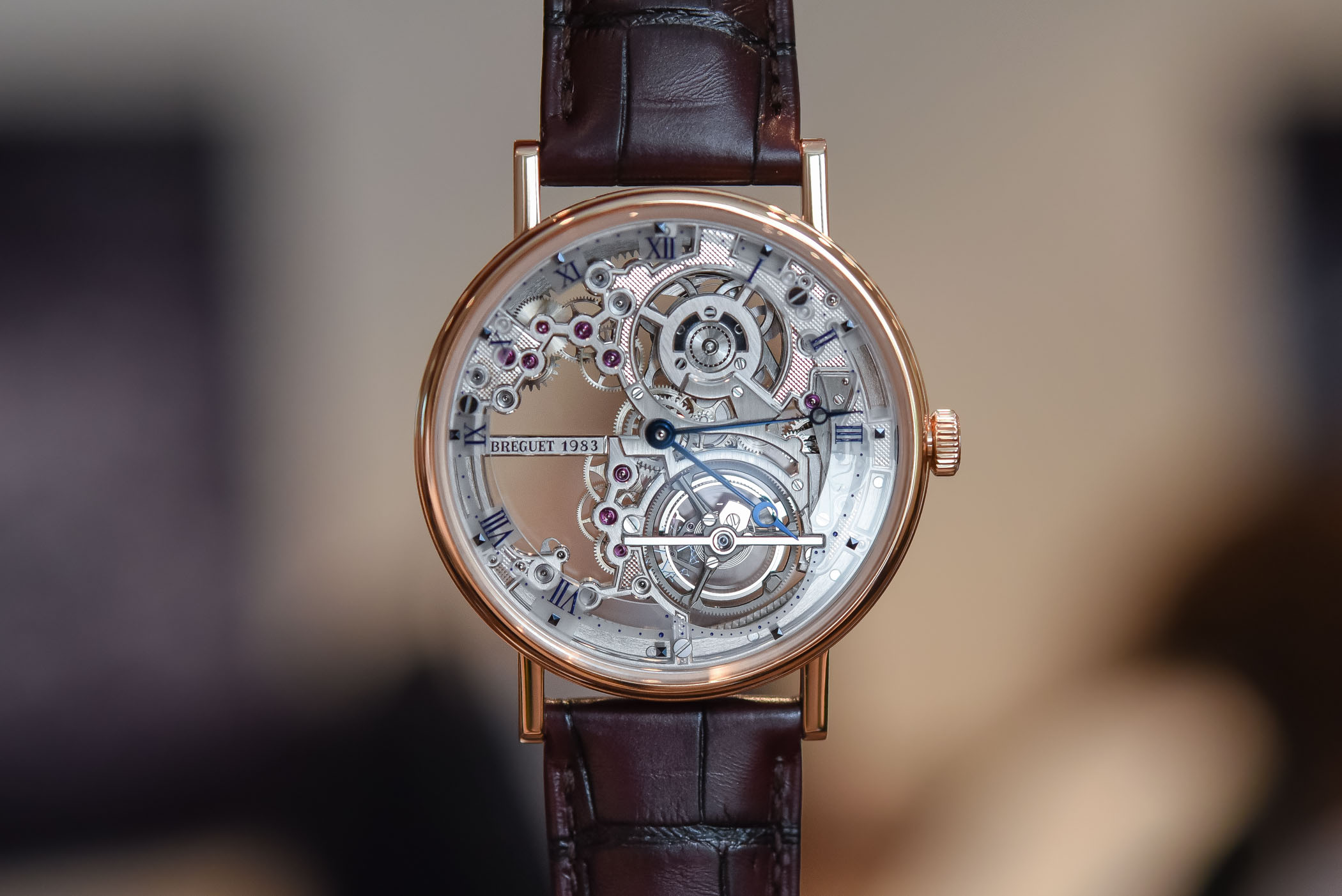 The 18k rose gold case of the 5395 measures 41mm in diameter and has a thickness of just 7.70mm – slightly more than the 7mm of the 5377 and 5367. The casebands are fluted and the lugs are soldered with screws, just like its full-dial siblings. It’s not the world’s thinnest tourbillon, that record is currently held by Bvlgari’s Octo Finissimo Tourbillon coming in with a height of 3.95mm, but what about that skeletonisation!

First reactions are important and mine was something along the lines of “wow, that’s a lot of skeletonisation for a classic watch“. In our video (at the top of this article) interview with Nakis Karapatis, the Vice-President Head of Operations at Breguet explains that 50% of the material in the movement was removed. And in deference to A.L. Breguet’s watch for Marie Antoinette, the mainplate and bridges on the movement are made in solid gold – also because this highly ductile material is more suitable for guillochage. 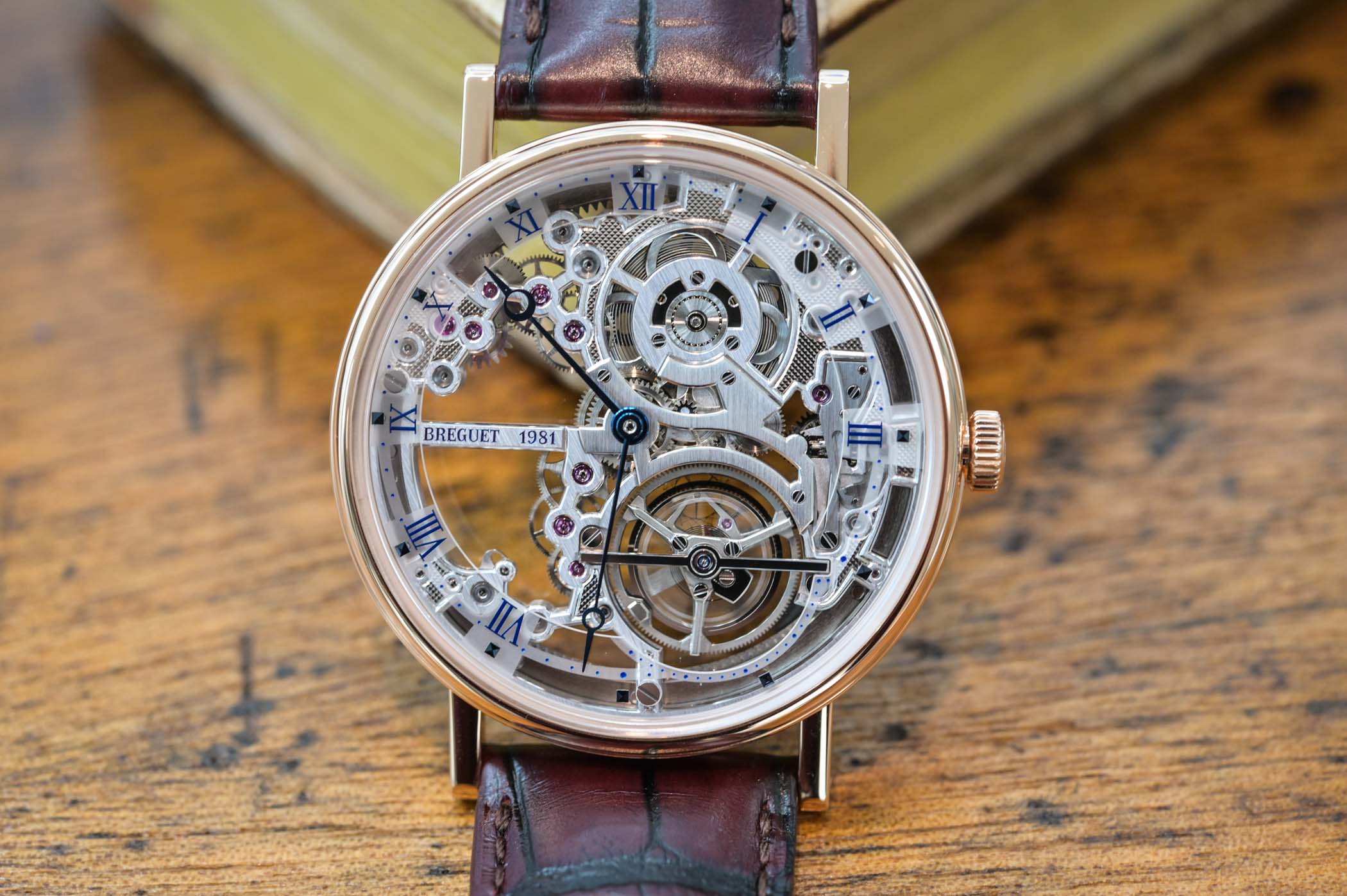 The first thing that will strike you is the large amount of empty space on the left side of the dial. Is it to prepare you for the action-packed horological spectacle on the right?  Take a deep breath and let’s get ready for a spin around the architecture of this remarkable watch.

The classic Roman hour numerals are black and printed on a raised sapphire disc that hovers above the mechanical extravaganza. Each numeral – they disappear between IV and VI – is crowned with a blued gold pyramid-shaped marker. Perhaps not the easiest chapter ring to consult, the idea was to avoid any possible visual impediment. The hands are also classic Breguet open-tipped in blued steel. 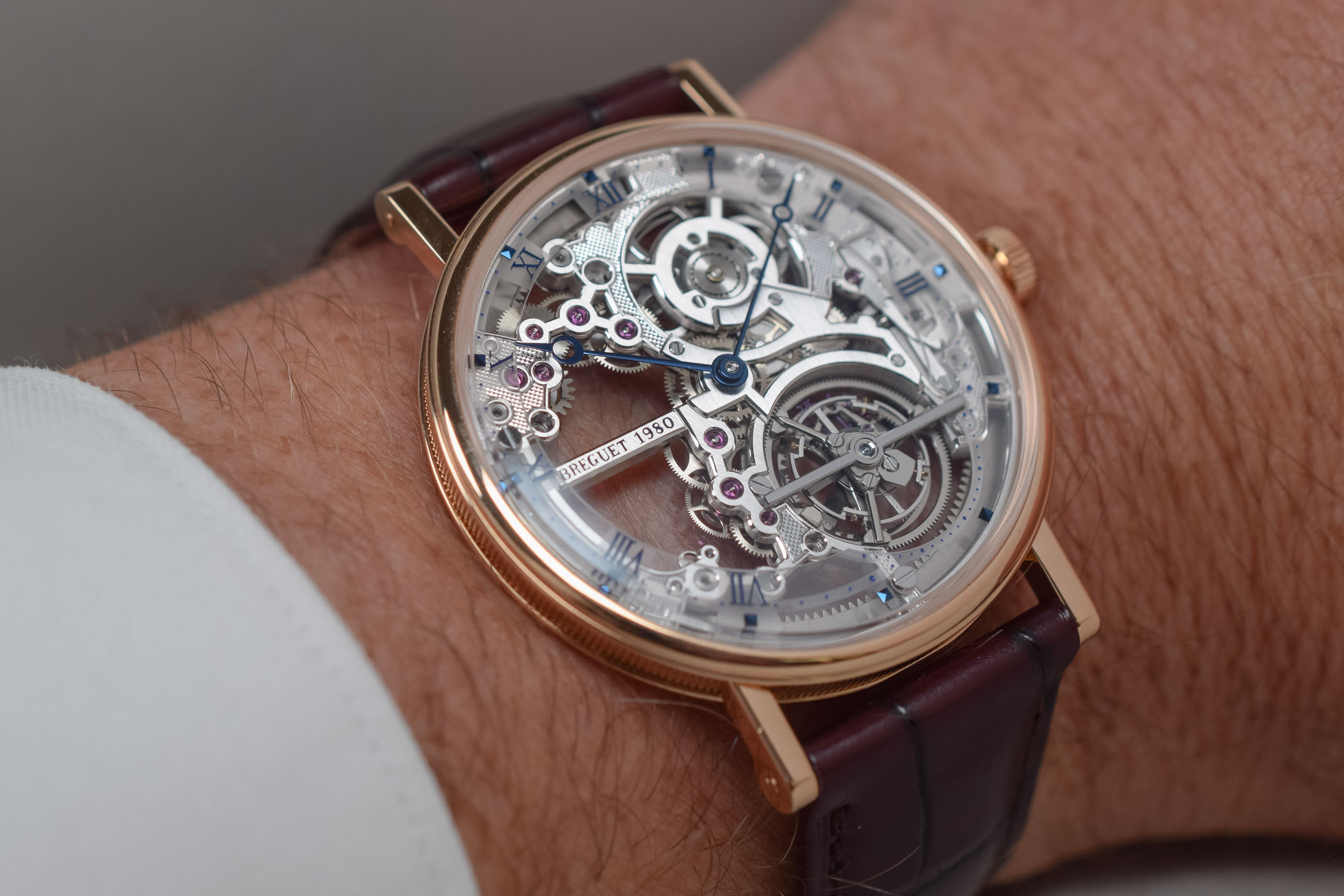 Two large apertures dominate the right side of the dial, the top one for the barrel and the bottom one for the tourbillon. Held in place by gold bridges with a brushed finish, the tourbillon had to be completely redesigned for this model. The titanium carriage – which weighs 0.290 grams – engages directly with the wheel train and to save on space, the silicon escapement has been given a distinct angled shape. If you amplify the photograph you can see a light blue spider web that corresponds to the escapement. 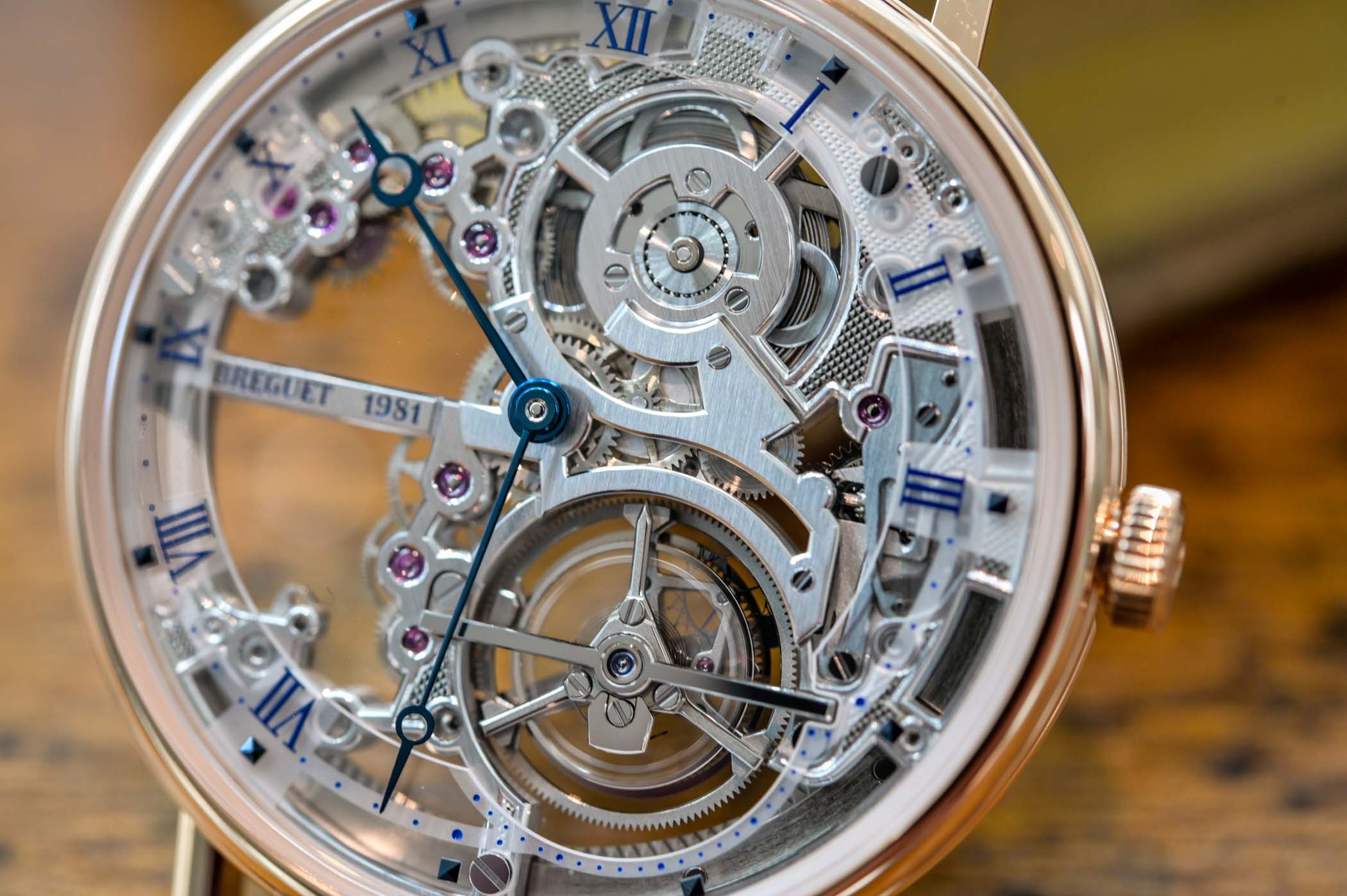 Moving back to the left side of the dial, you will see a series of circular apertures on the white gold bridges fitted with rubies. Apart from their vital function of holding the gear train and other components firmly in place, they provide a rich visual spectacle. 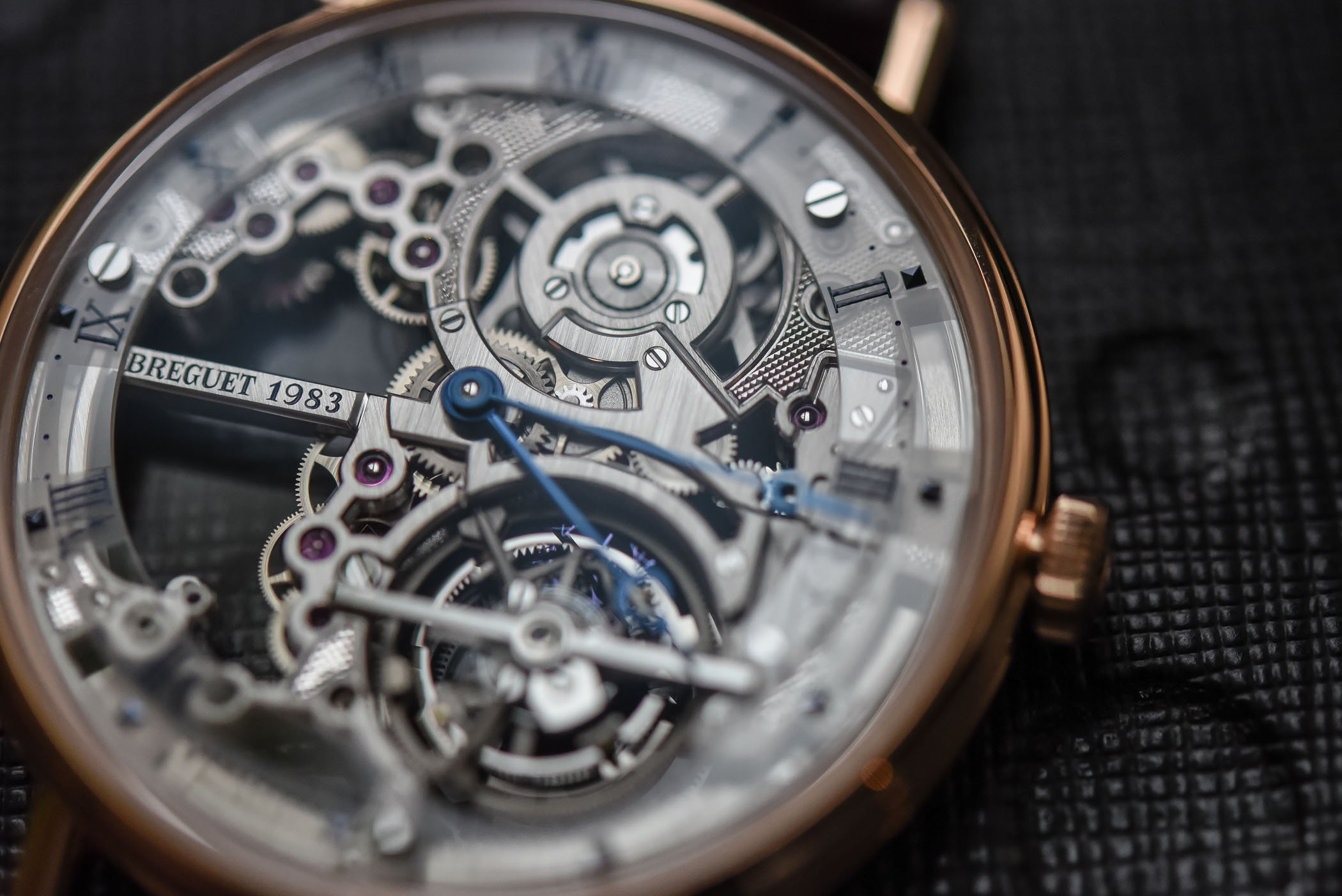 The reverse side of the watch is more ethereal than the dial. With no hands or chapter ring to distract from the viewing experience, the movement is revealed in full. Like the dial, the white gold bridges are formed with round apertures for the stones and screws and linked together like the perforated pieces from a Meccano set. The most dramatic of all is the bridge covering the barrel drum with its hollowed-out apertures. The serrated teeth on the periphery, along with the weighted platinum rotor, indicate the presence of a peripheral rotor, an ingenious way to keep the view as clear as possible and the height to a minimum. You can also see the reverse side of the titanium tourbillon carriage and even the lacy silicon escapement. 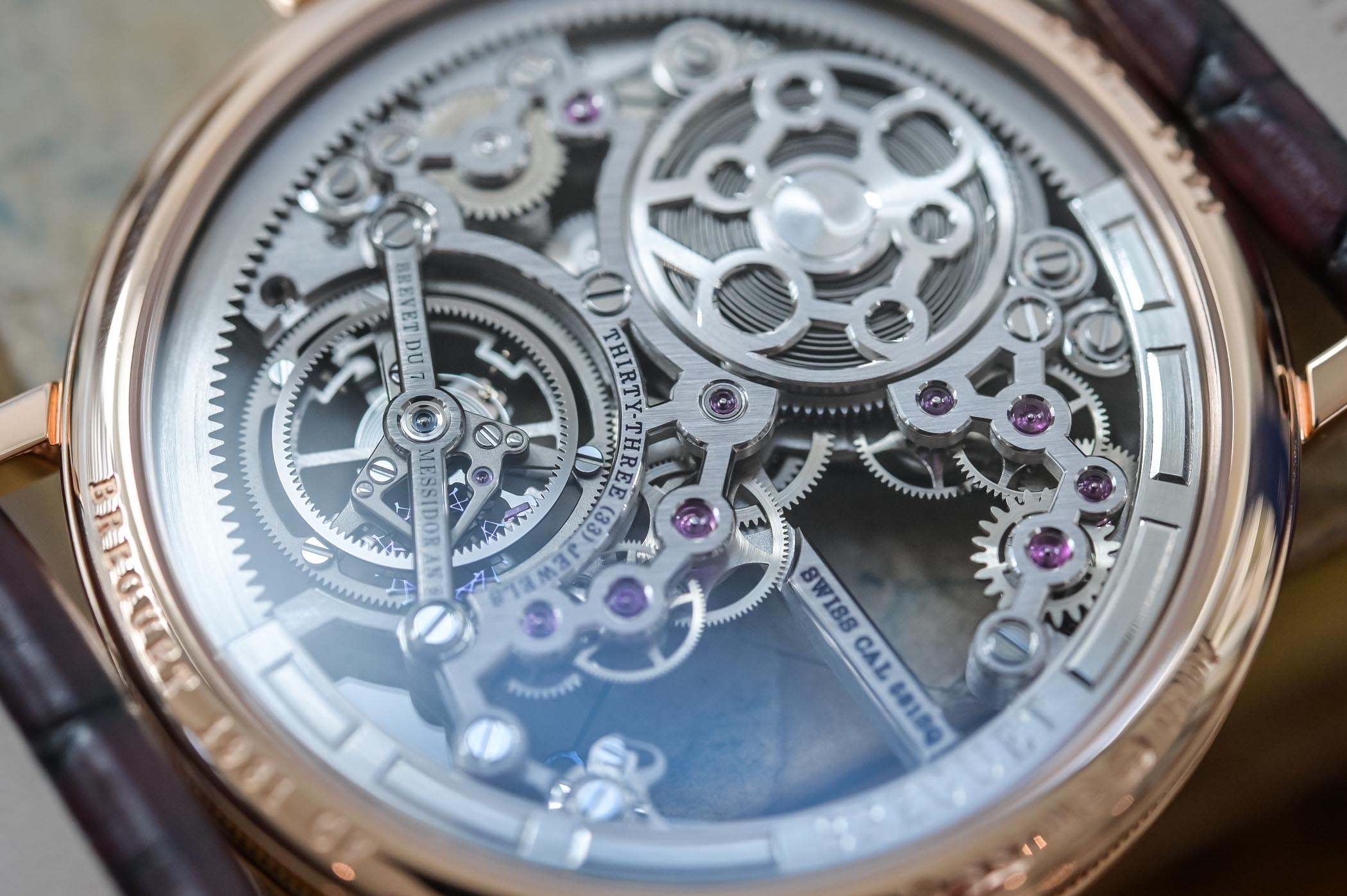 The level of hand-made decoration on this watch is simply astonishing… 100% Haute-Horlogerie!

With its radical, contemporary skeletonisation, it is easy to obfuscate the historical figure behind the brand. However, there are countless decorative features developed by A.L. Breguet that anchor the watch firmly in Breguet territory. The most obvious allusion is the use of hand-guilloché surfaces. One of the unmistakable signs, as explained by Emmanuel Breguet in this video and laid down by A.L. Breguet more than two centuries ago, is the use of guillochage, a decorative feature we strongly associate with the brand. However, this is the first time Breguet applies hand-guilloché decoration to the surface of the movement’s plates. Just below the brushed white gold bridges, a hobnail guilloché pattern made with a diamond-tipped guilloché tool can be appreciated on the plates. 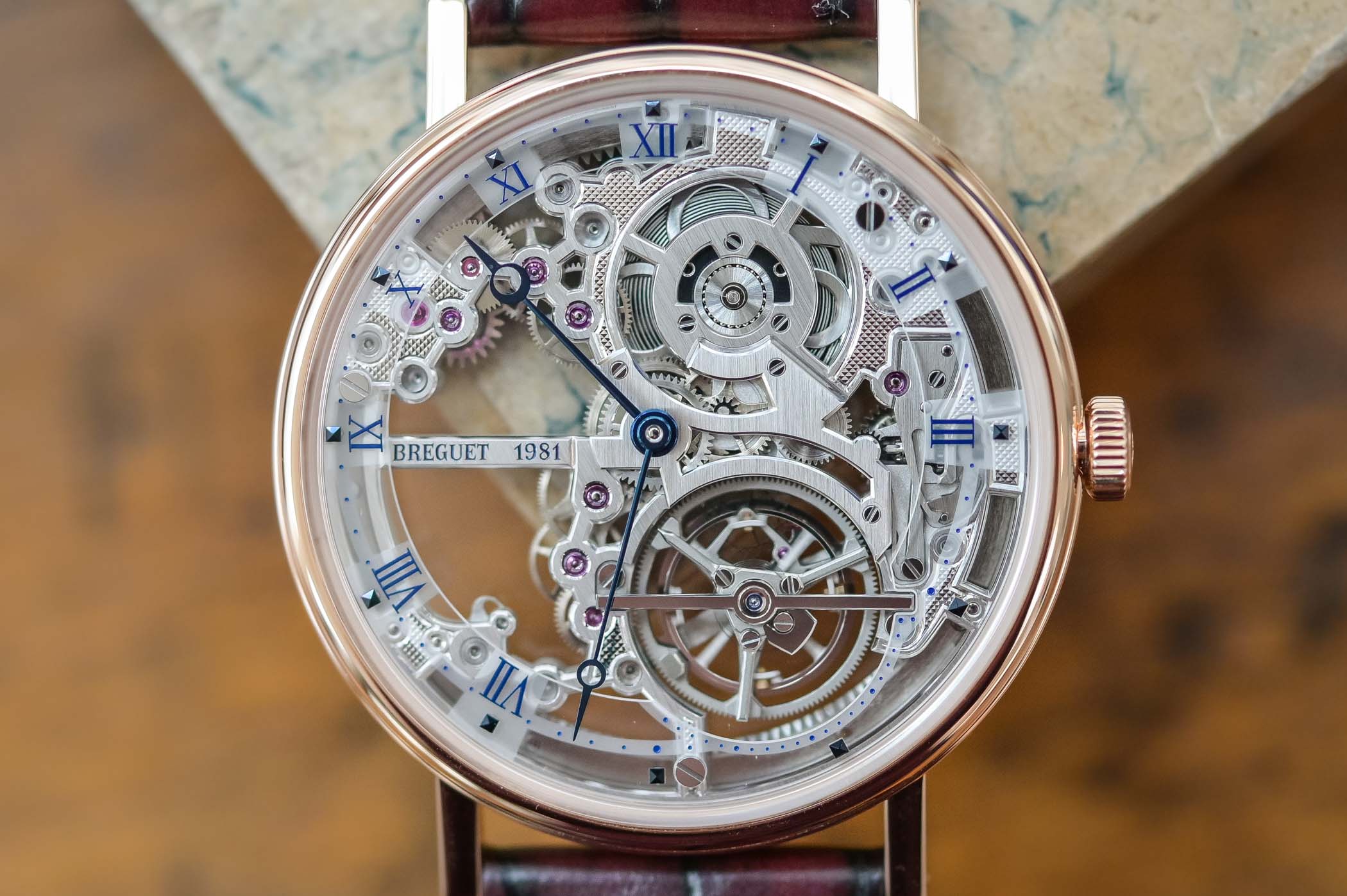 The sharp edges are chamfered by hand until a smooth 45° bevel is created. Equal care has been taken in the decoration of the reverse side with its brushed gold bridges. Just look at that hollowed-out bridge over the barrel drum and the spiralling decoration in the centre! All the engravings for the different inscriptions and the borders framing the holes are also done by hand, including the date of Breguet’s tourbillon patent engraved on the tourbillon bridge and the individual number of the watch engraved on the straight bridge that crosses the empty space on the left side of the dial. 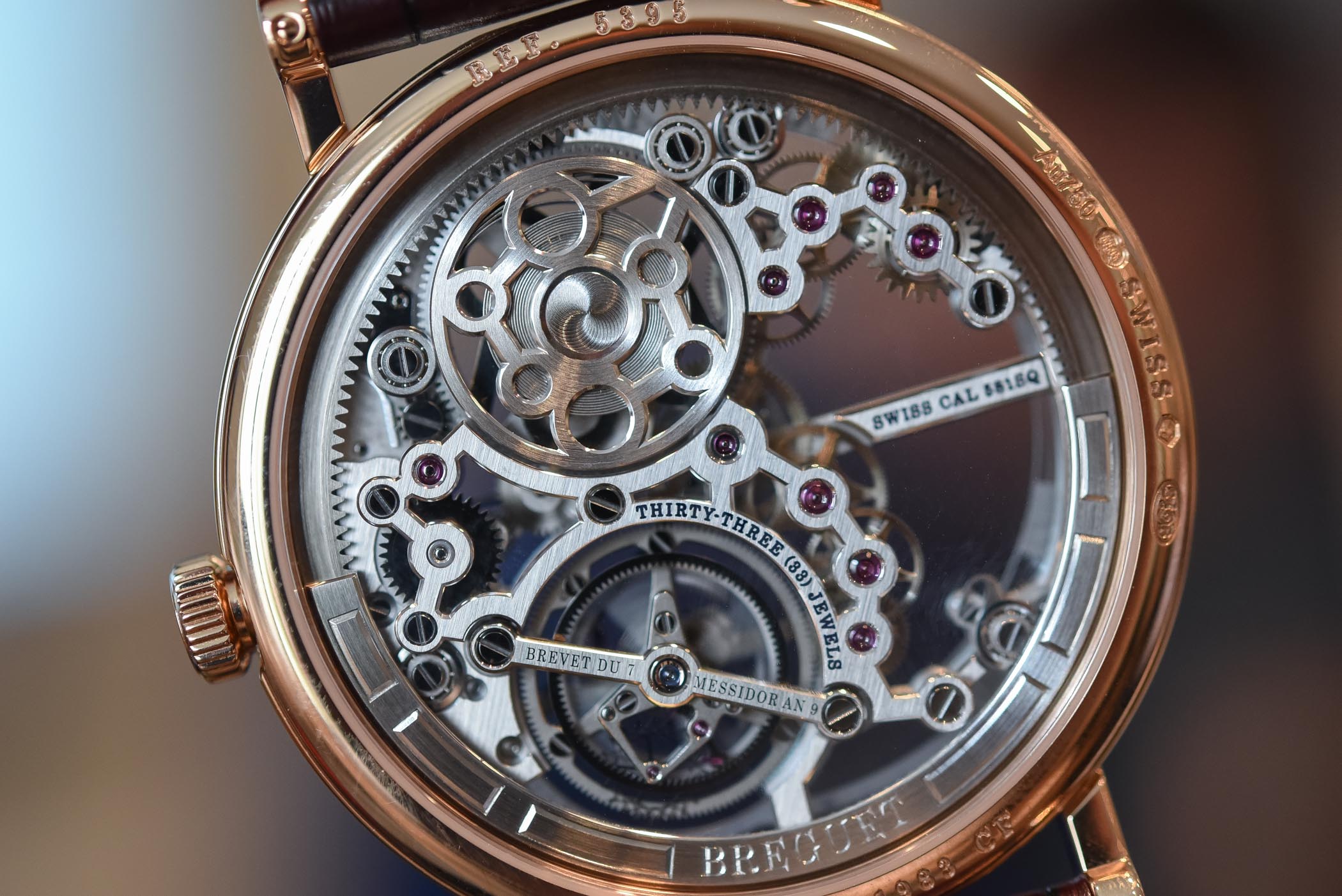 A movement we’ve seen before, powering the other two extra-thin tourbillon references 5367 and 5377, the ultra-thin calibre 581 bears the letters SQ referring to the squelette or skeletonised features of this watch. A prodigious feat of engineering, the movement of this Breguet Classique Tourbillon Extra-Plat Squelette 5395 has a height of just 3mm and its single barrel, mounted on ball-bearing rollers, provides a sturdy power reserve of 80 hours. The tourbillon beats at a high frequency of 4Hz offering better chronometry and is endowed with modern anti-magnetic parts like the lever escapement with silicon horns and the flat silicon balance spring. 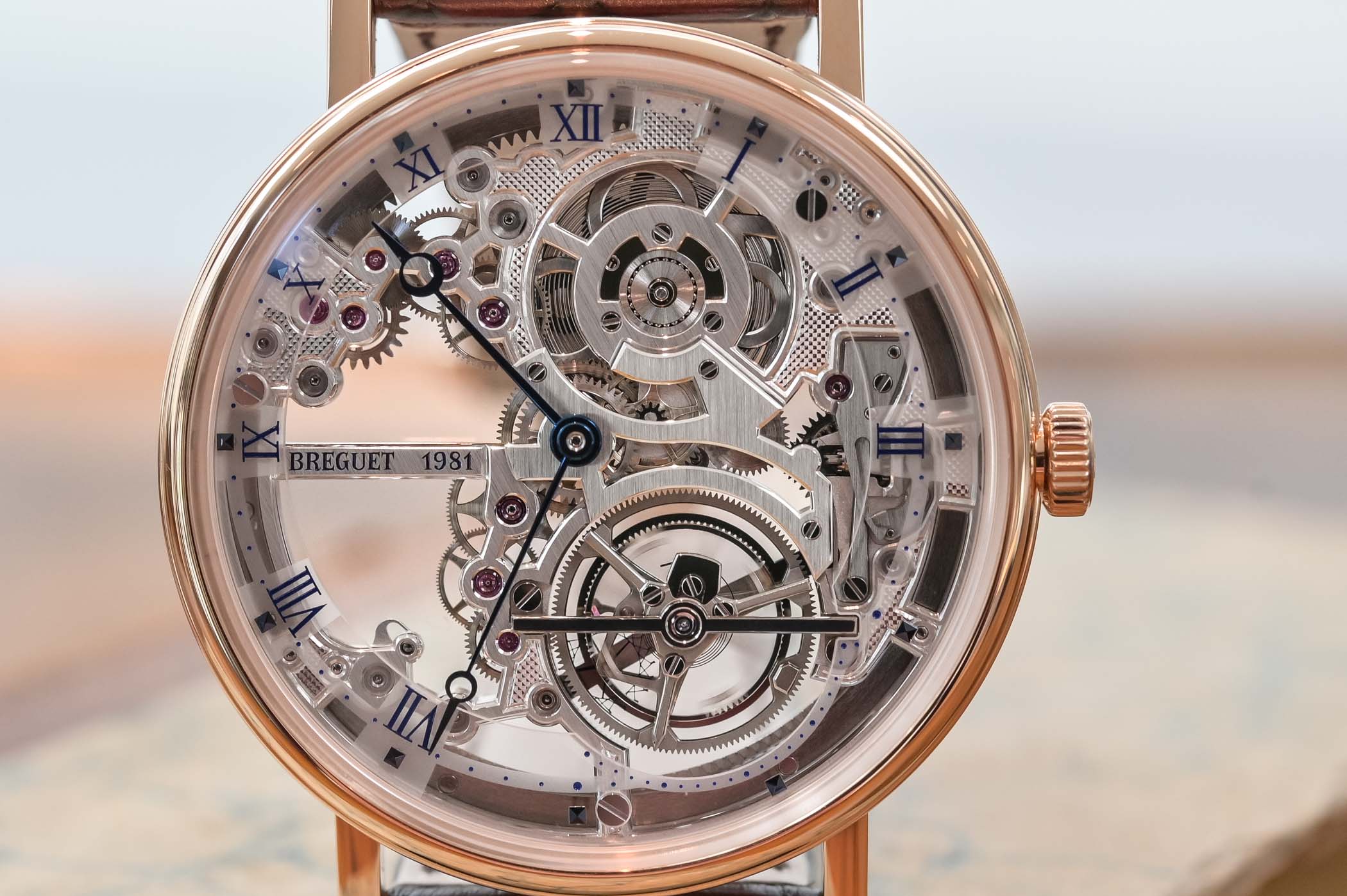 I have to admit that this extreme level of skeletonisation shocked me at first. It seemed dissonant with the classic spirit of Breguet and slightly outré. However, spending time with the Breguet Classique Tourbillon Extra-Plat Squelette 5395 changed my initial reaction quite radically. 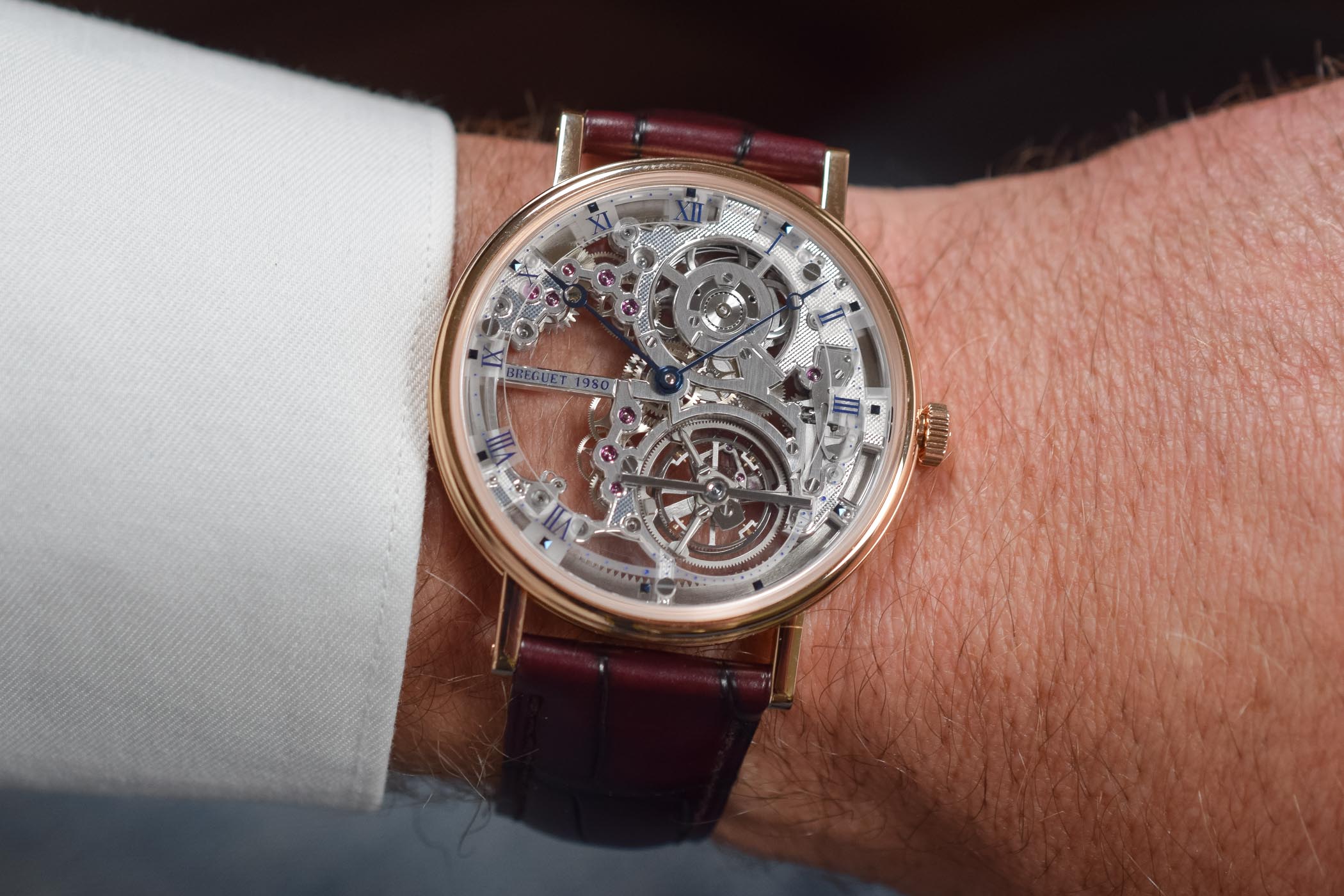 It is an anachronism of sorts, but a very welcome anachronism that showcases how old and new can live together in the same diminutive environment. The marriage of contemporary technology and materials (titanium, silicon) to a historic complication is a visual horological treat, but not exactly unique in the watch world. Where this watch differs from others is in the radical degree of skeletonisation achieved, its ultra-thin profile and the exceptional hand-engraved decorations of the movement. Once again, Breguet shows that the brand is not stuck in the past and is not afraid of taking its rich historic legacy into the future. The downside is that all this mechanical bravado comes at a price…

The Breguet Classique Tourbillon Extra-Plat Squelette 5395 we had for our review was the rose gold version (reference 5395BR/1S/9WU), although it also exists in platinum (reference 5395PT/RS/9WU). The rose gold watch comes on a brown alligator strap with a matching gold folding buckle and retails for EUR 219,500 (incl. tax). More information at breguet.com.