Here, at MONOCHROME, we adore watches. Mechanical, high-end watches, hand-finished. We’re not really the right platform to write about smartwatches, of even quartz watches – this is our editorial choice, and we’ll stick to that. But last week, Swatch introduced SwatchPAY!, and that is a big innovation. I actually believe that this new introduction could, in fact, change how a new generation looks at watches. Do you agree?

About two and a half years ago, I spoke to Peter Stas, CEO of Frederique Constant. They had just released their Horological Smartwatch and our talking subject was the usability of smartwatches. I argued that smartwatches needed more functionalities that would make everyday life easier. Like adding an NFC – or Near Field Communication – chip for contactless payments. This chip is about a square millimetre small and is also implemented in your bank card, allowing you to do contactless payments. Stas nodded, and had his answer ready, as he always has: ‘I know,’ he said. ‘We’ve been very carefully looking into that. But it takes a long time to do it right. The implementation is very difficult. You’re not only collaborating with electronics companies, but also with banks. The idea is very interesting, and we’re definitely looking into it, but it is not practically feasible at the moment.’

In the summer of 2017, when I wrote that article, Swatch already was working on its first experiment with paying with a watch. They collaborated with a Chinese bank, but the technology was slightly different than the watch they released this week. The Bellamy, as that watch was called, used UnionPay’s cloud-based payment method, requiring one extra step. Still, that experiment proved to be successful.

Later, I also asked Jean-Claude Biver the same question, when TAG Heuer launched its connected watch. He also showed great interest, but came up with more or less the same problems and one more: Intel couldn’t guarantee 100% safety, prompting Biver to not take the chance. He also noted that it would take a while, but the time would come that paying with a watch would become possible. And that time is now. 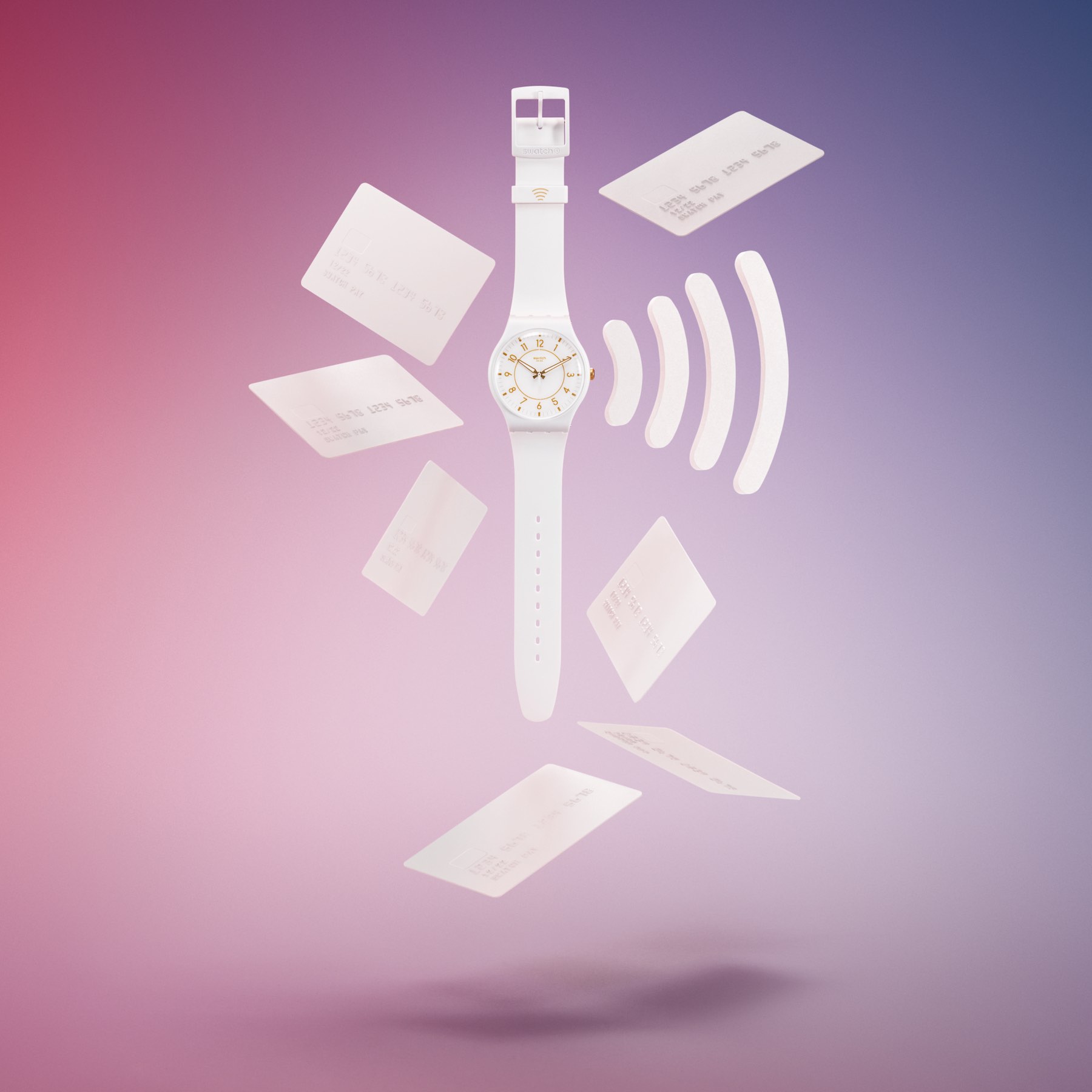 It took one of the biggest watchmaking groups in the world two and a half more years to finally implement the NFC in a watch. This week, Swatch launches SwatchPAY! in The Netherlands, collaborating with two different banks, ABN AMRO and Rabobank. China and Switzerland have had similar introductions in the past weeks.

Swatch is not really the first to experiment with this technology. For example, Mondaine already did it as well. That didn’t really become a success, but let’s be honest, Swatch is just immensely more powerful and has the persuasiveness to get the big players on board.

And that means that the sheer size of this introduction is impressive. Mastercard is on board, for example, and German company Giesecke+Divrient, which provides solutions to secure payments, identities as well as digital security and connectivity. Quite a lot of banks have made paying with SwatchPAY!possible, such as Cembra Money Bank, Cornercard, Credit Suisse, Swiss Bankers, Swisscard, UBS and Viseca. These are all Swiss banks, but more banks are definitely following.

Safety concerns are minimal, said UBS Bank in a statement: paying with SwatchPAY! is “just as safe as paying with your credit card”

Obviously, Swatch itself is very proud of its introduction as well. “Continuous innovation is a key strand of the Swatch DNA,” said Carlo Giordanetti, Creative Director at Swatch. “This latest advance, with the introduction of the fastest and simplest tokenization, makes it easier than ever to pay “forever” – token up your Swatch, swipe it and you’re done. SwatchPAY! is simple, stylish and swatchy.”

Payments are made possible by the NFC chip, which is located on the back of the case. In a ring around the bezel, the watch has an antenna that catches the radiation, connecting the chip with the payment terminal. This is exactly the same technology as your bank card uses. You can activate your watch with your internet banking system. Setting this up costs about ten minutes. SwatchPAY! uses a method they call tokenization, which creates a unique “token” for the device. Simply store your credit or prepaid card on your smartwatch via the app (activation of SwatchPAY! watch in Swatch store) – the app is available for iOS and Android.

Apparently, as you can see below, it’s practical… Swiss sense of humour!

It is a passive technology that does not require a data connection or even a paired smartphone, but one that functions like other mobile payment systems: just tap your watch on the payment terminal and the transaction is done. There is no need to activate the chip or to push a button like with smartwatches.

This means that the chip doesn’t require power either, eliminating the potential battery draining that smartwatches suffer from. The supplier of the technique, G+D, said in a statement that the watches use its own wearable enablement platform and wearable app.

Blocking the digital credit card is obviously very easy as well with the provider’s app. 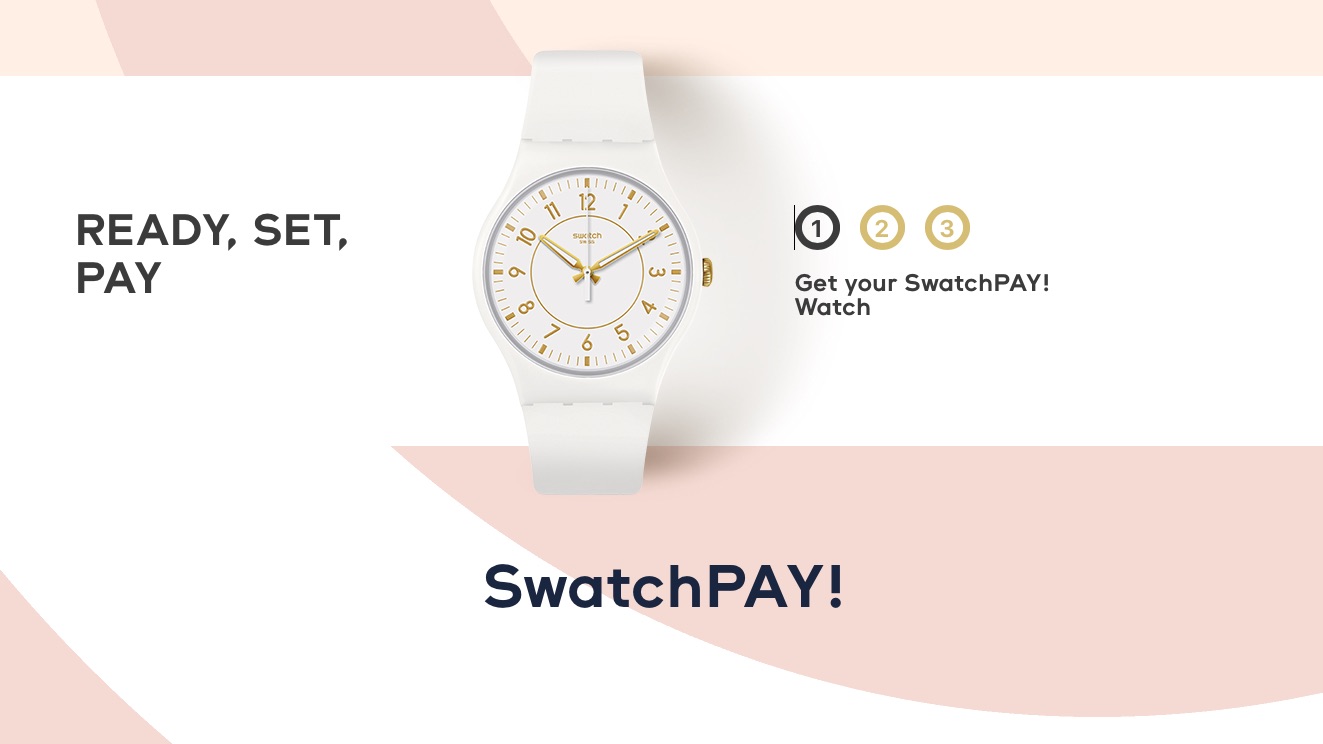 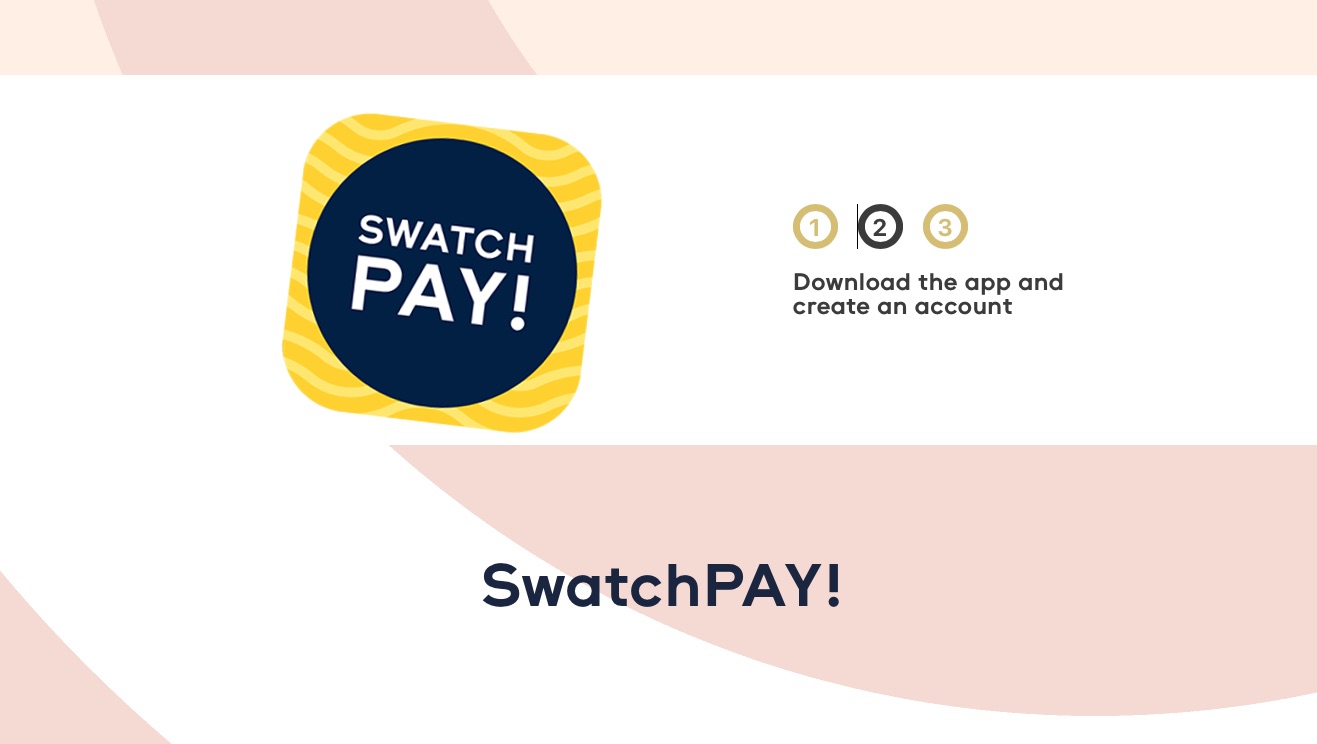 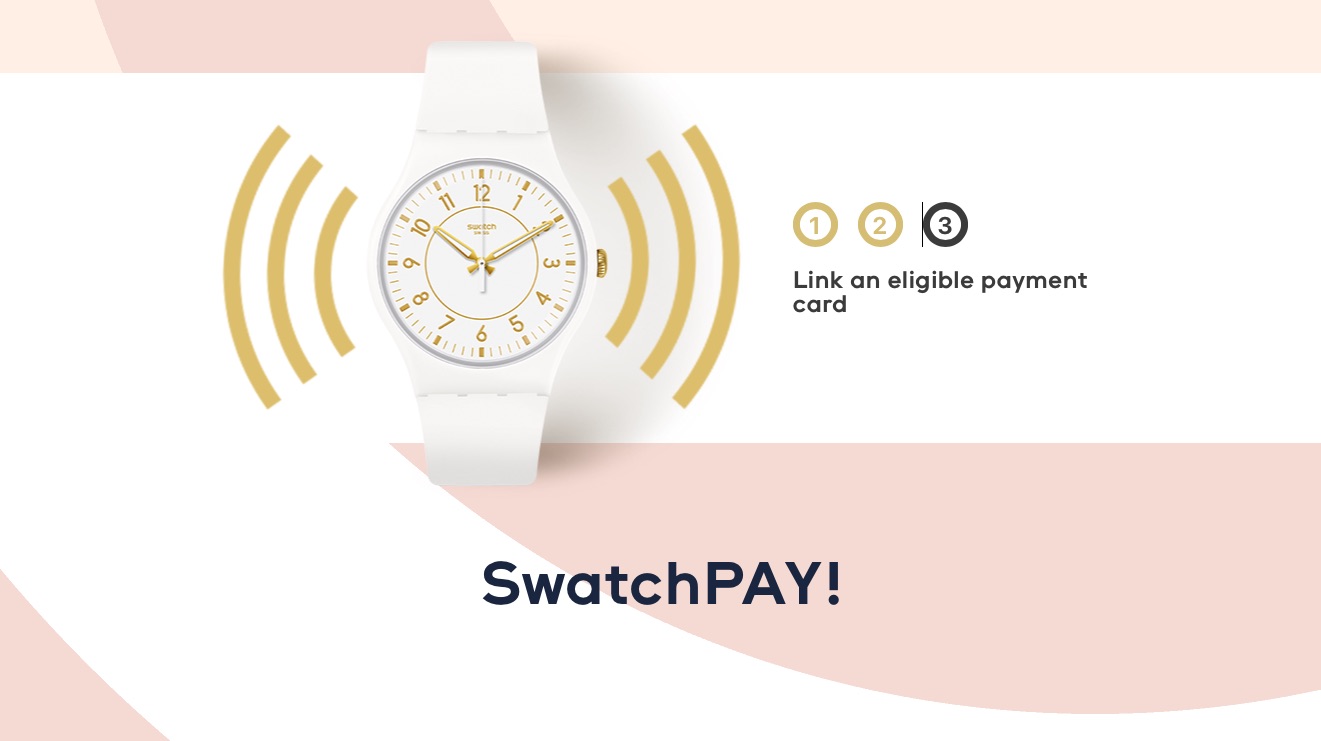 One of the biggest benefits of SwatchPAY! is that it’s all linked directly to your bank account, so you don’t need to top up a pre-paid card. It does require some setting-up, the same way you would activate your banking app on your smartphone.

For all the rest, the watch is just a normal Swatch as you know it. So no further smart functionalities. It comes in four different versions, all based on the existing New Gent-models All four come in very Swatchy colours, like bright blue or the classic black and white. Obviously, the case for a Swatch is plastic, but if you have a steel case, the chip should be implemented in a different place, for example, the strap.

SwatchPAY! and the watch industry

As I wanted to be sure of what I am writing, I took the time to try it for myself with the question: does this improve my life? The simple answer: yes, it does. Whether paying at a bar with your hands full of glasses or going to the market on a Saturday morning, everything is just slightly easier if you’ve got your wallet right on your wrist. A Swatch spokesperson also told me they expect one target group particularly interesting for SwacthPAY!: children. “For parents, it’s always difficult to send their children out with a credit card. With SwatchPAY!, it is going to be easier. Just send them out with the watch.”

Swatch now took the very big step to develop the right apps and signing the right contracts with the right parties, and that gives them a huge advantage. But if the big tech companies aren’t sleeping, they will do the same too.

All of that will hugely enlarge the market for people wearing watches, be it in Swatch- or smartwatch-form. And that, as Swatch has proven before, could save the Swiss watch industry once again. It is not yet clear whether Swatch will share its tech and contracts with other watch brands, but obviously they could, and make extra income out of it.

The big question is obviously: how will this affect the watch industry? I honestly think this could be a big gamechanger, especially for smartwatches. It is scalable, it’s cheap, it’s easy to produce and very useful. I honestly think to pay with your watch is endlessly more useful than measuring your heartbeat or reading your email on your watch. It is also a bit safer than flashing out your wallet in bar.

Therefore, I do believe this is going to change the way people pay. It also makes watches useful again. In the long run, it could even change the way people, especially a younger generation, are going to look at watches. Smartwatches, in general, will become far more useful with this technique. I am not sure it will affect the more expensive ‘real’ watches we love so much, but I do see possibilities there as well. If a watch manufacturer just implements the chip in a watch strap, no-one will ever see it, but it does add great functionality to your luxury watch. It is even a great opportunity to show your great watch to the people around you while you’re paying in – for example – a bar.

A big next question is mainly how the big tech companies will respond to this news. Until now, Apple and Swatch have not proven to be competitors. Industry analysts also pointed out that this is a so-called ‘dumb’ watch, with no ‘smart’ functions or connectivity possibilities. So for this watch, Big Techs are not yet afraid. But they sure do follow the progress and will definitely step in as soon as they can smell success.

Of course, NFC chips can be added to everything, including your phone, but the great thing about a watch is how close you wear it to your skin and how conveniently close to your hand it is. Making a payment with your wrist with no buttons to push at all is just way easier than flashing out your wallet. Besides that, phones are easily lost or forgotten, and a watch is rarely left behind because it’s just strapped to your wrist all the time.

And if you are one of them who says ‘who cares, flashing out my bankpass is easy enough for me’, I’d say that you might have been one of those who years ago said: “why would I need my email on my phone?” Paying with your watch is just easier, and our world love easy things. 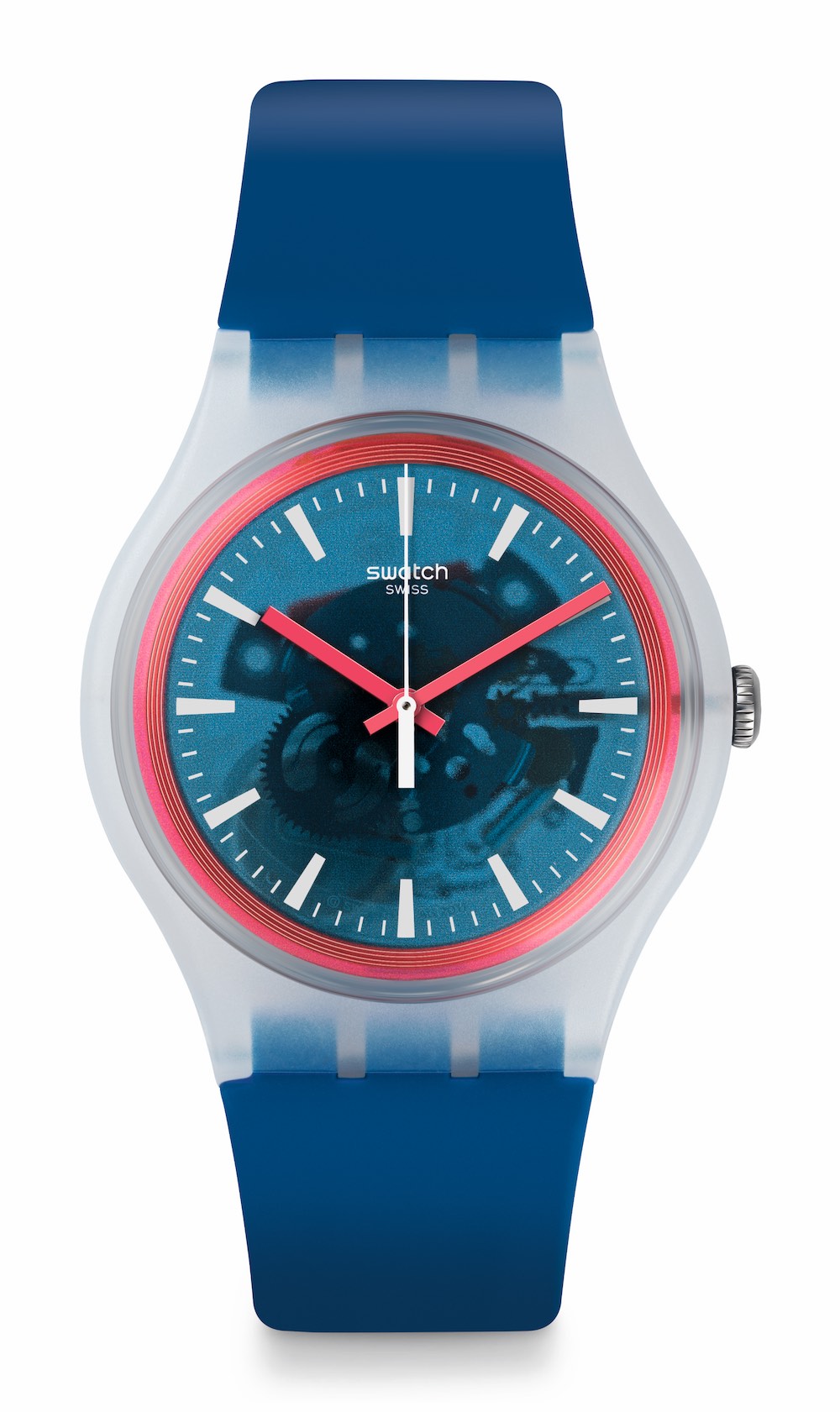 If you still are not convinced, picture yourself on a tropical beach somewhere. Because you are on the beach, you safely left your wallet and your phone in your hotel room. You’re enjoying the sunshine and suddenly you feel like a refreshing cocktail. You look at your watch, and you realize it is 5 o’clock somewhere in the world. You walk up to the bar, order, flash your watch, and walk off again. You lie down in the sun again, and taste your drink. Nothing in the world can bother you now. And all of that within a CHF 85 watch…