StartBloggers CornerJust Because – The M.A.D. EDITION 1, The Accessible Watch By Max...

Just Because – The M.A.D. EDITION 1, The Accessible Watch By Max Büsser That You’d Want to Buy… But Can’t!

Talk about making a “thank you, dear friends” kind of statement! Offering your superb creativity in a watch that is FAR less costly than everything else you do, and only making it available to suppliers to your brand, close friends and selected collectors. That is what MB&F’s founder Max Büsser just did, and it has been creating quite the buzz! So, what gives, Max? Are you going to leave us out here, in the dark like that? Or is there something more to expect from this obviously very cool, yet accessible M.A.D EDITION watch?

In essence, the clue is in the name of the brand; Max Büsser & Friends. The “& Friends” part is very important to the MB&F team, as well as Max himself, the founder of the company. In all the years we’ve worked with MB&F one thing stands out, and that is the close friendship he builds with people that are important to him. Friendships without which he would not be able to do what he does best. And that offers out-of-this-world haute horlogerie with extravagant creativity. 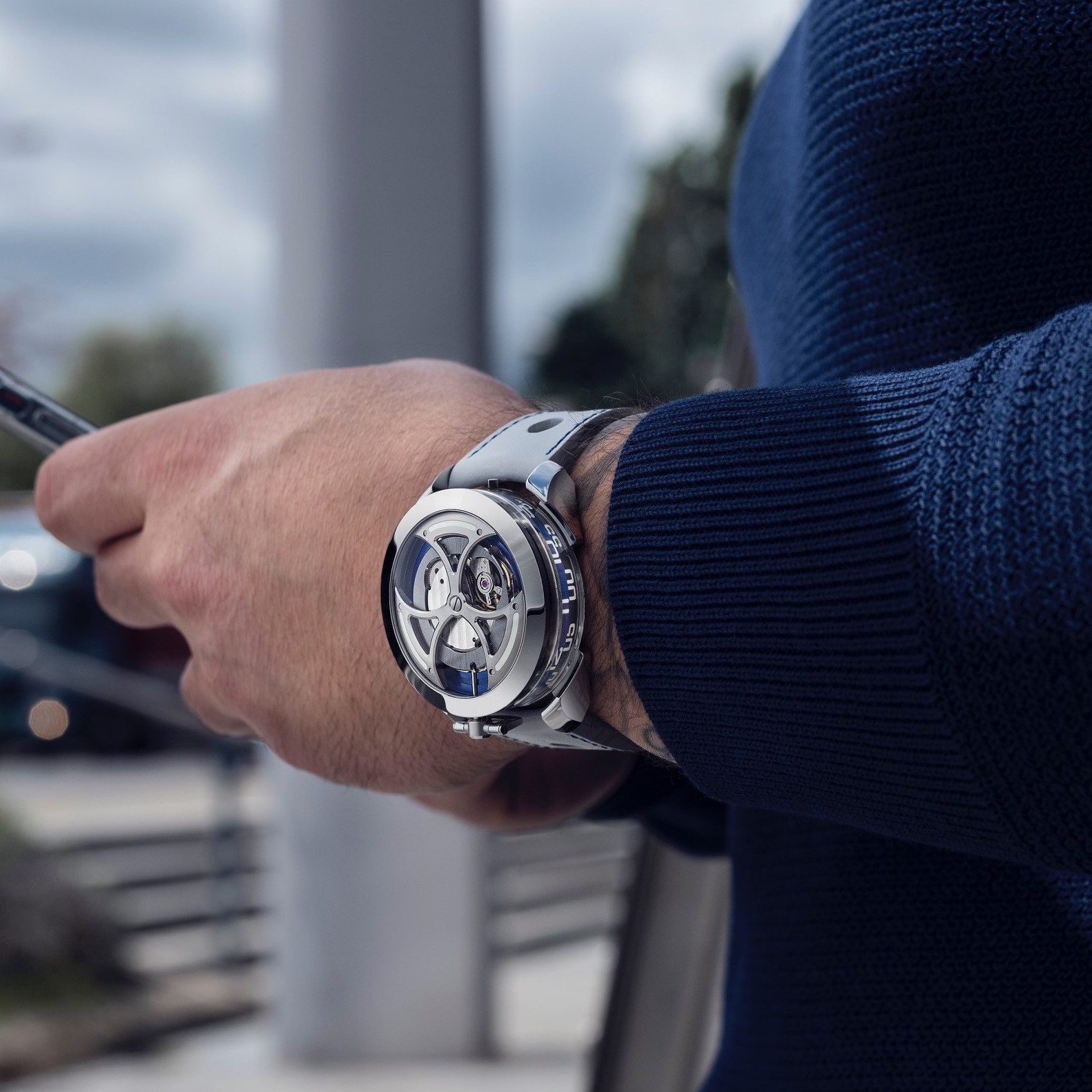 And low and behold, earlier this week we stumbled upon a new project that is causing a storm on social media. First spotted on Instagram, thanks to collector @Watchinery, we were amazed by the images we saw. It is very much in the style of Max Büsser, yet very different in execution. Somewhere between the classical style of the Legacy Machines and the wildly creative and unpredictable Horological Machines, this was something that none of us at MONOCHROME saw coming. Still, the M.A.D.1 from a new project named M.A.D. EDITION (a reference to Max Büsser’s other project, the M.A.D.Galleries, for Mechanical Art Devices) is real and out there. 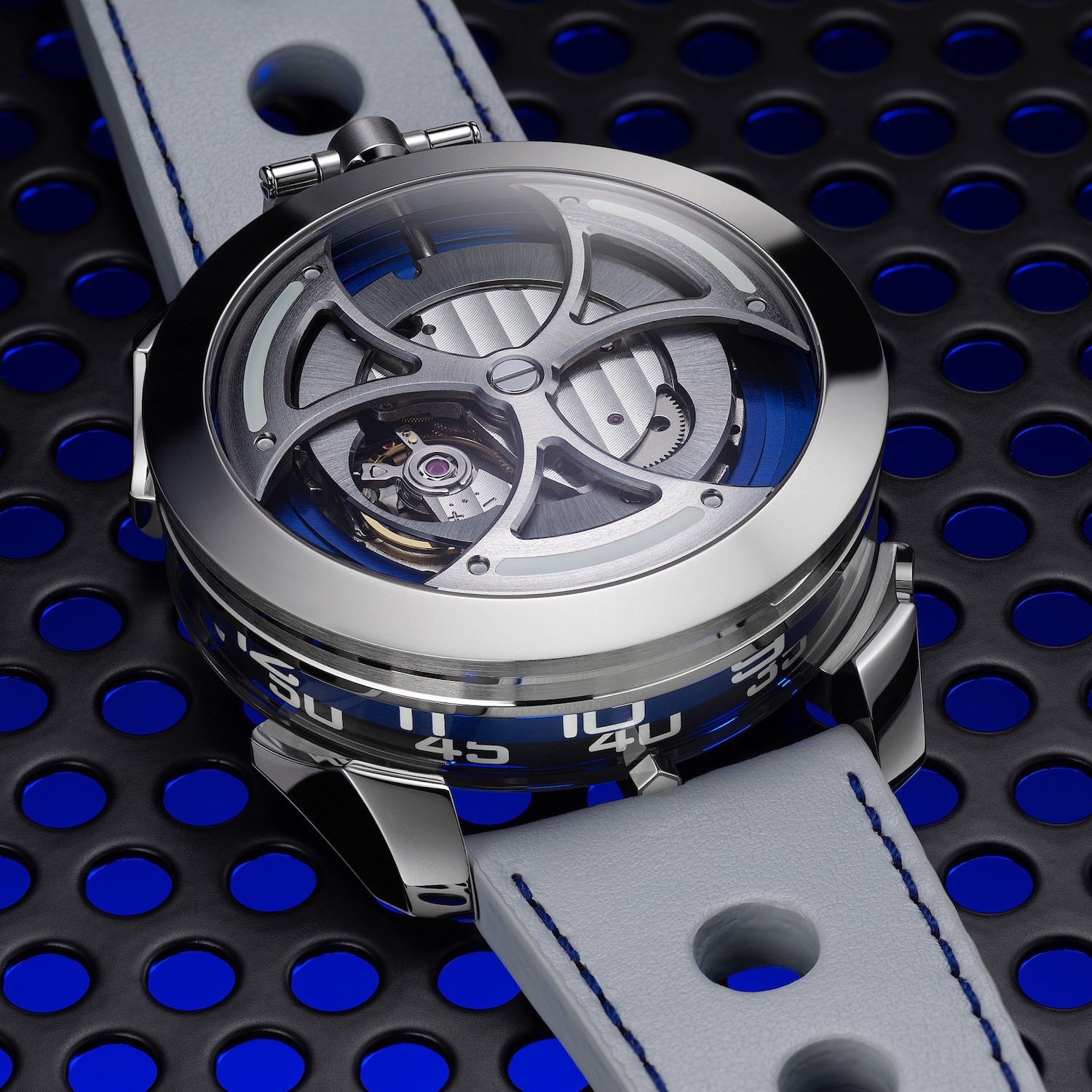 Naturally, we had to reach out, only to be quite disappointed and very intrigued at the same time. MB&F’s team was quick to break the bad news to us; no, this watch will not be for sale. It is purely intended as a “thank you” piece offered to friends of the brand, i.e. suppliers and Tribe members (collectors) of MB&F, who’ve helped shape it in all its 16 years of existence.

But what are we actually talking about? The watch is called the M.A.D. 1 and is dedicated to all the years of service provided by suppliers and the relationship with collectors of MB&F watches. But with a serious twist! Where MB&F watches normally cost north of 50k euros, the M.A.D. 1 is priced at just CHF 1,900 excluding VAT. That alone just blew us away, because what we have here looks so much more than a sub-2k watch. 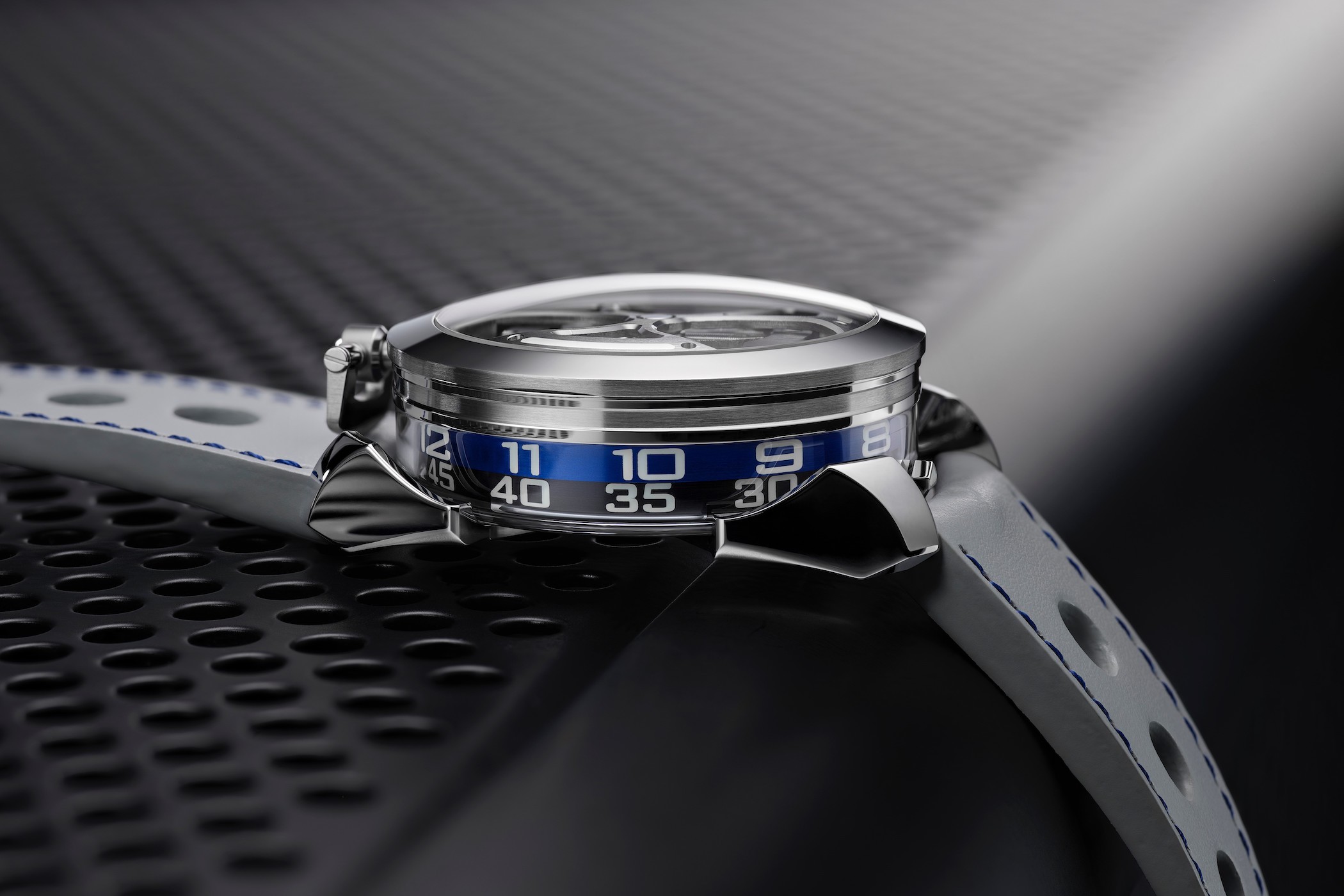 In typical Büsser style, the M.A.D. 1 is extravagant, creative and offers a unique display of the time. It is a nod to several other pieces by MB&F, as it features movement flipped upside down like in the HM3 and HM8. There’s also a lateral timing indication, another element MB&F has played around with in the past, as (somewhat) evidenced by the HM7 Aquapod and the HM3 FrogX. To keep things relatively (or extremely) affordable compared to the Horological or Legacy Machines, the movement is produced by Miyota. Quite unexpected, but it opens up the M.A.D. 1 to a whole new audience. That is, if it were for sale, which it isn’t. 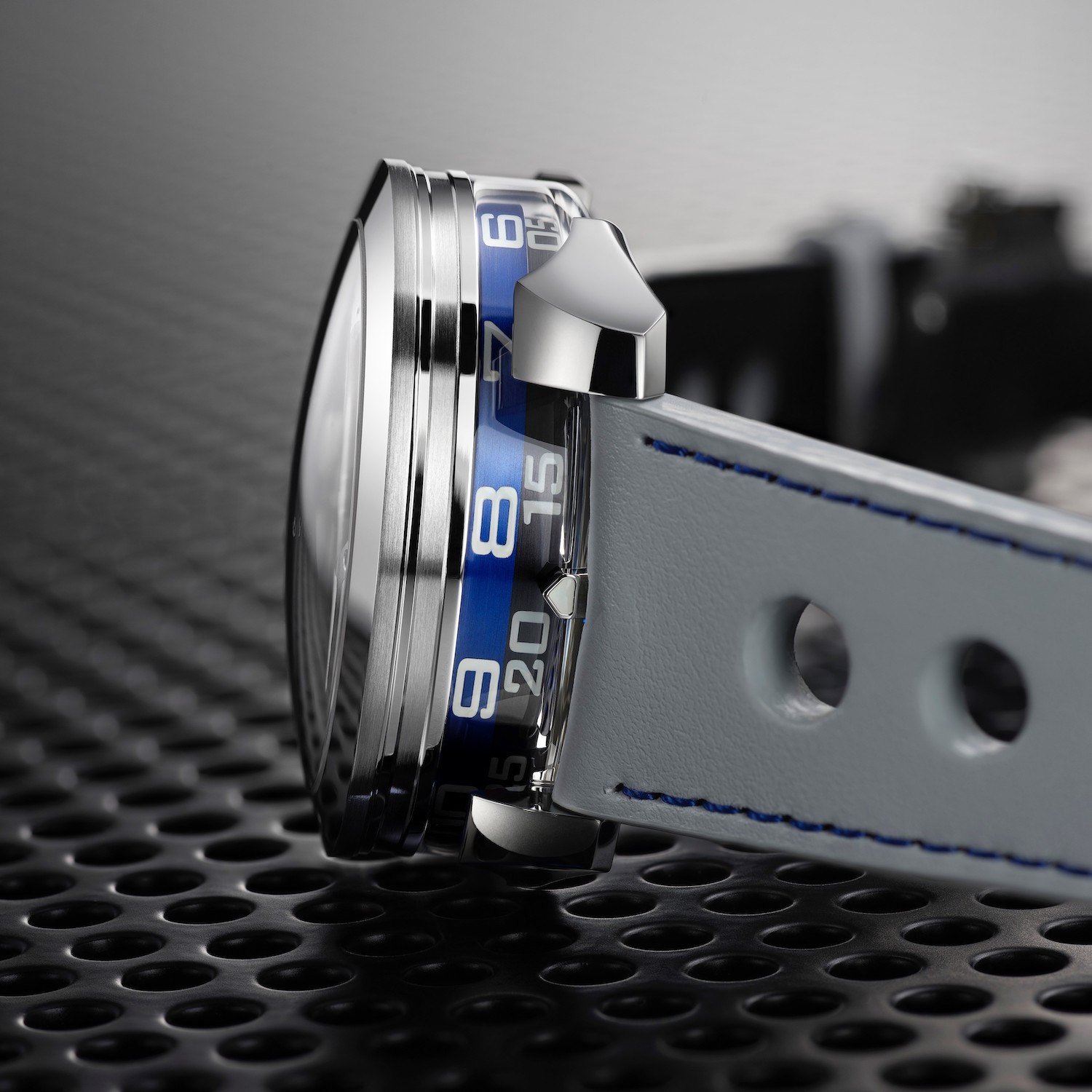 On top of the inverted movement sits a triple-bladed winding rotor, reminiscent of the battle-axe rotor in various MB&F watches. It is decorated with a stripe of Super LumiNova on each blade, another nod to past pieces by the brand (in collaboration with Mr Glow himself; James Thompson, a.k.a. Black Badger). The rotor is done in titanium and tungsten by the way… Time is indicated by two aluminium cylinders, blue for the hours and grey for the minutes. The cylinders are engraved and filled with Super LumiNova.

All is set in an unusual, evocative 42mm steel case. This features a domed sapphire on top to reveal the spinning triple-blade rotor and a sapphire crystal around the case to allow a full view of the hour and minute cylinders. You can see the mounting of the hour and minute cylinders from the bottom. All is set in a cradle-like construction to be worn on the wrist, with a light grey leather strap with blue stitching, on a folding buckle. 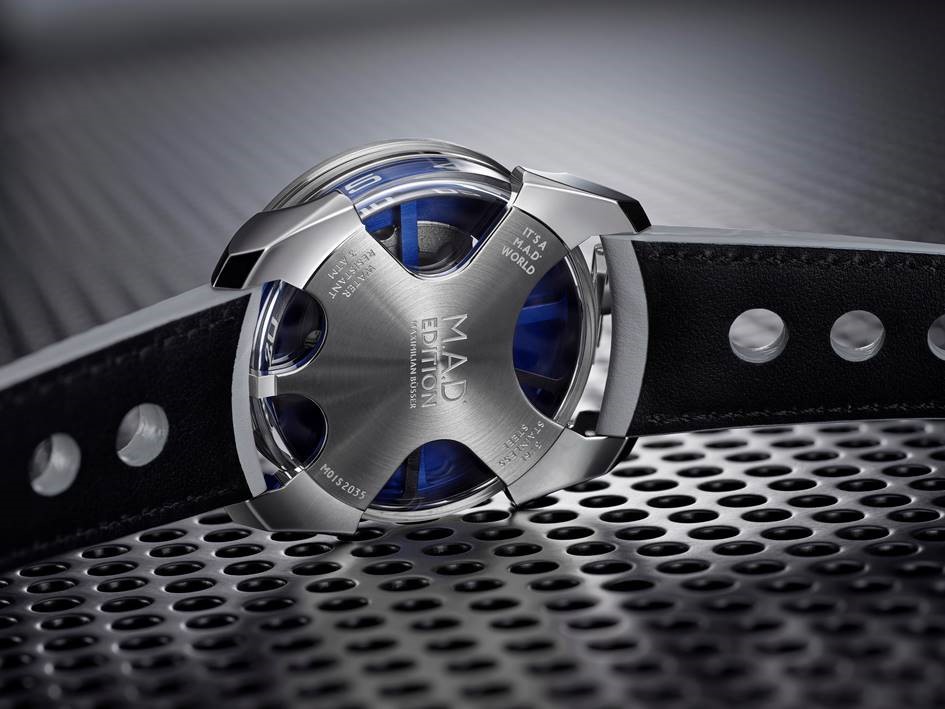 By now it’s pretty obvious we are more than a little curious to discover more about this piece. But, chances are slim we will ever see one live. That is, if Max Büsser remains firm in his decision to offer this to the brand’s inner circle only. Apparently, the teams at MB&F have been bombarded by requests, which we can fully understand. We, however, are kind of limping on two thoughts. On one hand, we applaud Büsser and his teams for taking this daring path and think they should stick to it. On the other, just build and sell the damn thing already!

Naturally, this article is dedicated to the fun in watchmaking in general, and MB&F specifically. We thank you, MB&F and all others who help shape this community and make watchmaking a little bit better each and every day. 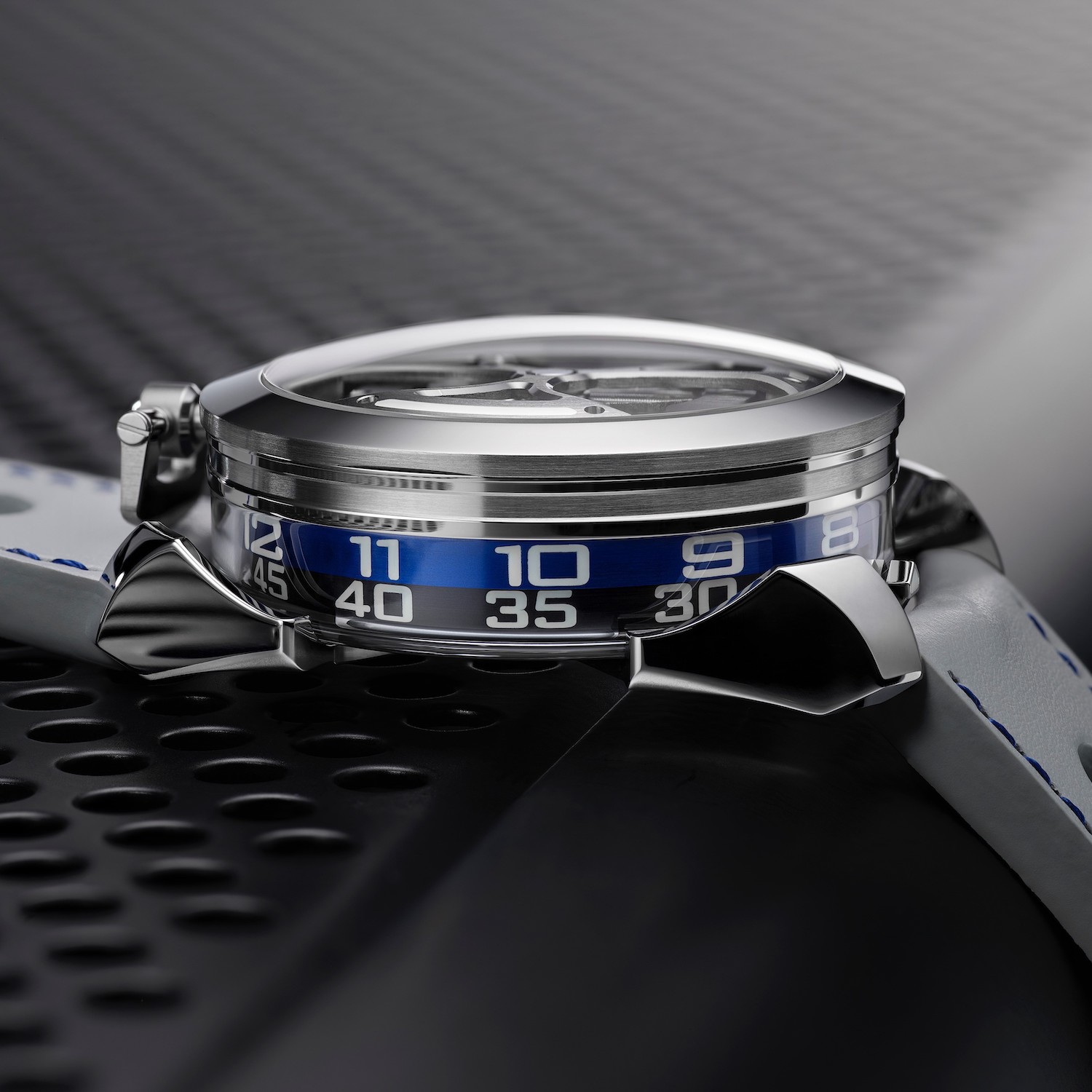 We cannot emphasize enough the fact that this is not a commercially available watch. There’s very little chance that this will change in the near future (even though we hope for it…), so for now, there’s no need to ask us, MB&F or anyone else for that matter if you can have one.