Chinese New Year kicks off on 25 January 2020 and according to the Chinese zodiac, this means we are entering the reign of the Year of the Rat (metal rat, to be precise) replacing the pig. The rat is the first animal in the Chinese Zodiac and is associated with many positive qualities such as intelligence, vitality, success, abundance and wealth. Once again, Vacheron Constantin commissions its talented team of artisans to create a special dial for the upcoming Year of the Rat. Two new creations in platinum or 18k pink gold, limited to just 12 models each, fete the arrival of the auspicious rat. Powered by the calibre 2460 G4, the dial has no hands and instead features four apertures for the day of the week, the date, the time and the minutes leaving centre stage to the animal star of the 2020 Chinese zodiac. 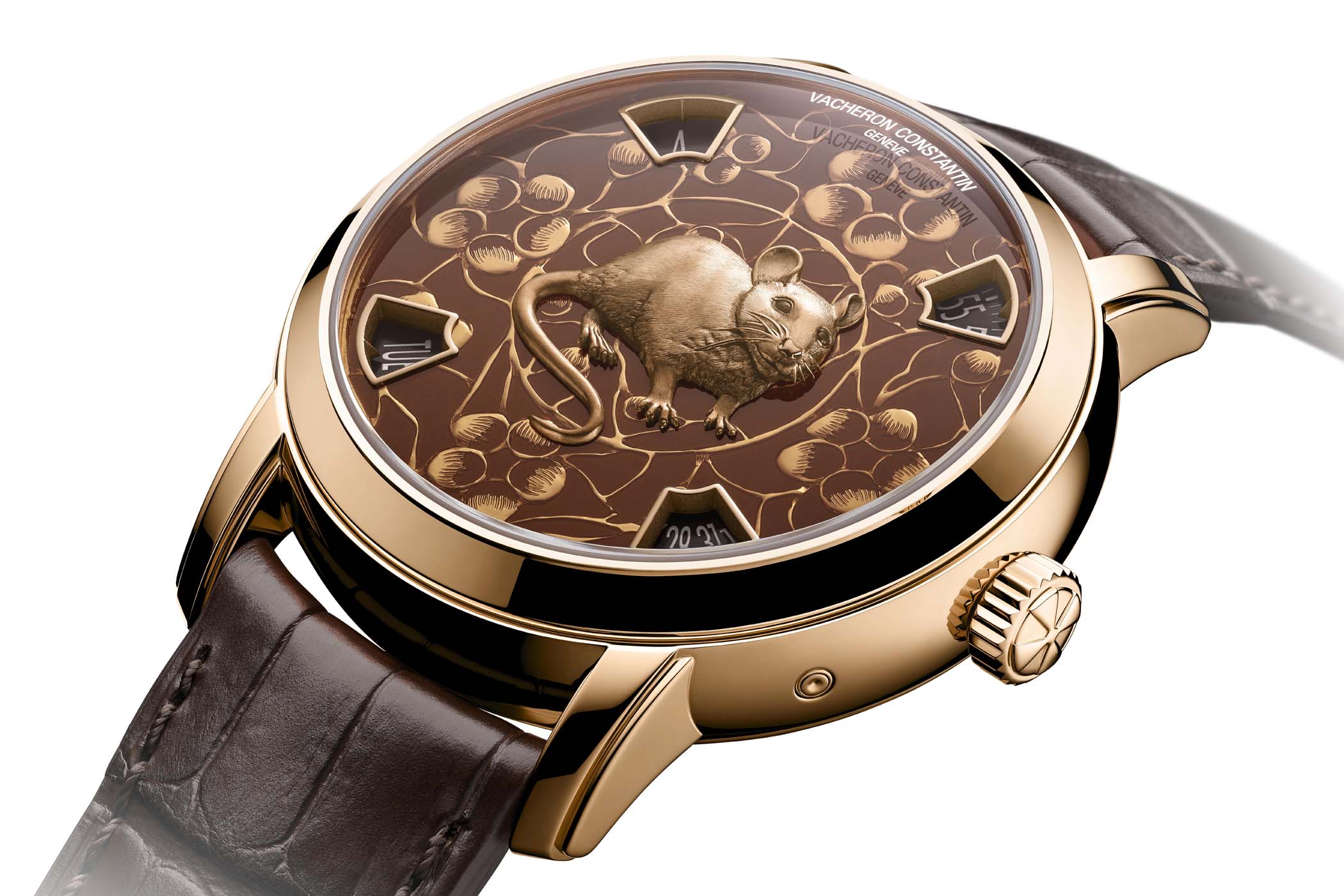 The tasteful representation of different animals in the Chinese Zodiac is becoming something of a tradition at Vacheron Constantin, so much so that there is even a sub-collection in the Métiers d’Art family known as The Legend of the Chinese Zodiac. As an eminently Swiss watchmaker in tradition and taste, Vacheron wanted to imbue its Legend of the Chinese Zodiac models with a more oriental spirit and took inspiration from the Chinese art of paper cutting (jianzhi). This millenary folk art, which involves cutting intricate patterns into thin sheets of paper, is intimately associated with Chinese festivities and the red paper cuts are used to festoon doors, windows, walls and lamps.

Instead of scissors, master engravers have etched motifs of Chinese foliage directly in the gold metal before the Grand Feu enamel is applied to the surface. Layer after layer of blue or brown enamel is applied and baked until the right intensity is achieved. The star of the show, the rat, is hand-engraved in either platinum or pink gold and applied to the dial. The lifelike fur of the rat, his claws, his whiskers and even his hairless tail are captured to perfection.

Both the platinum and the 18k 5N pink gold cases share a 40mm diameter, a case height of 12.74mm and polished surfaces. The caseback, made of sapphire crystal, reveals Vacheron’s self-winding calibre 2460 G4, which powers the original hands-free display: the hours are shown in an aperture at 11 o’clock, the minutes at 2 o’clock, the date at 5 o’clock and the day of the week at 7 o’clock. The hour and minutes advance on dragging discs while the day and date are on jumping discs. The openworked 22k gold rotor features the signature Maltese cross and the decorations of the movement are refined, in keeping with the Hallmark of Geneva certification. Oscillating at 28,800vph/4 Hz, the movement has a power reserve of 40 hours.

The Métiers d’Art The Legend of the Chinese Zodiac – Year of the Rat comes with a hand-stitched dark blue or brown alligator leather strap to match the dial and a platinum or pink gold folding clasp. Limited to 12 pieces in each metal, the watches are only available at Vacheron Constantin Boutiques. More details on vacheron-constantin.com.