It’s rather unusual for Tudor to launch a watch out of the Baselworld context… What is even more unusual is a Tudor limited edition (except one done with Harrods and one with Bucherer). This explains why today’s launch is a bit of an exception. As one of the official sponsors of the All Blacks (New Zealand’s national rugby team) and as the 2019 Rugby World Cup is about to start in a few days from now, Tudor introduces a perfectly matching new model. Meet the Tudor Black Bay Chrono Dark Limited Edition ref. 79360DK. And check the video on top of the article to see it in action and in details.

Back to Black (Bay Chrono)

The Tudor Black Bay needs no introduction anymore. It is the signature collection of the brand and has been its best-seller for over 7 years now. But let me refresh your memory on a slightly controversial topic: the Black Bay Chrono.

Chronographs have always been important for Tudor, especially since the early-1970s and the introduction of the Tudor Oysterdate Chronograph 7031 and 7032, as well as the “Montecarlo” 7149, 7159 and 7169 – more details about these watches here. Even when Tudor relaunched in the early-2010s, the chronograph was a predominant complication in the collection, with the Heritage Chrono. 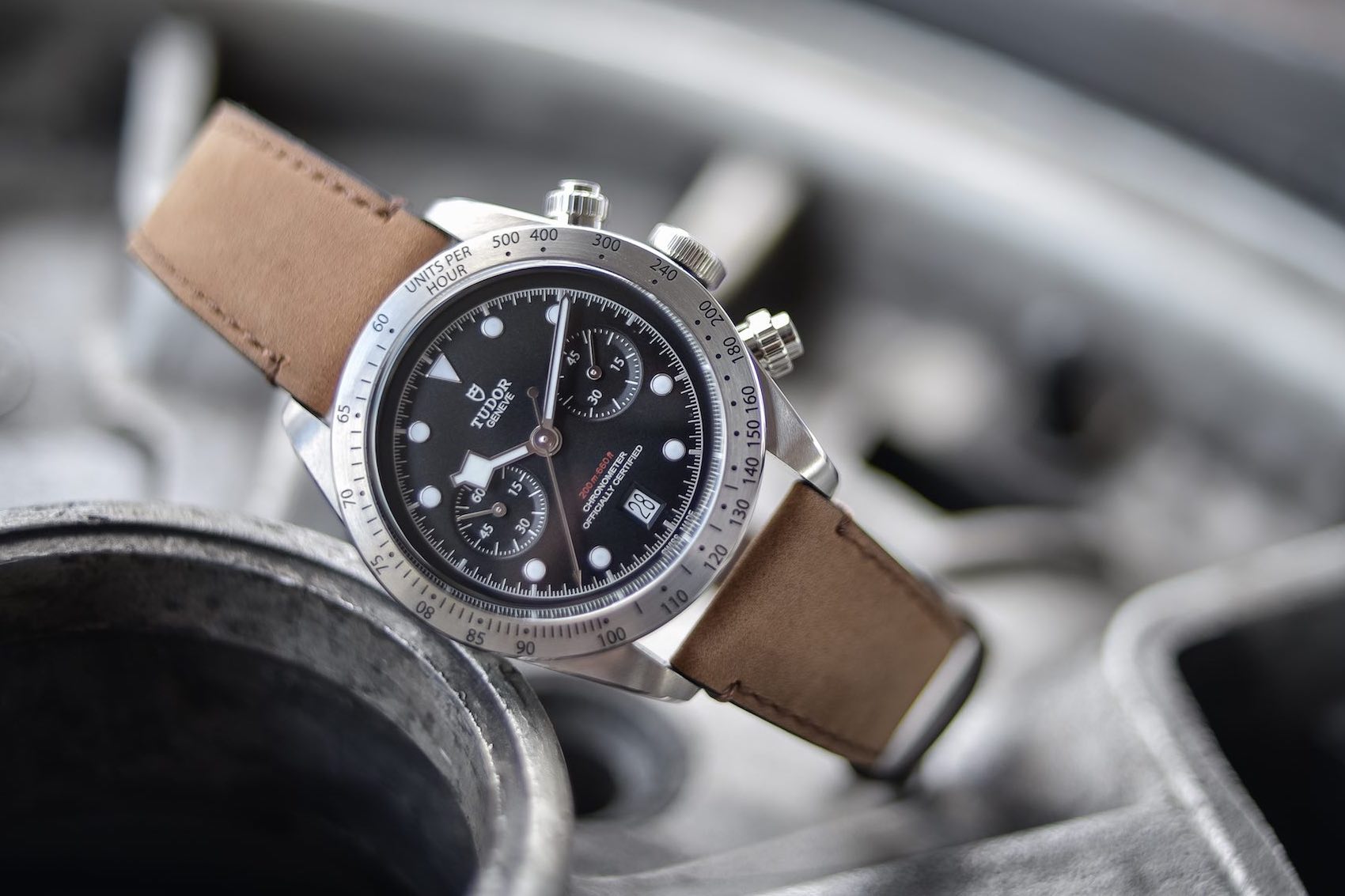 In 2017, the brand decided to add a chronograph to its Black Bay line, thus mixing racing-inspired elements (tachymeter bezel and overall toolish look) with the classic diving attributes of the collection (200m water resistance and Snowflake hands). This watch certainly created some discussions and controversies, despite being achieved, mechanically interesting and fairly priced. Something we longly discussed in this article. At Baselworld 2019, Tudor introduced the Steel-and-Gold model. And while the latest already gave an indication of the road chosen by Tudor for its chronograph, the newest version we have with us today is making things clear: the Black Bay Chrono is a racing chronograph first and foremost, and its black attire makes it even stronger.

This new Tudor Black Bay Chrono Dark ref. 79360DK couldn’t be more obvious. A full-black watch to celebrate the “All Blacks”… Still, being simple sometimes and going straight to the point is better than trying to find a justification to a limited edition. 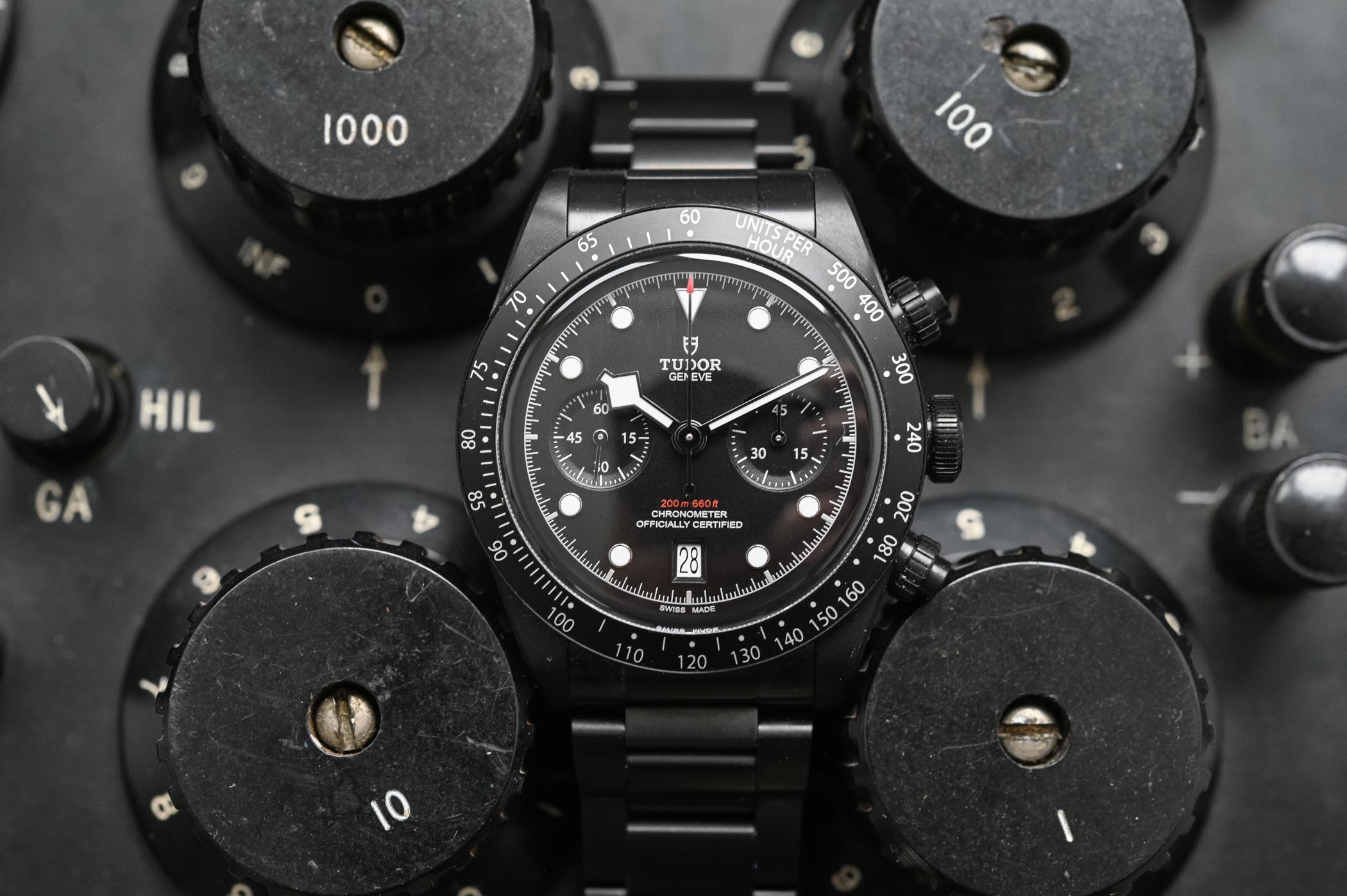 So here it is: you’re in front of an entirely black PVD-coated version of the Tudor Black Bay Chrono. What changes compared to the standard steel version we mentioned above? In fact, apart from this Physical Vapour Deposition (a thin-film technology originally developed by NASA for its various space programs), not much. However, visually, this changes the watch quite dramatically. 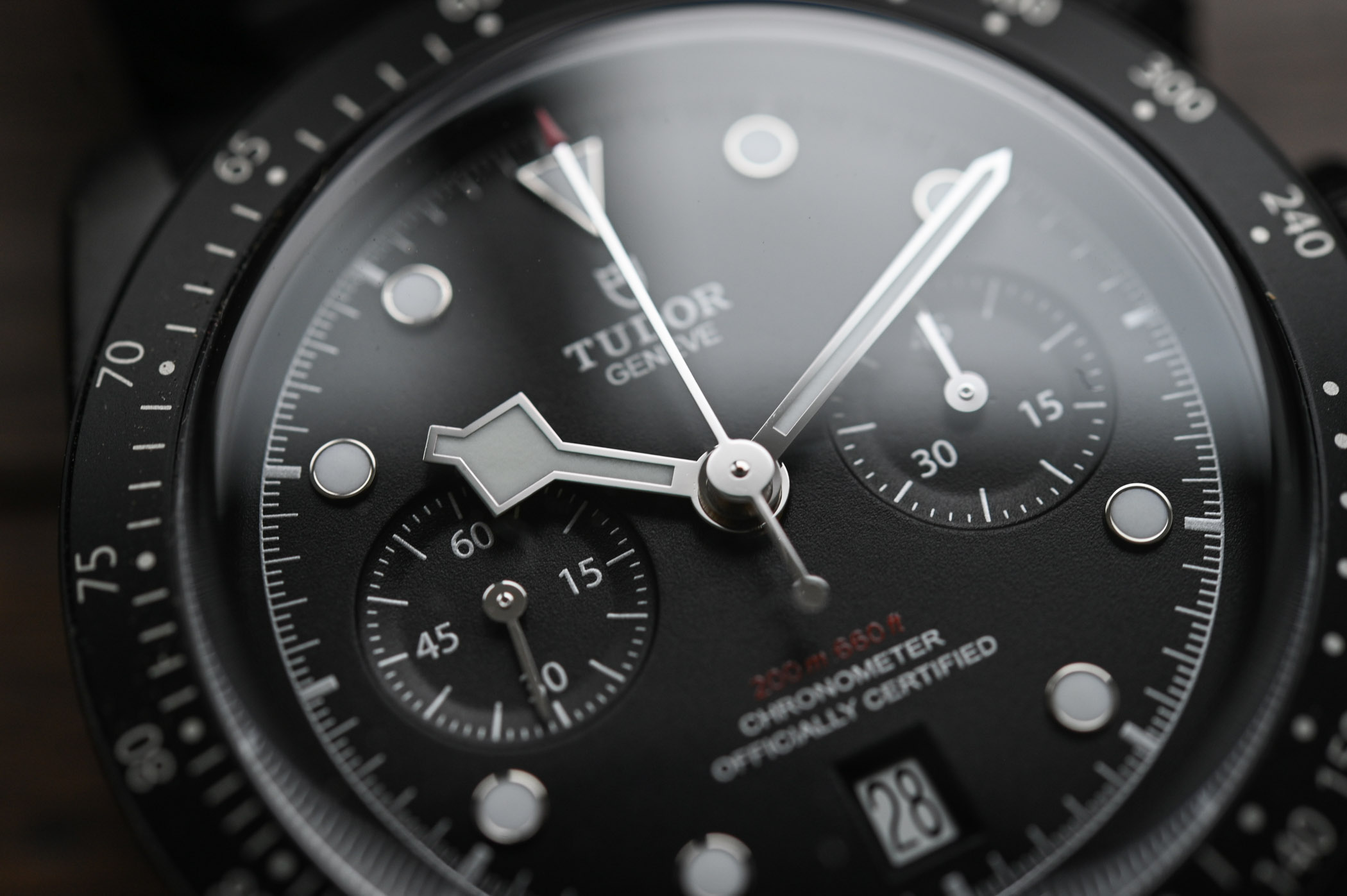 First things first, what doesn’t change is the dial. We still find this domed, grained and matte background on which are displayed two sub-counters (small seconds and 45-minute register), central hands for the hours, minutes and chronograph seconds and a date at 6 o’clock – on a white disc, which balances the dial and echoes the round applied hour markers. One could argue about the snowflake hands, which don’t feel totally appropriate here, but once again, they are part of the collection’s DNA. We’re not going to enter this debate again. 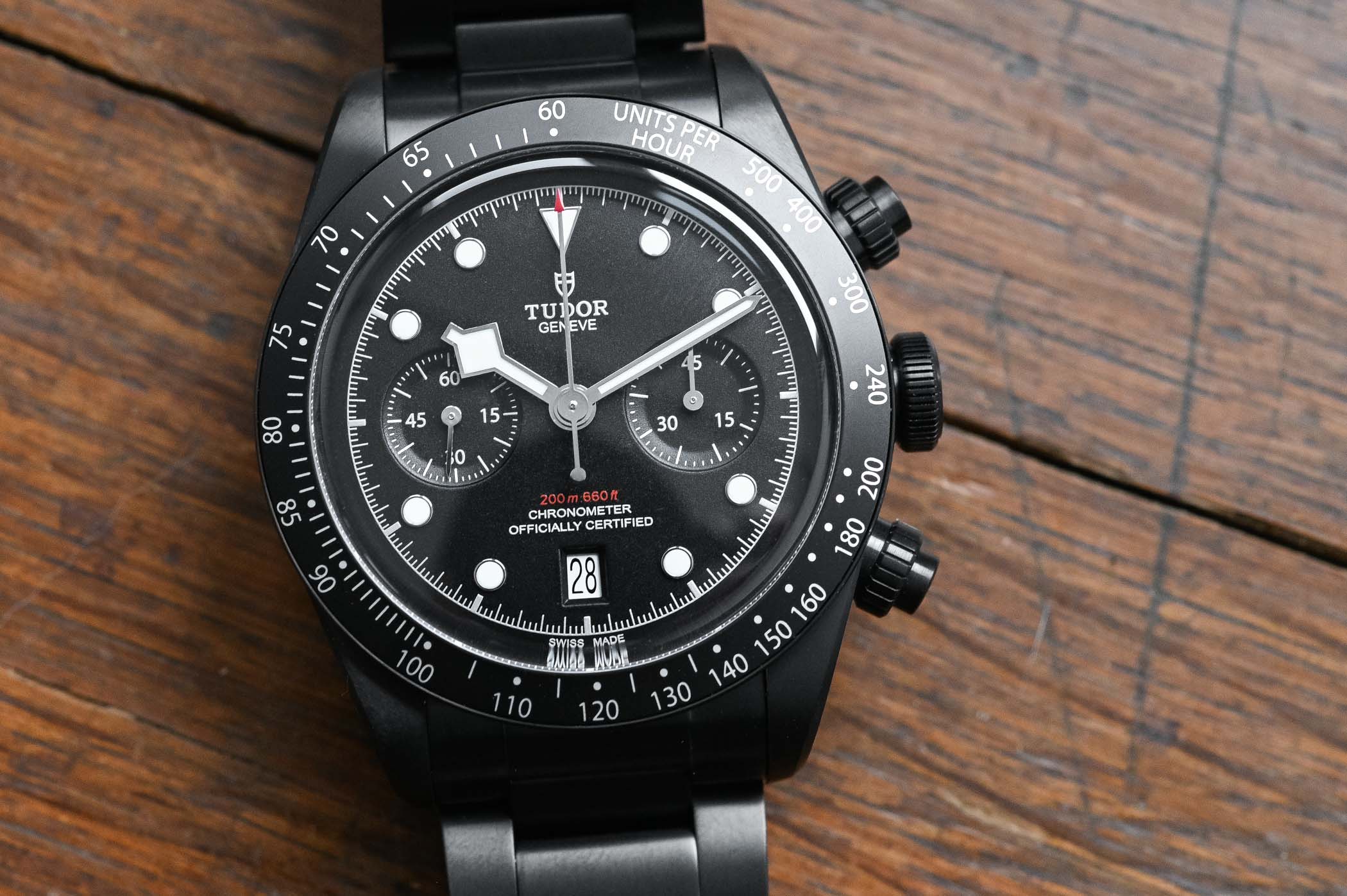 Moving to the dial’s periphery, the bezel retains its tachymeter scale – which sets this watch as a racing-oriented piece – but on the contrary of the steel model, the bezel features a black anodised aluminium disc and isn’t solid steel anymore – the reason is resistance to scratches. The pushers are PVD-coated, just like the crown. All are screw-down, guaranteeing a solid 200m water resistance. However, screw-down pushers are not the most practical when it comes to start and stop the chronograph function. 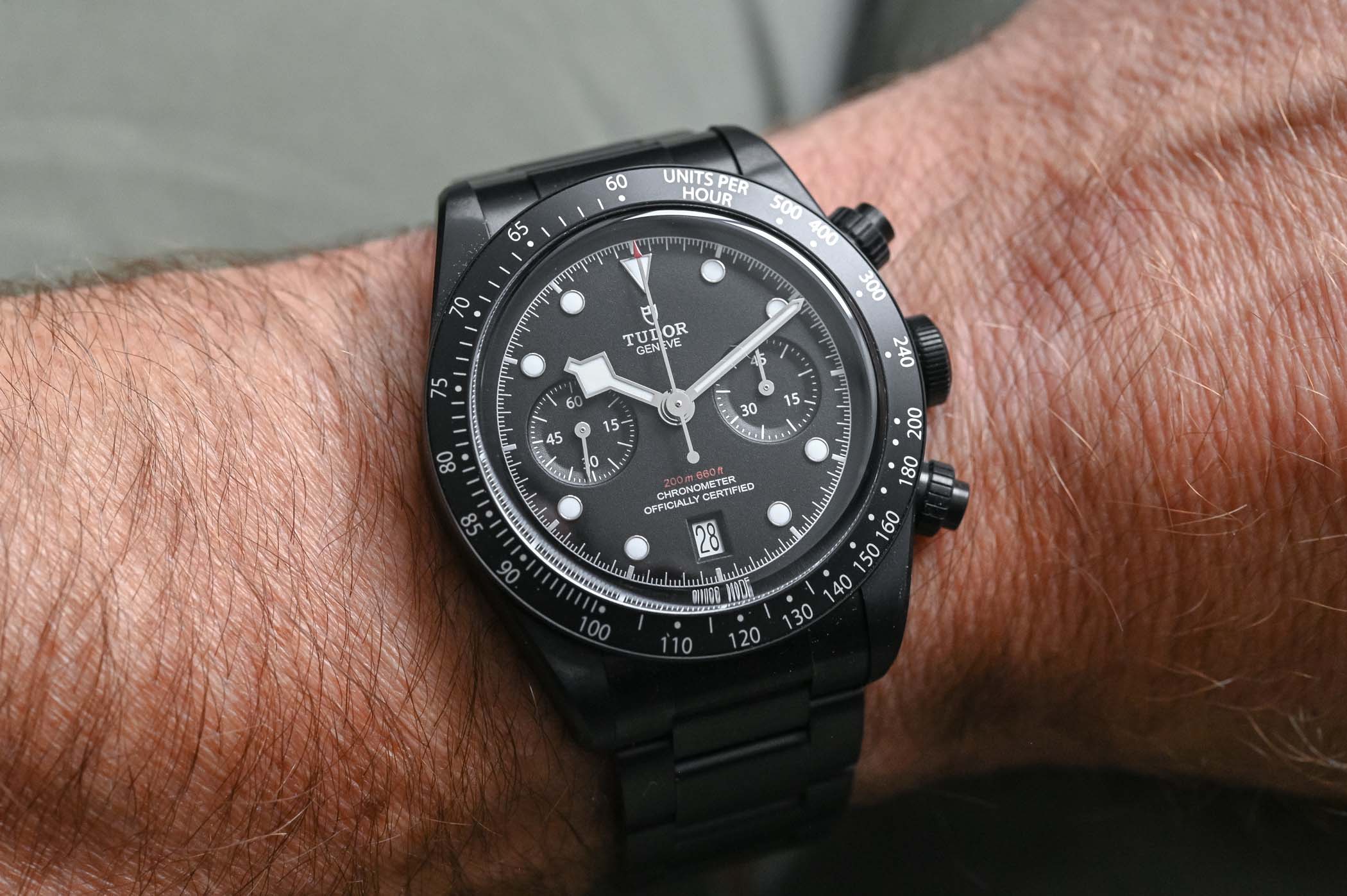 The case itself retains is 41mm diameter, its satin-brushed surfaces and the signature bevel on the side of the lugs. It might be a chronograph but it has all the attributes of the Black Bay collection. The case and case back are PVD-coated too. Finally, this Tudor Black Bay Chrono Dark is worn exclusively on a metallic bracelet, which isn’t in the vintage riveted style here. It is full-blackened too and comes with a folding clasp and safety catch.

Inside the case of the Tudor Black Bay Chrono Dark 79360DK is the Manufacture calibre MT5813, which we all know is based on the Breitling B01 architecture. This is an integrated automatic movement with modern features, such as a vertical clutch and column-wheel to actuate the chronograph functions. No doubt here, this is a very solid offer and well-known movement with superior reputation. 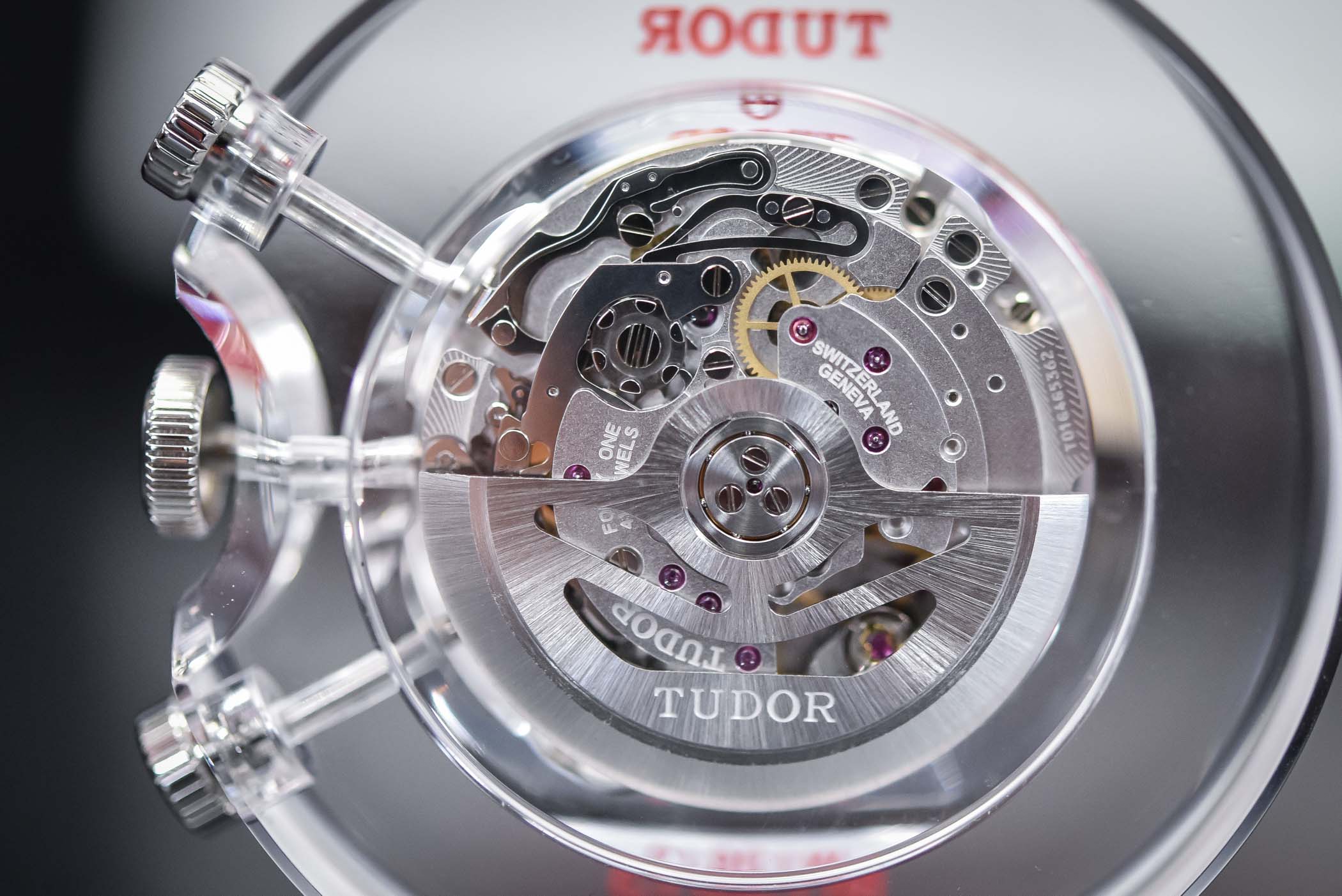 A view to the Manufacture Calibre MT5813 – which you won’t see on the final product, as hidden behind a solid steel case back.

Before being encased by Tudor, the movement is modified, with the addition of specific elements on the regulation. It comes with a non-magnetic silicon balance spring and a variable inertia balance – two elements to improve reliability and precision – the movement beeing chronometer-certified by COSC. Other difference with the Breitling version, the Tudor calibre MT5813 is finished with sand-blasted bridges – which allows for a lower price and which doesn’t matter much since the movement is hidden behind a solid, screwed case back.

What to think about this new Tudor Black Bay Chrono Dark? I’m usually not a fan of blackened watches. However, I was pleasantly surprised by this Dark version of the BB Chrono. While the steel model was probably “too metallic” (understand here that it lacked contrast), this Dark edition feels more appropriate as it visually makes the watch more compact and it enhances the racing style of the piece – and thus is more coherent. 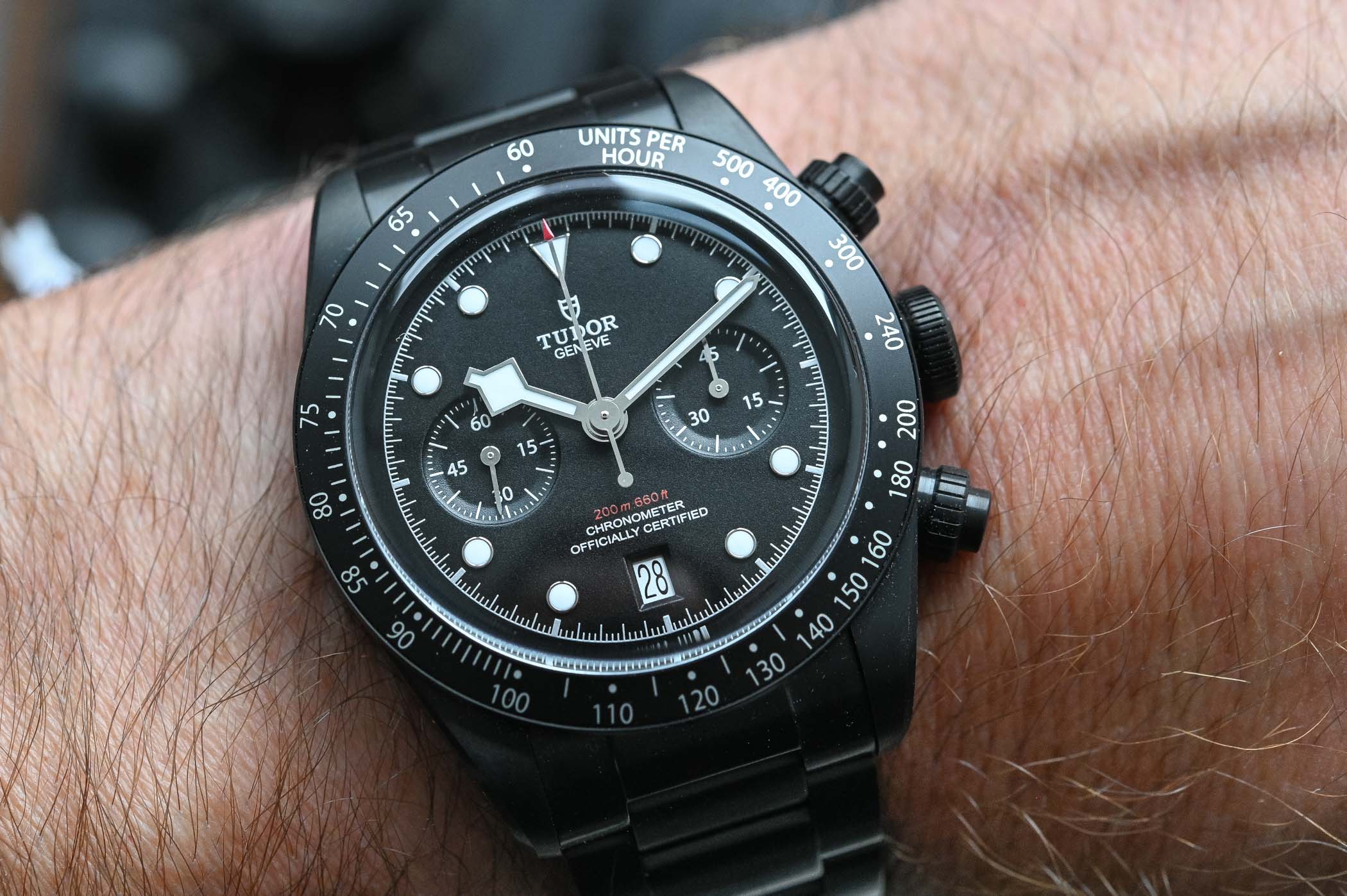 What remains true is a superior quality of construction, a great movement and solid package considering the price of this watch.

The Tudor Black Bay Chrono Dark reference 79360DK is a limited edition, with the same number of timepieces as All Blacks players since the team’s creation in 1903 to the RWC 2019, or 1,181 timepieces at the time of writing. The number will be adjusted according to the final composition of the World Cup team. The series will grow over the coming years as new players join the ranks of the All Blacks. This will be made clear on the back, with the presence of a special engraving indicating the serial number of each timepiece. 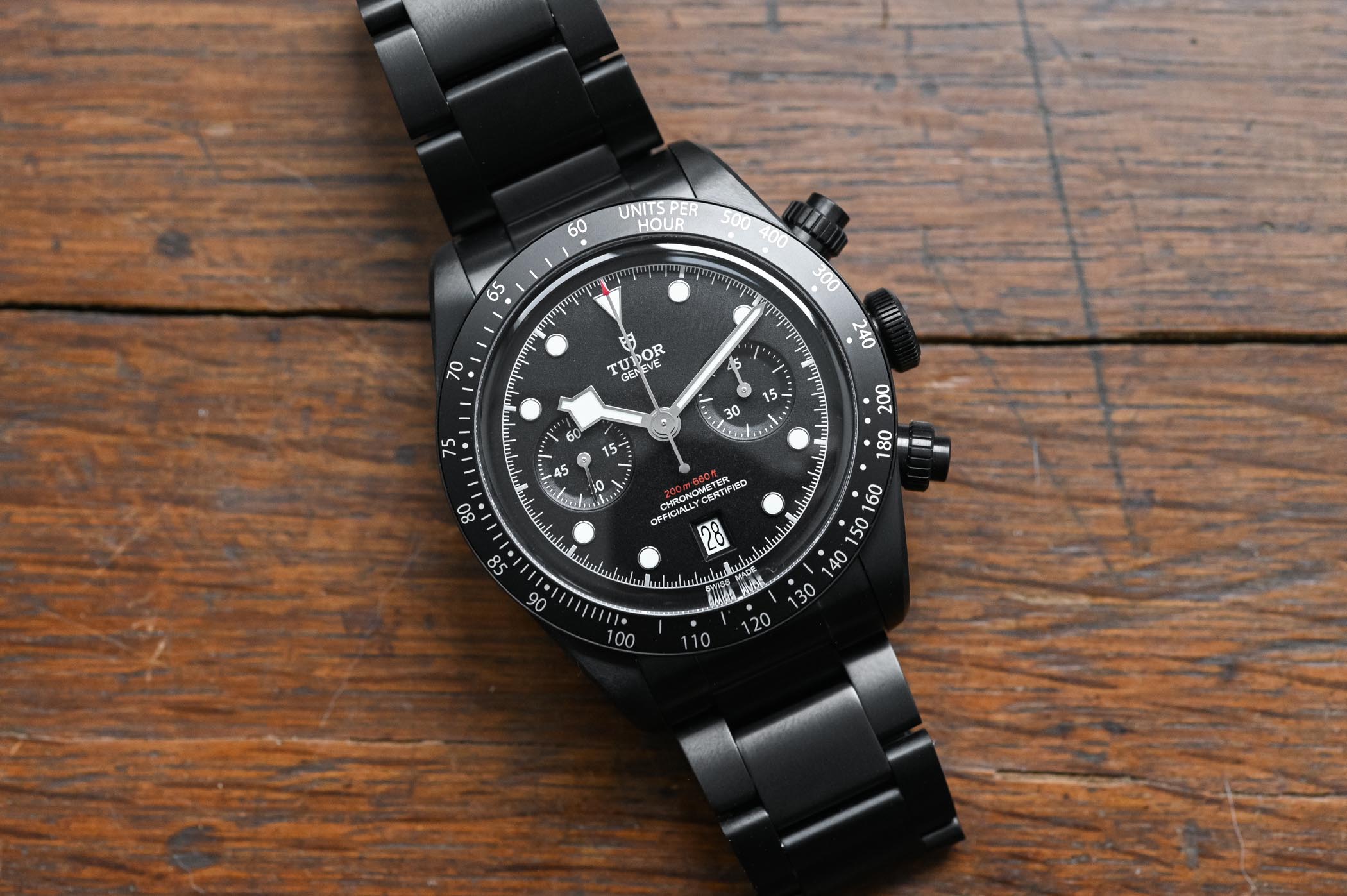 The Tudor Black Bay Chrono Dark will be priced at EUR 5,590. More details at www.tudorwatch.com.

Racing along the tight curves of the Formula 1 city circuit, historic cars compete in the Grand Prix de Monaco Historique, a reference in...