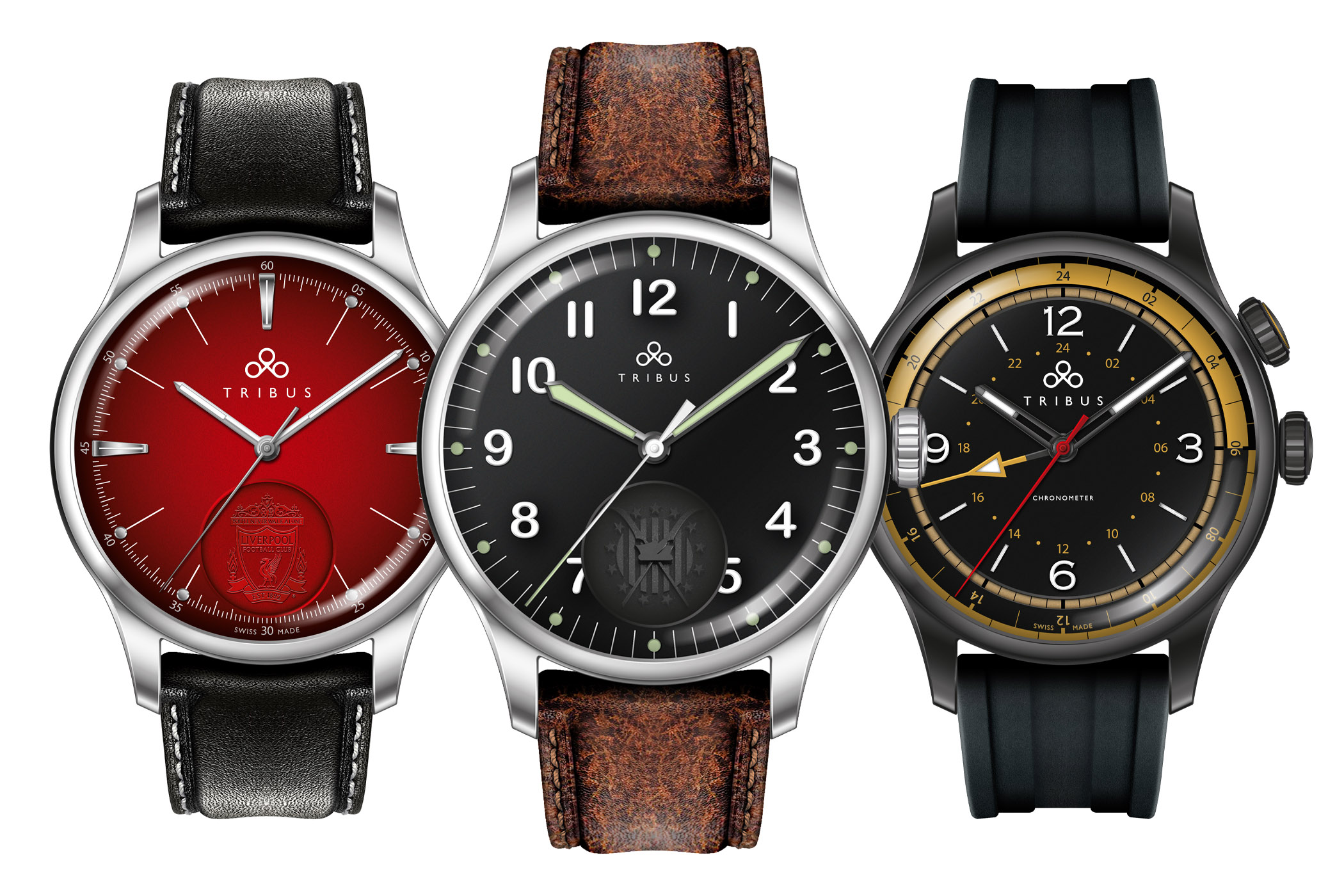 A three-month manufacturing delay and a global pandemic haven’t deterred new luxury watch brand TRIBUS from launching with its line of timepieces inspired by dress watches from the 1940s and 50s. The company, founded by brothers Jake, Jonathan and James Ward, combines its Liverpudlian roots with Swiss watchmaking traditions. The company draws upon key childhood interests influenced greatly by the three siblings’ father, Christopher Ward, a passionate Liverpool FC supporter and a keen watch enthusiast, which explains the story behind its Premier League Champions watch. Also amongst the selection is a celebratory 80th-anniversary Battle of Britain wristwatch that pays tribute to a Polish squadron and its contribution towards defeating enemy aircraft during the Second World War.

Each watch created by TRIBUS uses a Swiss-made case and a chronometer-certified movement manufactured in Lugano, Switzerland. The four models that comprise the brand’s core collection share what the company refers to as “retro-temporary” DNA. In addition to this dress watch styling, some models offer extra functions like power reserve indicators and GMT features. Having officially launched within the last week, TRIBUS is keen to share its heritage and how a combination of partnerships, along with its own series of timepieces, enables it to stand out.

The TRI-08 Premier League Champions Special Edition line (priced between EUR 1,095 and 1,426) marks a multi-million-pound deal and a five-year partnership between TRIBUS and Liverpool Football Club. By taking advantage of the club’s huge global reach of 800 million followers, the timepieces bear LFC’s signature red colour on a three-handed dial and its crest embossed upon a recessed sub-counter at 6 o’clock.

Another special timepiece, the TRI-05 303 Squadron P8331 model is limited to 303 pieces and holds a metal disc from the arming panel of Piotr Laguna’s Spitfire P8331 RF-M “Sumatra”. The aircraft was shot down from the skies above Coquelles in 1941. Commemorating the Battle of Britain’s 80th anniversary, the 41mm steel model (priced at EUR 2,707) has a special engraved caseback and glass. Its black three-handed dial with luminous printed Arabic indices is equipped with black gunmetal hands propelled by a Sellita movement. Having collaborated with Laguna’s Spitfire Legacy (LSP) to create this limited edition watch, TRIBUS remembers the crucial role carried out by Polish servicemen who had their place at the British Victory March of 1946 wiped from their legacy.

The TRI-01 Small Second model (priced between EUR 1,426 and 1,536) is available in an unusual variety of dial colours. Aside from classic black and cream colours, iterations in salmon pink, yellow, and teal, fitted with either black or brown leather straps feature Arabic dials and a small second sub-dial at 6 o’clock.

The TRI-02 GMT 3 Timezone model (priced between EUR 1,756 and 2,086) features a yellow GMT hand and an adjustable raised bezel marked out in a 24-hour scale. The frequent traveller can thus track three different timezones simultaneously.

The TRI-03 Power Reserve GMT collection features a bi-compax dial available in cream or black. The power reserve sub-counter at 12 is balanced by a 24-hour sub-dial at 6 o’clock. The models available in steel or gold PVD range from EUR 2,086 to 2,197 respectively.

Lastly, the 41mm TRI-04 Power Reserve GMT Sport, as its namesake suggests, is a more athletic-looking design. Red and yellow accented dials and black PVD-coated steel cases are offered on a choice of a bracelet, rubber strap or leather band.

With a debut catalogue of designs that mix the old with the new, TRIBUS is a watch brand that focusses on collaborating with some left-field partnerships to align its British heritage with reliable Swiss precision.

More details about the brand and its models here, at tribus-watches.com.