StartBloggers CornerIntroducing – Time+Tide Live In An Upside Down World, And So Does...

Introducing – Time+Tide Live In An Upside Down World, And So Does Their Nivada Chaosmaster

Alright, it’s not because our friends of Time+Tide come from Australia that this watch is upside down (well, in fact, they do live upside down, according to some beliefs… anyway…) No, there’s another reason behind this very, very confusing watch. Confusion is the master word here, and it all goes back to a meeting between Andrew McUtchen, founder of T+T and Guillaume Laidet, CEO of Nivada Grenchen. And if the discussion turned around watches, it also brought to the table the fact that the world is somewhat stranger lately. A bit mad. Slightly chaotic. And this is the starting point for an idea… Which has been materialized by the one and only rule-breaker Seconde/Seconde, in the name of the Nivada Chaosmaster (of course…) 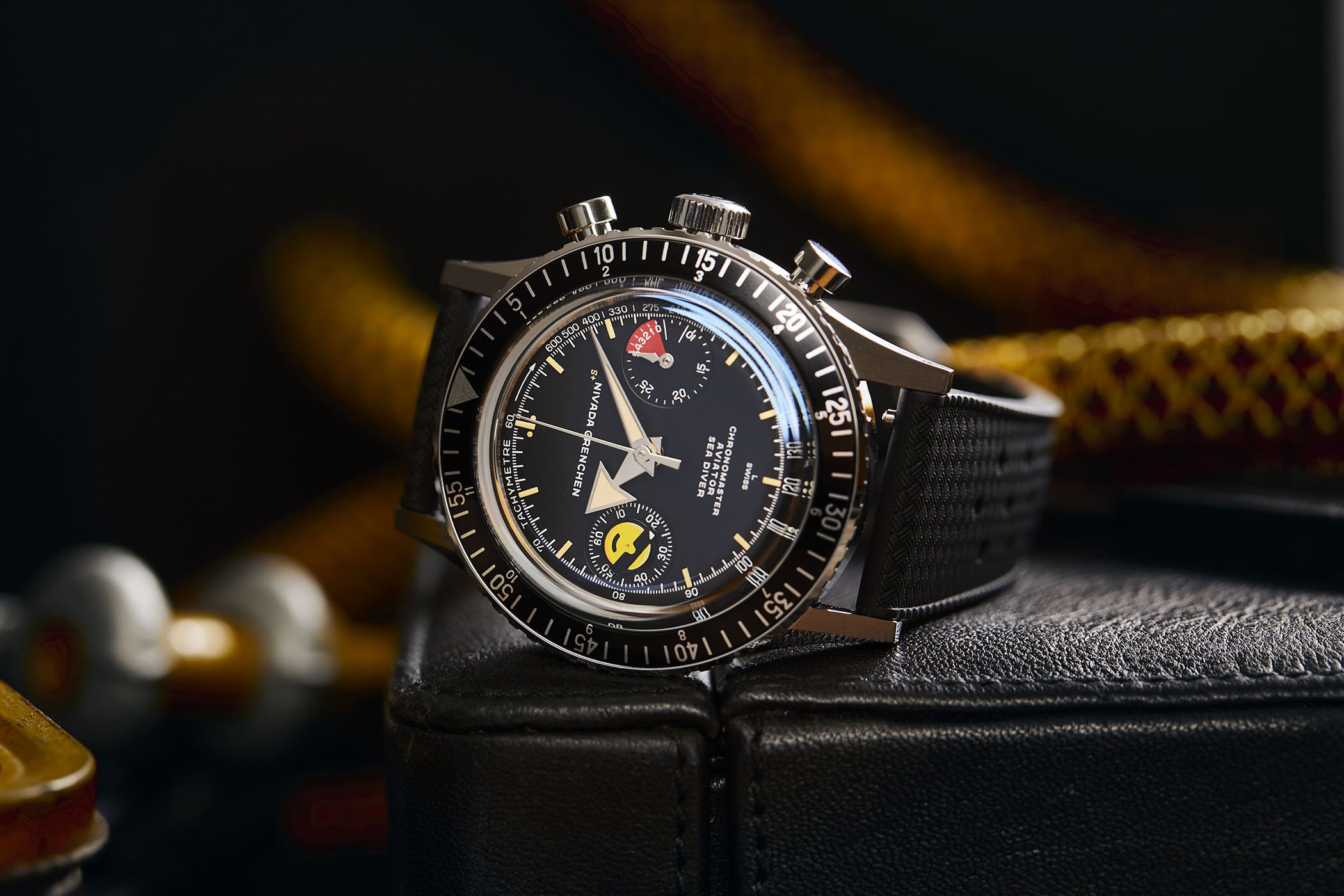 All in all, the deal is simple. Take the classic Nivada Grenchen Chronomaster Aviator Sea Diver (which we reviewed here), brainstorm for hours over an endless WhatsApp thread, and give the watch to the brilliantly weird mind of Romaric André, a.k.a Seconde/Seconde, to finalise the idea and make it a reality. Well, a rather surreal reality, if you ask me. But in a world where mechanical watches are as essential as they are absurd, there’s nothing wrong in making them even more absurd… And thus completely relevant. Yes, I know, it’s all very chaotic. But that’s the point here, isn’t it? 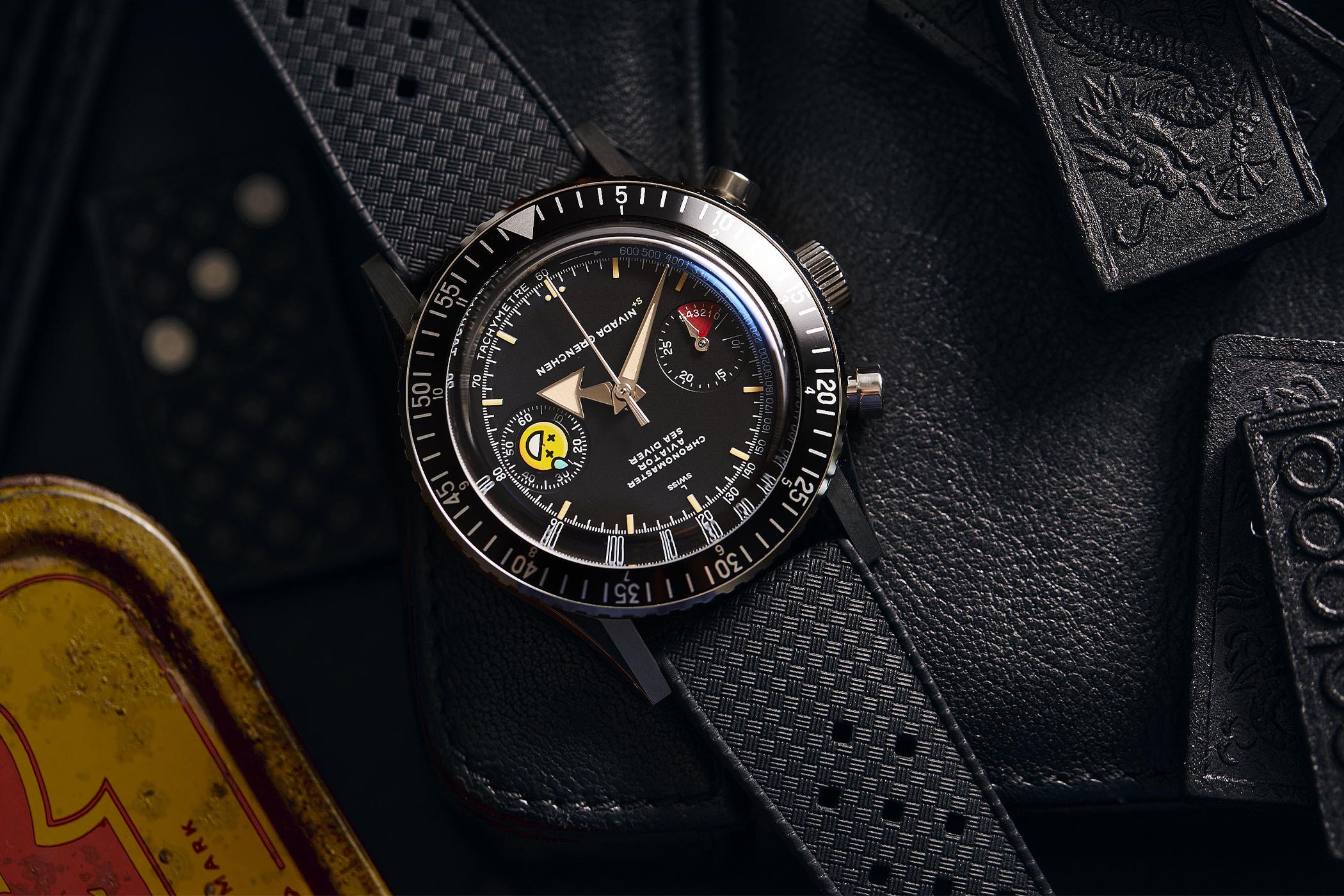 So, this new watch is using the base of the Chronomaster Aviator Sea Diver. This means; historical look, 38.5mm diameter, stainless steel case with brushed and polished surfaces, elements from racing watches, pilot’s watches, dive watches, all blend in a single watch with tachymeter scale and 12-hour and 60-minute rotating bezel, and in the present case, a hand-wound Sellita chronograph movement. And yes, the base dial is still the classic matte black one, with the beige-toned broad arrow hands. So the base is cool, well-established, and respected by many. 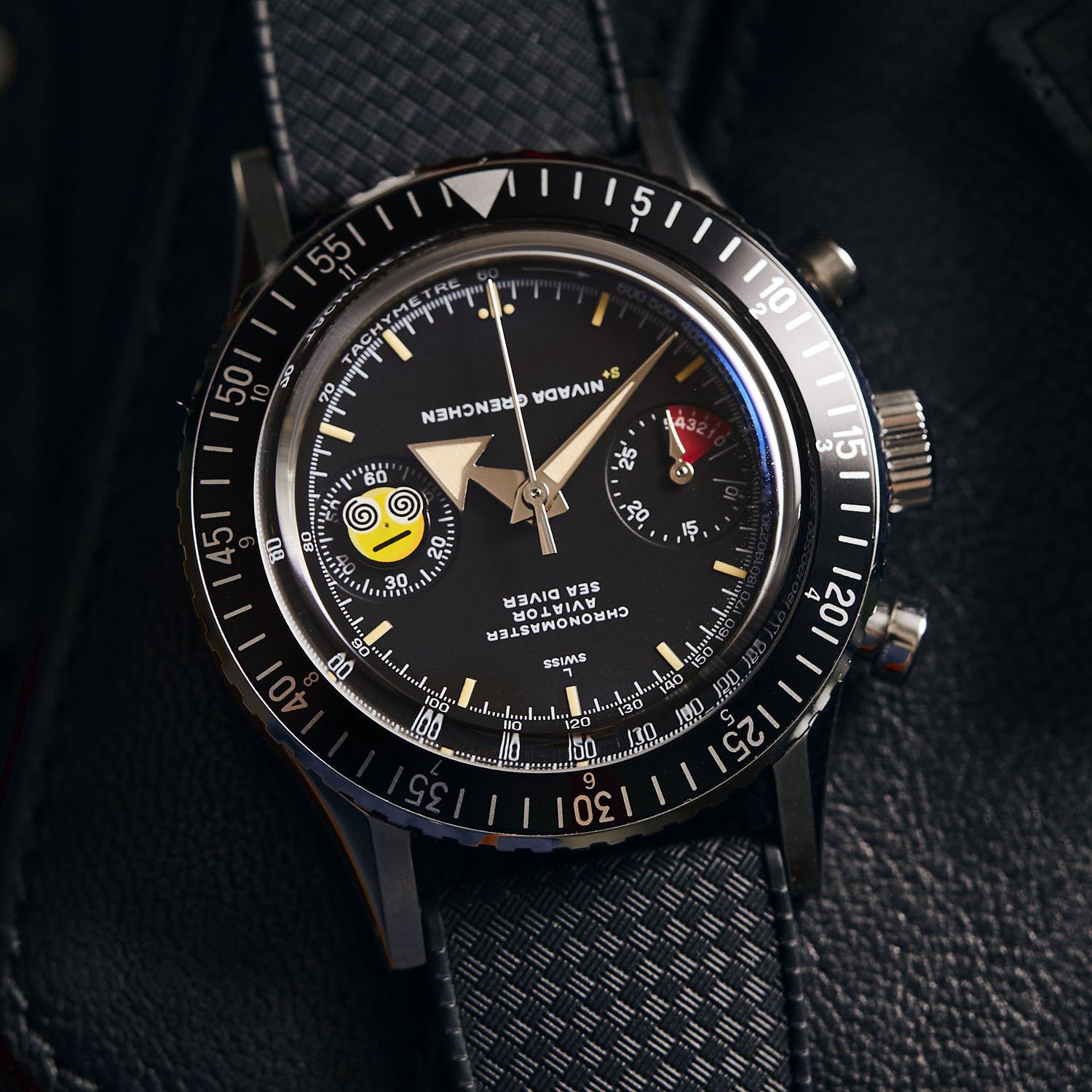 And now comes the twist… quite literally. Two things mostly make this watch – in fact, this trio of watches – unique. First and foremost, the text on the dial has been tilted 180-degree so it’s entirely upside down – and it goes for the logo, the name of the watch, and even the Swiss mention. You’ll see a small “+S” next to Nivada, the touch of Seconde/Seconde. It’s all quite confusing, but in fact, the display remains classic. It’s just playing with your brain a bit, but all indications are running normal, and are placed where they should. 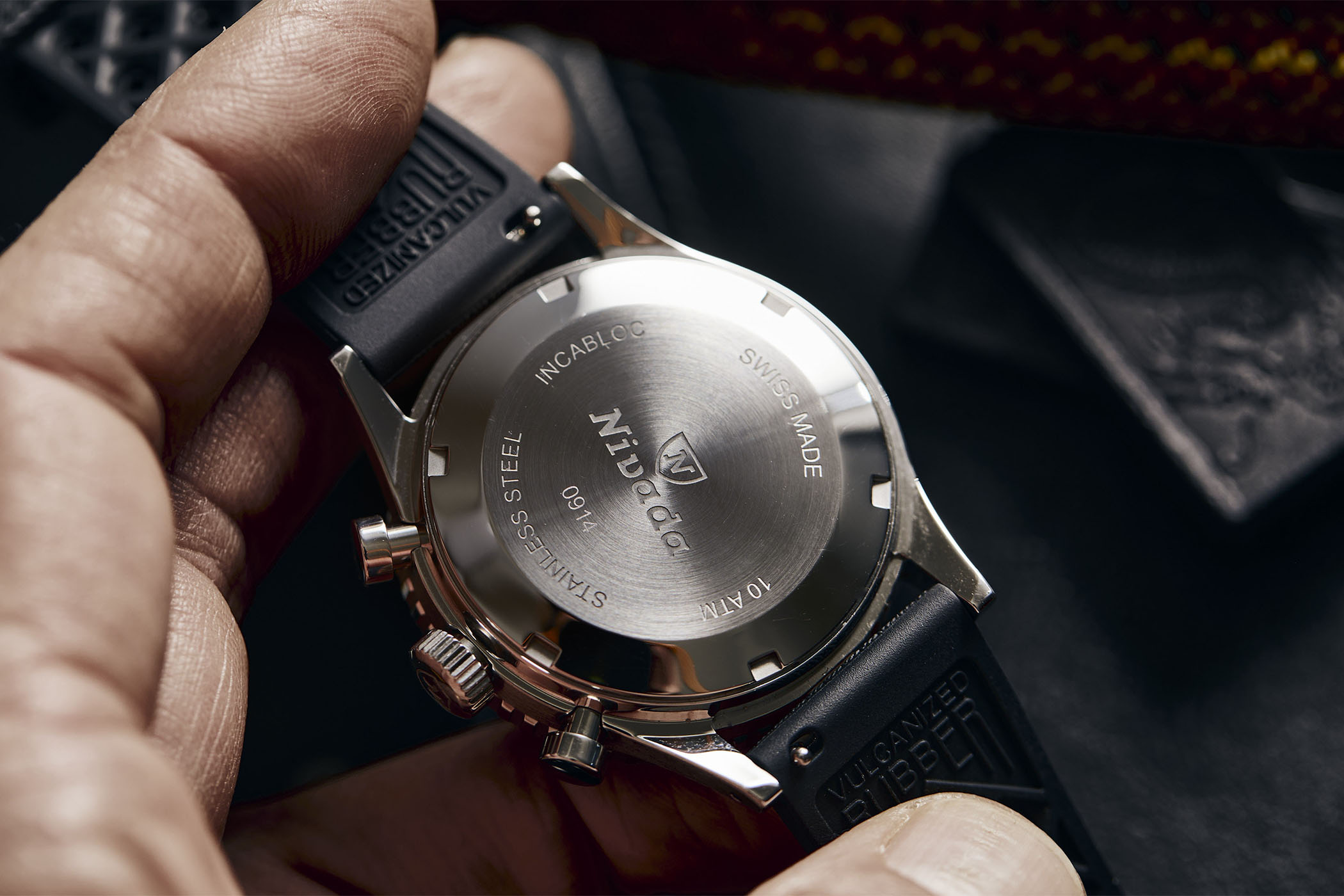 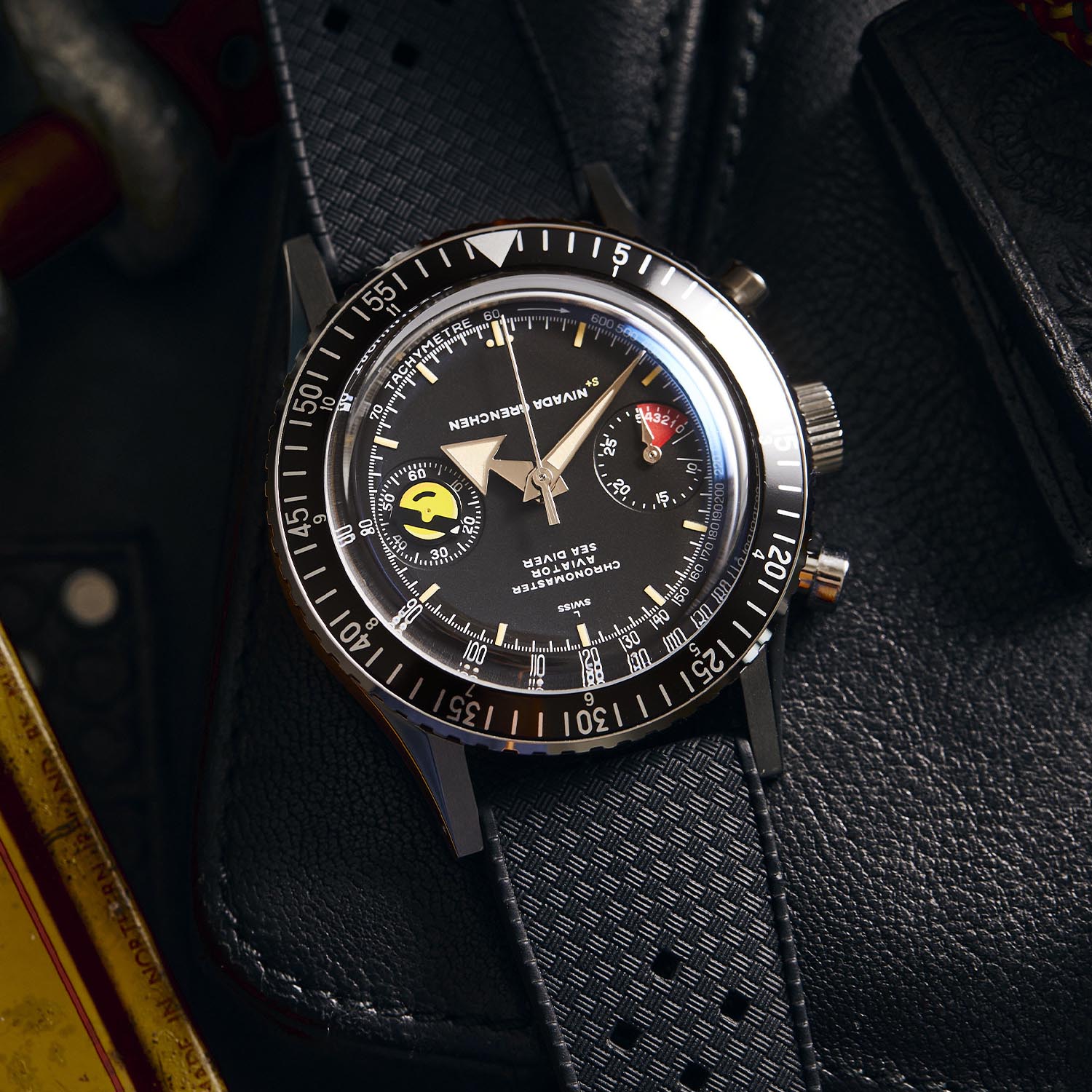 The second update found on the Nivada Chaosmaster is the small seconds… And there will be 3 options available. All 3 are shaped like an emoji. Designed by Romaric, they are either “Cool” with sunglasses, “Swirly” or “Sigh of relief” and are continuously spinning on the running seconds sub-dial. 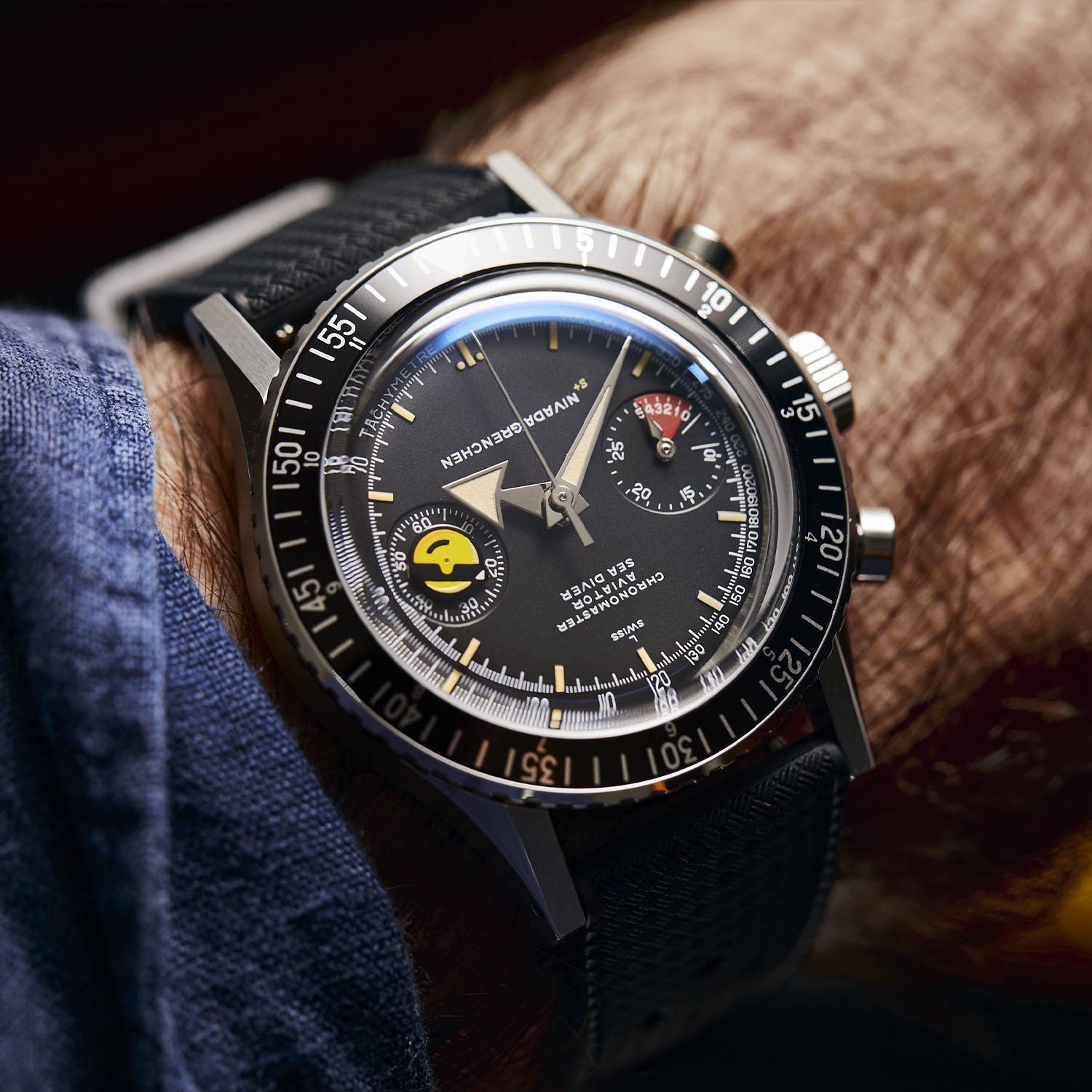 Each of the Time+Tide x Seconde/Seconde x Nivada Chaosmaster will be limited to 33 pieces (99 pieces in total). Also, 5 box sets will be offered, each with three different dial colours to set it apart from the standard release. The dials in the box set will be white, tropical and black. The watches are exclusively available from Time+Tide platforms and are priced at USD 1,995 (excl. taxes).