We often hear that the watch industry is lost in conservatism, turning around in circles, rehashing glorious vintage watches. Well, today, you won’t be able to say so. Certainly, the watch you’ll discover here isn’t for the faint-hearted, nor it will be unanimously liked. Surely it will create divisions, surely it will be seen as polarizing, surely it won’t leave observers indifferent. Surely, this is the goal here, as street artist Felipe Pantone has reimagined Zenith’s frenetic chronograph with his highly personal chromatic eye. Meet the striking, polarizing Zenith DEFY 21 Felipe Pantone. 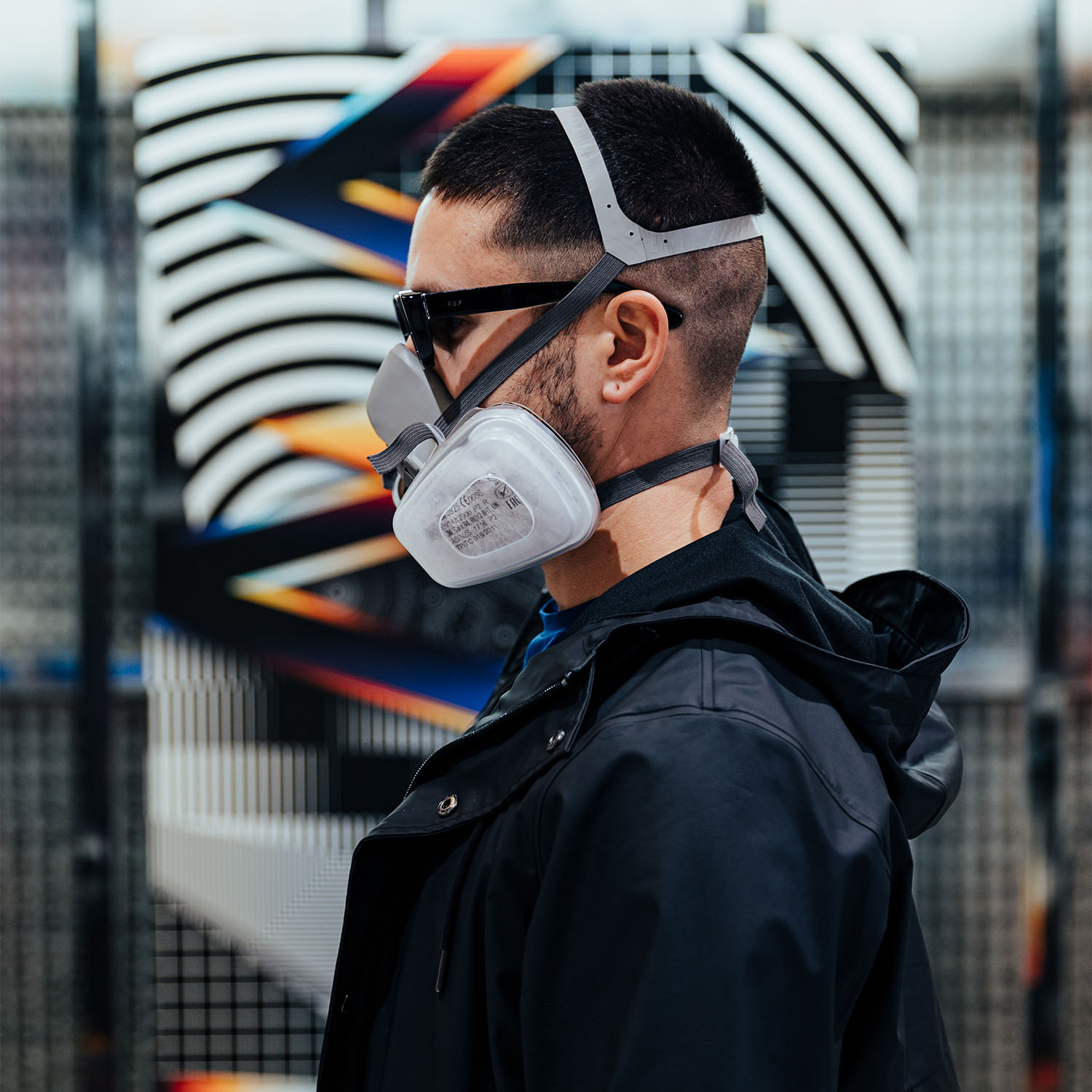 Felipe Pantone (born 1986) is an Argentine-Spanish contemporary artist. Pantone’s work is based on kinetic art, oversized installations, graffiti and design, characterized by the use of bold flashy colours, geometrical patterns and Op Art elements. His combinations rely on bright, gradient colours (neon colours, white and black), the 1980s, geometric patterns and colour bars used on TV. Felipe Pantone’s work is today coveted by art-lovers and those with an eye for radical design. Forbes magazine called his aesthetic “the intersection of Blade Runner and PhotoShop.” 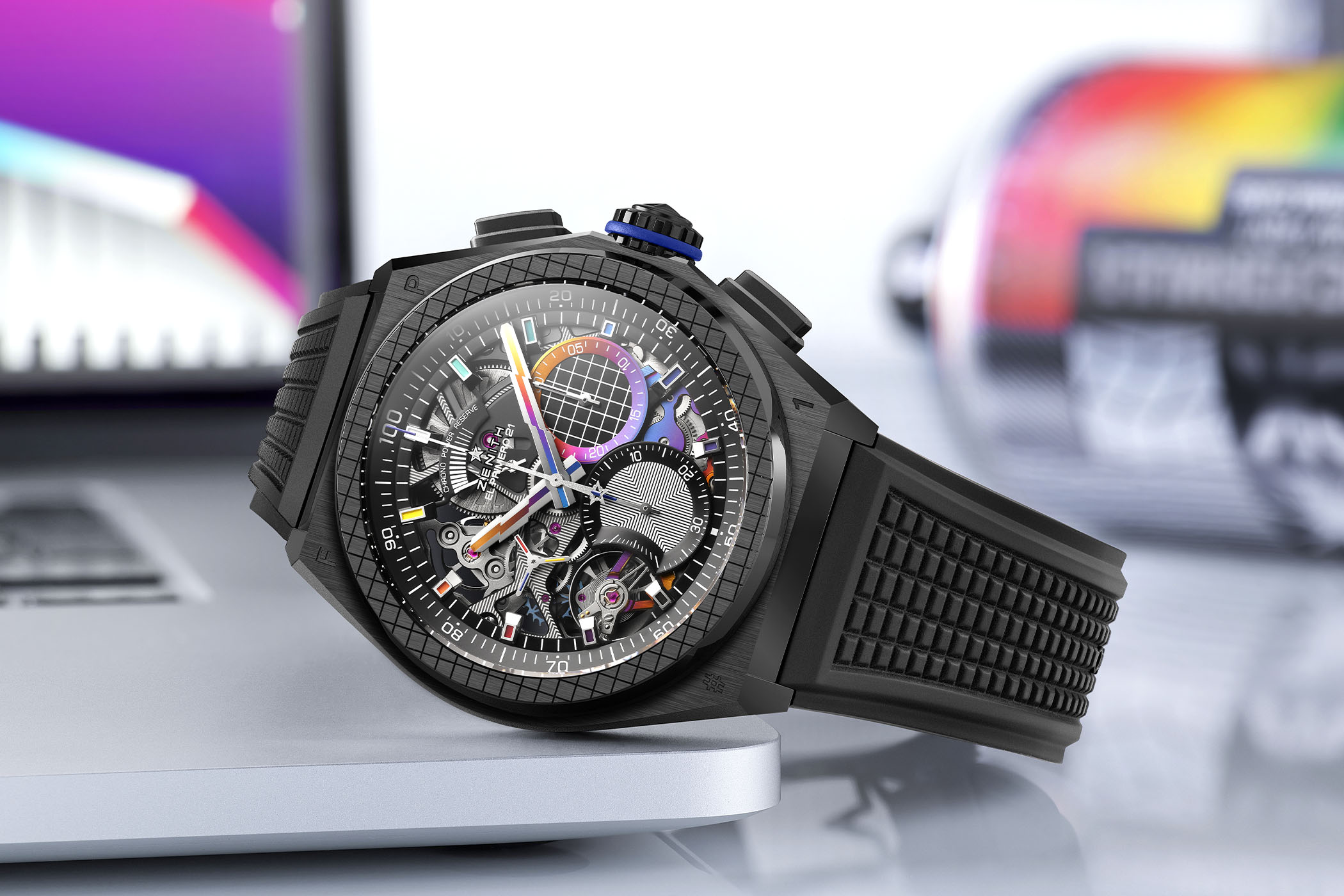 So what happens when you give a Zenith DEFY 21 Chronograph to a man like Pantone…? This, an unexpected, radical, striking, far from conventional, totally segmenting watch that won’t leave anyone cold. The typical “hate or love” watch. We won’t blame anyone here for finding this over the top, and we’re sure this is exactly what Zenith was looking for. The base for this Zenith DEFY 21 Felipe Pantone is well known, being this watch, which also served as a base for multiple collaborations, with Land Rover or Carl Cox. 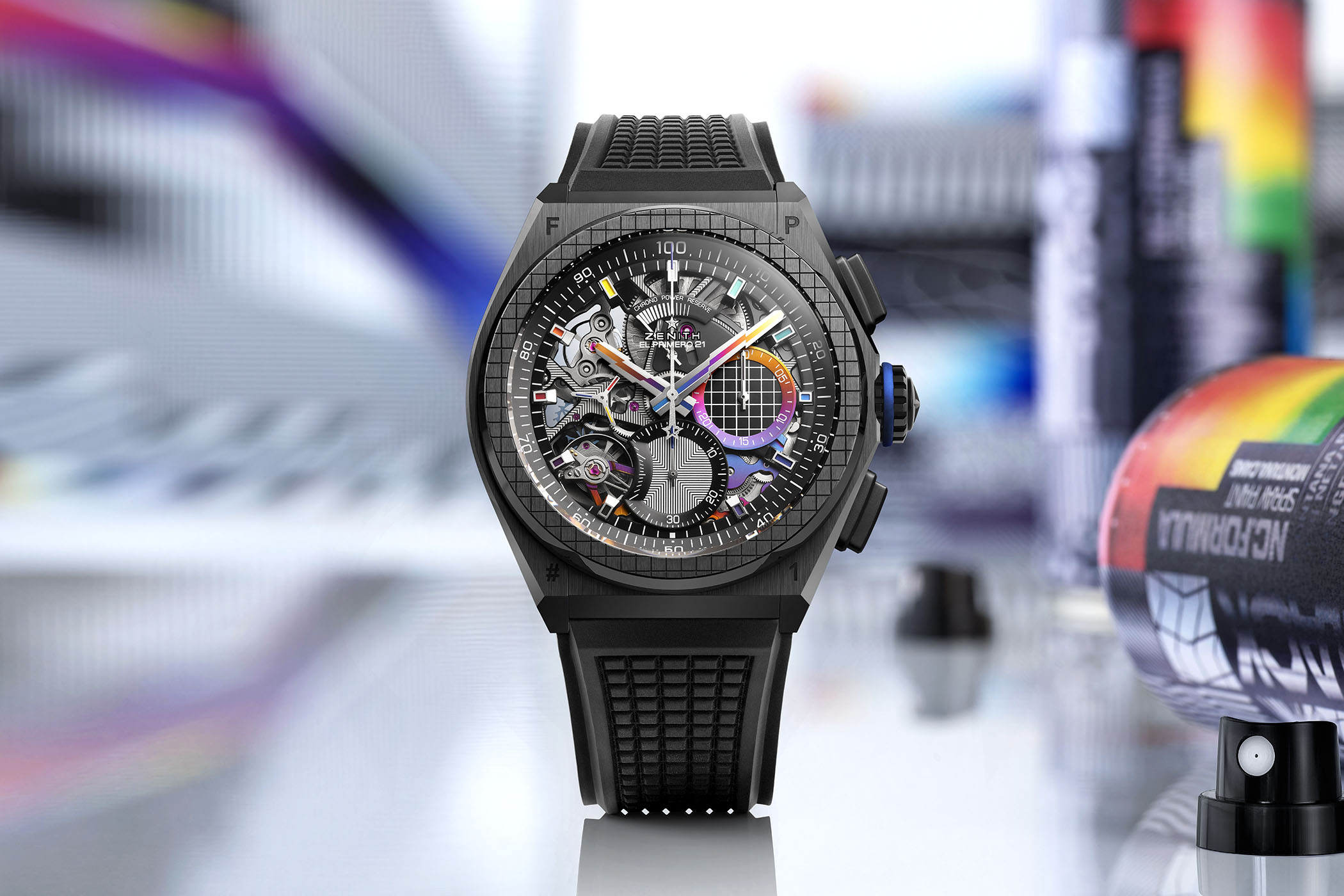 Starting from a black ceramic case of 44mm, the differences are obvious, such as the grid pattern engraved on the bezel, or the “FP#1” engraved on the four corners of the case, denoting “Felipe Pantone El Primero.” What’s even more blatant is the work done on the dial and movement, both fully reimagined by Pantone with his personal codes. One of its most striking features are the multi-coloured bridges, indexes and sub-dial – all coated with a unique process that reflects a gradient of metallic rainbow tones (executed with three-dimensional PVD with silicon particles).

The central hours and minutes hands are no less striking, with a distorted look resembling the lightning bolts found in Pantone’s work, again with a rainbow gradient of colours. Finally, the bridges have a moiré optical effect produced by thin alternating white and black bands, miniaturized and reproduced by laser engraving on the top bridges and portions of the dial of this Zenith DEFY 21 Felipe Pantone. 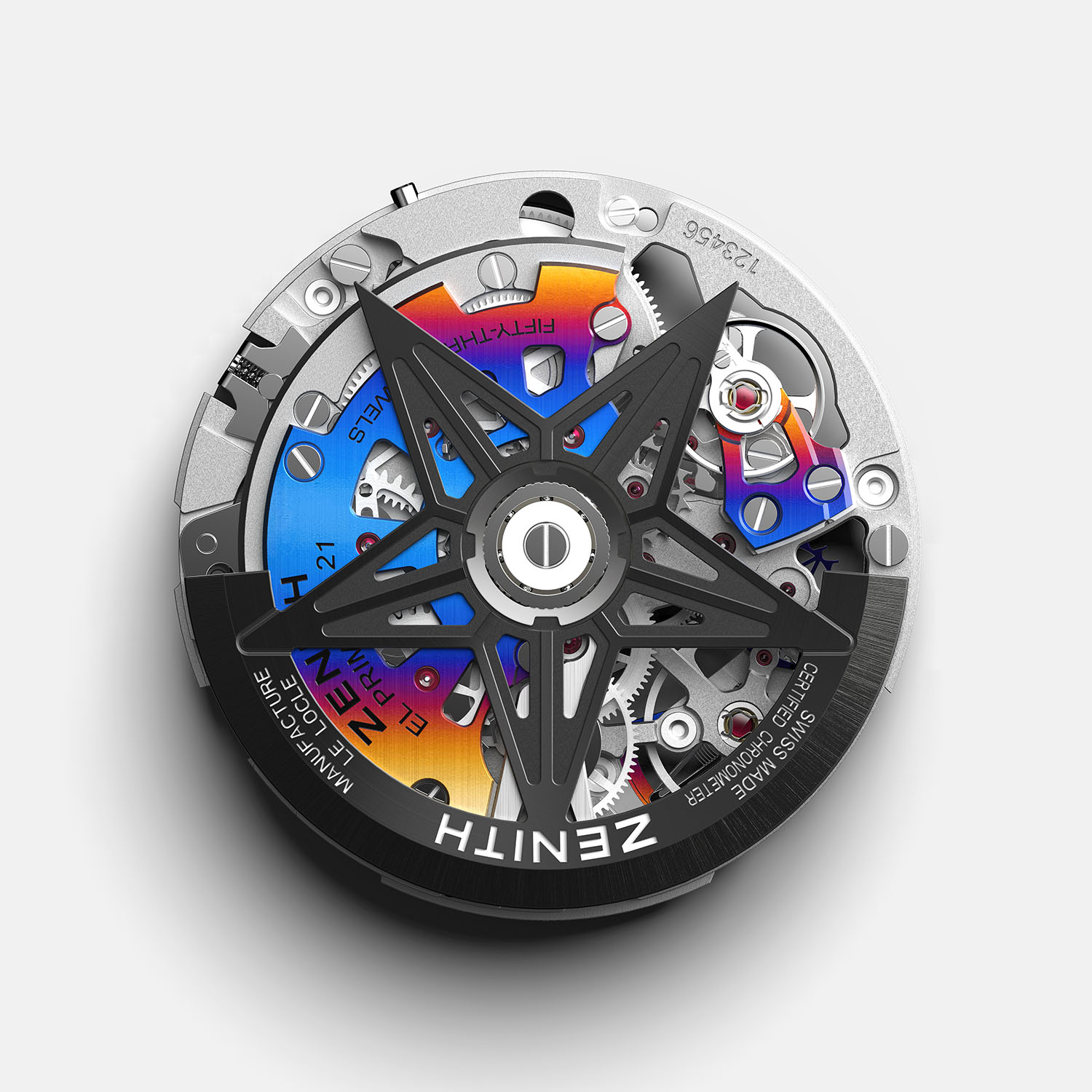 The movement of this Zenith DEFY 21 is also special. Visually first, as once again some of the bridges have been coated with the bold rainbow gradient effect. But also mechanically, since this movement isn’t your typical El Primero calibre. While known for its high frequency of 5Hz, which is here used for one of the two regulating organs (the one in charge of timekeeping), there’s a second ultra-high frequency regulator which is devoted to the chronograph only, beats at 360,000 vibrations/hour (or 50hz) and thus allows displaying chronograph indications to the 1/100th of a second. The central seconds hand of this El Primero 9004 rotates once per second. And to keep the two independent escapements running smoothly, the movement is also equipped with two barrels providing a power reserve of approximately 50 hours. The movement is chronometer-certified by Time Lab. 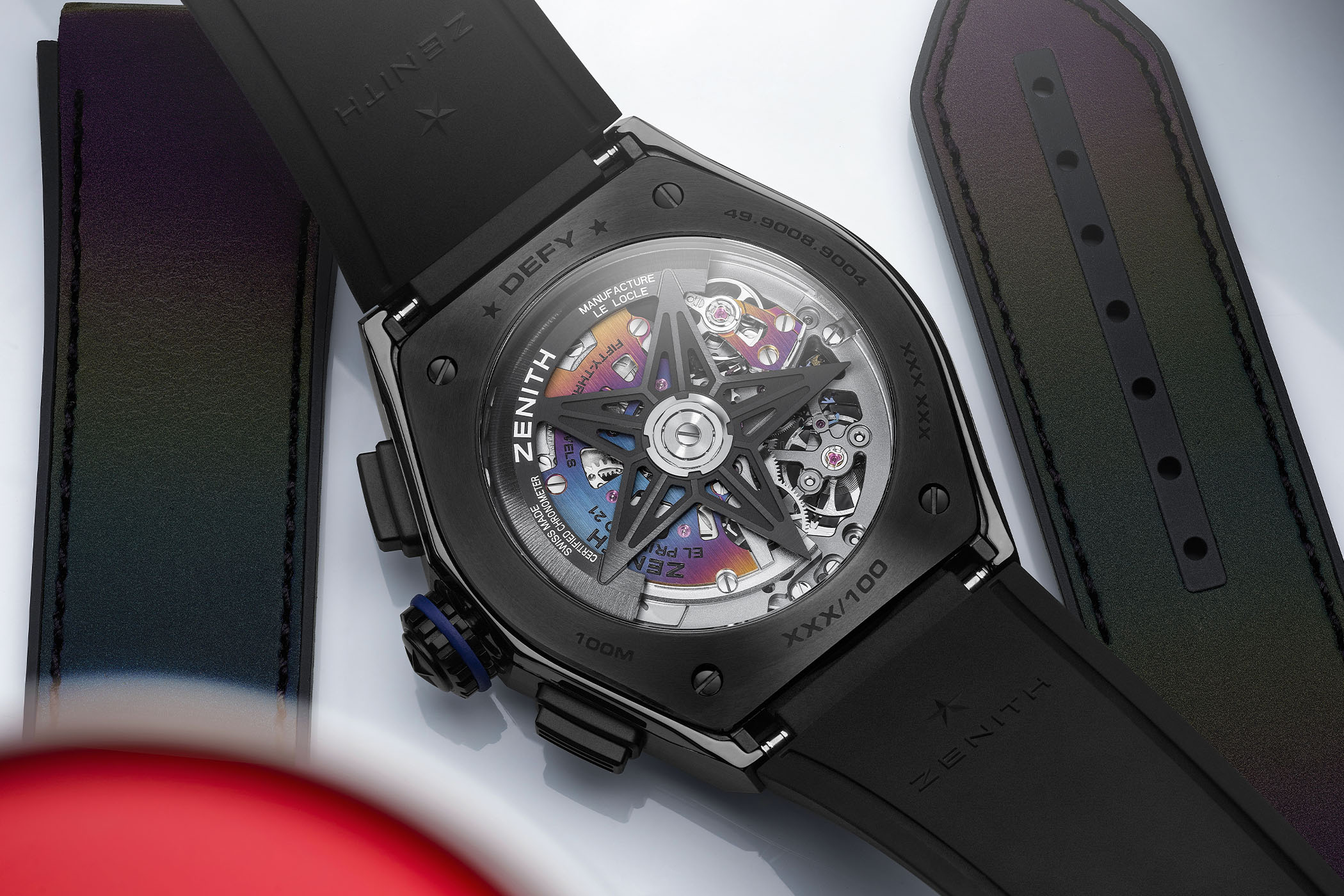 The Zenith DEFY 21 Felipe Pantone is delivered with two straps. First is a relatively classic black rubber strap with a grid pattern, recalling the bezel. For those who want the full chromatic look, the watch also comes with a second rubber strap, with a central insert that goes from dark grey to a flash of all the colours in the spectrum, depending on the angle of light. The colours are not actually embedded in the strap but are the result of iridescence caused by the surface of the material and how it reflects light. 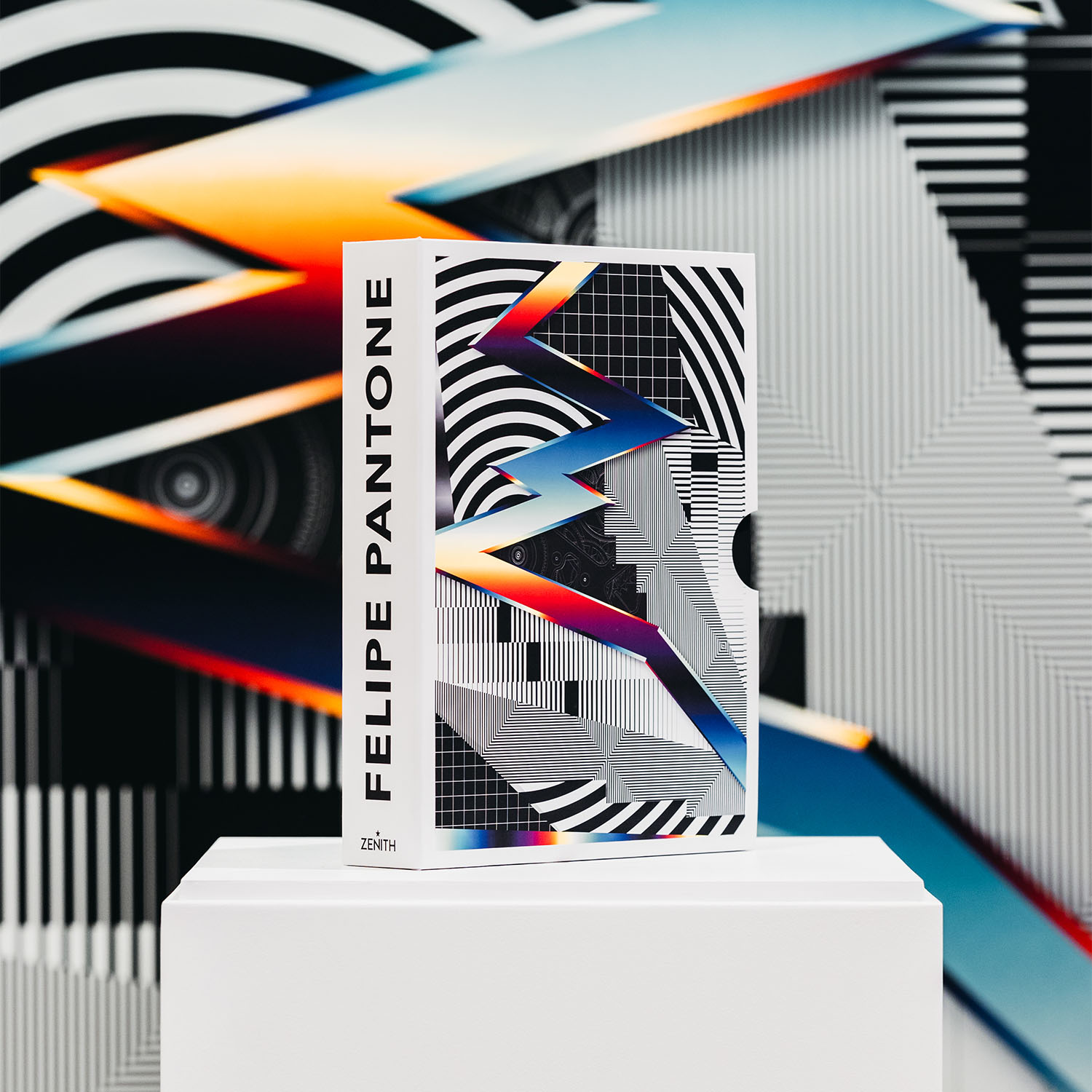 The watch is delivered in a presentation box that mimics a hardcover book, with a miniaturized painting that Felipe Pantone created exclusively for this special series. The Zenith DEFY 21 Felipe Pantone will be a limited edition of 100 pieces, available on March 15, 2021 from Zenith Boutiques and on the Zenith online shop. It will be priced at CHF 18,900.