If we talk about French watchmaking, some names will resonate stronger than others and Yema certainly is amongst the most famous brands to have ever existed. For a few years, the French house has refocussed its production on (mostly) mechanical and emblematic models, which implied reviving what’s probably the most iconic dive watch to ever come from France, the Yema Superman. We’ve seen multiple vintage-oriented iterations following its initial comeback, or evolutions with different functions. It is time now for the dive watch to evolve and to be upgraded, as Yema launches the new Superman 500, a technically revamped watch that retained the iconic design of the collection. 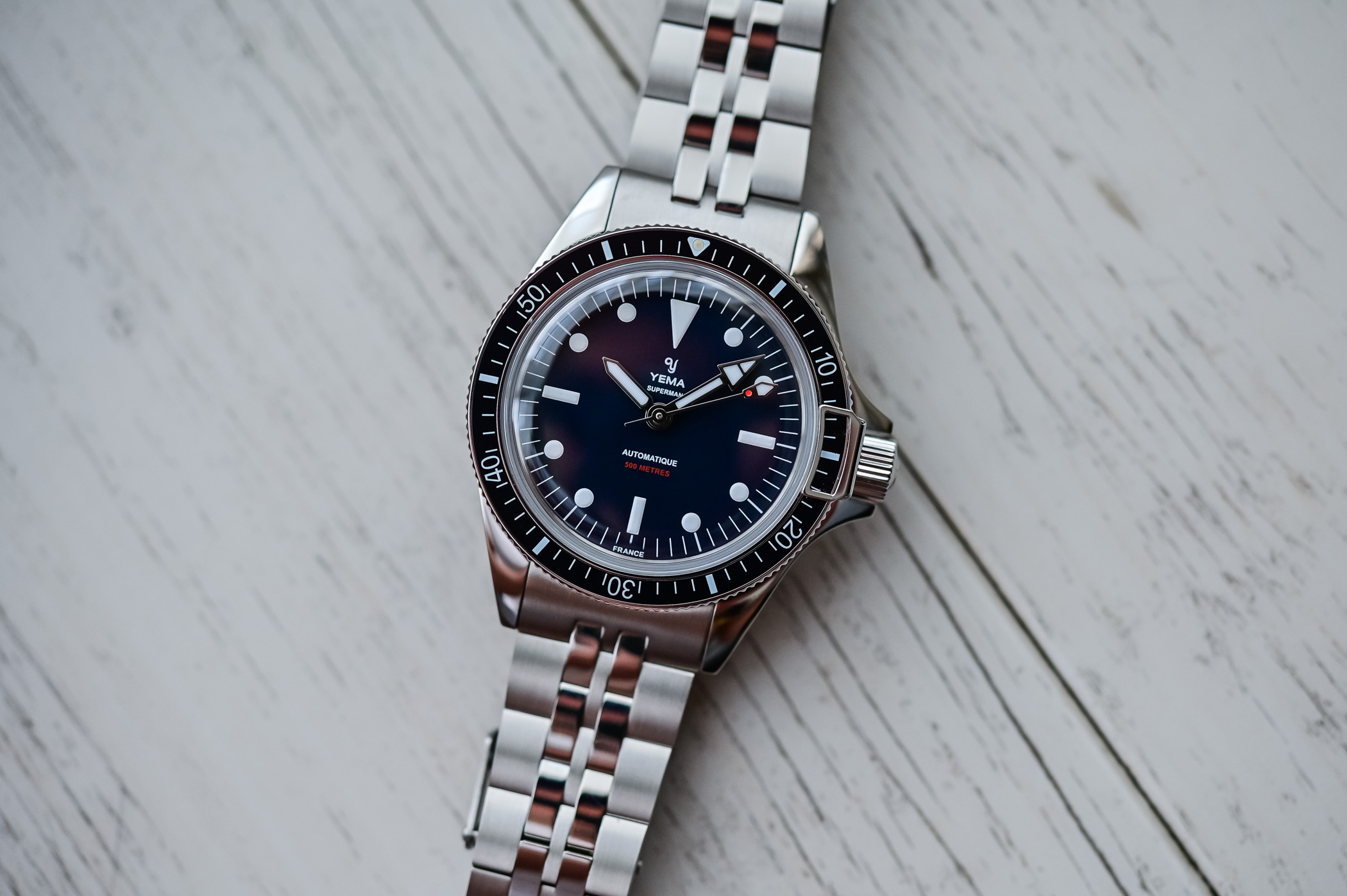 Based in the town of Morteau, France (near the Swiss border, in the Jura mountains), Yema has definitely left its mark in a crowded industry. Together with a few other important names, Yema has been on top of the list of French manufacturers and has long focused its production on sports watches for divers, pilots or racing drivers… and even made it to space. Part of this professionally-oriented collection, the Superman is the brand’s most iconic (and perhaps most iconic French watch), and Yema has faithfully revived it in recent years.

While most dive watches produced from the mid-1950s to the early 1960s were intended for professional use, Yema started to work on a watch with almost equivalent specifications but dedicated to a wider audience of aficionados and recreational divers. Launched in 1963, the Superman immediately impressed the dive watch community with its impressive 300m water-resistance and unique bezel-lock device. In past years, we’ve seen multiple re-editions of classic designs of the past, such as the almost 1-to-1 Superman Heritage or the more original Skin Diver Limited Edition. And while all were basically sharing the same specifications as the original, 1960s/1970s watches, Yema decided it was time for its icon to enter the 21st century with beefed-up specifications and upgrades. 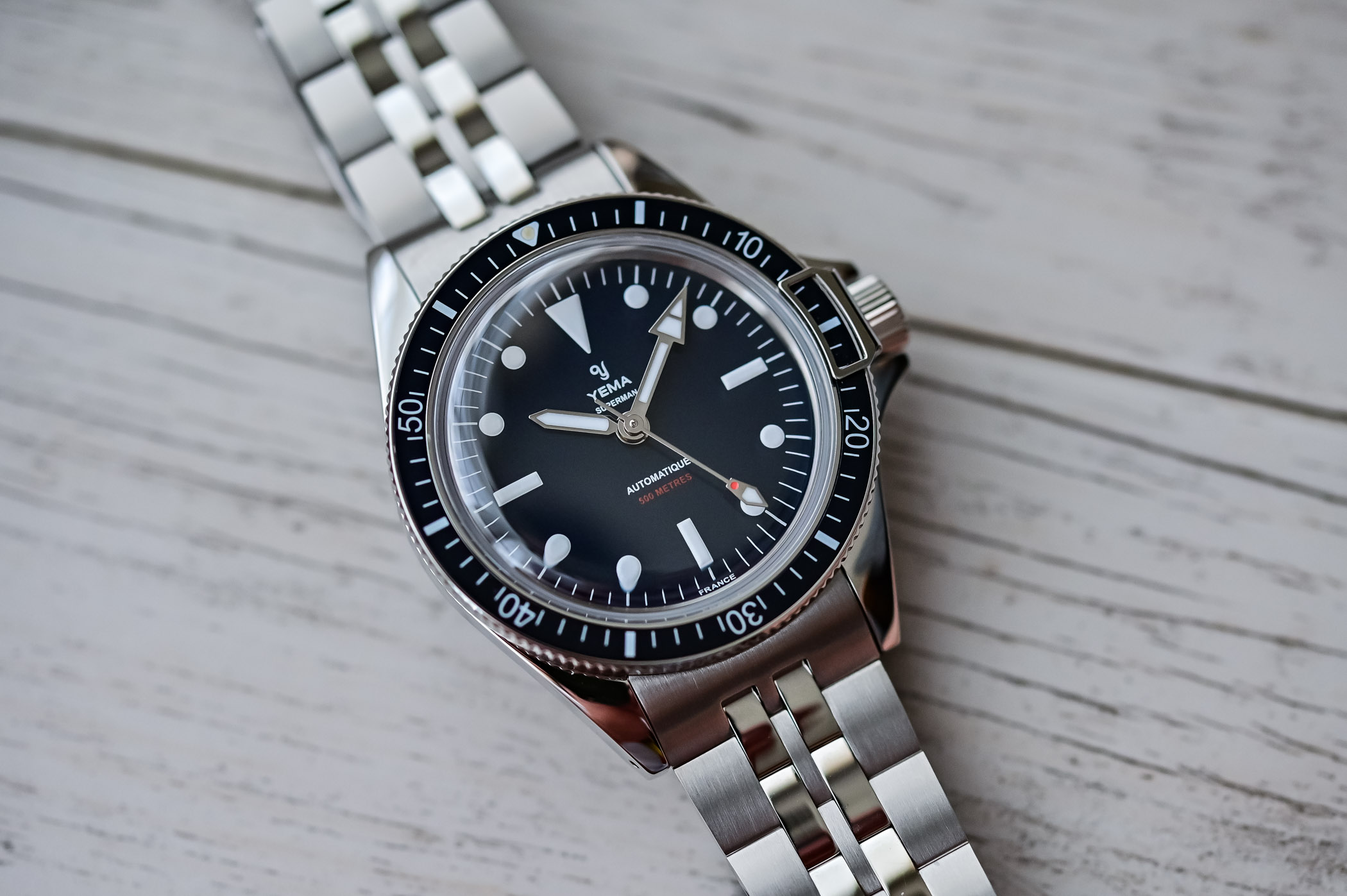 What’s important to know with this new Yema Superman 500 is the fact that what we love in this watch is intact, and only what’s “under the hood” has been upgraded. As such, the design sticks to the emblematic shape of the Superman, as we’ve come to enjoy in the past and in recent re-editions. Available in 39mm and 41mm cases (here photographed in 39mm), the Superman 500 feels and looks like it should with such a name on the dial. The thin, elongated “skin diver” shape is there, and so is the all-important crown and locking device, the thin bezel and the raised crystal. Details such as the pointy lugs with holes, and the equally sharp crown guards, have been kept too, making sure that the overall feeling of a vintage Superman will be there. 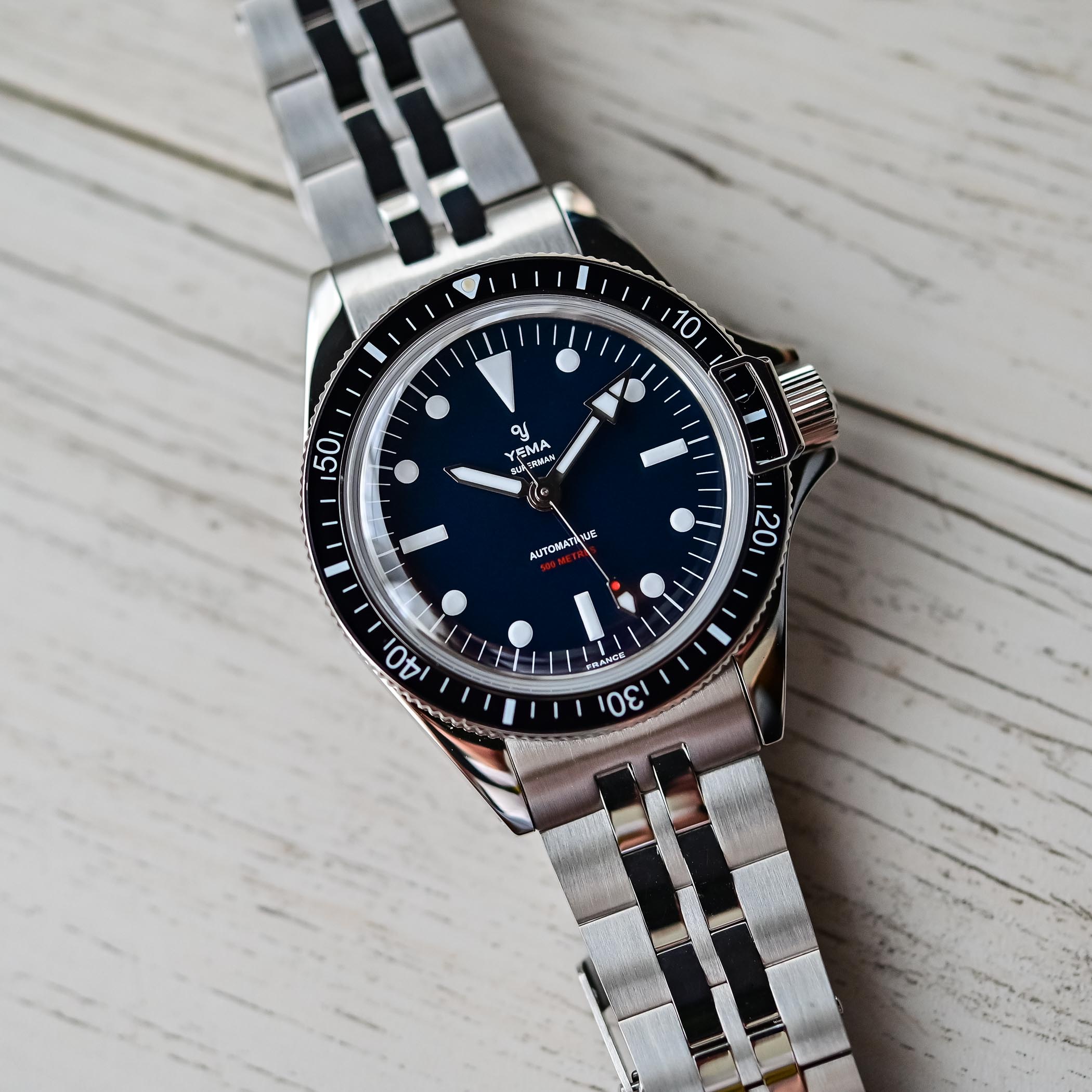 But, and that’s the good part here, the specifications, the diving capacities and the overall quality have been improved. First of all, the bezel-lock device, which makes sure that once the crown is screwed, the bezel stays firmly in place, has been redesigned for more stability with the crown tube (thus more reliability and resistance). The locking device is now more firmly in place and more precisely adjusted. The bezel itself has also been slightly redesigned, but the fully graduated 60-minute insert in anodized aluminium and luminous pearl at the 0 mark is intact. In the same vein, Yema has reworked the gaskets of the crown. As such, it is now possible to adjust the bezel under shallow waters, as the watch is water-resistant to 30m with the crown unscrewed. It’ll possible to adjust the bezel even below the surface, which wasn’t the case in the past.

Another important point, explaining the name of this Yema Superman 500, the overall water-resistance has been upgraded to 500m, thanks to the work done on the crown, but also on the caseback – which is now 2.2mm thick instead of 1.5mm. In the same vein, the double-domed sapphire crystal on top of the watch, which retains its vintage “plexiglass-like” design, has been reshaped for better resistance to pressure. It’s still 2.6mm in height but now deeper inserted into the watch to minimize the effect on the overall height, and its diameter has been increased by 0.6mm for improved legibility. Small details, but the result is a real dive watch that has a reasonably thin profile, being 13.4mm in total. And the thin casebands and bubble-like caseback help to visually reduce the height once on the wrist. 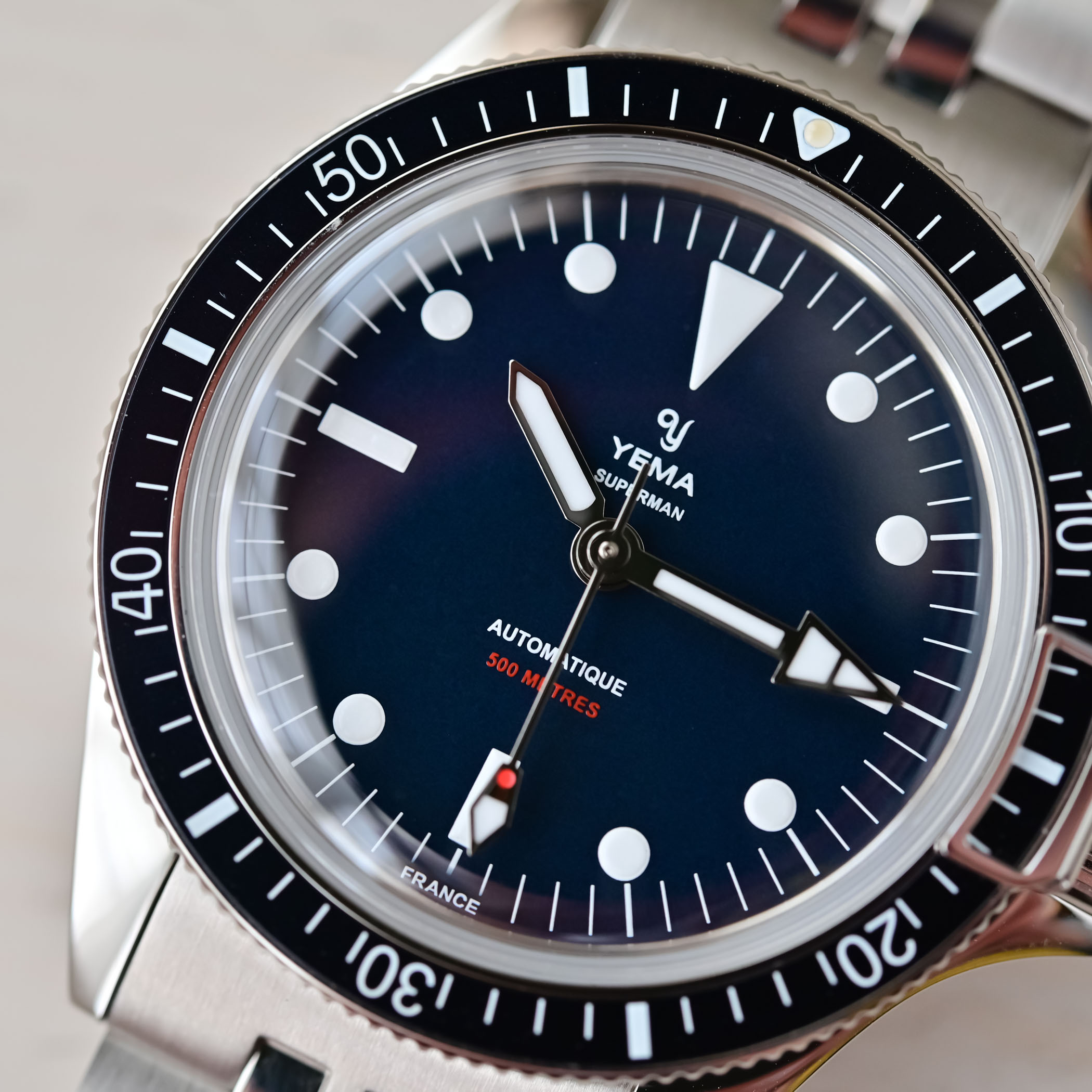 The Yema Superman 500, as said a modernized, upgraded version of the emblematic watch, is launched in two versions. First is a classic black dial/bezel model, with light-beige luminescent material on hands and markers. The second version, slightly more modern (the one you can see in this article), has a navy blue dial and bezel insert, with white luminescent markers and hands. The dial, free of a date window for a more focused look, is glossy on both editions and has minimal text. The markers are painted and time is read by the mean of classic polished steel Superman hands, including the shovel-like seconds hand with a red dot. The depth rating is printed in red on both editions. 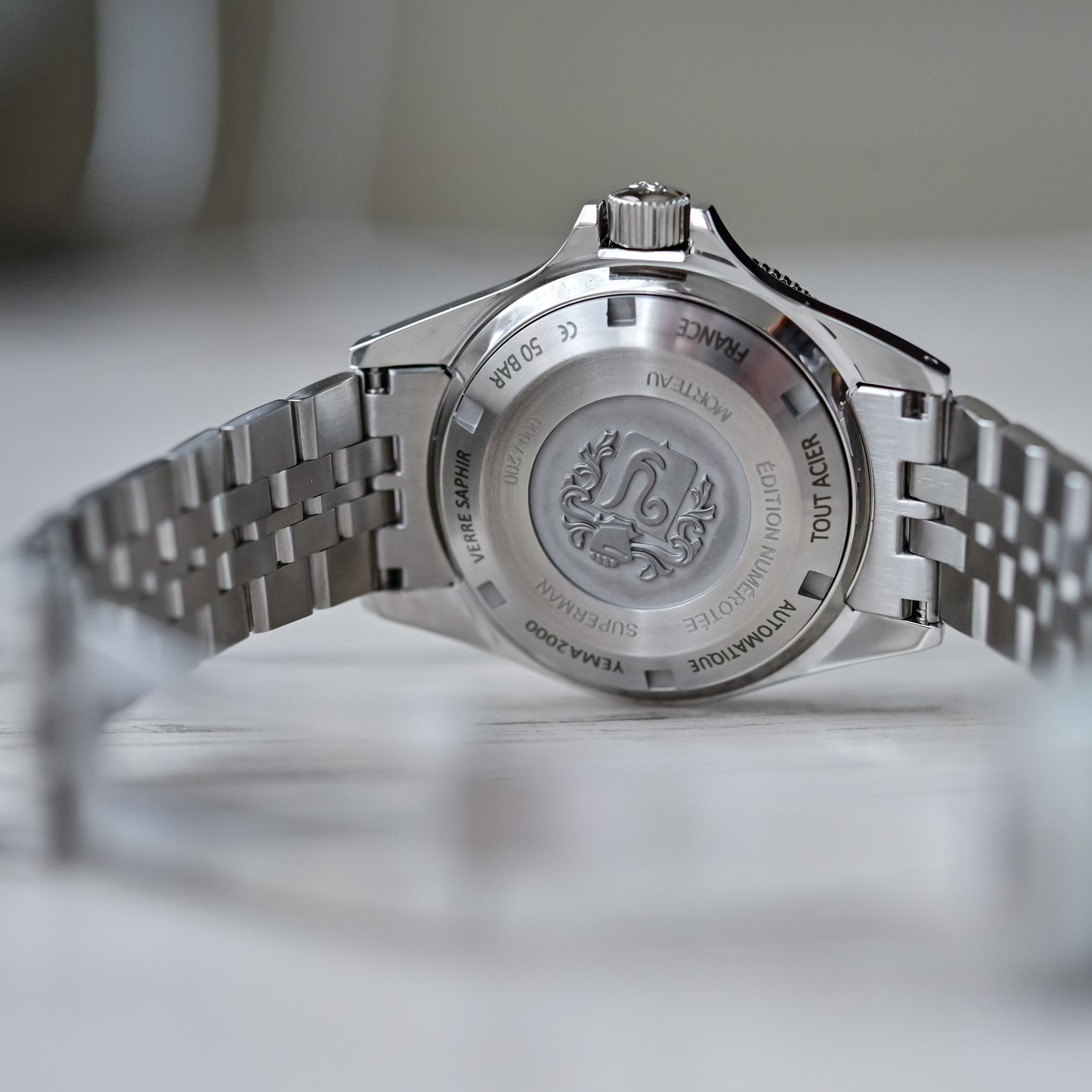 Inside the case is another step into the “Frenchness” of this watch. While the Superman Heritage was powered by a Swiss automatic Sellita, this new Yema Superman 500 relies on the in-house designed and assembled Calibre YEMA2000. An alternative to its Swiss counterparts, its French origin suits perfectly the watch. This automatic movement, with 29 jewels, 4Hz frequency and 42h power reserve features a bidirectional rotor on ball bearings and is here adjusted to +/- 10 seconds per day.

The Yema Superman 500, whether the black or blue edition, can be ordered on a vintage-like leather strap with pin buckle, an FKM black rubber strap with folding clasp or a classic Superman multi-link steel bracelet, with brushed and polished surfaces. The latter comes with a folding clasp with micro-adjustment holes and a diving extension. 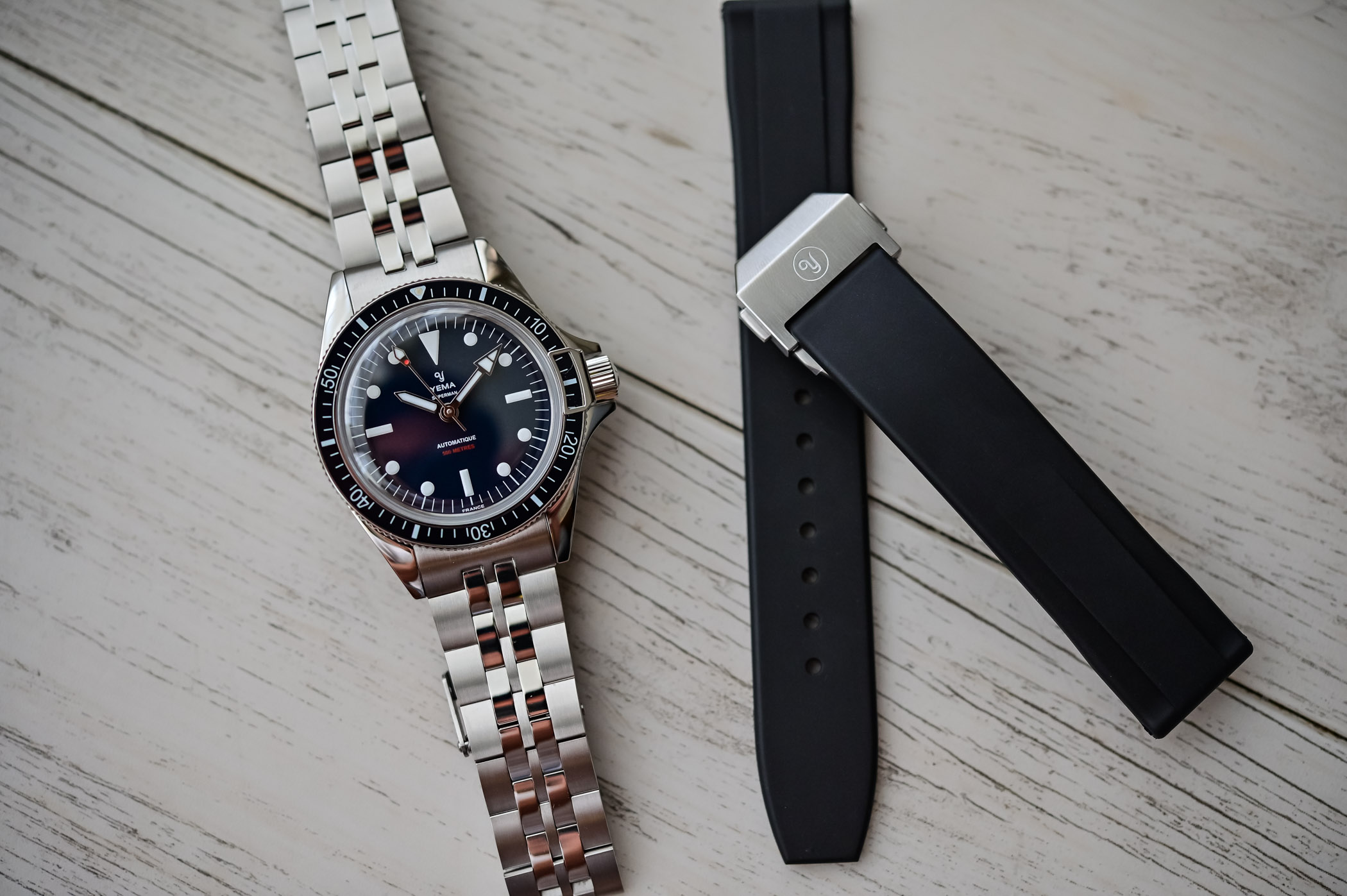 The Yema Superman 500 will be part of the permanent collection. For now, the first 200 pieces, which will be available as of Wednesday 29 June 2022, will be individually numbered on the back. Prices will be EUR 1,049 on leather, EUR 1,190 on steel bracelet and EUR 1,219 on FKM rubber strap – which is the same price range as a Superman Heritage, despite the technical upgrades.