Discontinuations happen all the time, with brands releasing new products to replace old ones. In some cases, it’s hard to understand why exactly, as a decision to drop a model raises a few eyebrows and questions here and there. It is a constant evolutionary process though, so there’s no time to be sorrowful for too long. Romain Gauthier recently announced it will discontinue its superb Logical One for multiple reasons, one of which is to explore future possibilities. But before it moves to the archives, the watch gets its final send-off with two special farewell models. Here are the Romain Gauthier Logical One Final Editions.

The year 2023 will mark the tenth anniversary of the Logical One by independent watchmaker Romain Gauthier. The complex watch launched the brand into stardom with a fusée-and-chain constant force mechanism placed on the dial side of the movement. The incredible mix of traditional watchmaking techniques, modernistic design elements and outstanding finishing made it a collector’s favourite. 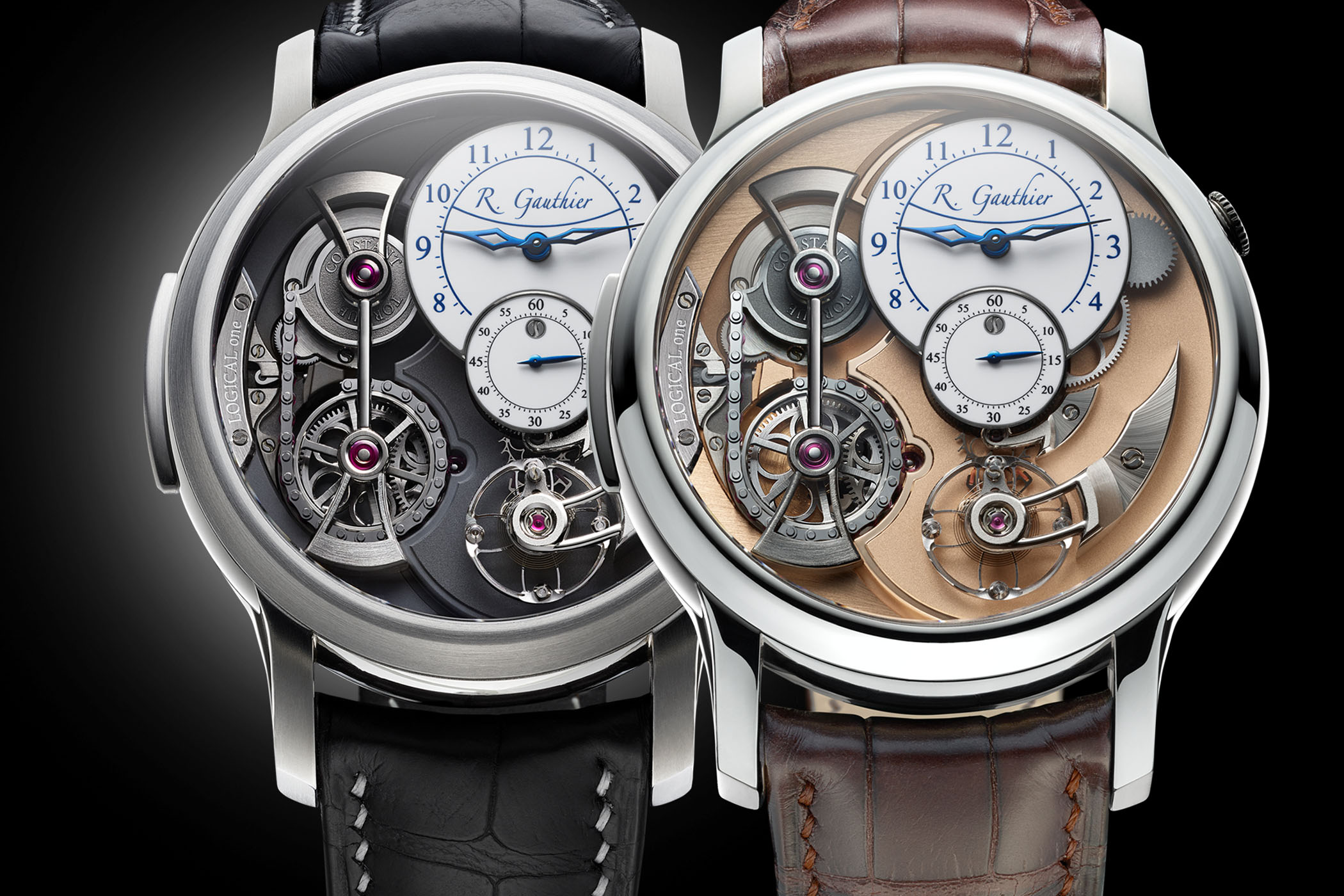 The Logical One was launched in 2013, and that year it won the Men’s Complication Watch Prize at the GPHG. It displayed an unusual but captivating mix of traditional techniques and modern design. It featured unique solutions in the quest to achieve a true constant force mechanism. As explained in detail in an article we published quite a while back, it featured an innovative system bases on a 15th-century invention; the fusée-and-chain mechanism. It was one of the earliest attempts to achieve constant force delivered to the regulating organ. 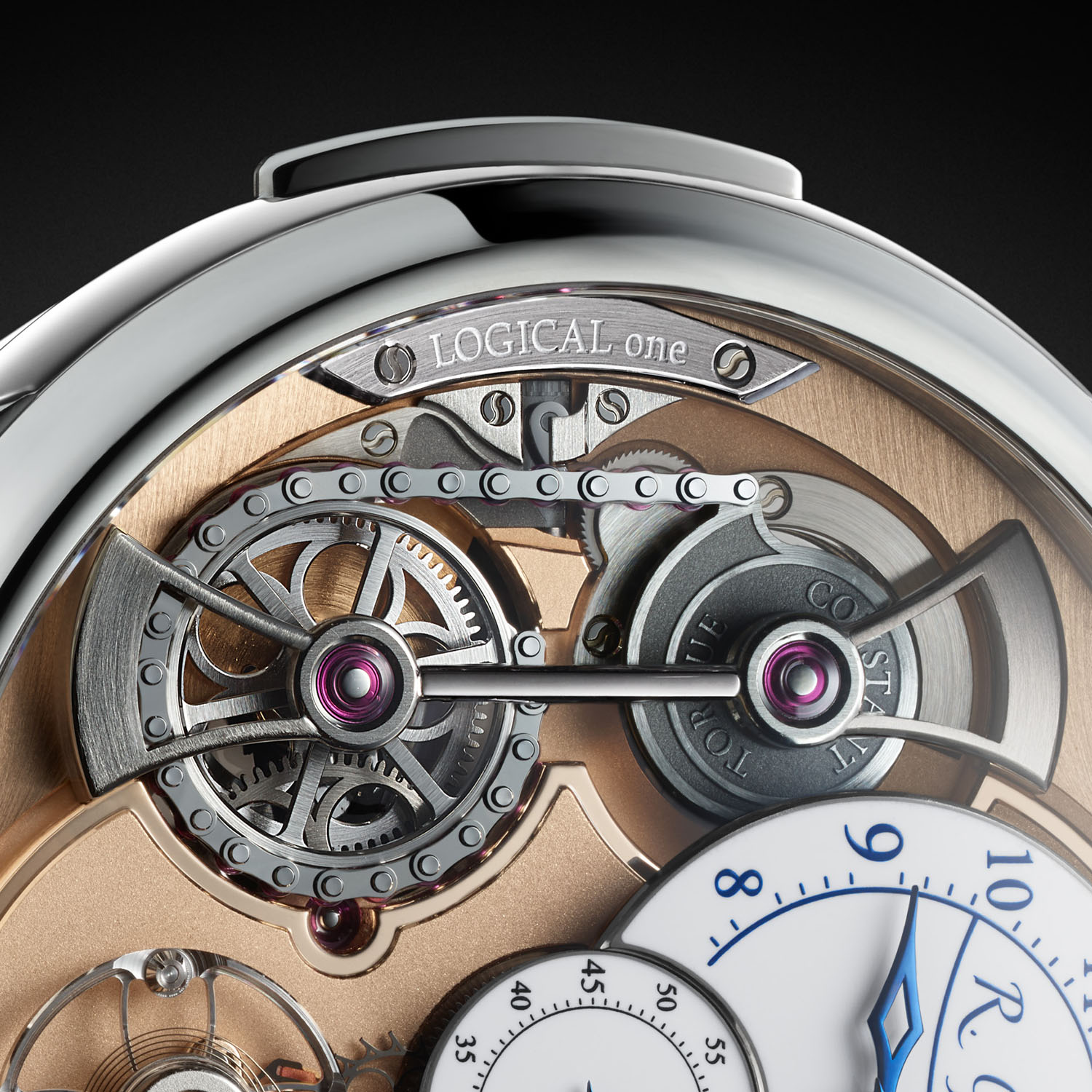 The fusée-and-chain system works similar to the gearing in a bicycle. A miniature chain is connected to a snail-shell shaped cam (replacing the traditional cone-shaped fusée) on one end and to the barrel on the other. The increasing circumference of the snail-shell cam increases the leverage and thus compensates for the diminishing torque found in regular movements. The Logical One is a unique take on the concept since the snail-shell cam, chain and barrel-wheel that make up the fusée-and-chain mechanism all operate on the same plan in the movement.

In most other fusée-and-chain mechanisms you will find a cone-shaped pully and a tall barrel that the chain wraps around when it winds/unwinds. When the mainspring is fully wound it pulls on a smaller radius of the fusée. In the process of unwinding, the radius increases and as such the leverage and torque increase. The result is that throughout the entire unwinding of the mainspring the torque remains as constant as possible. The small chain is made up of steel links and synthetic rubies in between to reduce friction.

Another of the innovative solutions Romain Gauthier came up with was the ergonomic placement of a winding pusher at 9 o’clock. I believe that to this day it is the only watch available that has a pusher instead of a winding system operated through a crown. Time is set through the crown positioned at 2 o’clock, separating the winding from the setting mechanism. 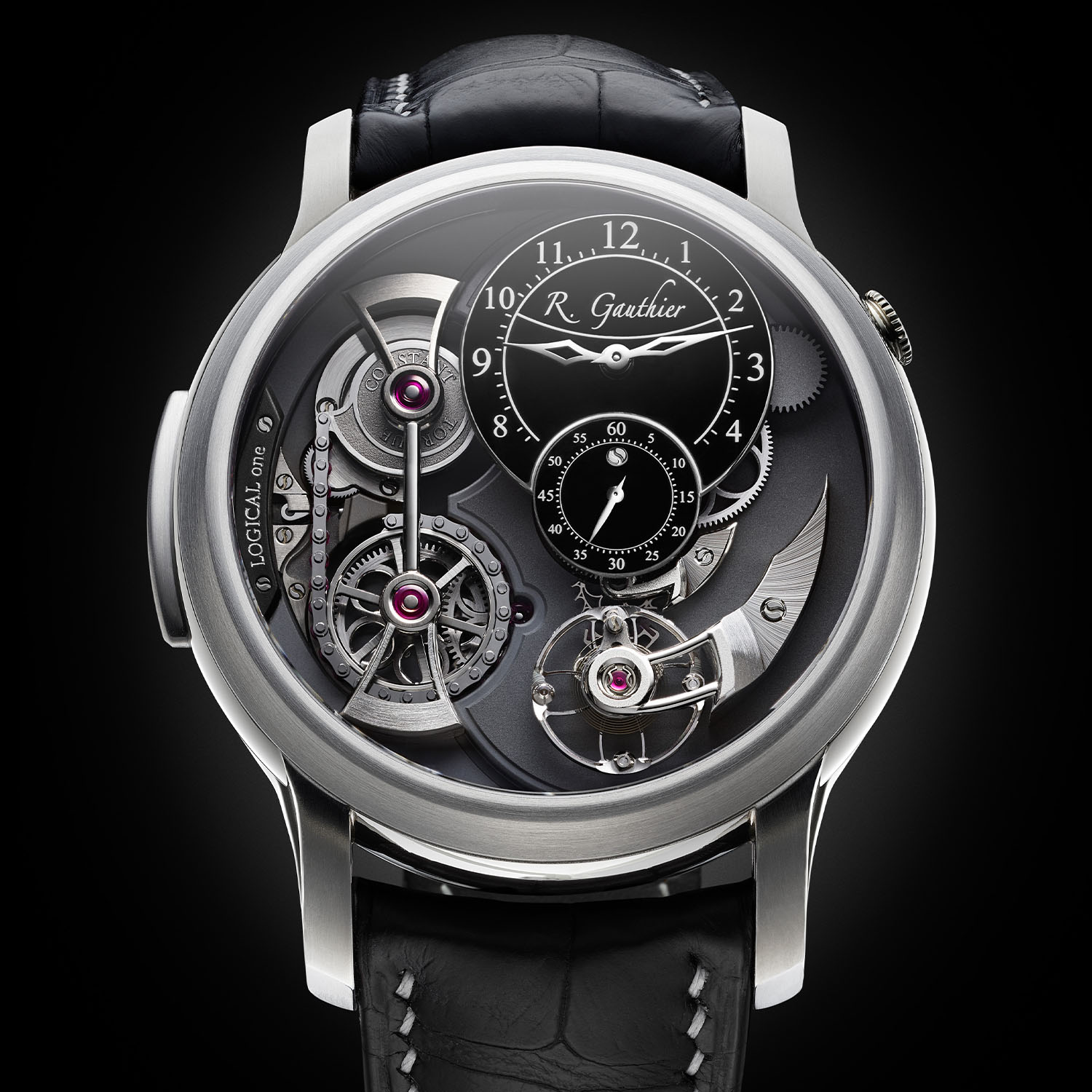 Almost all 359 components in the movement for the Logical One are constructed in-house by Romain Gauthier. This includes some of the most challenging parts in watchmaking, often outsourced due to the sheer complexity to get right. Cutting the hairspring for instance, an industry within the watchmaking industry in its own right, is done by Romain Gauthier’s craftsmen. The bespoke balance wheel has curved arms and calibrated eccentric weights and a handmade triangular pallet lever.

Like with all Logical One’s that came before these two, the finishing of the movement is simply superb. It is decorated with snailing, frosting, straight and circular graining and hand bevelled edges. These bevels have a rounded profile, known as a bercé finish, something that is incredibly hard to master. The trick is to get the curvature spot on and even though the whole shape of the bridges. The mainspring barrel bride alone takes approximately 3 months from start to finish. The wheels feature circular spokes, and all visible screws feature S-slotted hands allowing for more torque when assembling. Flip the watch over and you will discover a power reserve indication and the barrel and its two sapphire plates to eliminate uneven friction. 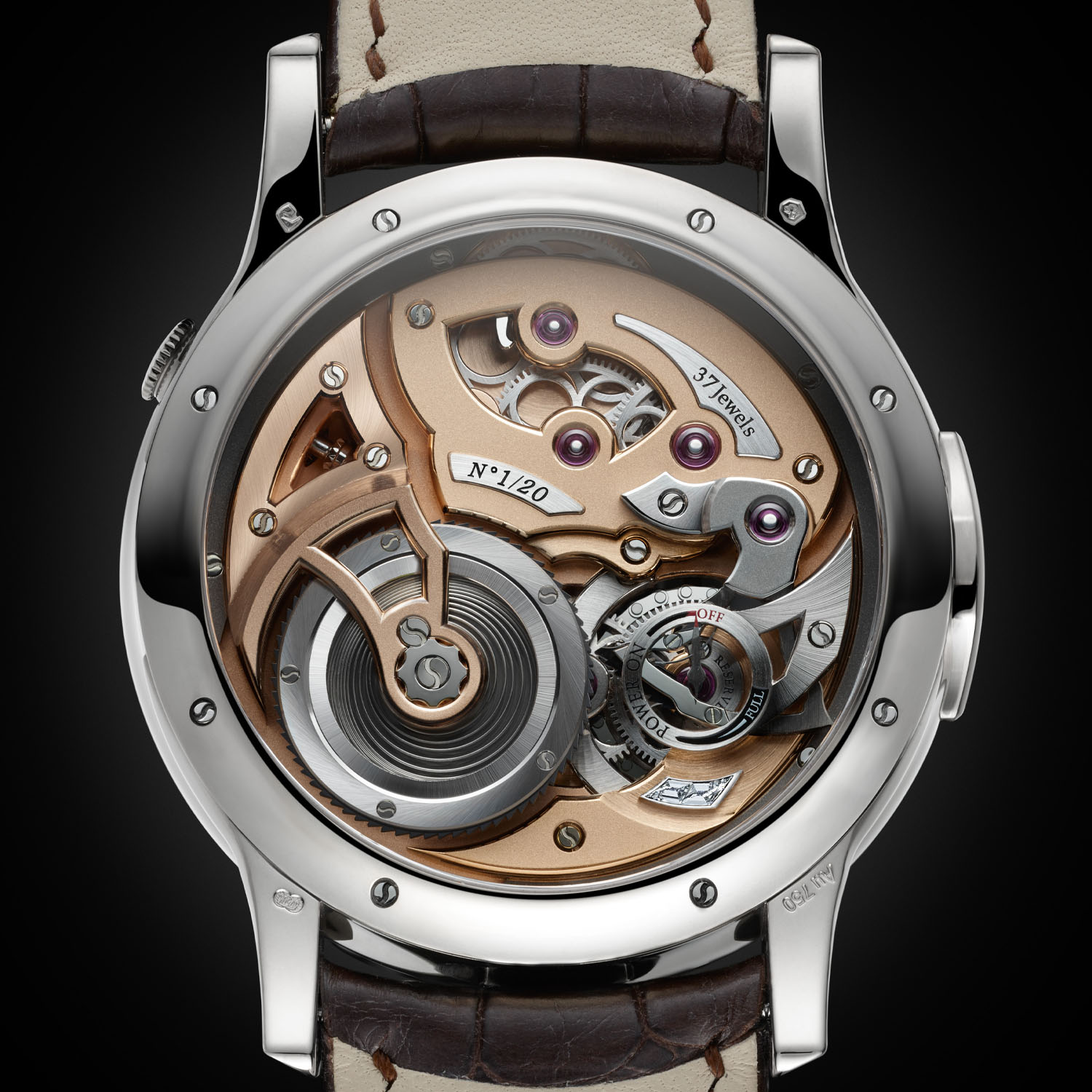 Time is indicated through an off-centre dial for the hour and minutes with an overlapping sub-dial for the seconds. It is executed in an oven-fired white enamel with blue markings and numerals. The openworked hands are done in blue as well. A black enamel dial is also available, as you can see presented here on the titanium edition. On the backside of the movement, a Baguette cut diamond and a numbered applique distinguish both from the previous Logical One editions. As always, Romain Gauthier offers bespoke options but each one is included in the run of 20 pieces for this Final Edition.

Since its conception, there have been a number of variations on the Logical One. Cases in either white or red gold, platinum or natural and blackened titanium for instance. The farewell editions presented here bring together the best of both worlds with a 43mm wide case in either white gold or titanium, both limited to 20 pieces each.

The Romain Gauthier Logical One has always been a fascinating piece of watchmaking, and a highly desirable and thus collectable one at that. We are sad to see it go but it gets a well-deserved final send-off as we await Romain Gauthier’s future projects. The Final Edition for the Logical One is priced at CHF 134,000 in titanium and CHF 148,000 in white gold. Only a couple of these editions will be delivered this year, the rest of the 40 pieces will be manufactured in 2022 and 2023.