Following updates in several collections in recent years, with revamped Carrera and Monaco lines, TAG Heuer is ready to present its updated Aquaracer 300 collection. More refined yet still very recognisable, the new range has been fully revamped without losing its DNA. Taking a look at its origins, which can be traced back to the 2000-series from the early 1980s, we go hands-on with the new TAG Heuer Aquaracer Professional 300 Calibre 5 Automatic collection.

The TAG Heuer Aquaracer 300 collection can trace its roots back to the ref. 844 of 1978 (more on that in another article, with something cool to come) and the Heuer 2000, introduced in 1982. This versatile dive watch, when the company was still just “Heuer”, was the successor to the 1000 series. The Heuer 2000 collection was available in quartz and automatic versions and proved immensely popular, spawning all sorts of varieties. Models ranged from simple, three-handed quartz watches to a chronometer version and everything in between.

Comparing the shape of the case, you can see where the Aquaracer 300 series comes from. While the Heuer 2000 series was offered as both a dive watch and a chronograph, the current Aquaracer only comes as a diver. There have been four generations of (TAG) Heuer 2000, and the model was discontinued in 2005.

The Aquaracer identification was introduced in 2004, with the TAG Heuer 2000 Aquaracer, a 300-metre dive watch, albeit a quartz-powered one. Following the decision to rebrand the entire TAG Heuer product range by LVMH, the success of the 2000 Aquaracer led to the entire 2000 series being renamed Aquaracer from 2005 onwards. While the heritage is visible for the keen eye, the Aquaracer does have its own identity, with trademark design elements trickling down to this year’s new release. Following its “Six Features” philosophy, the Aquaracer (and 2000-series ancestor) is the only model that remained true – from its inception down to the latest model – to these fundamental features:

Harking back to the first watch by TAG Heuer to bear the Aquaracer name, the 2021 collection adopts key design elements from its 2004 predecessor. The new watches have a more refined appeal overall while still being a true Aquaracer. TAG Heuer hasn’t opted to completely overhaul it but instead take inspiration from previous models and refreshes it into a very attractive, no doubt versatile watch. There’s a reason TAG Heuer markets it as a go-anywhere watch.

Although the new TAG Heuer Aquaracer comes in two different case sizes, we focus on the larger size. The 43mm wide steel cases (the smaller being 36mm) retain the Aquaracer look, which has been refined and updated to modern standards. The steel case and bracelet models come in three different colours: blue, black and silver dials, all with a sunray-brushed finish. The blue and black dials are matched with a blue or black ceramic bezel insert, but the silver dial receives a healthy dose of contrast with a black insert. The bezel is still the 12-sided shape the Aquaracer is known for, yet more refined. No longer featuring the claws on top, it now has a fluted edge for a better grip and a more discreet look.

The steel case for the new Aquaracer has been enhanced with brushed finishing on the top and sides of the case, alternated with polished chamfers. The edge for the bezel is also polished to set it off against the case. The dial for each new Aquaracer has been updated too, yet still has the horizontal pattern on the dial that is a trademark for the collection. While previously using faceted rectangular hour markers, TAG Heuer has changed them to octagonal applied markers filled with Super-LumiNova. The shape is reminiscent of the hour markers on the 2004 TAG Heuer 2000 Aquaracer, albeit those were actually round. 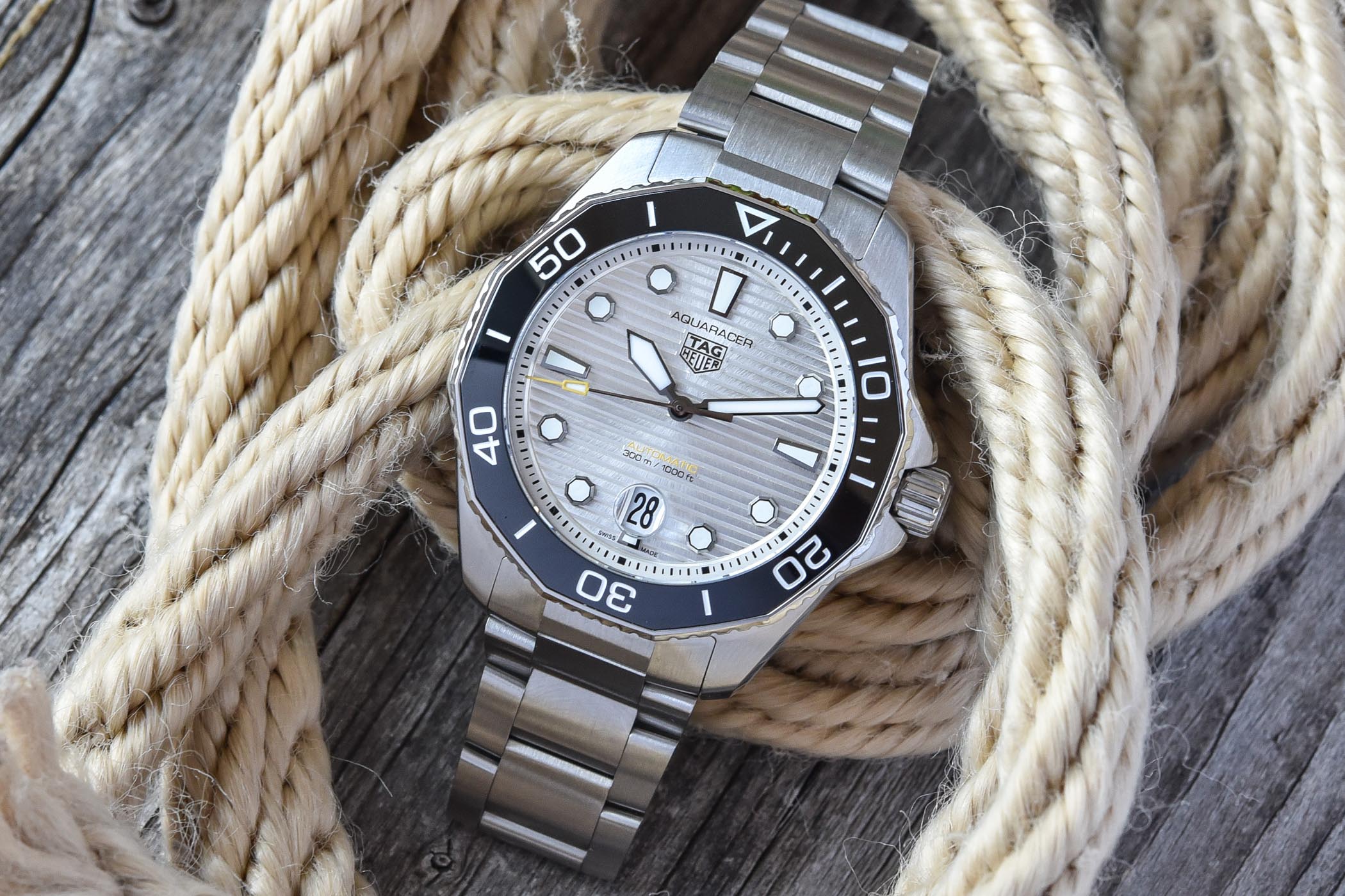 The sword-shaped hands have been redesigned and now feature a single luminous insert instead of the previous segmented ones. Furthermore, the date window has been placed at 6 o’clock, and the cyclops has been moved to the underside of the crystal instead of on top for a smooth look and feel. The last element that is noteworthy is the finely reshaped crown guards, more in line with the overall refined case. 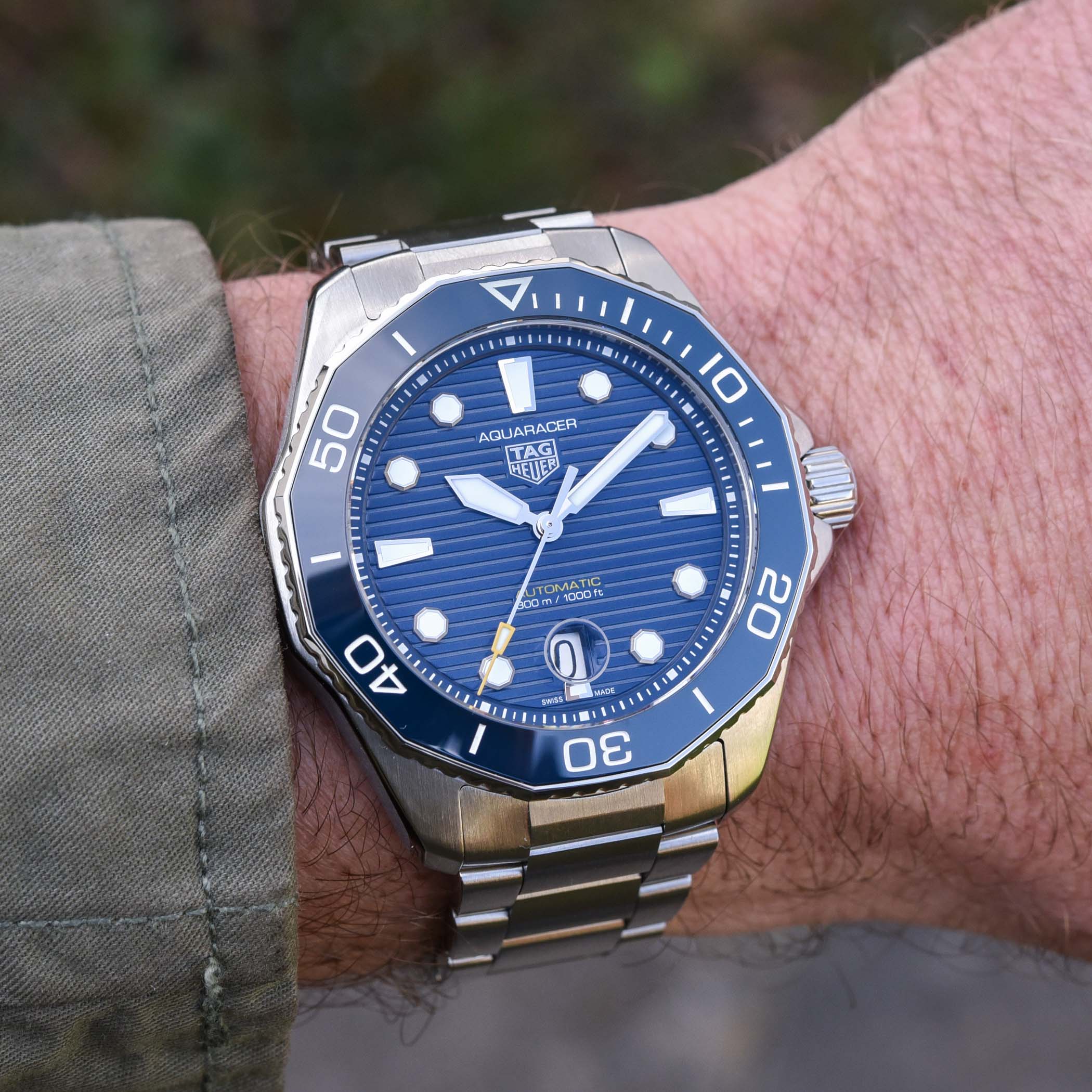 Next to three full steel models, there’s also a full titanium special edition. The sandblasted matte titanium case comes with a green sunray-brushed dial and a radial-brushed ceramic bezel insert. The lightweight material gives the Aquaracer an even more tool-watch look. It’s not entirely new for the Aquaracer series: titanium was first used in the second generation of the model, which ran from 2009 to 2012. The then top-of-the-range Aquaracer 500m Full Black had a bold 500m water-resistant titanium case in black, later accompanied by a chronograph version. And this matte finish was part of the recent Aquaracer Bamford Limited Edition. 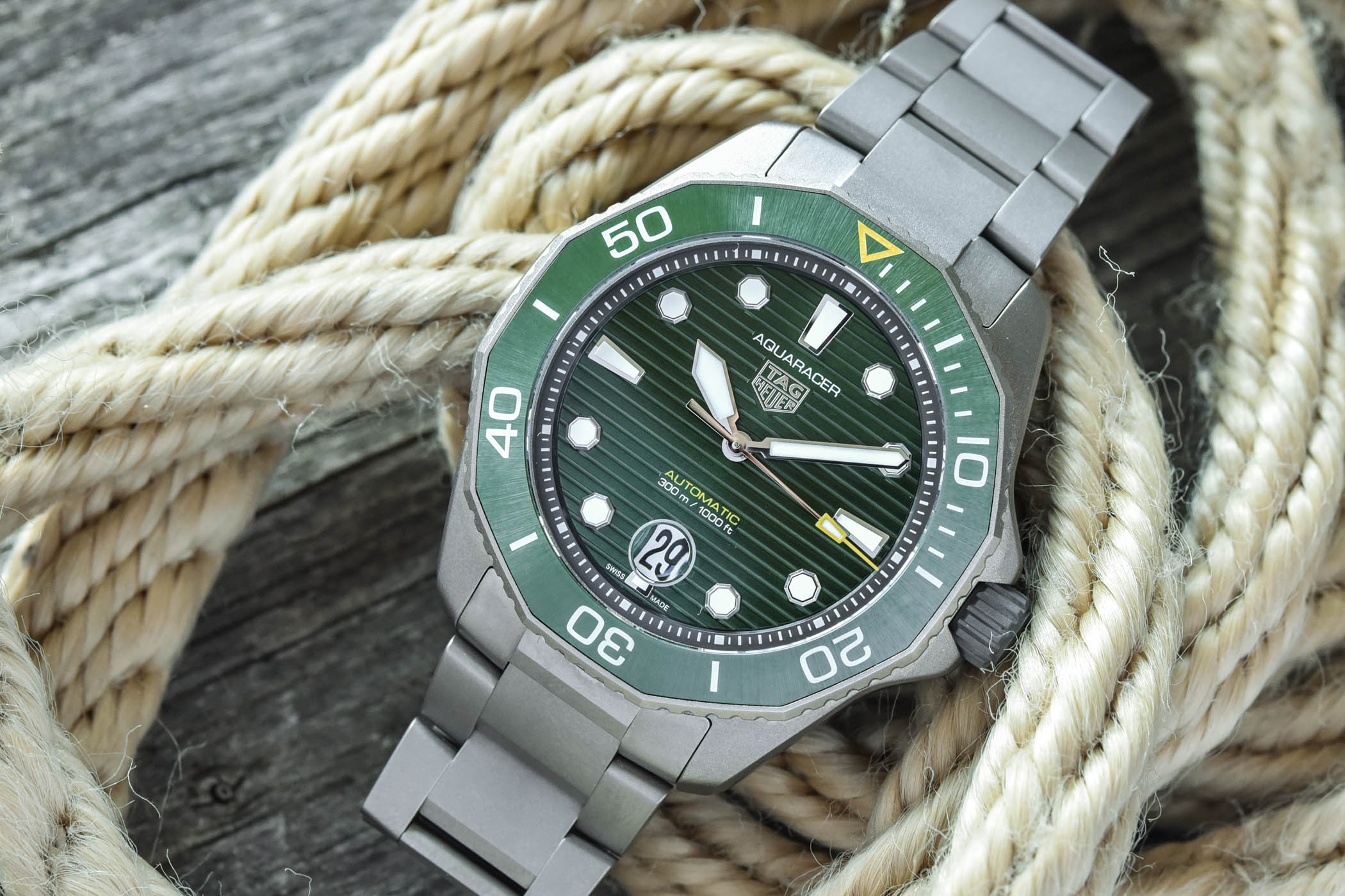 All the updates incorporated in the steel models have, of course, been transferred to this titanium one, except for the polished chamfers on the case, bezel and bracelet. To distinguish it even further, the bezel insert has a contrasting orange triangle top marker and orange inscriptions on the dial. The spacing between the engraved horizontal lines is a bit wider than previous Aquaracer models, which is a subtle touch barely noticeable at first. The combination of the non-glaring titanium and the green dial and bezel is striking and gives the watch a distinct look.

What hasn’t changed in the new range of TAG Heuer Aquaracer watches, for both the 43mm and 36mm versions, is the movement. The calibre 5 automatic movement has been used in the Aquaracer for ages and is still a practical, reliable choice. It indicates hours, minutes and seconds and also includes a date indication positioned at 6 o’clock. 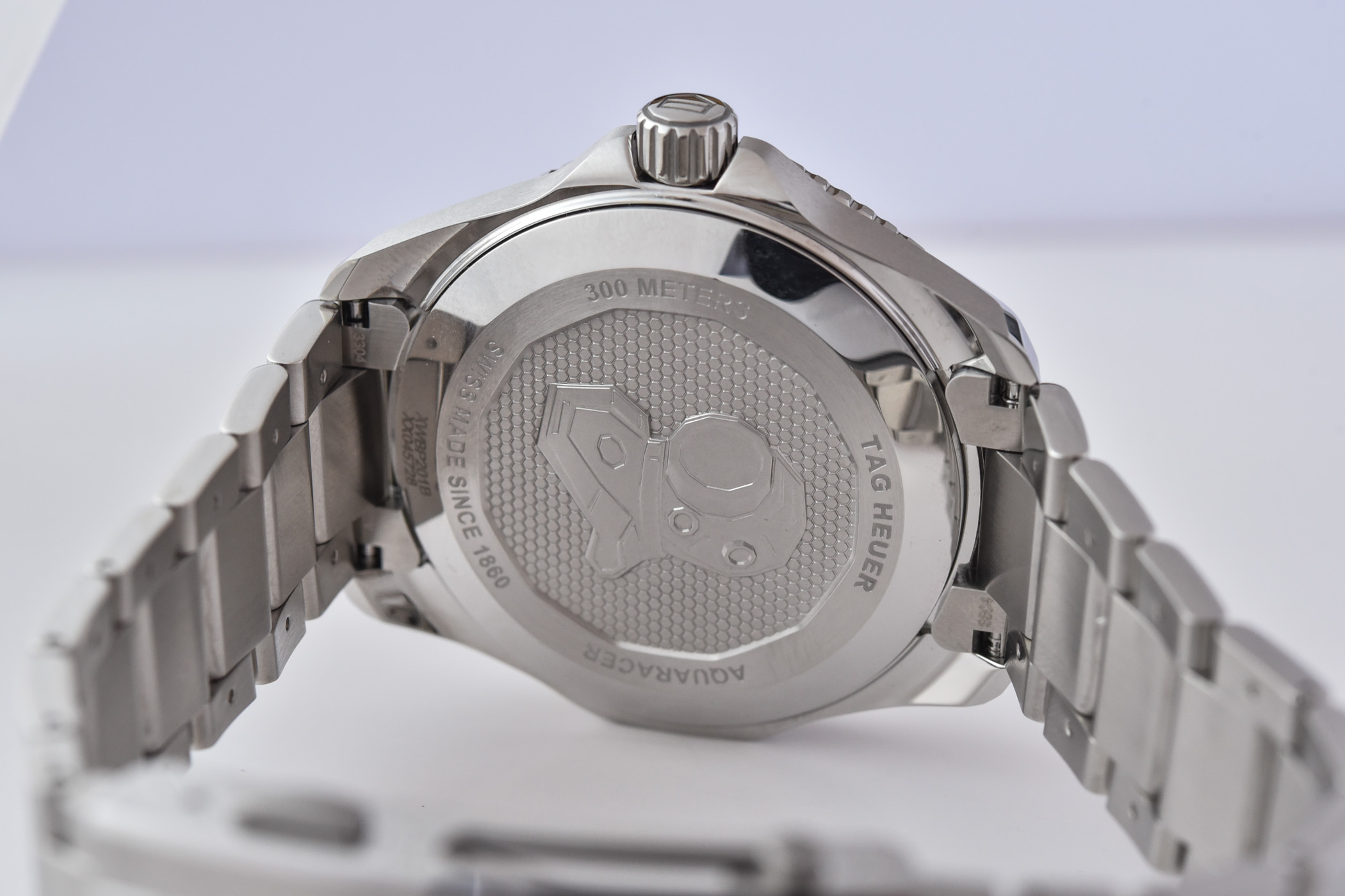 The calibre 5 movement is hidden under a newly styled enclosed caseback with a diving helmet and a honeycomb motif. Based on a Sellita SW 200-1 architecture, the Calibre 5 has 36 jewels and runs at a frequency of 4Hz or 28,800vph. The power reserve is 38 hours, and the water-resistance is rated at 300 metres.

For both the steel and titanium Aquaracer, a matching bracelet comes as standard. Each reference features a newly designed integrated bracelet with a folding clasp that includes a fine adjustment – increasing the size by 1.5cm.

The new TAG Heuer Aquaracer Professional 300 Automatic Collection will be available from June 2021. Prices start at EUR 2,850 for the three steel models. The titanium version is priced at EUR 4,000.