Launched in 2014, the Omega Seamaster 300 – not to be confused with the James Bond, more modern Seamaster Diver 300M – has since been the brand’s vintage evocation of the original 1957 Seamaster 300. Still, its previous iteration, how performing and well manufactured it was, as maybe a bit too technical and sporty. Well, Omega has apparently understood that and, for 2021, comes with an entirely revamped model. If the basics are still here, meaning a look inspired by the 1957 reference CK2913, the case, the dial, the movement, most details are new. And there’s even an unprecedented bronze-gold version coming, in a one-of-a-kind alloy. Let’s have a first look, in the metal, at this 2021 Omega Seamaster 300 Collection. 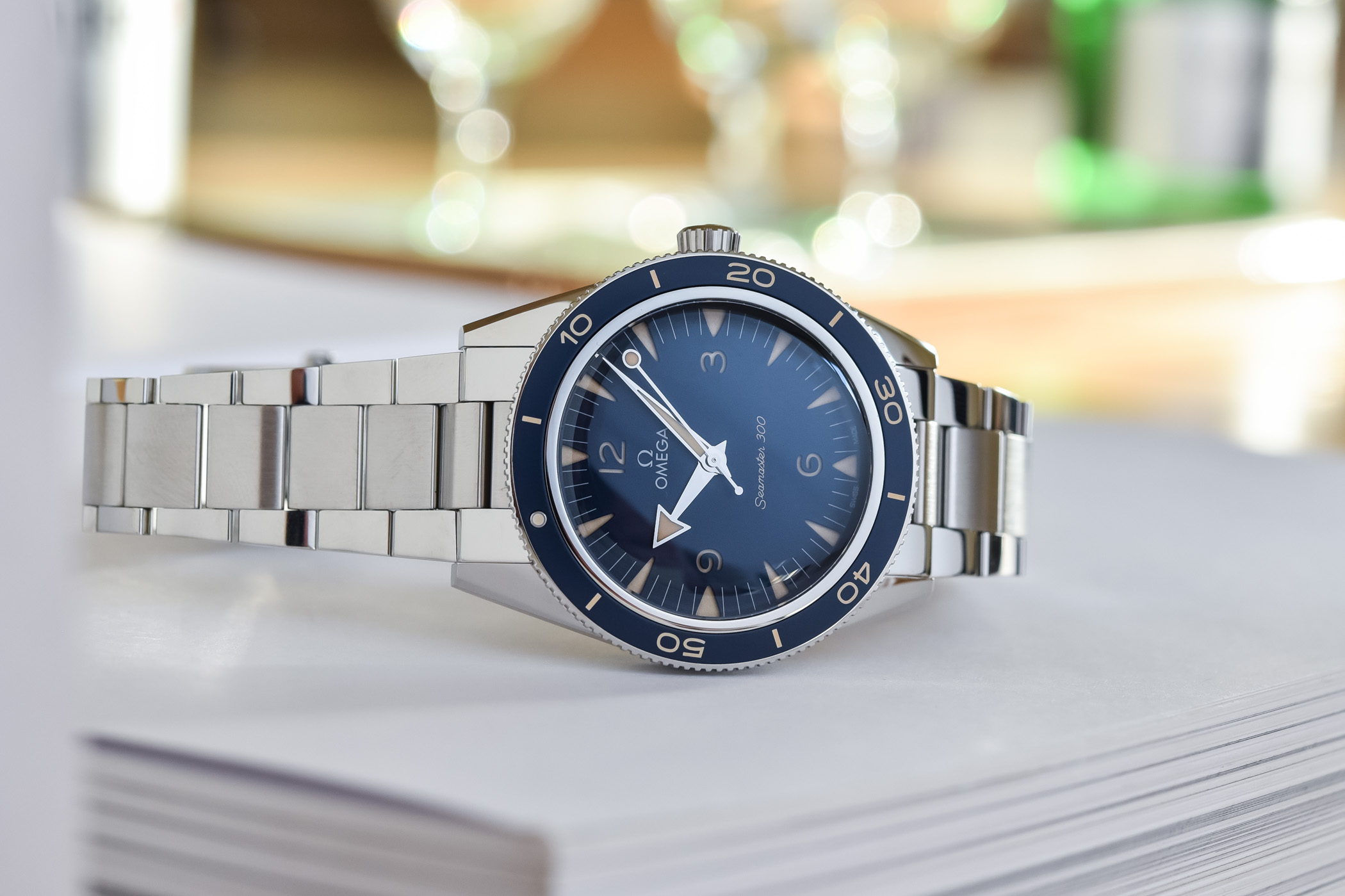 Introduced in 1957 alongside the first Speedmaster and the Railmaster – thus creating the iconic Professional trilogy – the Seamaster 300 represents one of the brand’s most important and most influential watches. Its design, with its typical 2-part bezel – combining a polished metal ring and a black insert with 60-minute scale – its broad arrow hands or its angular case, have been a source of inspiration for multiple models in the Omega’s history. The pinnacle of this retro-inspiration came in 2014, with the Seamaster 300 that we’ve extensively reviewed here. There was no doubt on the quality of the watch or its impressive movement. Yet, the styling was a bit too modern, too sporty, too technical for a watch that was supposed to evocate the past. This year, Omega launches a new collection that will be thinner, equipped with a new movement (METAS-approved, of course) and with plenty of vintage charm to clearly differentiate this watch from the modern Diver 300M.

Before starting with the details, it’s important to mention that, in addition to the steel versions, Omega is adding a third iteration made from an unprecedented alloy, which shows multiple differences with the rest of the collection. This one will need its own section. But first, the two steel models. The basics of the Omega Seamaster 300 collection have been kept, with a case that measures 41mm in diameter but is thinner than before, at now 13,85mm (vs. just under 15mm in the past edition). The case still shows the same angular design, with symmetrical casebands, no crown guards and flat surfaces top and sides. The lugs are adorned by a nice polished bevel on the side too, but nothing new here. The flat surfaces are polished while the casebands are brushed. Finally, there’s a new conical screw-in crown and water-resistance, as you’d expect from the name, is still rated at 300 metres. There’s a new, far more domed sapphire crystal too over the dial, once again enhancing the retro look of the watch. 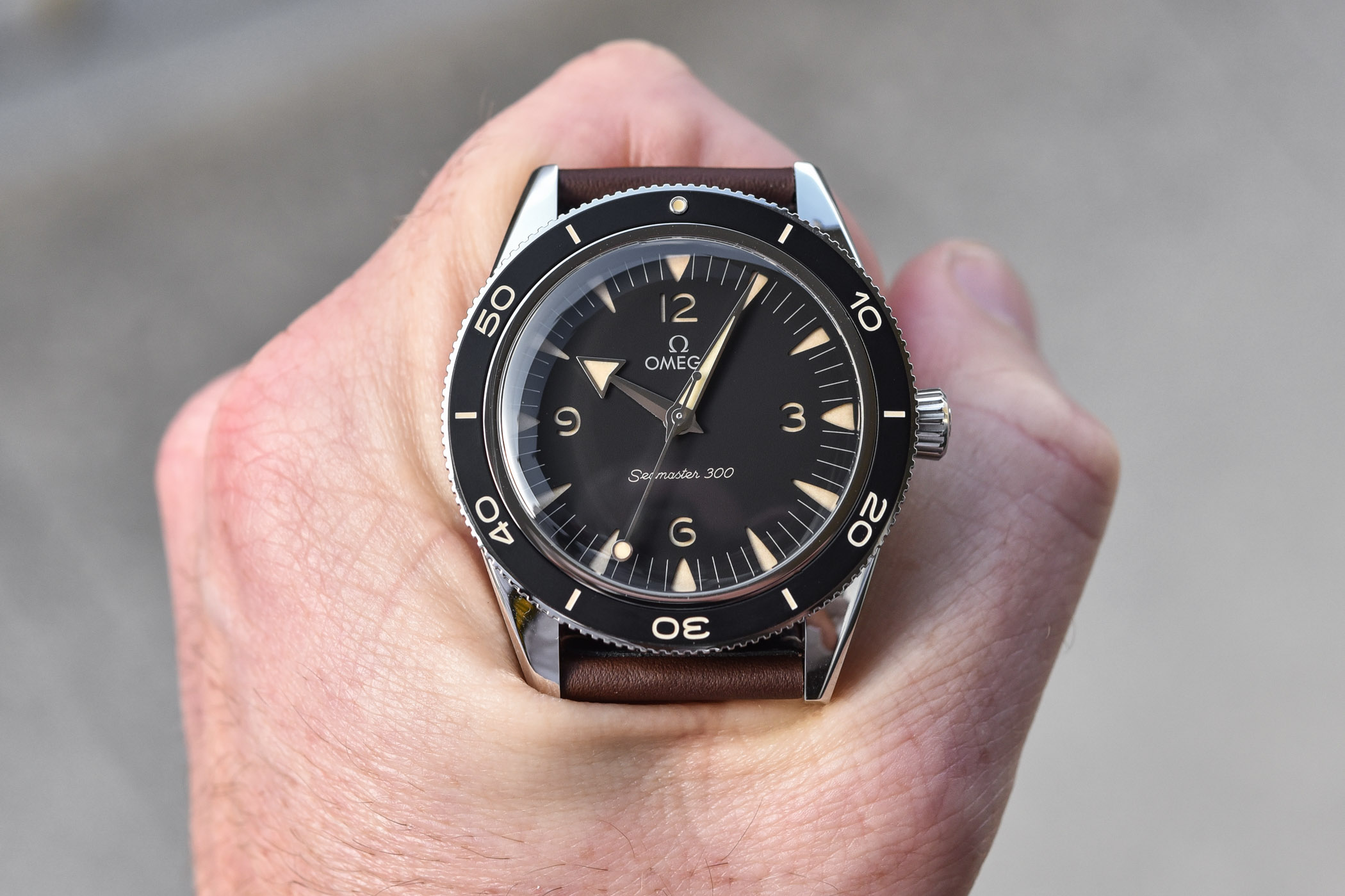 Some evolutions are to be noted on the bezel and its proportions too. First of all, the dial opening has been increased from 29.5mm to 30.4mm now, and the bezel is thinner than in the past version. This makes the watch more aerial and visually less bulky. Also, if the bezel still shows its distinctive coin-edge profile and 2-part design, the insert of these two steel editions is not ceramic anymore, but matte oxalic anodized aluminium (for improved resistance), with a cleaner, less shiny and more vintagey look. The 60-minute scale is super-clean too, with minimal graduations and a luminous dot.

For this new Omega Seamaster 300 Collection, the brand has also worked on the dial, with the same idea of retro styling and sleeker design. As such, the brand has opted for a so-called sandwich dial made from two layers. The lower one is coated with vintage-coloured Super-LumiNova, while the upper one features cuttings for the recessed hour markers and numerals, thus revealing the lume underneath. In a nod to history, these numerals are in the vintage Arabic open style, which appeared on early Seamaster 300 models in the 1960s. The base of the dial, available in warm black or blue (and matching the bezel’s insert), is matte and slightly grained. 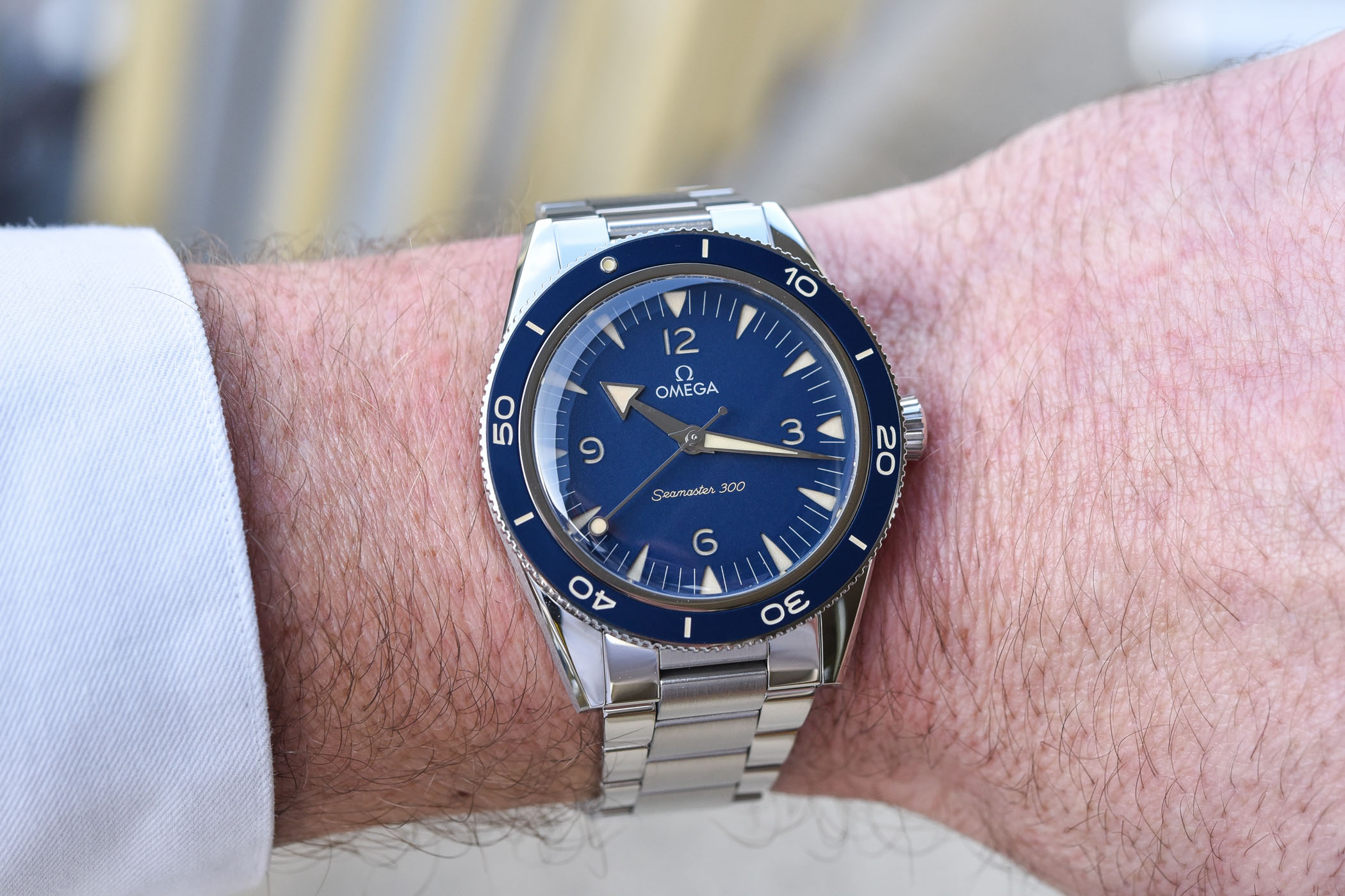 The hands of this new Omega Seamaster 300 have also been reworked. The hour hand (with blue emission) still has its faceted arrow style, while the minute hand (with green emission) is a sword shape. The real news here is the lollipop seconds hand, with its tip filled with Super-LumiNova. Overall, the dial is cleaner, with only minimal literature – logo, brand name and model name – and no longer any references to the movement’s technology. Well done. 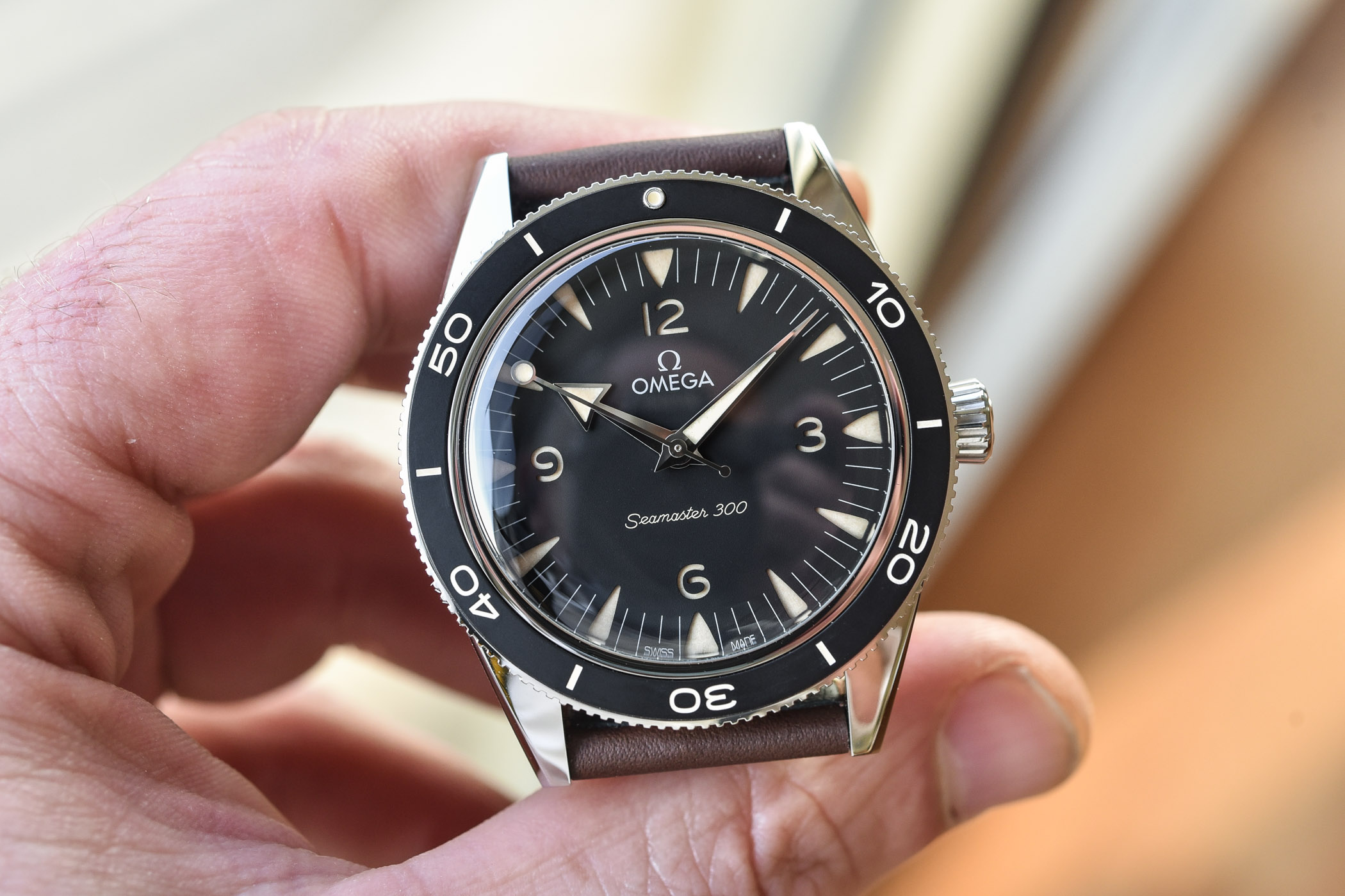 The strap or bracelet options are also new to this new Omega Seamaster 300. First is a thin, retro-looking leather strap closed by a steel pin buckle. The steel bracelet has been reworked, with now external polished links and brushed central link (reversed compared to the previous edition), and its shape has been ergonomically adjusted with streamlined fittings and a thinner, polished-brushed clasp with fine adjustment.

Under the hood, it’s all about modernity though. The brand is fitting here its Co-Axial Master Chronometer Calibre 8912, replacing the older Calibre 8400. If the architecture is basically the same, this new movement is now Master Chronometer-certified by METAS. This powerful and large automatic movement has a twin-barrel architecture with a 60h power reserve, a 3.5Hz frequency for its silicon escapement with co-axial technology and is, in addition to its certified precision, resistant to magnetic fields up to 15,000-gauss. It is visible under a sapphire caseback with wave-edged design. The decoration is classic Omega. 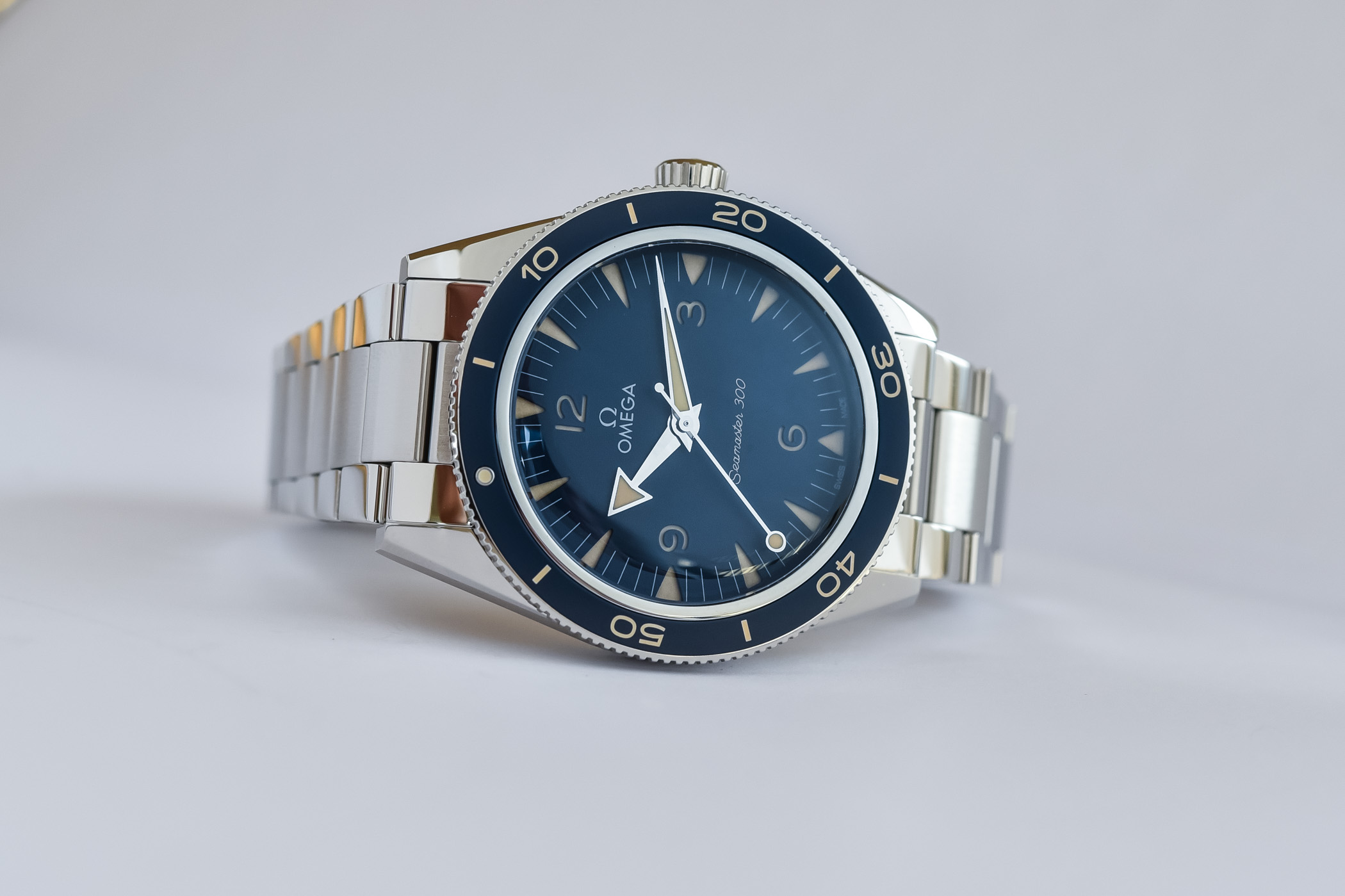 The other real noticeable thing with this new Omega Seamaster 300 collection is the introduction of a third iteration, which is slightly different in design and finish from the rest of the steel models, but also has something special, its material. 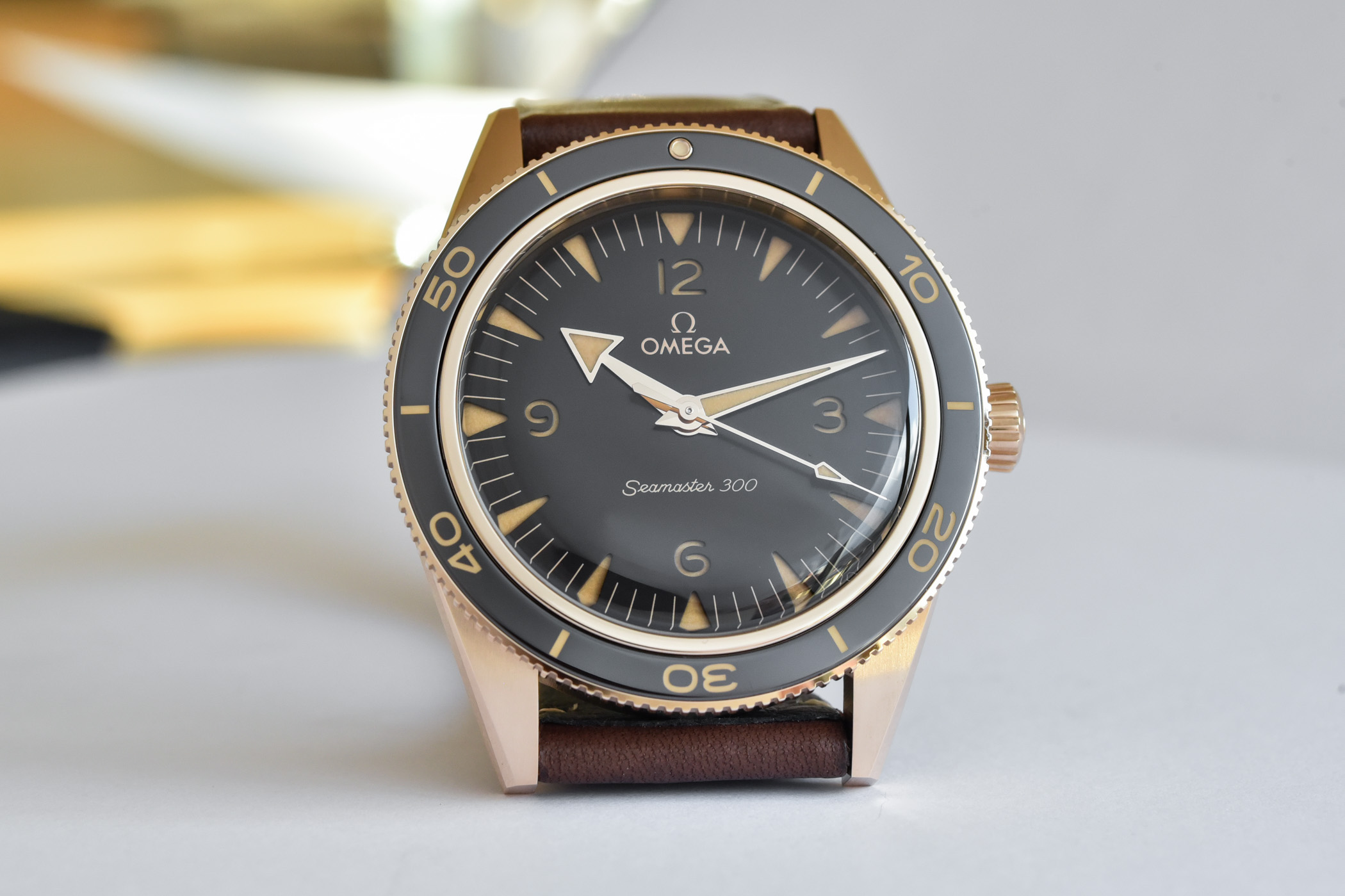 Indeed, Omega is bringing here a new patent-pending material named “Bronze Gold” said by Omega to be “specifically developed to produce a pleasing aesthetic and hue, while also offering a bronze alloy that could be worn with direct contact on the skin, thanks to its distinctive composition.” Used for both the case and buckle, the one-of-a-kind alloy is enriched with noble elements such as 37.5% gold, hallmarked as 9K, as well as palladium and silver, to create a unique colour that sits exactly between Moonshine gold and Sedna gold. Also, being more corrosion-resistant than traditional bronze alloy, it won’t get verdigris-oxidation and thus will age slowly and retain its natural and beautiful patina over a longer period of time. 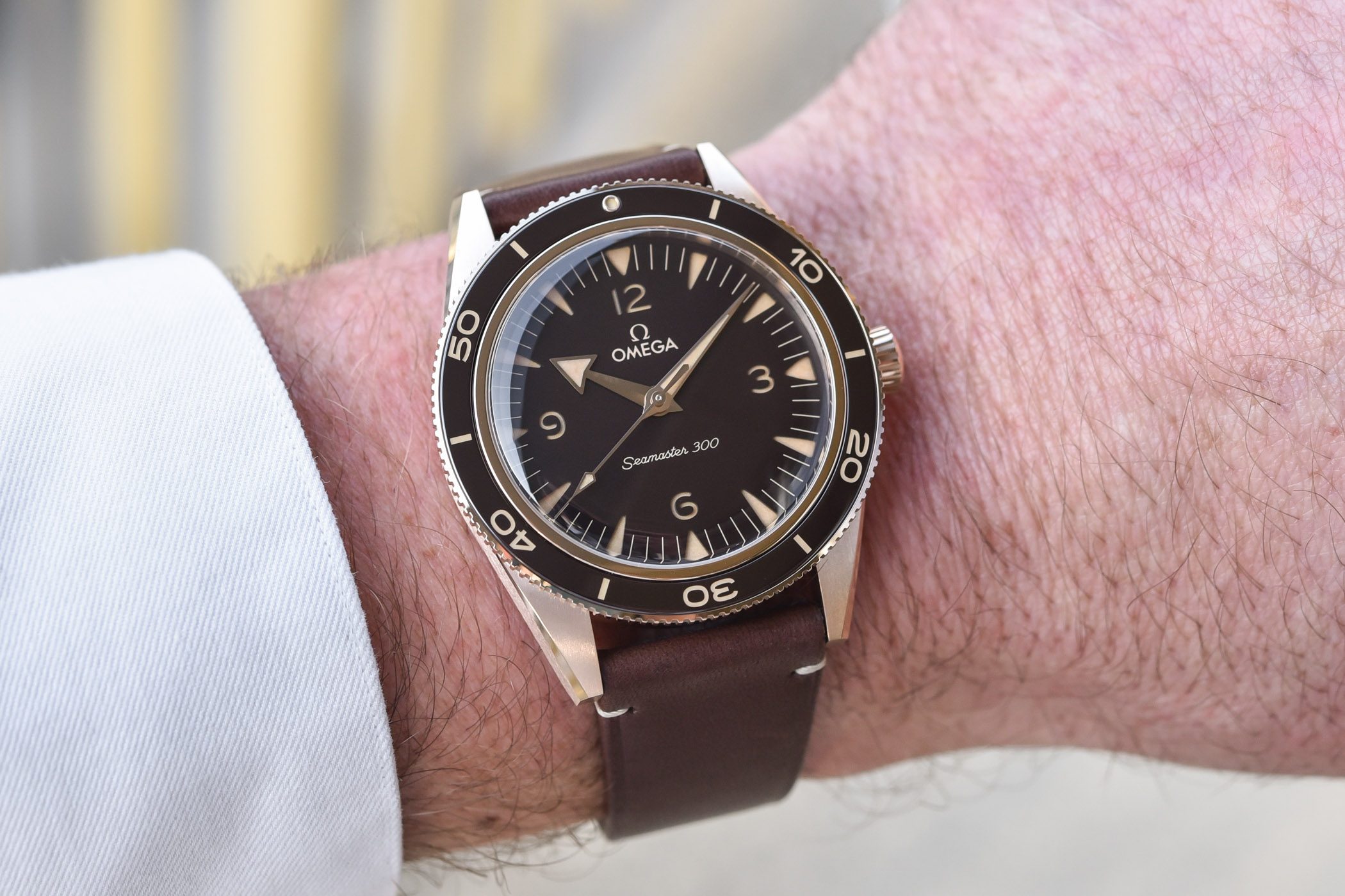 If the watch retains most of the elements explained above, such as the 41mm diameter and shape of the case, it has to be noticed some differences; such as more brushed surfaces around the case, a bezel’s insert here made of dark brown and glossy ceramic, and a dial that is made from solid bronze, in a dark brown colour with a patina that was created after a special aging process had taken place. The sandwich architecture and the hands’ design (even though bronze-coloured) have been retained, except for the seconds hand with diamond-shaped luminous tip. 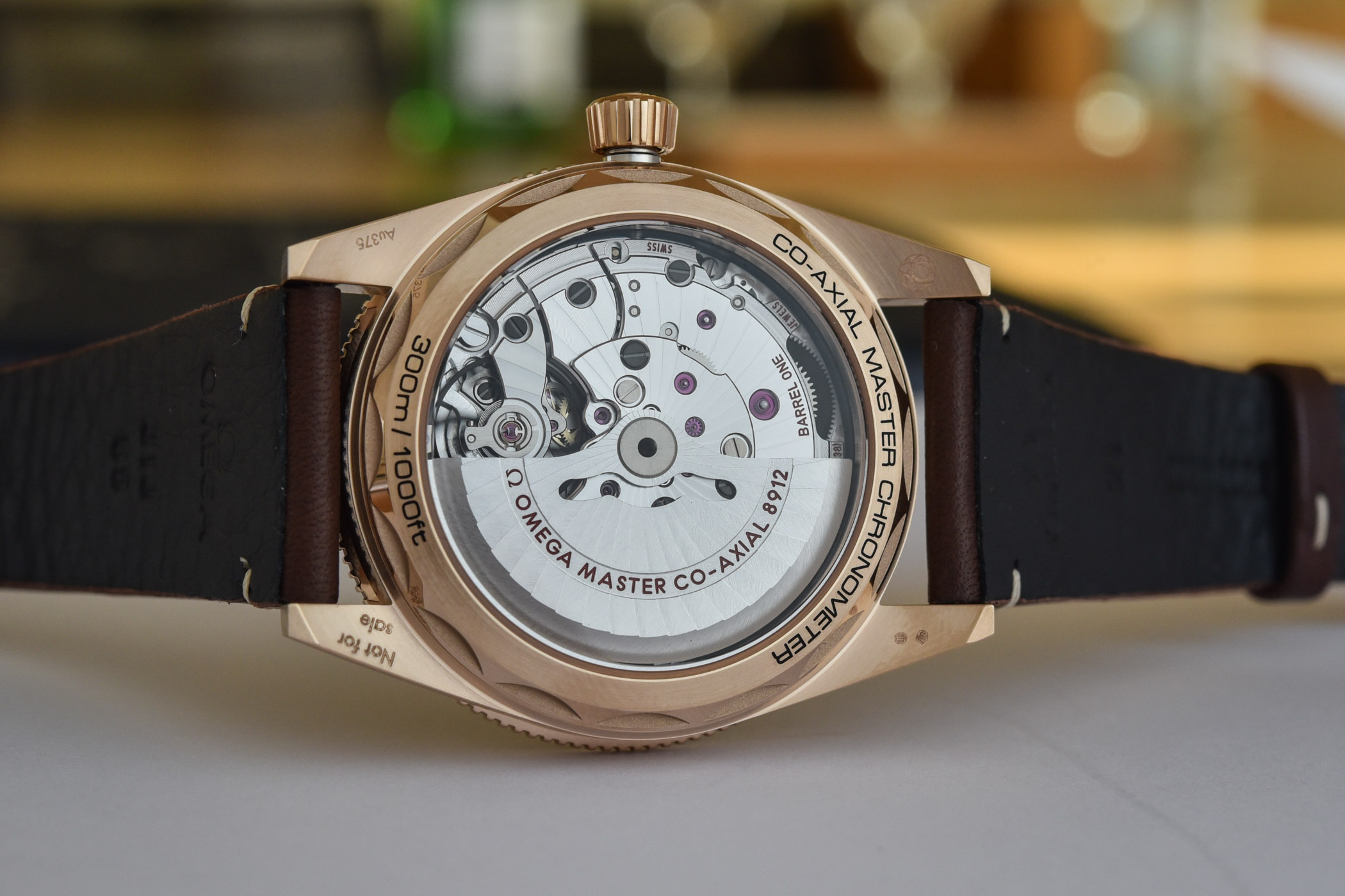