The world of dive watches is wide… so wide that we sometimes tend to forget that, during the 1960s, there were hundreds of brands and watches available. Some, of course, acquired cult status… Some felt into oblivion. Some, however, are still known and collected by a niche group of enthusiasts. We’ve seen this recently with Aquastar, for instance. Another brand that was recently revived is Nivada Grenchen. Following the launch of the Chronomaster, the brand revives another model from its past, one with a cool nickname; the Depthmaster “Pac-Man.”

Nivada was founded in 1926, the year when Jacob Schneider first created it in Granges (Grenchen). In 1930, Nivada was one of the first companies to manufacture automatic watches. This led to the creation of Nivada’s first waterproof automatic watch called the Antarctic in 1950. The watch was worn by the members of the American Navy’s Deep Freeze 1 during their expedition to the South Pole from 1955 to 1956. Among numerous models, the most widely known is the Chronomaster, a chronograph waterproof up to 200 meters. It had three distinct collections, namely: Chronomaster, Aviator, and Sea Diver. In 1964 followed another important watch, the Depthomatic, the first diver’s watch with a depth indicator or bathymeter. 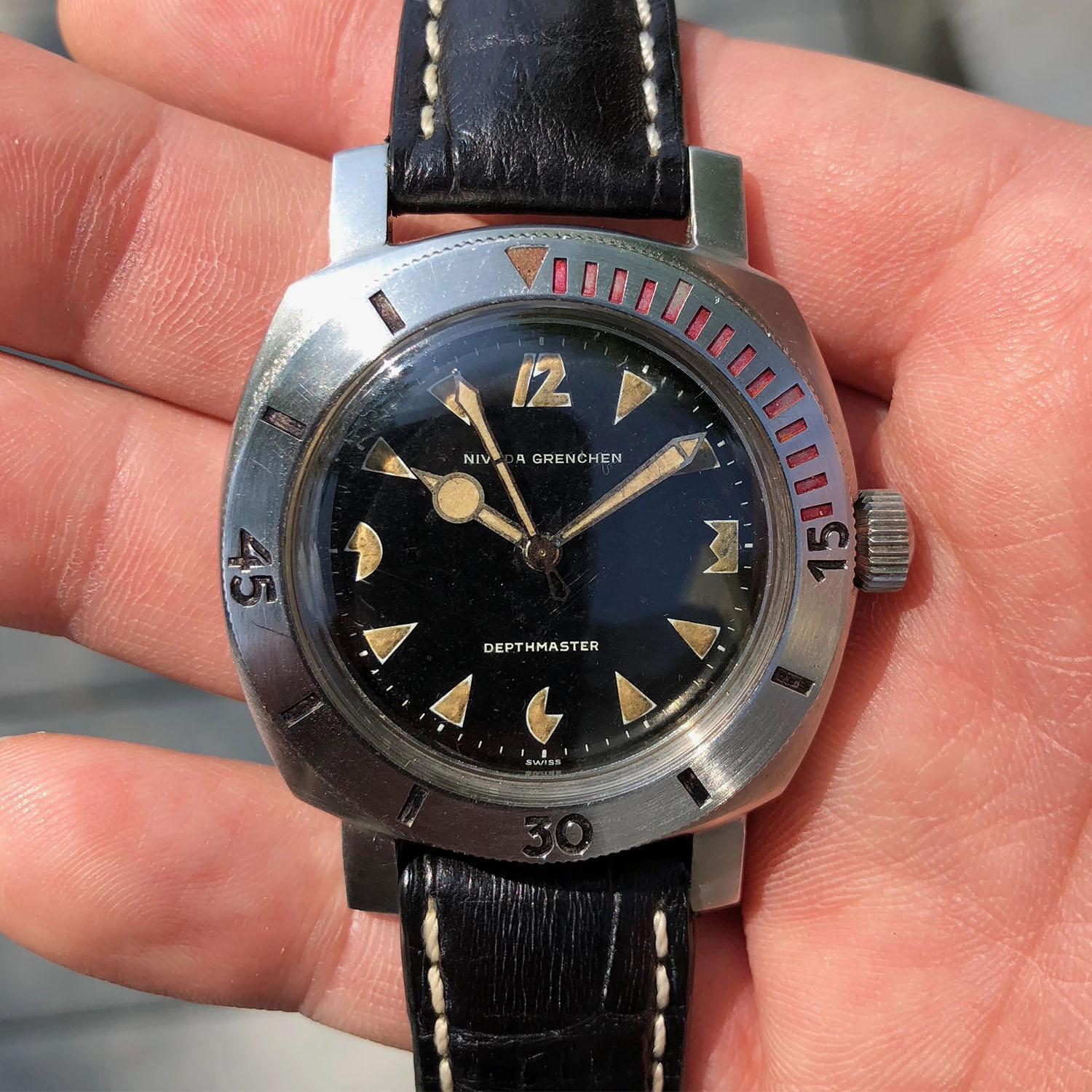 A vintage example of a Pac-Man Depthmaster – image by hashtagwatchco.com

But today is all about a quirky diving instrument… In 1965, Nivada Grenchen introduced a powerful watch, the Depthmaster, a dive watch that could withstand a pressure of 100 ATM or 1,000 meters. Not a small achievement, considering most dive watches at that time were offering 150 or 200 meters of water-resistance. In fact, this was a record for the industry, until Rolex introduced its Sea-Dweller. The Depthmaster received several nicknames. First, “baby Panerai” or “mini Panerai” due to its cushion-shaped case, however far smaller than the Florentine production. Second, the one that feels the most accurate to us, is “Pac-Man” and that has to do with the dial. If two versions were available, the one with Arabic numerals will be less “iconic” than the one we see today, with its combination of a 12 marker, triangular indexes and, surprising markers for 3, 6 and 9 o’clock… These were created to quickly identify the time in low-light conditions, but they also looked very cool.

Nivada Grenchen, like many brands in the 1970s, didn’t survive the quartz crisis. But two watch entrepreneurs decided to bring the name back. The story started in Paris in 2018 during a discussion between Guillaume Laidet, a French entrepreneur in the watch industry (former Jaeger-LeCoultre, Zenith, and founder of William L.1985), and Remi Chabrat, owner of the Montrichard Group (a private label watchmaker). The latter was in business with the Mexican group (Grupo Industrial Omega SA de CV) owning the name Nivada and in 2019, they obtained the license to use the Nivada Grenchen copyright. The adventure has started with the successful relaunch of the Chronomaster and the Antarctic.

Following these two collections, the brand is now reviving another important model, the brand’s most emblematic diver’s watch, the Depthmaster – in two variations, inspired by the past, meaning the so-called Pac-Man and the one with Arabic numerals. 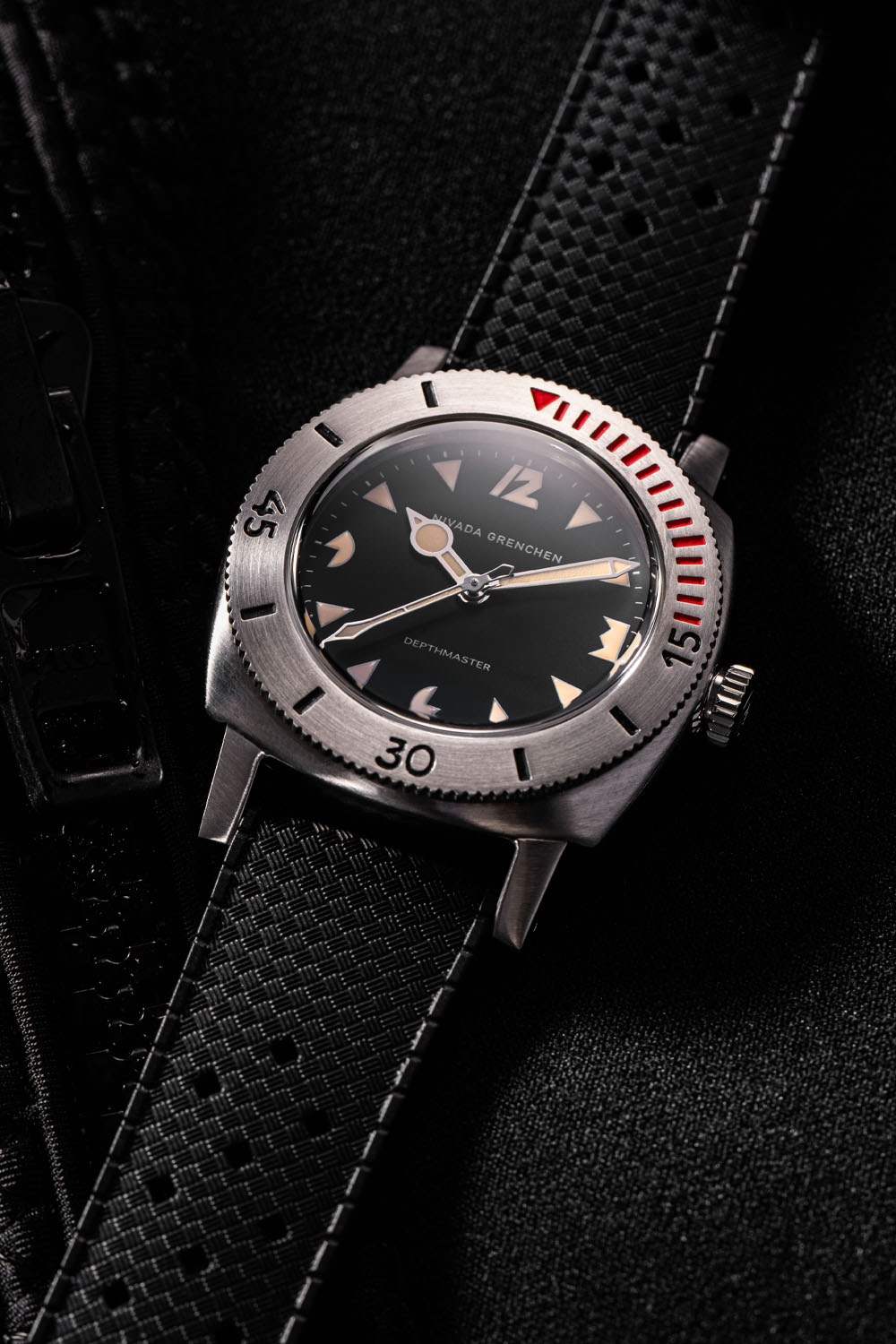 Just like the Chronomaster, the idea with this Nivada Grenchen Depthmaster was to create a faithful and accessible re-edition of the past model, visually as close as possible, yet with modern execution. As such, the design of the new Depthmaster remains almost identical, with a stainless steel cushion-shaped case, straight lugs and a brushed steel diving bezel. The case retains the same combination of brushed and polished surfaces as the original, and proportions are also restrained with a 39mm diameter (vs. 38mm in the past), a 13mm height and a 47mm lug-to-lug measurement. And because the original one was a powerful diving instrument, the Nivada Grenchen Depthmaster respects its spirit with a 1,000m water-resistance, a screw-down crown and caseback and a Helium escape valve at 9 o’clock.

Some elements have been updated, though. For instance, the plexiglas has been replaced by a modern sapphire crystal. Yet, the unidirectional bezel, engraved with a 60-minute scale, retains its engravings and the combination of red and black. Inside the case is a tried-and-tested movement, an automatic Sellita SW 200-1 no-date, with 4Hz frequency and 38h power reserve.

The most notable element of the watch was its dial. While there will also be an edition with Arabic numerals, the brand has yet to release visuals. For the time being, we have the very attractive and distinctive so-called “Pac-Man” model, which brings back the quirky combination of triangular indexes, a 12 Arabic numeral and shaped markers at 3, 6, and 9 o’clock to distinguish the hours of the day. These are painted on the dial with Super-LumiNova and combined with bold luminous hands, in polished metal. Note that the watch will be available with white or cream-coloured luminous paint – whether you prefer a technical or vintage look. Below, the edition with white Super-LumiNova and a red seconds hand.

The watch will be available for pre-order as of February 2021 at nivadagrenchenofficial.com. Deliveries are expected in June 2021. It will be priced at EUR 850 or USD 1,000 on leather or tropic strap, and EUR 1,050 or USD 1,275 on steel bracelets.