The Speedmaster has long been associated with Space exploration, specifically since 1969 when the watch made it to the surface of the Moon, after NASA qualified it for all manned space missions. Yet, the Moonwatch, also known as the classic Speedmaster Profesional with its hand-wound mechanical movement, isn’t the only watch produced by Omega to have been in Space. Indeed, ESA (the European Space Agency) has long been involved with the Biel-based brand in the development of an advanced tool for its pilots and crewmembers, the so-called Skywalker or X-33. Still partnering with ESA, here’s the watch that is ready for the next giant leap, the watch designed to measure every moment on planet Earth, and Mars! Meet the Omega Speedmaster X-33 Marstimer. 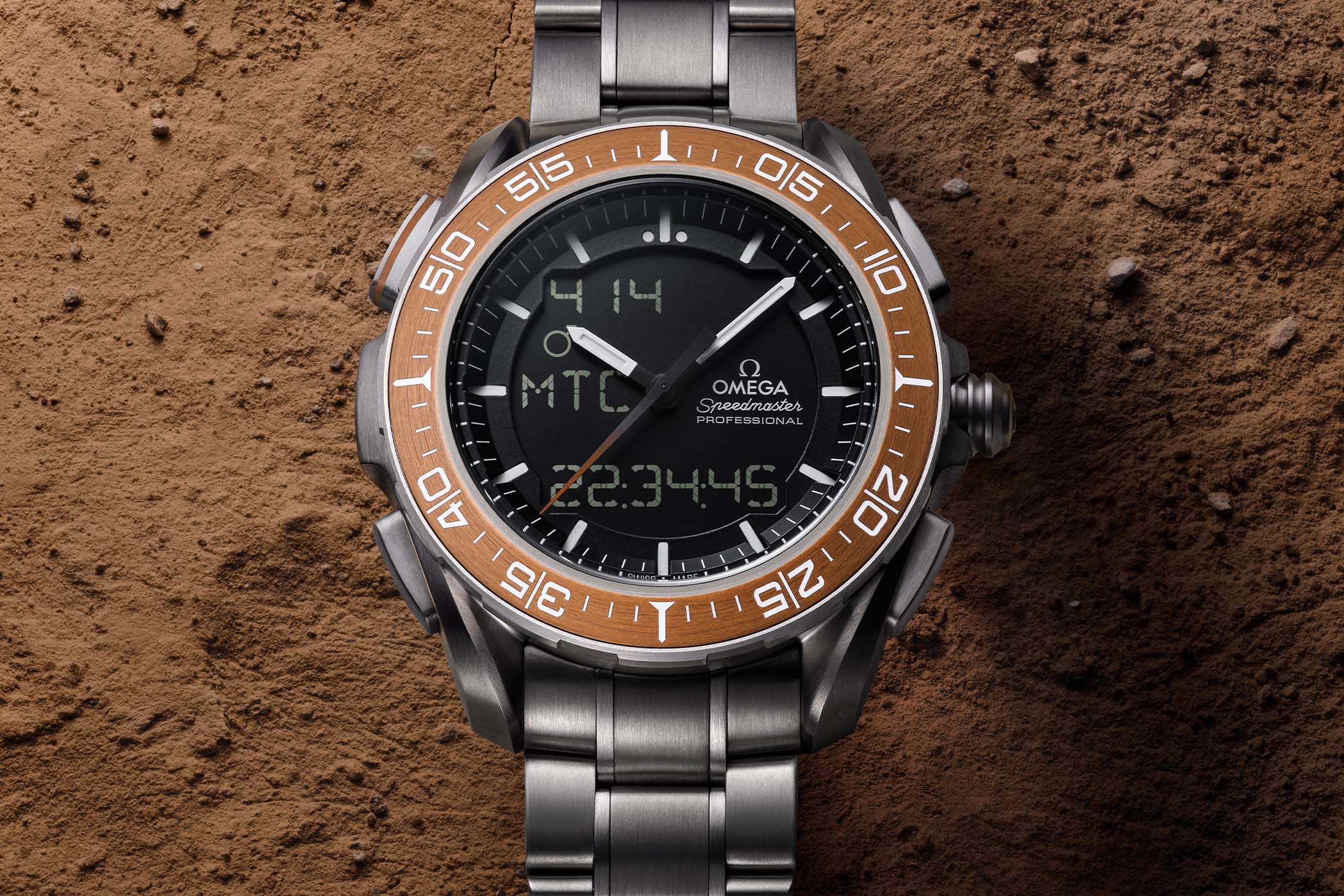 Quick recap about the Speedmaster X-33

If the original Speedmaster Moonwatch surely is the most famous of all space-related watches, it’s also somehow a bit outdated regarding its specifications – at least when it comes to true operation use. The classic mechanical chronograph has tremendous charm, but not so much practicality or functionality onboard. Hence the development of a new generation of watches meant to be worn by astronauts.

The Speedmaster X-33 – which we have extensively explained in this in-depth article (a must-read in the present case…) – was developed under the guidance of General Tom Stafford, former NASA Apollo X astronaut, as a tool for NASA pilots. Launched in 1998, it was a multi-function analogue/digital quartz-powered watch designed in coordination with NASA astronauts, Russian cosmonauts and some professional ex-military pilots. Made entirely of titanium, it took some of the classic Speedy design elements to a new, more robust and more modern level. Functions include a chronograph (on multiple days), calendar, multiple time zones, an alarm and a rotating bezel for calculations. It was discontinued in 2006, yet remained in service for NASA missions.

In 2014, Omega presented the Speedmaster Skywalker X-33, which was then developed together with the European Space Agency (ESA). Made of titanium (a combination of grade 2 and 5), modernized in design and functionalities, it is once again a proper tool for professional pilots that is “Tested and certified by ESA” as written on its caseback. And yet, it’s available to the public. This 45mm watch is a strong upgrade over the previous generation and now packs a large LCD screen, with functions such as time zones, alarm, chronograph, countdown, calendar and astronaut-specific displays; mission elapsed time (MET) and phase elapsed time (PET).

Following the tradition of working with space agencies all around the world, Omega and the European Space Agency have now unveiled their latest creation, intended to be ready for the future of manned missions. And this represents the 4th generation of Speedmaster X-33, following the Skywalker. And if it basically retains most of its specifications, some updates have been made. 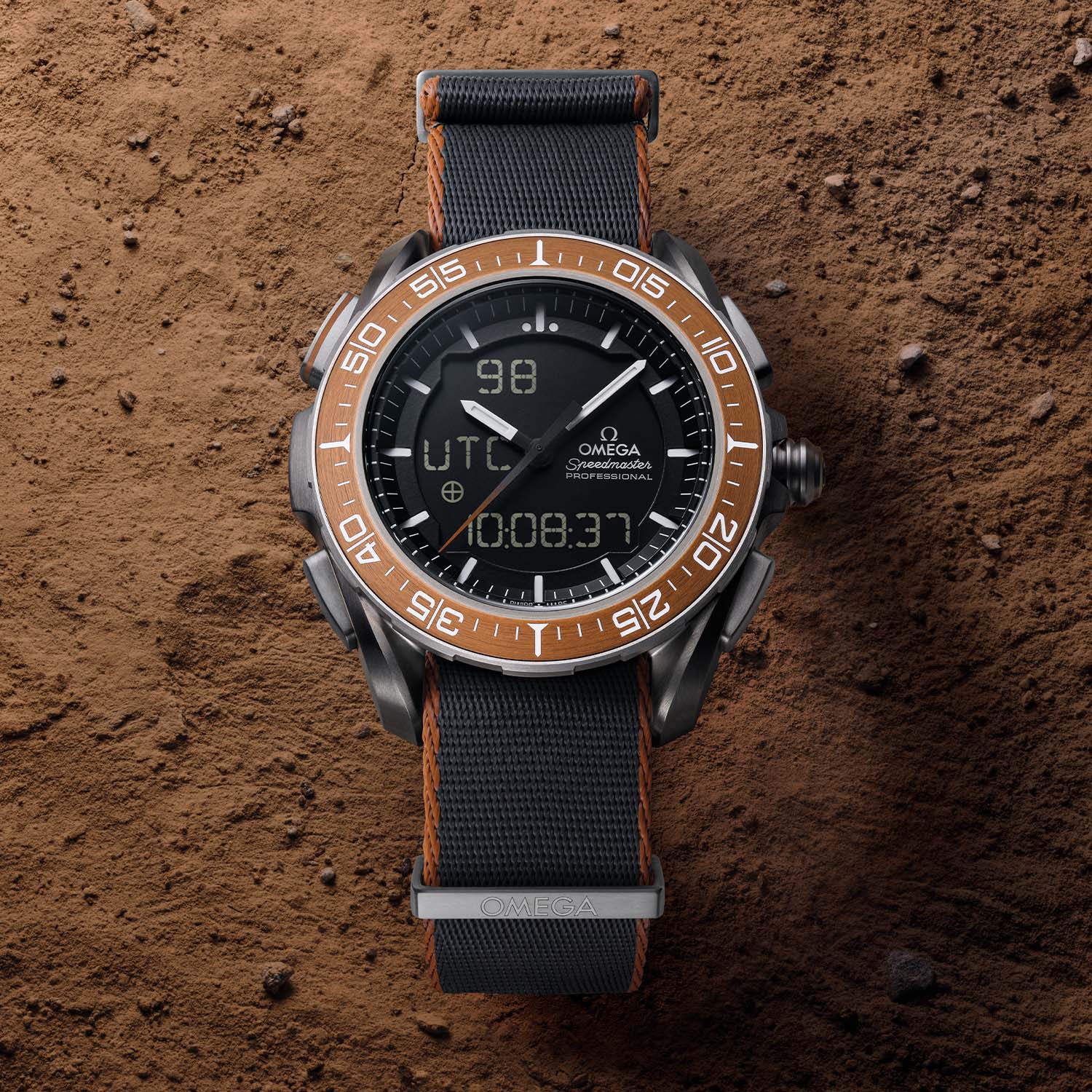 Visually-speaking, the new Speedmaster X-33 Marstimer feels familiar. The 45mm grade 2 titanium case, with multiple, well-integrated pushers and an overly protected design is still there. The main update for the design concerns the bezel, which has an obvious Mars theme, with its oxalic anodized aluminium bezel ring in red hematite colour, reminiscent of Mars’ distinctive dust. This colour is also present on the seconds hand, which has a black to red hematite gradient tone. The bracelet is also identical, and so is the caseback. Dimensions haven’t changed either, with a 14.7mm height and reasonable 48mm L2L.

The “dial” of the Speedmaster X-33 Marstimer is still an LCD display with backlight function, with a combination of analogue (hours, minutes, seconds) and digital indications. But now, there are some Mars-oriented functionalities added to the watch, as per the requirements of ESA. According to the agency, the functions had to be adapted, for the main reason that a day on Mars (a Sol) is 39 minutes and 35 seconds longer than on Earth. This makes things rather difficult with the need to coordinate actions between different members of a mission on Mars surface, but also to make sure contact with space control is accurate too, with them being on classic Earth time. Mars thus has its own time-zone, but also its own pace. 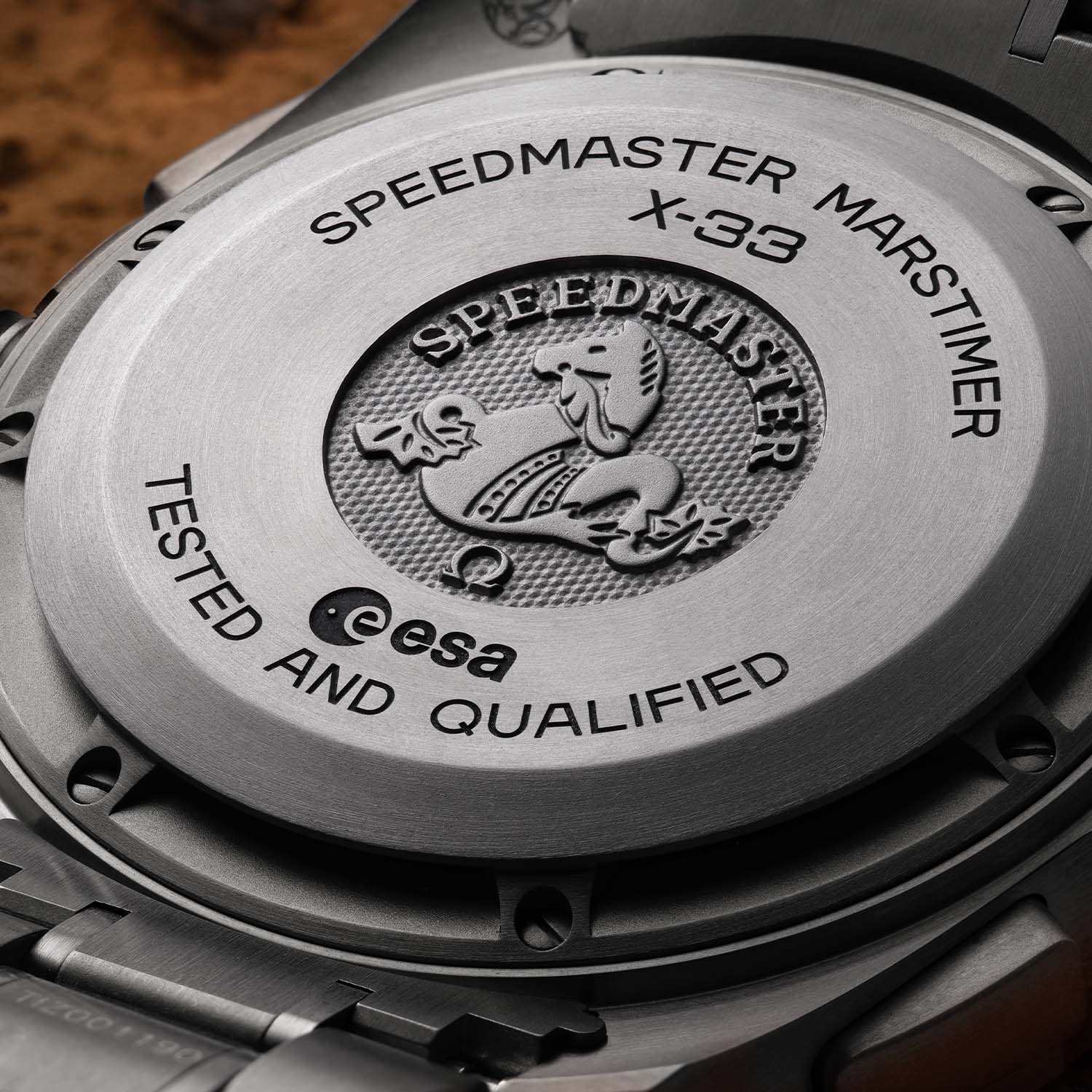 The watch now includes an innovative solar compass, to find true north on planet Earth and Mars. And of course, they also have access to applications available on the traditional Speedmaster Skywalker X33, such as MET (Mission Elapsed Time), PET (Phase Elapsed Time), alarms and perpetual calendar. The calibre 5622 inside the watch, a quart-powered engine, otherwise features all the functionalities previously included. It has a battery life of 24 months and is enclosed behind a titanium caseback with “SPEEDMASTER X-33 MARSTIMER, ESA TESTED AND QUALIFIED” mention. 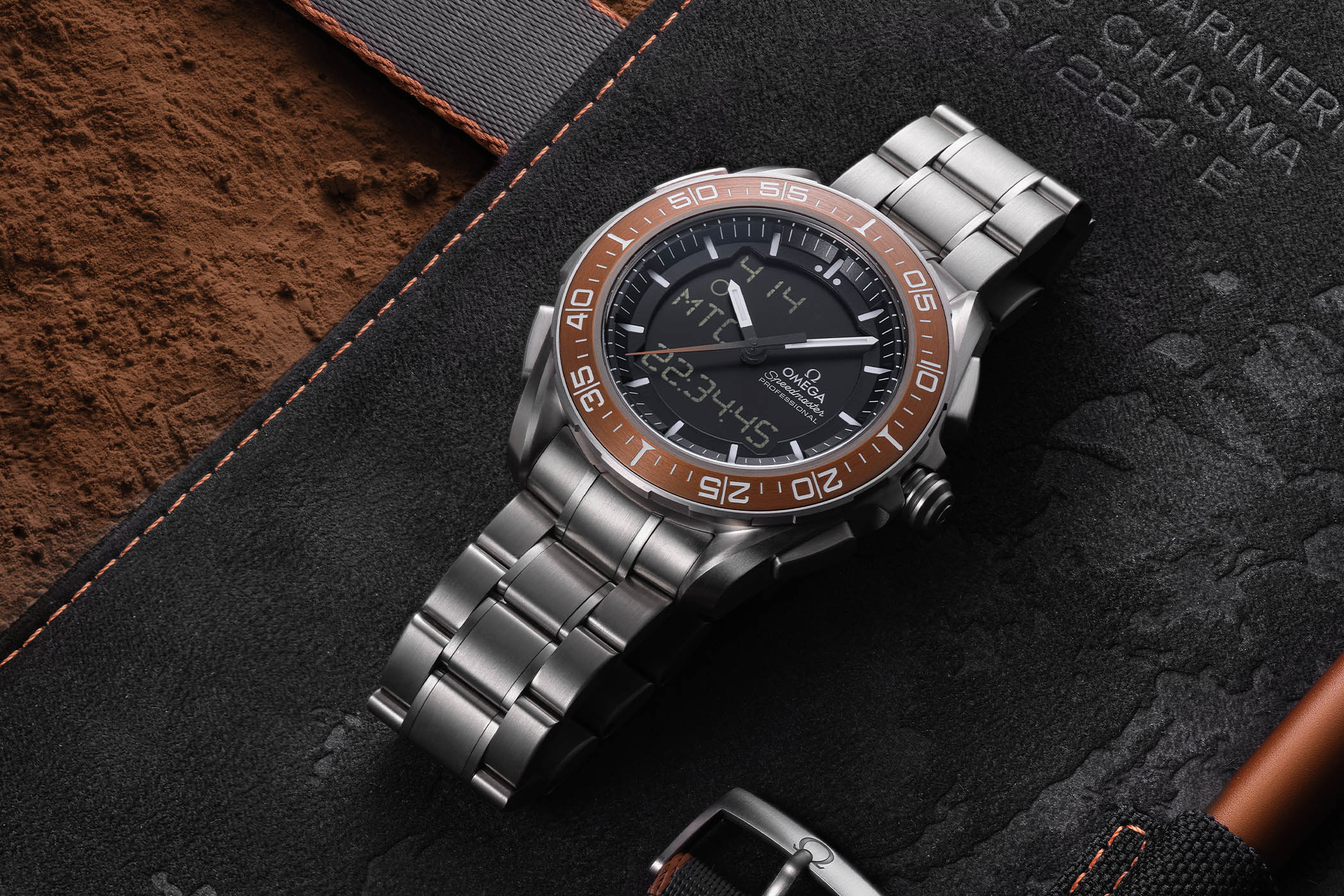 The Omega Speedmaster X-33 Marstimer is presented on a grade 2 and grade 5 titanium bracelet, and a dedicated NATO strap and strap changing tool are also included in the special watch roll with a reproduction of Hebes Chasma, a unique steep-sided canyon on the surface of Mars.

The Omega Speedmaster X-33 Marstimer will be launched as a non-limited edition and will be priced at CHF 5,900 (excl. taxes). For more details, please visit www.omegawatches.com.