This is it… The big news for Omega, the new James Bond watch! After a limited 007 edition based on the Seamaster Diver 300M celebrating the 50th anniversary of the 1969 film On Her Majesty’s Secret Service, it is time for the real deal, the watch to be worn in the 25th opus of the 007 series, No Time to Die. And with its new titanium case, its military elements on the dial and caseback, its reference to the British army, its highly vintage inspiration, the Omega Seamaster Diver 300M 007 Edition makes quite an impression – and it’s in for the long run because it’s not a limited edition. 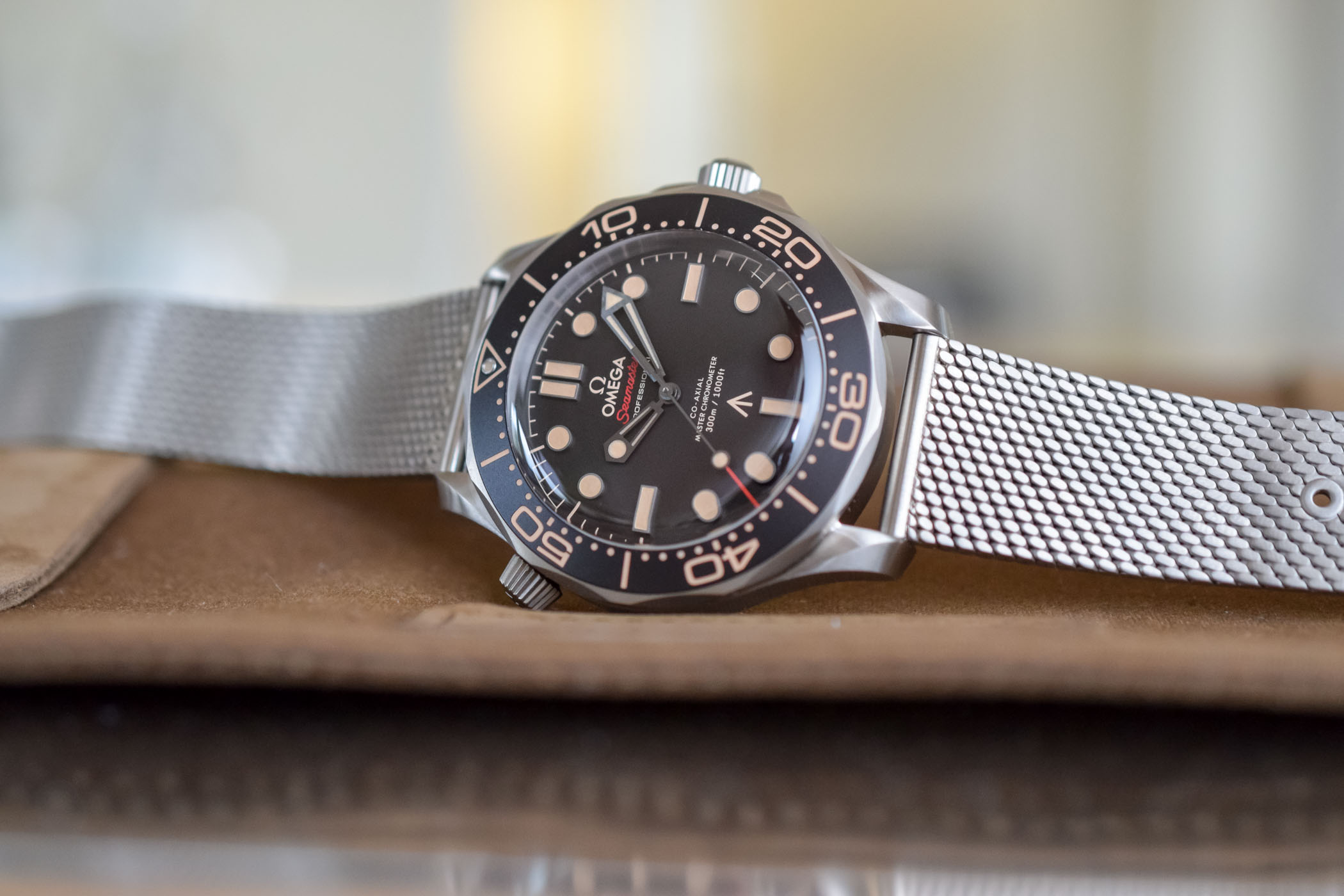 Since Goldeneye (1995), movie franchise James Bond relies on Omega to provide the official timepiece worn by the secret agent. Not only an accessory but a real part of Bond’s equipment, the Seamaster has enjoyed some pretty high-profile appearances – something we examined closely in this retrospective article.

1995 marked the revival of the Bond saga, with new actors, new direction and a more modern approach to the 007 concept. Goldeneye remains one of the most striking instalment of the series, and also marked the arrival of Omega watches on the wrist of Bond. For his first appearance on the silver screen as Bond, Pierce Brosnan was wearing a watch that would later become known as the Bond Watch, the Seamaster 300m Quartz Professional ref. 2541.80. Indeed, at that time, mechanical watches were not entirely back on the scene and the quartz model was certainly the most successful of the collection.

The choice for this watch is perfectly explained by Lindy Hemming, Oscar-winning costume designer, responsible for casting 007’s watch in GoldenEye. She said: “I was convinced that Commander Bond, a naval man, a diver and a discreet gentleman of the world would wear the Seamaster with the blue dial.”

The same watch, however, with an automatic movement, under reference 2531.80.00, would later be featured in Tomorrow Never Dies (1997), in The World Is Not Enough (1999) and finally in Die Another Day (2002). It features the same blue dial with wave pattern, a blue bezel, the same 5-link bracelet and the same 41mm steel case with 300m water-resistance and a helium escape valve at 10 o’clock. Although the watch is the same in these three movies, it is fitted with different gadgets.

In 2006, James Bond 007 is incarnated by Daniel Craig in Casino Royale marking the arrival of a new actor, a new director, a new production team, and overall a new style for a modernized, more realistic Bond. And although watches appear throughout the entire movie, gadgets are no longer a part of the equipment. Two watches are visible, a Seamaster PO 600m and a Seamaster Diver 300m, this time with calibre 2500 and co-axial escapement. And, of course, all watch lovers will remember the famous train scene when Vesper Lynd inquires about Bond’s watch… 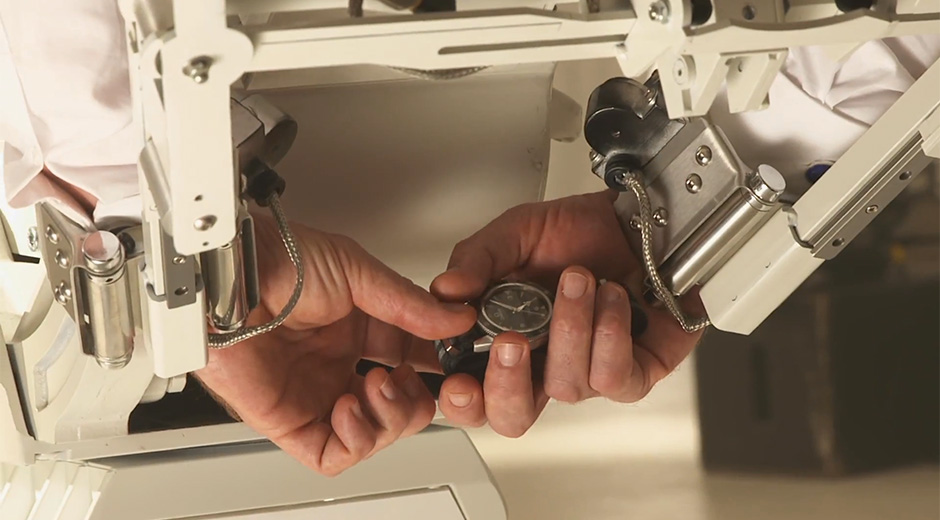 Finally, for Spectre (2015), Omega developed a special edition watch with military credentials and a couple of integrated gadgets (a timer and a bomb). This watch was based on the Seamaster 300 with a specific 12-hour bezel, a lollipop seconds hand, large patinated indexes and a 5-stripe NATO strap, reminiscent of those used by the RAF.

Well, now it’s time for the new James Bond watch, marking a return to the roots with a model based on the recently revived Seamaster Diver 300M – in short, the new edition of the original Bond watch, with its wave pattern on the dial. The main difference here is that Omega has created a totally new version: a new case, a new material, a new look, a new dial, new bracelet/strap, new caseback, new crystal, new display… Well, the new Omega Seamaster Diver 300M James Bond remains a Seamaster Professional, but is almost an entirely new watch! And, yes, it looks very cool. 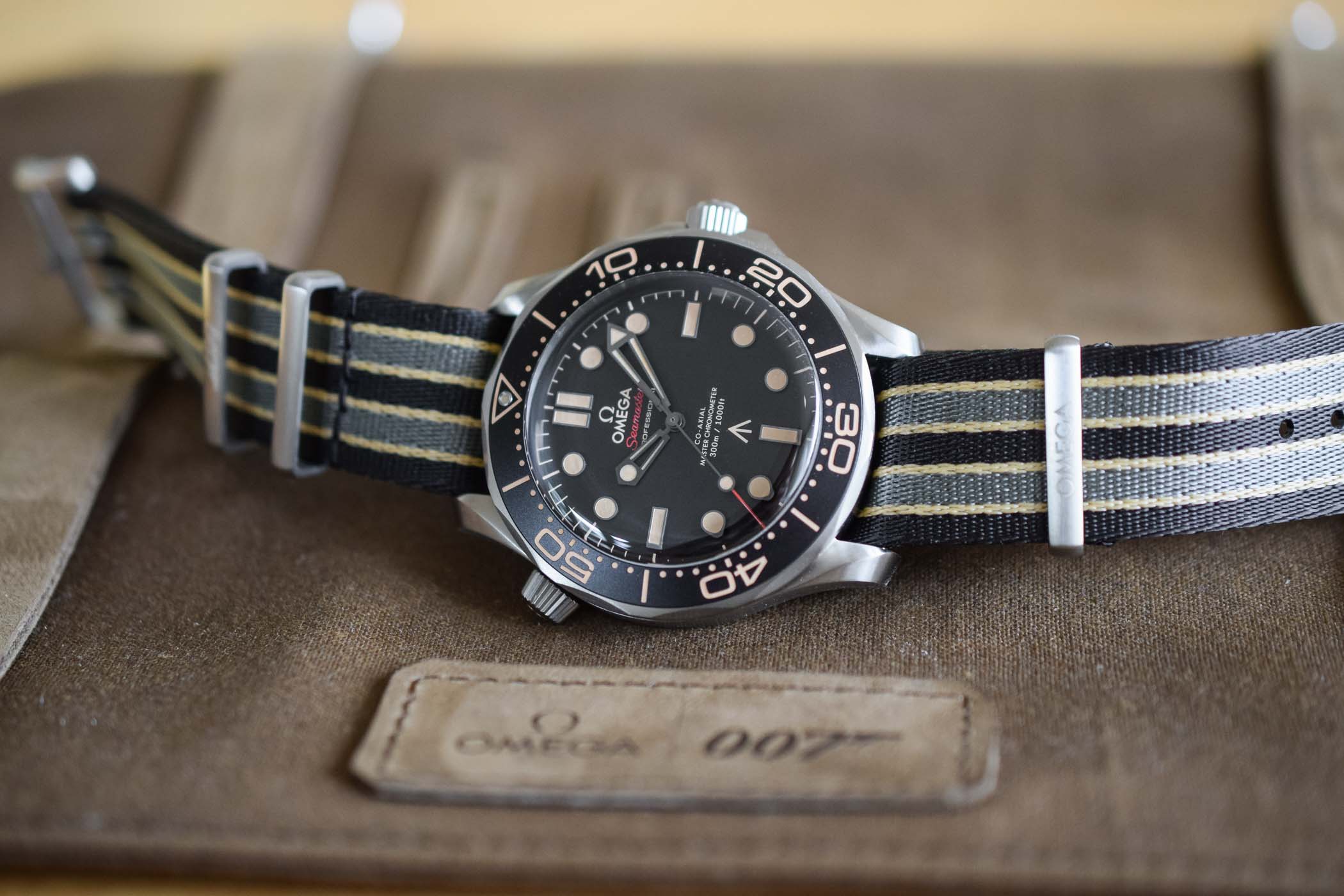 Starting with the case, the new Bond watch retains the classic shape of the Seamaster Diver 300M, with its scalloped bezel, its twisted lyre lugs and an all-time classic 60-minute bezel. Still, all the rest is new or different. While the case still measures 42mm in diameter and circa 13.5mm in height, it is now executed in grade 2 titanium and entirely brushed. This means that the case is lighter, more robust, more scratch-resistant, darker in colour and, altogether, gives this watch a much more toolish aspect. 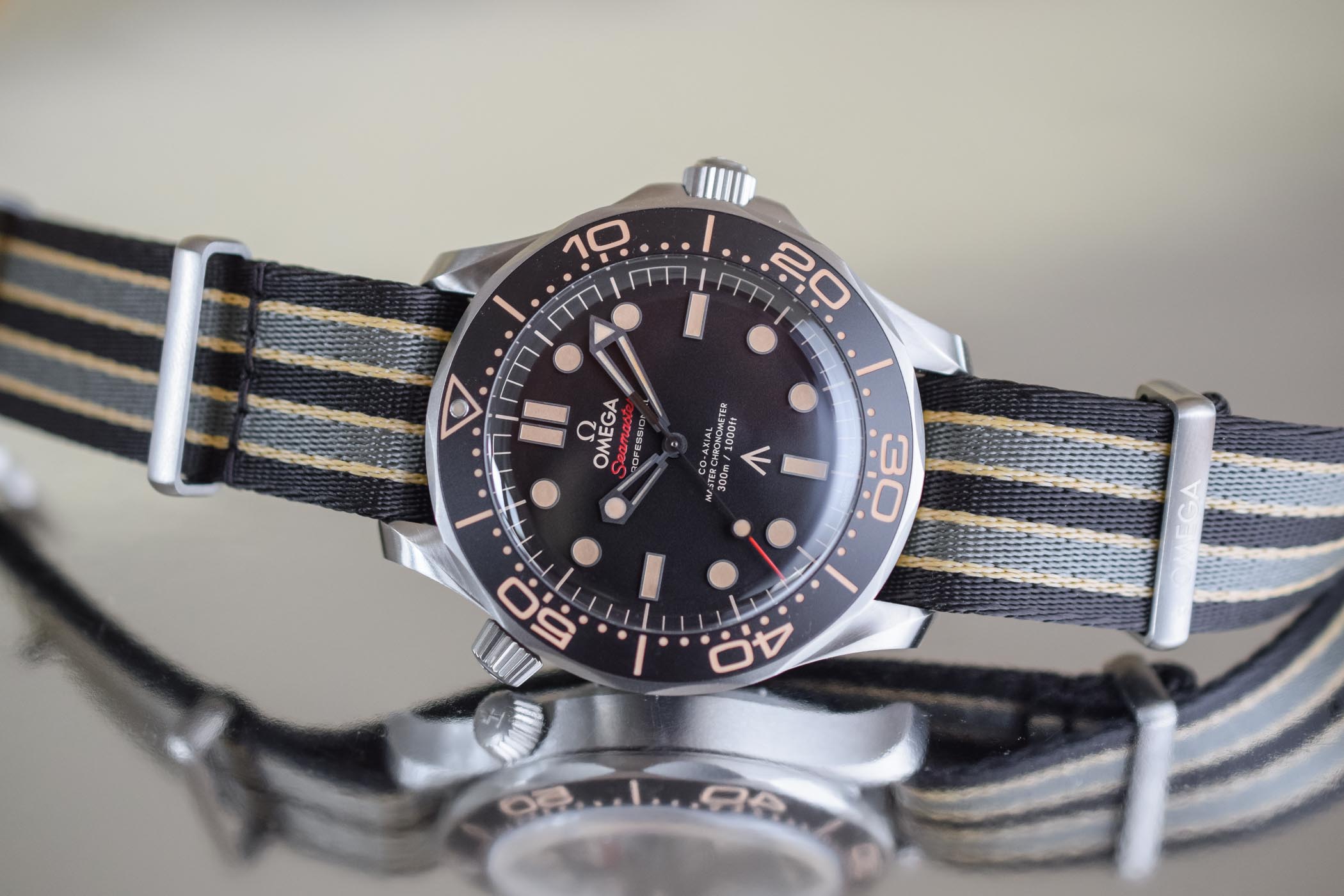 The same goes for the bezel. While it retains its 12-sided profile, its unidirectional functionality and ceramic insert, it is now made from titanium. However, the polished ceramic surface and white enamel scale have been replaced with a matte black, slightly tropical ceramic insert with an engraved 60-minute scale in cream. The dot at 12 o’clock is the same cream colour. The watch itself retains the same specifications and features as the standard model, with its 300m water-resistance, a helium escape valve but has a new, box-shaped sapphire crystal on top, reminiscent of a vintage Plexiglas. This adds charm and distortions to the new Seamaster Diver 300M James Bond.

This new 007 Edition is worn on a Milanese titanium bracelet with straight end-links, once again in line with the military/tool inspiration of the watch. The bracelet is light, relatively thin and comfortable. A striped NATO textile strap is also included, with a combination of black, cream and grey lines.

The back of the watch is also different from the standard edition of the Seamaster Diver 300M, which now features a see-through back. Here, on this Bond version, the caseback is plain titanium, has the classic NAIADLOCK (inscriptions always aligned) and several engravings, including the military arrow – the broad arrow frequently seen on military dials and casebacks, is the traditional marking for Crown’s property. This sign was visible, for instance, on Dirty Dozen RAF watches. Next to it are some numbers, which refer to old MoD issued numbers. 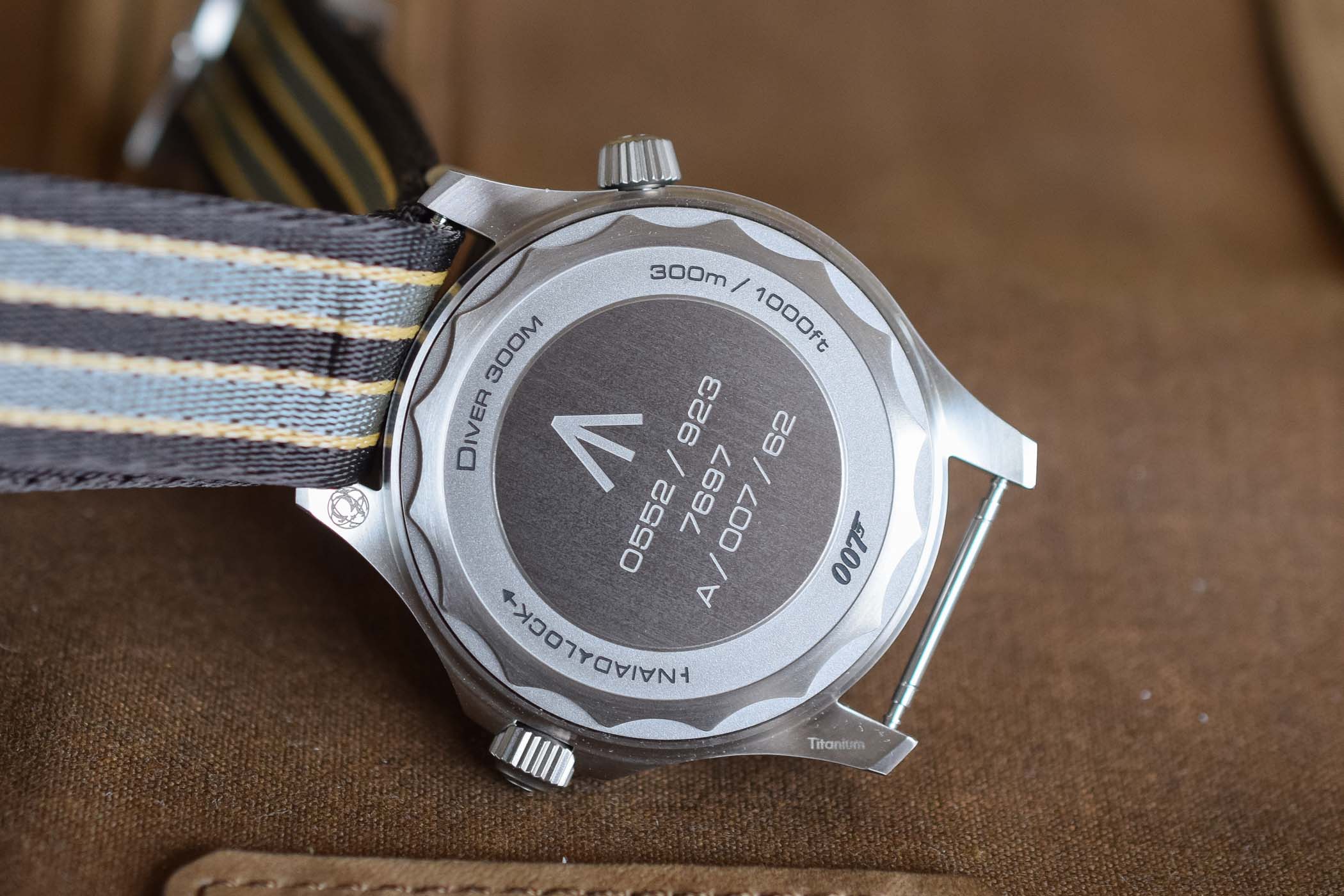 Inside the case is the calibre 8806, the no-date version of the calibre 8800 seen in the black ceramic SM300. This Master Chronometer movement, with co-axial escapement and METAS certification, is among the best industrialized automatic movements now available. Solid, precise, resistant to magnetism… It runs at 25,200vph and stores up to 55 hours of power reserve. 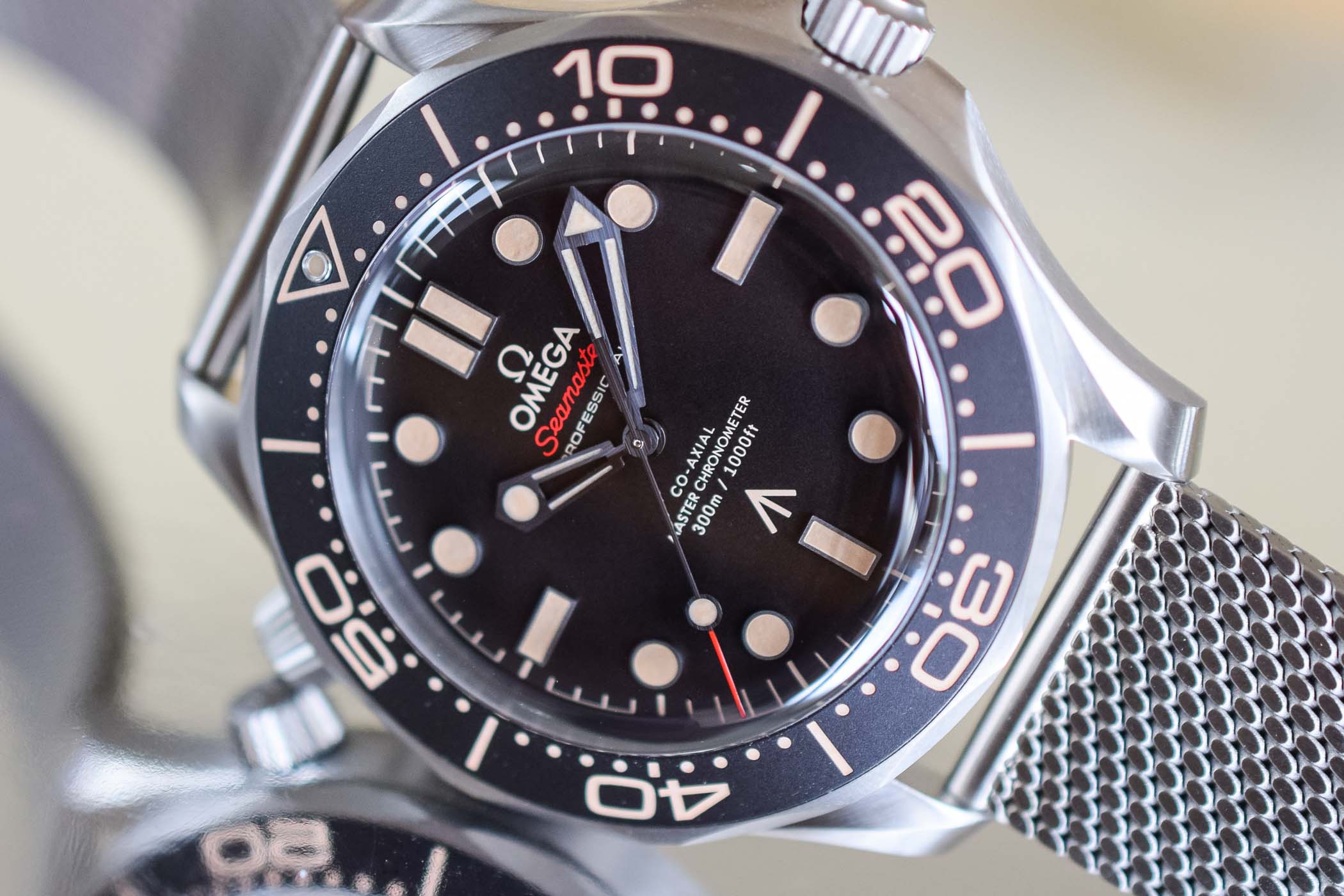 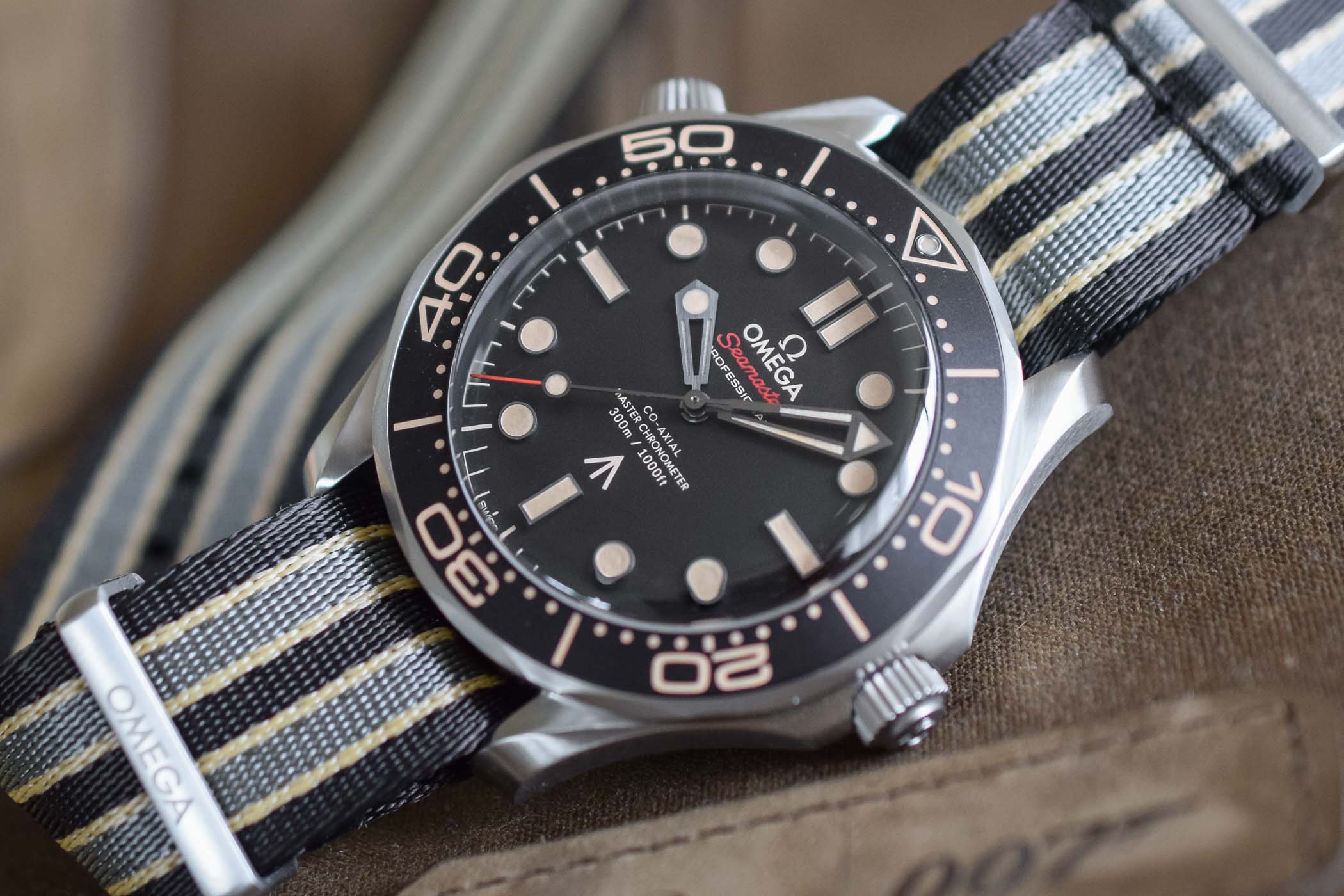 Finally, there’s the dial. While the markers and hands are the same shape as previous models, the dial of this Omega Seamaster Diver 300M 007 is flat, without the wave pattern, and no longer crafted from polished ceramic. The matte black, again slightly tropical texture helps to enhance the military/tool aspect, the cream Super-LumiNova brings the vintage touch and the no-date display adds the cool factor. Note the red « Seamaster » inscription as well as the broad arrow once again visible on the dial, another reference to Bond’s career in the British military forces. The hands, as well as the rings surrounding the markers, are now brushed, once again to reinforce the field look of the watch.

With its new titanium case, its military details and the vintage elements – dial, markers, box crystal – this new Seamaster Diver 300M 007 Edition is, without a doubt, the best-looking, most desirable version in the collection. And in addition to that, the lightweight case and bracelet make it ultra-comfy and resistant to action. No need to mention the innovative movement, yet the price is rather steep compared to the standard edition. 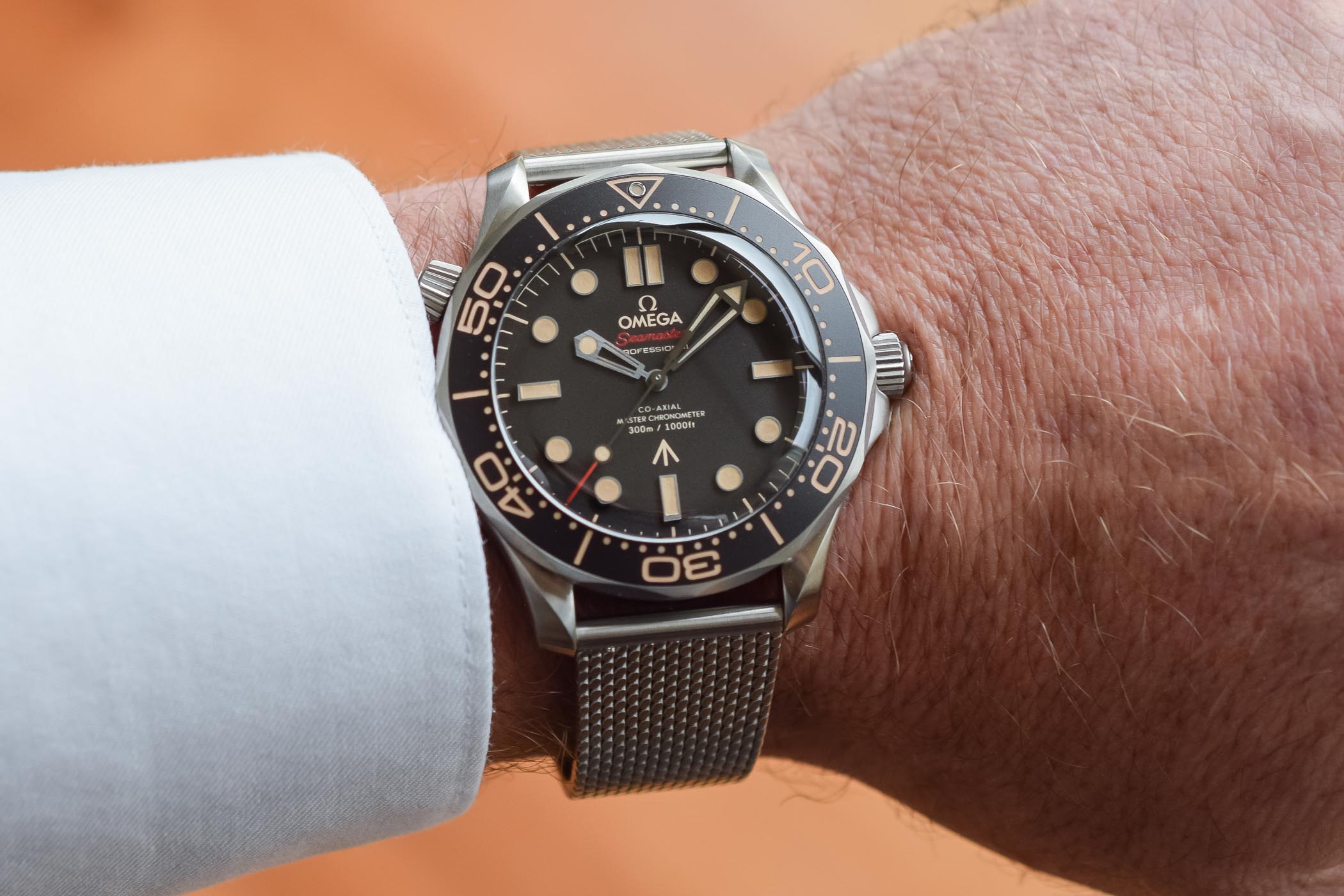 The Omega Seamaster Diver 300M 007 Edition (reference 210.90.42.20.01.001) is not a limited edition and will be available to the general public at boutiques and retailers. It is there as part of the permanent collection and isn’t supposed to be linked to the launch of the movie or to a specific event.

The new Omega Seamaster Diver 300M 007 Edition will be priced at EUR 8,640. More details at www.omegawatches.com.