Earlier this year, Omega revived one of its iconic watches, the 1980s-inspired Constellation watch with its characteristic case shape, its bezel with claws and a trendy integrated bracelet or strap. Based on the bold Constellation ‘Manhattan’ concept, the 2020 models brought a cleaner design, some textured dials and mostly a mechanical update with Master Chronometer movements. Available in 39mm until now, the brand adds new 41mm models to the collection, with a slightly sportier look and an even more powerful movement. Overview of the new Constellation Co-Axial Master Chronometer 41mm.

Even though the Omega Constellation started out life as a gent’s chronometer in 1952, as we’ve explained in this in-depth story here, a strong shift in style occurred in 1982 with the launch of the ‘Manhattan’ family, introducing an entirely new profile for this watch – a style typical of the 1980s. Still powered by quartz movements, the distinctive feature of this collection was the four screwed griffes or claws extending from the case over the dial. Positioned at 3 and 9 o’clock, the highly polished claws would become the hallmark feature of the Manhattan. Aesthetically arresting, the claws also performed a practical function holding the sapphire crystal and gasket firmly against the case to ensure water-resistance. 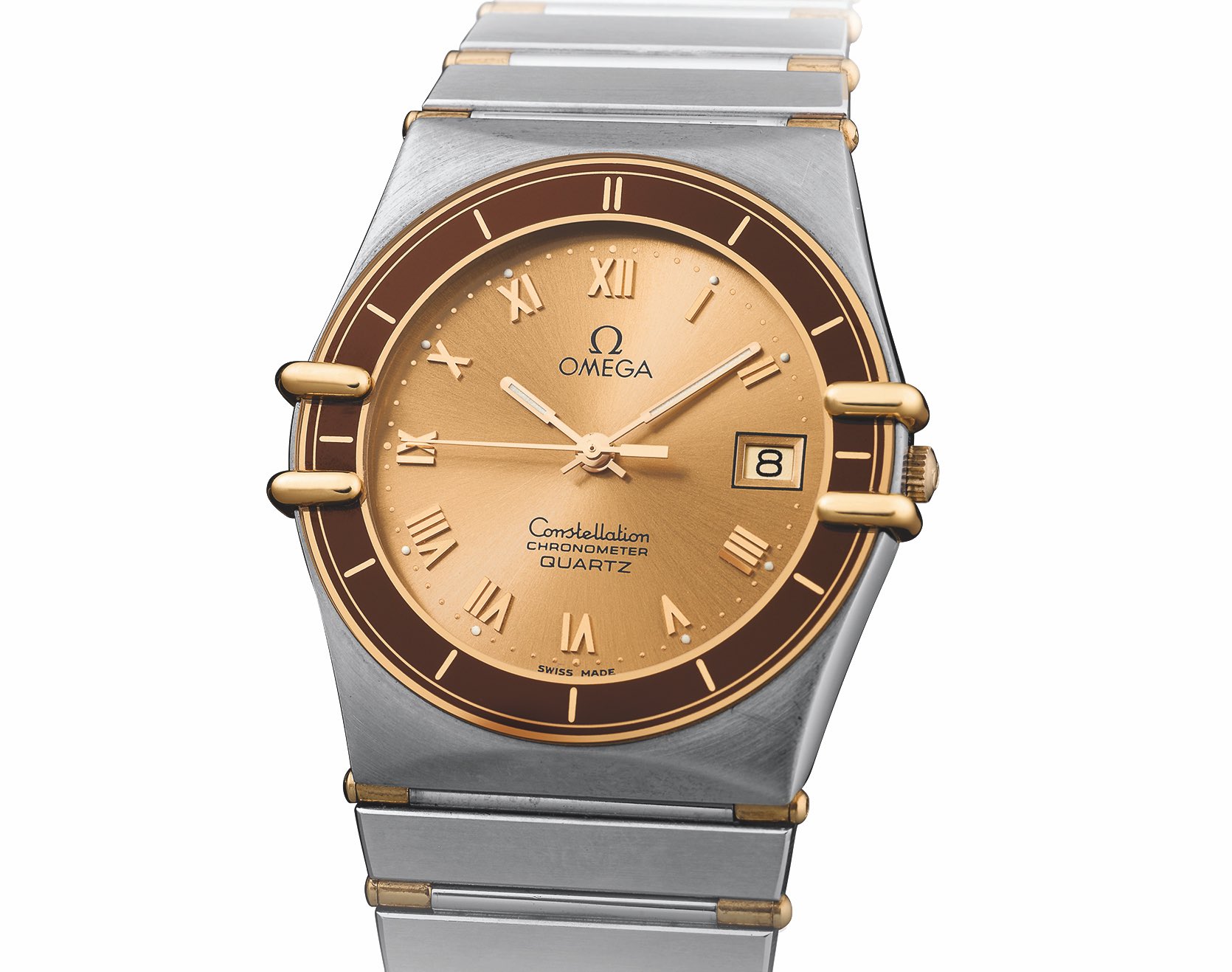 Designed by Carol Didisheim and patented in 1985, the Manhattan featured a barrel-shaped case and was offered to both men and women in gold and steel and combinations of both metals. The rounded case top was scalloped at both ends and, as Omega Constellation expert and blogger Desmond Guilfoyle points out in his essay, there was not “one sharp line on the entire case and bracelet – even the case back edges are rounded off.” Another unusual feature of the first Manhattan models was the fact that the hour markers and chapter ring were painted directly on the crystal instead of being placed on the dial. Finally, the watch is best known for its integrated metal bracelet with hinged links – yet leather was also optional.

Some evolutions are to be noted regarding the Manhattan watches and subsequent Constellation watches, which will all stick to this barrel-shaped case and integrated bracelet/strap architecture… and of course to the griffes on the bezel. In 1984 an automatic version of the Manhattan was introduced alongside the regular offering of quartz. In 2003, the Constellation Double Eagle – launched at the Omega European Masters Golf Tournament – was upgraded with Omega’s first Co-Axial calibre 2500. A major step into the Constellation’s history occurred in 2015, with the introduction of both Omega’s Master Chronometer certification and the new Globemaster watch, which paid tribute to the early “Pie-Pan” watches. Yet, this watch isn’t part of the specific Constellation line-up we’re looking at today. For 2020, Omega brings back the 1980s style at centre stage with the introduction in January of the new Constellation Co-Axial Master Chronometer 39mm, in a complete collection with steel, two-tone and gold models. The dials are cleaner, some adorned with textures and the case/bracelet combination has been reworked – all more subtle and better finished. Finally, the watch is now equipped with the brand’s latest technology, the Master Chronometer Calibre 8800. As you can imagine, this new version is not changing drastically what Omega has done earlier this year. No surprises here, as the basics of the 39mm edition are kept for this 41mm edition, yet with multiple changes to make the watch different and not only larger in diameter. 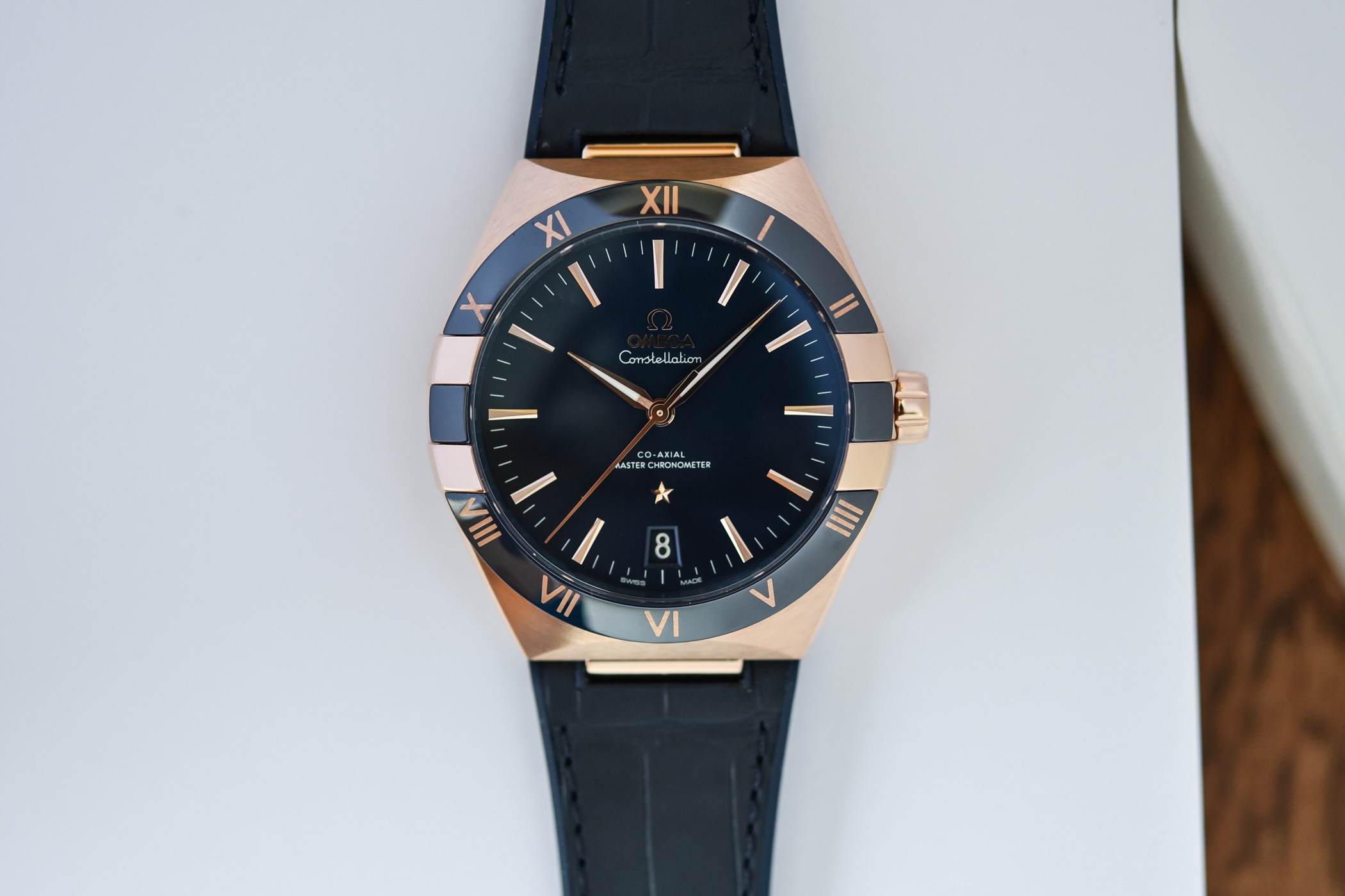 As for the case, besides the slight increase in proportions – both the diameter is larger but the case is also a bit thicker (about 1 extra millimetre) – the rest has been kept, starting with the distinctive barrel shape with multiple curved facets. The case retains its radial and straight brushed surfaces, depending on the areas, as well as the nice polished bevels on the sides to bring some dynamism. The crown is conical, as most modern Omega watches, a sapphire crystal is found on both ends of the watch and the water-resistance is rated at 50 metres. 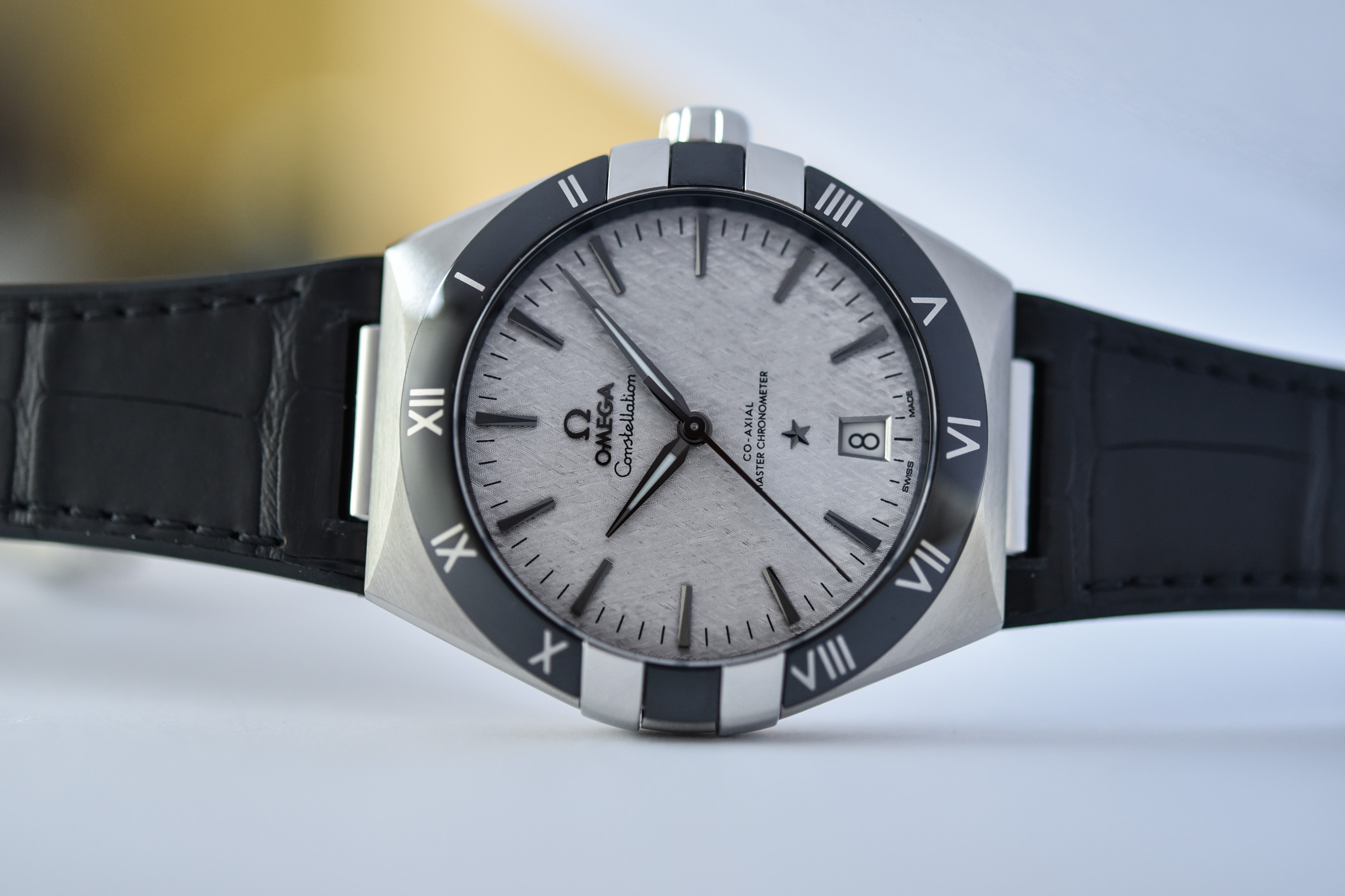 If the signature claws/griffes on the sides are retained and executed in the same metal as the case, the bezel itself can now be made of polished ceramic, adding contrast and a sportier touch to this elegant offer – note that one steel model retains the steel bezel with blackened Roman numerals. In the two versions we had with us for this hands-on session, the bezel was either black with silver LiquidMetal Roman numerals or, on the Sedna gold model, dark blue with gold Ceragold Roman numerals, thus matching the dial’s colour scheme. This contrasting ceramic bezel has two advantages. First of all, it somehow makes the watch visually more compact and the bezel less present to the eye. It refocusses the eye on the dial rather than on the case – less metal is perceived. Second, the contrast adds a more casual touch and even reinforces the presence of the signature claws.

As for the dials, this new Omega Constellation Co-Axial Master Chronometer 41mm retains the style that was introduced with the 39mm model. This means a new handset, with a thinner profile, and applied hour marker slightly longer but also thinner – and still triangular facetted with a combination of a brushed top surface and polished edges. The date has been moved to the 6 o’clock position, a recurring thing for modern Omega watches. Multiple colours are available, as well as textures. For instance, the steel model here is equipped with a finely textured silvered dial, a bit ‘snowflake’ in style, with hands and indexes matching the bezel. Discreet but visible enough to bring modernity. The other model here, a blue on Sedna gold version, has a smooth blue dial with gold-coloured fittings – a nice choice to tone-down this gold, so more present model. 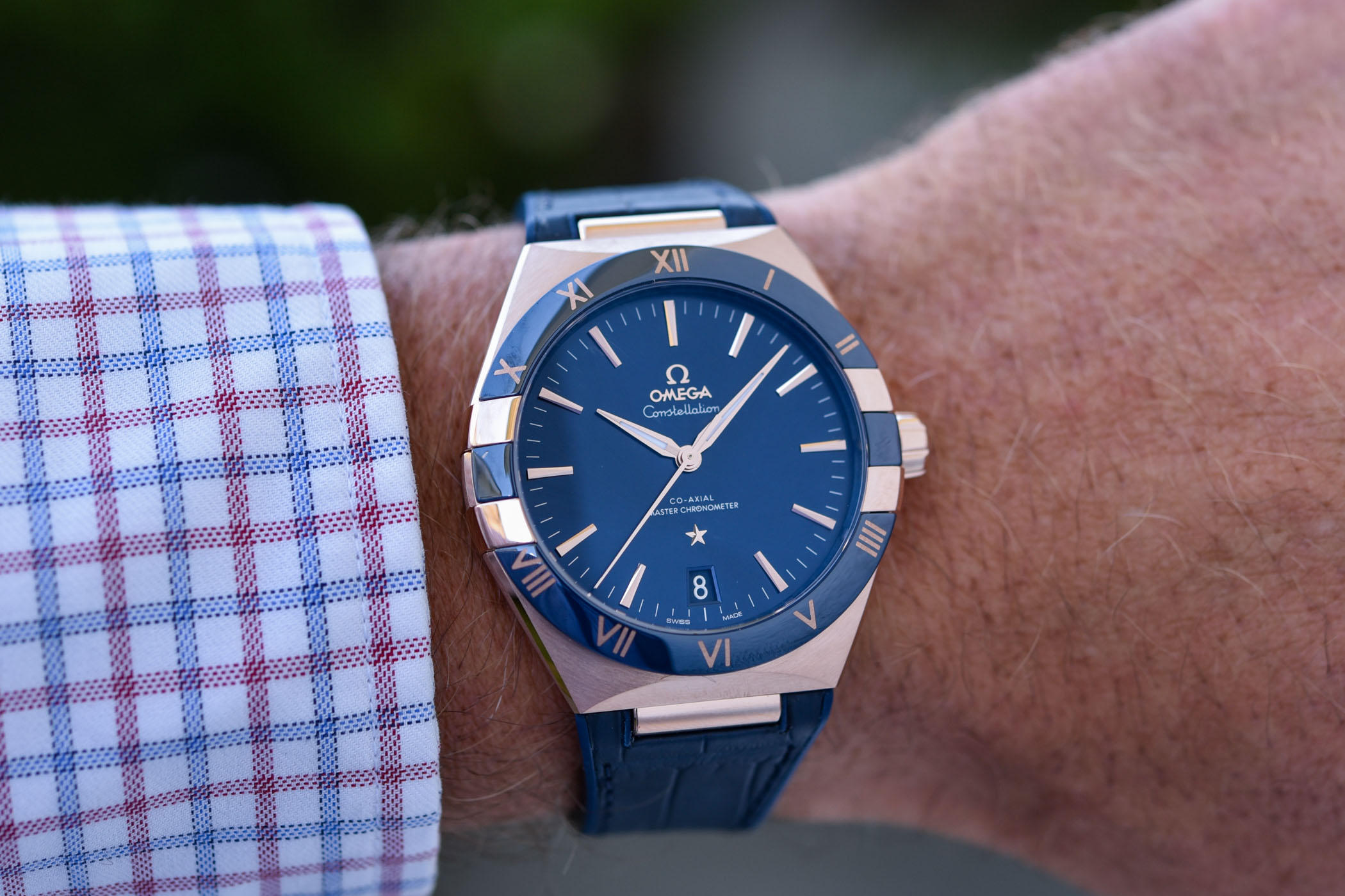 Unique this 2020 Constellation Co-Axial Master Chronometer 41mm collection, a new strap option will be available. To continue with its more casual and sportier attire, Omega fits here an integrated leather strap with an anti-bacterial rubber lining. Supple and comfortable, these are closed by a folding clasp. A decorative metallic link connects each side of the strap to the case. The metallic bracelets or the full leather straps of the 39mm models will also be available on these 41mm editions. Last evolution compared to the 39mm, which was equipped with the Calibre 8800, this new 41mm edition has a more powerful engine, the Calibre 8900 (or 8901 for the gold version). This automatic movement is equipped with a double-barrel, allowing for 60 hours of power reserve and a better distribution of energy. The movement is, as expected from its Master Chronometer certification, equipped with Omega’s latest technologies, meaning a co-axial escapement, silicon parts and an impressive resistance to magnetic fields. Visible through the caseback, it is classically decorated with Arabesque Geneva stripes and blackened screws.

While we’re usually not thrilled about the idea of larger watches, in this case, this new edition comes with cool improvements, mainly due to the contrasting bezel that tones down the style and makes it more modern. Certainly, men with smaller wrists will prefer the 39mm edition, however, this updated design makes the watch (to us) more desirable and contemporary. In any case, the lug-less shape, the compact case and the well-integrated straps make this watch comfortable. And the addition of the Calibre 8900 is a plus. 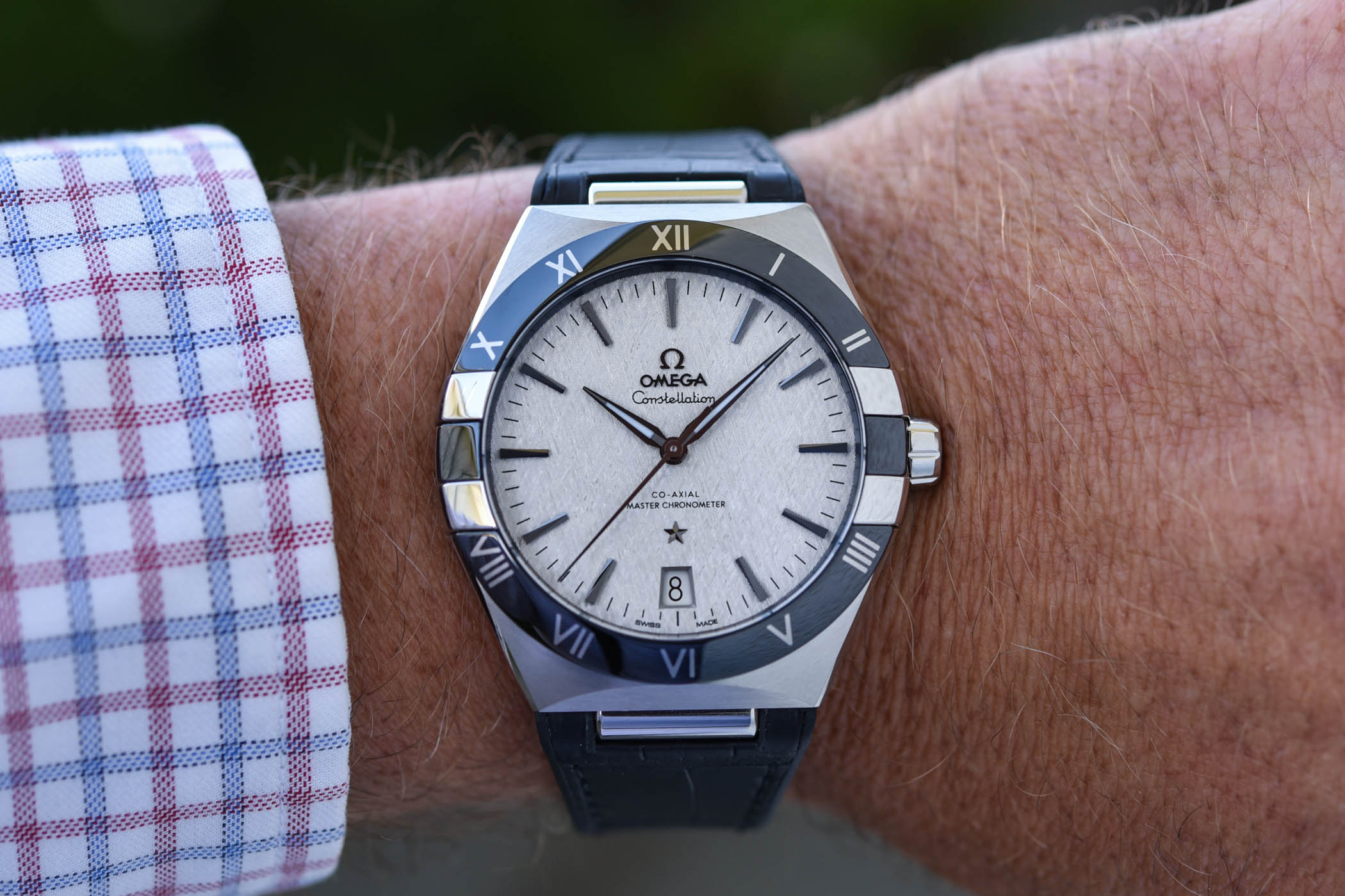