With a continuous production of almost 200 years (founded 1832), Longines is one of the Swiss watch brands with the richest history. No wonder by its Heritage collection is filled with some of the coolest vintage-inspired watches currently on the market. The brand is a specialist of the genre, bringing retro-styled watches with modern features and mechanics. Today, the brand revives (again) one of its signature 1950s futuristic designs, a watch that was built when race cars and supersonic aeroplanes appealed to the imagination. Here’s the 2021 edition of the Longines Silver Arrow.

The story of the Longines Silver Arrow goes back to 1955 when the brand held an in-house contest to find the name for a new timepiece with an avant-garde design. A name emerged that was based on one of the 450 proposals: Silver Arrow – a reference to the famous German sports cars that dominated the racing circuits of the era. The first Silver Arrow was released by Longines in 1956. Back then, each of the brand’s collections bore an emblem. And this futuristic model was no exception to the rule. 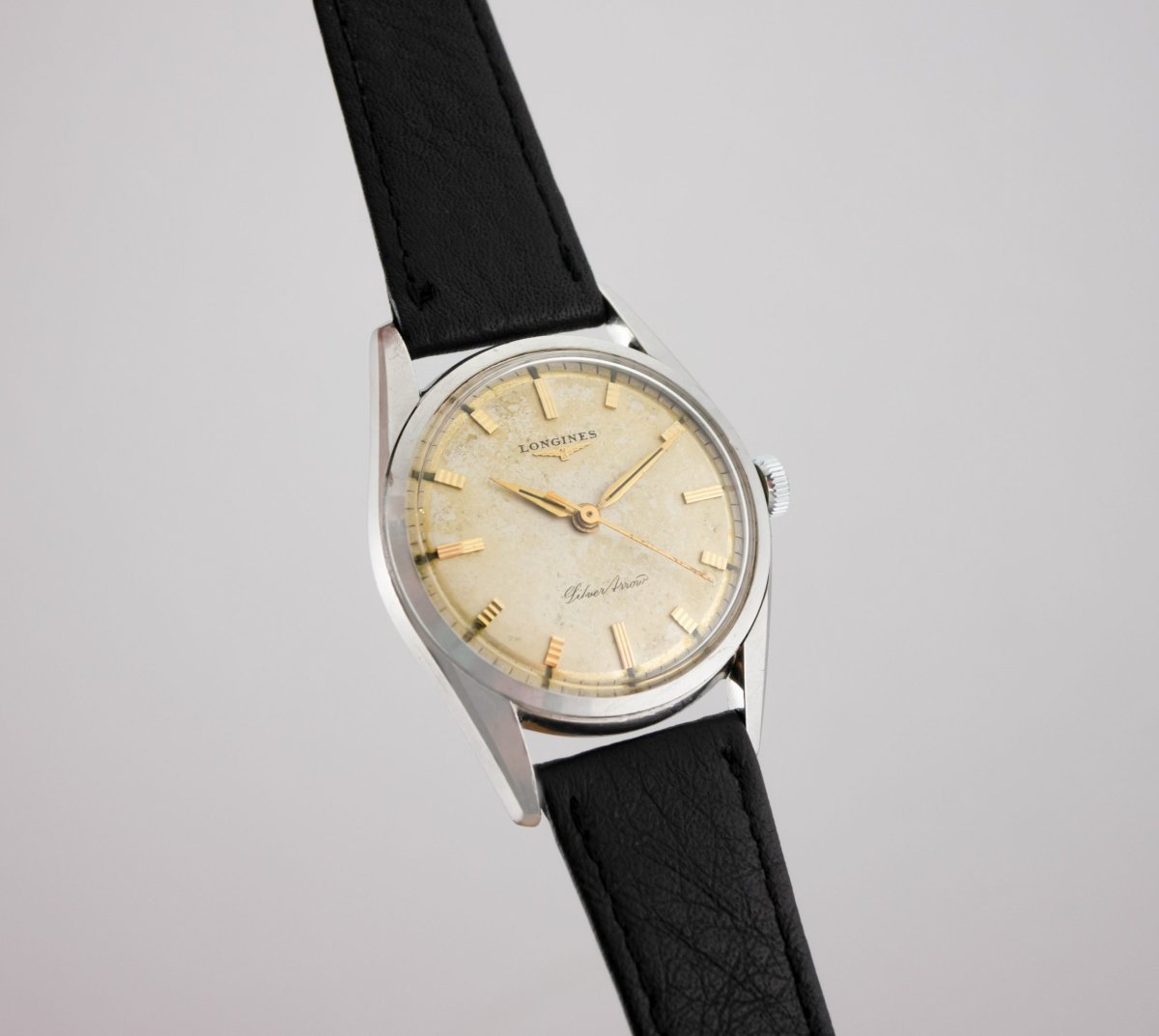 To symbolize its connection between racing circuits and celestial paths, the caseback of the Silver Arrow was decorated with a supersonic plane flying through the stars. While being a simple time-only watch, the dial was adorned with contemporary elements, such as the sharp sword-shaped hands and the cool texture of its striated indexes. It isn’t the first time that Longines brings back the Silver Arrow concept, as in 2009, the brand already launched a watch inspired by this 1955 model – back then with a two-tone dial and a date window, but without the emblematic applied indexes. 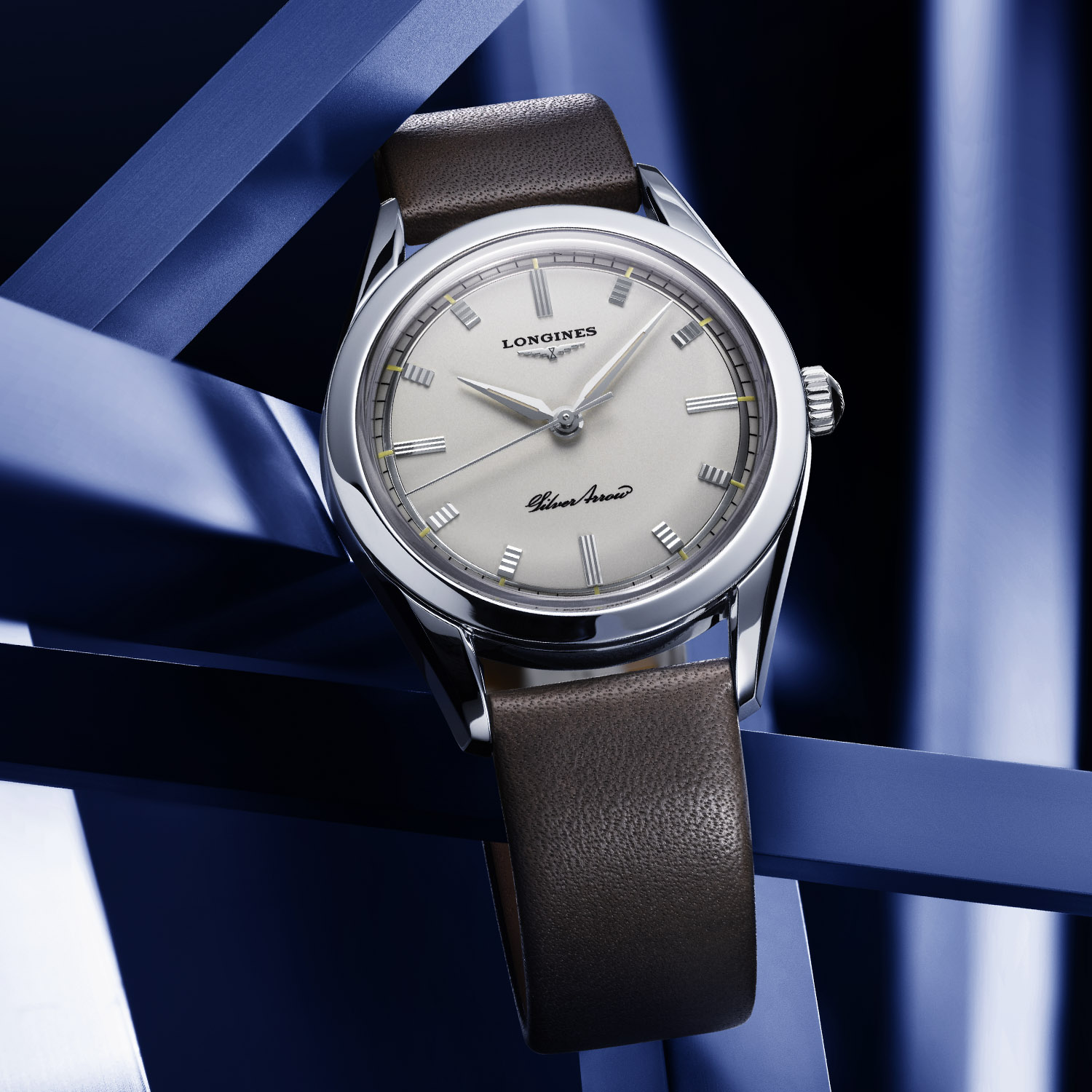 Today, as part of the 2021 collection, the Longines Silver Arrow, with its distinctive sporty elegance and its retro-futuristic silhouette, makes a comeback, with the brand’s traditional Heritage strategy; faithful design, updated proportions and modern watchmaking.

For its newest Heritage model, Longines relies on an enlarged case, which now measures 38.50mm (to be compared to the approx. 35mm of the original 1950s model). Traditionally for the brand, the design retains most of the distinctive elements of the original watch, which includes here the smooth stainless steel bezel and the angled lugs, with bevels on the external side but also on the inner face. Modernized, yet compact, the new Silver Arrow thus continues the strategy seen with the Tuxedo or the Sector Dial models. Classic style, enlarged but still compact proportions. The height of the case isn’t yet specified by should be around 10mm.

The rest of the specifications are pretty classic, with a mix of modern elements and vintage inspirations. The watch is thus protected by a box sapphire crystal, which mimics the look of a vintage plexiglas. Water-resistance is 30m, which makes this model more of a dressy/casual option than a sports watch. It is worn on a 19mm matte brown leather strap with minimalistic look, closed by a steel pin buckle.

The caseback of the Longines Silver Arrow, faithful to the original 1950s version, is decorated with an engraved “Silver Arrow” emblem, once again a supersonic plane flying through the stars.

Recent Heritage models by Longines have shown great attention to details on their dials, both in terms of execution and styling. This is once again true for the Silver Arrow, with its domed dial finished with an elegant, slightly metallic silver opaline finish. Also, the chapter ring is circled by a polished metallic element and discreet inclusions of Super-LumiNova provide nighttime legibility. A cool feature, the emblematic indexes with a striated texture of the earliest Silver Arrow watches are back, here paired with luminous sword-shaped hands. The winged hourglass logo is applied and the stylized name of the watch is printed at 6 o’clock. And vintage enthusiasts will certainly appreciate the absence of a date display and of the “automatic” or “selfwinding” mentions.

Inside the case, the new Longines Silver Arrow doesn’t look at the past and features the brand’s proprietary calibre L888.5. This automatic movement, based on an ETA 2892 ébauche, brings multiple improvements. The power reserve, for instance, is now 72 hours. Also, it is equipped with a silicon balance-spring to ensure high-precision accuracy and enhanced resistance to magnetic fields. Finally, it has been developed to be reliable, proven by the 5-year warranty delivered with the watch.

The 2021 Longines Silver Arrow (ref. L2.834.4.72.2) is released as part of the permanent collection and will be priced at USD 2,100. It should be available from the brand’s online boutique and retailers later this month. More details at www.longines.com.