The Avigation BigEye is one of those great Heritage Longines watches that pay tribute to the rich aviation past of the brand. Launched in 2017 in steel with a black dial, it was modelled after an elusive 1930s watch with quite a resemblance with some glorious post-WWII pilot’s chronograph too. Also, as indicated by its name, the watch was characterized by its oversized minute counter, a design also known as “Big Eye chronographs.” This year, in addition to the black dial model, Longines adds a new and striking version with a gradient blue dial and even stronger vintage colours. And, most importantly, it now comes in titanium. 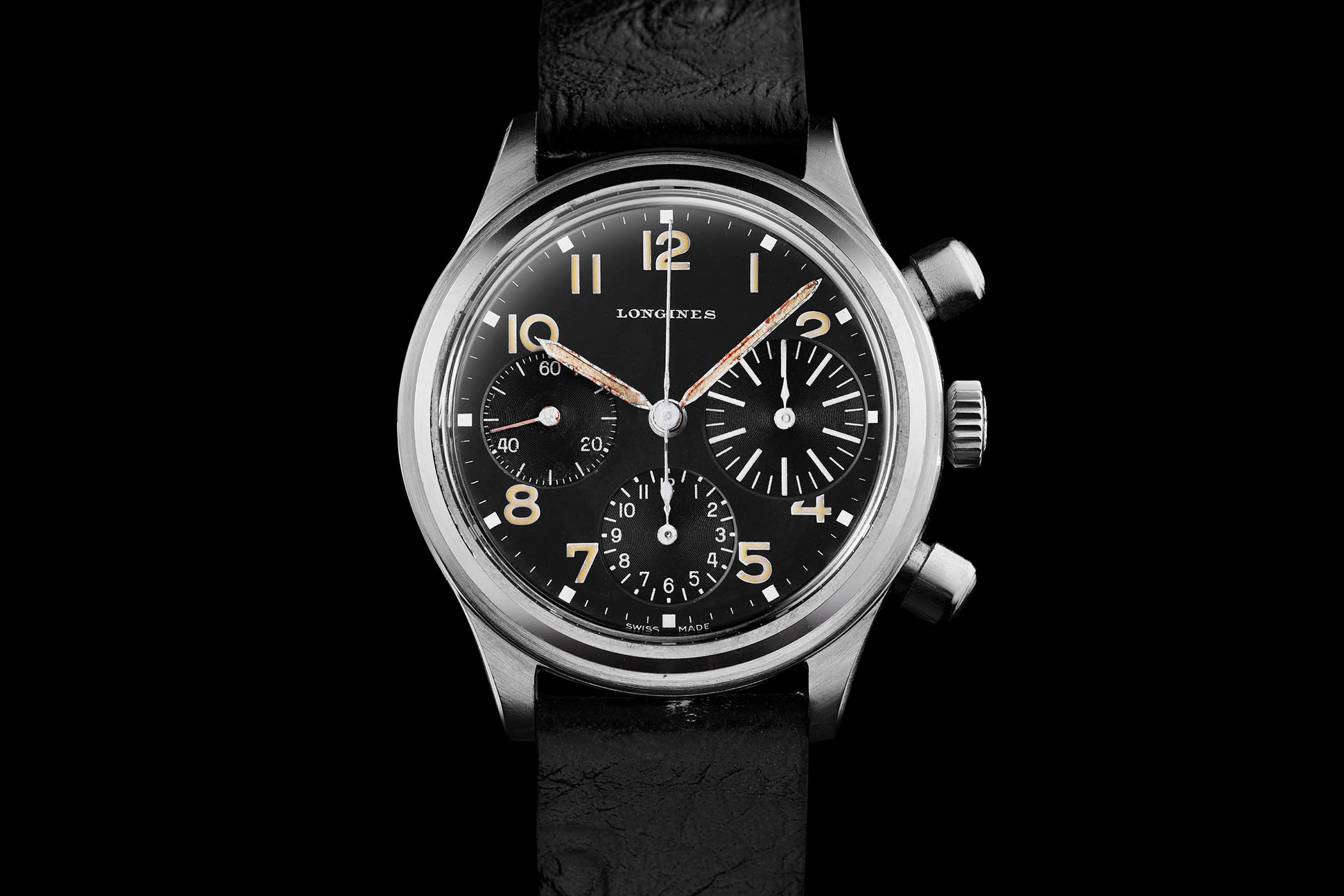 As explained in our review of the steel model, the story behind the Avigation BigEye Chronograph is anything but clear. The design is based on a 1930s pilot’s chronograph that a collector presented to the Longines museum, but the company didn’t have a record of the piece in its archives. Is it a prototype? What’s the exact year? Nothing is truly clear but what makes no doubt is the beauty of the piece in question, hence why Longines was audacious enough to make a re-edition of this model. 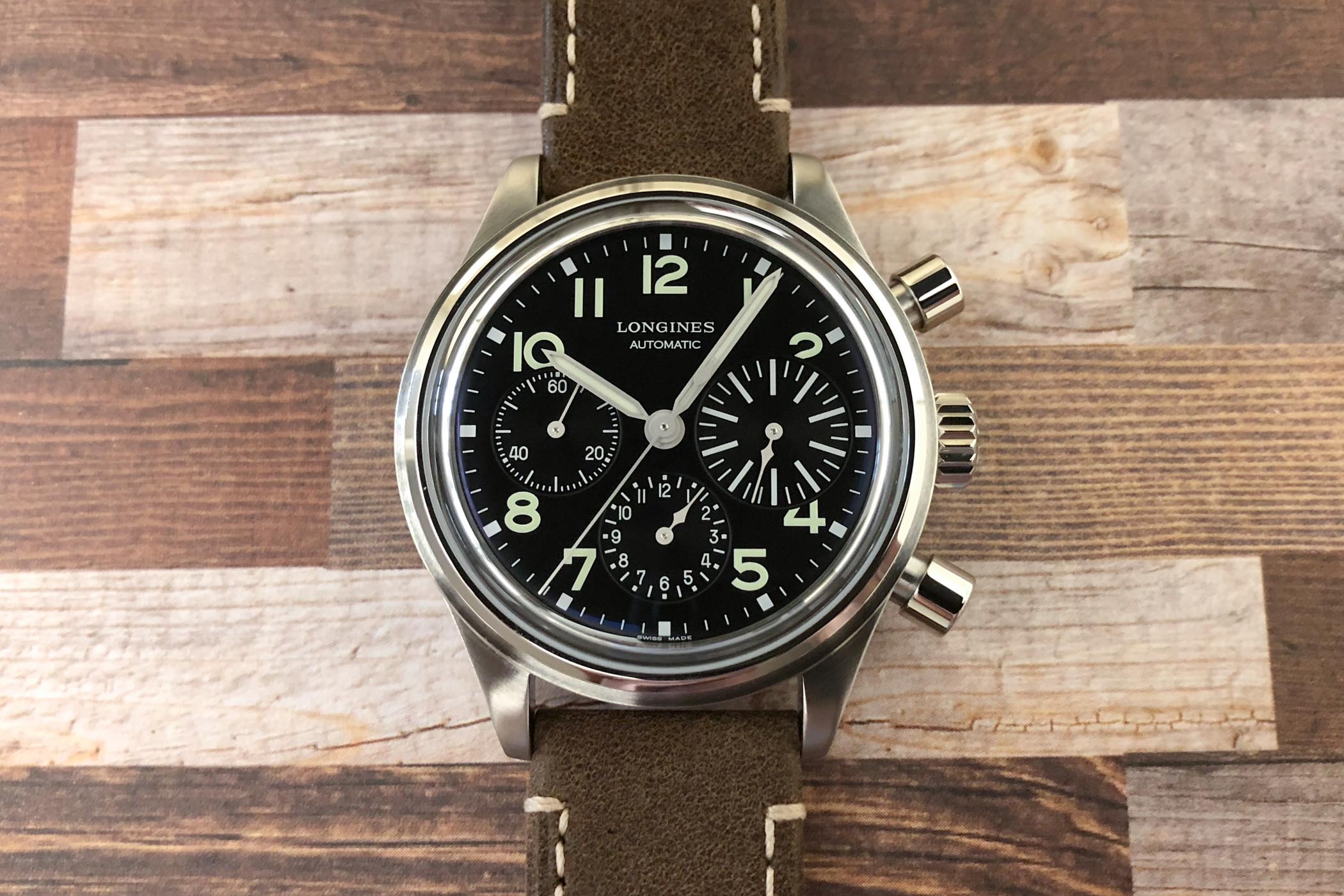 Fast forward to 2017 and the Basel watch fair and Longines presented its Heritage-based Avigation BigEye. Typically, a robust, military-inspired pilot’s chronograph with tri-counter layout, classic luminous Arabic numerals and, the star of the show, an oversized minute counter providing instant legibility on the indication.

Design-wise and in terms of specifications, there are no major updates to mention here. Basically, the elements that made the success of the stainless edition of the Avigation BigEye have been kept in this new edition. As such, we find back the same 41mm diameter, an approximate height of 14.5mm and a 20mm lug width. The case has a typical military shape, with flat coin-edge bezel and oversized pushers and crown, making sure that it can be used with gloves. The case has a robust shape and isn’t the smallest of the collection, however, the lugs are rather short. It is topped by a box-shaped sapphire crystal and water-resistance is rated at 30 metres. 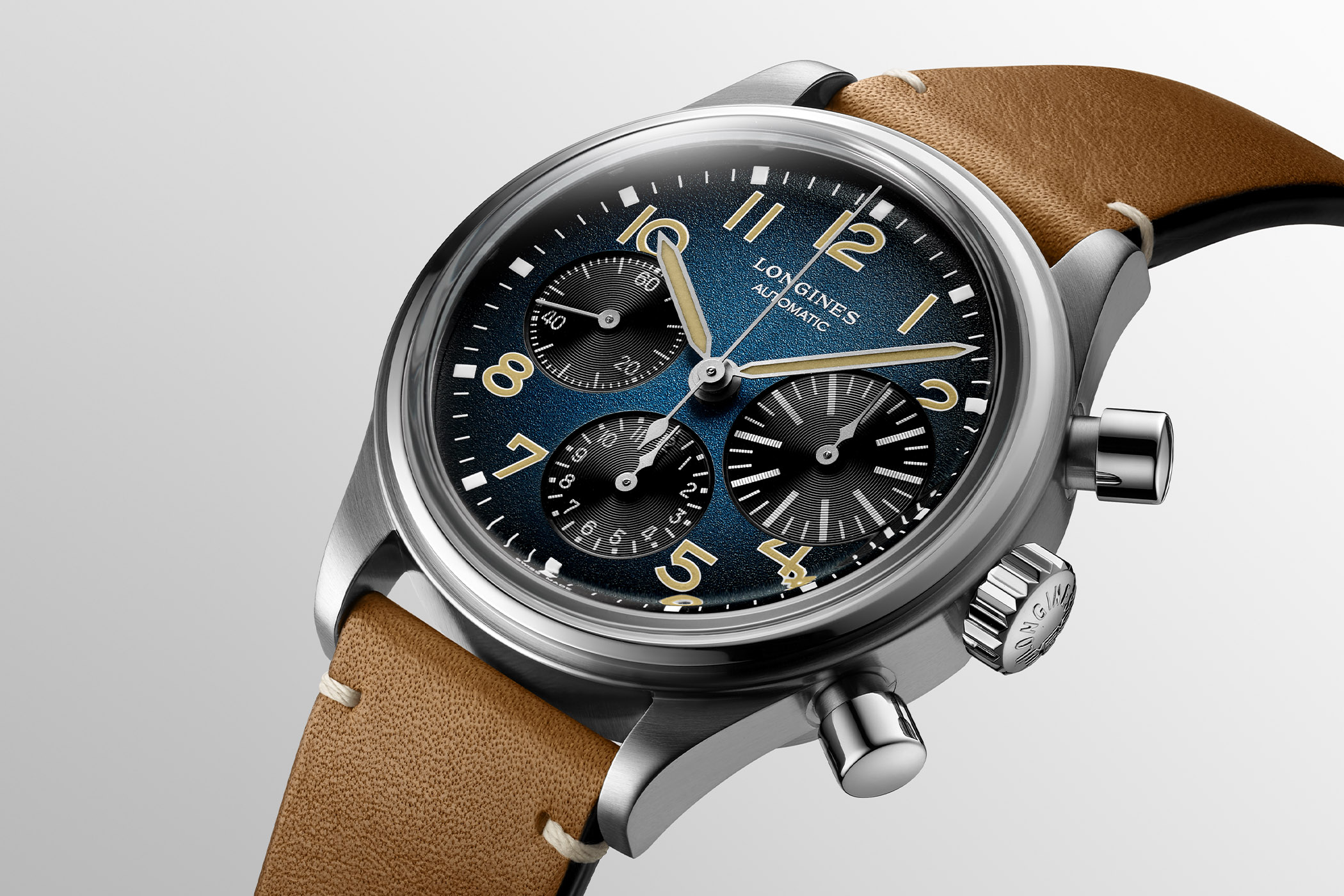 What’s new, however, is the material used to make the case. Still featuring a combination of brushed surfaces and polished accents, the Longines Avigation BigEye is now also available in grade 5 titanium. Being a fairly imposing watch, the use of lightweight titanium will certainly increase the comfort and, for adventurous wearers, it will also be more resistant to scratches. The caseback, while also made of titanium, retain the same engravings with an old-school plane. 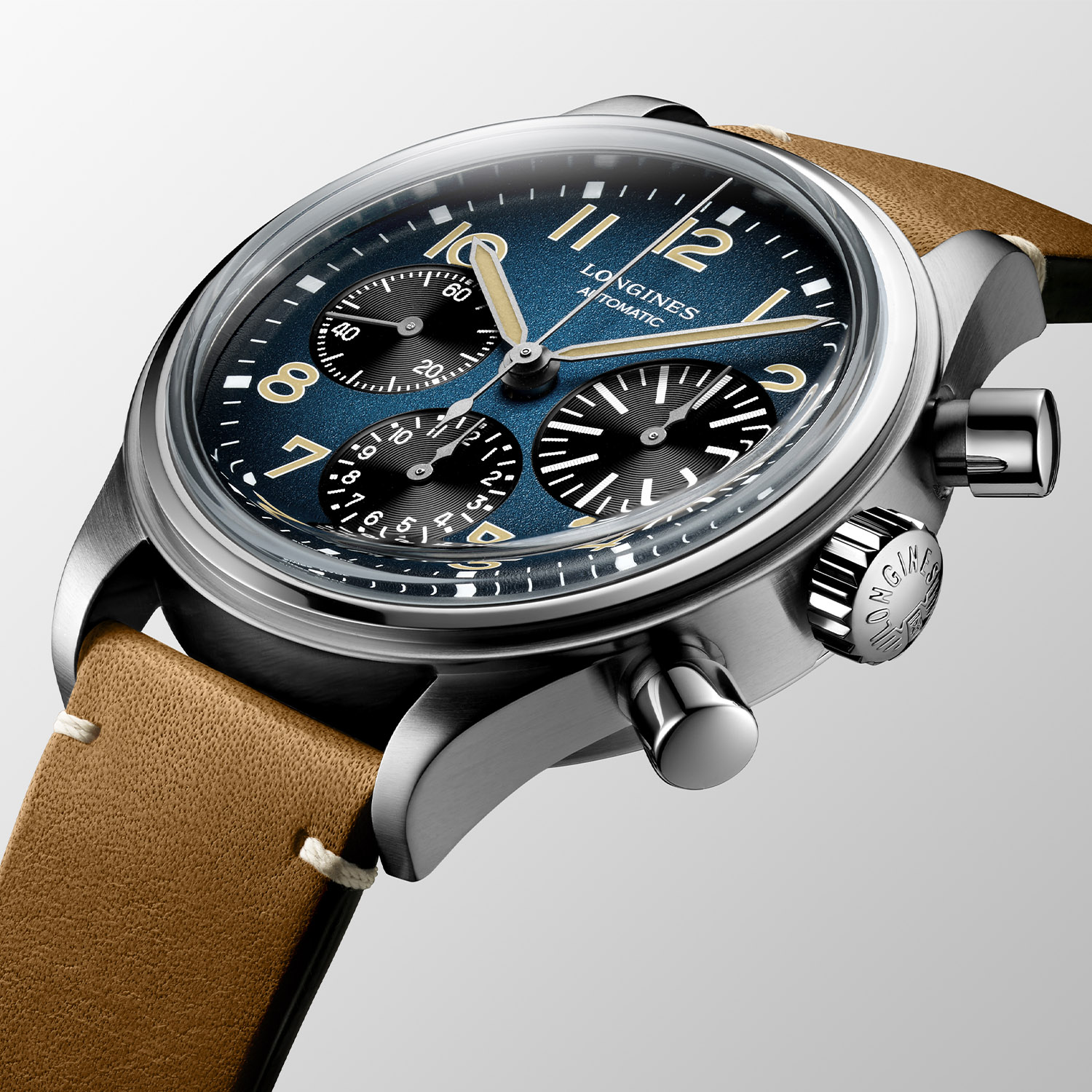 The most important update on this new Longines Avigation BigEye Titanium concerns the dial. Here, the brand frees itself from historical accuracy and brings a far bolder, but also rather attractive blue dial with gradient effect. Indeed, not only the surface now has a granular texture but the colour also darkens towards the periphery of the dial. The sub-counters are still executed in black with a concentric pattern. The sandblasted hands as well as the large Arabic numerals are all largely filled with luminous material, here coloured in an intense cream colour for a stronger vintage effect. 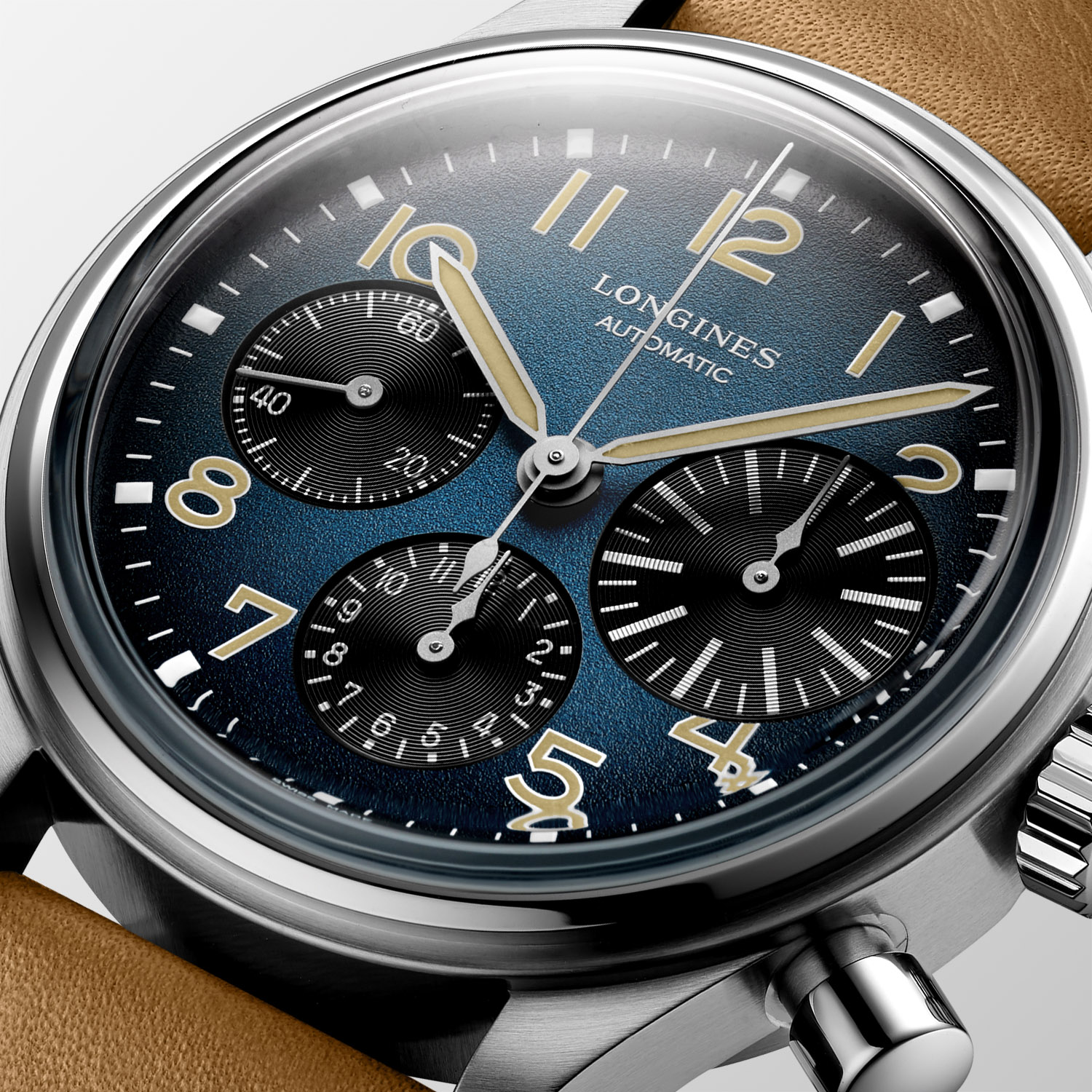 Under the screwed caseback is a well-known movement, the Calibre L688. Also named ETA A08.L01, it is a heavily modified Valjoux architecture that now features a column wheel for smoother and more accurate operation of the pushers. This rather noble movement is also providing multiple upgrades and modern features, such as a longer power reserve of 54 hours. Its escapement, classically beating at 4Hz, is also equipped with a silicon balance-spring for enhanced resistance to magnetic fields.

The titanium Avigation BigEye is worn on a natural brown smooth leather strap with a titanium pin buckle, complementing the vintage look of the watch. 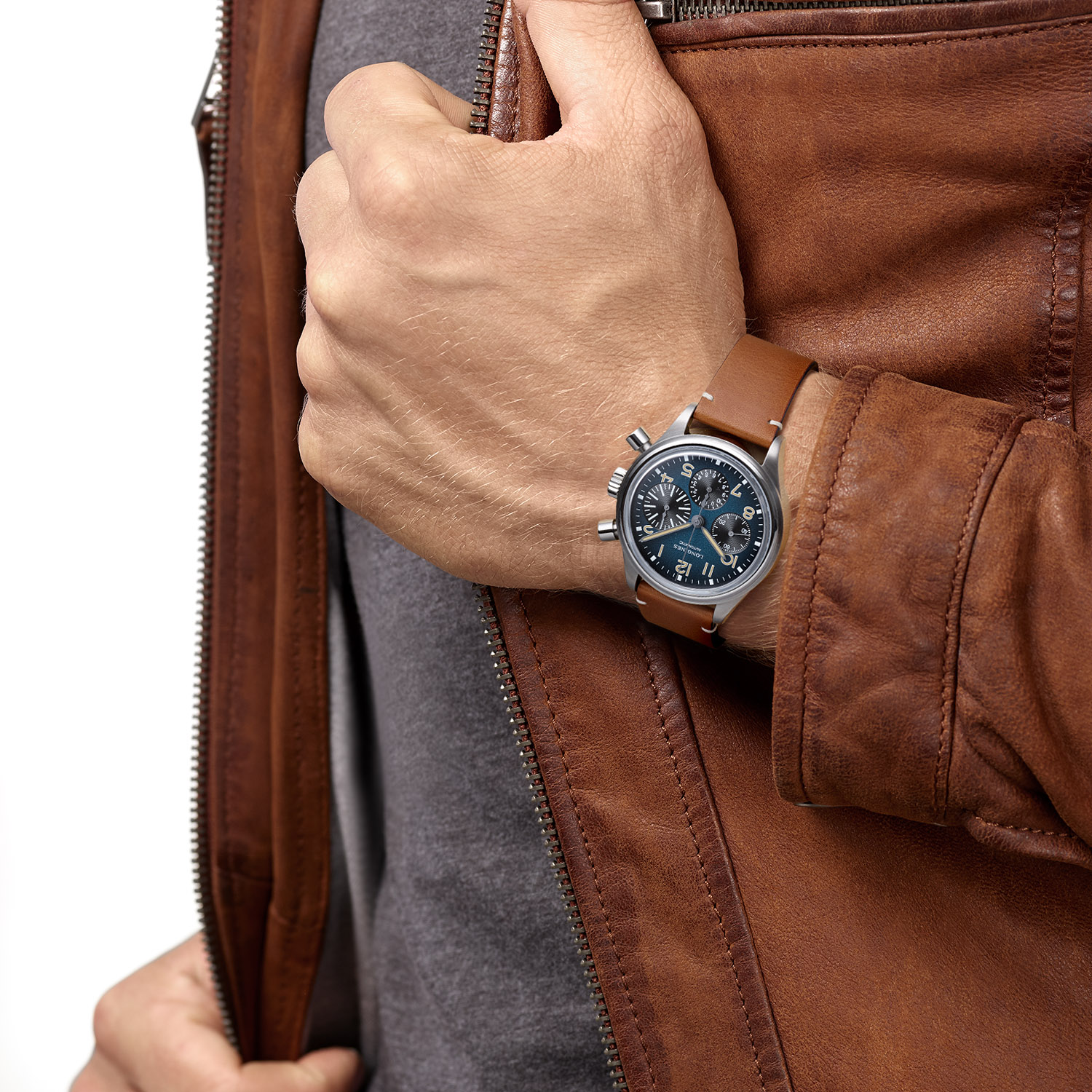 The Longines Avigation BigEye Titanium Blue Dial (ref. L2.816.1.93.2) is launched as part of the permanent collection, alongside the steel model. It is now available from the brand’s online boutique and from retailers. It is priced at EUR 3,230 or CHF 3,200. It comes with a 5-year warranty. More details and orders at www.longines.com.