One of the most important brands when it comes to pilot’s chronographs, Hanhart has recently been offering several highly attractive models based on the hand-wound 417 ES concept, including a 42mm version, a compact 39mm edition and some bronze models. It’s time now for the German brand to refocus on the classics, by updating two of its most emblematic models, namely the Pioneer MKI and MKII. Inspired by the brand’s first pilot’s chronographs and equipped with original pushers, they now come back in a reversed panda style. 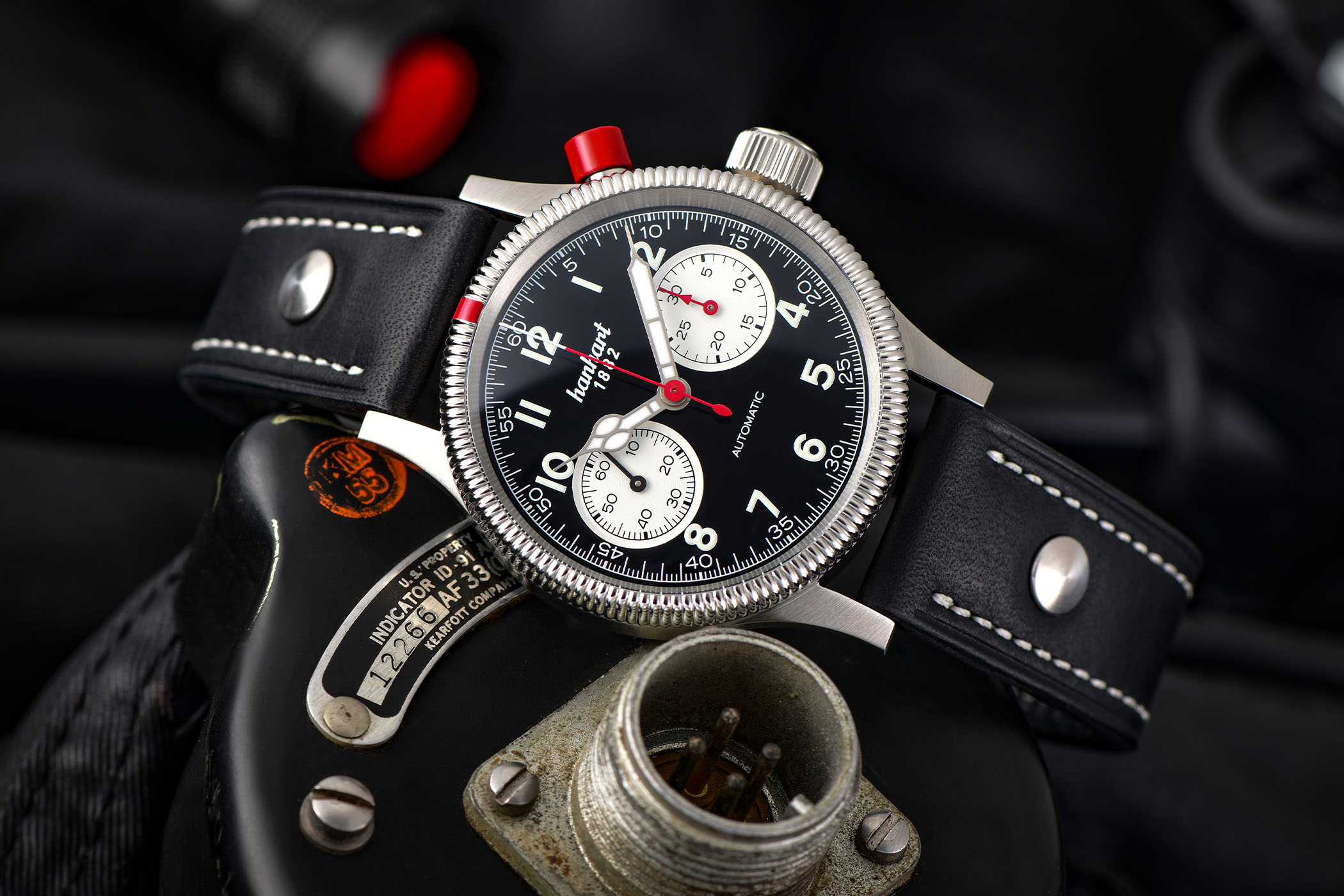 If the 417 ES has been the centre of attention recently, we should not forget about the classics, the Hanhart Pioneer MKI and MKII, which have been in the collection for many years and remain highly attractive models. The 417 ES can be seen as the most faithful re-edition of a historic mid-1950s pilot’s chronograph. It’s cool, accessible, hand-wound, can be compact and has a lot of retro appeal. The Pioneer MKI and MKII are slightly different in their execution. Based on the design of the brand’s first pilot’s chronograph, the late 1930s Calibre 40 watches, these are slightly more modern and equipped with automatic movements. Design-wise, however, there’s nothing contemporary here, just pure historic coolness. 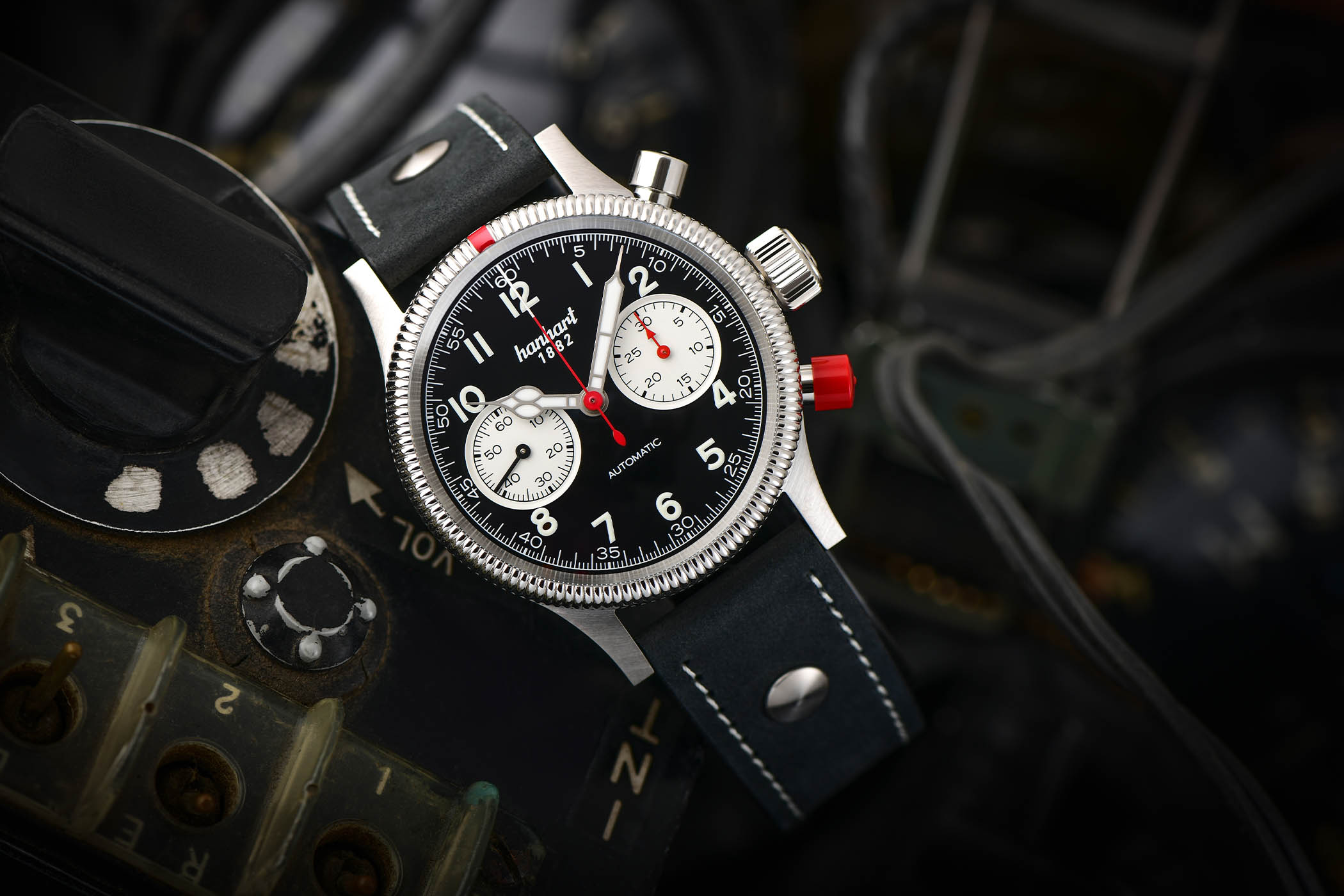 This doesn’t mean the brand can add a bit of originality. For now, the Hanhart Pioneer MKI and Pioneer MKII have been available with black or off-white dials, with matching sub-counters. The whole idea of these new editions, dubbed Reverse Panda, is to offer some contrast with a black base dial and white sub-counters. It certainly doesn’t reinvent the models entirely but adds a bit of dynamism and lightness to the design.

Both watches are almost identical, with only one major difference to be spotted – more on that later. This means a reasonably-sized stainless steel case of 40mm in diameter, with a respectable height of 15mm (the automatic chronograph movement is somehow responsible here…) The case is finished with satin and polished surfaces and comes with thin, straight lugs, with an overall instrumental, no-nonsense feel. The emblematic continuously rotatable fluted bezel with red marking is, of course, included here. The case is equipped with an anti-reflective sapphire crystal, a screwed caseback, an oversized crown and has a comfortable 100m water-resistance. 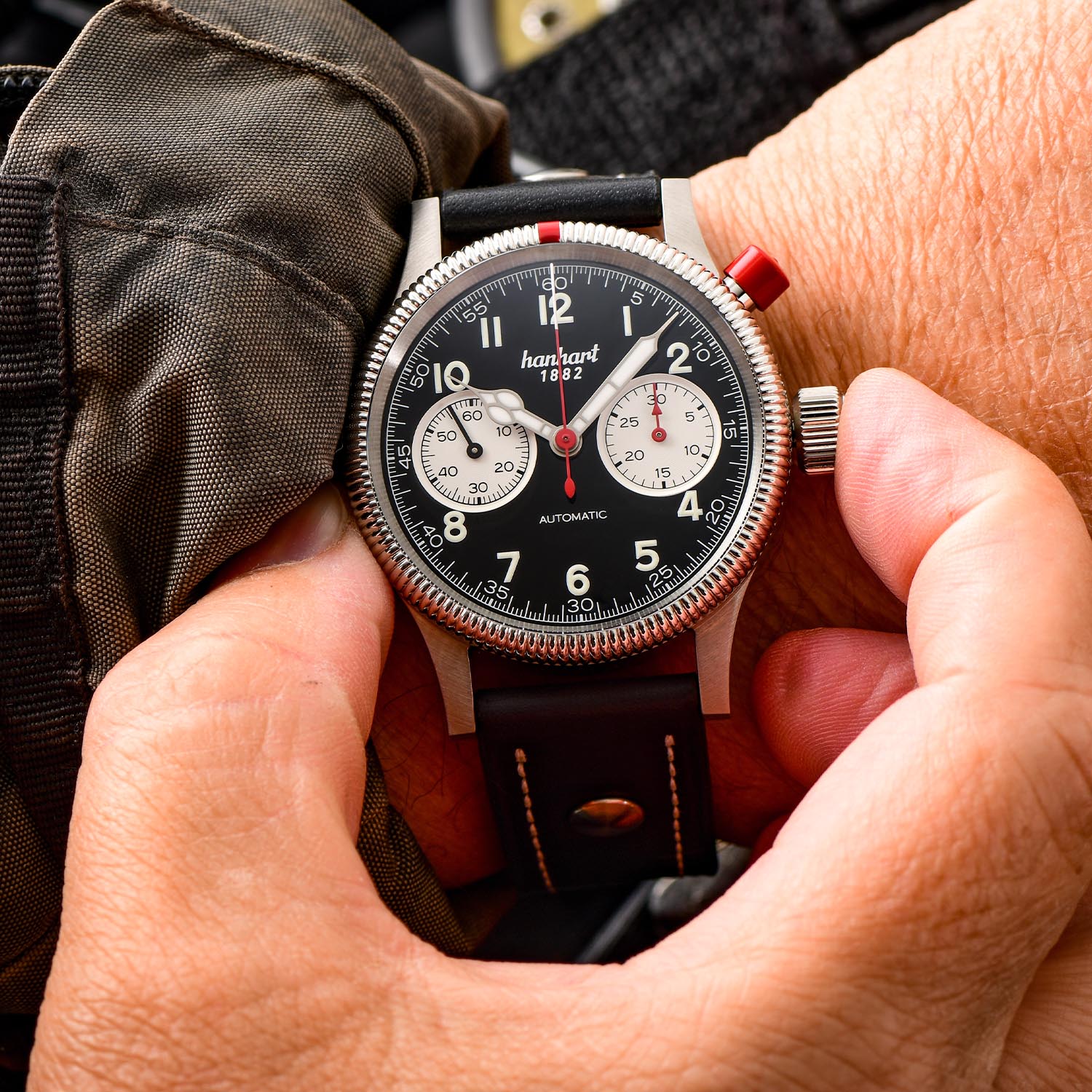 What separates the MKI from the MKII is the configuration of the pushers. The MKI is modelled after the Calibre 40 and thus features a monopusher layout, with a single button to start, stop and reset the chronograph. It is, of course, coated in red. The Pioneer MKII is more classic at first sight, with its dual-pusher configuration, however, you’ll see that there’s some historic relevance here too, with an asymmetrical construction – the top pusher being further away from the crown. This also means that the MKI has a slightly modified movement in order to become a monopusher – something that is done in-house by Hanhart. 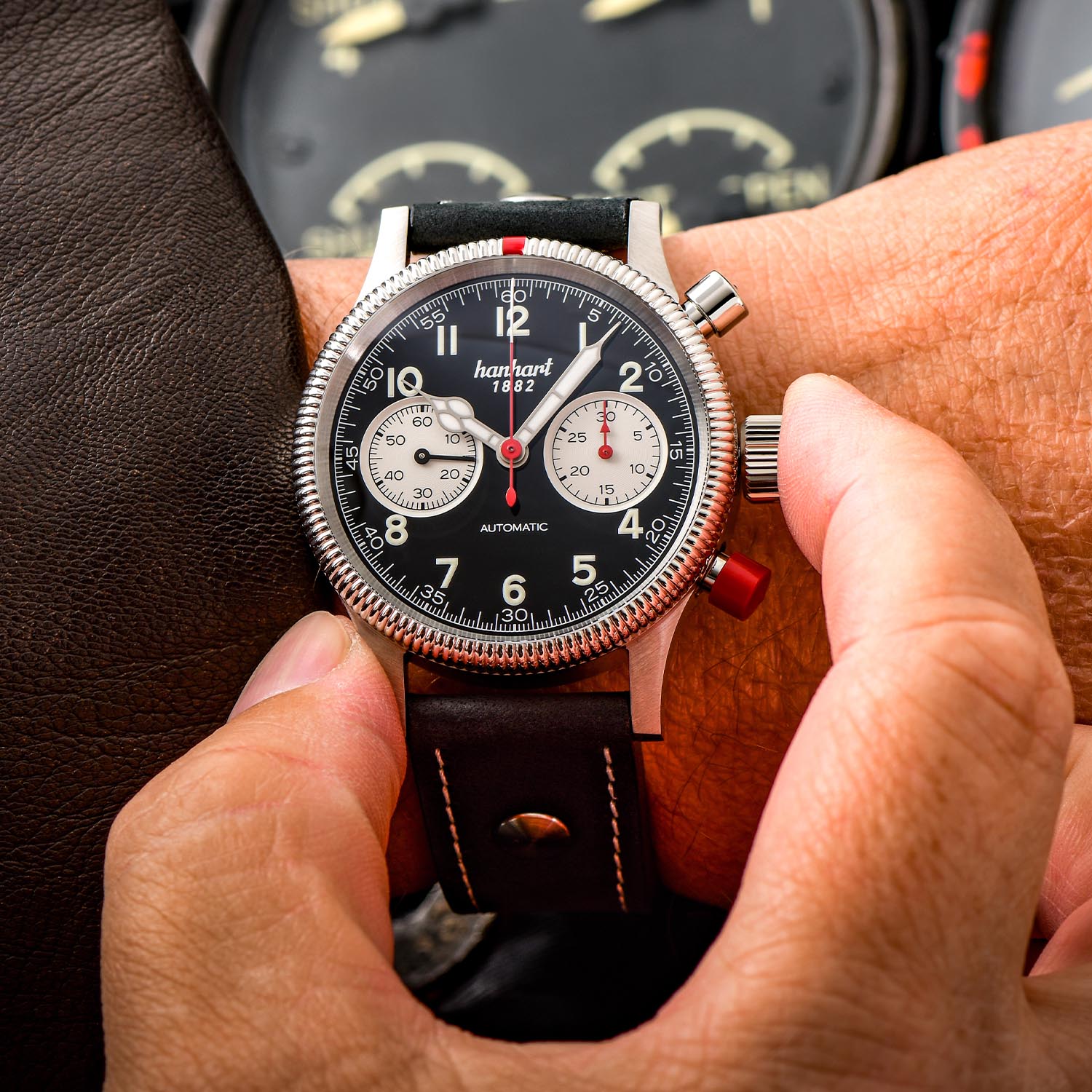 Under the screwed caseback is otherwise a tried-and-tested movement, an ETA 7753. This automatic cam-lever chronograph calibre here beats at 4Hz and stores up to 42 hours of power reserve. It displays the time and the chronograph has a central seconds and a 30-minute counter. 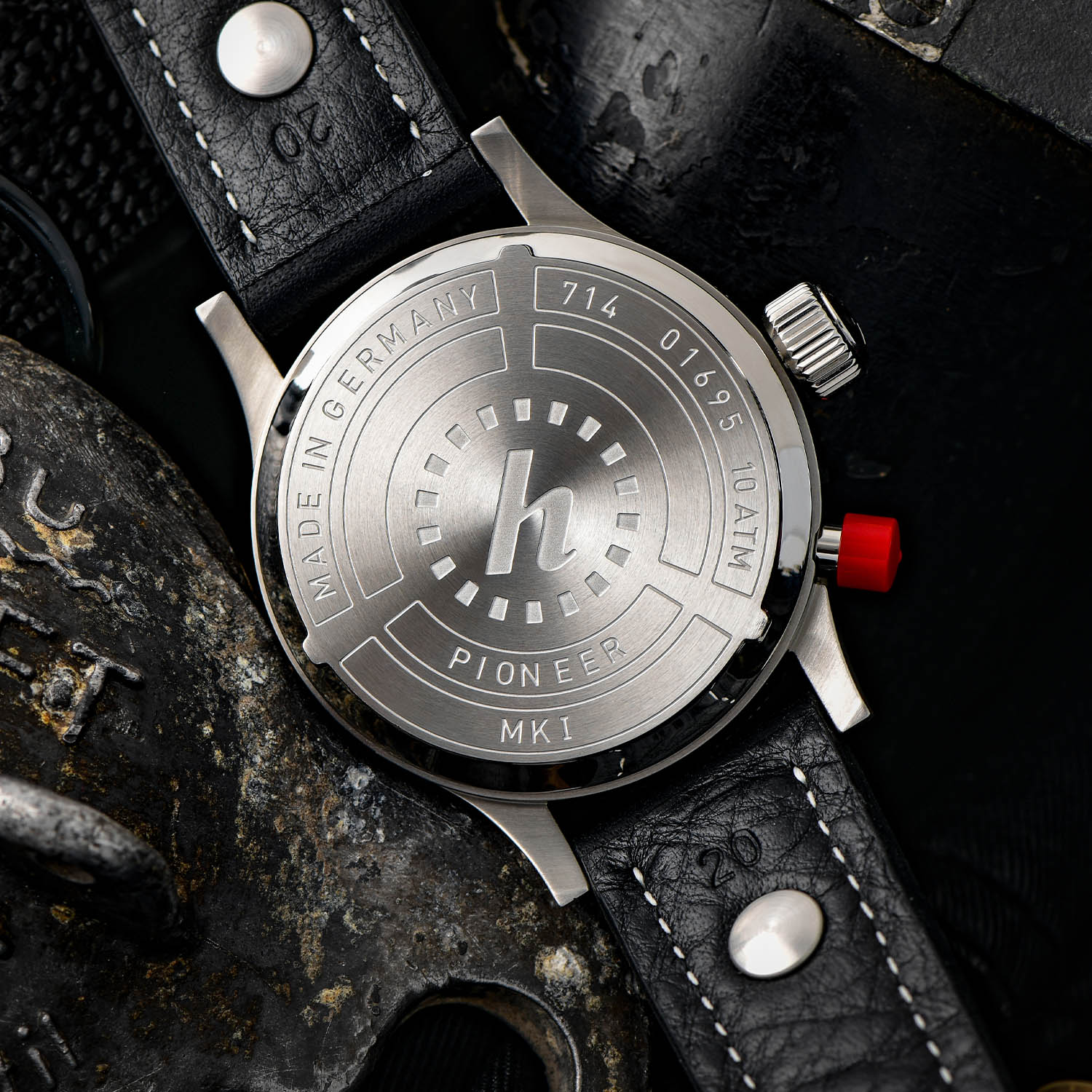 As for the dial, in addition to the black-and-white style, the Hanhart Pioneer MKI and MKII show great attention to detail, with hands that are bent at their tip to prevent parallax errors, or a clever use of colours, with the red hands corresponding to the chronograph functions. The large cathedral hands and the Arabic numerals are coated in Super-LumiNova.

The Hanhart Pioneer MKI and Pioneer MKII Reverse Panda are worn on a 20mm calfskin strap with pilot’s rivets. Optional leather straps in different colours and a steel bracelet are also available from the brand. Both watches are released as part of the permanent collection, are not limited in production and are available now from the brand and retailers. Prices are again competitive considering the historical background and execution, the Pioneer MKII (double pusher) being priced at EUR 1,990 and the Pioneer MKI (single pusher) at EUR 2,090.

More details and orders at www.hanhart.com.