Kill your darlings is what they say and around the same time last year, Patek Philippe killed the 5711 and Audemars Piguet killed the über-popular 15202. Within a few weeks, the two most popular watches on planet Earth were discontinued and that caused some turbulence in the world of watches. AP’s Royal Oak Extra-Thin a.k.a. ‘Jumbo’ is now being replaced by the new reference 16202. Has the Jumbo changed a lot? Well, yes and no. It’s equipped with a new movement, but more importantly, the 16202 still looks very much like a Royal Oak Jumbo. Let’s take a closer look at the all-new stainless steel Audemars Piguet Royal Oak Jumbo Extra-Thin 16202ST. 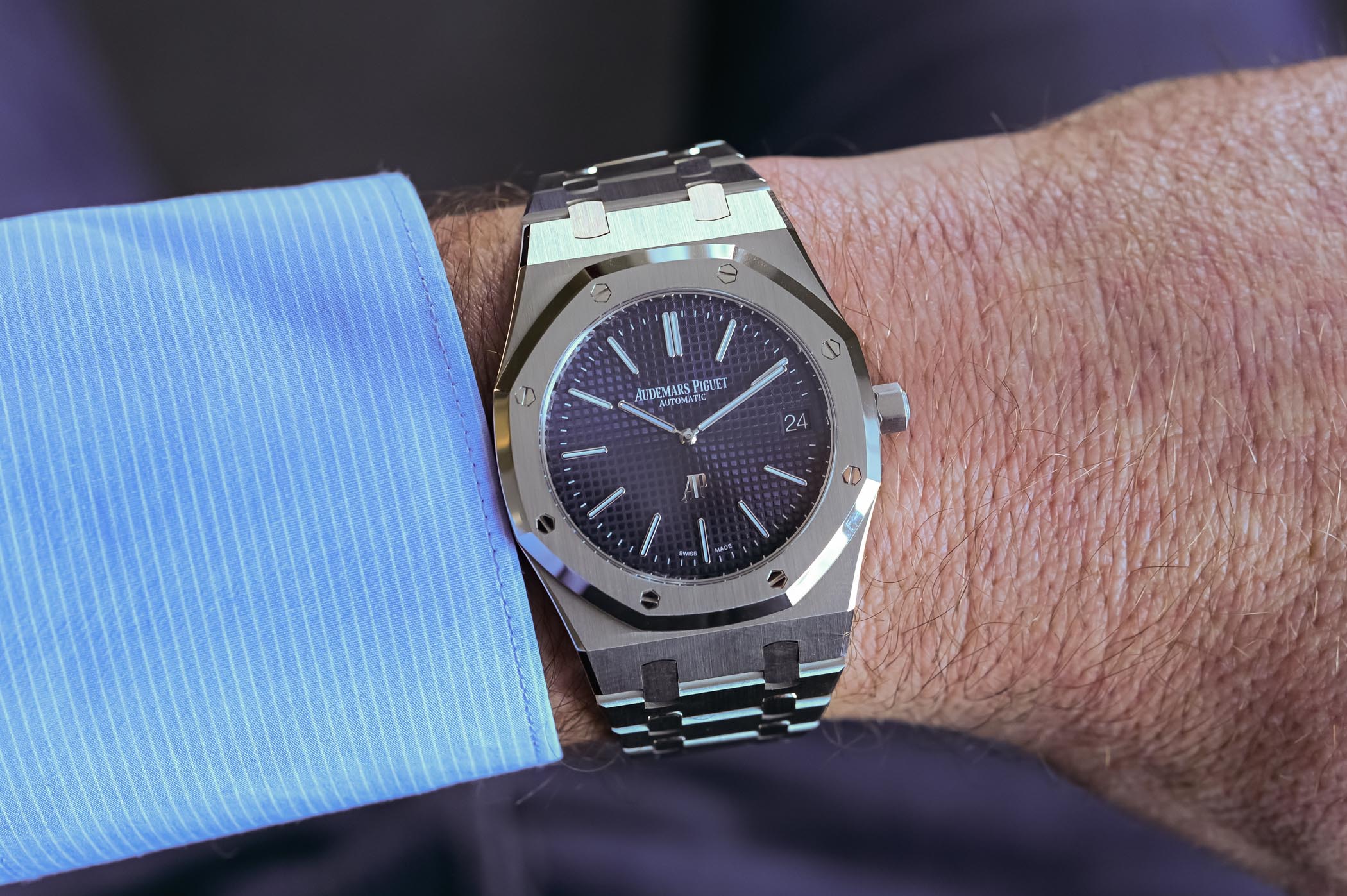 As said, it has changed a LOT.

For the first time since 1972, the Royal Oak Jumbo Extra-Thin will be equipped with a different movement, and that’s actually pretty big news! So far, the RO Jumbo has been equipped with the Jaeger-LeCoultre cal. 920 ébauche and Audemars Piguet named it calibre 2121 (for the version with date, while the version without date was named calibre 2120.) The other two brands of the “Holy Trinity”, Patek Philippe and Vacheron Constantin, also used this movement albeit they baptized it with different calibre numbers. Audemars Piguet also used this movement in almost every (self-winding) perpetual calendar (except for the ref. 25800.) For fifty years, it has been a great movement for the Royal Oak Jumbo. Reliable and sturdy enough despite its thinness. But it’s time for something new… 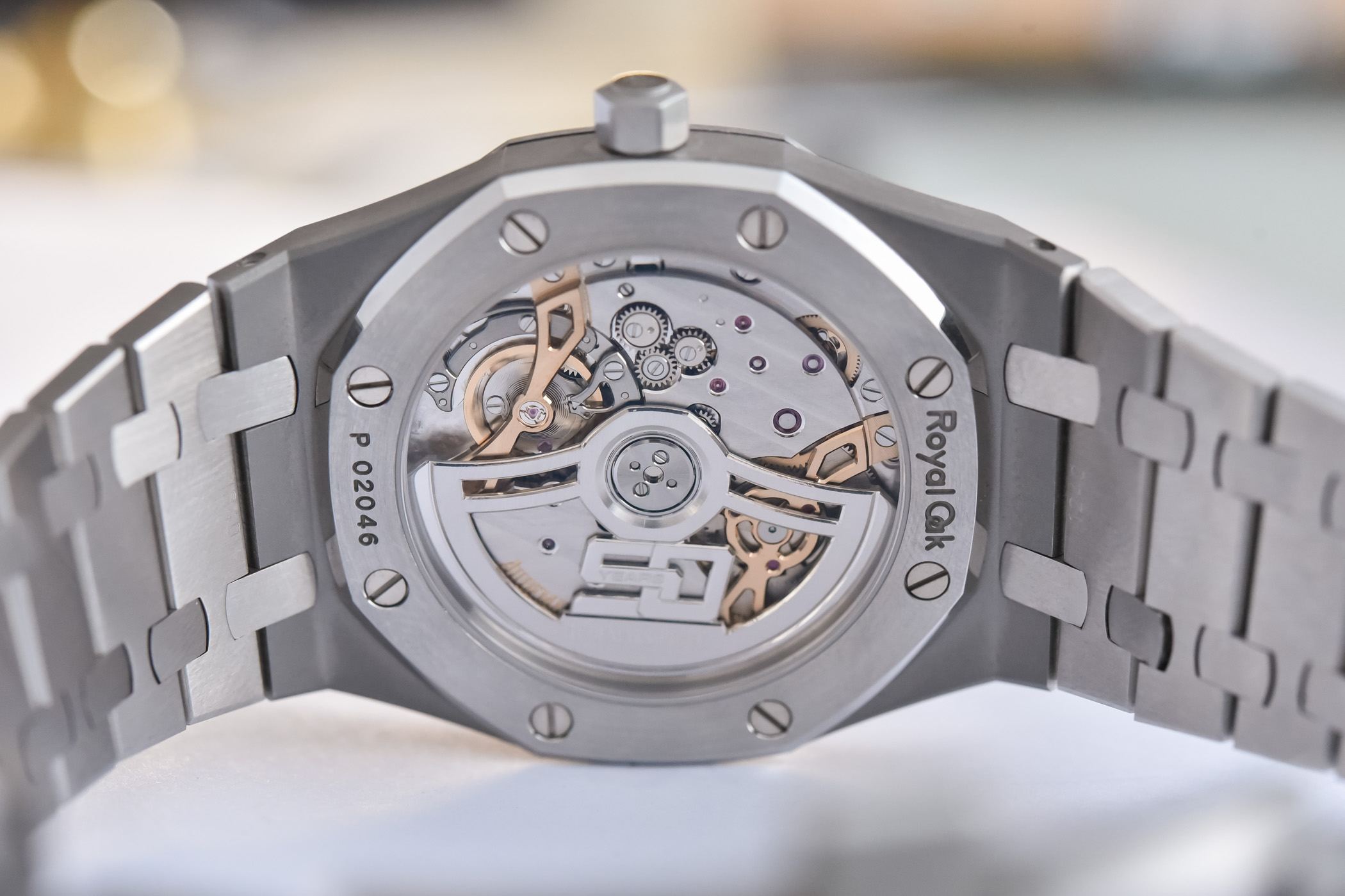 And that “something new” comes in the shape of a new extra-thin movement. The new Royal Oak Jumbo Extra-Thin 16202ST is not equipped with just another movement. No, it now comes with a brand new, in-house developed and manufactured movement named calibre 7121. This calibre offers a longer power reserve, an increased frequency and comes with a quick-set date. And these are useful improvements!

The increased power reserve is achieved by a longer mainspring, and that’s just really pleasant as the 40h autonomy when fully wound might have been a tad outdated these days. The 55h of power reserve that the new calibre delivers stretches the autonomy up, to more than 2 days. It also allows for AP to get a more stable rate of a longer period and thus improving its chronometric performances. 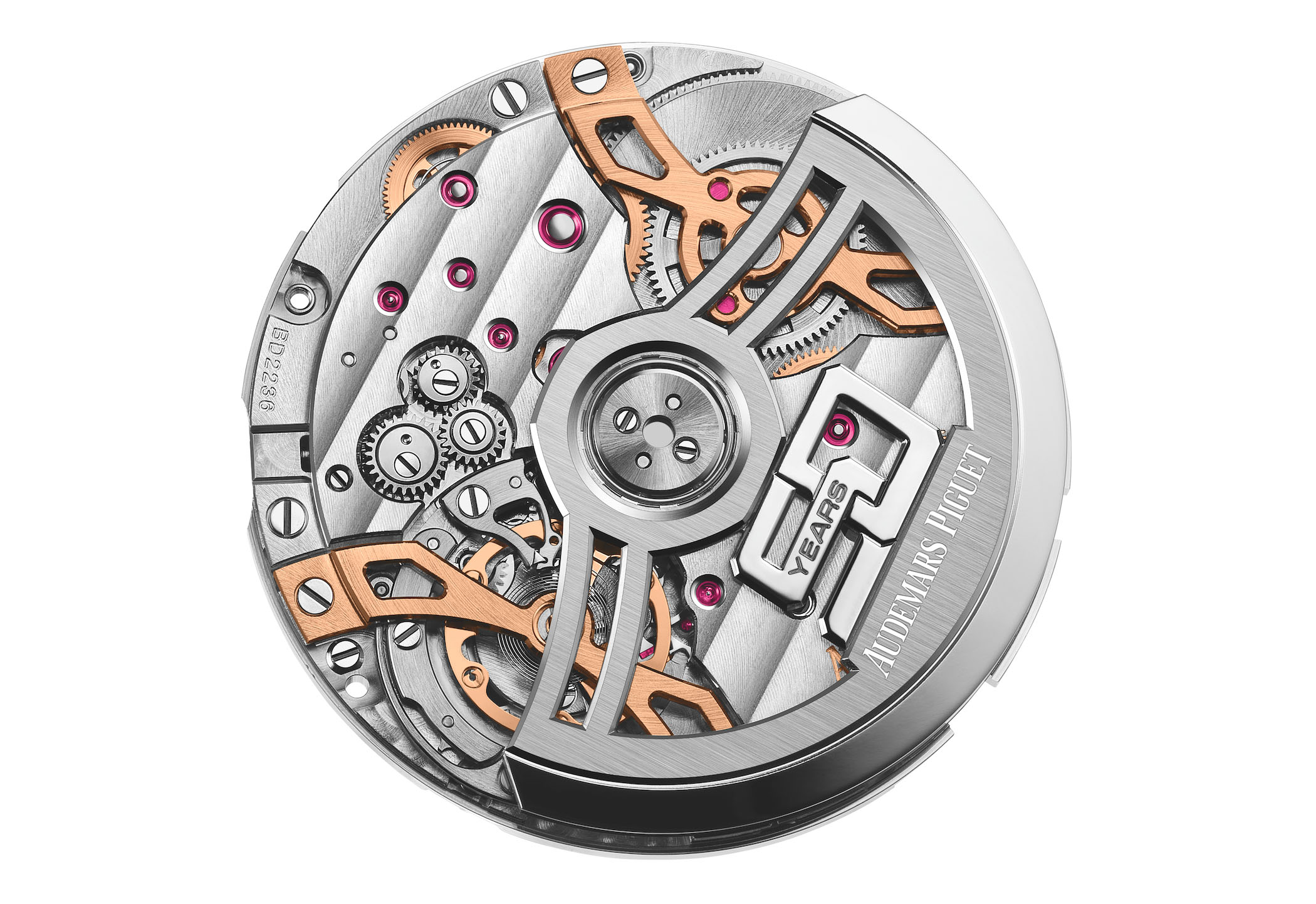 At least as important is the increased frequency. Going from 19,800 vibrations/hour to a modern 4Hz (28,800 vibrations/hour) is another opportunity for AP’s watchmakers to regulate the watch to a higher precision. And the now available quick-set date is probably the best improvement altogether.

The new calibre 7121 is a bit larger and thicker than its predecessor, but this has no impact on the case size of the new Royal Oak ‘Jumbo’. The diameter is now 29.6mm (over 28.0mm for cal. 2121) and thickness increased to 3.2mm (versus 3.05mm for cal. 2121.) Another important improvement on the movement side is that the central rotor is mounted on ball bearings, allowing for less wear and tear. The balance wheel in the new movement is fitted with inertia blocks that have been directly inserted within the balance wheel to avoid unnecessary friction. And last but not least, the new movement is equipped with a patented extra-thin low-energy date-setting mechanism. 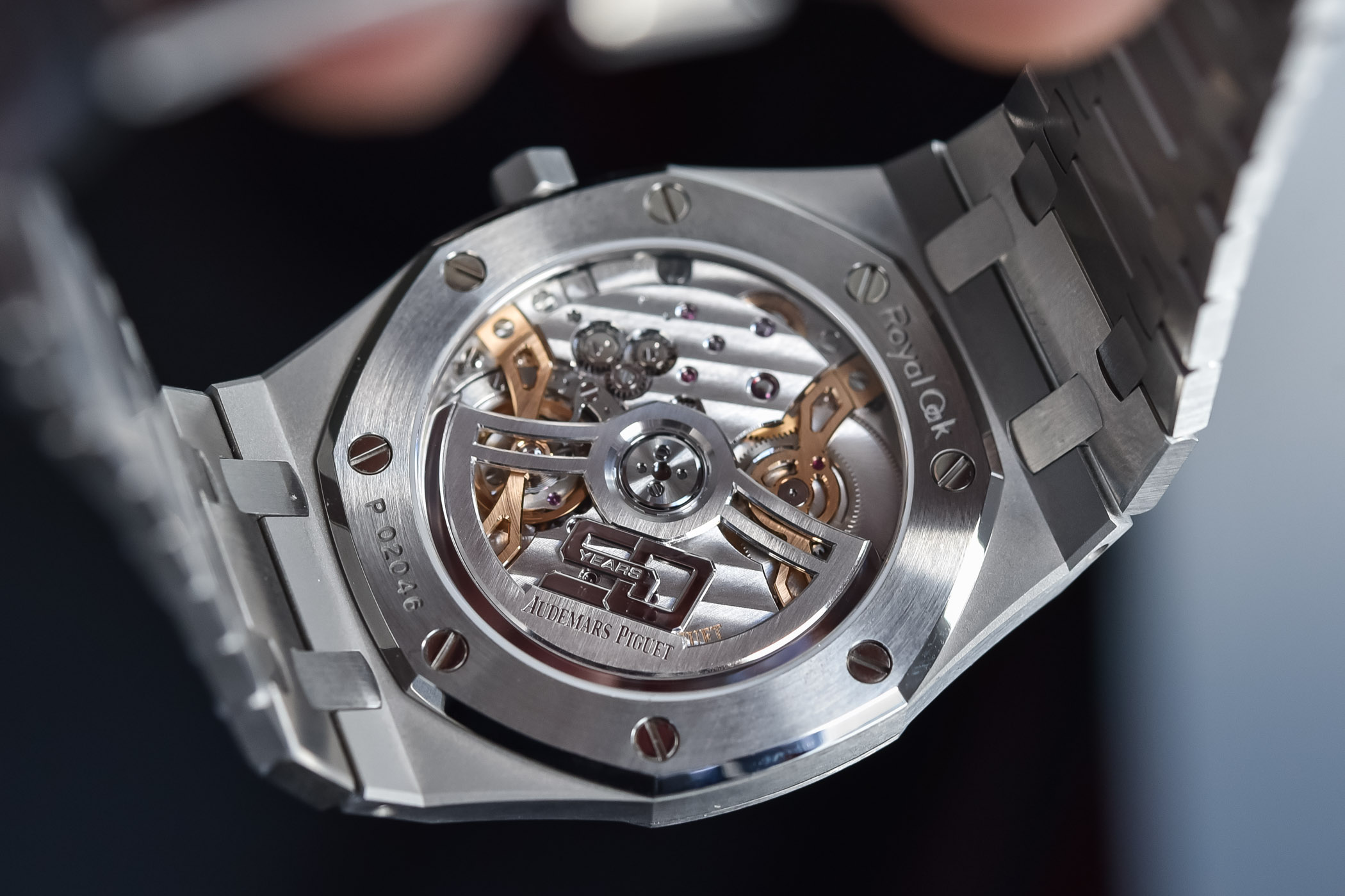 And finally… the rotor will be adorned with a styled “50 years” logo. But this will only be featured on the watches manufactured this year! As of 2023, the rotor on all Royal Oaks will not feature that cool “50 years” logo anymore!

The lineage in reference numbers

The reference number 16202ST seems like a logical successor to the previous RO Jumbo ref. 15202ST. However, the lineage of reference numbers for the Royal Oak Jumbo didn’t always evolve as logical as this time.

Originally introduced in 1972 as the reference 5402ST, it disappeared from the catalogue for some ten years until it was relaunched, in 1992, by the references 14802ST (Jubilee edition for the 20th anniversary) and 15002ST (regular model.) While the 14802ST added a see-through case-back, and subsequently a slightly thicker case, the reference 15002ST remained pretty close to the original design and proportions of the ref. 5402ST.

Eight years later, in 2000, AP introduced the reference 15202 that would replace the other previous references. This watch featured again a see-through caseback, however, its dial featured the so-called Grande Tapisserie or big ‘cobble stone’ pattern (or Clous de Paris as it’s called in French.) In 2012, the 15202 was refreshed, mainly bringing back the smaller Petite Tapisserie pattern like on the original 5402ST. 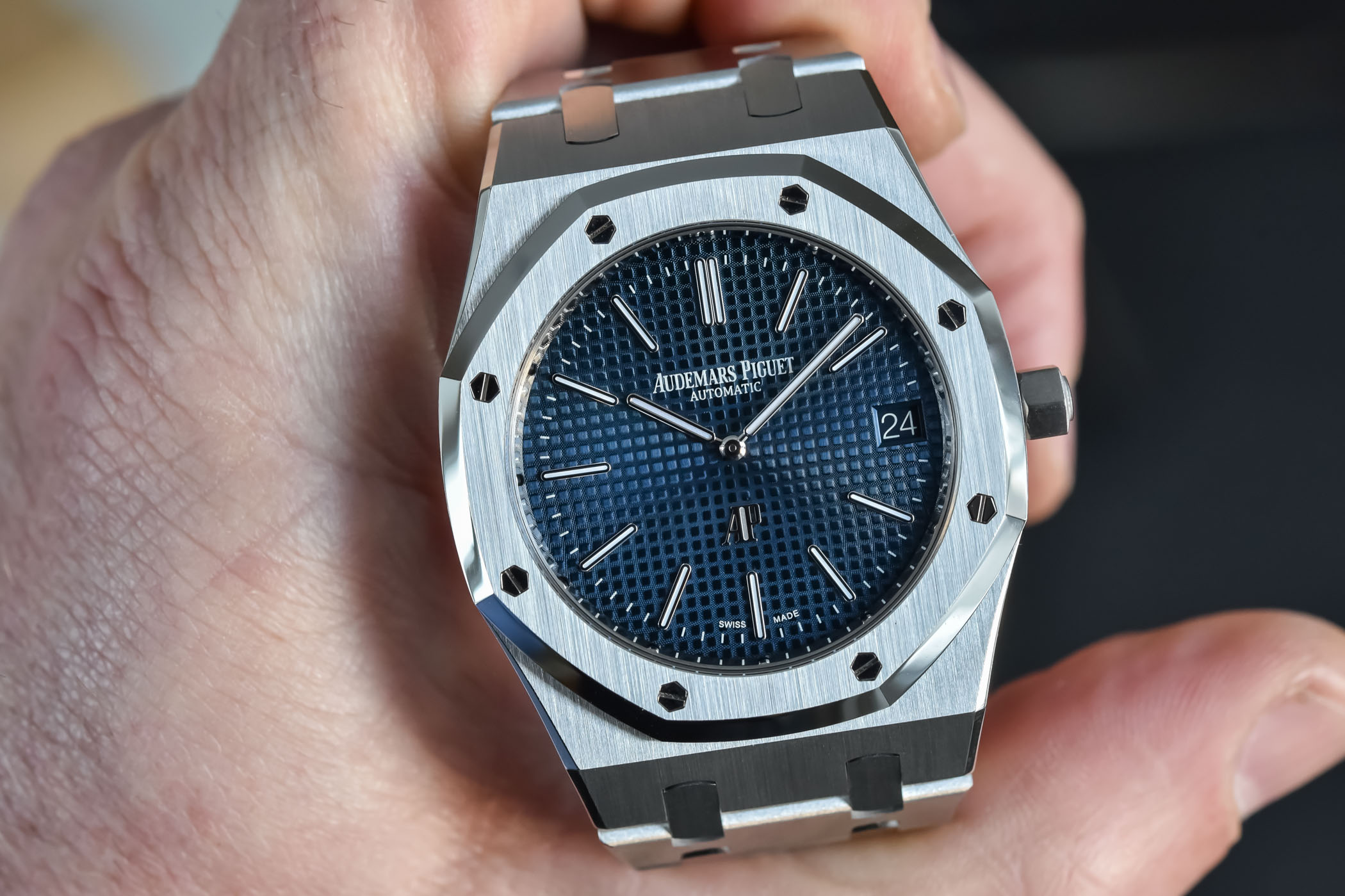 As said, it hasn’t changed much at all…

The most important of the new 16202ST is that it still looks very much like the 5402ST, the 14802ST, the 15002ST and the 15202ST… and that’s a good thing! While the engine inside changed, for the better, the looks and proportions of the watch remain pretty much identical. The diameter still measures 39mm and its thickness is still 8.1mm. The bracelet remains the same and is still hand-finished with satin-brushing and polished chamfers. The bracelet is closed with a double folding clasp, identical to the one on reference 15202ST. In short, it’s almost entirely the same as the previous generation, at least for the external parts. 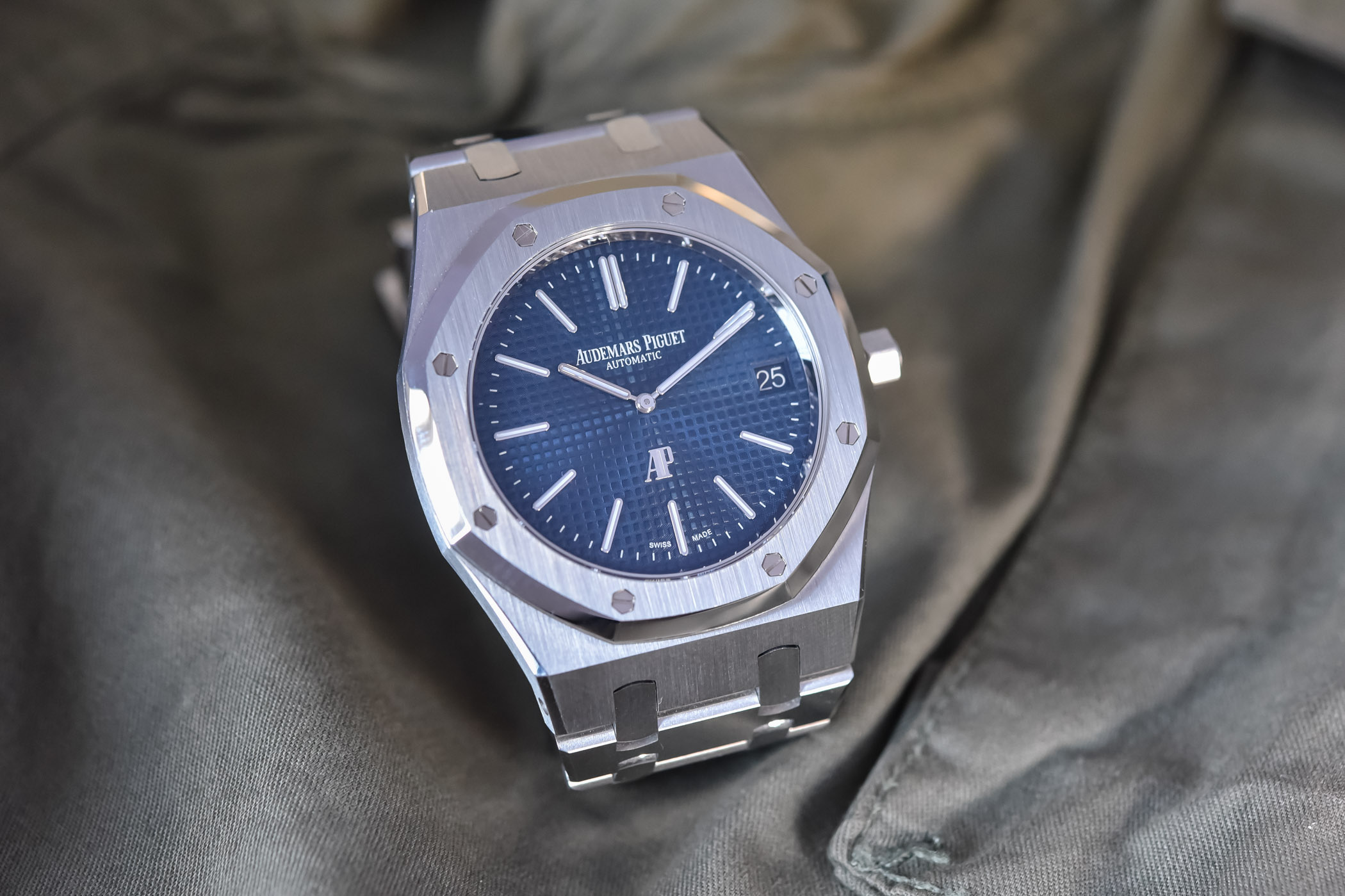 Other factors that did not change at all are the dial, the markers and the hands. The dial colour remains the same blue, which Audemars Piguet calls Bleu Nuit, Nuage 50 – which, translated to English gives “night blue, cloud 50”. Also, the hour markers, the minuterie (minute markers), the applied AP logo, the “Audemars Piguet automatic” printing and the date window are all the same. Although the latter moved a fraction of a millimetre towards the edge of the dial, but this is almost impossible to see… 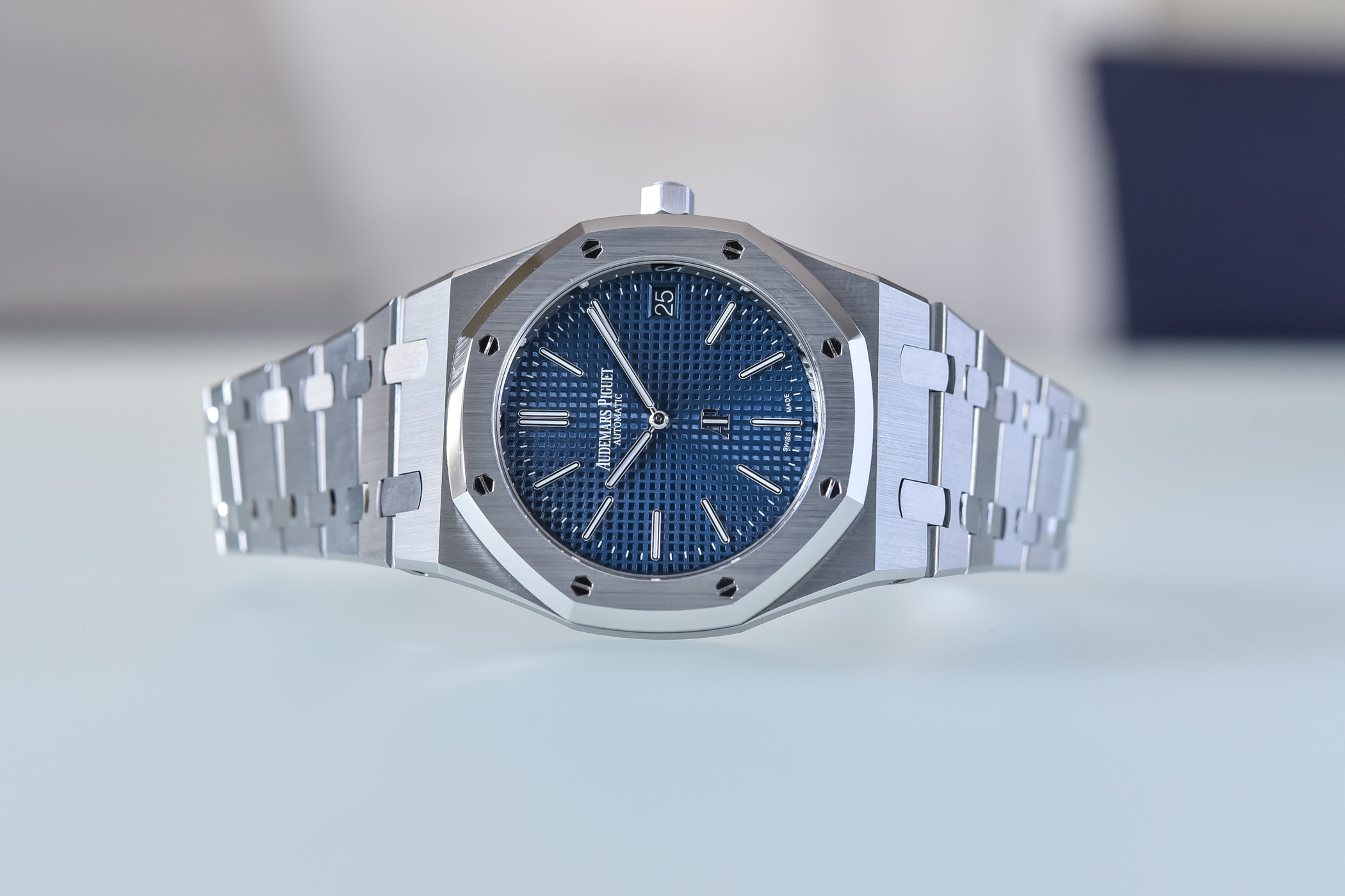 The Audemars Piguet Royal Oak Jumbo Extra-Thin 16202ST is released as part of the permanent collection. There are also 3 other 16202 models in precious metals released, but we’ll come back on this topic soon. The steel version reference 16202ST.OO.1240ST.01 will be available (well, if ever you can get one…) as of February 2022 and is priced at EUR 32,400 (incl. taxes). For more, please visit www.audemarspiguet.com.

And here’s a selection of photos, and of course don’t miss the video review on top of the article!