Wristwatches were essentially born during World War I as trench watches (or wristlets) for soldiers needing a hands-free solution. Fast forward to World War II and they were the dominant form of watches for both military and civilian use. Legendary military editions materialized like the Dirty Dozen and B-Uhr, and the Type A-11 stands out as one of the best American war watches produced by Waltham, Elgin and Bulova. They were commonly worn by pilots and paratroopers and there were many varieties, but all had a common set of specifications. Praesidus recently launched a contemporary yet faithful A-11 model with genuine D-Day Marston Mat dials, limited to 100 pieces. 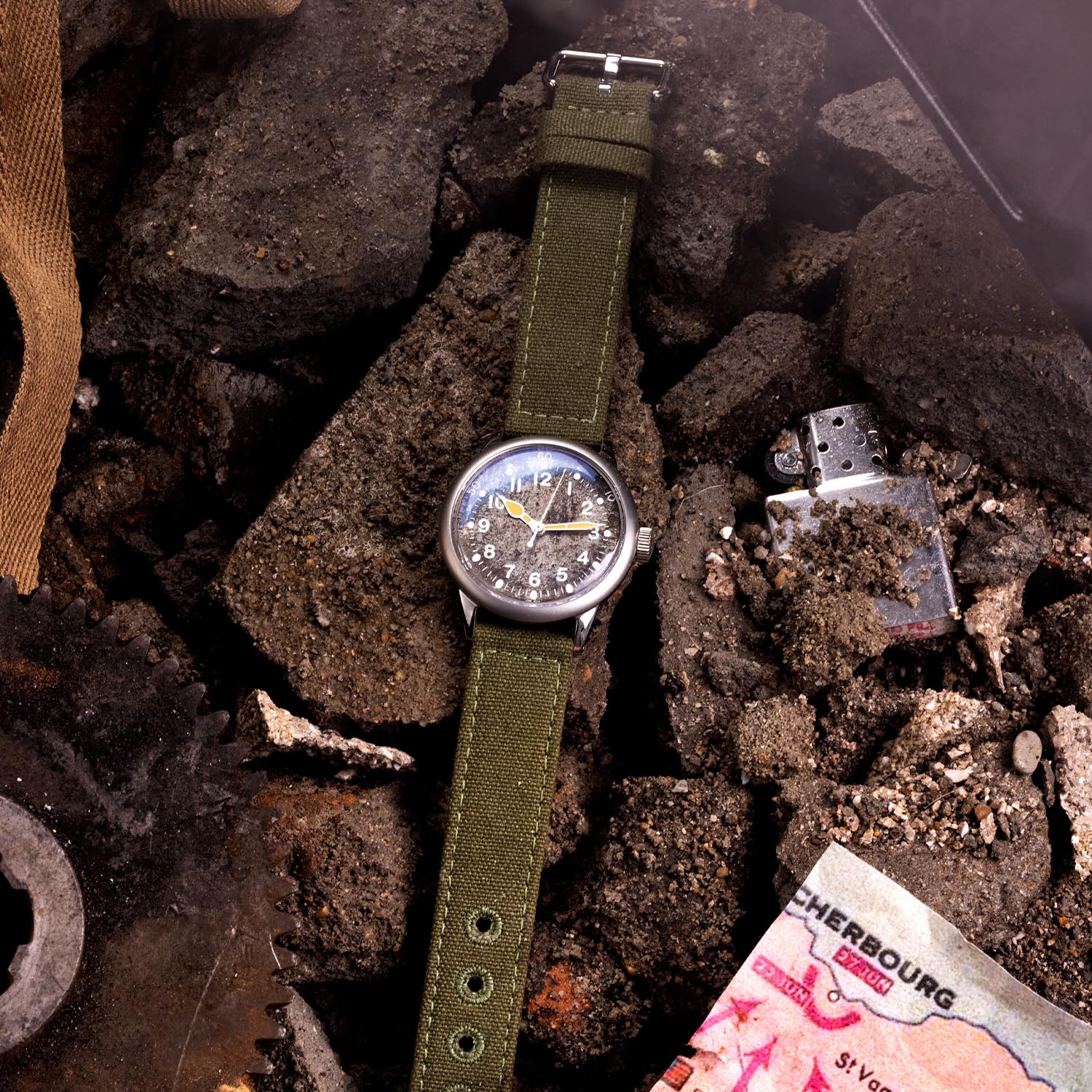 The military connection to the brand goes back to a friend and French photojournalist who was in Normandy for the 75th anniversary of D-Day in 2019. He met 97-year-old Tom Rice, a veteran of D-Day with the 501st Parachute Infantry Regiment of the 101st Airborne Division. His age didn’t stop him parachuting out of a C-47 to commemorate the occasion. During the War, Tom commanded his plane and was the first to jump, but his parachute failed to deploy due to a sudden, nearby explosion. Still latched to the plane, he eventually managed to release himself with an injured arm, losing his A-11 in the process. Praesidus specializes in A-11 collections today and Tom Rice soon became a brand ambassador, and there’s a Tom Rice Edition with two dial colours and several strap options.

The Type A-11 watches weren’t a specific model, but more of a focused family of watches for American and allied forces. They were produced with cases ranging from 32mm to 36mm, and a (minimum) 15-jewel movement with hacking seconds was an important standard to synchronize watches. Other requirements included dust, water and extreme temperature resistance, an accuracy of +/-30 seconds per day and a minimum 30-hour power reserve. However, due to the amount produced and number of manufacturers, there was a bit of leeway taken. Not all were dust or water-resistant, case designs varied and some had lume while others didn’t. Almost all had black dials with contrasting white indices and NATO-style straps, although some two-piece straps were used as well.

The Praesidus A-11 Marston Mat

Praesidus hasn’t simply reimagined the A-11 and sticks to the original formula as far as aesthetics and general specs. That said, there are modern upgrades such as a stainless steel case (originals were mostly nickel or silver), sapphire crystal and automatic Swiss movement. The round, bulbous sandblasted bezel flows into the case and oversized crown, the latter being important for quick winding back in the day. Unlike the typical 32mm diameter of war watches, this A-11 is 38mm in diameter and 12.5mm in height, maintaining a small(ish) size for a modern wrist. 32mm is tiny by today’s standard. There’s a period-correct solid case back and you won’t have to question water resistance with this one – it’s 100 meters. A double-domed AR sapphire crystal protects the dial, which is a world away from the original acrylic crystals. There are two 20mm strap options – green canvas or brown leather – and both come in the box. 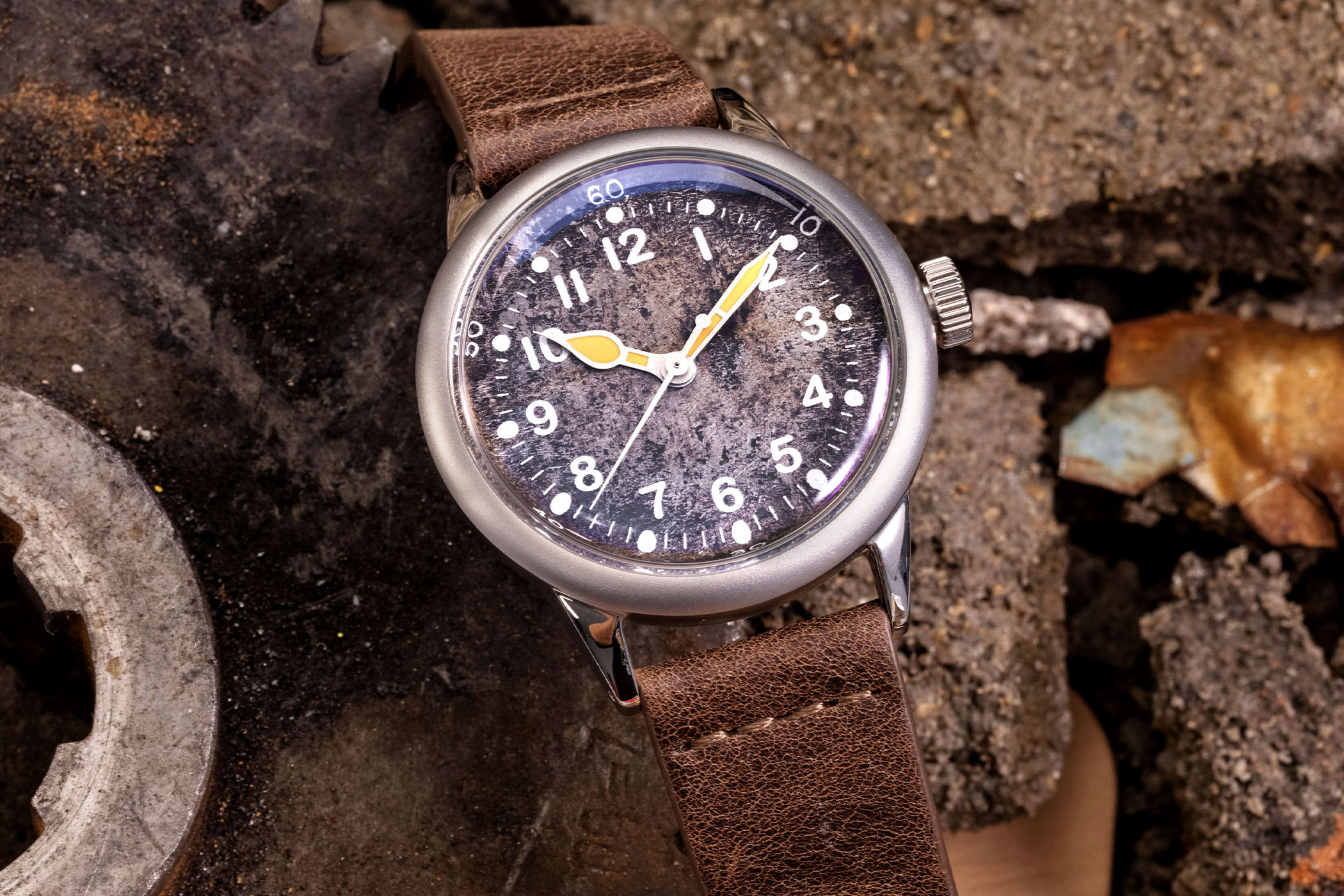 The dial is the real standout and most authentic part of the watch – literally. It’s made from Marston Mat found on a farm adjacent to UTAH Beach, the westernmost location of the five landing beaches in Normandy. Marston Mat is pressed steel planking with punched holes to reduce weight and facilitate drainage, and it could be interlocked to create extended, stable surfaces over sand and other terrains. It was extensively used during World War II for land vehicles on beaches and was a vital component of D-Day. 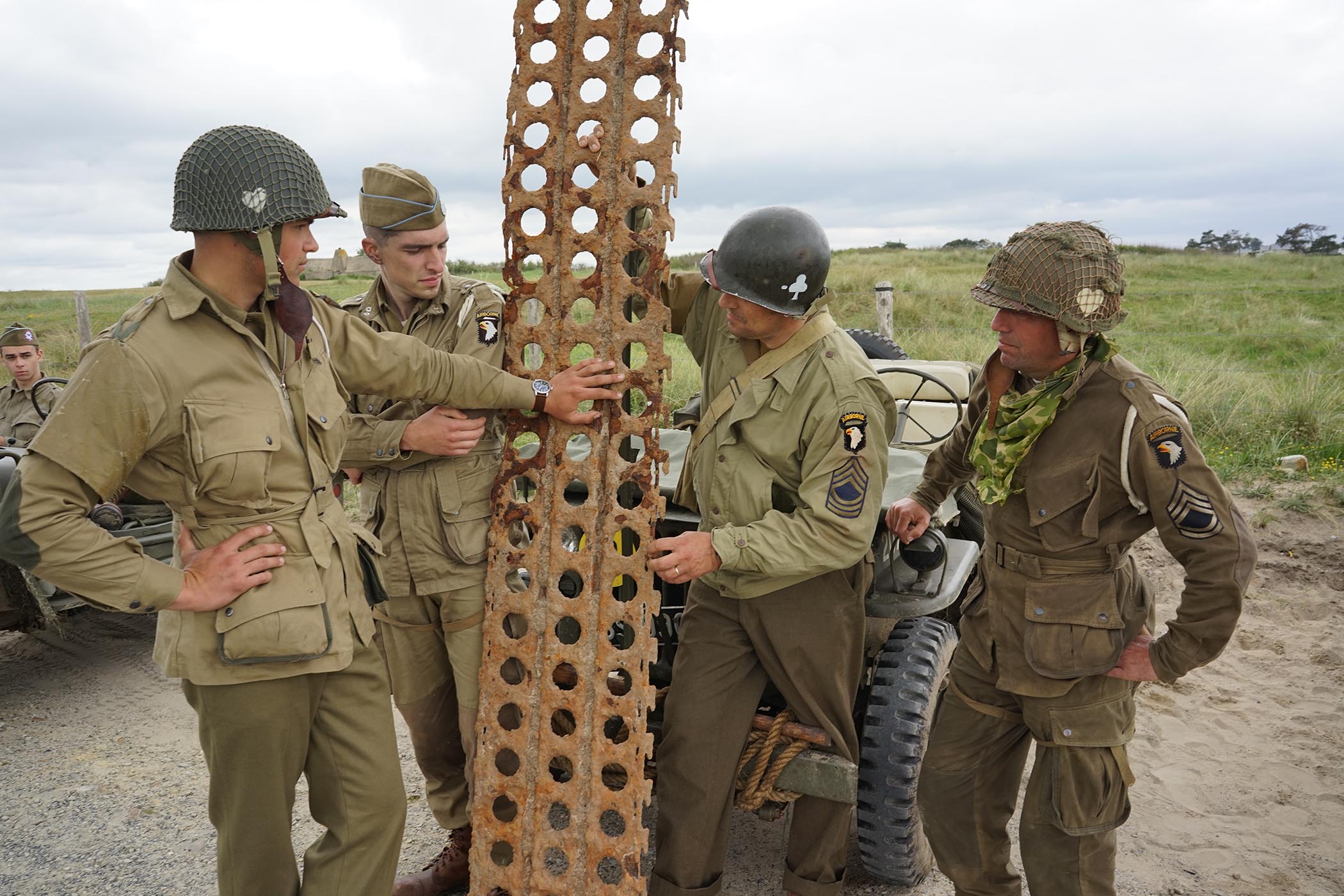 In addition, full steel-mat runways were successfully constructed in France following the invasion of Normandy. The almost 80-year-old Marston Mat was found at a farm of the town’s mayor, Charles de Vallavieille, who’s also linked to the UTAH Beach D-Day museum in Sainte-Marie-du-Mont. It sat in a nearby shed for years and when a Praesidus friend/Frenchman introduced some new A-11 watches for the museum during last year’s D-Day event, the historic steel was offered for inclusion in future watches. 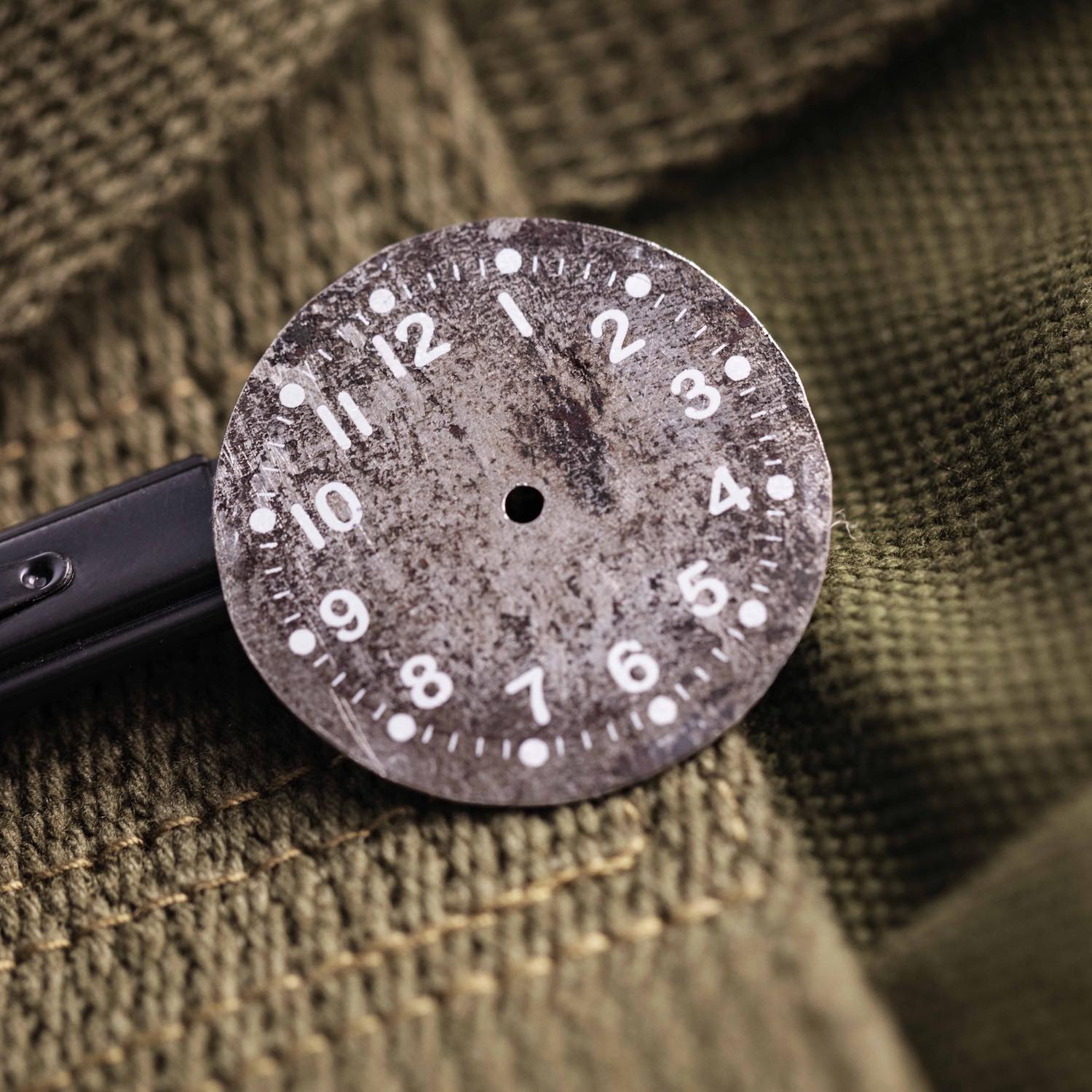 The steel was prepared, but not refinished for the dials. The patinated aesthetic is on full display after (most) rust, dirt, etc. was removed with high-pressure water. Nothing was sandblasted or ground, for example. It had to be thinned down to just 1mm and pressed to a flat sheet, and a conservative estimate of 100 dials could be made from the available material. Like the vintage watches, the dial print is white over a dark background (but not black in this case). There’s the requisite A-11 hacking centre seconds hand and 10-minute numerals on the outer track, while the hour and minute hands have modern Super-LumiNova inserts (with a faux patina). The dial aesthetic makes the watch look old and genuine, and all dials will have unique, original markings. 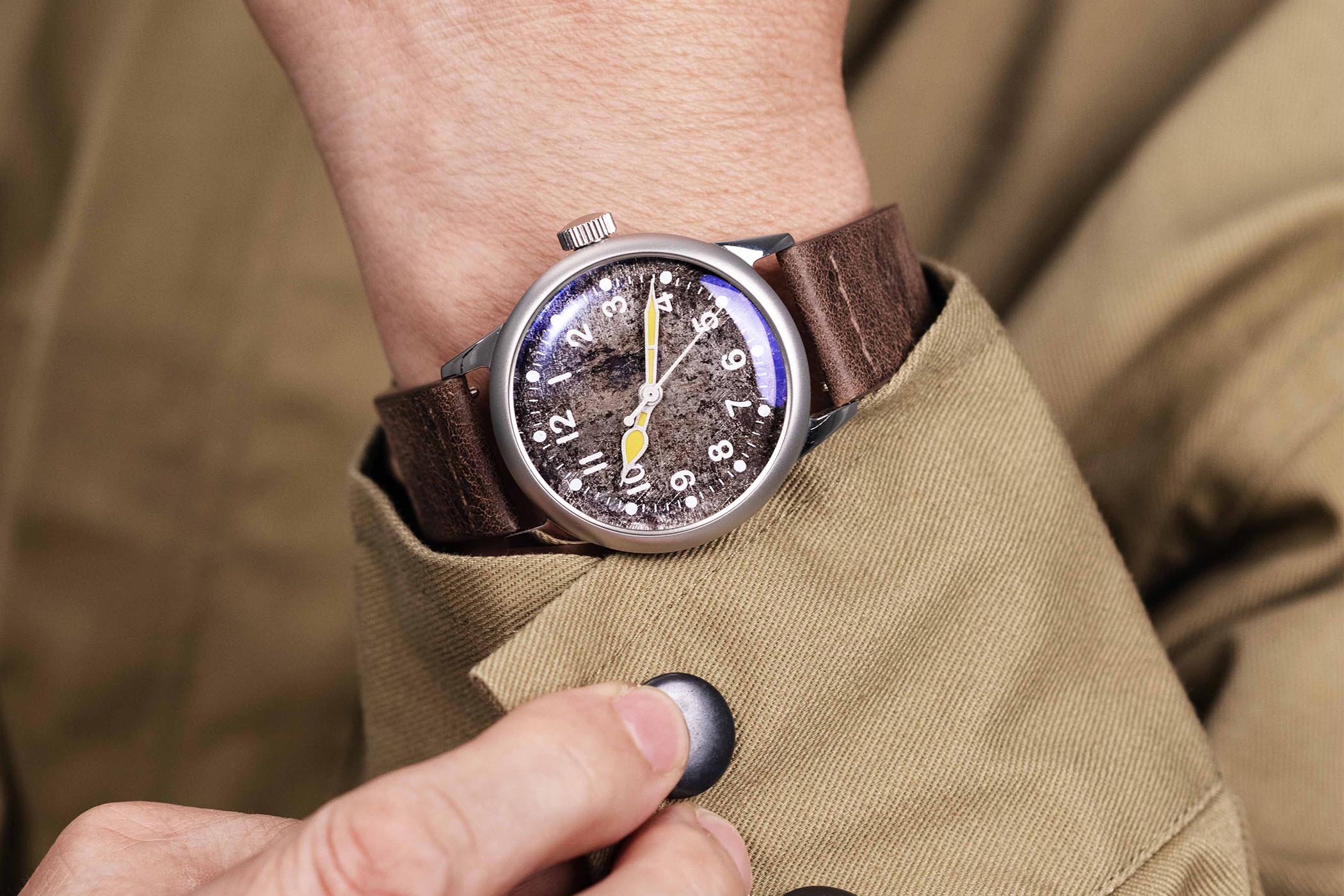 Powering the Praesidus A-11 Marston Mat is a Swiss P024 automatic from Soprod, an alternative to ETA’s 2824. It has 25 jewels, and beats at 28,800vph (4Hz) with a 40-hour power reserve. Watch functions are retro and time-only with central hours, minutes and hacking seconds, although the movement does have a date complication that’s not used. This is not a Swiss-made watch as assembly happens in the US where original wartime watches were produced.

The Praesidus A-11 Marston Mat is limited to just 100 pieces and 70 watches have already been sold, so the remaining 30 will be offered on July 12th. A cool “dog-tag” made from the Marston Mat will also come in the box with a bit of information engraved about the watch. The piece retails for USD 595, which is a solid price for such a unique piece with historic World War II steel and a Swiss automatic. It’s scheduled to ship in October 2022. For more information and to place an order, please visit the dedicated page on Praesidus’ website.