The Pilot’s Watch by IWC is a real icon and ticks all boxes that make up a great Flieger. No wonder IWC makes sure to keep the collection up to date and regularly refreshed. Expanding on the already impressive collection, the Schaffhausen-based manufacture introduces the downsized Big Pilot’s Watch 43, which we’ve already seen here, as well as the IWC Pilot’s Watch Chronograph 41. Using the same recipe as before, but in a new size, with a new movement and several features to make it better than ever, we take a closer look at the latest member of the Big Pilot’s club in the video above and our hands-on article below. For over 85 years, IWC has enjoyed a long-lasting connection to aviation following the introduction of its first aviation timepiece in 1936. Ever since it has been perfecting the concept of a Flieger watch with one thing in mind: legibility. The functional requirements of a true pilot’s watch have remained largely unchanged for a very good reason: they work, and they work well.

The instrumental design and overall robustness make IWC’s Pilot’s Watch collection a popular choice. For added functionality, the Chronograph version compromises the ultra-clean and utilitarian concept ever so slightly but makes perfect sense. Allowing for the tracking of elapsed time down to the second, a chronograph complication is well suited for the aviation-inspired Pilot’s Watch. The current IWC Pilot’s Watch collection is directly descended from the 3711 and 3705 models introduced in the mid-1990s. It was only a couple of months ago that IWC introduced the Pilot’s Watch Chronograph “Tribute to 3705” as a celebration of the original. Following the formula used on the new Spitfire Chronograph in 2019, IWC introduces an updated chronograph in a smaller 41mm case size along with a few other very important updates. This is actually 2mm smaller than the existing generation, the IW3777, with a 43mm diameter. But the biggest change to the Pilot’s Watch isn’t the design, which remains almost unchanged but on a smaller scale. No, the big update is underneath the dial, as the IWC Pilot’s Watch Chronograph 41 is now fitted with IWC’s in-house calibre 69385. This integrated column-wheel chronograph is the new standard for all IWC chronograph watches, stepping away from the old and outsourced Valjoux 7750 based movements. Compared to the outsourced movements, the calibre 69385 comes with a few important updates. It has a bi-directional pawl winding system, for instance, and a column wheel. It runs at a frequency of 28,800vph (4Hz) and stores up to 46 hours of power reserve. The easiest way to distinguish the two from the dial side is the new position of the small seconds sub-dial, now at 6 o’clock instead of 9 o’clock, indicated by a red-coated hand. The 231-part calibre 69385 is also visible through the sapphire caseback. The large trademark IWC rotor covers a nicely decorated movement with Côtes de Genève and perlage finishing. 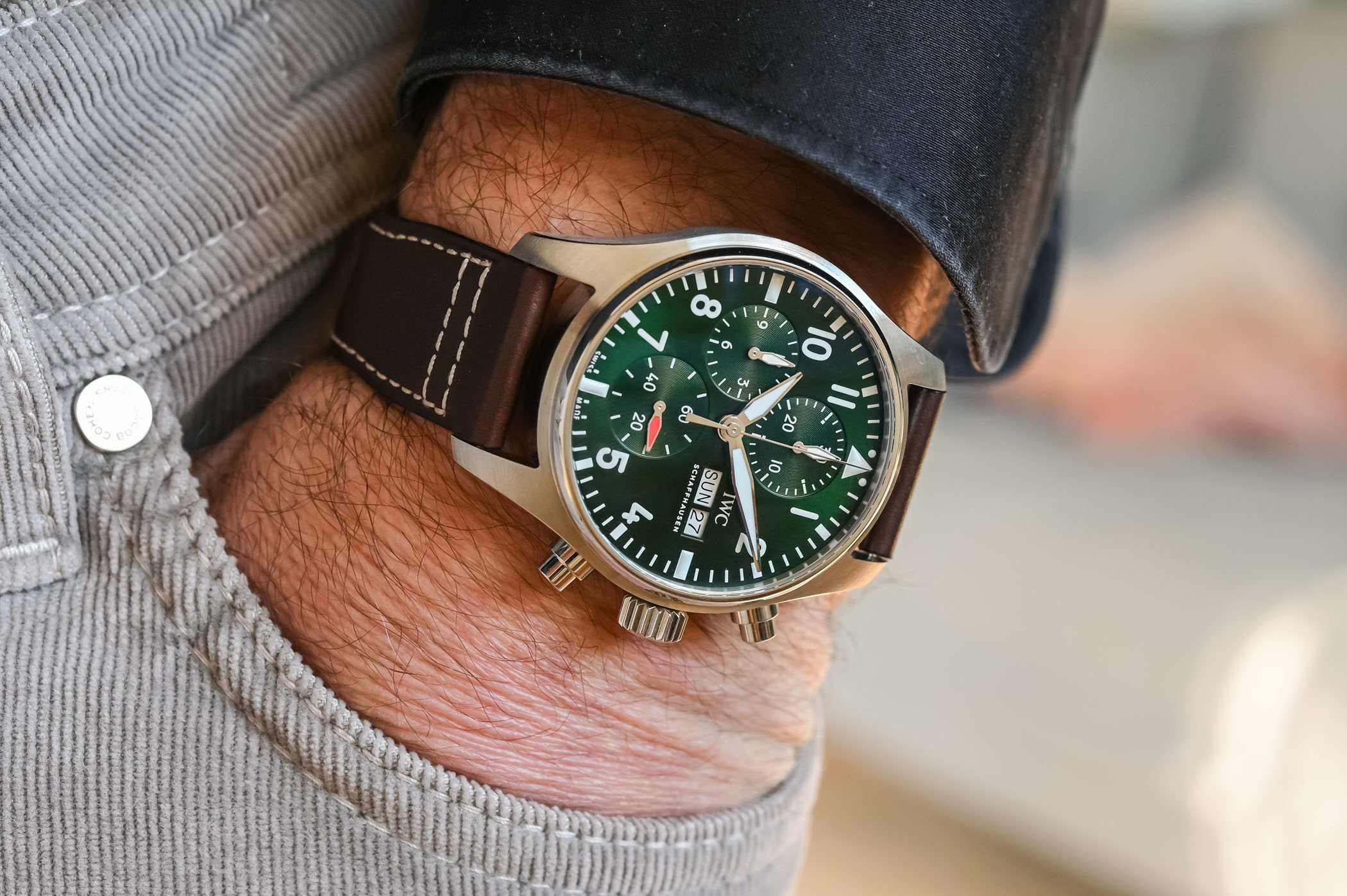 There are other updates to the case. The reduced size means a smaller diameter and a slimmer profile of 14.5mm (minus 1mm). The water-resistance is beefed up from 60 to 100 metres. This reduction in size and increased WR makes it a proper all-rounder, fit for virtually any wrist in virtually any circumstance. The familiar characteristics of IWC’s Pilot’s Watch are still there, with a highly legible dial consisting of contrasting markings and hands over a sunburst-brushed blue or green dial – no classic black dial available for the moment. The smooth dial is broken up into the typical 6-9-12 layout for the chronograph function, with sub-dials decorated with a concentric pattern. The small seconds is relocated to the bottom sub-dial while the others act as the 30-minute and 12-hours counters. The day and date windows remain at 3 o’clock, indicated by black markings on white discs. 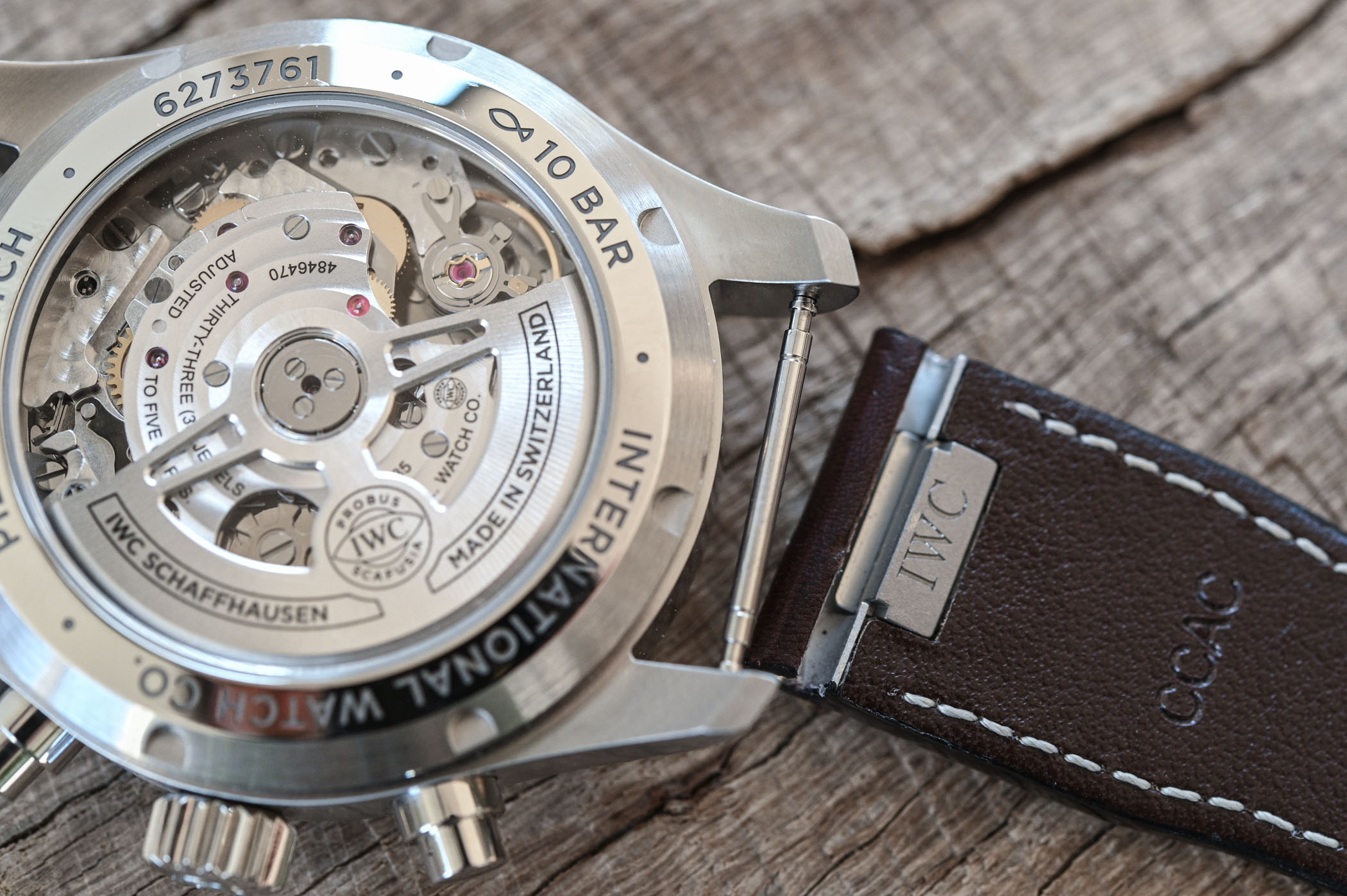 The IWC Pilot’s Chronograph 41 is fitted with either a five-link metal bracelet (with fine adjustment on the clasp) or a calfskin leather strap. A welcome update to the versatility of the watches is the introduction of a quick-exchange system making it easy to switch the bracelet for a leather strap or vice versa. A rubber strap will also be available as an alternative, either through IWC boutiques or online.

The IWC Pilot’s Watch Chronograph 41 ref. IW3881 is launched as part of the permanent collection and is priced at EUR 6,850 on a calfskin strap or EUR 7,600 on a steel bracelet. More information on IWC.com.

When the Odysseus by A. Lange & Söhne was announced in 2019, a lot of people took notice. It was to be the first...