It is rather surprising to see how some items have gained cult status years after their discontinuation, while when they were widely available, almost no one dared to pay attention to them… There are, of course, watches that have been overlooked before they shoot to unexpected fame. One such model is the 1994 “IWC Fliegerchronograph Keramik” or in an easier way, the Pilot’s Chronograph 3705, a watch that faded into obscurity before recently becoming one of the brand’s most collectable youngtimers. Today, the Schaffhausen-based brand pays homage to this cult classic with the new IWC Pilot’s Chronograph Edition “Tribute to 3705” that evokes the past, but also looks at the future. And we have it here today, with a video review! 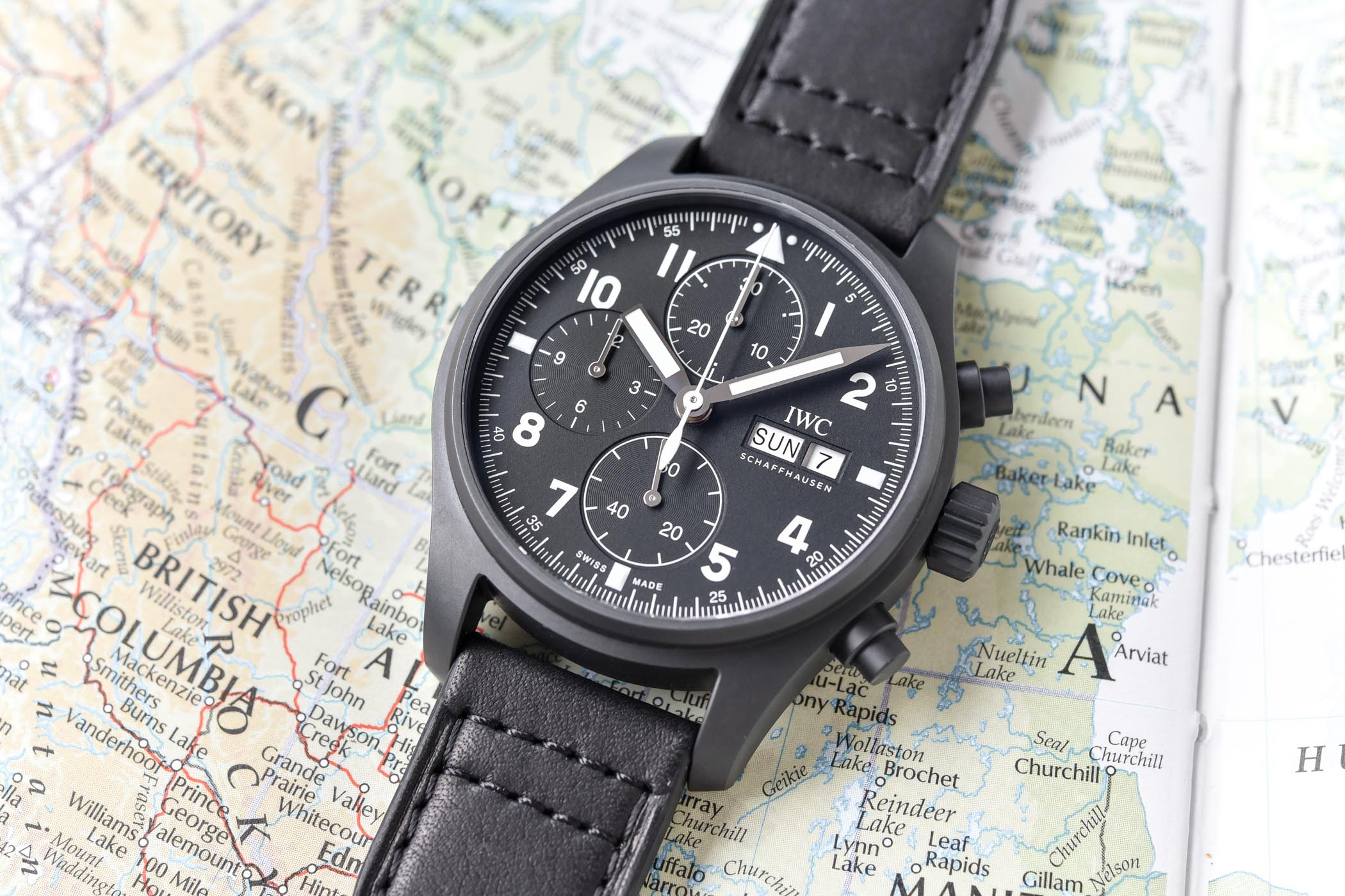 IWC is one of the watch manufacturers with the richest history in pilot’s watches. As soon as 1936, the brand started to produce purpose-built wrist instruments, such as the “Special Watch for Pilots” and, of course, WWII Observation watches that will inspire the design of the brand’s most famous flying timepiece, the 2002 Big Pilot’s watch. In the same vein, yet with far smaller cases, the military Mark XI Navigator’s Watch issued for the Royal Air Force (in service from 1949 to 1981) deserves here a worthy mention. 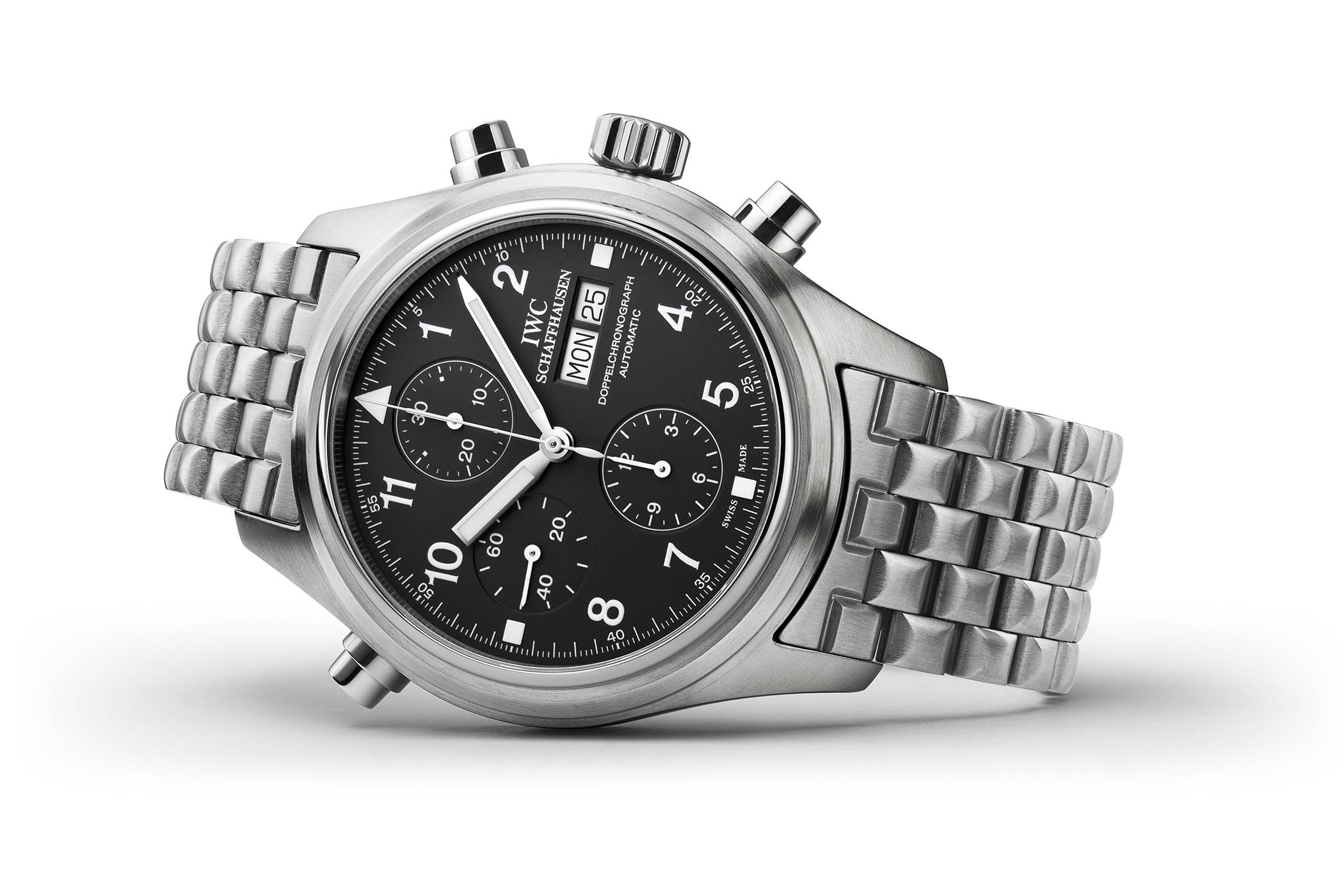 The starting point of IWC’s modern pilot’s collection, the 1992 Flieger DoppelChronograph 3711, with its movement based on a 7750 ébauche and equipped with a split-seconds module designed by Richard Habring.

But today, we must talk about modern watches, pieces that were inspired by this military past but produced for civilian use; the so-called IWC Flieger collection, driven by an idea of then-director Günter Blümlein. It all started with the reference 3711 seen above, launched in 1992. This watch, equipped with a rattrapante chronograph movement – so-called DoppelChronograph – was powered by a Valjoux 7750 base with an internally-developed and simplified rattrapante module by Richard Habring (at that time working for IWC). But more than its mechanics, the 3711 will be the foundation for the entire Flieger collection’s design, with its utilitarian look, its straightforward dial and hands and its robust case – measuring already 42mm back then. 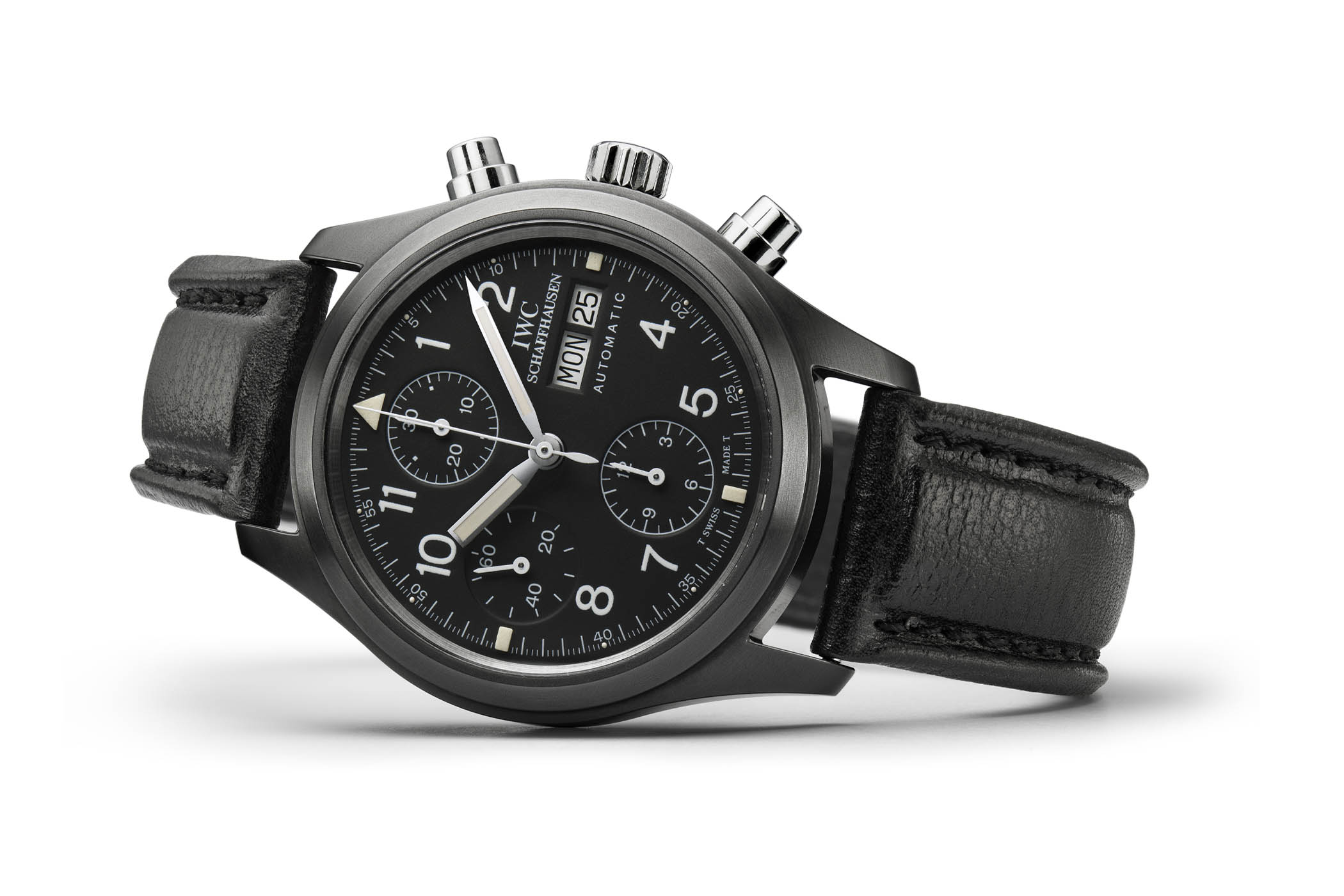 The 1994 IWC Flieger Chronograph Black Ceramic 3705, the brand’s first Pilot’s Watch with a case made of black zirconium oxide ceramic, and the model that has inspired today’s topic.

Two years later, in 1994, IWC launched a pair of simpler “Fliegerchronograph” watches, with standard 7750-based movements. Visually and technically identical, there was the ref. 3706 in stainless steel and the one you can see here, the 3705 and its black zirconium oxide ceramic case – a first for the brand’s pilot’s watches. Measuring 39mm in diameter, its matte black case was still featuring steel pushers and crown. Yet, the dial and the hands were completely in line with its predecessor, the 3711. While the steel 3706 has been widely produced, the black ceramic 3705 enjoyed little success during its 4-year career (1994-1998), with only about a thousand pieces produced. The main reason that could explain this was its price, about 50% higher than the stainless steel version. 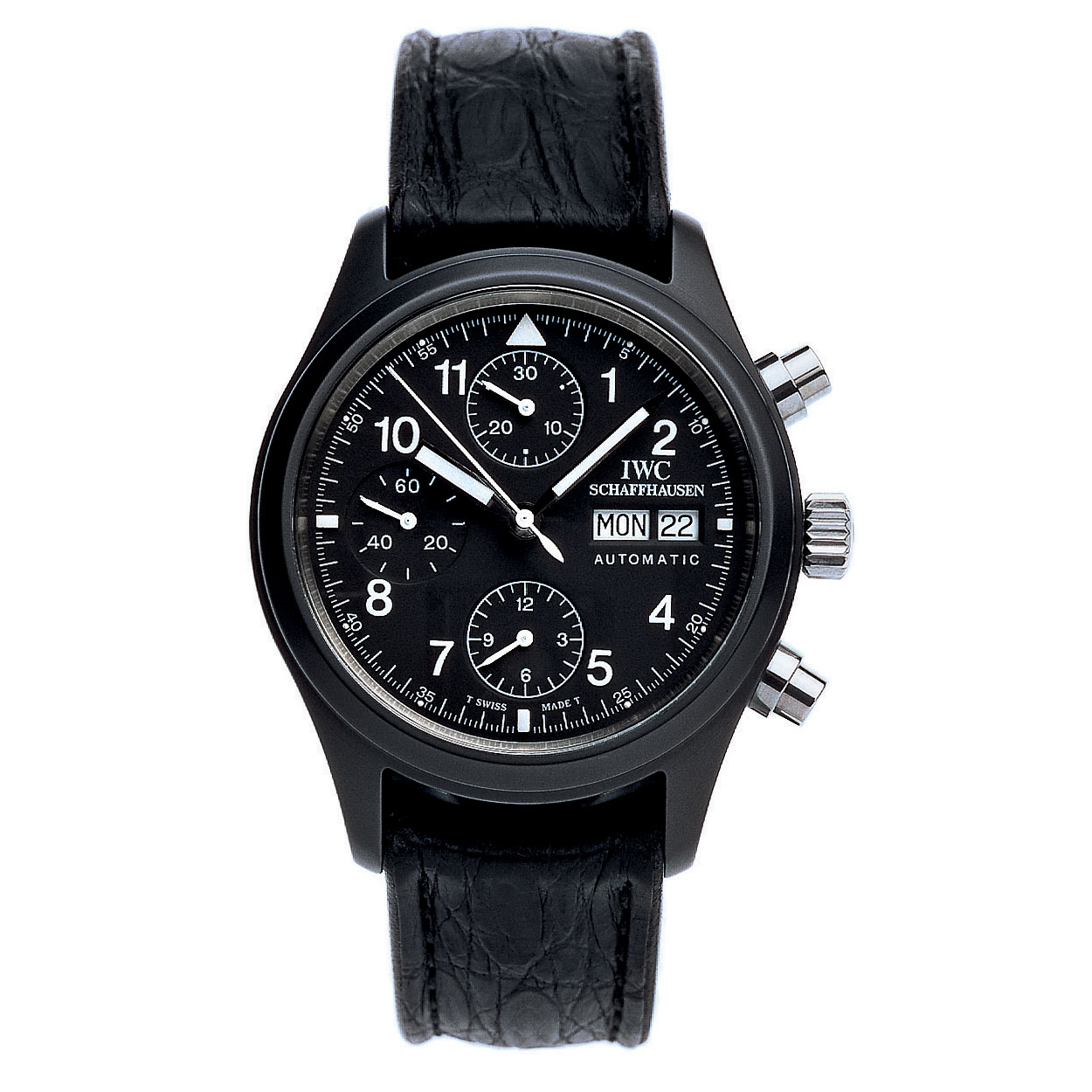 Contrary to some icons such as the Big Pilot or the Portugieser Chronograph, this Black Flieger 3705 not only didn’t sell well during its career but also felt into oblivion for about 20 years. But with a growing interest in so-called youngtimer models, this rare Ceramic Fliegerchronograph 3705 will soon catch the attention of a growing number of watch enthusiasts and its value will rise drastically to become one of the brand’s most collectable modern watches. For instance, one piece from the personal collection of former IWC director Günter Blümlein was auctioned recently for over USD 50,000. And a regular model, without a specific pedigree, will now cost you over USD 25,000. This model, an early testimony to the extensive materials expertise that IWC has acquired since the 1980s, is now the subject of a modern re-edition, with the Tribute to 3705 you’re about to see.

Today, IWC releases a limited edition named the Pilot’s Chronograph Edition “Tribute to 3705″… and yes, its name says it all. We’re indeed talking about a new FliegerChronograph with a black case and dial inspired by the brand’s 1994 model. Knowing that, you could argue that this watch is just a new dial on a classic black ceramic TOP GUN model, such as the reference IW3891 or the recent SFTI edition… Well, it is a bit more complicated than that. It isn’t either a black version of the classic steel chronograph, the IW3777. So what is this new Tribute to 3705 all about…? 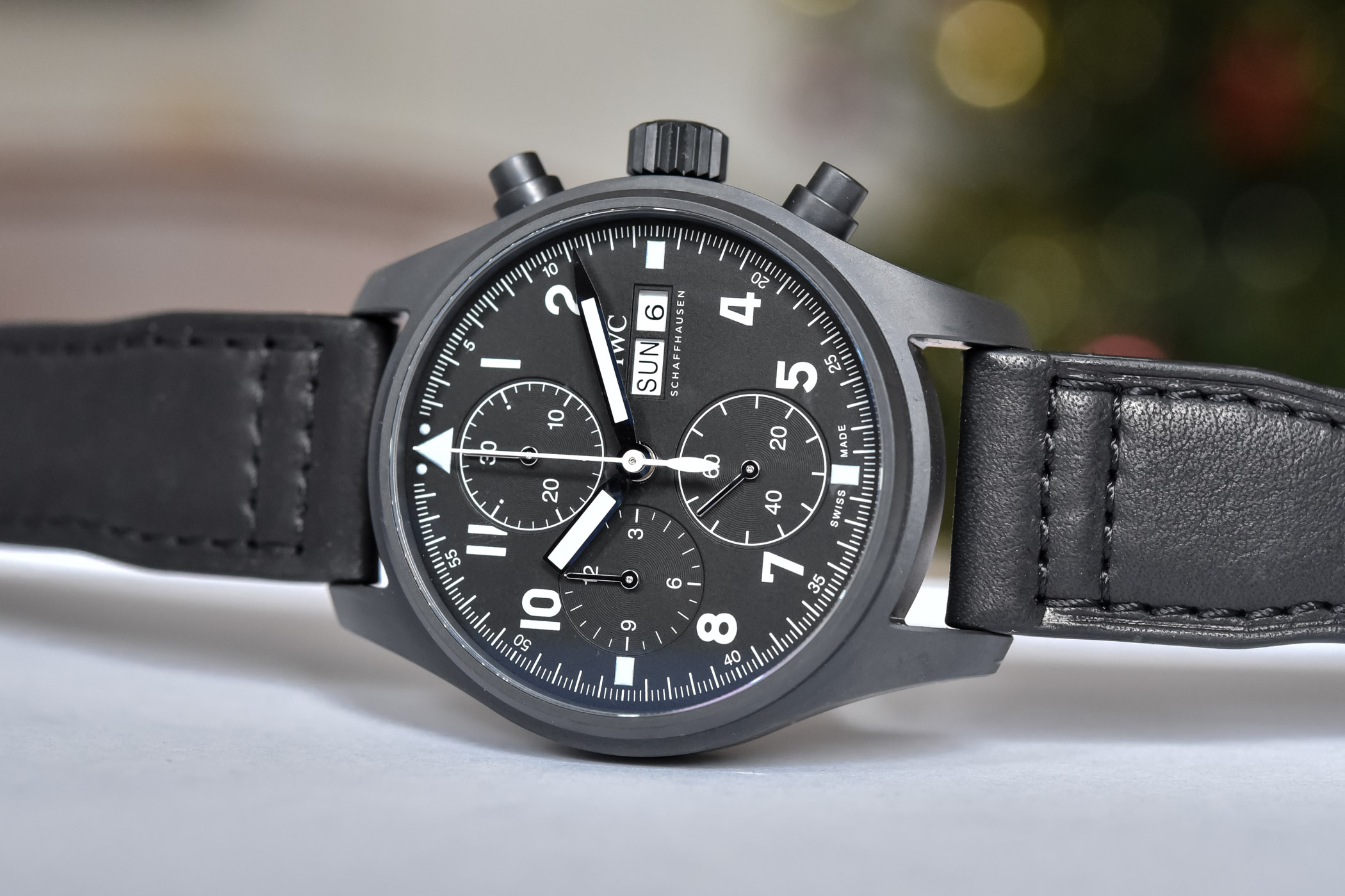 This new, slightly vintage model is actually closer to the recent (launched 2019) Spitfire Chronograph watches than from the rest of the collection – these share the same overall design and the same mechanics. First of all, this means that this watch has a reduced diameter of 41mm, while most of the FliegerChronographs available now in the permanent collection (excl. Spitfire) are 43mm in diameter. The case is also slightly different, with more curved surfaces and a stronger bezel. 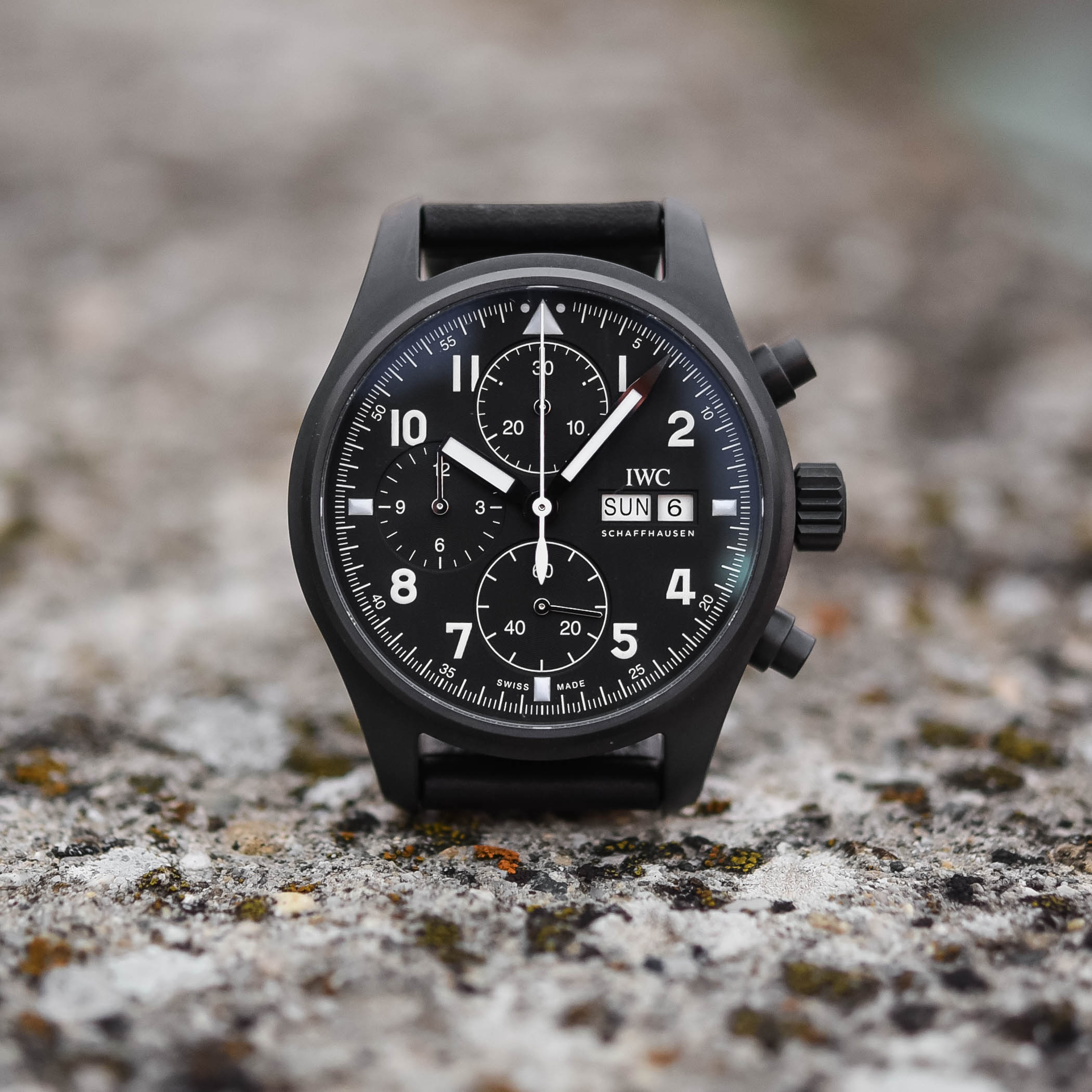 Second, and most importantly, being named “Tribute to 3705,” this new IWC Pilot’s Chronograph had to have a black case. And while we could have expected it to be made from classic black ceramic, like its ancestor, this new limited edition benefits from the brand’s latest material, a compound named Ceratanium. First presented in 2017 on an Aquatimer QP, this innovative material relies on properties of both titanium and ceramic – two materials that the brand masters since the 1980s. As light and robust as titanium, but also similarly hard and scratch-resistant like ceramic, Ceratanium results from components machined from a special titanium alloy, then treated in a furnace firing process, during which a phase transformation takes place, and the surface of the material assumes properties similar to ceramic. In the Tribute to 3705, the case, bezel, pushers, crown, caseback and buckle are made in this material – sadly, I’d prefer the crown and pushers still made of steel, for a contrast resulting in a weirdly attractive look… 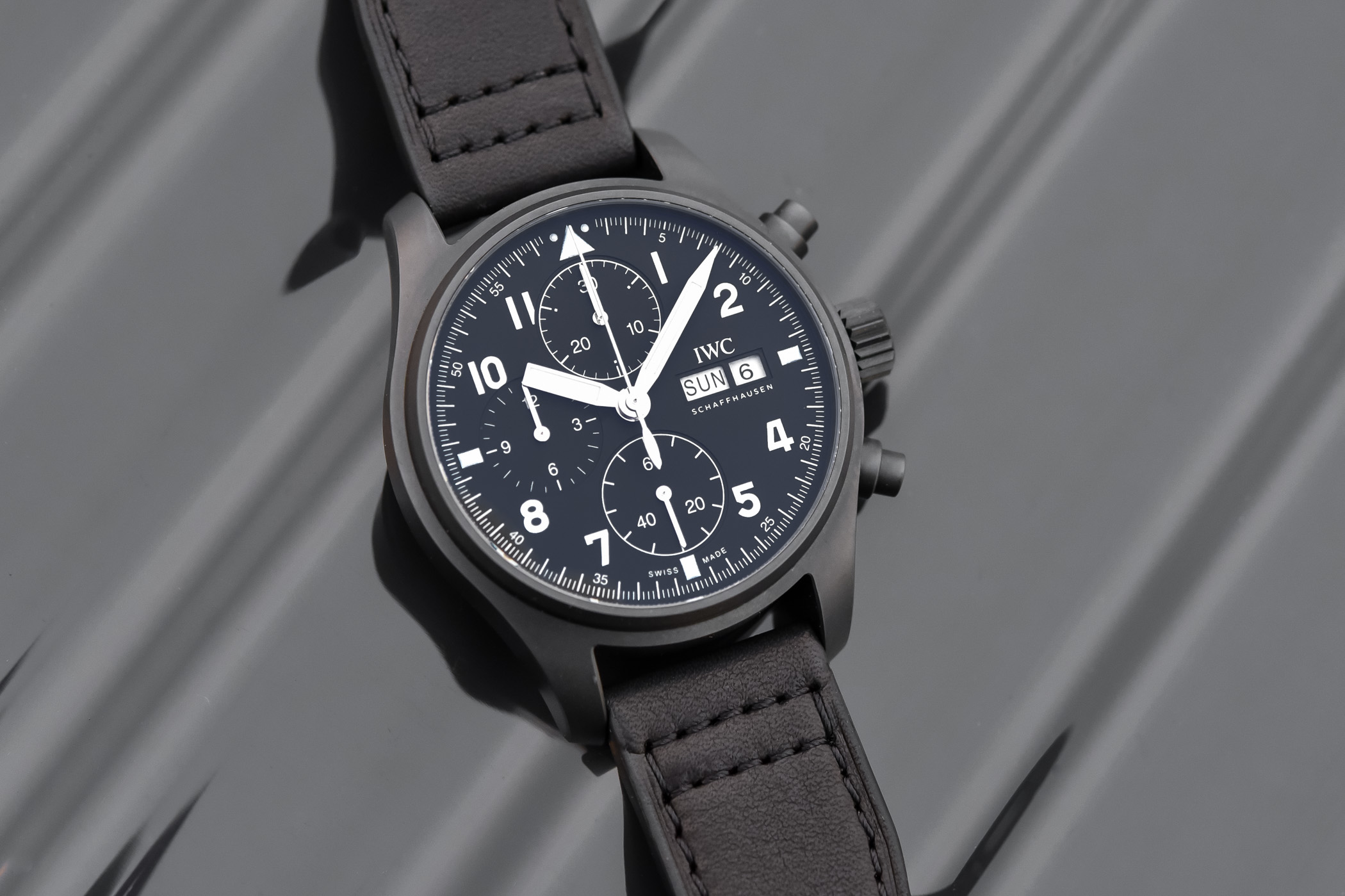 Nevertheless, Ceratanium is a great material that avoids some of the issues found on classic zirconium oxide ceramic – a material that is scratch-resistant, but that can also shatter in case of shocks. Also, it is light and the look is quite appealing, having a certain metallic reflection, compared to the pitch black colour of ceramic. The rest of the specifications are classic, with 60m water-resistance, screw-in crown, soft-iron inner case against magnetic fields and sapphire crystal secured against displacement by drops in air pressure. 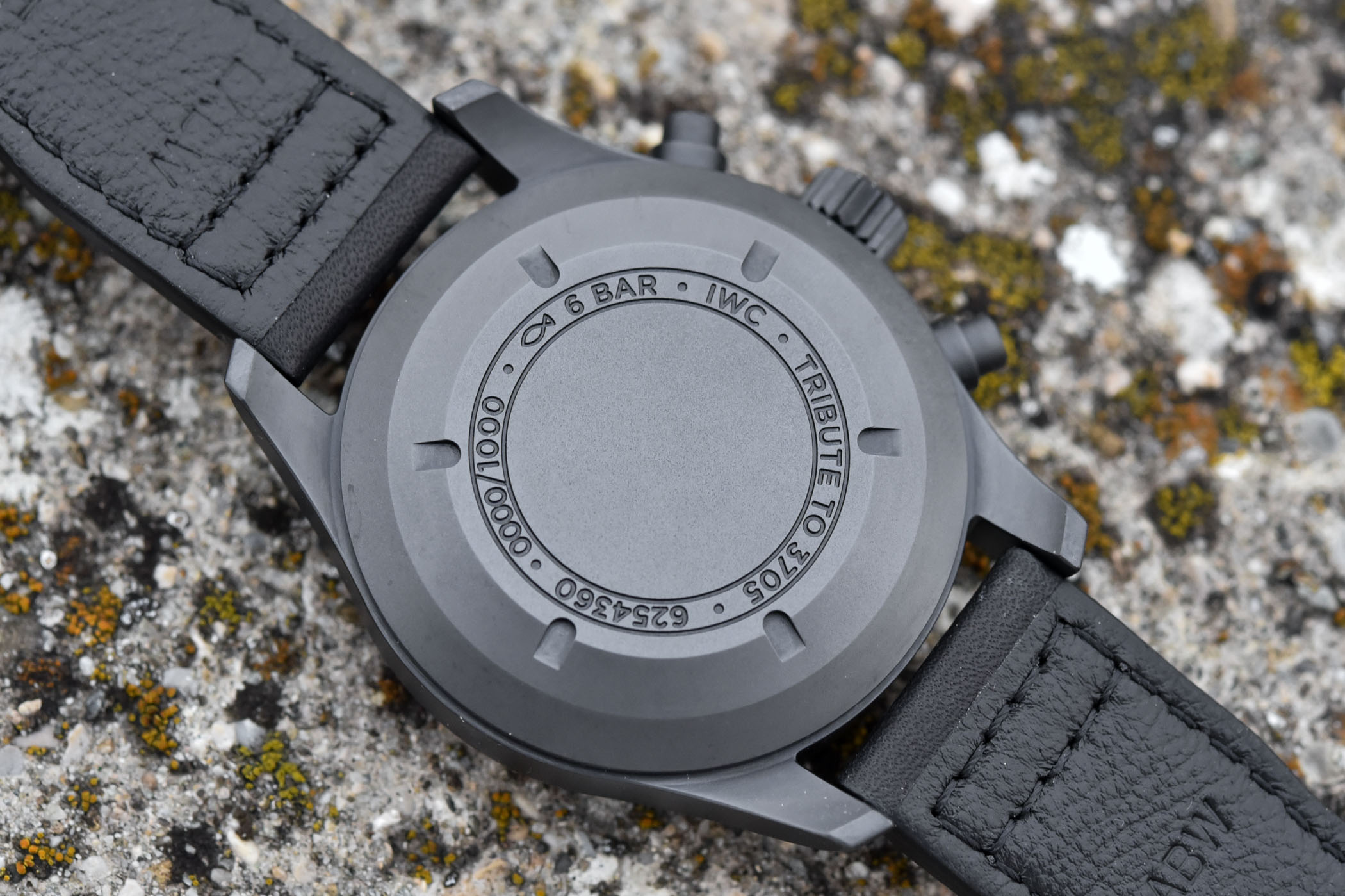 The other obvious update to give this IWC Pilot’s Chronograph Edition “Tribute to 3705” its old-school flair is the dial. As such, IWC has given this new model the traits of early FliegerChronograph watches, specifically for the hands and indexes. The dial is classically matte black, with pitch white contrasting elements. No vintage-like fauxtina or cream-coloured lume here, which would have given some warmth to this watch. Here, the brand has decided to retain the original technical look of the 3705, as it was when new. As you can see, this new edition features the rectangular luminous blocks at 3, 6 and 9, as well as a luminous triangle (flanked by two points now) at 12 o’clock. 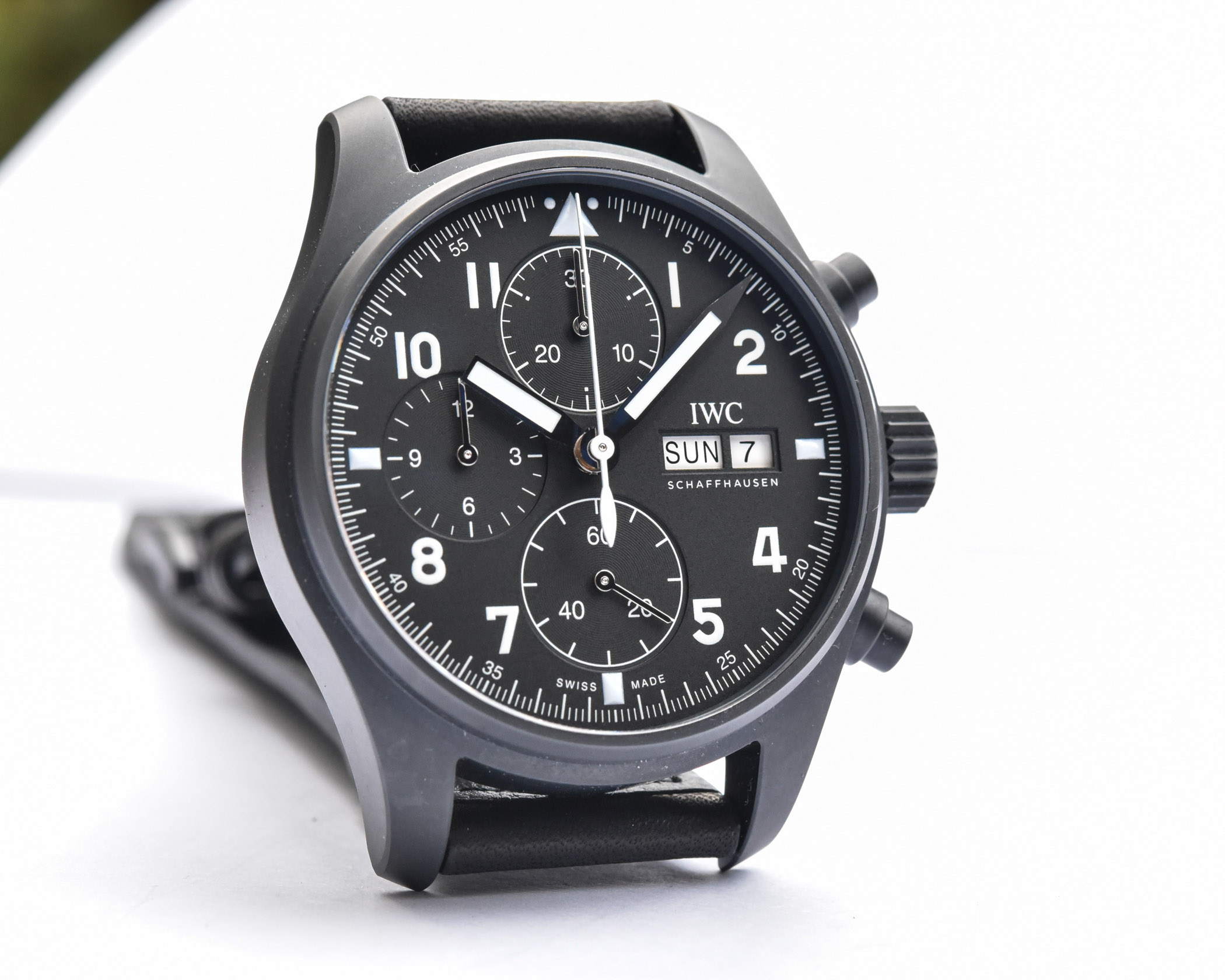 The rhodium-plated hands are also paying tribute to the 3705, with a straight-cut hour hand and pointy minute hand. The white second hand also retain its teardrop shape. A precision second track is found on the periphery, with large (non-luminous) white Arabic numerals. Trained eyes will, however, notice that all the elements have been slightly modernized in shape and have grown in size too. The display is classic to IWC’s simplest chronographs, with a 6-9-12 layout for the counters and a day-date complication at 3 o’clock. 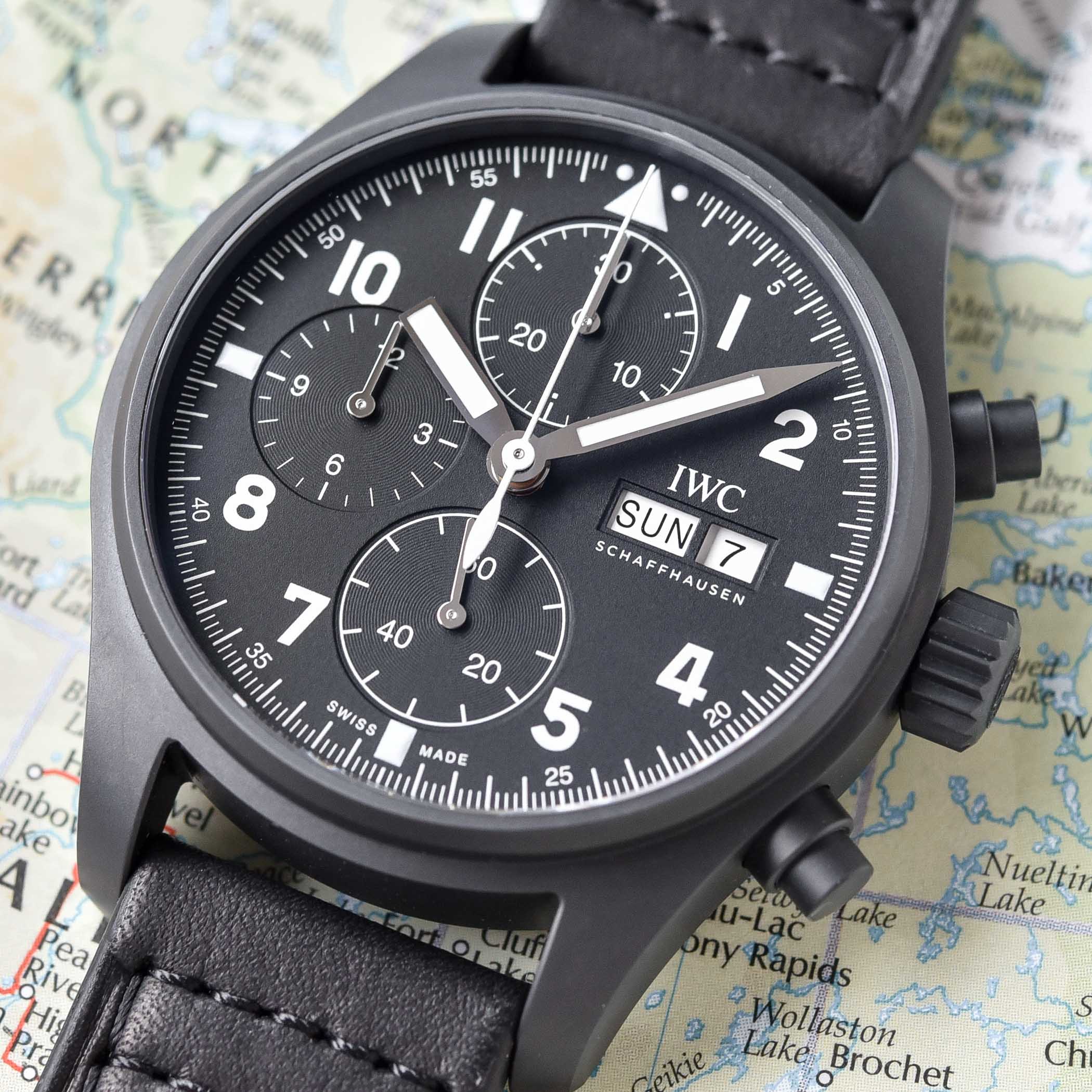 Inside the case, no major surprises, as the Tribute to 3705 comes with the brand’s “new standard” manufacture chronograph movement, the Calibre 69380. This integrated automatic engine has been developed to replace the old and out-sourced Valjoux architecture, and brings multiple evolutions such as a pawl winding system and a column-wheel. This movement runs at 4Hz and stores 46 hours of power reserve. Also used on the new Portugieser Chronograph 3716, this movement is easy to differentiate from the cost-effective Valjoux, with its small seconds positioned at 6 o’clock (and not 9 o’clock). 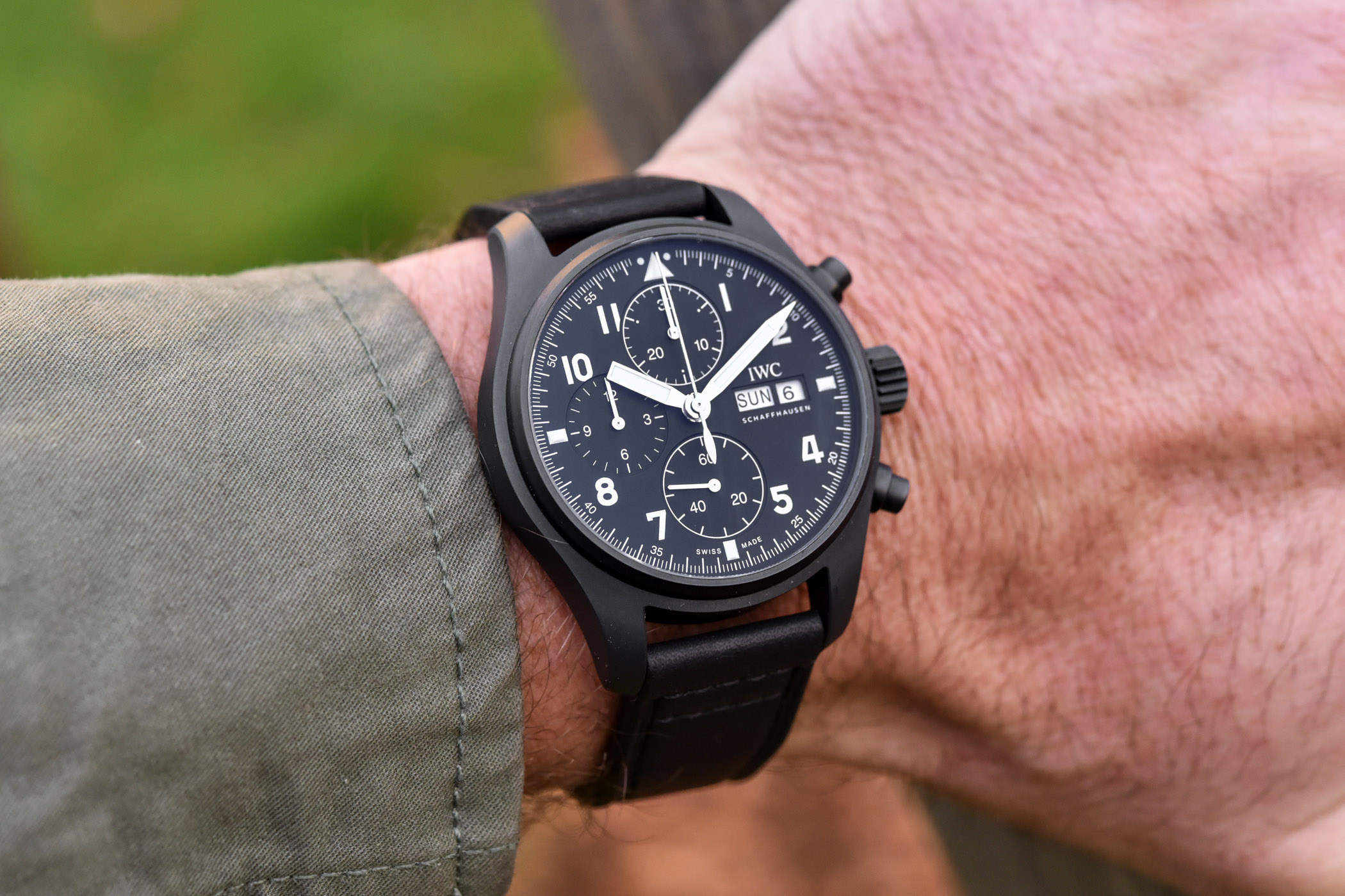 This limited edition is worn on a black pilot calfskin strap with a Ceratanium pin buckle. Relatively thick but surprisingly supple, it makes the watch comfortable on the wrist.