StartBloggers CornerIntroducing – The Hanhart 417 ES 1954, The Pilot’s Chrono now in...

The name Hanhart will, without a doubt, resonate strongly in the mind of vintage pilot’s watch fans. A German brand with rich history and an array of important models in its portfolio, mostly chronographs modelled after military-issued watches. In this field, one watch in particular surpasses all others, a model based on the first pilot’s chronograph for the German armed forces; the re-edition of the 417 ES. First seen in an enlarged 42mm case, followed by a limited edition with a reduced case, this very attractive watch now also comes standard in 39mm. Time to take a closer look at the new Hanhart 417 ES 1954.

A watch inspired by the first german pilot’s chronograph

Behind the modern re-edition we’re looking at today is an important military watch, and possibly the most important model ever created by once-Swiss and now German brand Hanhart. The brand quickly specialised in stopwatches. The first Hanhart wrist chronograph was launched in 1938 and was powered by the company’s in-house, single-pusher calibre 40. The model quickly became popular with both German pilots and naval officers during the war. A year later, the TachyTele pilot’s chronograph launched with the new calibre 41, a double-pusher flyback movement.

In the mid-1950s – in 1954 to be precise – Hanhart built the first dedicated pilot’s chronograph for the German armed forces based on three criteria: robustness, reliability and readability. The result of these requirements gave birth to the watch known as the 417, available in chrome-plated brass (417) and stainless steel (417 ES, for Edelstahl, German for stainless steel). Hanhart supplied the German armed forces with this chronograph – so-called Bundeswehrchronograph – for almost ten years until the brand concentrated on building hand stopwatches in 1963.

The original Hanhart 417 ES, a watch measuring 39mm in diameter, had all the classic attributes of Flieger chronographs and Hanhart stopwatches, with the signature continuously rotatable fluted bezel with a red marking. A noticeable evolution compared to the WWII-era timepieces is that the 417 ES was equipped with pencil-shaped hands in place of cathedral hands. These were powered by the brand’s in-house calibre 42, a hand-wound flyback column-wheel, two-pusher chronograph movement with 17 jewels. It is believed that around 1,000 examples were made, with only half of them being ES models.

Hanhart is still operating, with headquarters in the beautiful German region of the Black Forest, and still offers a wide range of pilot-inspired chronographs, such as the Primus (a modern watch) or the Pioneer (vintage-looking watches). And there’s still something rather unique in the brand’s portfolio, something almost no other brand manufactures these days, mechanical dashboard instruments. But importantly, in 2020, the brand released what we’ve considered its best watch in years, a relatively faithful reissue of the 417 ES, materialised in this model with a 42mm steel case, bi-compax black dial and hand-wound movement. Surely, the intention was not to be 100% faithful to the original watch, since the mechanics had to be different, and also because expectations from potential customers have drastically evolved over the past 70 years, but the idea was to be as close as possible. 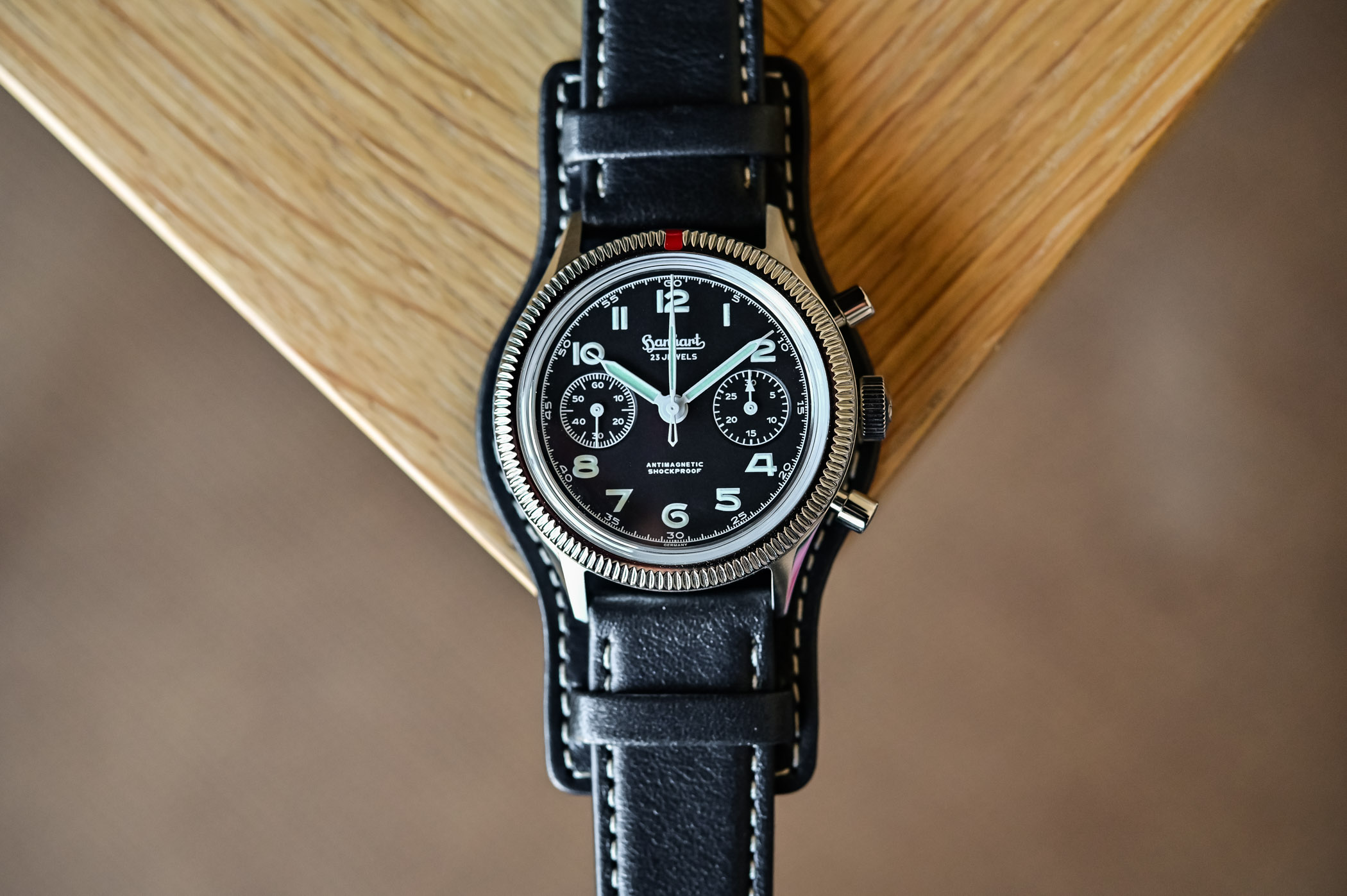 If there was one thing to complain about with the original re-edition of the Hanhart 417 ES, it could possibly be its enlarged case. The rest, in all fairness, was all lovable. Good looks, good quality, reliable movement, charm and fair price. Hearing the comments of its fanbase, Hanhart adds a new version of this watch now to the collection, with a case diameter downsized to 39mm and thus, historically faithful and identical to the 1950s model.

What has changed compared to the inaugural 42mm re-edition of 2020? Well, not much, and it’s a good thing. Basically, we’re just looking at a reduced model, which remains entirely identical on all other topics. As such, the case is now 3mm small, with a 39mm diameter. The thickness doesn’t change, at about 13.5mm. However, the lug-to-lug measurement benefits from the same reduction as the diameter, meaning now 46mm versus 49mm on the larger version. And of course, this has a strong effect on the way the watch sits on smaller wrists, and on the vintage effect too. The main advantage is that now, you’ll have options. Enlarged or historically relevant. 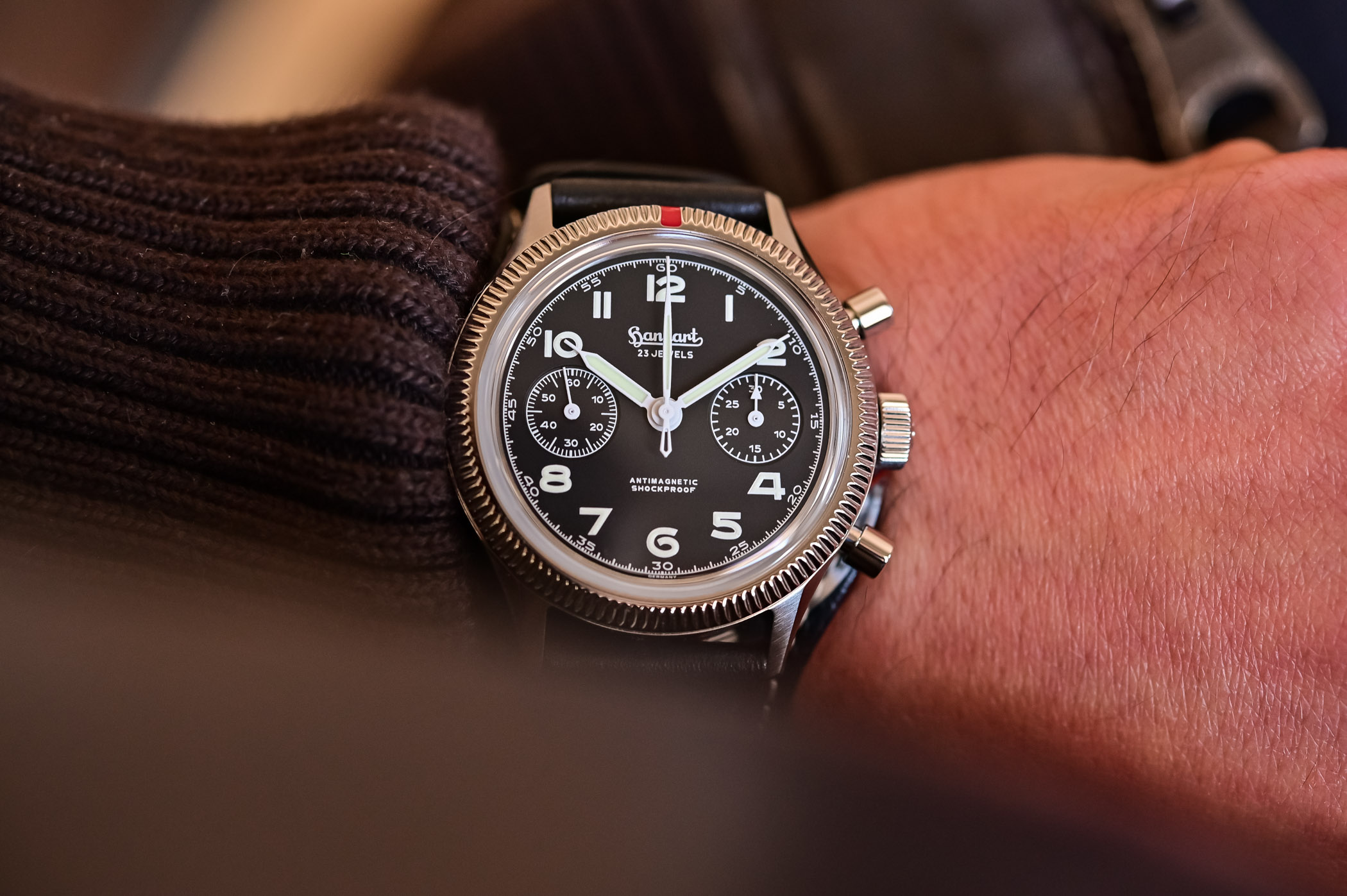 For the rest, the case sticks to the same principles. A stainless steel base, with mostly brushed surfaces and a polished bevel on the side of the lugs, classic pump pushers for the chronograph, a large crown with the historic H logo and a solid steel, screwed caseback for a 100m water-resistance. The Hanhart 417 ES 1954 39mm is topped by a box-shaped sapphire crystal, mimicking the looks of a vintage plexiglass, framed by a fluted polished bezel. The latter is bidirectional and operates smoothly, being continuously rotatable (no clicks), and it features a red marker to run calculations. 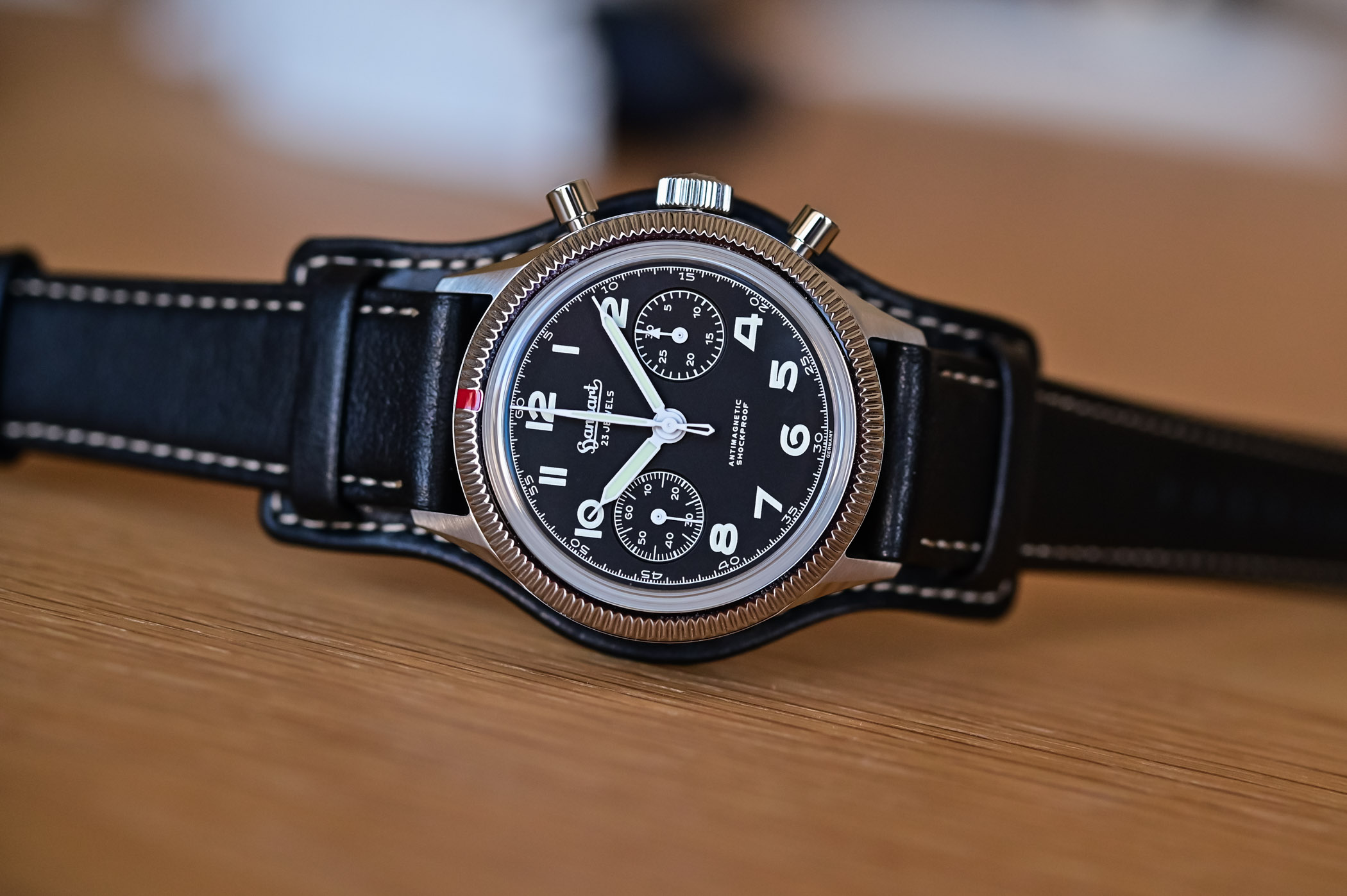 The dial has evolved slightly, mostly due to the change of proportions. As such, and even though the sub-dial spacing is the same, there’s less empty space on each side, the counters being closer to the bezel. All the rest remains the same. The base is matte black with printed Arabic numerals, typical of pilot’s watches. All markings and logos are white and crisp, with a very good sense of contrast and appreciable legibility. The three main central hands are largely filled with Light Old Radium Super-LumiNova, and so are the numerals. The rest of the dial consists of a historic Hanhart logo and 6 o’clock printings that evoke the vintage model. 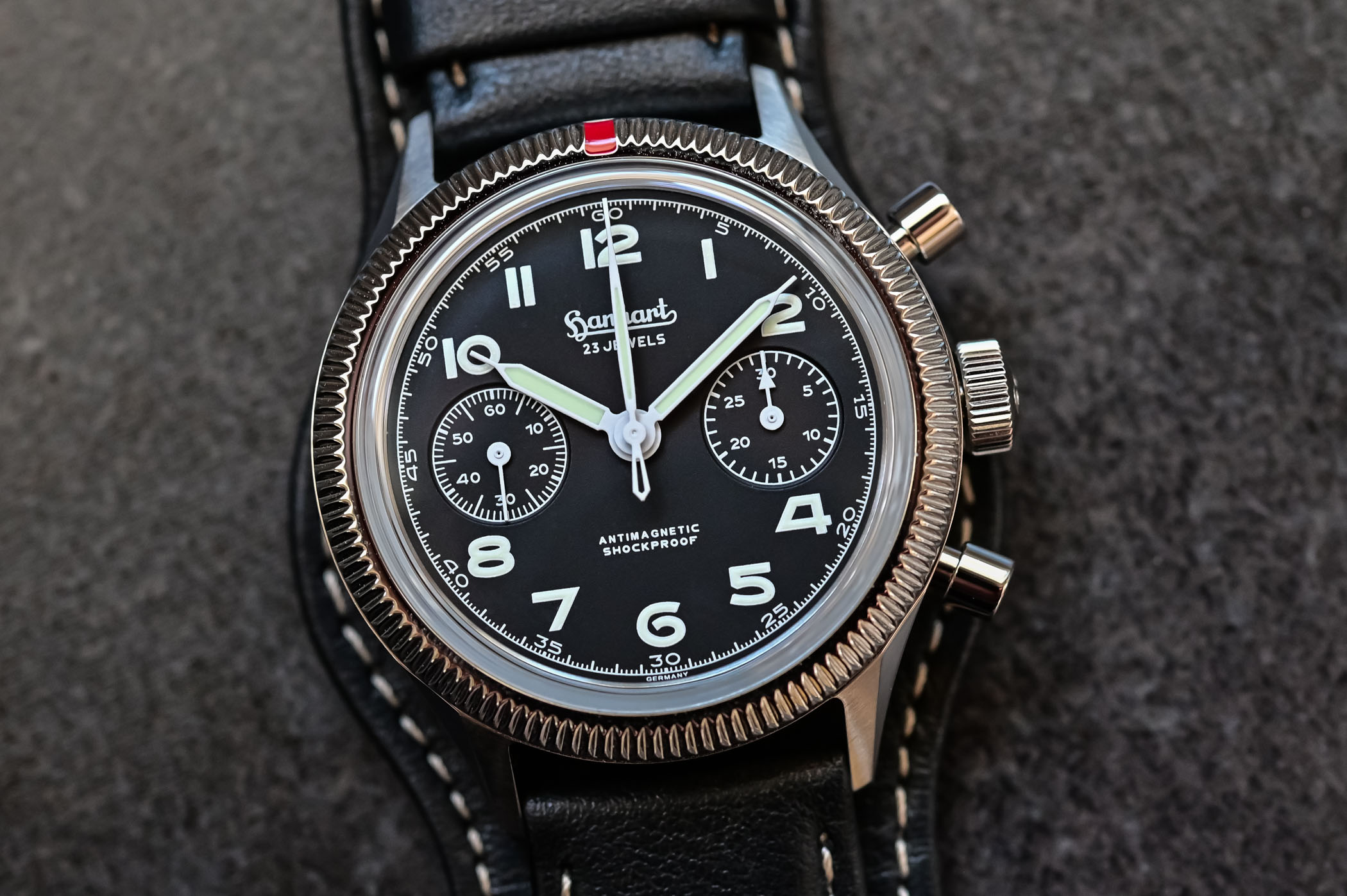 Looking closely at the details, you’ll see that all the hands are bent to prevent parallax errors. Also, and it might just be the effect of the hour hand being shorter on this 39mm compared to the 42mm, but I have the feeling that it’s slightly bolder than before. In the same vein, the lume also feels a bit less “yellowish” on this version. But I’m really getting into the fine details here. To summarise, it’s all very classic, appealing, straightforward and thus, rather cool. No frills, just a well-executed, legible, vintage-inspired and characterful dial. 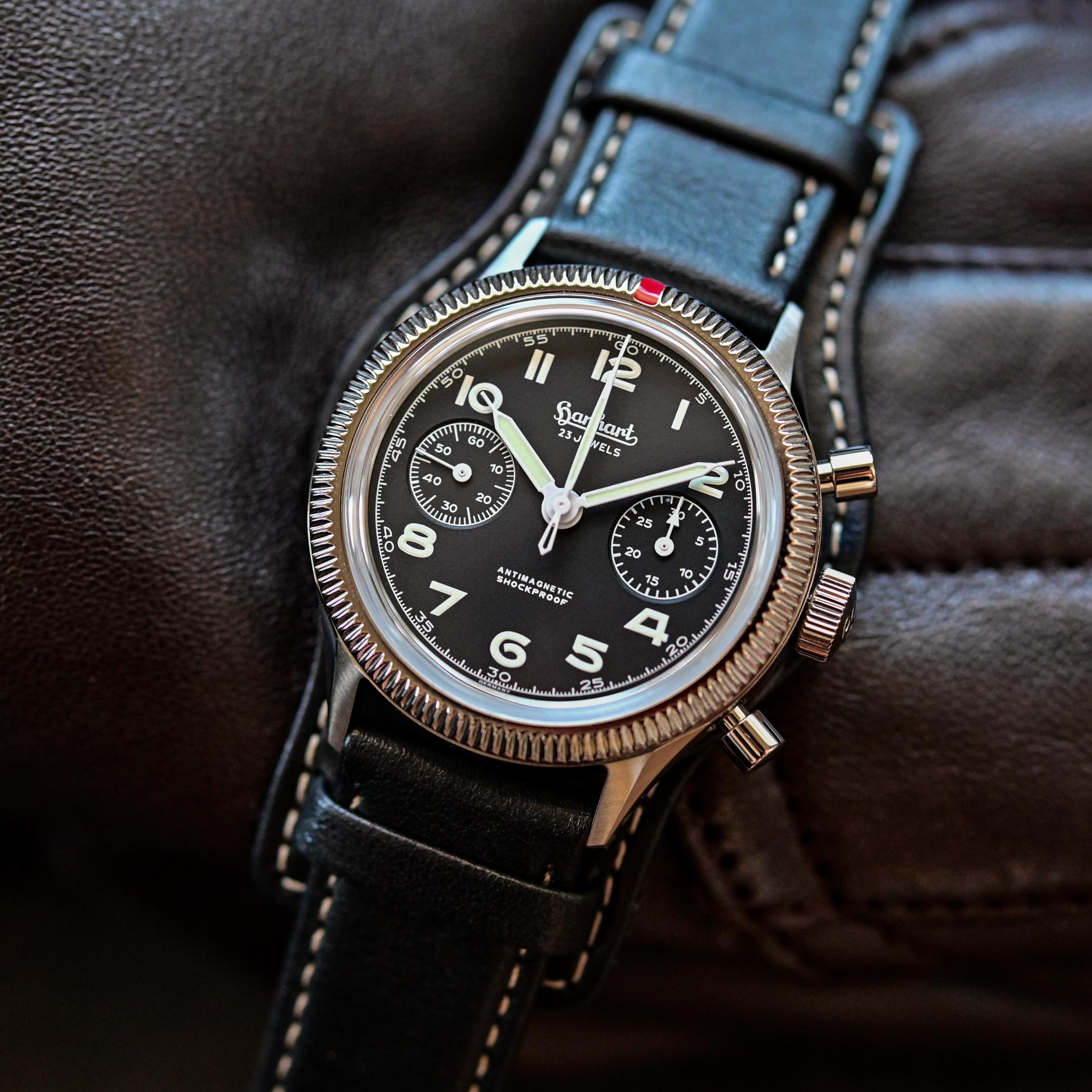 Just like its 42mm counterpart, the more compact Hanhart 417 ES 1954 is delivered on a Bund-inspired leather strap. Made of supple black leather with white stiching, it features an underlay (a plaque) that recalls the straps used by German pilots of a bygone era. The underside of the strap and the underlay are covered with Alcantara, which makes them a joy to wear. Just take into consideration that if the Bund strap adds an undeniable cool factor to this watch, it also makes it quite thick. But you can simply remove it and wear the watch classically, on the two-piece strap (as pictured above). 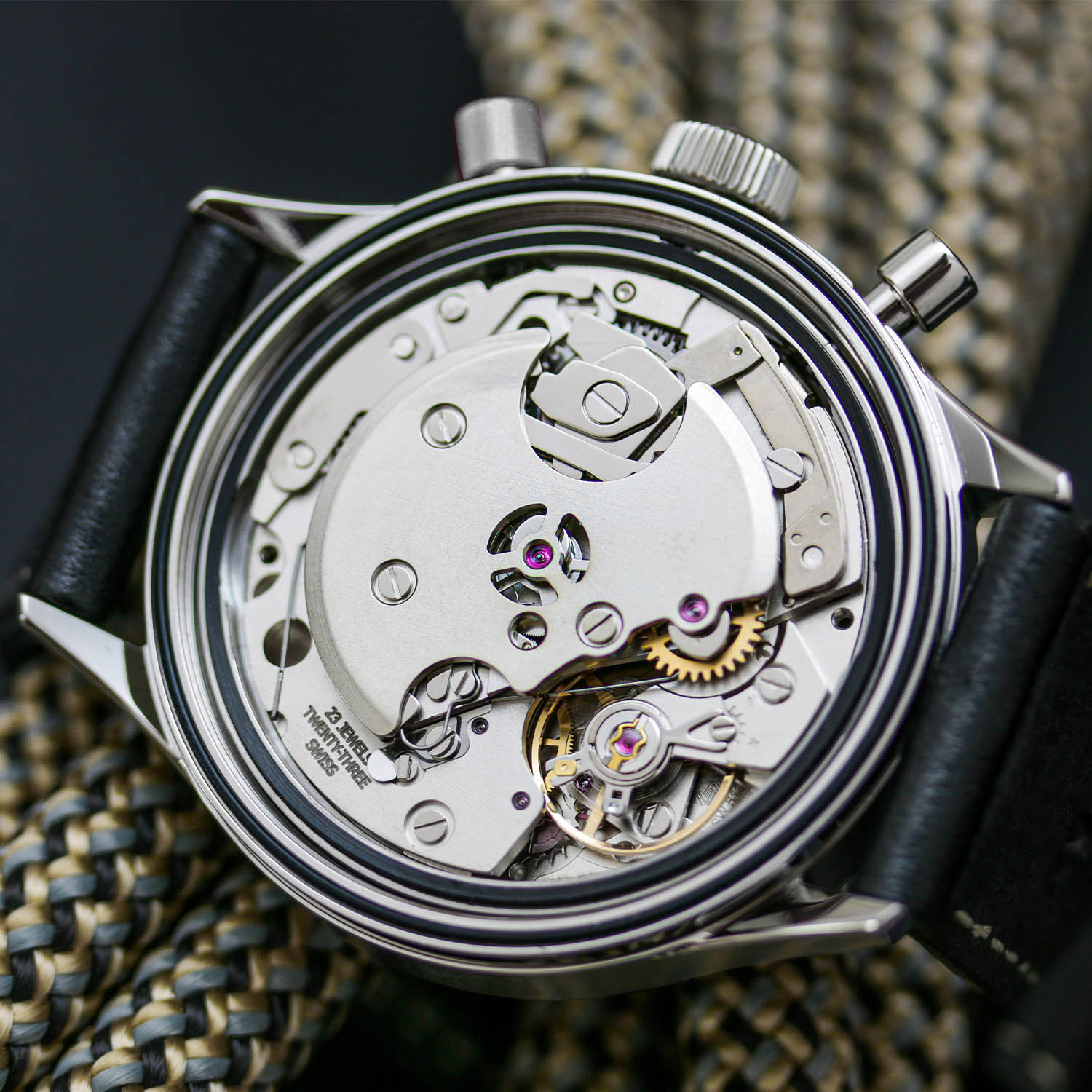 Inside the case of the compact 417 ES 1954 is the same movement as the larger edition, a hand-wound chronograph provided by Sellita, and based on the Valjoux architecture. A no-nonsense option that allows reliability, easy serviceability and fair price, it does its job perfectly and provides a solid 58h power reserve (Sellita has recently upgraded its movements).

The Hanhart 417 ES 1954 39mm is now available from the brand’s online shop and from retailers. It is part of the permanent collection and isn’t limited. It is priced at EUR 1,980 (incl. German taxes). For more details, please visit www.hanhart.com.