The Glashütte region in South-East Germany is home to many very interesting watch manufacturers, ranging from relatively affordable to proper high-end stuff. The region is famous for a very distinct style of watchmaking, which radiates through pretty much any brand currently in operation. Clean, legible, nicely finished and often with clever and practical complications, it seems Germans simply do things differently. A brand we never covered before, for no apparent reason by the way, is Union Glashütte. With designs that tie in with the region’s aesthetical codes, Union Glashütte produces solely mechanical watches under the Swatch Group umbrella. But, as we’re about to see through the Union Glashütte 1893 Johannes Dürrstein Edition Power Reserve, there’s plenty to say about this brand. The history of Union Glashütte goes back a century and a half and is intertwined with several other high-end watchmaking companies from the Glashütte region. The story starts in 1874 when Johannes Dürrstein founded Dürrstein & Company in Dresden as a watch wholesaler. That same year Dürrstein & Company took over general distribution for A. Lange & Söhne. In 1893 Johannes Dürrstein founded the Uhrenfabrik Union in Glashütte, which is the start of the Union Glashütte name. The absolute pinnacle in the company’s history was the 1895 Grand complication pocket watch that came with dead seconds, 30-minute display, perpetual calendar, foudroyant, moon phase, petite sonnerie, grand sonnerie and minute repeater. 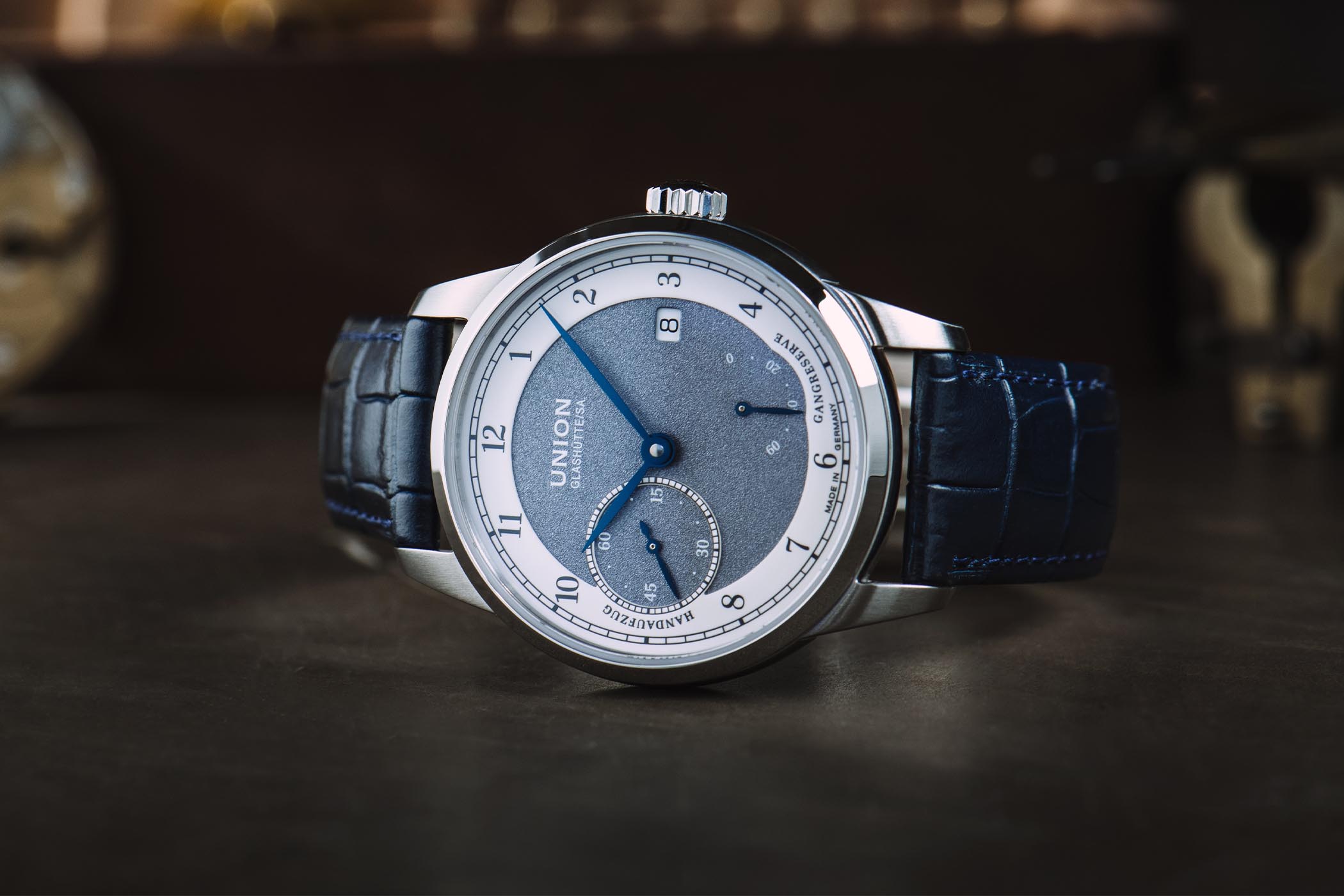 The company would be removed from the German Commercial Register by 1936 however, and basically laid dormant for the next 60 years. The Union Glashütte name was relaunched as a subsidiary to Glashütte Original, with the first collections appearing a year later. By 2000 the Swatch Group would acquire Glashütte Original and all its subsidiaries and facilities. GO was given the favour, with the production taking up all the available capacity. Union Glashütte however, was repositioned in 2008 with its own production facility in Glashütte. The company celebrated its 125th anniversary in 2018, with a Johannes Dürrstein Edition, combining Saxony watchmaking traditions with modern techniques.

The Union Glashütte 1893 Johannes Dürrstein Edition Power Reserve has a typical German design. Strong, masculine lines without ever looking bulky or heavy, and a mix of polished and brushed surfaces. At 41mm across and 12mm in height for the stainless steel case, it sounds like a good fit for anyone’s wrist. The sloped bezel holds a box-shaped sapphire crystal in place, with a second crystal found around the back. The knurled crown is signed with Union Glashütte’s U-shaped logo. 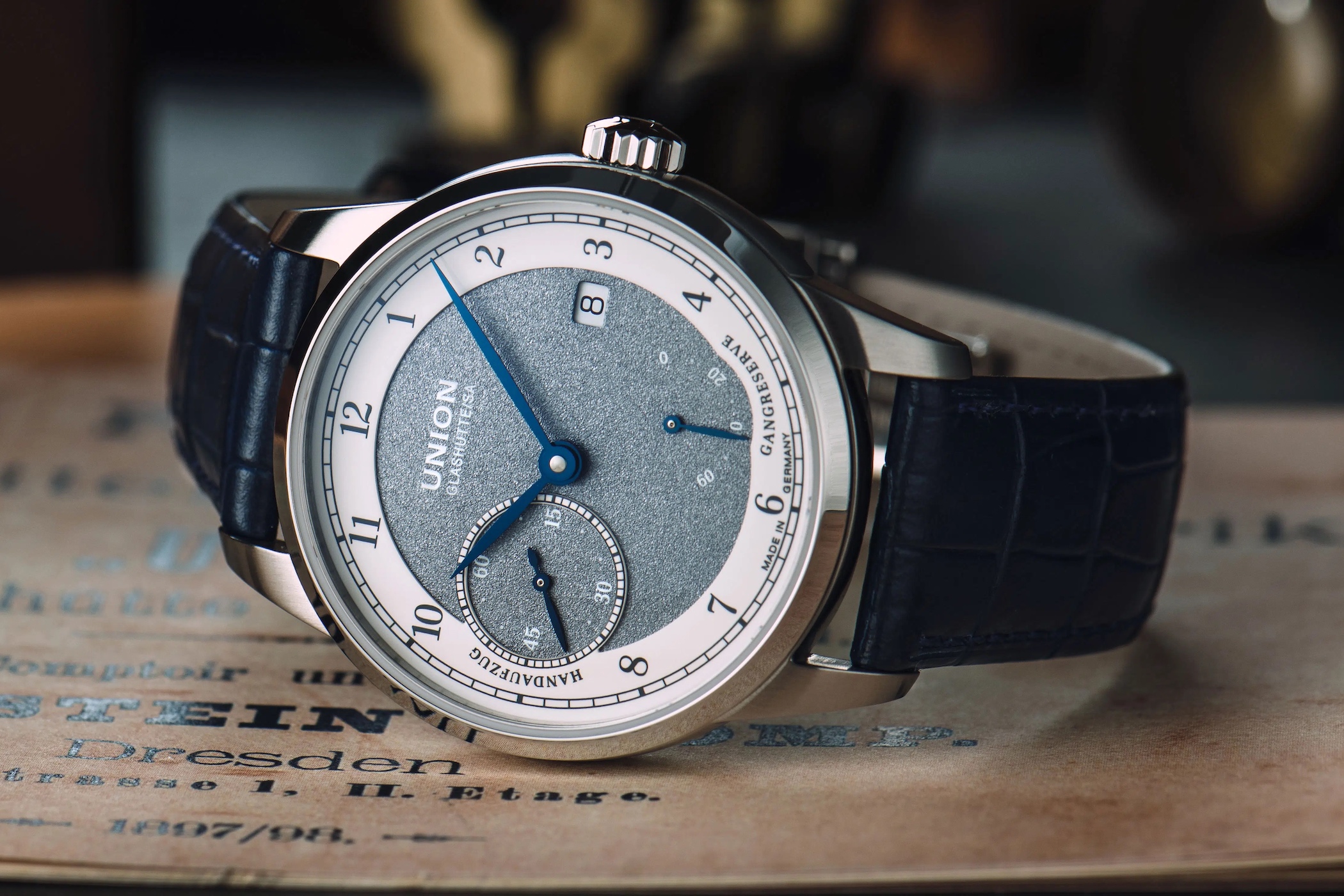 What struck us at first was the fresh and well-balanced design of the dial. The textured blue-green centre dial gives it a nice and contemporary look, with a white enamel chapter ring surrounding it. This chapter ring features a minute track in black, paired with Arabic hour numerals. On the left side of the dial is a small seconds subdial which blends in with the outer ring. Opposite that is the date window, with the power reserve positioned at 5 o’clock and dipping into the chapter ring. The leaf-shaped hands for the hour and minutes have been blued, as have the hands for the small seconds and power reserve display. Visible through the sapphire crystal caseback is the brand’s unique calibre UNG-56.S1. Developed in close collaboration with Swatch Group’s ETA, this hand-wound movement comes with a typical German three-quarter plate finished with Glashütte ribbing. And don’t make the mistake of thinking this is just a run-of-the-mill Swatch Group movement. It is in fact exclusive to Union Glashütte and comes with 20 jewels, runs at a frequency of 28,800vph and has a running time of 60 hours. The balance wheel is fitted with a silicon spring to improve magnetic resistance. The finishing is actually quite nice with blued screws, polished elements and golden engravings on the outer edge of the movement. 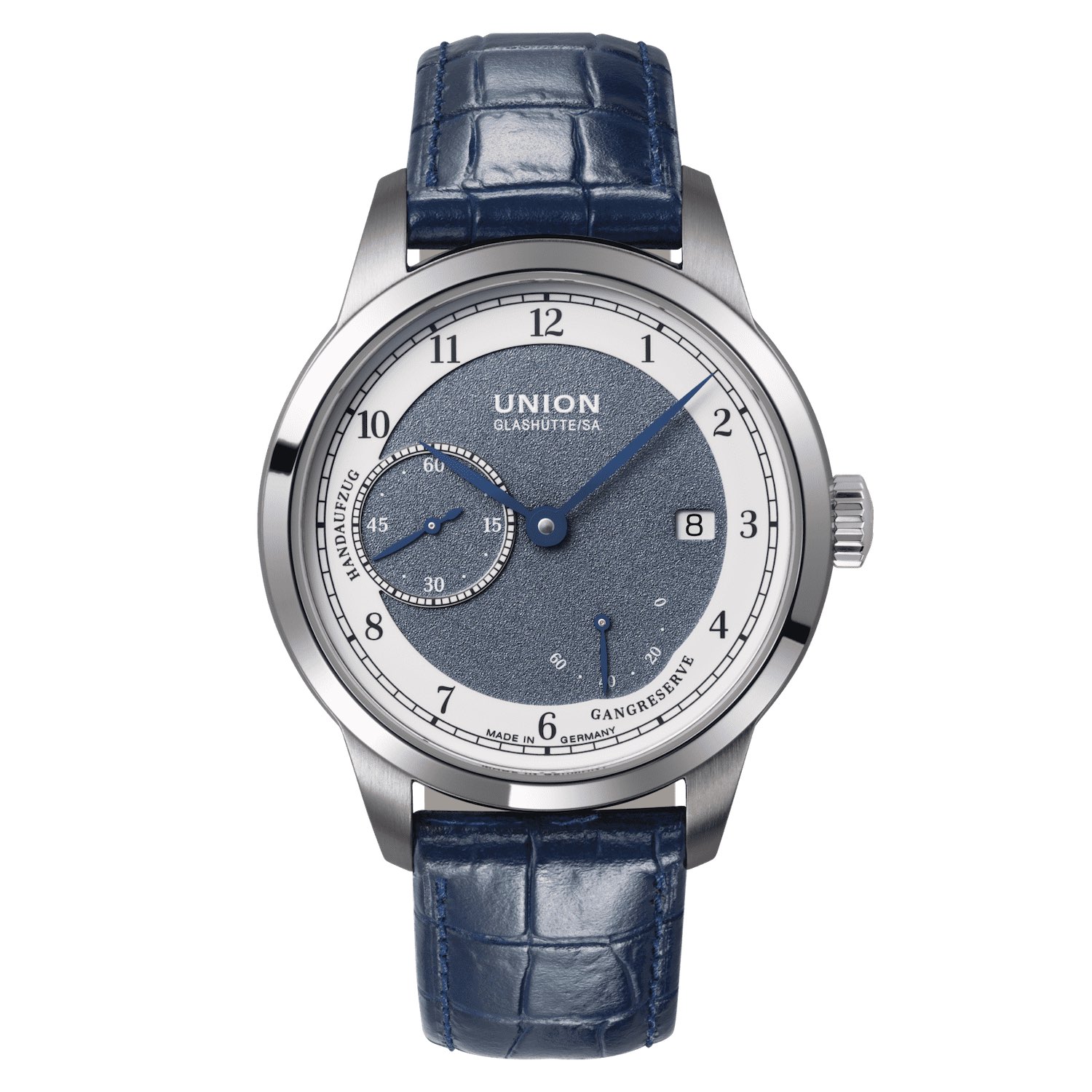 The Union Glashütte 1893 Johannes Dürrstein Edition Power Reserve is worn on a blue calfskin leather strap with an alligator-like embossed pattern and a double folding clasp. The watch retails for EUR 2,480 and it’s available through the brand’s retailers. It sounds like quite a fair deal considering the type of movement used and makes for a very nice everyday watch with that typical Glashütte design.