If the brand has been under everybody’s radar recently after the launch of the PRX collection (and rightfully so), Tissot is a watchmaker with a deep history. Born in 1853, the brand has long been involved in sports timing and chronograph watches. And with this in mind, the brand has released multiple accessible and attractive “Heritage” models modelled after glorious watches of the past, such as the Heritage 1973 Chronograph, the PRS 516 Automatic Chronograph recently or the Heritage 1948 Chronograph. Today, the brand looks even deeper into its archives and brings back a design of the late 1930s, a typical and charm-packed chronograph watch that features all of the traits of the era, yet in a modernized package that includes a deeply revised and competitive movement. Here’s the new Tissot Telemeter 1938.

Following its founding during the mid-19th century in the small Jura-based town of Le Locle, Tissot quickly specialised in manufacturing accessible yet precisely crafted pocket watches – first as a so-called comptoir (which assembled parts) and then as a manufacture. In 1930, Tissot merged with Omega (an early collaboration leading to the Société Suisse pour l’Industrie Horlogère (SSIH), and that will be crucial in the creation of the Swatch Group), which opened new perspectives to the brand, specifically in terms of chronograph watches and timing instruments. 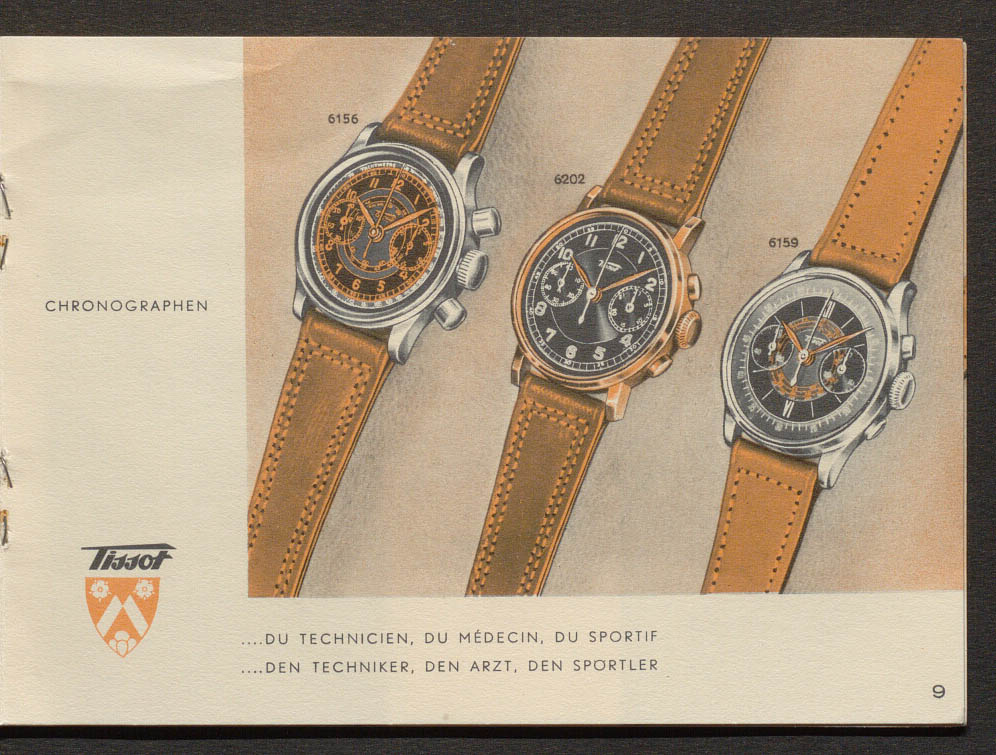 Tissot has been over the years an official timekeeper for many sports events and its first engagement as an official timekeeper was in 1938 where they timed a series of Ski races in Villar, near the company’s home town in the Jura mountains. Among the instruments seen during this era were typical timing chronometers but also wrist-chronographs, such as the 1938 mono-pusher, multiscale watch you can see below.

Typical of the period, this large 37mm chronograph watch features a gilt/black dial with large Arabic numerals, as well as multiple scales – a snailed tachymeter in the centre and a telemeter at the periphery. This very watch, and more of the same era with almost identical designs (some with double-signed dials, Omega and Tissot) is the source of inspiration for a re-edition, the present and attractive Tissot Telemeter 1938… But, as often with the brand, this vintage-inspired watch has a few tricks under its sleeve. 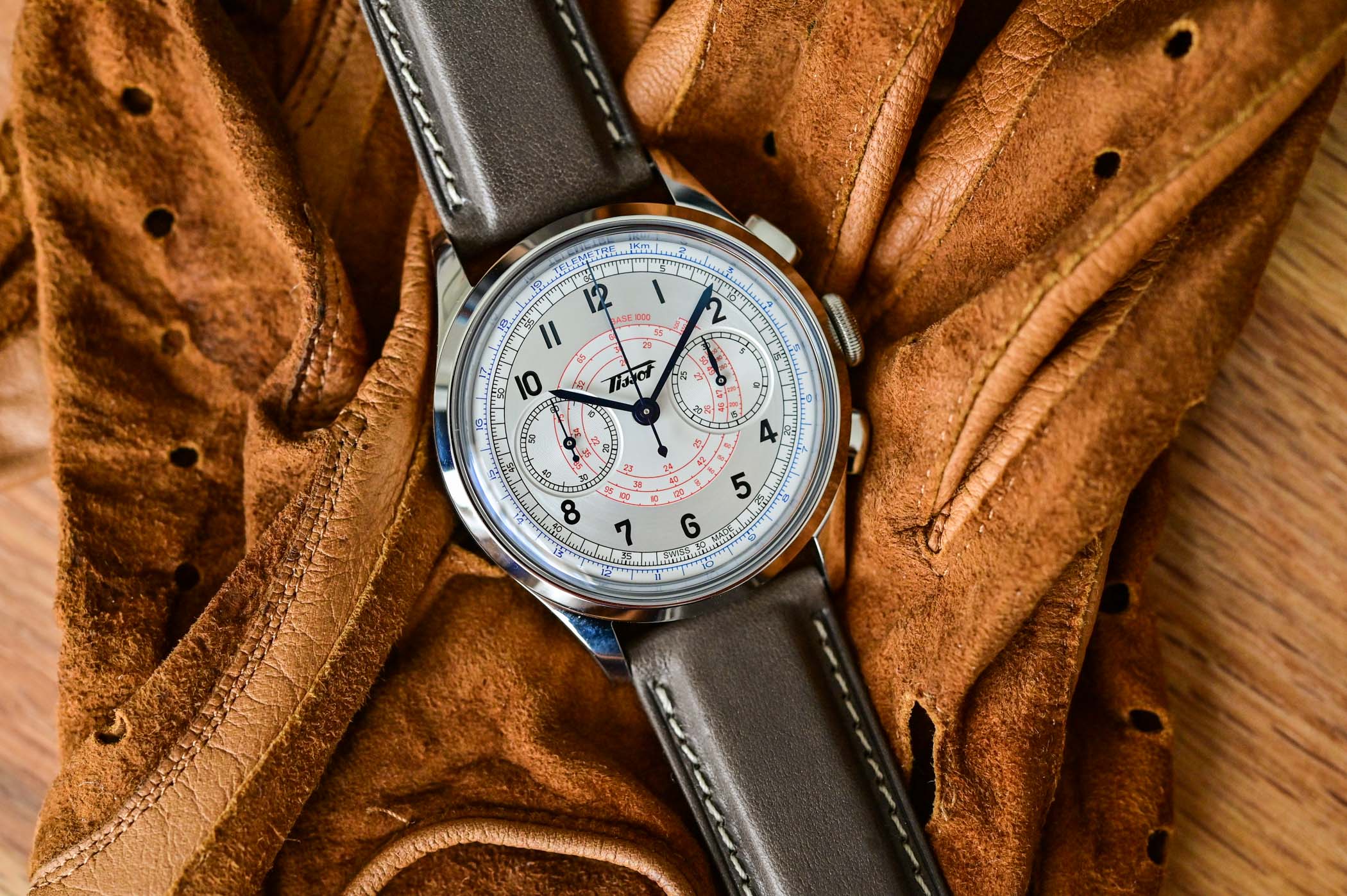 What we’re looking at today is a pair of relatively accessible, well-equipped chronograph watch with an unmistakable retro feel. For once, we’re not diving into the golden era of vintage watches – namely the 1960s – but deeper into history, with the undeniable charm of the pre-WWII chronograph watches. At first glance, the resemblance with the vintage late-1930s watch pictured above is clear. The connection between past and present is indisputable and, overall, Tissot has done an excellent job in reproducing the design of the past. Still, with the evolution of trends and mechanics, the new Heritage Telemeter 1938 is not entirely faithful to the original and brings some notable updates. 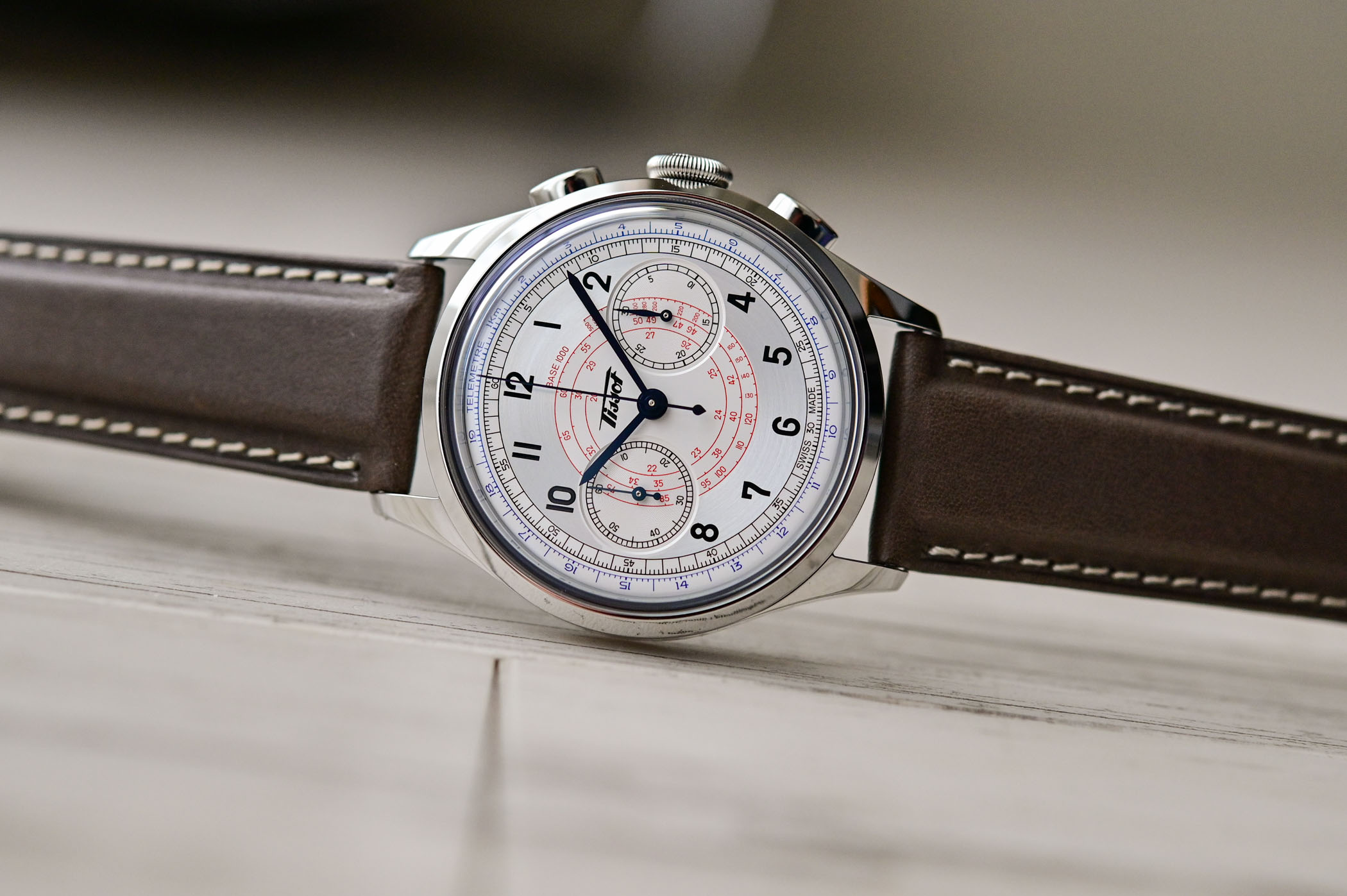 First of all, there’s the case. Made of stainless steel, with a combination of polished surfaces on the upper parts and brushed accents on the sides, it sticks to the fluid and elegant lines of the past. The watch is domed by a raised, box-shaped sapphire crystal that flows with the angled polished bezel and a pair of elegantly designed oval pushers on the side are used to actuate the chronograph function. In the same vein, the large crown is thin, rounded and finely fluted. The rest of the case is classic yet very pleasantly executed, with a see-through caseback and a water-resistance of 30m – a bit limited, but diving isn’t the vocation of such a watch. There’s an unquestionable sense of quality to this watch, with neat junctions and reassuring heft.

Talking about this, the proportions of this Tissot Telemeter 1938 aren’t exactly vintage anymore. From a period-oversized 37mm case on the vintage model, we’ve now moved to a 42mm diameter and about 15mm height. Not specifically oversized considering modern standards, but a 40mm case would have maybe been a bit more relevant in this retro-inspired context. At the same time, Tissot’s target group isn’t necessarily attracted by smaller cases… To each his own, and despite the size of the case, the watch remains comfortable and balanced on the wrist. 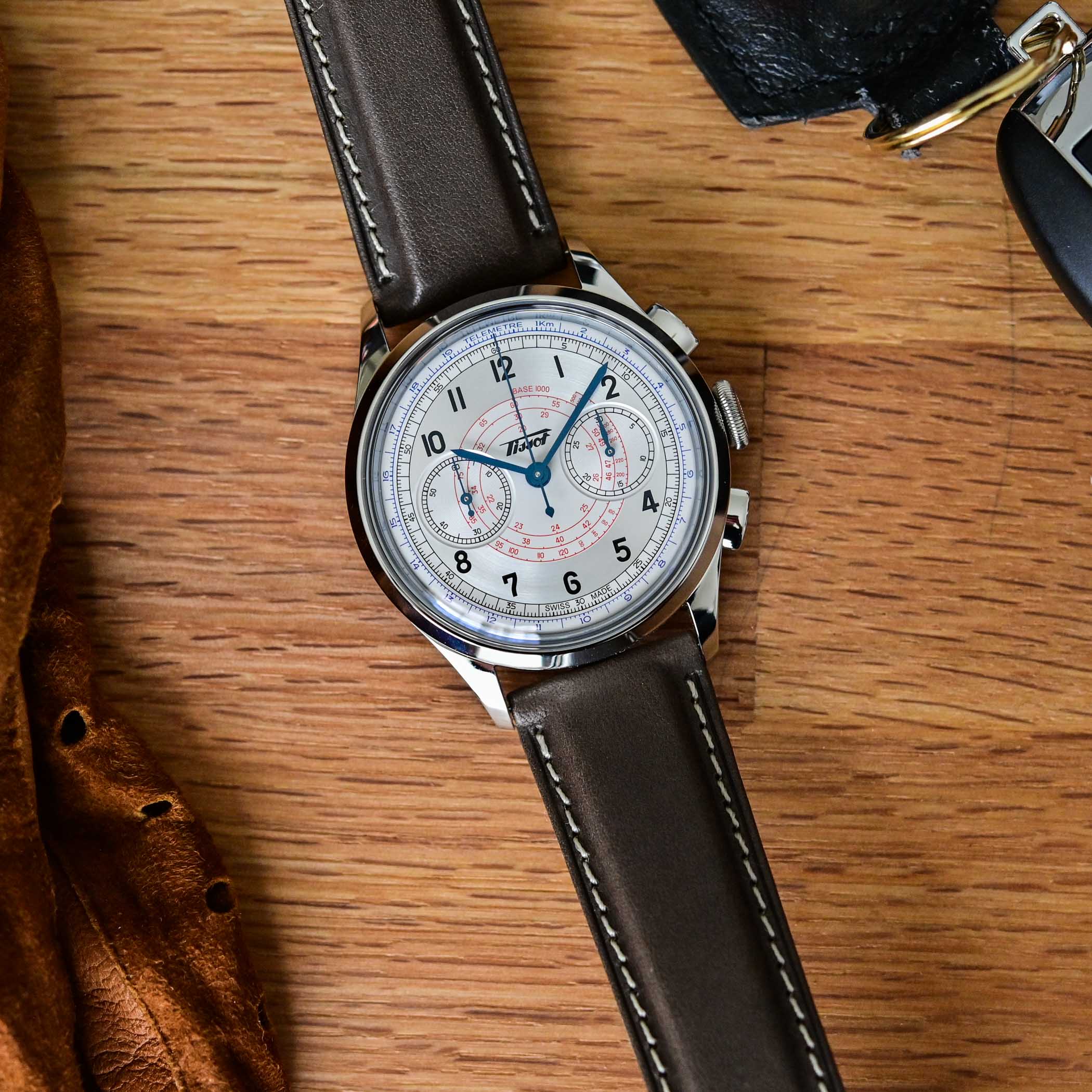 As for the dial, Tissot has done a great job in recreating all the details of the original 1930s models. The Tissot Telemeter 1938 is complex, handsome and truly interesting to look at. Available in two (very) different styles, both respectful of the codes of the era, the display and layout are identical on both editions. A pair of glaive-shaped hands indicate the time and a small running seconds sits at 9 o’clock. Then, it’s all about a succession of different tracks to perform measurements. If we look at the silver edition, right in the centre and printed in red on a snailed track, you’ll find a tachymeter scale to record average speeds. Then are the large, bold Arabic numerals indicating the hours and framed by a black-printed precision minute scale, with 1/4th of a second increments. Finally, printed in blue on the periphery, is a telemeter scale that is used to measure the distance between an event you see first and hear second – a lightning strike, for example. You can read more about the different scales in watchmaking in this article.

The silver edition of the Tissot Telemeter 1938 is discreet yet with very good contrast. The dial is a so-called two-tone, with a matte centre and periphery and a lightly brushed hour chapter ring. In this version, the hands stand out in blue. For a more restrained look, it is worn on a dark brown smooth leather strap. The second version, even if completely accurate historically speaking, is bolder and more striking, due to the glossy “gilt” black dial with all logos, scales and tracks printed in gold colour. In the same vein, all hands are gold-coated, resulting in a very warm and present dial – but also a very charming one. Here, the strap is light brown leather. 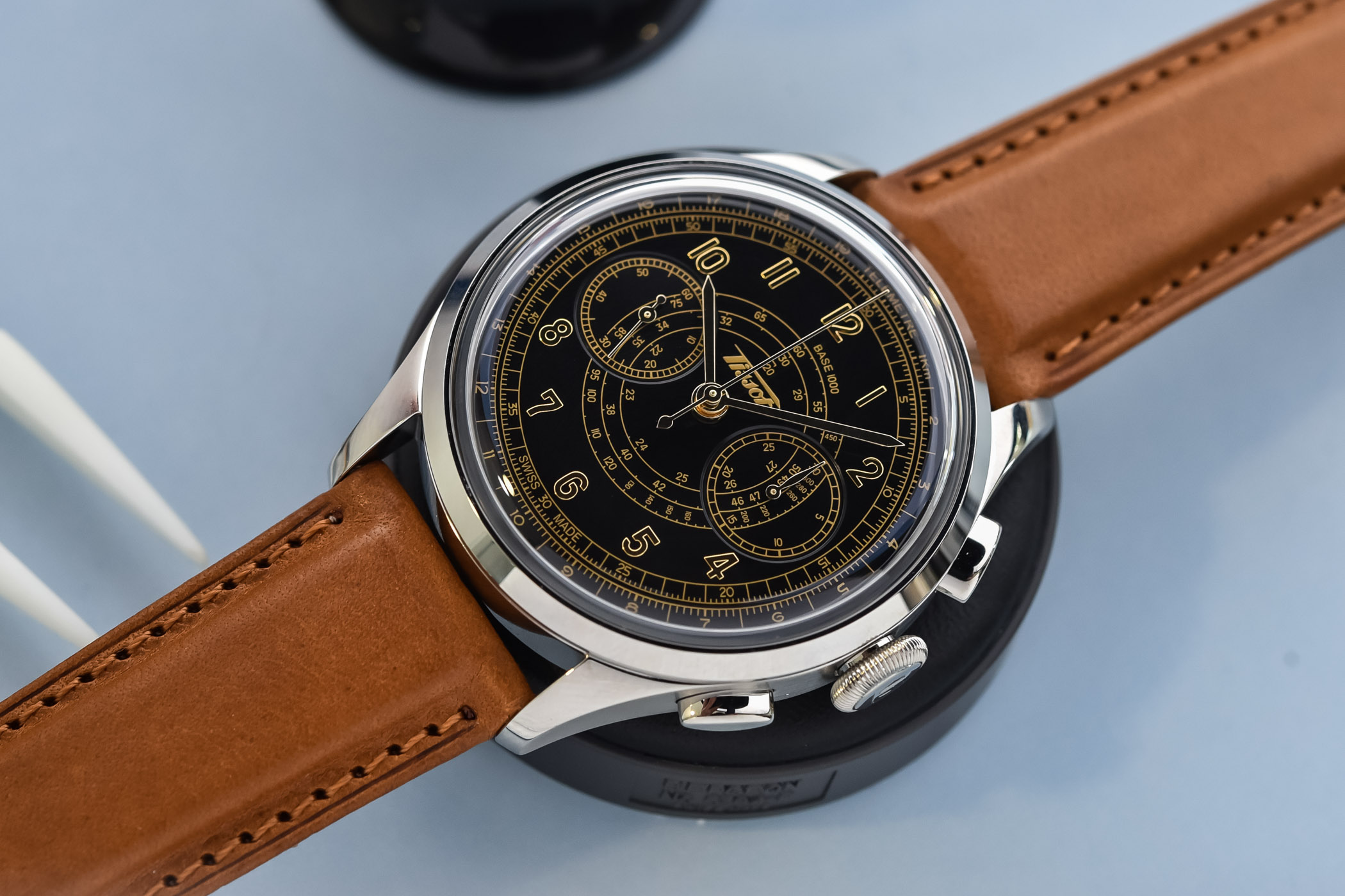 Under the see-through caseback is a movement that both pays tribute to the past of the brand/group, but also comes with significant evolutions. The calibre Valjoux A05.231 that beats inside is closely linked to the venerable 7750 architecture, sharing its cam-level design and its legendary robustness. First of all, it relies on a more elegant bi-compax layout, with the seconds at 9 o’clock and a 30-minute counter at 3 o’clock. Then, it underwent a series of optimisations, the first being an elongated power reserve of 68 hours (vs. 48h on a standard 7750). Then, it is fitted with an anti-magnetic Nivachron hairspring. Finally, it features a variable inertia balance, without an index for the regulation (both solutions are also seen on the Powermatic 80, an evolution of the venerable 2824). The back reveals a movement with perlage on the bridges and an openworked, Tissot-signed rotor. 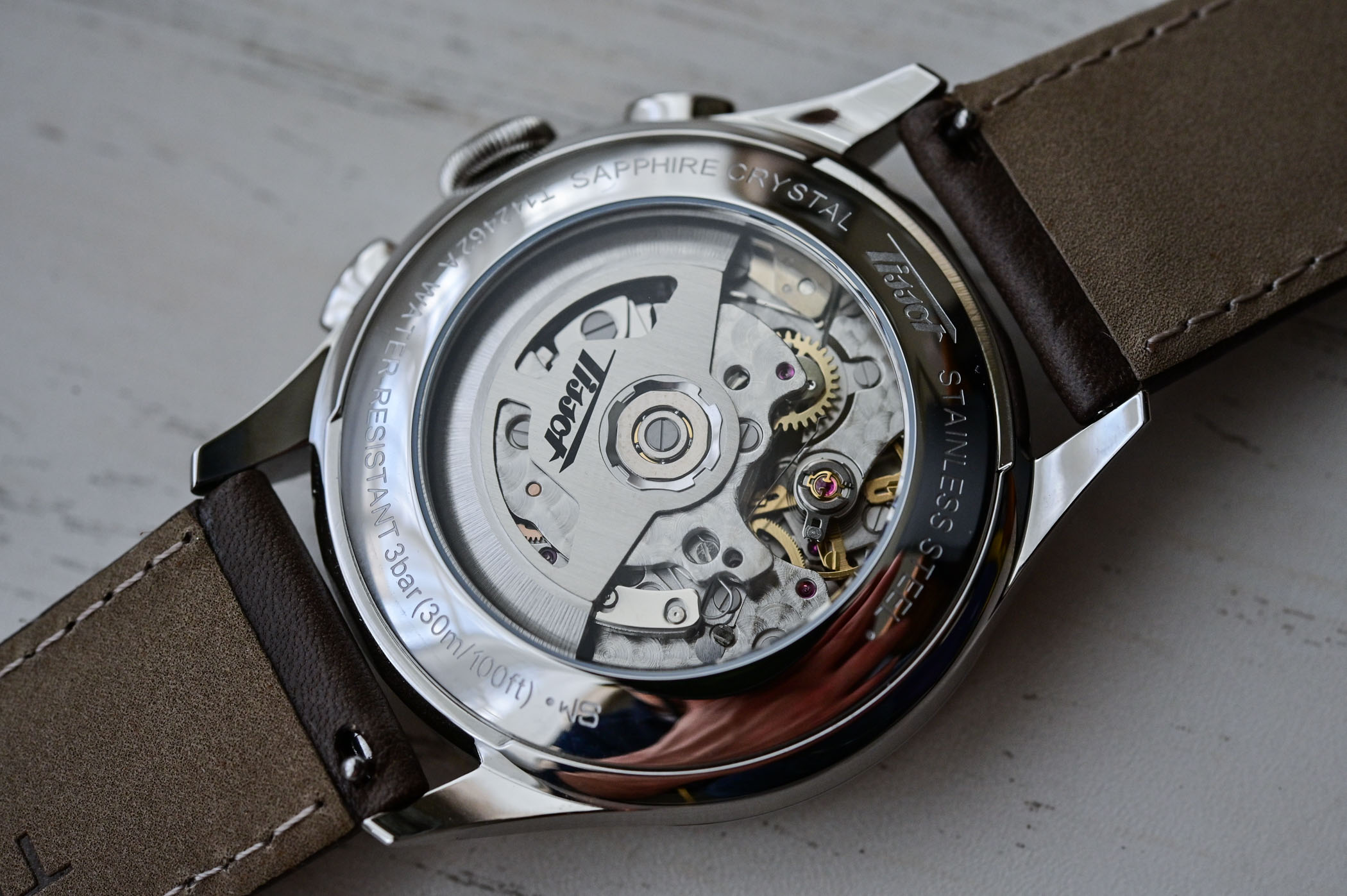 The Tissot Telemeter 1938 will soon be released as part of the permanent collection and will be offered at the competitive price of CHF 1,895 (without taxes) or EUR 1,995 with taxes.