The Horological Brothers, Tim and Bart Grönefeld, need little to no introduction anymore – at least if you’re a bit into independent watchmaking. Some of the most talented watchmakers of their generation, and often regarded as the top-end of the watchmaking scene in The Netherlands, the Brothers are continuing their direction regarding design and movement construction, starting with the Grönefeld 1941 Remontoire of 2016. This delightful constant force watch will be followed by the simpler, more focused and automatic Grönefeld 1941 Principia, and recently the discreetly released Decennium Tourbillon. And today, with the same design principles, the brand releases its first-ever chronograph, the Grönefeld 1941 Grönograaf. And yes, the movement is still a true feast for the eye.

Throughout their career, The Horological Brothers Bart and Tim have produced a variety of unique mechanisms including a tourbillon minute repeater, a jumping seconds, a flying tourbillon with hacking seconds. Yet, the chronograph is one of the rare complications they’ve never touched. Keep in mind that a chronograph is, with a minute repeater, one of the most complex mechanisms to develop and construct. The Brothers needed a bit of time to conceive this watch, but indeed, here it is; the 1941 Grönograaf. 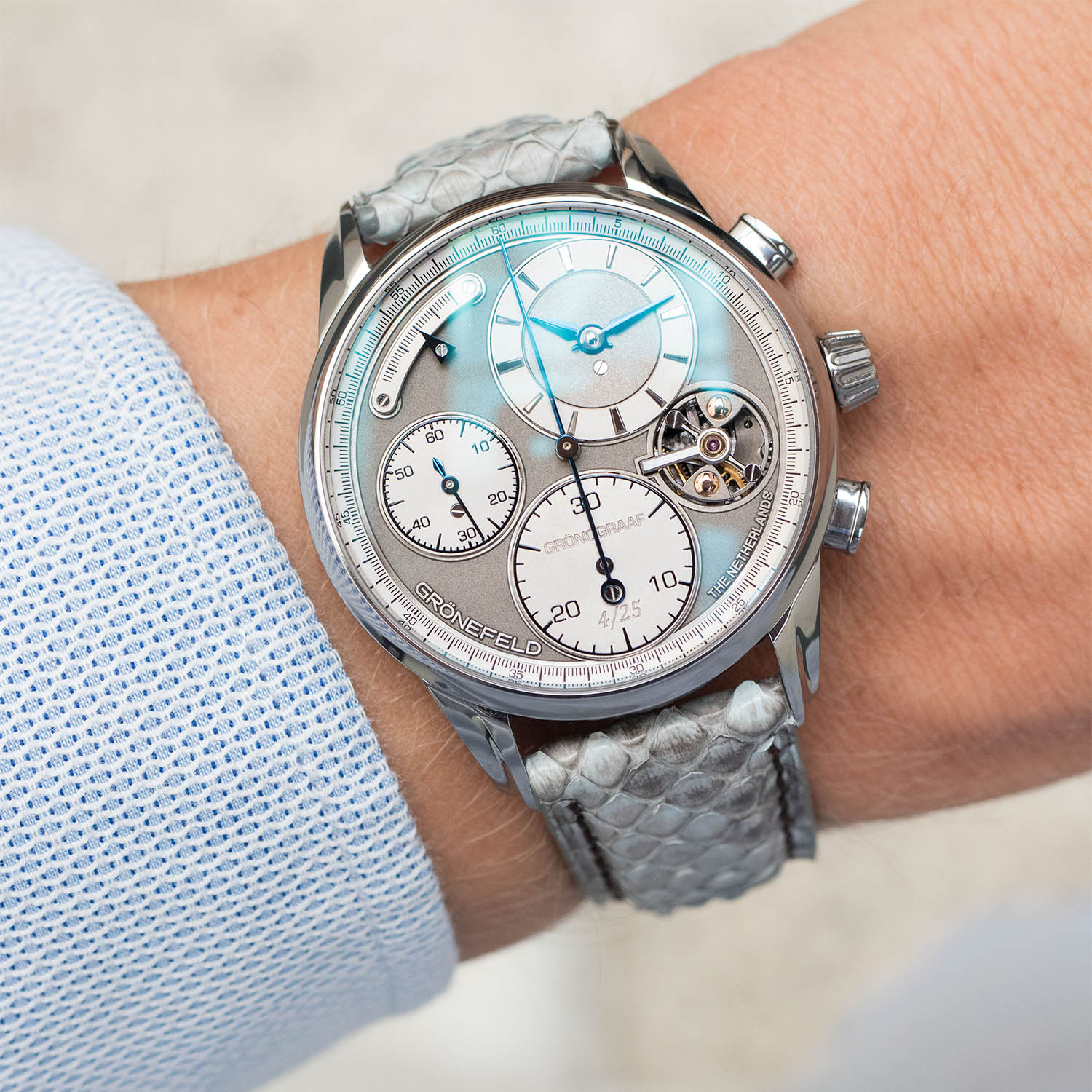 Visually, the 1941 Grönograaf is unmistakably part of the 1941 family, sharing the same case design and an identical style for the dial as the previous watches… With more complexity, being more loaded when it comes to the indications. As such, the Grönograaf (a contraction of Grönefeld and Chronograaf, the Dutch word for chronograph) comes in the smooth and elegant 1941 case, with entirely polished surfaces and complex lugs, with a signature recessed part inside. The watch measures a very restrained 40mm diameter, and the case is a mere 11.3mm in height – which are about perfect proportions if you ask me. 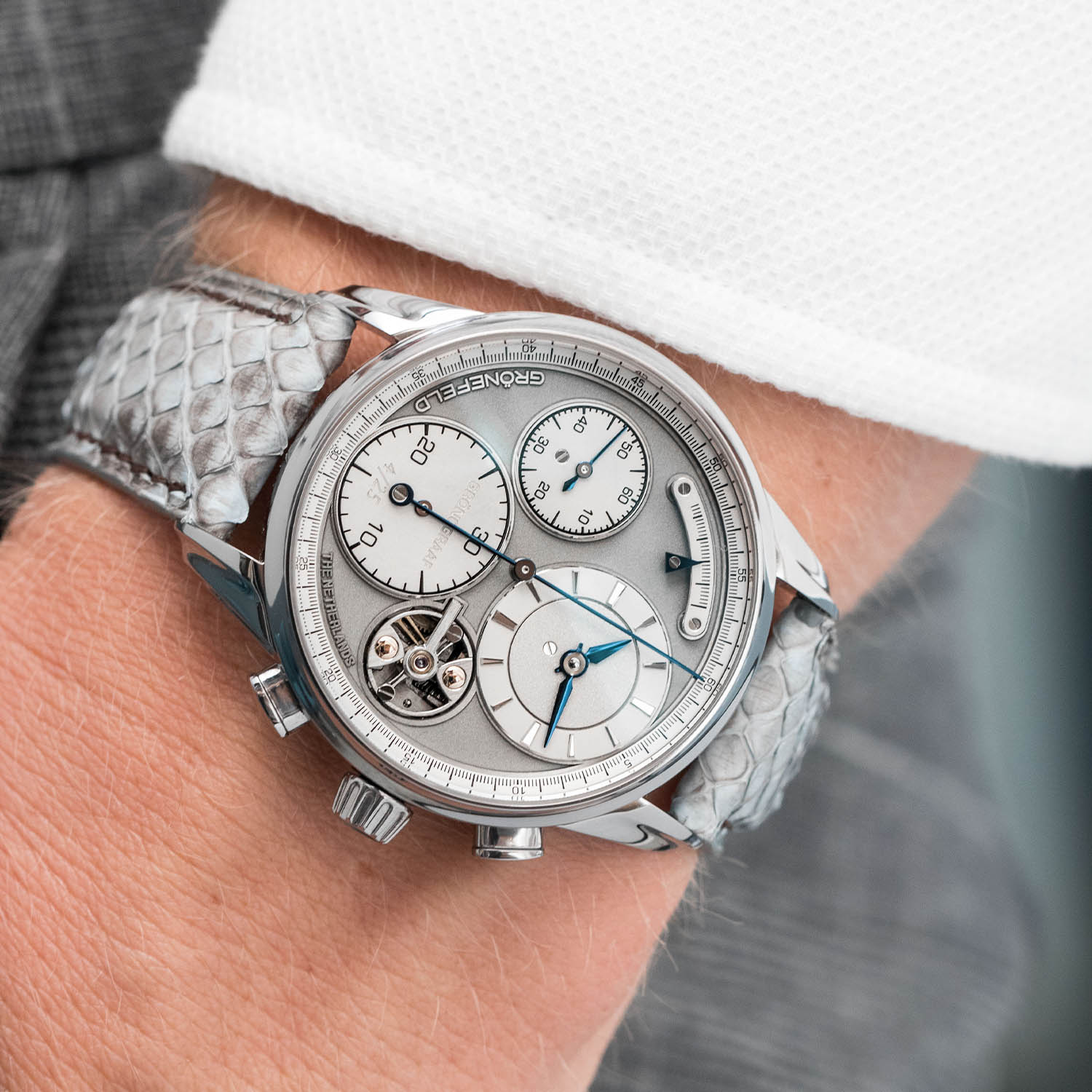 The rest of the case has been adapted to meet chronograph requirements, meaning that next to the classic crown of the collection, you’ll find two rectangular pushers. The watch is presented in two editions, only differing regarding the material of the case, which can be stainless steel or tantalum – the edition that will certainly be the most coveted. The strap you see in the images here is just an illustration, and you can choose approximately everything that will suit your tastes – you can see examples at this page.

The dial is typical Grönefeld, playing on levels, textures and sense of depth. In this instance, it is reminiscent of the Brothers’ earliest creations, the One Hertz and the Parallax Tourbillon. The base of the dial is frosted and satin-grained stainless steel, with raised indications read over rhodium-plated sub-dials and elements. All the functions are indicated by Lancette or Breguet hands in flame-blued steel with mirror-polished centres, as well as faceted trapezoidal indexes. The display consists of an off-centred hours/minutes dial at 1 o’clock, a small seconds at 9 o’clock, a power reserve at 11 o’clock, a central chronograph second hand and a 30-minute counter at 6 o’clock. And there’s something special at 4 o’clock… More on that in a bit. 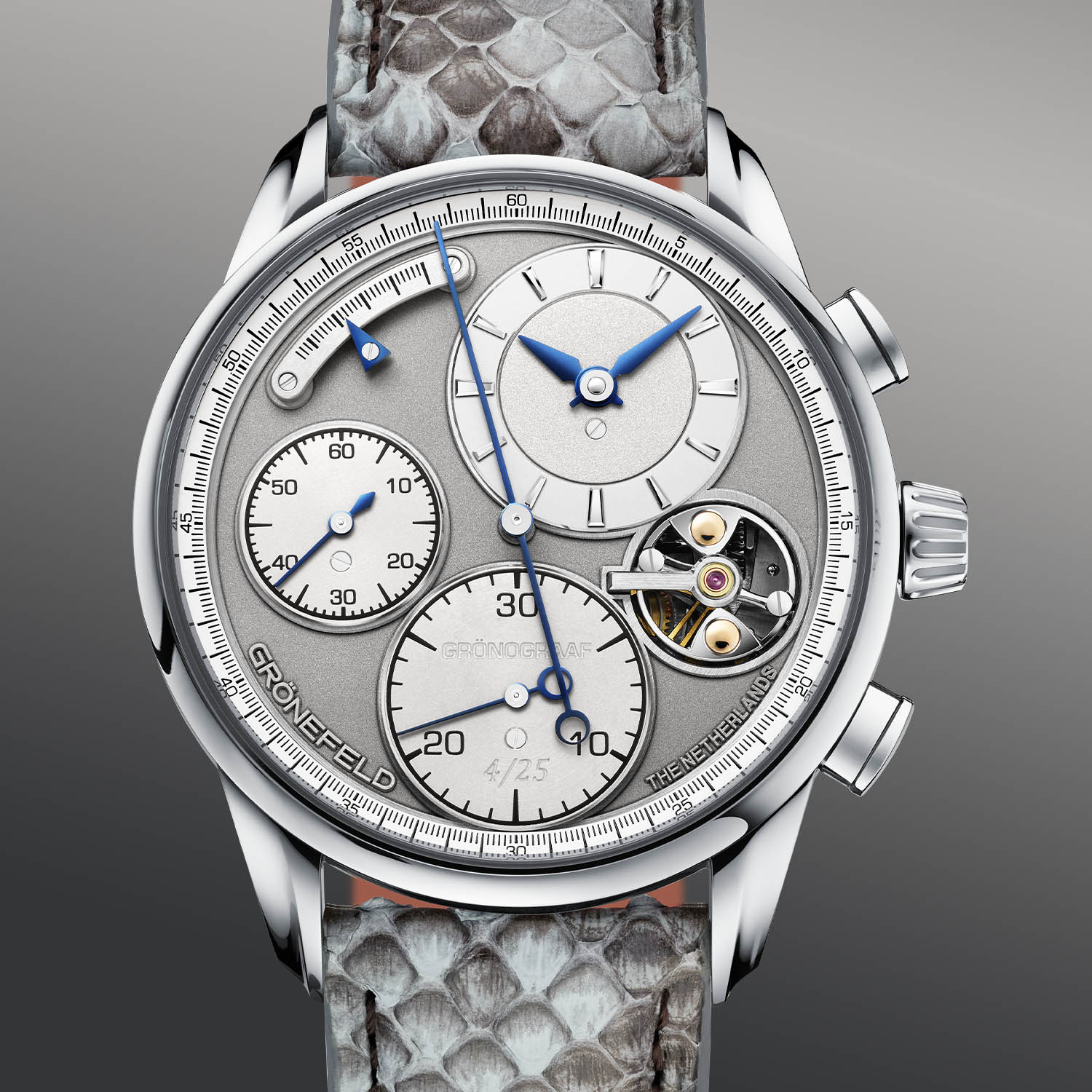 Let’s turn the Grönefeld 1941 Grönograaf over… and here comes the true gem, the new calibre G-04, designed, manufactured, finished and assembled by the Brothers and their team, in Oldenzaal, The Netherlands. The movement has been conceived as a typical Gronie’s take on the classic chronograph, knowing a hand-wound, column-wheel and lateral coupling architecture – something Valjoux 72 and Lemania fans will certainly appreciate. It has thus been improved technically over older architectures and comprises no fewer than 408 parts. 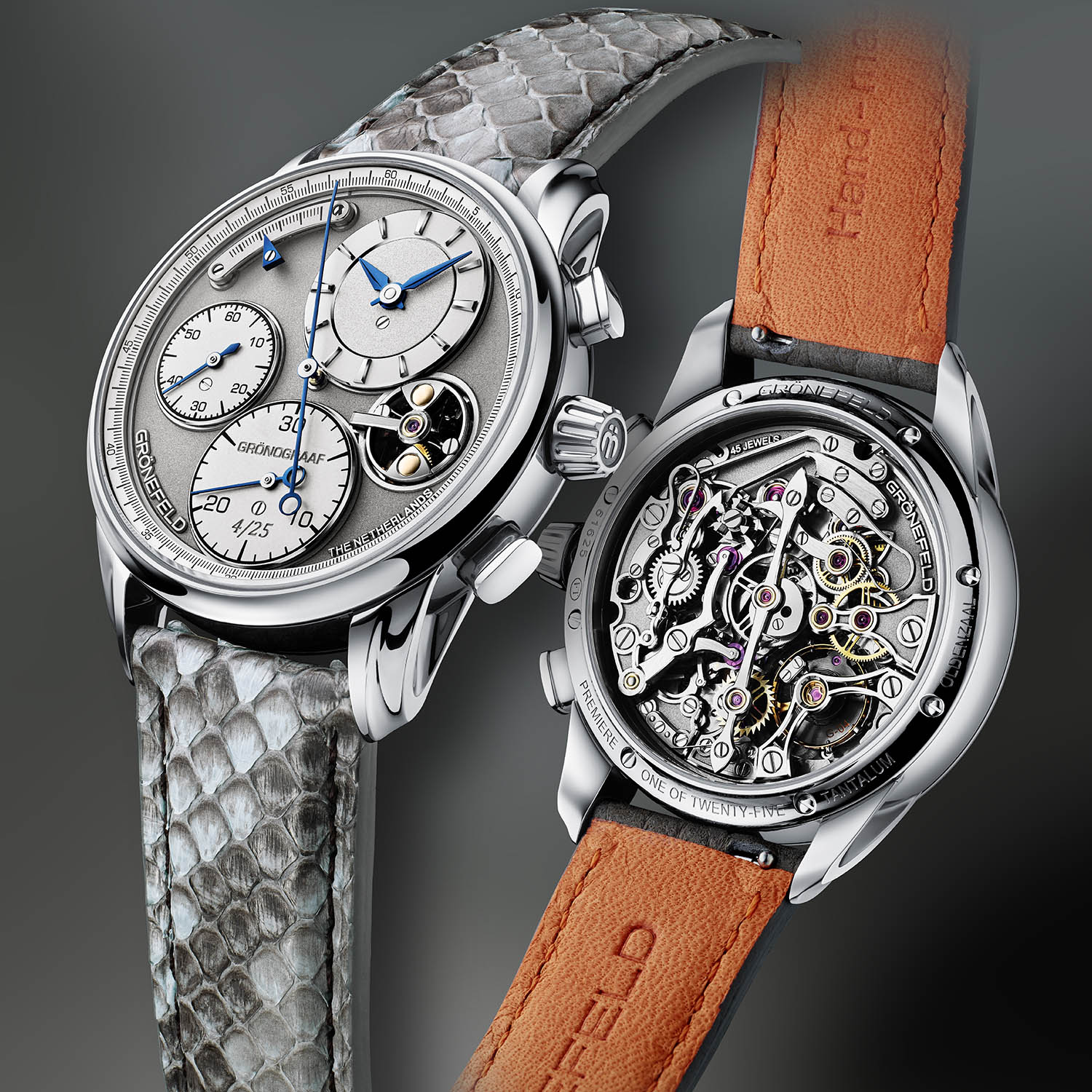 As explained by the brand, “chronograph movements are often subject to harsh forces that can sometimes scar hammers and bend hands,” when the start-stop-reset sequence is actuated. To address the issue, “The Horological Brothers conceived a less aggressive system, a ‘soft reset’ mechanism. A centrifugal governor, positioned at 4 o’clock, typically seen on minute repeaters, slows down the reset function, thereby proving kinder to components while delivering a fascinating spectacle in the process. The governor includes two solid gold weights.” Also, “depending on the position of the heart-shaped cams for the counter hands, the relevant minutes and seconds hands rotate clockwise or counterclockwise, heightening the sense of mechanical theatre.” Finally, the 30-minute counter, located at 6 o’clock, features an instantaneous jumping minutes. 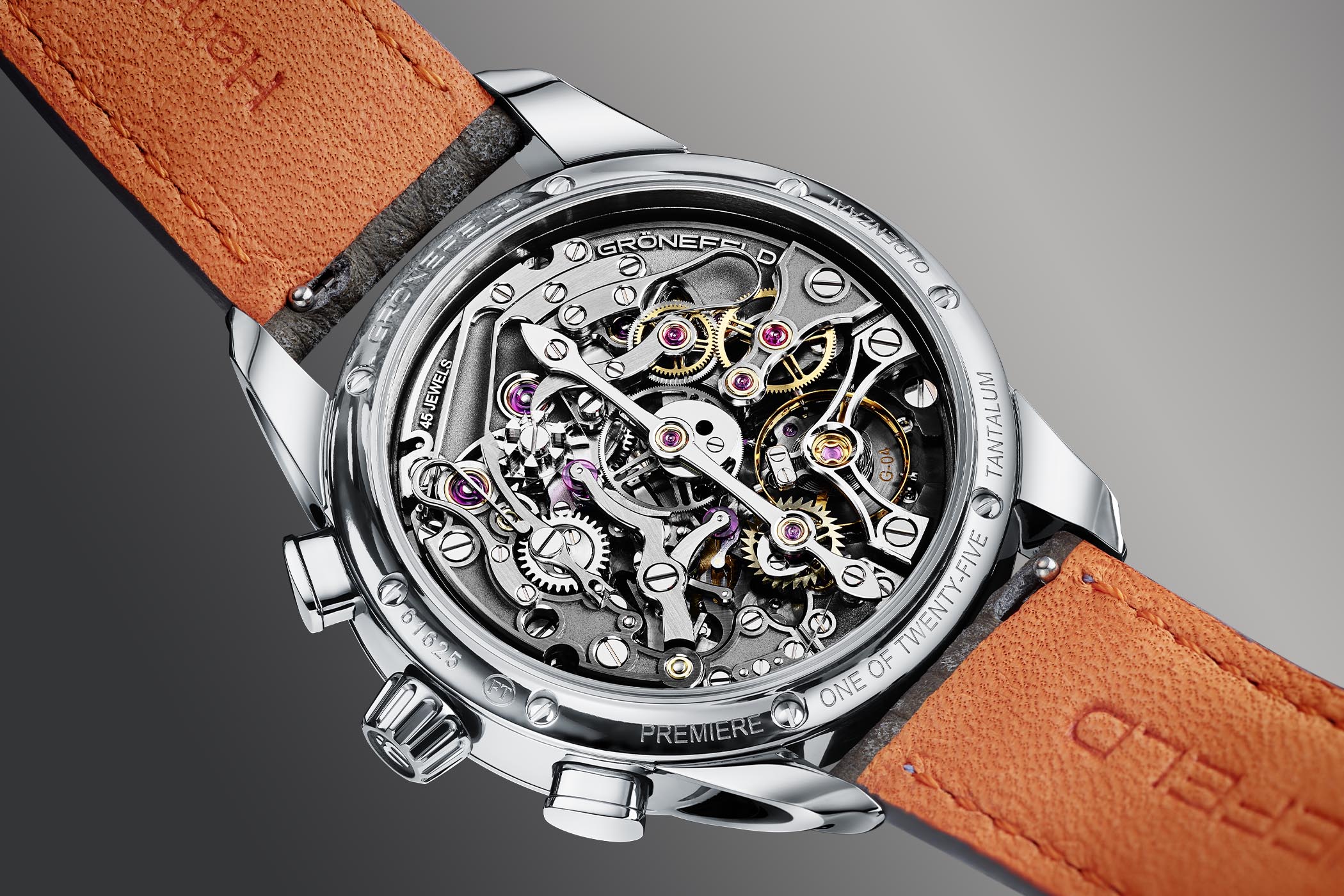 In addition to this, and once again in order to bring smoothness and reliability to the movement, the Grönefeld 1941 Grönograaf features ruby jewelled hammers to lessen the impact when returning to zero. And the keyless works features a conical winding pinion and crown-wheel, delivering a smooth winding action. As for the rest of the movement, we’re talking about a classic hand-wound architecture with variable-inertia balance wheel with timing screws, and a free sprung balance spring with Phillips terminal overcoil curve, beating at a frequency of 3Hz. The barrel delivers 53 hours of power reserve. 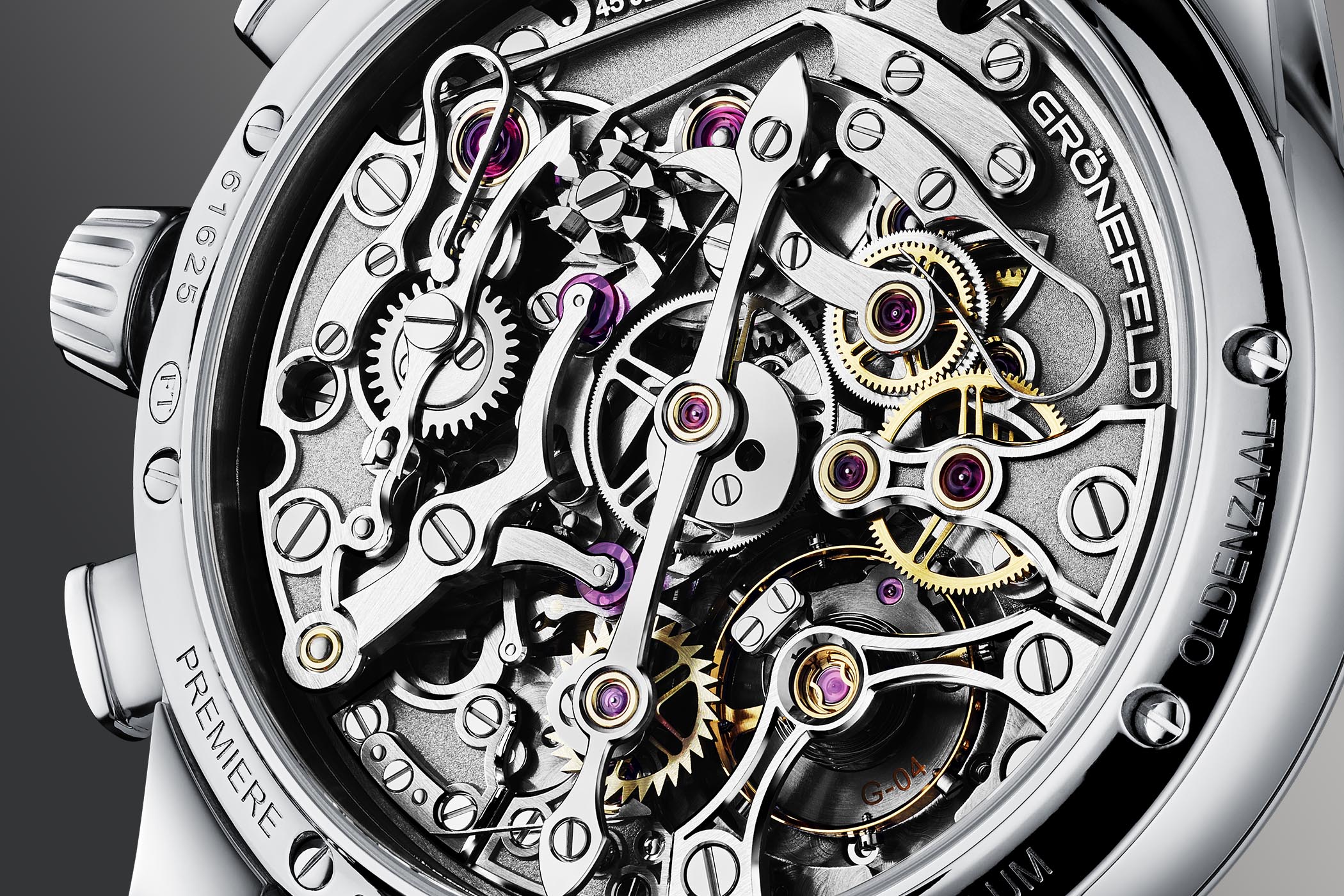 As always with Bart and Tim, the decoration of the Grönefeld 1941 Grönograaf is exceptional. The mainplate is embellished with spotting, while the bridges are formed of stainless steel, polished by hand. Moreover, the bridges have micro-blasted centres, circular graining on the top and feature various engravings in relief. The heart-shaped cams, the elongated chronograph bridge, the gold chatons and the screw-heads are embellished with black polishing, performed in the traditional way using diamond paste on a tin plate. And the design is, as usual, ultra-complex, aerial, technical and modern, while respecting the codes of Haute Horlogerie.

The Grönefeld 1941 Grönograaf will be released in two limited editions of 188 pieces in stainless steel and 25 pieces in tantalum. The price will be EUR 155,000 in steel and EUR 165,000 in tantalum. For more details and to place a reservation, please visit www.gronefeld.com.