As of now, most of you should be pretty familiar with the Birch concept from Grand Seiko. First released in early 2021 under the name White Birch, with its complex dial texture and bold silvery-white colour, this watch marked the arrival of the Evolution 9 series as a true member of the GS family. And, in all fairness, the SLGH005 was arguably one of the most important and striking watches of 2021. We’ve later seen several additions to the series, with the White Birch Spring Drive SLGA009 and the Green Birch SLGH011. And now, it’s time for a black dial and titanium edition to be released, the Grand Seiko Night Birch SLGH017.

Let’s first take a little tour back in time. Last year, Grand Seiko released a watch that will become one of the main talking pieces of 2021, a striking model with a complex dial, a newly designed case and an innovative hi-beat automatic movement, the White Birch SLGH005 – a watch that we’ve already extensively reviewed here, and also filmed here. We’ve also reviewed its Spring Drive counterpart here, the SLGA009, which feels at first sight to be just a movement update but actually shows multiple differences on the dial and case compared to the classic White Birch. Finally, the brand released a few months ago a boutique-exclusive model, the Green Birch SLGH011. Note that all these models are made of stainless steel.

These watches, alongside more models released at Watches and Wonders and related to sports, form the so-called Evolution 9 collection. What we’re looking at here is the latest interpretation of the Grammar of Design, a series of rules created by Taro Tanaka, designer of the brand, in 1967 with the 44GS model. The idea, without denying the original concept, was to improve most aspects including the thickness of the case, the ergonomics and the overall elegance and refinement. 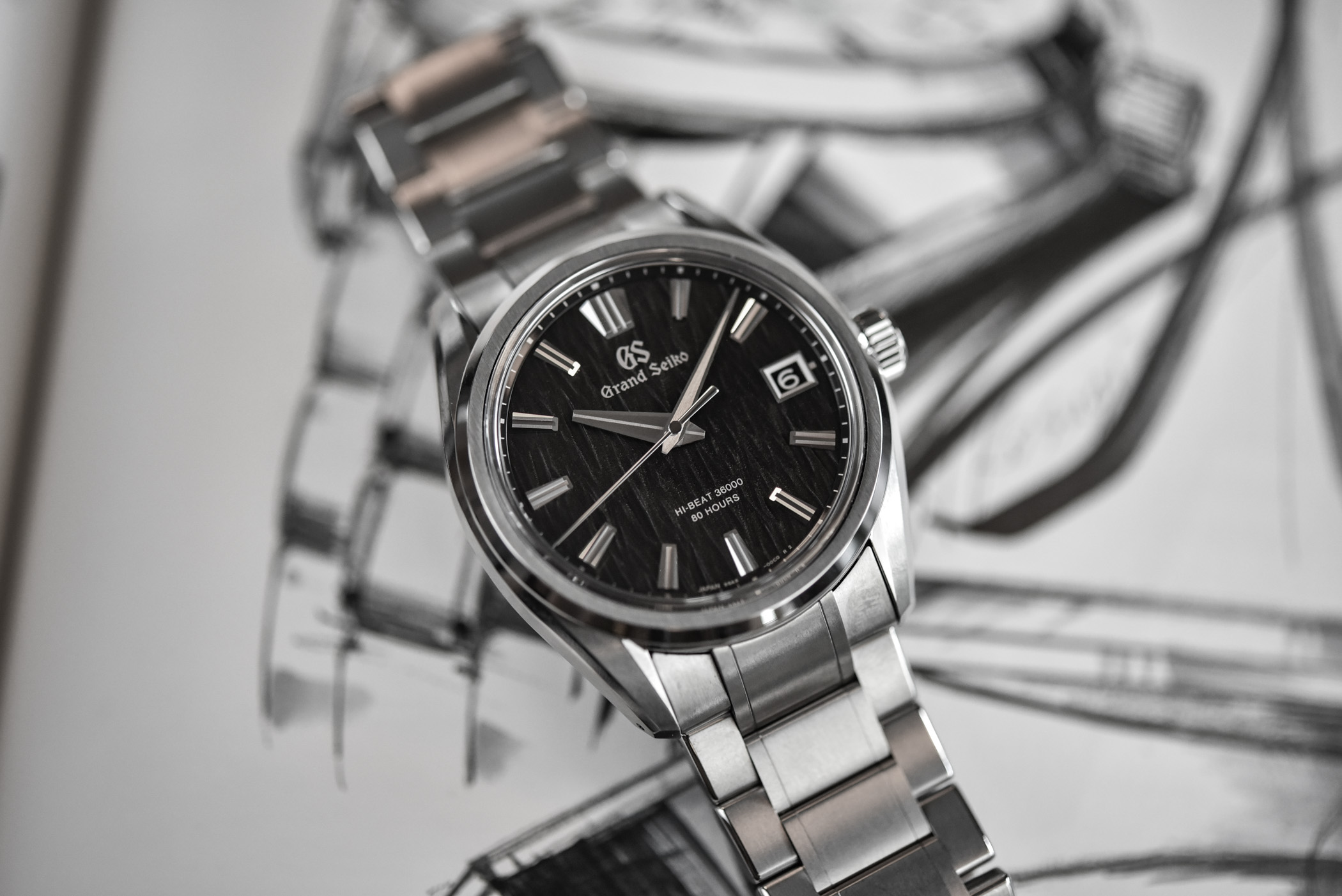 Now, in addition to the White Birch and Green Birch, we have the new Grand Seiko Night Birch SLGH017 – or, if you prefer, you can also call it Black Birch. At first, the watch could appear as a simple evolution of colours, with the silver or green dial replaced by a black dial. Well, as we’ve seen when comparing the Automatic and Spring Drive Birch watches, but also when taking a closer look at the Green SLGH011, the brand loves to change some of the details. And the Night Birch isn’t only a new colour. 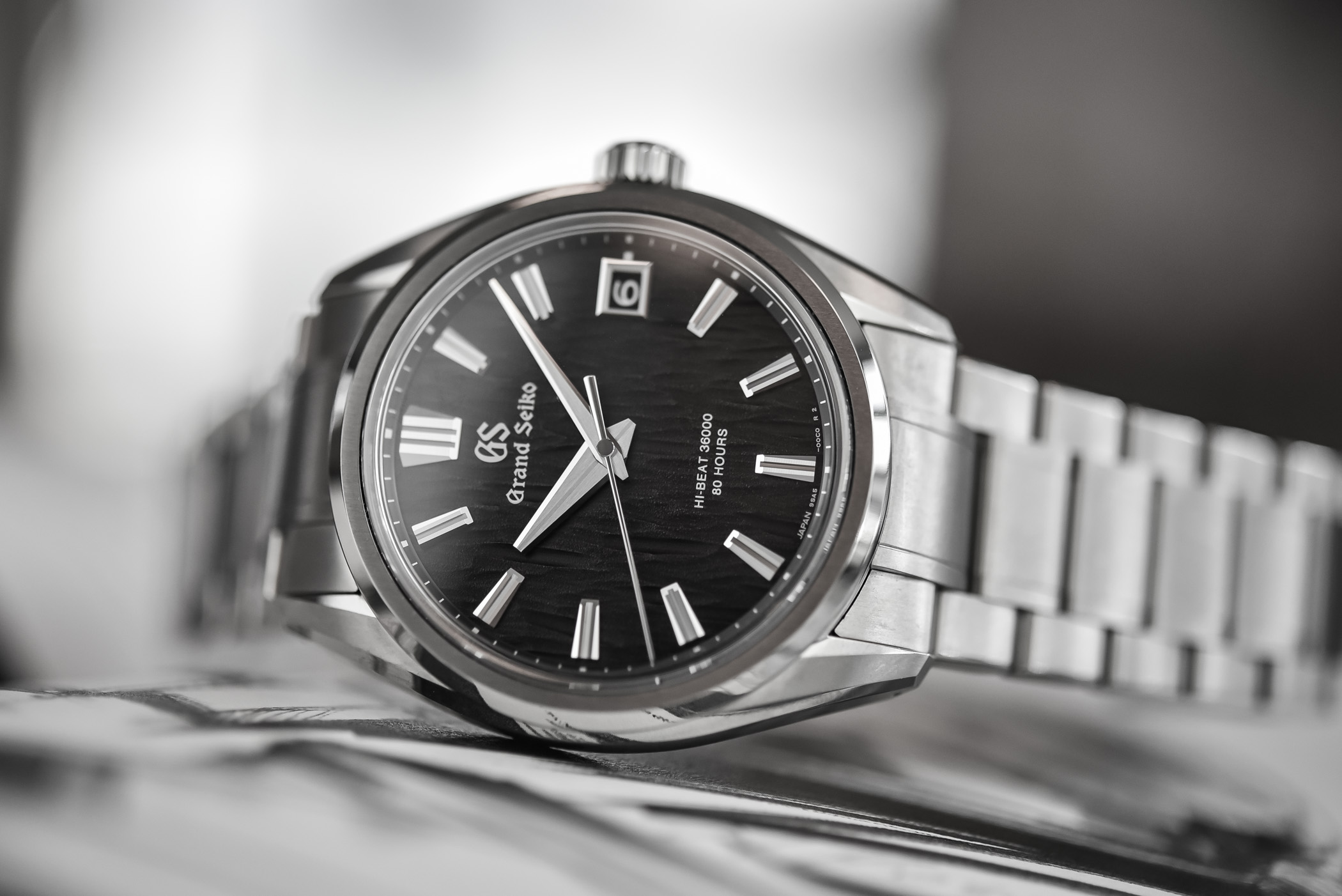 The most important update on this new Grand Seiko Night Birch is the use of high-intensity titanium for the case and bracelet. The proportions, shapes and finishings are all identical, however. It means a watch that is, in most aspects, the same as the White or Green Birch models, with a 40mm diameter, a thickness of 11.7mm and a fairly controlled lug-to-lug measurement of 47mm. The case retains the same combination of brushed surfaces on the flanks, polished accents on the sides of the lugs (of course executed with the Zaratsu technique) and a bezel with a polished bevel and vertically brushed top surface. Water-resistance is rated at 100m with a screw-down crown, and the sapphire crystal on top is box-shaped, with an anti-reflective coating. Nothing new here, it’s all the same as the previous Birch watches. 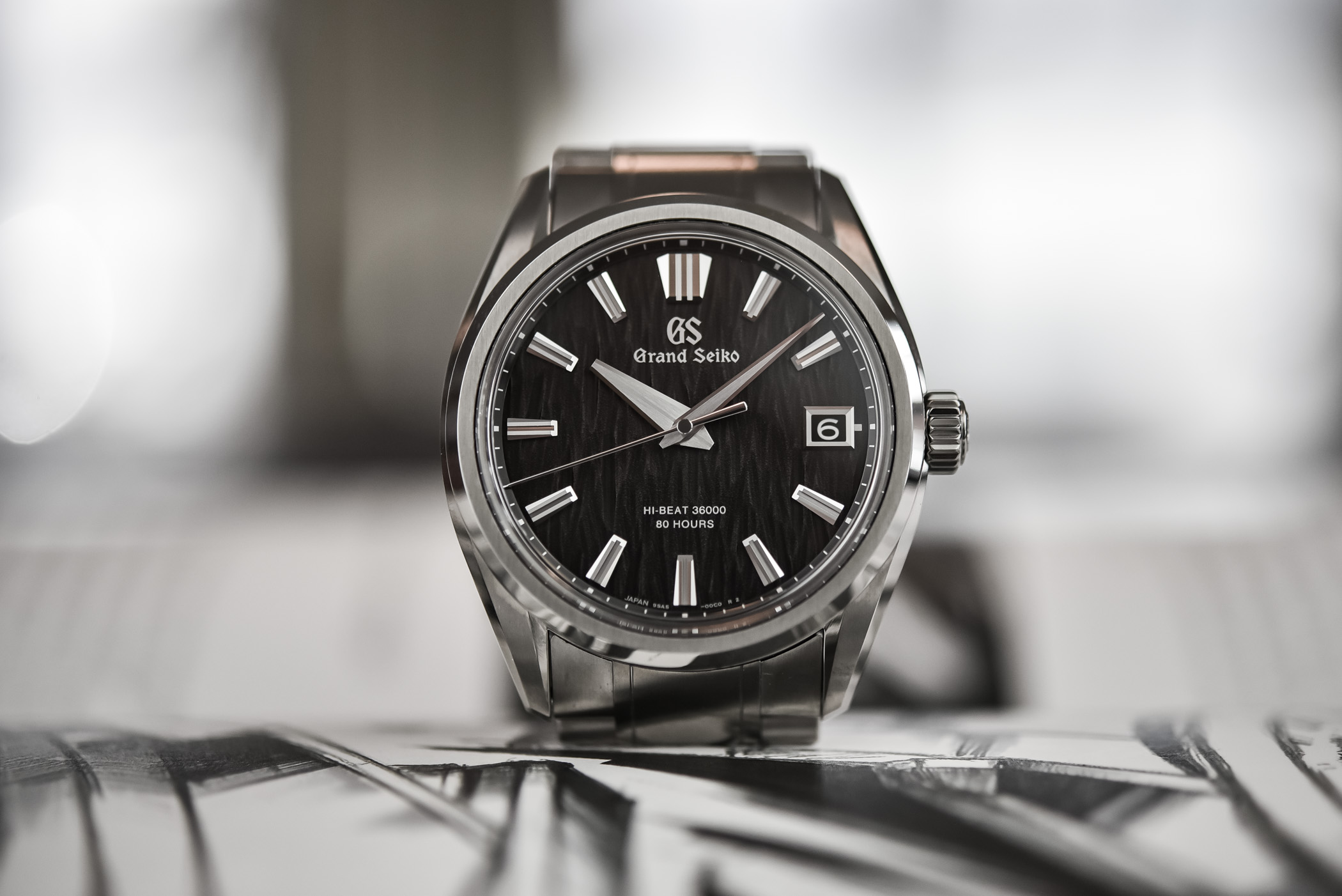 Yet, if the design and proportions have been retained, the use of titanium on this Night Birch SLGH017 implies two important changes. First of all, the weight of the watch has been drastically reduced, since titanium is about 30% lighter than steel. Thus, when a Green Birch is given for 178 grams overall, you can expect this titanium Birch to be about 135 grams (which we couldn’t measure during our short session with the watch). The difference is significant and adds greatly to the comfort of the watch. On the other hand, some collectors prefer the heft of steel on the wrist. The other difference lies in the colour. Slightly colder, a bit duller, it has a different brilliance that matches greatly with the black dial. 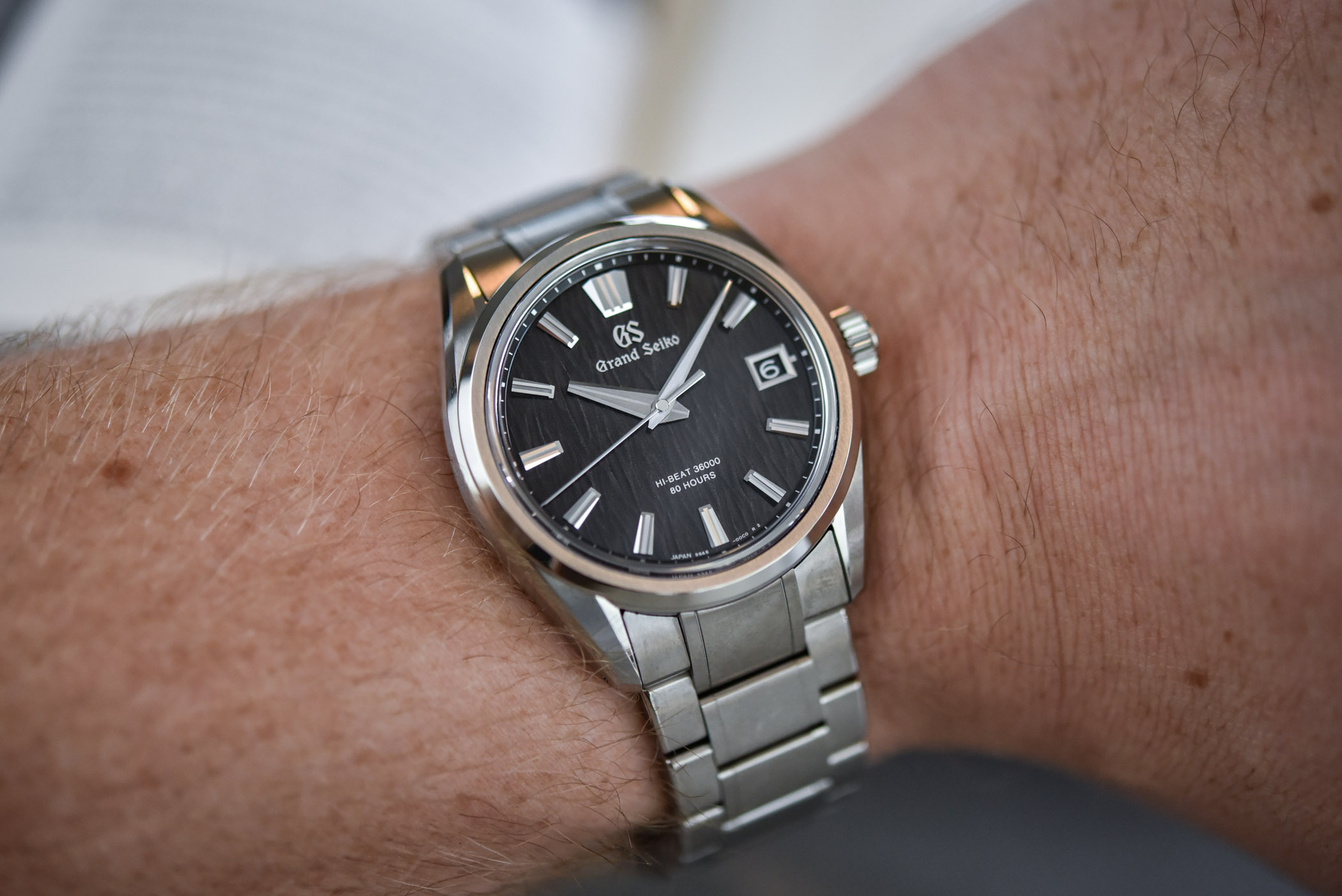 The same material is used for the 22mm 3-link bracelet, which is once again combining brushed surfaces and polished accents. It is closed by a folding clasp, which still doesn’t feature a micro-adjustment system. The large bracelet might not be to everyone’s taste, but it brings great stability on a daily basis. 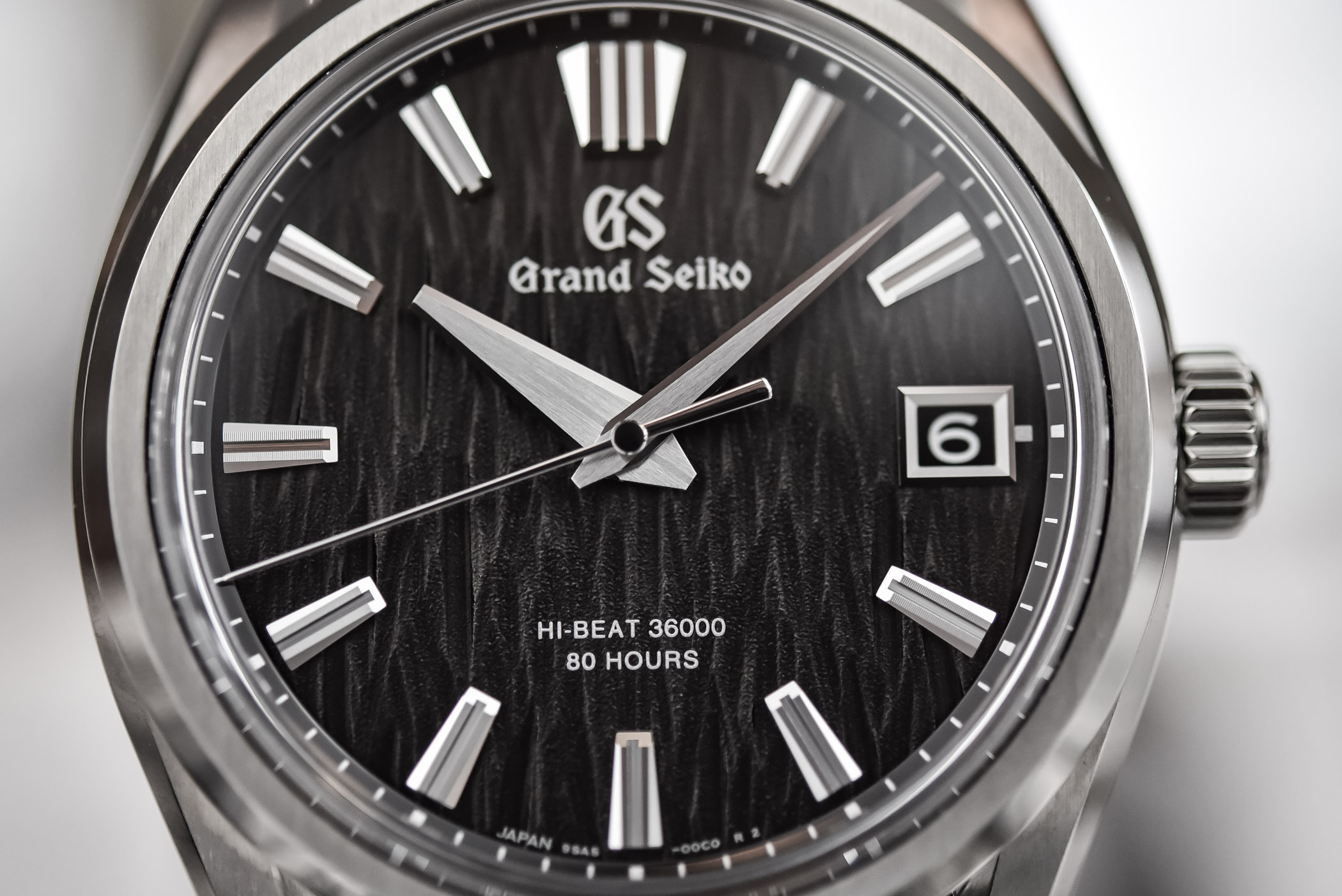 The second strong evolution is indicated by the name of this SLGH017, and that is the colour of the dial. Nigth Birch refers to both the new black colour of the dial and, of course, the signature texture that has first been seen last year on the White Birch. As with the green model, and even though the process and pattern are entirely the same as the silvery-white model, the final execution feels more discreet and more refined. The texture appears, and only due to the different colour, less pronounced, less rough. And since the black tone chosen is matte and doesn’t have the same shimmering effect as the SLGH005, the whole dial is more subtle, or less striking depending on how you like the White Birch. If you want to know exactly how this type of dial is produced, check this in-depth article here.

The rest of the dial is otherwise identical to the Green Birch, and thus a bit different from the White Birch. The applied markers, which are here highly contrasting with the dark background, have a striated texture on top, and highly polished bevels on the sides. In the same vein, the hands are brushed on the flat surface, which contrasts with the polished accents on the edges. Remember that the White Birch has fully polished hands and markers. Another small difference is the central seconds hand, which is untreated steel and now features a small cap over the stem – then again, identical to the green version, and different from the white version. The framed date window is still visible at 3 o’clock. 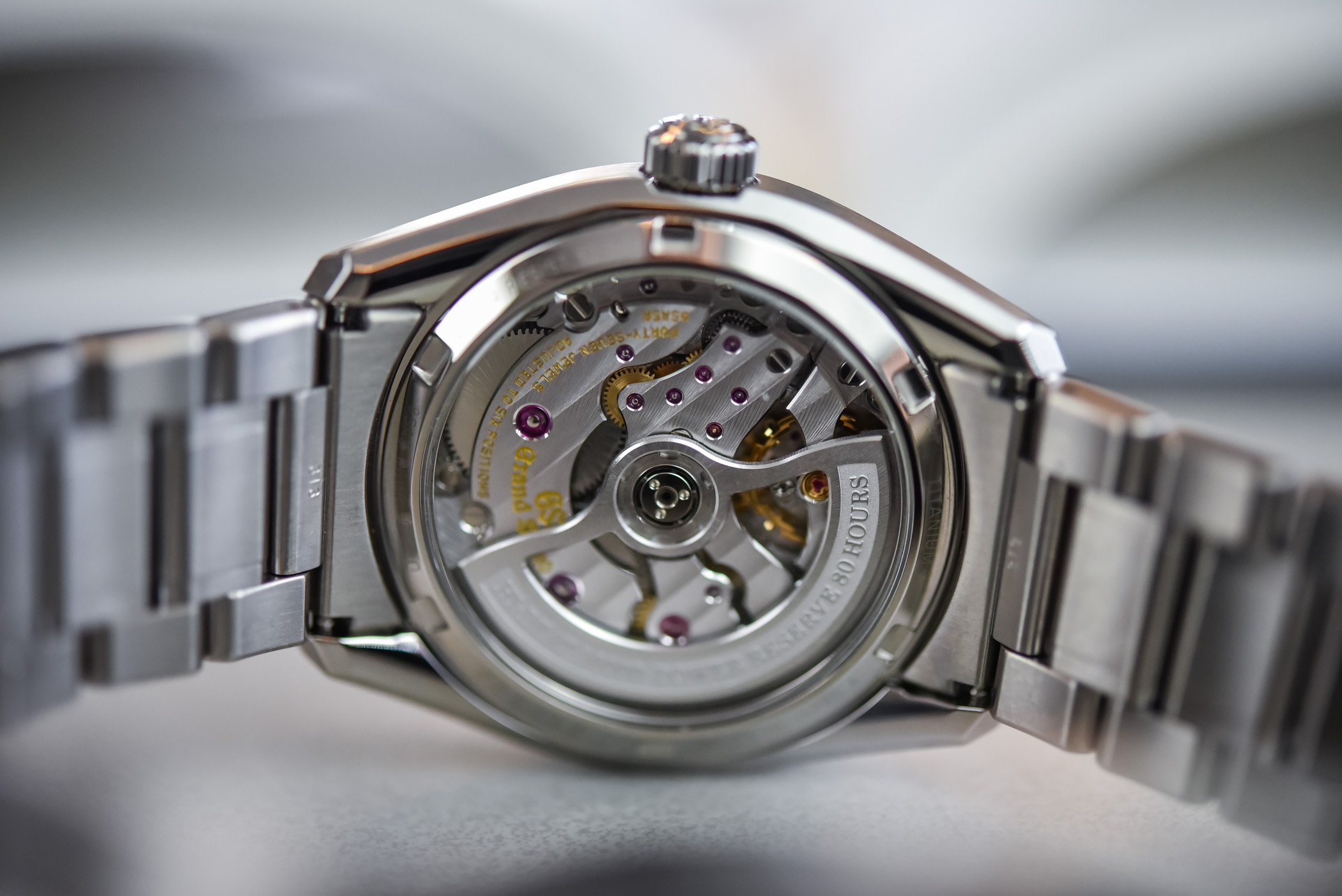 Under the caseback is the in-house automatic Calibre 9SA5. A modern and innovative movement, it relies on a 5Hz (36,000vph) high-frequency escapement geometry named Dual Impulse Escapement, working in conjunction with a free-sprung balance. The benefits are more precision, better shock resistance and more efficiency. The overall architecture of the movement is contemporary, with a thinner profile and two barrels for an 80h power reserve. The movement is rated for +5 to -3 seconds per day. Finally, the decoration is more refined than in the past GS collections, more charming too with beautifully designed bridges, thin stripes, bevelled edges… More can be read on this movement in this in-depth article. 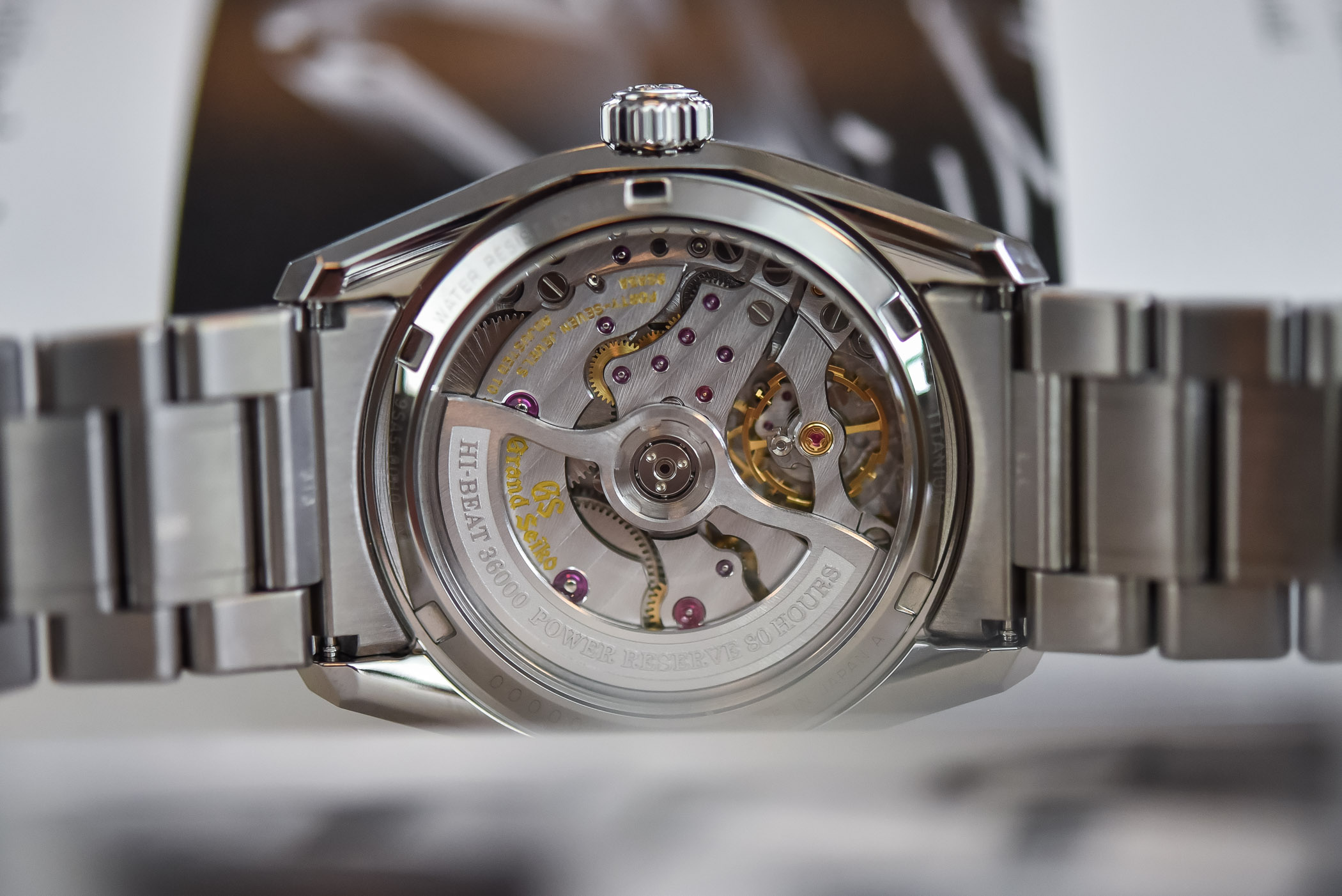 Grand Seiko Evolution 9 Hi-Beat SLGH017 Night Birch in titanium will soon be released as part of the permanent collection, and won’t be limited. The price will be EUR 10,500, which is 1,000 euros more than the other models in stainless steel. For more details, please visit www.grand-seiko.com.