Looking at Grand Seiko‘s collection, there is one watch that has always been one of our favourites here at MONOCHROME, a discreet piece that can be seen as the Japanese Calatrava, a watch that is there to last, the disarmingly simple Hand-Wound SBGW231. Compact, elegant, simple yet detailed, equipped with a great movement, it is the best “sleeper” in the brand’s collection. And we know for a fact that Grand Seiko’s Europe President, Frédéric Bondoux, shares the same feelings. So when he took the decision to create watches exclusive to the Old Continent, this was the watch of choice in order to create these Grand Seiko Elegance European Editions SBGW267 & SBGW269, with dials that are (of course) inspired by Japanese culture.

Behind most Grand Seiko creations there is a genuine Japanese influence, and not only in the manufacturing process. Most of the brand’s watches are influenced by the local nature, the architecture or classic elements of the Nippon culture. And these new watches made only for the European market are no exception to the rule. If the base for these watches is well known, being the classic hand-wound dress watch reference SBGW231, the dials that have been developed for them is directly inspired by the brand’s Parisian flagship boutique, itself an immersing voyage to Japan.

The use of shadow and light is an important element in Japanese architecture, where the beauty of shade is celebrated in its spaces and corners. Because of the Island’s specific climate, Japanese buildings, which are often made of wood, would not last long enough if exposed directly to the elements. Therefore, roofs were built to cover them completely, with overhanging eaves of up to two to three meters. As a result, only light entering horizontally under the eaves could illuminate the interior and many areas within these buildings were necessarily in shade. To counteract this effect, a central element in Japanese architecture is the shōji, a moveable paper screen that is placed where it can diffuse light to maximum artistic effect. The shōji is made by covering a wooden lattice with a traditional Japanese paper called washi and is used for windows, doors and even exterior walls.

At the centre of these new Grand Seiko Elegance European Editions SBGW267 & SBGW269 is a dial texture, which is directly inspired by the texture of the shōji paper, with a graphic pattern that animates the dial. True to the brand’s motto, “Nature of Time”, the two watches feature this texture, however, applied on two very different colours, resulting in watches that couldn’t be more opposite. 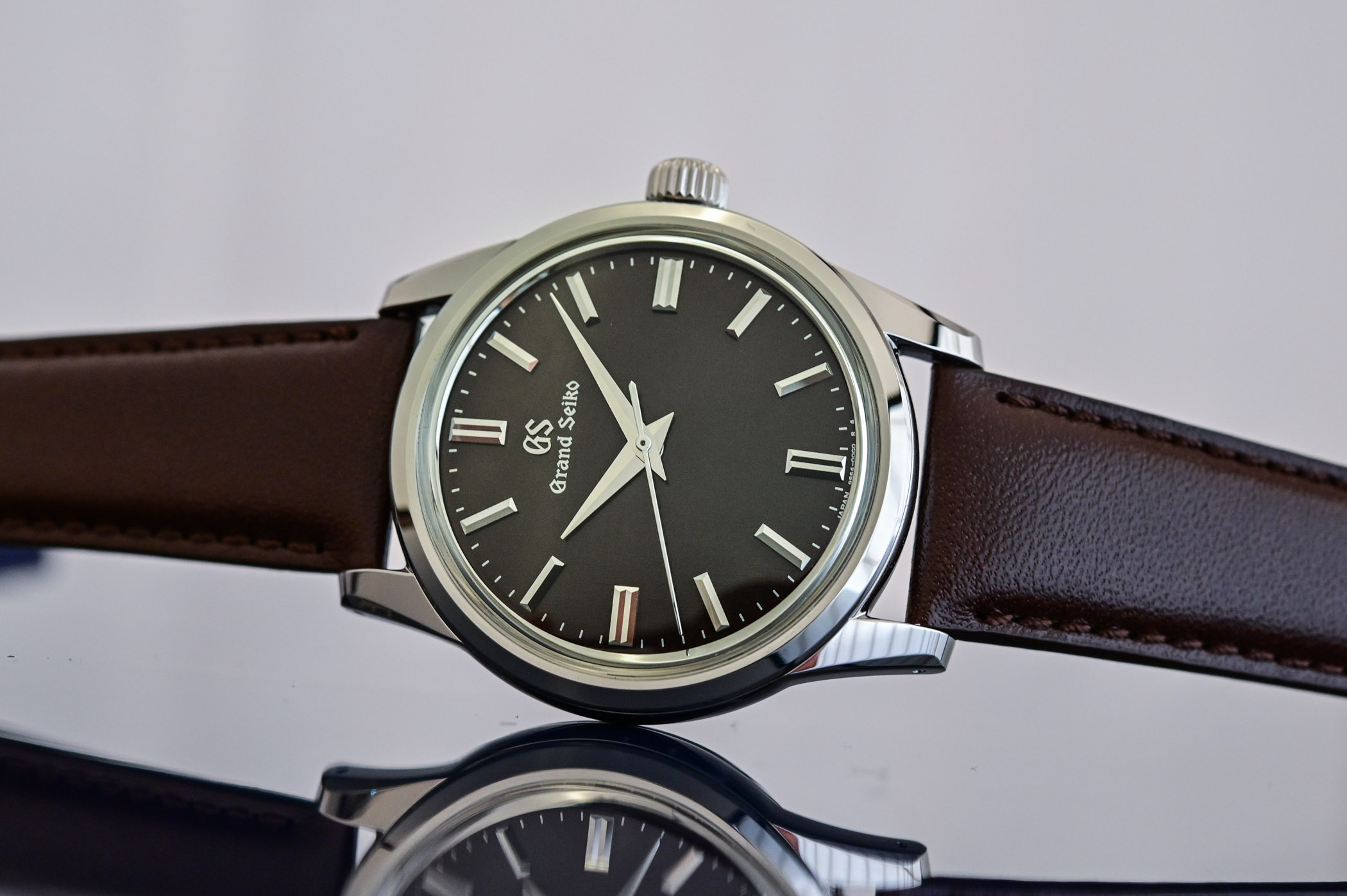 The first of the two models, the SBGW269, is a reference to Yukage, “the faint orange light of dusk that the shōji absorbs, filling the room with warmth.” It thus has a dark brown colour that contrasts well with the highly polished elements of the dial. This colour is rather hard to capture in the metal. The other model, the SBGW267, is bright and refers to Asakage, “the dazzling morning sunlight that is absorbed by the shōji and softly illuminates the entire room.” And that means a warm silver colour that reveals the fibre-rich texture of the shōji pattern. 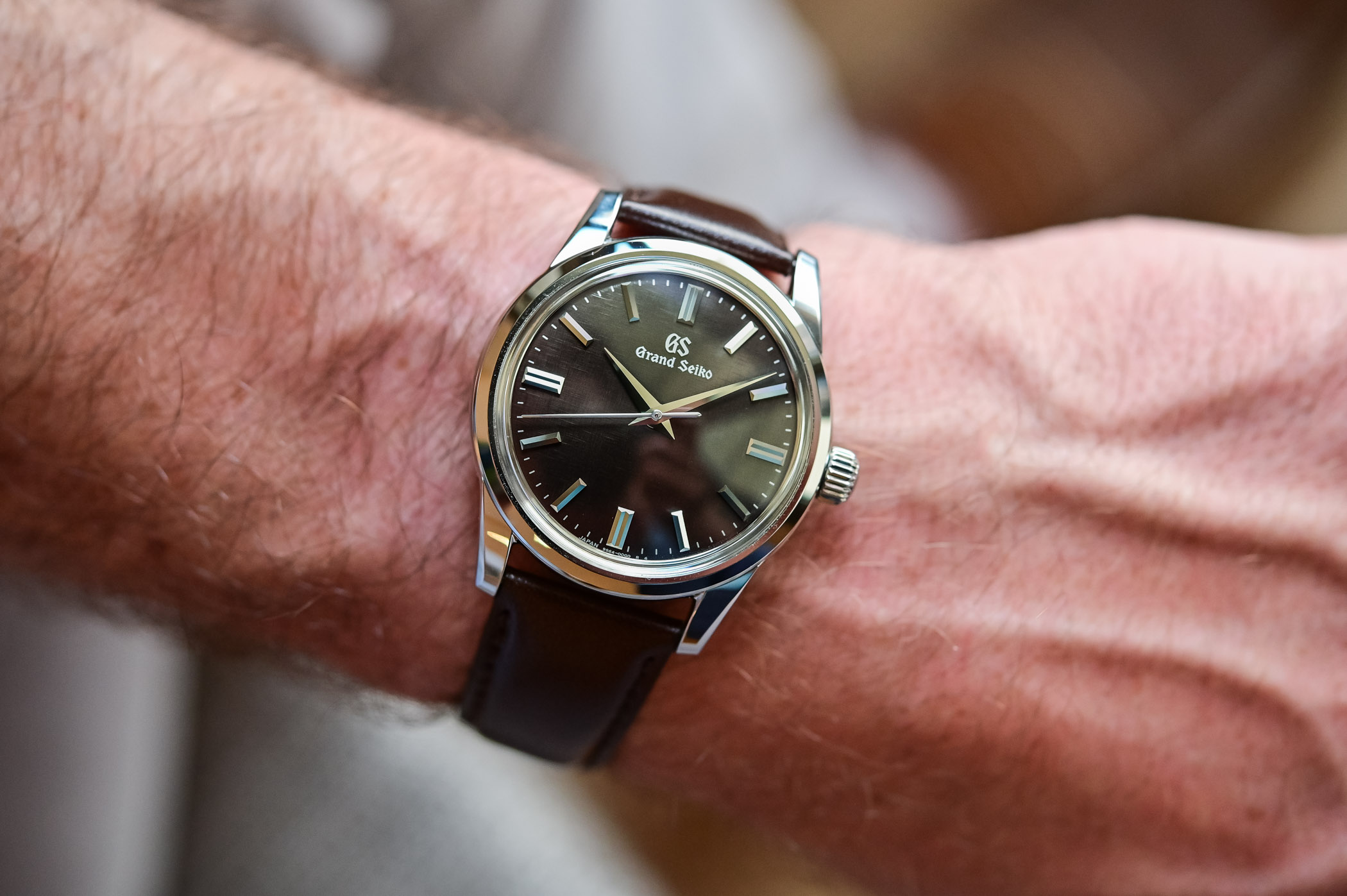 On both the SBGW267 and SBGW269, the dial is curved and thus creates a slight gradient effect – which is only a play of light and not the result of a dégradé colour. To make these models slightly more attractive, slightly less classic than the SBGW231, the brand has decided to opt for a casual-looking strap in calf leather, instead of the too strict black alligator strap found on the base model.

Excluding these elements of design from the equation, the Grand Seiko Elegance European Editions SBGW267 and SBGW269 are entirely identical to the model found in the permanent collection. And we’re certainly pleased with this decision. As said, the SBGW231 that served as a base is a watch that needs attention, being a true sleeper in the collection, but a watch that has a lot to offer. 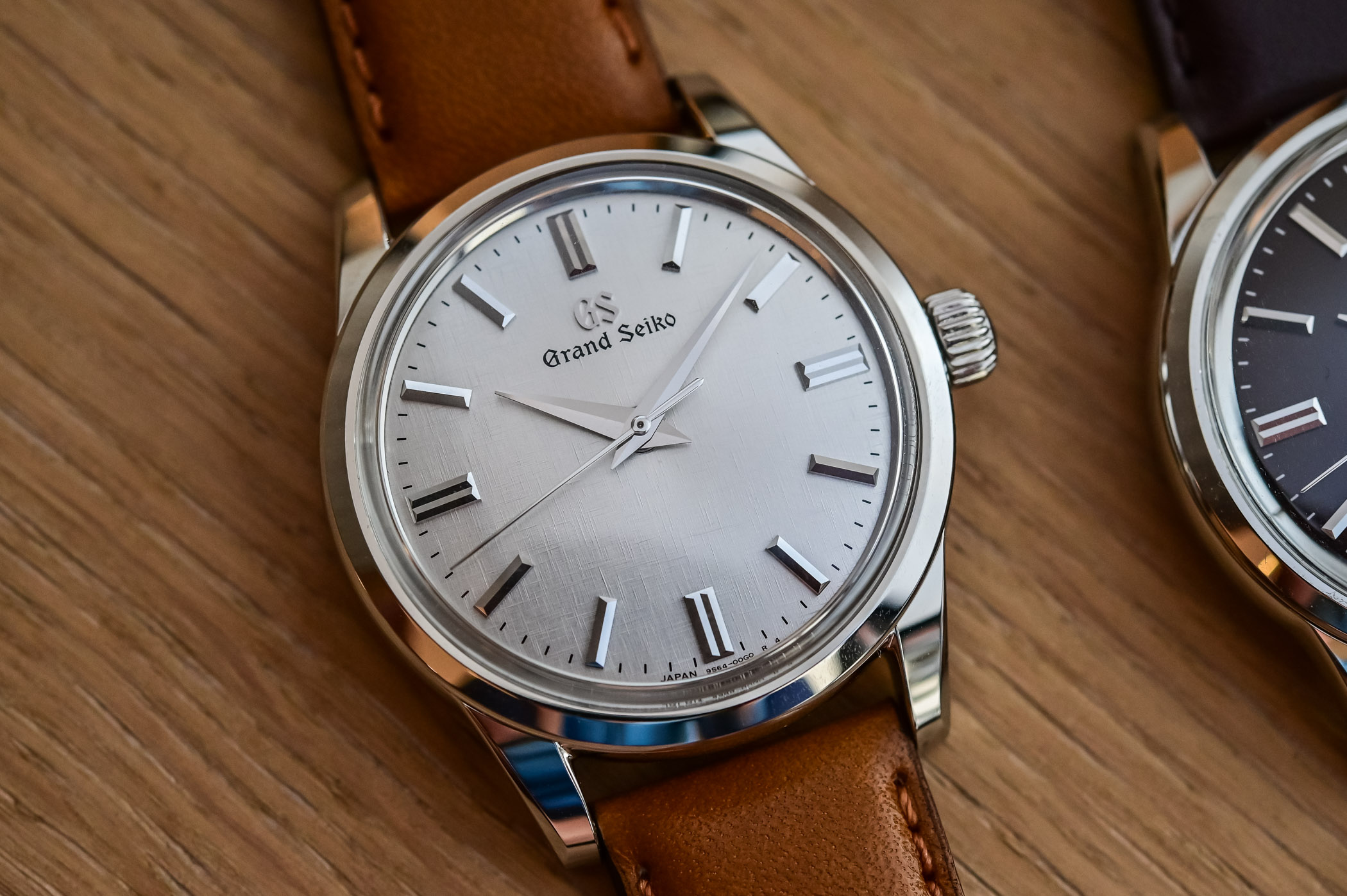 For instance, it is a compact and elegant watch, yet not an overly slim and “tuxedo-like” piece either. It has charm and distinctive elements. The case is only 37.3mm in diameter, with a height of 11.6mm. Its design is elegant and yet some elements are there to remind you that behind each GS watch, there’s great attention to detail. The bezel is slightly angled, the lugs are short and quite strong, yet they feature some nice bevels on each side – in the same vein as the GMT SBGM221 – and the case combines sharp angles with rounded surfaces, which only makes the distortion-free polishing of the case more attractive.

Typical of Grand Seiko’s production, the dials feature ultra-sharp, faceted and perfectly polished hands and applied indexes, which participate in the very pleasant daytime legibility. There’s also a finely executed applied GS logo, and… that’s all. No date, no mention of a jewel count, of a winding typology. Just a pure dial focused on its colour and texture. 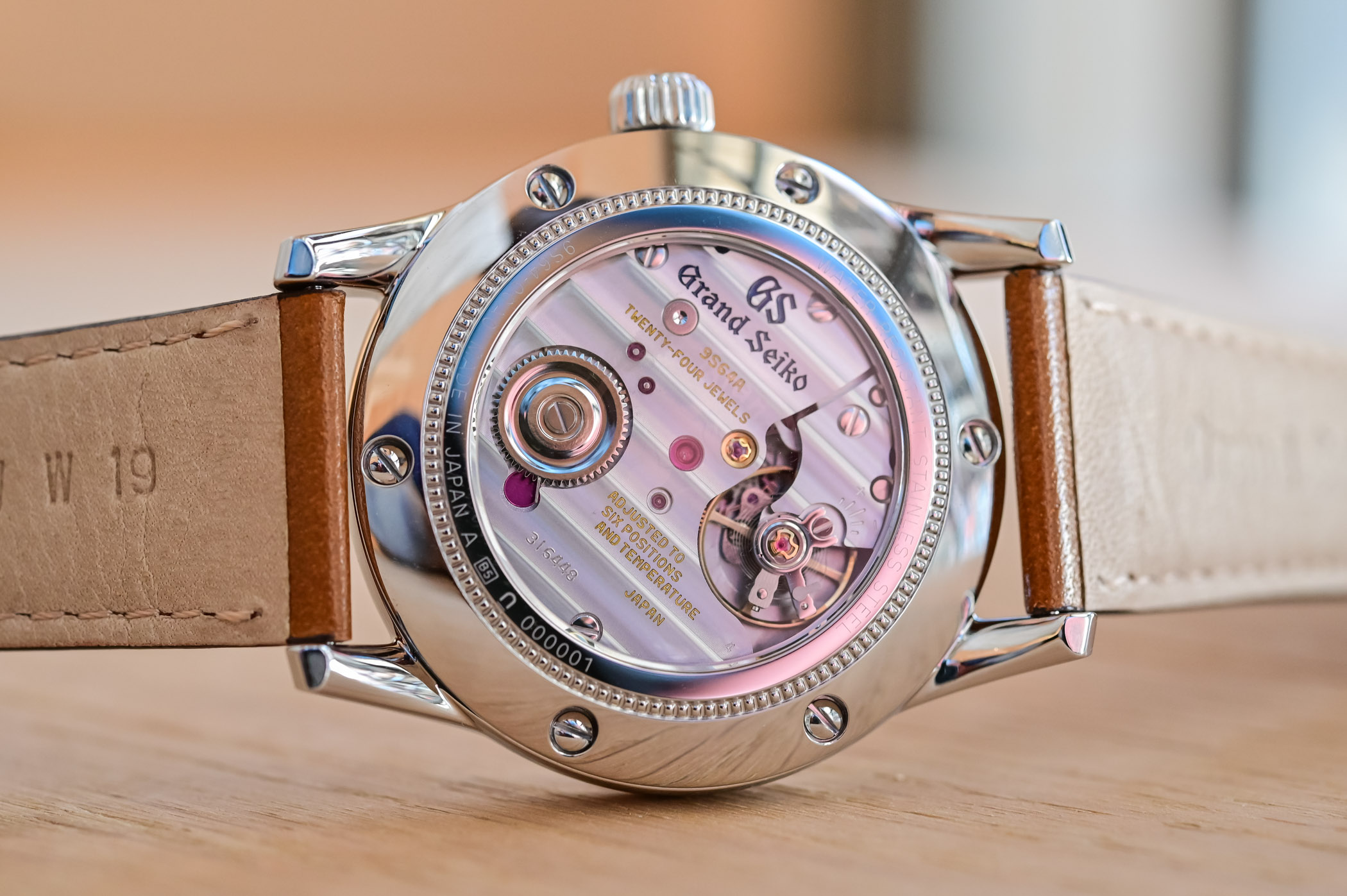 Under the sapphire caseback is the Grand Seiko manufacture calibre 9S64, a slim hand-wound movement introduced into the Grand Seiko line in 2011. One of the few manual-wind movements at GS, it honours its 1960 predecessor (equipped with calibre 3180, a manual-winding, 25 jewels, chronometer-grade movement). The movement is capable of delivering a 3-day (72h) power reserve thanks to a thinner and longer mainspring made of Seiko’s proprietary alloy. These watches are adjusted in 6 positions and timekeeping precision is -3 to +5 seconds per day. It also features a stop-seconds function. The bridges are decorated with Grand Seiko stripes, known for strongly playing with the ambient light.

The Grand Seiko Elegance SBGW267 & SBGW269 will be available as Europe-only editions at the Grand Seiko Boutiques and retail stores in Europe in October 2021. They will be priced at EUR 4,800 and won’t be limited in production.